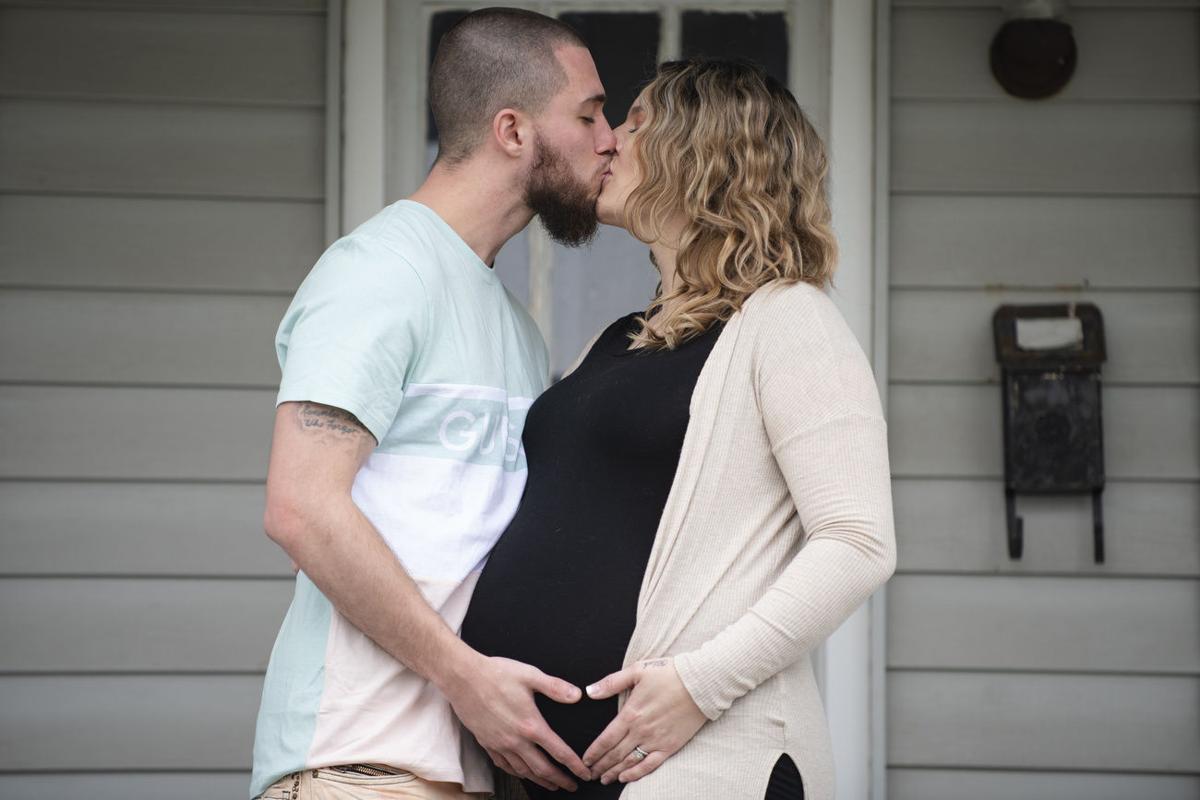 Drew and Kelsey Schroy kiss on the front porch of their home in Watertown on Friday. Emil Lippe/Watertown Daily Times 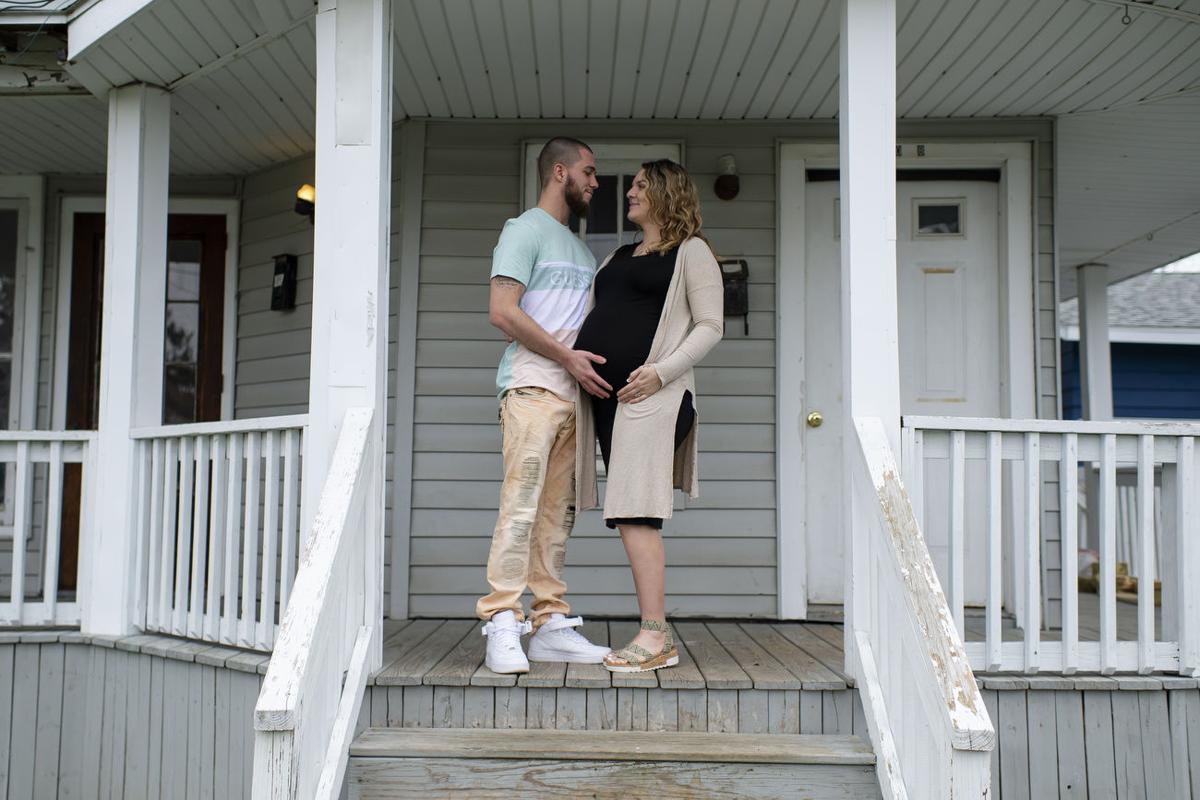 Drew and Kelsey Schroy gaze into each other’s eyes on the porch of their home in Watertown on Friday. Kelsey is expecting to deliver their first baby next Wednesday. Emil Lippe/Watertown Daily Times 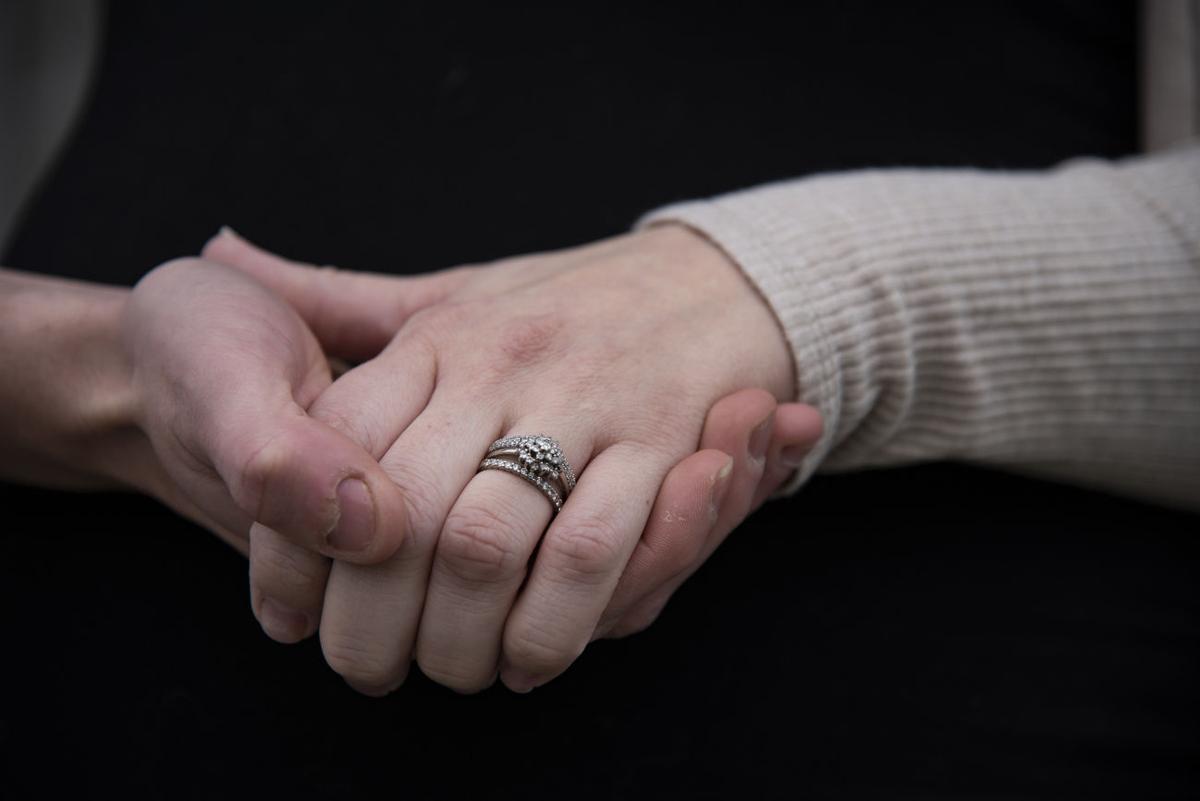 Drew Schroy holds the hand of his wife Kelsey on the front porch of their home in Watertown on Friday. Emil Lippe/Watertown Daily Times 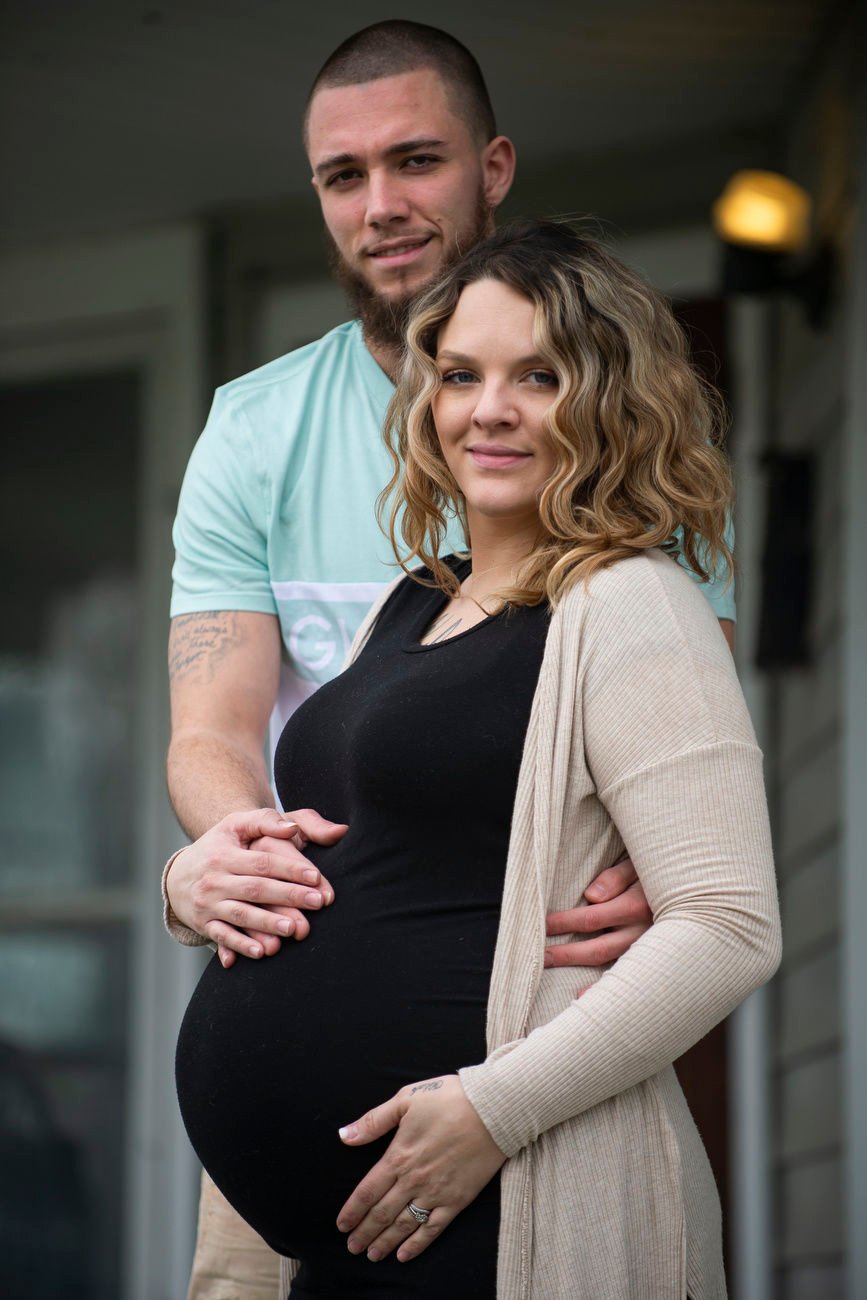 Drew and Kelsey Schroy stand on the steps of their front porch in Watertown on Friday. Emil Lippe/Watertown Daily Times

Drew and Kelsey Schroy kiss on the front porch of their home in Watertown on Friday. Emil Lippe/Watertown Daily Times

Drew and Kelsey Schroy gaze into each other’s eyes on the porch of their home in Watertown on Friday. Kelsey is expecting to deliver their first baby next Wednesday. Emil Lippe/Watertown Daily Times

WATERTOWN — Kelsey and Drew Shroy got married on Thursday afternoon while sitting on their living room couch while their dog wanted some attention.

Wedding ceremonies like theirs will become more of the norm during the age of the coronavirus. The couple was the first to tie the knot through a marriage ceremony by the City Clerk’s office.

“The world is in chaos,” Mrs. Schroy said. “But we’ve got a lot of nice things going for us.”

On Saturday, Gov. Andrew M. Cuomo gave the OK for couples to exchange their wedding vows digitally and to get marriage licenses during the coronavirus outbreak. City Clerk Ann M. Saunders said her office will offer the digital service to other couples while City Hall remains closed during the pandemic.

Mrs. Saunders called the couple on Wednesday to see if they’d be interested in being the first to use the digital wedding ceremony in Watertown.

But there was some urgency for the ceremony, too. Mrs. Schroy, 28, a student at Jefferson Community College’s chemical dependency program, is expecting their baby. Brooksen is due on Wednesday.

“We wanted to be married before we have the baby,” she said. “We have a lot going on.”

Their baby shower had to be canceled because of the virus, though.

The couple met through mutual friends about two years ago and fell in love right away.

The wedding ceremony was put together quickly by the clerk’s office. The couple used a smart phone to connect with software on laptops in City Hall. Mrs. Saunders performed the ceremony that took about 20 minutes, while deputy clerk Lisa Carr was the only guest and served as a witness for the couple.

“With so much going on in the world, we were happy to do it,” Mrs. Saunders said. “We’re happy to be a part of something positive.”

The couple sat on their couch, with their 6-month-old pitbull mix, Calvin, sitting on their laps to join in the special occasion.

When the groom tried to put her wedding ring on, Calvin started playing with the bride’s hand. Of course, at the end, the groom, also a JCC student who works for his father’s construction business, kissed his bride.

“They were a cute couple,” Mrs. Saunders said.

The bride and groom didn’t call family about their quick wedding plans. She told a couple of friends after the fact. But everyone knew that they wanted to get married anyway.

Afterward, they had a quiet night — at home, of course. Social distancing will prevent their friends and family from congratulating them right now.

They were just happy to exchange their vows. Mrs. Schroy planned to make Fettuccine Alfredo, her husband’s favorite dish, for dinner.

The Schroys were among eight couples who already had marriage licenses from the clerk’s office but had not had the chance to go through with the ceremonies before City Hall closed on March 17 because of the virus.

Now, Mrs. Saunders will see if any of the other couples want to get married digitally. She hopes to work out the details for again arranging for marriage licenses sometime next week.

On the day that City Hall closed, her office performed the last two wedding ceremonies until the Schroys tied the knot on Thursday.