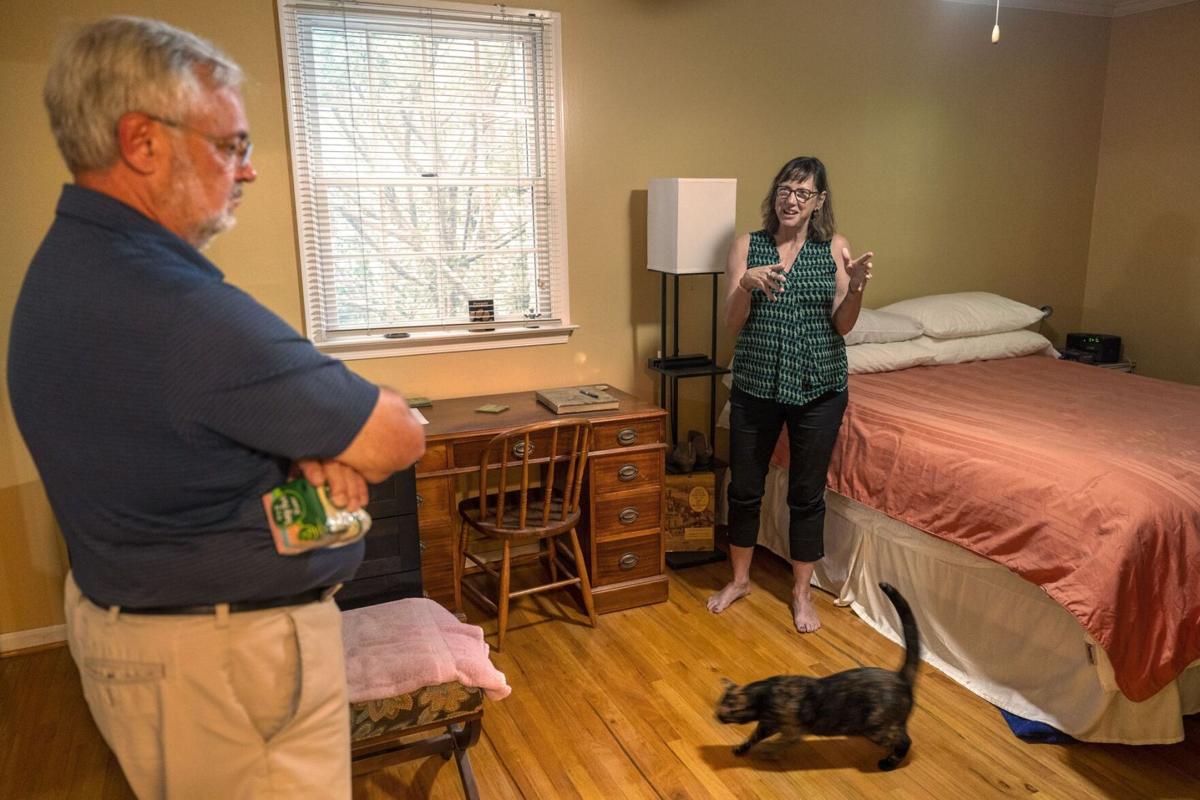 John Kelly and Christina Kimball-Kelly, and their cat, Luna, in their son’s old bedroom in their Springfield, Delaware County home on Sept. 15. Tom Gralish/The Philadelphia Inquirer/TNS 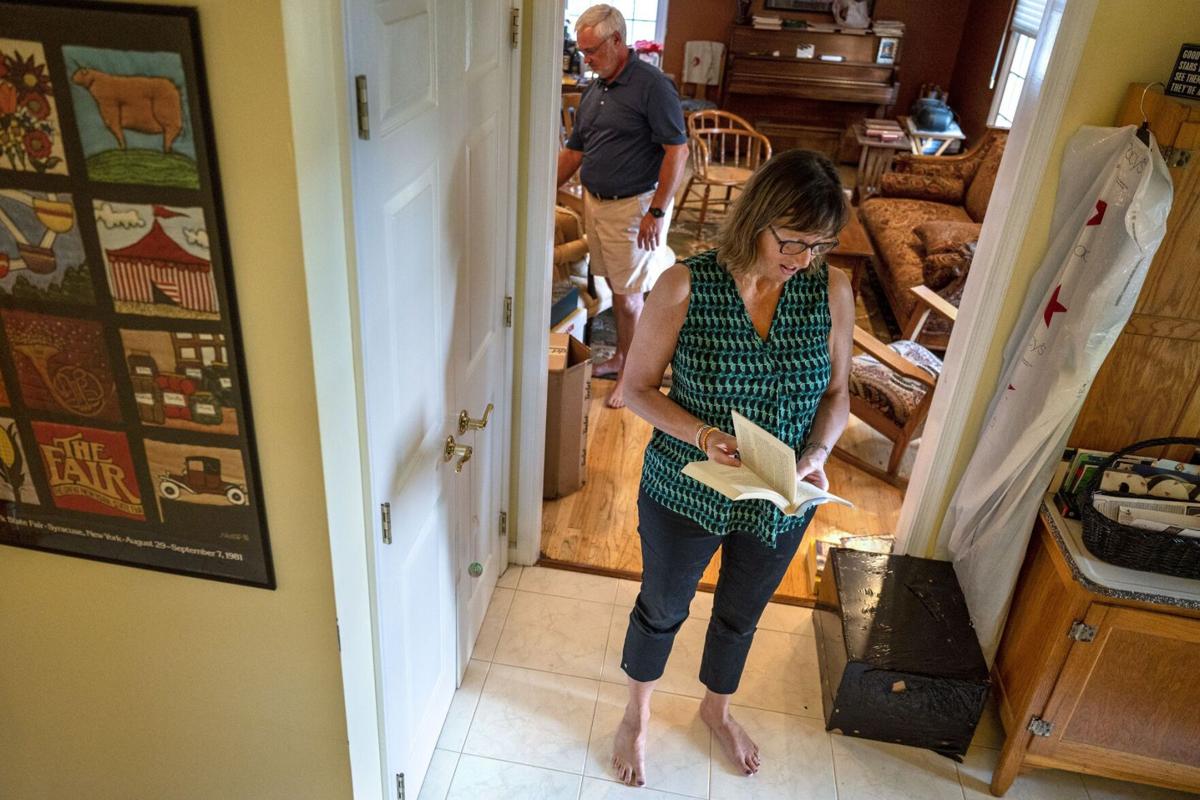 Christina Kimball-Kelly reads from a favorite Virginia Woolf book, which belonged to her son, with husband John Kelly at their Springfield, Pa., home on Sept.15. The couple wants to give their son’s belongings to an Afghan family setting its first shallow roots in the U.S. Tom Gralish/Philadelphia Inquirer/TNS 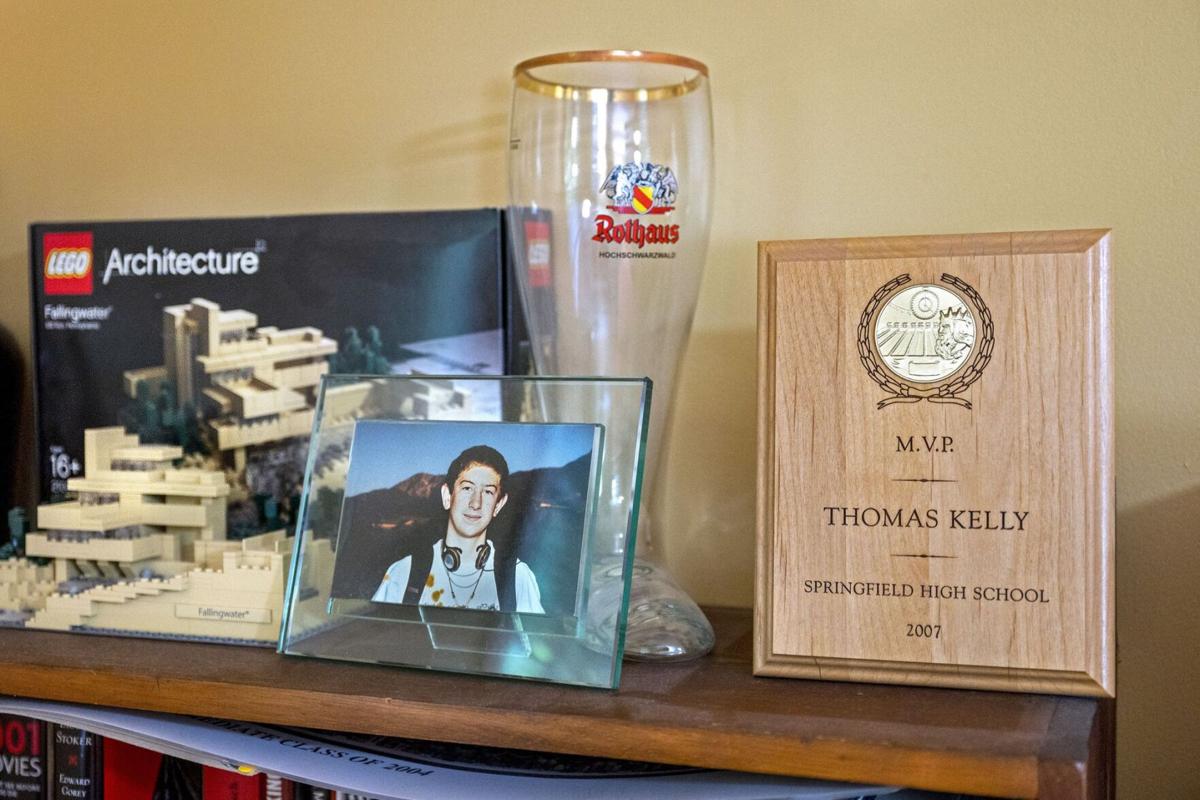 John Kelly and Christina Kimball-Kelly, and their cat, Luna, in their son’s old bedroom in their Springfield, Delaware County home on Sept. 15. Tom Gralish/The Philadelphia Inquirer/TNS

Christina Kimball-Kelly reads from a favorite Virginia Woolf book, which belonged to her son, with husband John Kelly at their Springfield, Pa., home on Sept.15. The couple wants to give their son’s belongings to an Afghan family setting its first shallow roots in the U.S. Tom Gralish/Philadelphia Inquirer/TNS

PHILADELPHIA — John Kelly and his wife, Christina, had held on to their son’s childhood belongings, his Lego blocks and Beanie Babies, thinking that if they ever became grandparents, the kids might like to play with their father’s old toys.

That “someday” vanished in November, gone with their only child, Thomas, age 30.

His dresser, bed, and desk, left behind when he moved into a place of his own, are upstairs in the couple’s Delaware County, Pa., home, along with a bookcase crammed with works in the languages he mastered, French, German, Spanish, and Arabic.

They wondered what to do with it all. But as the couple saw the news of thousands of Afghans stepping off of evacuation flights at Philadelphia International Airport, they knew who should have their son’s belongings.

“He would have chosen it to go to them,” Christina Kimball-Kelly said.

She and John have begun checking where they might donate, including the large Philadelphia agencies involved in the resettlement of Afghanistan evacuees, and the smaller, nonprofit partners that often have more space to gather and store goods.

It’s a personal gesture offered amid a national undertaking, the largest resettlement effort since the end of the Vietnam War. In coming months the Biden administration intends to vet and resettle tens of thousands of Afghans who fled as the Taliban took over the country.

Humanitarian agencies say Congress will need to provide billions of dollars in funding, even as businesses and nonprofits step forward.

Thomas’ parents say his belongings don’t need to be kept together, preserved as a collection. His life was not a museum. It was an exploration, one that filled the pages of two passports with stamps that marked arrivals and departures.

An Afghan family that needs a bed could take that. Another might need clothes. Maybe another has children who would like a jigsaw puzzle, or want a small stuffed creature to cuddle as they set roots in the United States.

“We had a son who had a love of language, a love of people, a love of different nationalities,” said John Kelly. “How do we best put the spirit of him out there, for people who don’t have anything?”

He is a salesman for a company that makes specialized spray nozzles. Christina, 62, teaches French at Strath Haven High School.

They live in Springfield Township, where Thomas competed on the high school swim team.

He planned to become a doctor but surrendered the idea in 11th grade, weighing the reality of a decade of medical training and the certainty of vast debt.

He spent his senior year in Germany, after winning an exchange-student scholarship. At New York University he immersed himself in the city, teaching students at Fluent Manhattan and, while working at the gift shop at The Standard hotel, directing visitors to his favorite off-the-path places.

He lived and studied in Paris and in Amman, Jordan, as a junior. And a couple of years after graduating from NYU in 2012, he moved to Berlin.

In Berlin he found friends like himself, polyglots — German, Romanian, and Tunisian — young people who loved to write and think and share.

Always, books were at hand, poetry and politics and literature in five languages, with passages underlined and notes written in the margins. He collected copies of The Little Prince in different tongues. He read and then reread Infinite Jest, known for its length and difficulty, a novel where even the endnotes have footnotes.

“He didn’t sit and watch TV,” his father said. “He was always reading or going somewhere.”

Thomas’ affinity for words and languages seemed familiar. His mother is qualified to teach Spanish as well as French. And his grandfather was the longtime sports information director at Syracuse University, revered in college circles as “the Dean.” But depression ran in the family too.

In his senior year of high school, Thomas had been diagnosed with bipolar disorder, which is characterized by intense, distinct emotional states of happiness and sadness.

He hated taking medicine, saying it left him unable to experience any emotion at all.

Life could be a struggle. At times he was in terrible pain.

In Berlin he worked for the branding firm Realgestalt — think, real gestalt — handling translations for corporate clients that included Daimler AG, the big automotive firm. The company is involved in all sorts of strategic communications, and Thomas loved it there.

But he was laid off last year as the coronavirus pandemic took hold, and Germany slid into a hard and protracted lockdown. The closing of the local pool kept him from the water that offered exercise and rejuvenation.

He insisted on making his own way even as he struggled. Moving home would have seemed like defeat.

That summer a close friend approached Thomas with a tender, life-altering proposal. What if they were to have a child together? They could co-parent, not as lovers, but as adored companions, raising a son or daughter.

Thomas said yes. Then no.

“I don’t want to risk passing this on,” he said.

The phone rang in Springfield on a Monday evening. Christina answered. A friend of her son on the line. Thomas had left a detailed list of contacts, and a note that said, “It was mostly a beautiful life.”

Some of his possessions are being shipped from Germany. Books, of course. Pictures. An Armani catalog — Thomas modeled but never mentioned it, instead marking the pages where his photo appeared, so his parents could see.

They and his friends held a memorial service in Berlin’s Tempelhof park, not far from where President Kennedy delivered his famous “Ich bin ein Berliner” speech. When showing friends the city, Thomas could discern the old, Cold War dividing line between East and West Germany simply by examining the architecture.

In his Berlin apartment, his mother and father found two coffee mugs, made in Germany, inscribed with a passage from The Little Prince: “My star will just be one of the stars, for you. And so you will love to watch all the stars in the heavens ...”

His ashes sit on the fireplace hearth.

It’s hard for his parents to sort their son’s belongings. Everything seems to transport them back to his youth.

But they know that people could use these goods. And that Thomas would want that, would want to help people trying to navigate a new life in a strange place.

“He would be so happy,” his mother said.