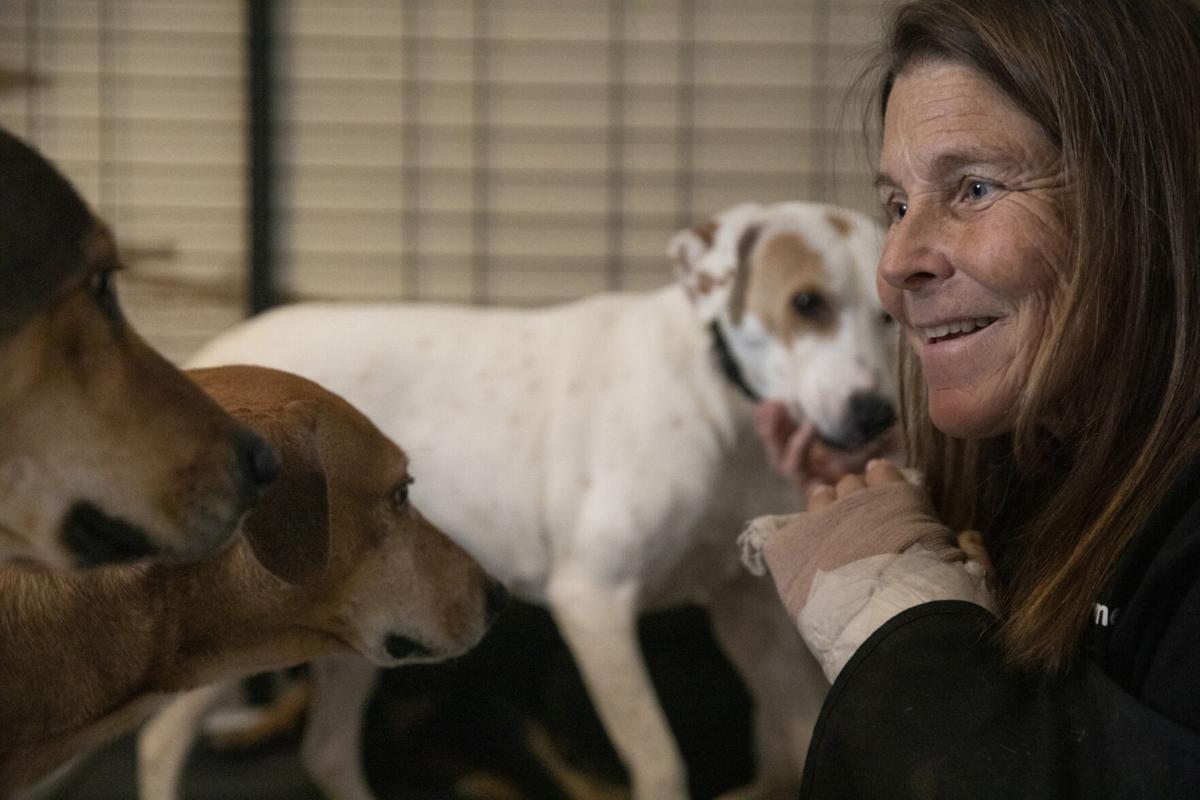 Babs Fry pets dogs who are in a room that’s meant for socializing, on Wednesday, Jan. 5 in Jamul, Calif. Fry helps people find their runaway dogs after experiencing her own pet running away. She has launched a nonprofit called A Way Home For Dogs. Ana Ramirez/The San Diego Union-Tribune/TNS 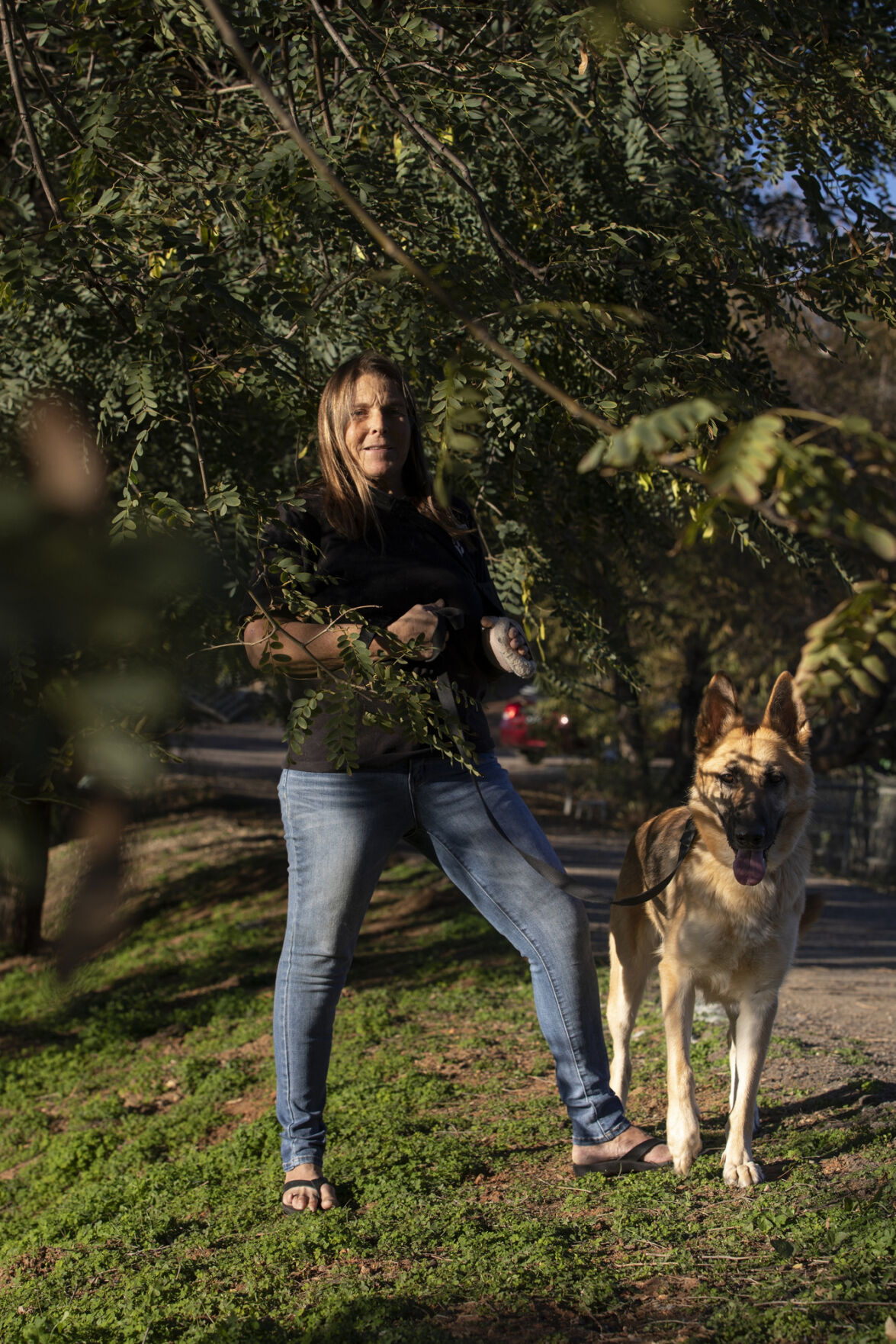 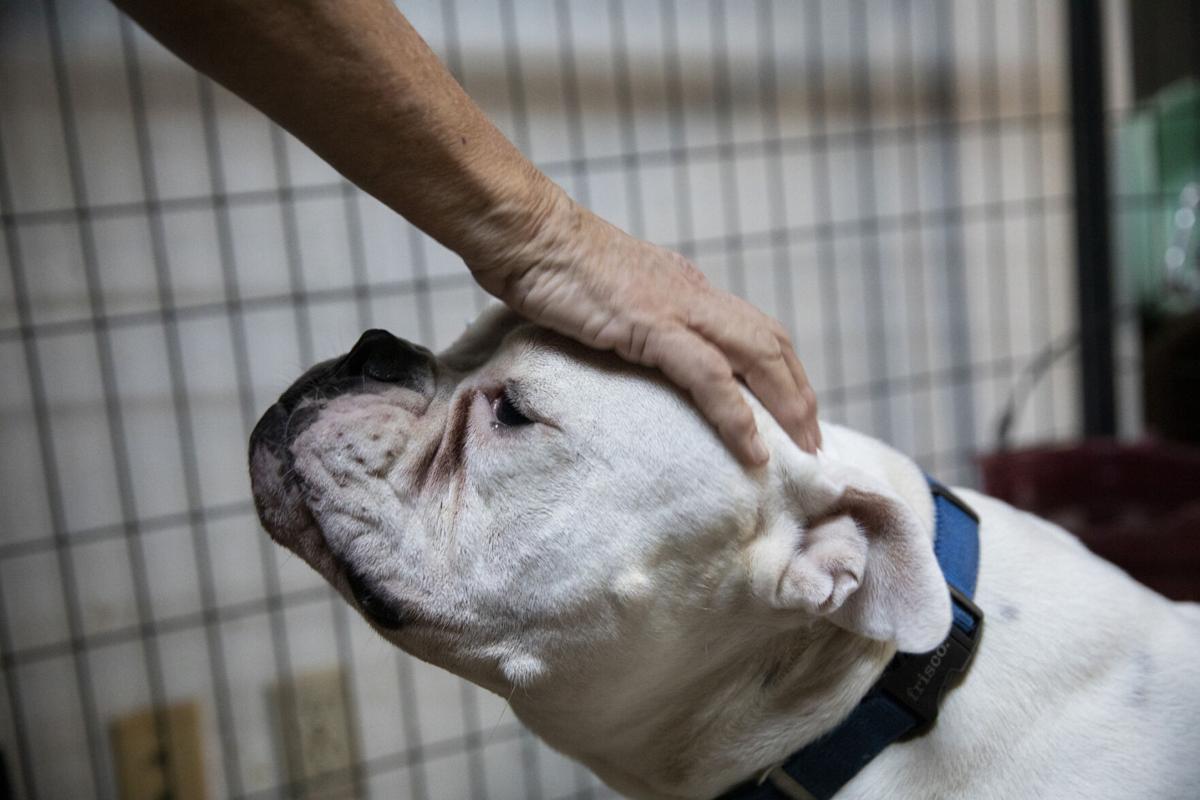 Babs Fry pets dogs who are in a room that’s meant for socializing, on Wednesday, Jan. 5 in Jamul, Calif. Fry helps people find their runaway dogs after experiencing her own pet running away. She has launched a nonprofit called A Way Home For Dogs. Ana Ramirez/The San Diego Union-Tribune/TNS

JAMUL, Calif. — Seven years ago, Babs Fry was devastated when a pregnant terrier mix dog she was fostering at her Jamul ranch disappeared without a trace.

Then she got an email from a professional pet tracker offering some unusual dog recovery tips that blew Fry’s mind.

“I lost a dog and was very fearful and didn’t think anyone would be able to catch her. Then I got a call from this woman and I thought she was crazy. But sure enough, 10 days later that dog was in a trap in my driveway.”

That was the beginning of a major life shift for Fry, a longtime Realtor who now dedicates all of her energies to her new nonprofit A Way Home for Dogs. The organization provides free tracking and recovery advice and services to find lost family dogs, as well as strays.

Since she started training as a tracker and trapper seven years ago, Fry estimates she has helped in the recovery of hundreds, if not thousands, of dogs throughout Southern California and beyond. Her unconventional recovery advice has also been featured on the website of TV’s “Dog Whisperer” Cesar Millan and in The New York Post.

Fry jokes that she dedicates “48 hours a day” to dog recovery, fielding up to 50 calls a day from pet owners seeking advice from as far away as Canada, Australia and England. She said she usually juggles about six cases at a time. On Fry’s Facebook page (facebook.com/awayhomefordogs), she posts videos and stories of successful recoveries at least two to three times a week. Peak recovery periods are after the Fourth of July and New Year’s Eve holidays, when fireworks spook many dogs to bolt.

Rita Rodriguez has been volunteering for Fry for the past four years. She helps care for the strays and rescued animals that Fry is rehabilitating and re-homing and she sometimes accompanies Fry on tracking missions. She said Fry goes above and beyond to help people, no matter the hours or the financial cost to herself.

“It’s not a job for her, it’s something she does 24/7. She takes calls in the middle the night,” Rodriguez said. “She is very committed to helping these animals. Babs has a big, beautiful heart. Her heart is real. That’s what I love about her.”

For about 90% of the cases she takes on, Fry speaks with pet owners only by phone to create a tailor-made recovery plan for their dog based on its individual breed, temperament, past behavior and how it became lost. For the other 10% of cases, Fry goes out in the field herself, often sleeping for days at a time in her truck and using field cameras, rotisserie chickens, clothing bearing familiar scents and humane trapping cages to recover dogs. Most of her recovery missions take three to five days, but some can take a month or more.

That was the case one year ago this week for a 1-year-old Vizsla named Penny, who escaped from a boarding facility in Valley Center while her owners, Mike and Mandy Colafrancesco of San Marcos, were out of town on vacation. The Colafrancescos were amazed by Fry’s tireless efforts on their behalf and her skill at tracking Penny down after she’d been missing for 34 days. The couple was also frustrated that Fry refused to accept any payment — even a canned drink or gas money — for her services. So instead, the Colafrancescos — Mike is a San Diego Fire captain and Mandy is an ER nurse for Palomar Health — repaid Penny’s rescuer by underwriting the cost and filing the paperwork for Fry’s new nonprofit (awayhomefordogs.com).

“She is a pretty incredible person but she has a hard time accepting people’s generosity,” Mike Colafrancesco said. “Our hope is that by having an official nonprofit, she can get donations and have something to build from so she can help others.”

Fry said she’s driven to track dogs because of her lifelong love for all animals.

“To tell you the truth, I’ve always gotten along better with animals than people,” Fry said. “I got involved in animal rescue as soon as I was old enough and when I discovered tracking I found out that I have a gift, a passion and a talent.”

Fry credits her expertise in dog recovery to two local experts in the field who offered to mentor her and allowed her to shadow them on their missions, Laura Ann Bidinger, who was the pet detective that tracked Fry’s terrier mix down, and Mike Noon.

Fry said the most important piece of advice she has for distraught pet owners is to battle their urge to go out searching for their dog. Contacting dog shelters, posting flyers and sharing photos and information on social media can alert an entire community for dog-sightings. Also, driving around looking for a dog will spread the owners’ scent around and could confuse a dog.

Fry also discourages people from using techniques they read about online for finding and capturing their dogs. She said chasing after or shouting at a frightened runaway dog could divert it from its journey home, and failing to use a trap cage properly usually ensures that a dog will never enter a cage the second time.

“Typically if it’s a human idea, it’s a bad idea,” Fry said. “We’re in fear for our dog’s life and we feel guilty that something has happened to them. And by the way, none of that is conducive to making your dog safe.”

Fry said that in order to track and trap a dog successfully, she has learned to think like a dog. Pet dogs will naturally try to make their way home by following a scent, but they travel as the crow flies, not by roads or sidewalks, so searching by car doesn’t work. Lost dogs are also caught up in a “fight or flight” mindset, so they’re likely to run away from everyone they see, including their owners.

She also urges dog owners not to lose hope. Dogs are animals and possess the instinct to survive, even in fierce storms, desert heat, icy conditions and without easy access to food and water. Predators like coyotes can be dangerous, but Fry said the longer a dog is lost in the wild, the more survival skills it will learn.

“They won’t starve to death. They’ll hunt, they’ll forage and they’ll eat roadkill,” she said. “They’re not biologically engineered to kick the bucket or die of dehydration.”

Colafrancesco said he and his wife were beginning to lose hope of ever seeing Penny again when Fry — who had been posting flyers, following leads and sleeping nights in her truck in Valley Center — picked up video of Penny on a field camera, 28 days after she’d gone missing. Five days later, Fry was able to lure Penny into a trap cage with a blanket inside bearing the scent of the family’s other dog, Penny’s brother Truman. Penny lost almost half of her body weight during her 34-day odyssey, but was otherwise healthy.

“Babs has a sixth sense with animals that is uncanny,” Colafrancesco said. “What she does is amazing. Call it a miracle or good fortune, but without Babs’ intervention we would not have our dog today.”

Although Fry generally works alone fielding calls and doing recoveries, she has a team of about 10 volunteers, including Rodriguez. She also has the support of her husband, Derek Fry, an executive with a helicopter rental company based in the Dallas-Fort Worth, Texas. The Frys own a 22-acre ranch in Texas where someday they hope to open an animal sanctuary. But for now, her focus is entirely on A Way Home for Dogs.

She’s grateful to the Colafrancescos for establishing the nonprofit because virtually all of her recovery expenses — including gasoline, cooked chickens and equipment, as well as food and professional training for stray dogs that have suffered trauma — come from her own pocket. With donations, she’ll be able to track and recover even more dogs.

“I never had any desire to embark on my own rescue organization independently,” she said. “I just wanted to help these dogs and all the people who are missing them.”