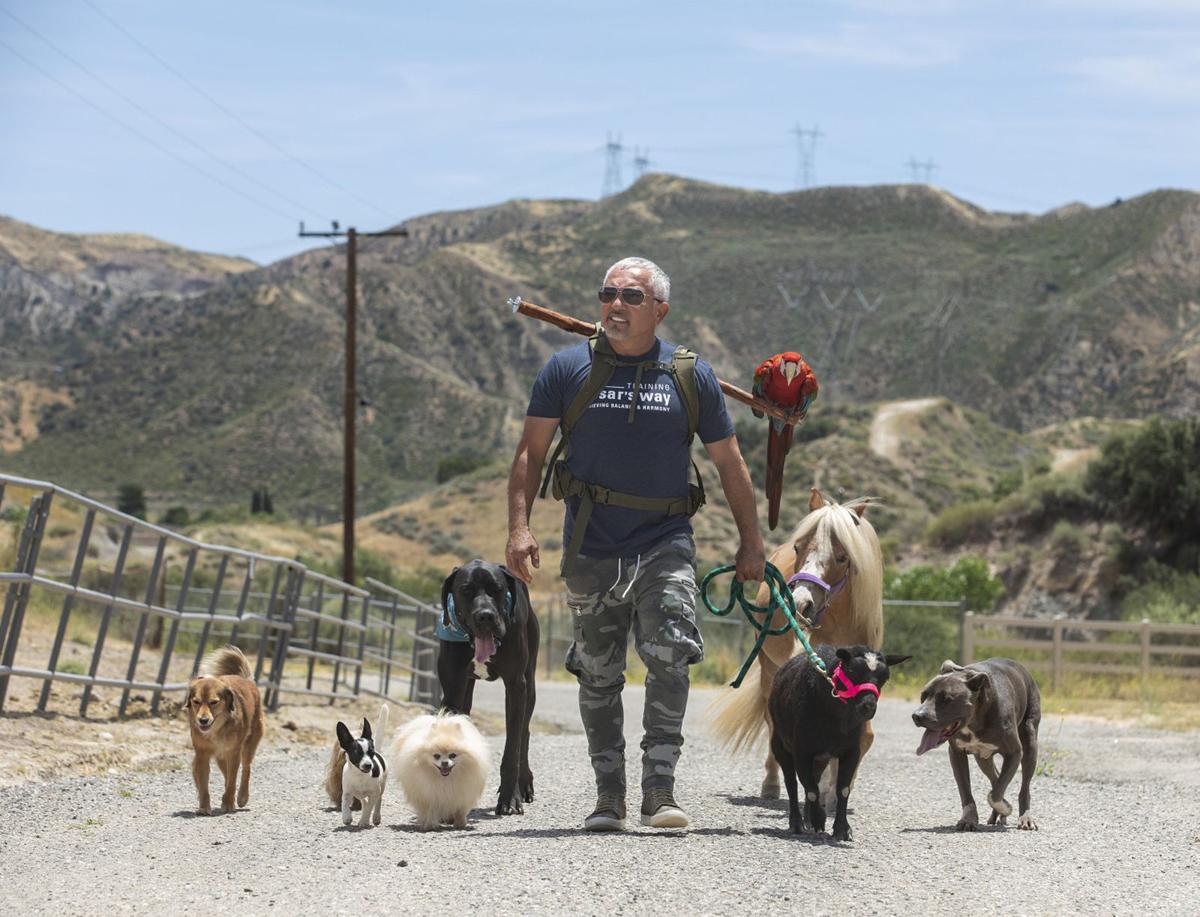 Dog trainer Cesar Millan goes for a walk on his ranch in Santa Clarita, Calif. with a variety of dogs, a miniature horse, a goat and a macaw. All the animals and bird belong to Milan except for the great Dane, that was visiting. Mel Melcon/Los Angeles Times 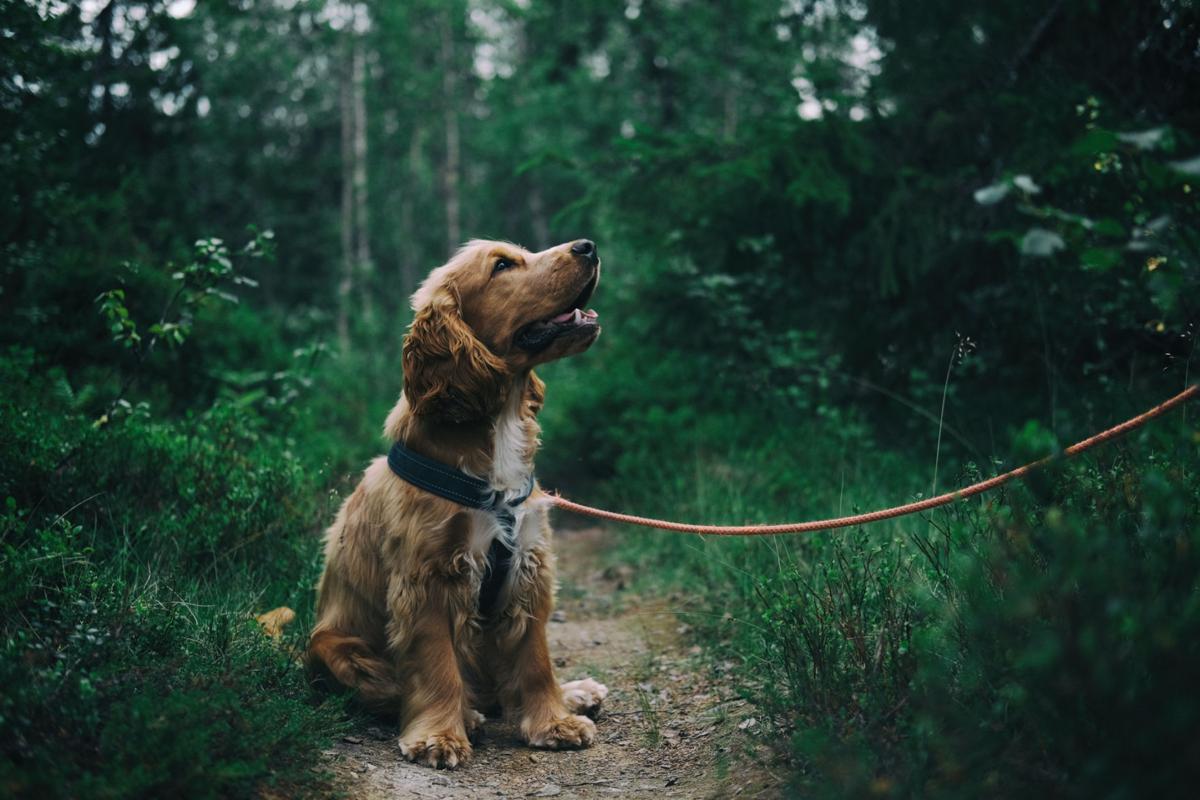 Dog trainer Cesar Millan goes for a walk on his ranch in Santa Clarita, Calif. with a variety of dogs, a miniature horse, a goat and a macaw. All the animals and bird belong to Milan except for the great Dane, that was visiting. Mel Melcon/Los Angeles Times

When the stay-at-home orders began in mid-March, many Americans made beelines for their local animal shelters to either foster or adopt adorable dogs.

All over the country, shelters normally faced with the terrible task of euthanizing unwanted animals because their kennels were overflowing were able to happily report that their cages were nearly bare.

Dog trainer-to-the stars and animal behaviorist Cesar Millan — you know him as the “Dog Whisperer” — has no doubt that the dogs were fostered or adopted into loving homes. His question is whether these new pet parents are committed to the long-term task of caring for their new family members, a commitment that requires more discipline and mental stimulation than a steady diet of kisses and treats.

In May, L.A. municipal animal shelter officials said they were worried about a resurgence in pet drop-offs, in part because of COVID-19 job losses that have made it difficult for people to afford pets. Los

Adopting a dog to keep you company in isolation “is like getting married for all the wrong reasons or having children for the wrong reasons,” said Millan, who will begin filming another 10 episodes of his popular “Dog Whisperer” TV show in July. “When the human response is to think of yourself first, then the outcome in the future is not going to be good.”

If someone has a puppy and that puppy is a problem, “then the owner wasn’t honest from the beginning,” Millan said. “People say, ‘I’m going to get a puppy. (But) I don’t know what I’m doing. I don’t know if I want to care for them for 13 or 14 years, and I don’t know how much it will cost ... I just know I want a puppy.’ Dogs hold on to honor, integrity, loyalty, trust, respect and love ... so that puppy knew the moral code was broken from the moment it was adopted.”

Dogs are pack animals that instinctively look for a leader, and if their humans don’t provide that leadership then the dogs get confused and lose respect, especially if their bad behaviors are “rewarded” with endless treats and affection.

“Humans are the only species who follow unstable leaders,” said Millan, who still trains dogs at his Santa Clarita ranch, Cesar’s Way. “Dogs live in a way that’s natural, simple and profound. If your energy is not aligned — if you live in chaos and are not calm, they will not follow you. They’ll learn to live with it, but that doesn’t mean they’re OK.”

For instance, he said, if your dog jumps on you, you can interpret that as, “Oh, my dog loves me,” but eventually, it’s going to be a problem for you and anyone else who comes around. Dogs need boundaries, just like children, Millan said, but “if your energy is off, if you’re not calm and full of love and joy, they can ignore you.”

Dogs basically have three reactions, he said — fight, flight (or avoidance) and submission or surrender. Submission is the place you want them to be, because nobody listens when they’re in fight or flight mode. “When Oprah is on TV, all those woman are in the surrender state,” Millan said. “That’s the most powerful state of mind, because you’re listening, surrendering to information. It’s what people call ‘openminded.’”

Millan worries that many new dog owners don’t know these things and that they may be getting frustrated with their pets because of their pesky behaviors or the time it takes to walk them every day. Maybe the humans are planning to return to work soon and their dogs are causing trouble at home, especially when they’re gone.

The trick, Millan said, isn’t in training the dogs but ourselves. “I train people,” he said, “and rehabilitate dogs. I try to bring consciousness to the humans.”

For instance, Americans tend to smother their dogs with affection. That makes the owners happy but doesn’t do much for their pets. “Dogs in third world countries are skinny, but they don’t have psychological problems,” Millan said. “My clients all have empathy and compassion — love is not the problem. But they’re not giving their dogs any exercise or mental stimulation.”

In fact, he said, the coronavirus quarantines have given us a glimpse of what life was like for our dogs pre-pandemic, when they were stuck at home, inside all day while we were away. “But they never said, ‘I’m quitting, I don’t want to live with you, I’m going to send you to a shelter because you’re boring.’ They know how to adapt and they suck it up, regardless of how inconsistent you are, unconscious you are and how much you don’t know.”

Bottom line: The biggest problem with problem dogs is the ignorance of their owners, said Millan. But don’t lose heart. Because your dog is committed to the relationship, you can turn things around by putting its needs first — body, mind and heart, a.k.a. exercise, discipline and affection — in that order.

The first thing many dog owners do in the morning is drag out the kibble and feed their antsy dogs, maybe let them out to pee for a few minutes and then race off to work. But that’s not what the dog needs, “Dog Whisperer” Cesar Millan said. When your dog wakes up the morning, the first thing it needs is to stretch and then walk — not eat.

By walking your dog first, for at least 45 minutes, you are giving your pet a chance to expend its pent-up energy, stimulate its mind and “earn” its food, Millan said. Breakfast comes after the walk — “You feed them because they earned it; you’re giving them their paycheck.”

Taking a walk is also a good time to establish that you are the leader of your pack. This means teaching the dog that it stops when you want to stop and walks next to or behind you, instead of pulling or yanking you along. The trick is in controlling the dog’s nose, Millan said.

Using a leash like the Gentle Leader will keep the dog from sniffing everything as it goes along, until you say it’s OK to stop and sniff or relieve itself. If the dog can stop and sniff at will, “you’ve lost them. If humans lose the nose, they lose control.”

Millan recommends at least 45 minutes of morning walking for older, lower energy dogs and up to two hours for high energy dogs. What if you have a combination of both? Millan used to have 65 dogs at his Santa Clarita ranch, and he learned that the high energy dogs needed extra weight to slow them down so they didn’t leave the slower ones behind.

So if you have a high-energy dog, give it a backpack to wear during walks, filled with something soft, like rice, dried beans or sand, that is the equivalent to 50% of their weight. (So a 22-pound dog would carry 11 pounds). “That way, a one-hour walk turns into (the equivalent of) a two-hour workout for a high-energy dog.”

When you return home at night, don’t immediately jump up and down with your dog. Start a ritual of calm. “If that’s how you welcome your dog every night, with him jumping on you and barking, he’s going to do that with everyone who comes in the door,” Millan said. Instead, when you walk in, let your dogs smell you but don’t acknowledge them, touch them or make eye contact for many minutes, until they are calm.

“By practicing calmness, he’s learning how to read people. He has all that eight to 10 hours of accumulated boredom, anxiety and frustration from being inside all day, but he can learn how to meet people in a calm way. And once he relaxes completely, then you can hug him, give him a treat and go back to being calm.”

This shouldn’t be a news flash to anyone who’s been staying home the last three months, but things can get pretty boring when you’re home alone all day. Boredom and anxiety can lead to less-than-desirable behaviors, such as incessant barking or chewing up the furniture. The trick is finding toys that stimulate a dog’s mind, such as Nina Ottosson puzzle games and other “brain toys,” and changing them up regularly so your dog doesn’t get bored.

Avoid squeaky toys, which can cause dogs to go into a frenzy, Millan said: “Now you’re bringing the animal out. To them, it’s the equivalent of hunting, so they’re killing and not playing anymore. We want to have toys that bring out the domesticated stuff, where the dog regains its calm and surrender, its happy-go-lucky state of play.”