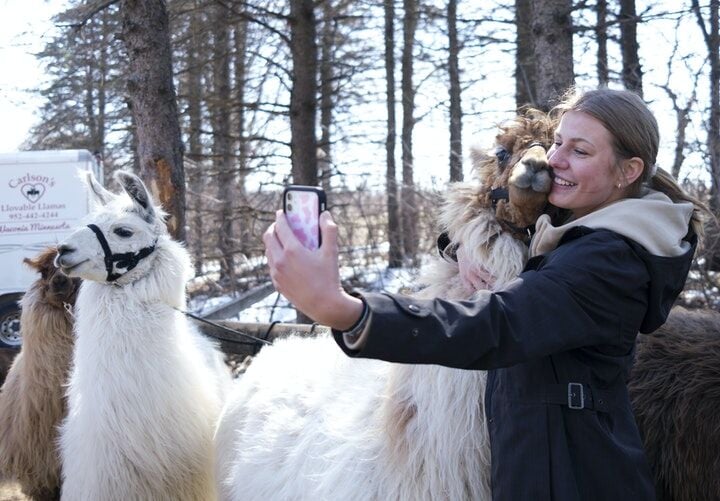 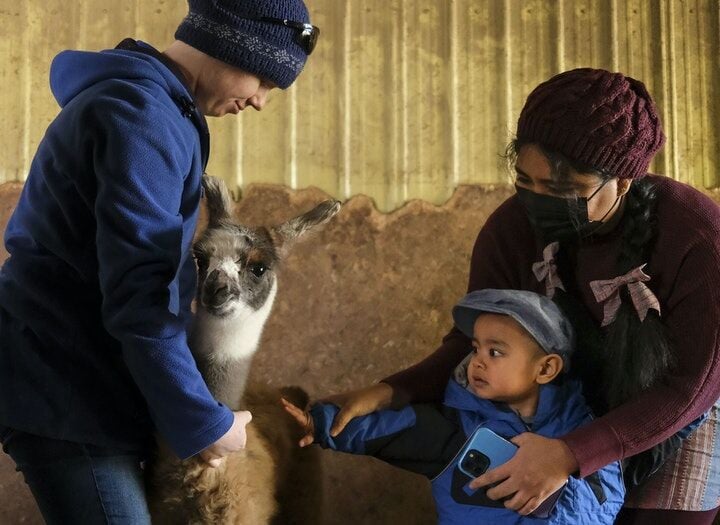 Phyo Wai, of Elk River, held her 2-year-old son, Andrew Maung, as he patted a 1-day-old cria, or baby llama, which was being held by Margaret Thom. Aaron Lavinsky/Star Tribune/TNS 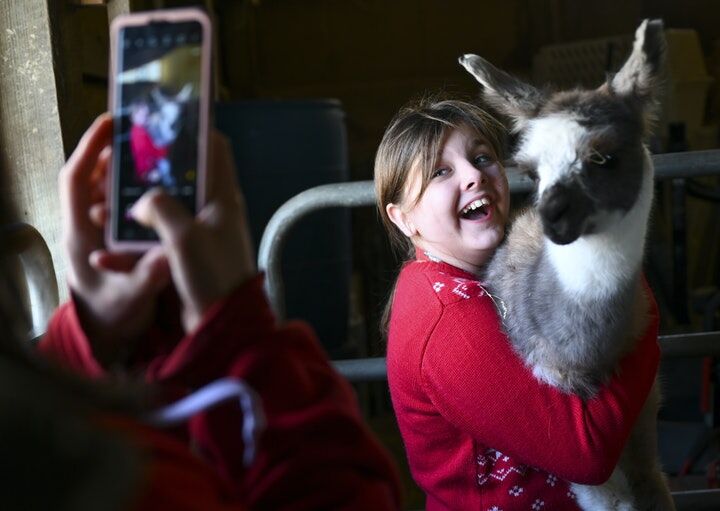 Mary Hugger took a photo of her daughter, Grace, 12, as she held a cria, a baby llama, while visiting Carlson’s Llovable Llamas. Aaron Lavinsky/Star Tribune/TNS

Phyo Wai, of Elk River, held her 2-year-old son, Andrew Maung, as he patted a 1-day-old cria, or baby llama, which was being held by Margaret Thom. Aaron Lavinsky/Star Tribune/TNS

Mary Hugger took a photo of her daughter, Grace, 12, as she held a cria, a baby llama, while visiting Carlson’s Llovable Llamas. Aaron Lavinsky/Star Tribune/TNS

Hugging a llama didn’t just brighten Isabella Odin’s day. It made her week, especially as another pandemic spring begins.

“Every time I talk about it or look at the photos or tell somebody about it, it definitely brings a smile,” said Odin. “There’s something about going and bonding with animals, it’s almost like a gift. There’s something magical.”

Odin had been planning to go to Carlson’s Llovable Llamas in Waconia since January. She tried to book a Valentine’s Day date with her fiance, but visiting the farm has become such a popular COVID-19 activity that she couldn’t get in until closer to St. Patrick’s Day.

The 10-acre farm (which hosts $10-per-person visits by appointment only) has been overrun with requests during the past year.

“We’ve just been constantly busy,” said Rick Carlson, who manages the visit schedule for the family farm, which has more than 50 llamas. “Weekends are booked about 2 1/2 months out.”

Weeping Willow Acres, a Minnetrista farm with nine llamas, started booking small-group visits ($185 for up to 10 people) through Eventbrite last year. Visits have been consistently selling out, said owner Natalie Pierce, who set up a live llama cam for those who want to virtually visit the herd, which shares the farm with mini donkeys, peacocks, sheep and chickens.

Bonding with llamas has rapidly gained appeal because it gives people a chance to experience something novel and safe at a time when many continue to avoid riskier indoor activities. It also offers comfort and connection when human hugs are in short supply.

And because llamas are such gentle, sunny, social creatures (they spit, yes, but at each other), many find them therapeutic.

“They do have this, some say, aura about them,” said Pierce.

While quality time with llamas is in-demand in Minnesota, farms in other parts of the country are seeing a surge in visits to cuddle with cows — a therapeutic practice that began in the Netherlands, where it’s called “koe knuffelen.”

Being with animals and petting them can improve mental and physical health by reducing stress, promoting the release of mood-boosting hormones and lowering blood pressure, animal-assisted-therapy studies have found. Cows’ large size, warm body temperature and slow heartbeat can be especially soothing, say farmers who offer the practice — plus the cows themselves seem to love it, and will often lie down and put their heads in people’s laps.

At Carlson’s Llovable Llamas, where llama babies (called crias) are due this month, Carlson has noticed that visitors discover another benefit.

“You come out to play with llamas, you don’t have to think about the things in your life that are bothering you,” he said.

Leona Ryan, who drove from St. Paul to meet friends at the Waconia farm after learning about it on TikTok, said she appreciated being able to get out and get together — and not just with the llamas.

When she took a cocoa brown llama named Mocha for a walk, she leaned in close for a selfie and rested her cheek on the friendly camelid’s forehead.

“I had so much fun,” Ryan said. “Connection is something we all need.”