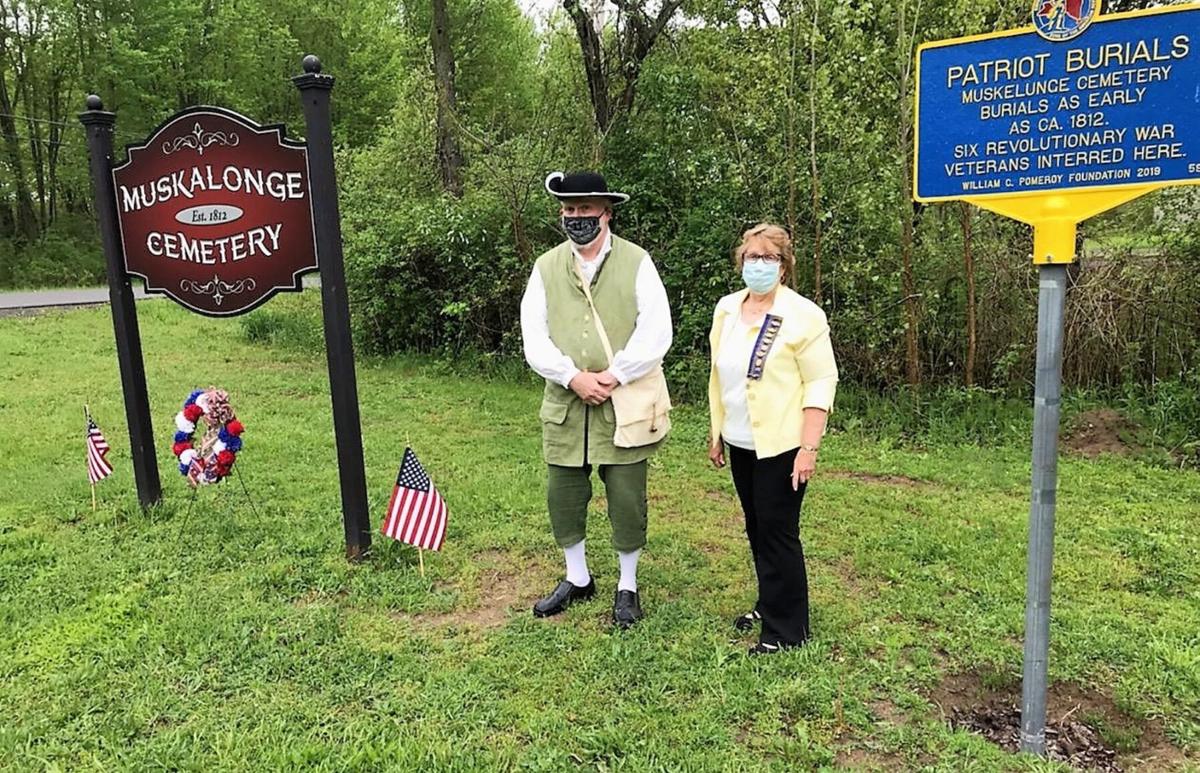 Bruce Coyne, president of the Thousand Islands Chapter of the Sons of the American Revolution, poses with Ann Davis, member of the General Jacob Brown chapter of the National Society United States Daughters 1812, near the new historical marker at Muskalonge Cemetery on Memorial Day. The cemetery in Hounsfield was formed in 1849. Photo courtesy of Mary Erskine 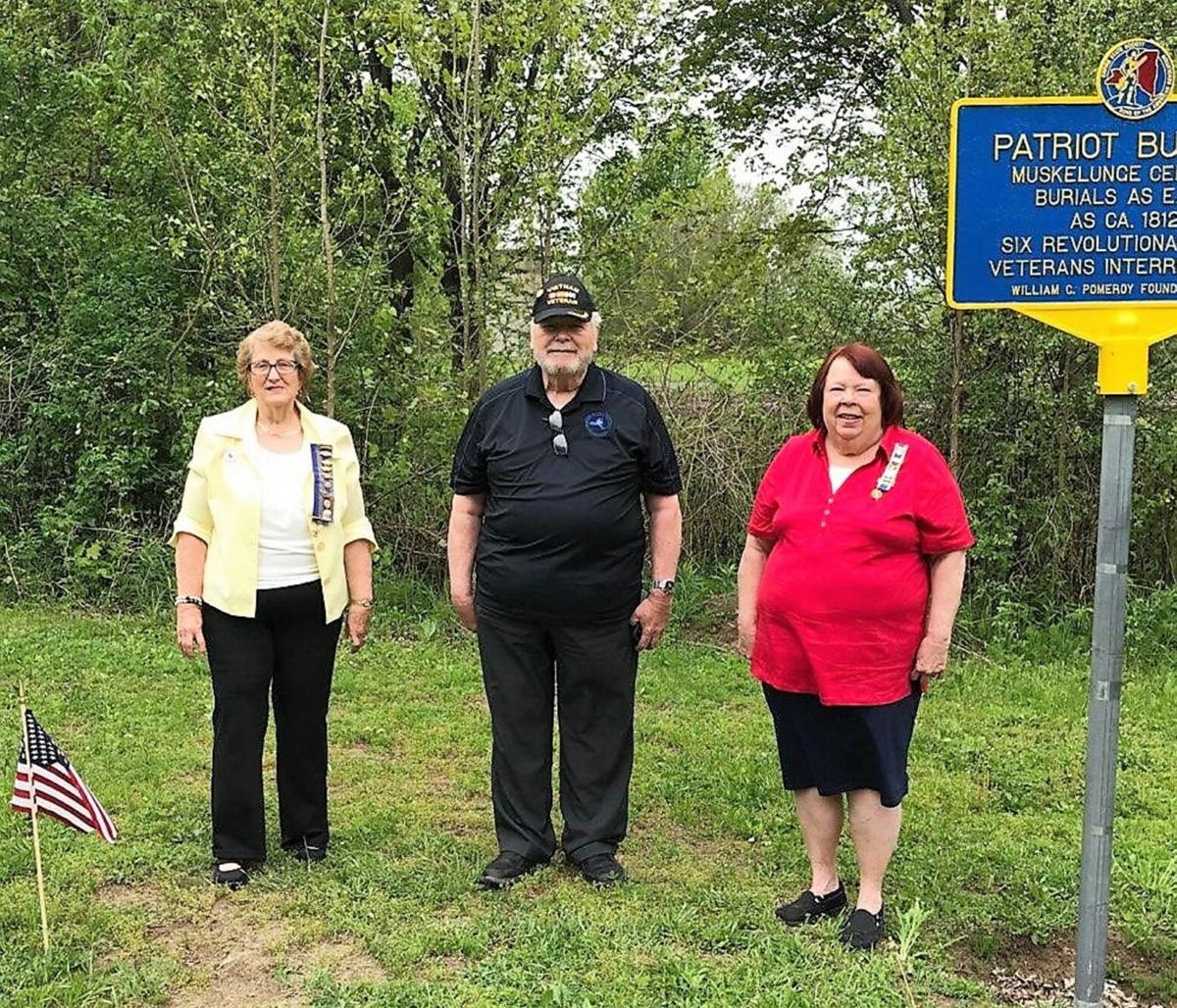 Bruce Coyne, president of the Thousand Islands Chapter of the Sons of the American Revolution, poses with Ann Davis, member of the General Jacob Brown chapter of the National Society United States Daughters 1812, near the new historical marker at Muskalonge Cemetery on Memorial Day. The cemetery in Hounsfield was formed in 1849. Photo courtesy of Mary Erskine

HOUNSFIELD — Ten years ago, the Muskalonge Cemetery was called “the forgotten cemetery” when a group of volunteers got together to revitalize the grounds and to help preserve the legacy of soldiers dating back to the Revolutionary War who are buried there.

The latest chapter in the success of that revitalization effort was realized Memorial Day, when a historical plaque from the William G. Pomeroy Foundation, Syracuse, was dedicated in honor of the veterans interred there.

The cemetery, (alternately spelled over the years Muskelonge, Muskelunge and Muskallonge), was formed in 1849 on land donated by a farmer. Besides the War of Independence and War of 1812 veterans, there are veterans from the Civil War, World War II and the Vietnam War buried at the site as well as north country pioneers. The town of Hounsfield took over he care of the graveyard in 1999 and has provided basic maintenance.

But in 2010, volunteers, including those from the Daughters of the American Revolution, the U.S. Daughters of 1812 and the Sackets Harbor American Legion went to work to restore the cemetery, located off Evans Road in the town of Hounsfield.

There are about 250 grave sites at the cemetery, which encompasses about an acre.

“When we started, the grass was knee high and we were falling over stones. We didn’t even know they were there,” said Anne Davis, member of General Jacob Brown chapter of the National Society United States Daughters 1812. “It’s night and day.”

The historical Pomeroy Foundation marker joins a bench and a flag pole at the cemetery.

“It’s come a long way. It’s very peaceful there,” said Mrs. Davis. “You can see all the broken stones but there’s a lot of ancestors there who settled Jefferson County that are buried there. It’s not only our military. We try to keep it nice. It’s probably one of the nicest, older cemeteries in the county.”

The sign is part of a program launched by the Thousand Islands Chapter, Empire State Society, Sons of the American Revolution. Veterans of the Revolutionary War who are buried in Jefferson County are having their fighting and pioneering spirits remembered through the sign program.

The chapter secured nine signs through the William G. Pomeroy Foundation to mark cemeteries across Jefferson County that contain the graves of documented Revolutionary War veterans.

They are financed by grant applications made to the Pomeroy Foundation by the SAR.

Key missions Among the missions of the Syracuse-based William G. Pomeroy Foundation is supporting the celebration and preservation of community history. It also has a mission to raise awareness, support research and to improve the quality of care for patients and their families who are facing a blood cancer diagnosis.

Mrs. Davis said the Muskalonge Cemetery now has a tradition of hosting a Memorial Day ceremony.

“It was unusual this year, but we weren’t going to let it go by and not do it,” Mrs. Davis said. “There wasn’t a lot of people, and we self-distanced.”

Volunteers have created a PowerPoint presentation about their efforts at Muscalonge that they share with historical groups and community leaders.

“We need to get it out that a lot more work needs to be done,” Mrs. Davis said.

But in another sign of progress, the cemetery recently saw an internment.

The internment was for Edison W. Cox Jr., formerly of Watertown and Carthage, who died in April at the age of 75. He was employed in the maintenance department at Jefferson Community College for many years retiring April 15th, 1995. His obituary noted that he was a lifelong leaner with a strong interest in local and military history.

Previous to that internment, the last one had been for Mr. Cox’s uncle, John H. “Jiggs” Roacher Jr., 81. Mr. Roacher was superintendent of the cemetery for many years. Mr. Cox rests at his side.