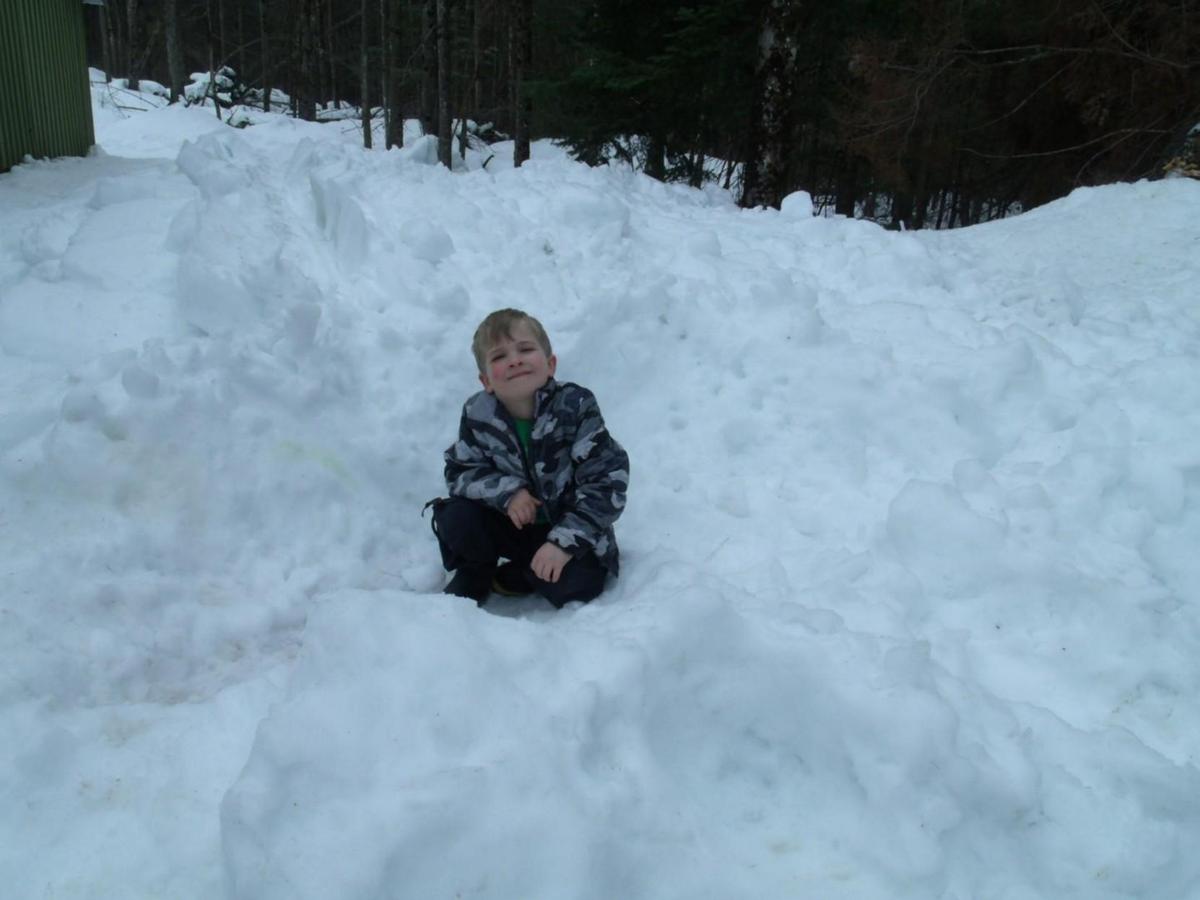 Mason Malette, 6, sits in the snow pile, partially melted in this photo, that he was accidentally buried beneath last month outside a neighbor’s garage on Wilson Road in Hopkinton. Contributed photo by Wanda Malette 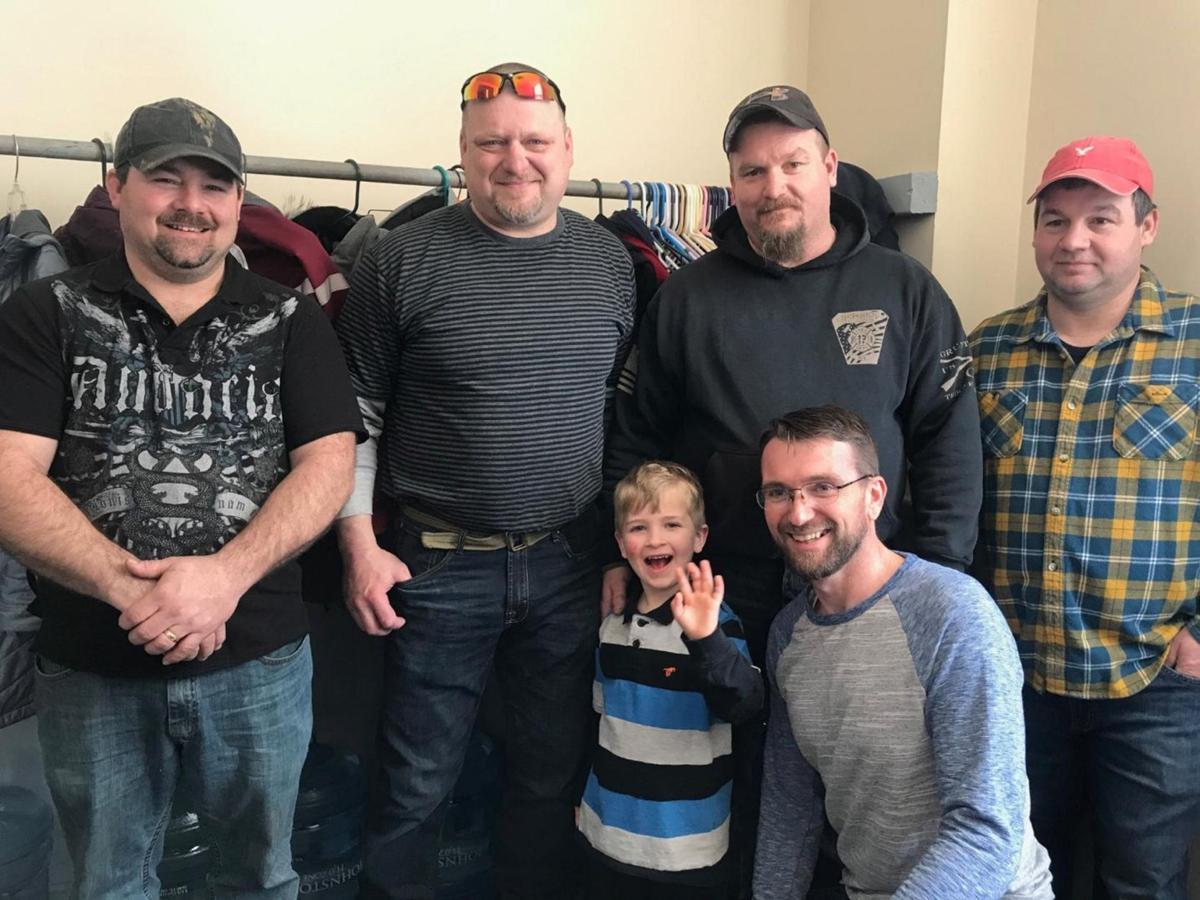 The Crump family stands with Mason Malette, 6, at their mother Wynona I. Crump’s memorial service in February. The four brothers and brother-in-law helped rescue Mason after he was accidentally buried beneath 2 feet of snow near a neighbor’s garage in Hopkinton last month. Back row from left, Robbie, Gary Jr., Greg and Jeff Crump. Kneeling, Mason Malette and Jim Grant. Contributed photo by Wanda Malette

Mason Malette, 6, sits in the snow pile, partially melted in this photo, that he was accidentally buried beneath last month outside a neighbor’s garage on Wilson Road in Hopkinton. Contributed photo by Wanda Malette

The Crump family stands with Mason Malette, 6, at their mother Wynona I. Crump’s memorial service in February. The four brothers and brother-in-law helped rescue Mason after he was accidentally buried beneath 2 feet of snow near a neighbor’s garage in Hopkinton last month. Back row from left, Robbie, Gary Jr., Greg and Jeff Crump. Kneeling, Mason Malette and Jim Grant. Contributed photo by Wanda Malette

HOPKINTON — Five siblings gathered at the home of their mother on a February Sunday on Wilson Road in Hopkinton. Wynona I. Crump had died that morning, and the weight of the news was still sinking in for her four sons and daughter.

But they didn’t know that half a mile down Wilson Road at a neighbor’s house, a young boy needed their help.

Off Route 458 just south of Hopkinton and Nicholville, Wilson Road runs about 2 miles with one bend along its northern stretch. Houses pepper the sides of the roadway, and it was in Mrs. Crump’s driveway that the Crump siblings first saw a frightened neighbor that day, late in the afternoon on Feb. 23.

“She was pretty panicky,” Jeff Crump said of Wanda Malette, of 161 Wilson Road.

Mrs. Malette couldn’t find her son, and the Crump family started up vehicles and headed to the Malettes’ house.

Shortly before driving down the road to the Crump house seeking help and not knowing of their loss that day, Mrs. Malette and her husband Matt Malette Sr. were outside with another neighbor, who had asked the Malettes to bring their metal detector to help him find a chainsaw that had fallen off the back of his tractor into the snow.

The Malettes began the chainsaw hunt around 2 p.m. and searched for about 30 minutes while their two children, 6-year-old Mason and 13-year-old Emma, were inside their home picking out a movie to watch together.

As Wanda and Matt returned to their house, chainsaw found, Emma approached them, and the family began a new search. Mason had walked out of the house, wearing only a shirt, shorts and shoes, hoping to catch up with his parents and tell them — in a true little-brother manner — his sister wouldn’t let him have any ice cream.

But as Mason walked around the neighbor’s property, he passed by the neighbor’s garage and heard snow start to inch off the garage roof. He was buried beneath 2 feet of the fallen snow.

After searching their own house and garage and finding some tracks they presumed to be Mason’s, the Malettes contacted neighbors and family members, thinking, “maybe one of our neighbors could have noticed an out-of-the-ordinary vehicle,” Mrs. Malette said.

Then Wanda drove down the road and found the Crump family in their mother’s driveway. At that point, she said, she was afraid Mason had been abducted.

“I followed the tracks to the road, and they ended,” Mrs. Malette said, adding that the snow in the roadway had begun to melt and was slushy, making it difficult to track prints on the road itself.

The search continued for about 15 minutes, Jeff Crump recalled, with Jeff, Greg, Gary Jr. and Robbie Crump, their brother-in-law Jim Grant, and neighbors Veron Parker and Joel Parmer looking for tracks and calling for Mason alongside his family.

Emma grabbed Mason’s coat and tried to have their dog track his scent, her mother said.

After finding tracks leading to the front door of the neighbor’s house and tracks around the property, the group determined Mason must have been somewhere around his neighbor’s house, wanting to find his parents and tell them about the ice cream prohibition.

Mason later told his parents he started to run out of the way of the falling snow but didn’t make it in time. He said he could hear his family and neighbors calling his name through the snow and that he was calling for them, too.

Soon, he fell asleep face down, unable to move his arms and dig himself out.

The searchers had made their way to the neighbor’s garage, and Mr. Grant and Robbie Crump thought they heard what sounded like a groan, faint and indistinct. When they heard the noise again, they started to dig.

Greg Crump, who serves as the second assistant chief for Hopkinton Fort Jackson Volunteer Fire Department, had called 911 earlier, but at this point, he used his radio and called over the scanner for an ambulance.

Both Mr. Grant and Robbie Crump volunteer for Norwood Fire, and Mrs. Malette said having such an experienced group of people helping in the search and rescue made her feel especially fortunate.

Coincidentally, a New York state trooper was parked in Hopkinton when he heard Greg’s call.

By the time the trooper arrived, Mason had been removed from the snow, and Jeff had carried him into the neighbor’s house where the searchers began to warm him with blankets. The trooper then helped cut Mason’s wet clothes off and wrapped him in an emergency thermal blanket. He was unresponsive and breathing shallowly.

By the time Mason was under a warming blanket in the Canton-Potsdam emergency room, it was about 4 p.m. His temperature monitor read 80 degrees.

“About 40 minutes later, I told him I love him, and he muttered through the oxygen mask, ‘I love you,’” Mrs. Malette said. “Those were the best words I heard all day.”

And about two hours after being wheeled into Canton-Potsdam, Mason’s body temperature had stabilized at 98 degrees.

The next day, Mason was transferred to a pediatric critical care unit in Plattsburgh, where doctors determined the top portion of Mason’s lungs had collapsed, but that his kidneys and other organs were functioning normally. His only other injuries: a few scrapes on his face and legs.

“It was a miracle,” Mrs. Malette said. “Everyday, I’m so thankful for my neighbors and our community. Without them, our son wouldn’t be here.”

Almost a month after the Feb. 23 events, Mason sported an Indiana Jones hat as he played with his sister on Canton’s F.S. Banford Elementary School playground last week.

Describing him as feisty and “not afraid of much,” Mrs. Malette watched Mason chase his sister and expend some 6-year-old energy.

Mason shared his story with his Parishville-Hopkinton kindergarten classmates, and his teacher gave him his new explorer hat. And the Malettes attended Mrs. Crump’s memorial service last month, where Mason stood for a photo with his rescuers.

“Mason had an angel with him that day,” Mrs. Malette said. “And I think her name was Wynona.”