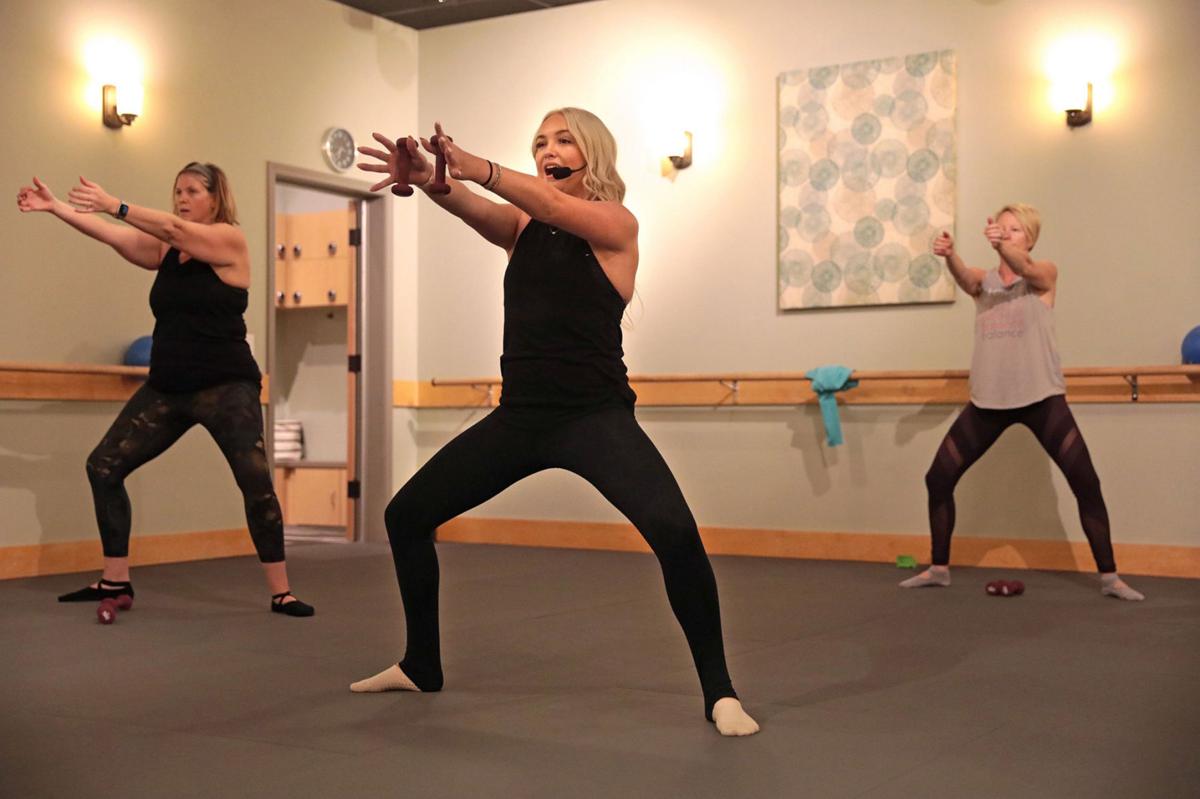 Kayla Krumrey, 21, of St. Charles, teaches a barre class at Barre Harmony in St. Peters on Nov. 21. Krumrey has cystic fibrosis and until recently would have struggled to teach the class. Cristina M. Fletes/St. Louis Post-Dispatch 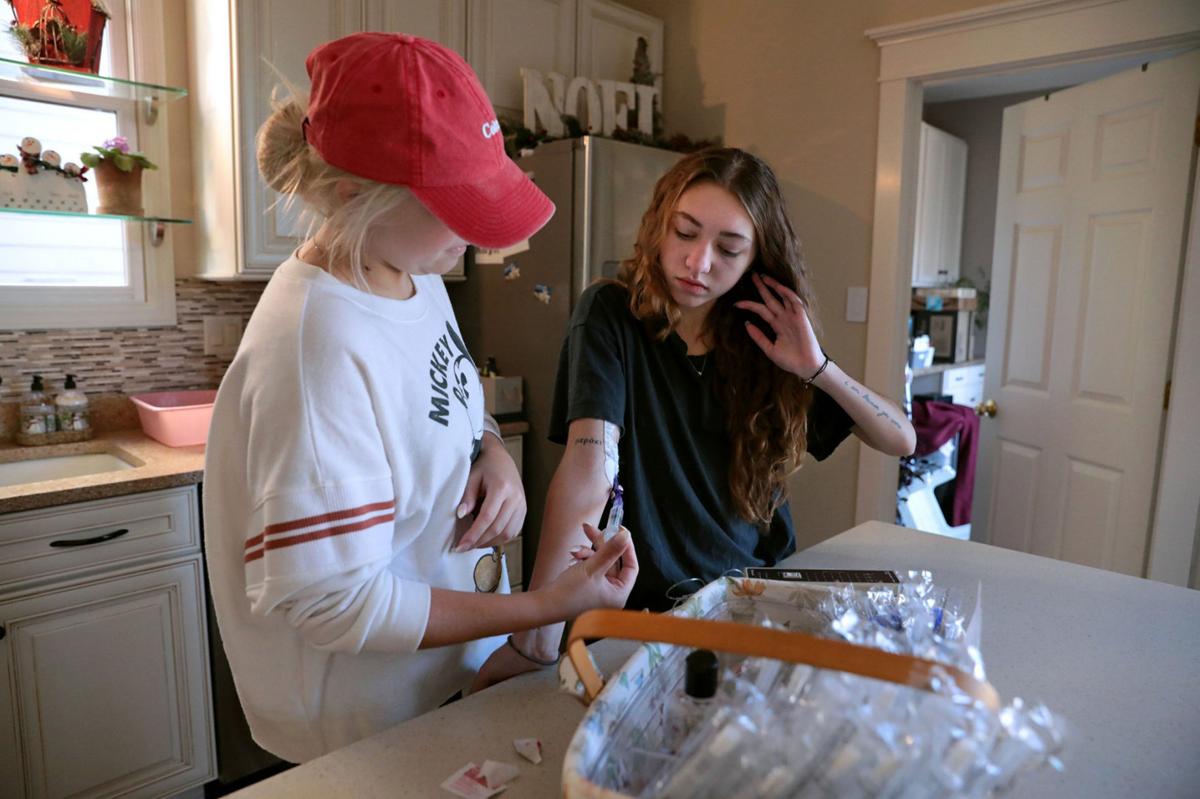 Kayla Krumrey, 21, left, gives her sister, Hannah, 20, a dose of IV antibiotics at their home in St. Charles on Wednesday, Dec. 4, 2019, as Hannah works to recover from a cold that landed her in the hospital for several days. Both Kayla and Hannah have cystic fibrosis and can become seriously ill from a common cold. (Cristina M. Fletes/St. Louis Post-Dispatch/TNS) 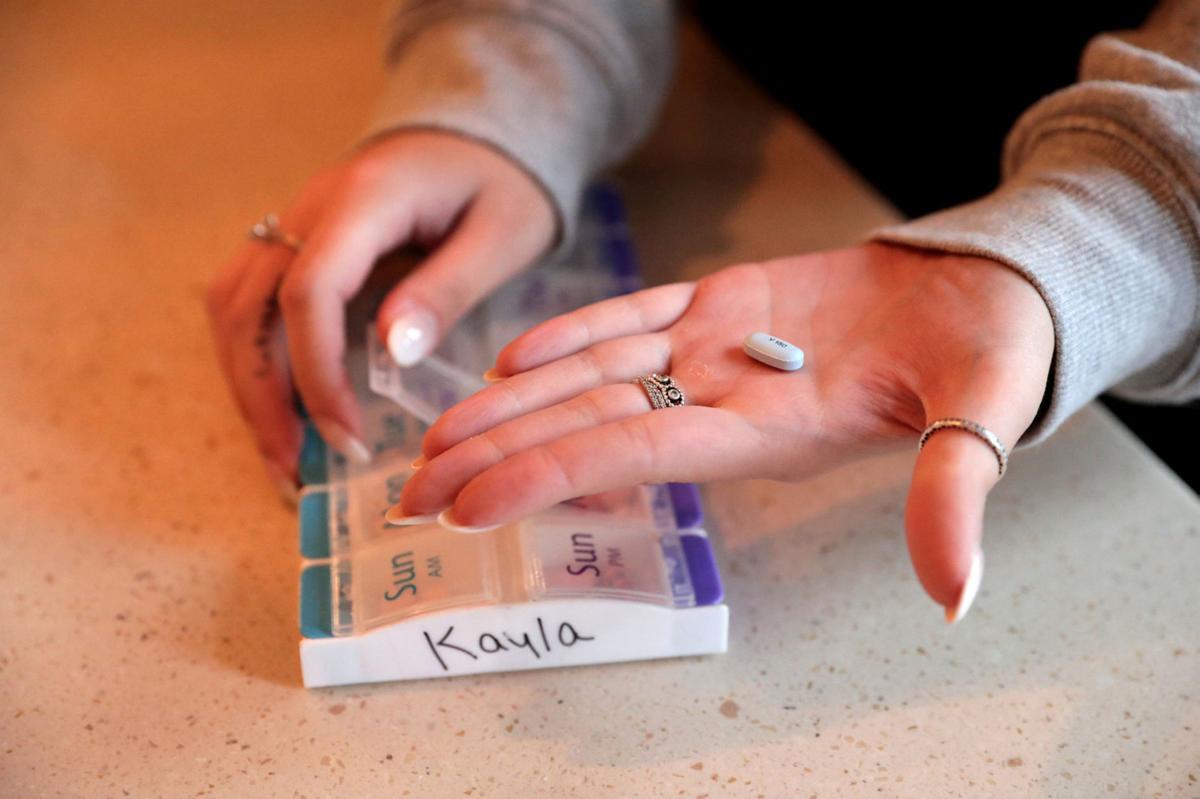 Kayla holds up a pill that she takes for her cystic fibrosis. Krumrey began taking it a few months ago and has already seen positive results. Cristina M. Fletes/St. Louis Post-Dispatch 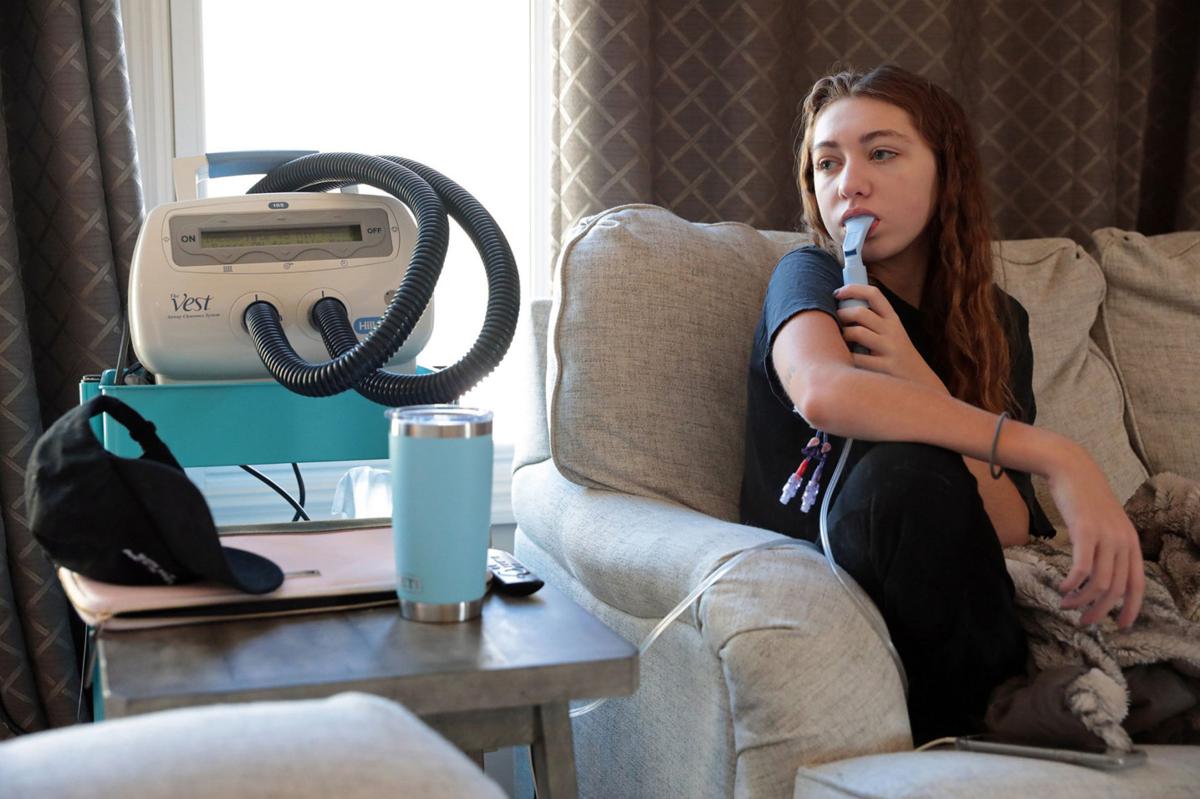 Hannah Krumrey, 20, does one of her daily breathing treatments for cystic fibrosis at her home in St. Charles on Wednesday, Dec. 4, 2019. Krumrey has had a cold for the past few weeks that she has struggled to recover from and ended up in the hospital for several days. Cristina M. Fletes/St. Louis Post-Dispatch

Kayla Krumrey, 21, of St. Charles, teaches a barre class at Barre Harmony in St. Peters on Nov. 21. Krumrey has cystic fibrosis and until recently would have struggled to teach the class. Cristina M. Fletes/St. Louis Post-Dispatch

Kayla Krumrey, 21, left, gives her sister, Hannah, 20, a dose of IV antibiotics at their home in St. Charles on Wednesday, Dec. 4, 2019, as Hannah works to recover from a cold that landed her in the hospital for several days. Both Kayla and Hannah have cystic fibrosis and can become seriously ill from a common cold. (Cristina M. Fletes/St. Louis Post-Dispatch/TNS)

Kayla holds up a pill that she takes for her cystic fibrosis. Krumrey began taking it a few months ago and has already seen positive results. Cristina M. Fletes/St. Louis Post-Dispatch

Hannah Krumrey, 20, does one of her daily breathing treatments for cystic fibrosis at her home in St. Charles on Wednesday, Dec. 4, 2019. Krumrey has had a cold for the past few weeks that she has struggled to recover from and ended up in the hospital for several days. Cristina M. Fletes/St. Louis Post-Dispatch

ST. LOUIS — Amy Chastain didn’t think she would be able to be a mom. She didn’t think her child would be born with the same debilitating disease as her.

She didn’t think she would live long enough to see this day, when a drug could change her life and most importantly, her son’s.

At age 40, Chastain is pushing the limits. The average life expectancy for someone with cystic fibrosis is 41. Chastain had a serious scare two years ago, when she spent more than a month in the hospital because she got so ill. She needed a feeding tube and oxygen tank. She faced the need for a lung transplant.

A breakthrough drug was approved Oct. 21 for 90% of teen and adult patients with cystic fibrosis, a genetic life-threatening disease that causes thick mucus to build up in the lungs and other organs. The drug — Trikafta — is the first therapy to show dramatic improvement in lung function for a majority of those with the disease.

Knowing the drug showed promising results in studies, families had been waiting anxiously for months for approval by the federal government, which came faster than expected.

“Today marks a tremendous breakthrough and exciting news for people with cystic fibrosis,” said Dr. Preston Campbell, president of the Cystic Fibrosis Foundation. “This milestone is the result of an extraordinary community coming together against great odds, and we are overjoyed that this will mean more people will have effective treatments for their disease.”

Chastain began taking the pill a few weeks after it was approved, and within three days, she said she already felt better. After her morning treatments to clear the mucus that settles in her lungs overnight, she had little to cough up.

She has more energy. She’s able to make her bed, keep her wood floors clean and walk to her car without getting winded and having to take breaks.

“I read that it takes effect that quickly, but I didn’t believe it,” Chastain said. “But it is. It’s been amazing.”

Her son, Kyler, is now 14. Having religiously spent his life doing the breathing treatments that can take two to three hours every day, his lungs are still strong.

At his next appointment with a specialist at St. Louis Children’s Hospital in January, they will begin the process of getting Trikafta for him too.

While the long-term effects are unknown, the hope is that the drug will help slow the progressive damage of the disease.

“It’s very exciting to think that he hopefully won’t ever get as sick as I am,” Chastain said. “As a mother, you just can’t put in to words what that means to me, that he won’t have to go through everything that I have. Hopefully, he’ll just be able to live a long, healthy life.”

But there’s more to her story, she says. She might not have become a mom if not for a mistake in her husband’s genetic test. Because of the mistake, they falsely believed their child would not be born with cystic fibrosis.

“I don’t know what happened or why, but I’m thankful because, while it took a while to get over my anger, I can’t imagine not having Kyler,” Chastain said. “For whatever reason, he is meant to be here, he is meant to have CF.”

Her anger turned to thankfulness, she said, and now it’s turned to hope.

More than 30,000 people suffer from CF in the United States, with 70,000 affected worldwide according to the Cystic Fibrosis Foundation. In Missouri and Illinois, newborn screening tests show about one in 3,500 babies are born with CF, said Dr. Thomas Ferkol, pediatrics professor at Washington University School of Medicine.

“It’s considered to be a rare or orphan disease, but it’s one of the more common inherited diseases,” Ferkol said.

In people with CF, mutations in a regulator gene cause a defect in the cells covering surfaces of the body — the skin, airways, blood vessels and organs. The cells can’t maintain their balance of salt and water, causing mucus in various organs to become thick and sticky.

“It leads to damage and ultimately, the destruction of organs,” Ferkol said.

In the lungs, mucus clogs the airways and traps germs, leading to infections and other complications. Other problems include decreased sweating, digestive problems, poor growth, diabetes and infertility.

Doctors have treated the disease by addressing the symptoms — taking drugs to loosen the mucus, using airway clearing devices several times a day and taking supplements to replace pancreatic enzymes.

Trikafta directly addresses the salt-water imbalance by improving the function of defective proteins. It is the first drug to do so in CF patients with the most common gene mutation — 90% have at least one copy of the mutation.

A similar drug, Kalydeco, was approved eight years ago, but it worked in only 8% of patients; and the improvements are not as dramatic.

A study of 403 patients for six months (some taking the drug and some taking a placebo) showed Trifakta normalized chloride levels in sweat, improved lung function by 14% and increased body mass.

A small number of patients participated in the study through Washington University, and though doctors did not know who was receiving the drug or placebo, it was obvious, said pulmonary disease specialist Dr. Daniel Rosenbluth. Other severely ill patients have been able to get early access to the drug.

“They feel like they are totally different people,” Rosenbluth said. “I had a man whose wife kept waking him up at night because he was sleeping soundly and his wife thought he was dead.”

Because results were so swift and dramatic, doctors have for nearly a year been telling their patients that a promising drug was coming.

“We would tell families, ‘OK, get ready, because we are entering a very different time,’” Ferkol said.

The Food and Drug Administration reviewed and approved Trifakta in just three months.

Doctors attribute the success to the Cystic Fibrosis Foundation, which over 20 years ago began working with a network of academic centers and organized patients for research studies. This made it quicker and easier for pharmaceutical companies to test drugs in development.

“Other rare diseases have been trying to duplicate this model,” Rosenbluth said.

The drug, made by Boston-based Vertex Pharmaceuticals, comes with a hefty price tag — $311,000 a year. Patients are now wading through the process of seeking coverage through their public or private health insurance.

Patients still must continue their daily treatment regimens while taking the new pill, Ferkol stressed. The drug has been studied for only a short time, but the hope is that the drug greatly slows the progression of the disease over one’s lifetime.

When Ferkol was a resident doctor in 1985, the life expectancy for a patient with CF was just 23 years old, he said.

“This drug is opening up all kinds of possibilities I never dreamed to imagine when I was much younger,” Ferkol said. “If you can intervene early, before damage has occurred, can that profoundly change the trajectory of the disease? It’s going to be a very exciting time.”

While it’s not a cure, it is a drug families and doctors have long been waiting for. Studies are already underway in children ages 6 to 11.

“Many families have hoped for a day that we could have something we could do for their children that is going to have the effect that this drug has,” Ferkol said.

Hannah Krumrey, 20, of St. Charles, is waiting on her insurance to approve her application for the drug; while her older sister, Kayla Krumrey, 21, was able to get the drug early and has already been able to sleep through the night and have more energy to get through the day.

The sisters recently went to Greece, and they hope to be able to travel more together.

Their father died a year ago. Hannah Krumrey wishes she could celebrate the drug’s approval with him.

“We know how happy he would be. This was like, his dream. This was all he ever wanted,” she said. “He will still be happy from up there, but I wish he was here to experience it with us.”

Just nine days after the new drug was approved, the Cystic Fibrosis Foundation unveiled its “Path to a Cure” plan — challenging scientists around the world to submit proposals that would accelerate finding a cure and allocating half a billion dollars to fund the research through 2025.