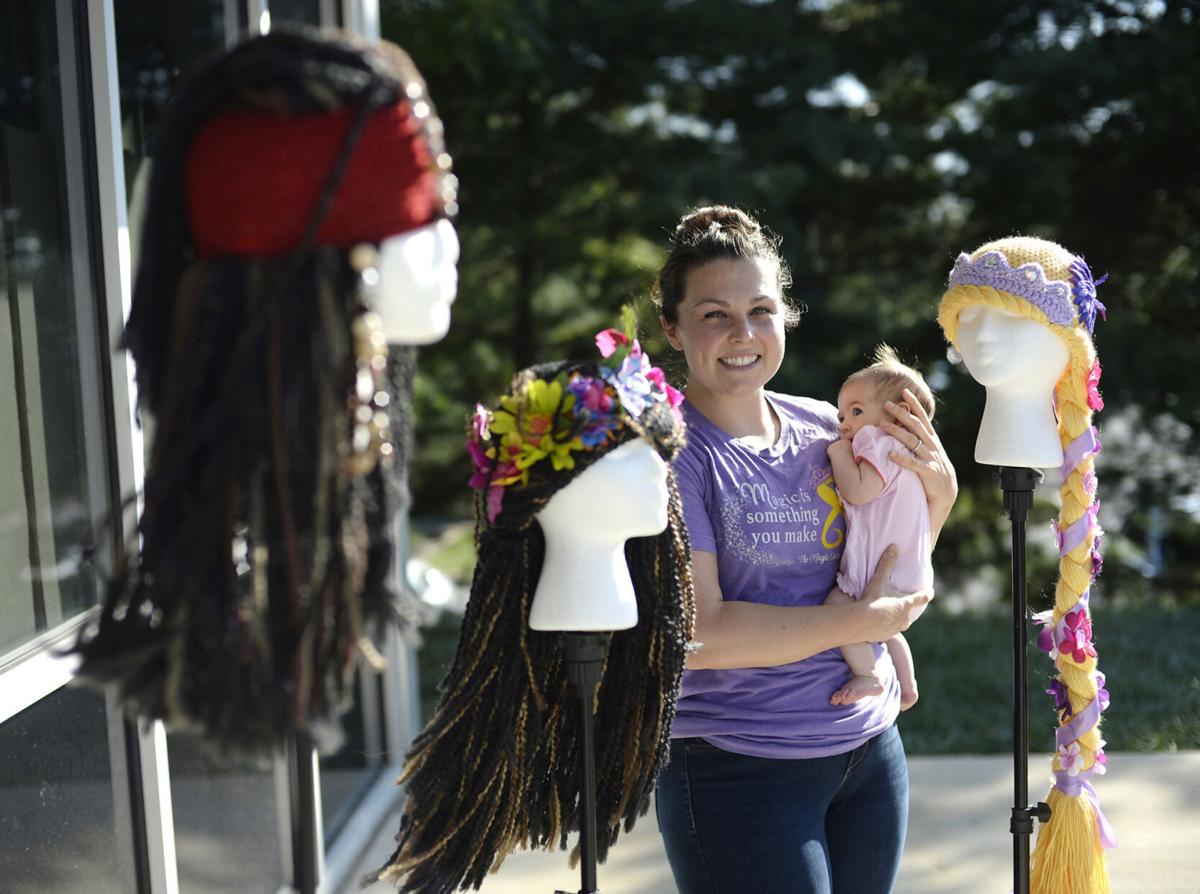 Brittany Harrison, holding her 2-month-old daughter Quinn, creates princess and pirate wigs and hats for children with cancer for the nonprofit Magic Yarn. For the month of September, Childhood Cancer Awareness Month, she and HoCo Pirate Adventures, a dad who hosts treasure hunts, are hosting a Y-arrr-n Drive at So Original, a yarn shop in Columbia, Md. Dylan Slagle/Baltimore Sun/TNS 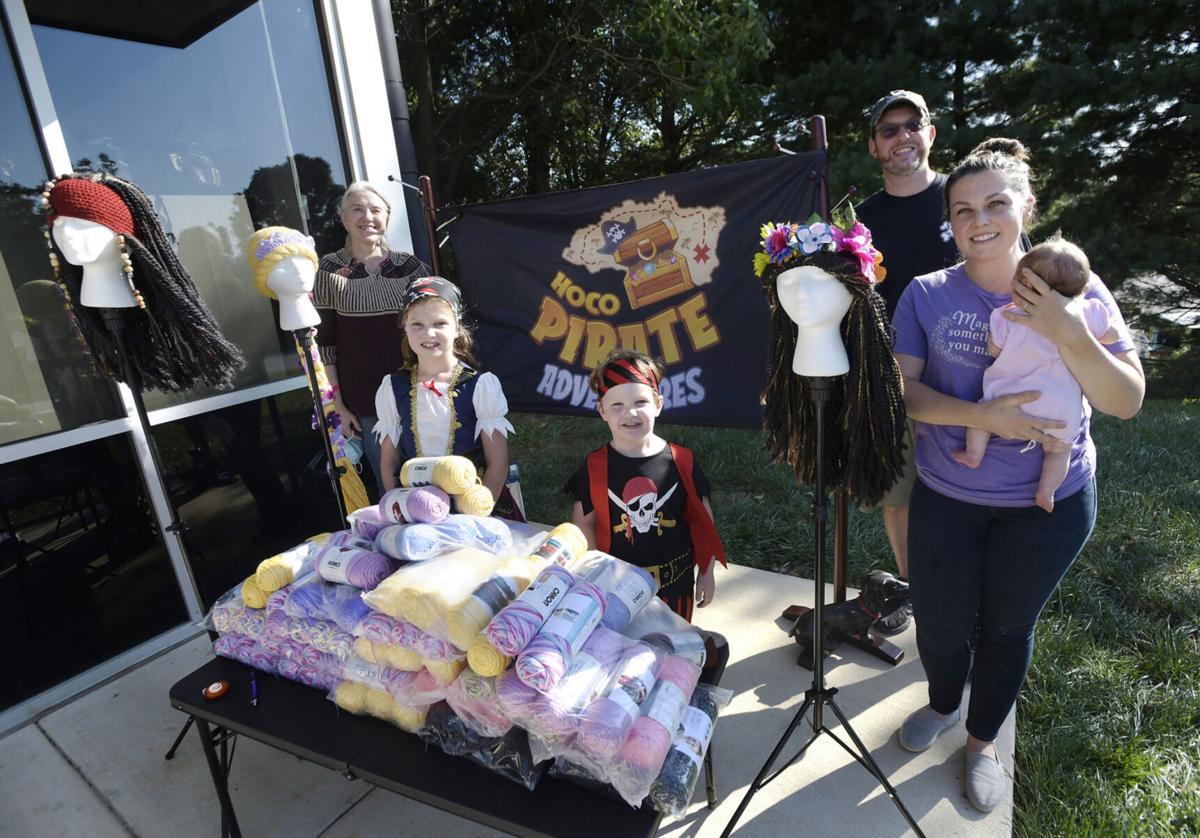 Brittany Harrison, holding her 2-month-old daughter Quinn, creates princess and pirate wigs and hats for children with cancer for the nonprofit Magic Yarn. For the month of September, Childhood Cancer Awareness Month, she and HoCo Pirate Adventures, a dad who hosts treasure hunts, are hosting a Y-arrr-n Drive at So Original, a yarn shop in Columbia, Md. Dylan Slagle/Baltimore Sun/TNS

Delivered by pirates to So Original Yarn Studio in Columbia, Md., a large box filled with skeins of multicolored yarn was indeed a treasure chest for recipient Brittany Harrison.

As the Baltimore area chapter leader of the Magic Yarn Project, a nonprofit that provides free character wigs to children dealing with cancer and other medical hair loss, Harrison will create mermaid wigs and the pirate Jack Sparrow’s famous locks with the help of a generous donation by HoCo Pirate Adventures, a pirate-themed scavenger group, for the month of September — national Childhood Cancer Awareness Month.

“The whole situation is really three separate, really beautiful stories,” said Harrison, of Sykesville. “I love the idea of what we can all accomplish together, the ripple effects just from one thing.”

It begins with Harrison, who first started crocheting character hats for her children as a hobby in 2016. When she discovered the Magic Yarn Project on Facebook, she started shipping her creations to its headquarters in Alaska until the nonprofit started different chapters around the country in 2019.

Now, she delivers her creations to local charities, including Casey Cares Foundation, which is based in Baltimore, and the Ronald McDonald House Baltimore. She has also delivered wigs to Chai Lifeline Mid-Atlantic Region and Sinai Hospital, as well as individual requests.

“There is so much need locally,” Harrison said. “This is a huge yarn donation. A hundred skeins of yarn is 75 wigs. That’s huge.”

Chris Fuchs, head pirate of HoCo Pirate Adventures, donated $700 to Harrison’s Magic Yarn Project chapter after she approached him over the summer with the idea.

Since July 2020, Fuchs has been organizing monthly pirate-themed scavenger hunts for youth throughout Howard County. The hunts are typically available 24/7 for about 10 days, with treasure maps available to download for a $5 donation. A portion of the fee is used to purchase “treasure” for the hunts and another part is used to give back to the community, Fuchs said. Past donations have been to organizations such as Howard County Special Olympics and the Howard County Police Department.

“I always try to go local,” said Fuchs, who requested that Harrison find a local yarn shop to make her purchase.

That request wasn’t easy, Harrison said, as many of the smaller yarn stores were unable to order the mass-produced yarn Harrison requested for the wigs. Enter Lana Ford, who reopened her store, So Original Yarn Studio, in July after relocating it from Olney to Columbia.

“They are so beautiful,” Ford said. “They are quite elaborate these wigs. Very labor-intensive.”

Before the coronavirus pandemic, Harrison would host events with volunteers — everyone from Scouts and youth groups, to mom groups and friends — working together to complete a wig.

“Instead of paint night, you go out with friends and do the same sort of thing but work on a wig and do something good,” Harrison said. “I would bring the beanies and they would attach the yarn and add the ribbons, rhinestones, whatever that character needed.”

Harrison is thankful for the support Fuchs and Ford have provided and is excited to bring more attention to the Magic Yarn Project.

“When you see what all these kids are going through, it’s heartbreaking,” Harrison said. “This is all for the kids.”