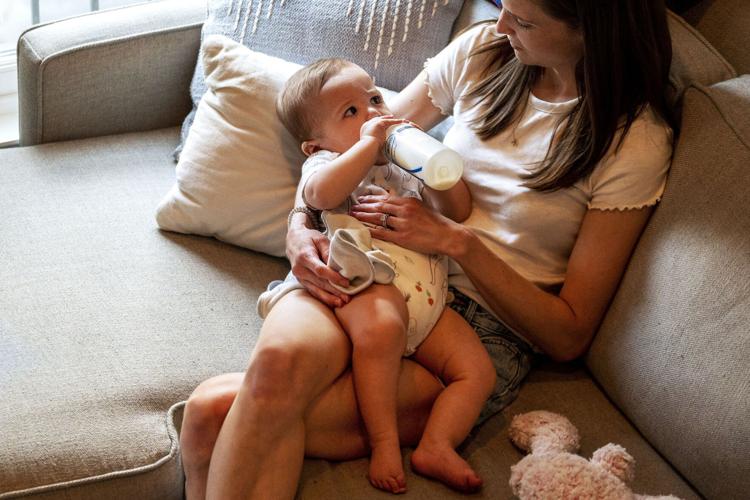 Liz Lockerman feeds her 8 month-old son, Logan, a bottle of infant formula at home May 31. The infant formula shortage has exacerbated the stigma parents feel when they don’t breastfeed. Tom Gralish/Philadelphia Inquirer/TNS 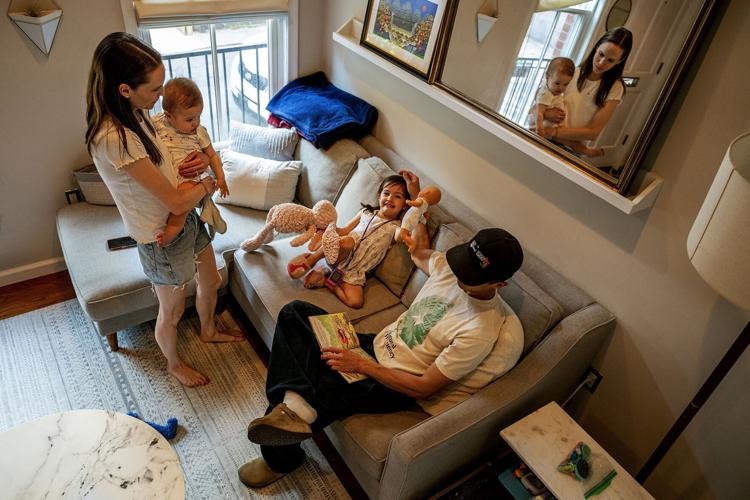 Liz and Matt Lockerman at home with Logan, 8 months, and Sophie, 3 1/2, May 31, 2022. Lockerman struggled for weeks to breastfeed Sophie before reluctantly switching to formula. When Logan struggled to breastfeed, she made the switch with less guilt. Tom Gralish/Philadelphia Inquirer/TNS

Liz Lockerman feeds her 8 month-old son, Logan, a bottle of infant formula at home May 31. The infant formula shortage has exacerbated the stigma parents feel when they don’t breastfeed. Tom Gralish/Philadelphia Inquirer/TNS

Liz and Matt Lockerman at home with Logan, 8 months, and Sophie, 3 1/2, May 31, 2022. Lockerman struggled for weeks to breastfeed Sophie before reluctantly switching to formula. When Logan struggled to breastfeed, she made the switch with less guilt. Tom Gralish/Philadelphia Inquirer/TNS

PHILADELPHIA — First-time mom Liz Lockerman prepped to breastfeed by taking classes, reading books and practicing different baby-holding positions. She even bought a freezer for the basement, in anticipation of building a stash of frozen breast milk for when she returned to work.

But nothing went as planned after the birth of her daughter, Sophie. They struggled so much with feeding that Sophie eventually ended up in the hospital with dehydration. Finally, a therapist convinced the exhausted and stressed-out new mother that it was acceptable to feed her baby formula.

“Society puts this shame and stigma on formula,” said Lockerman, 36, of Philadelphia. “There should not be any shame in how you choose to feed your baby.”

New parents are inundated with messages about the importance of breastfeeding. The American Academy of Pediatrics recommends exclusively breastfeeding babies for the first six months of life, then transitioning to a combination of solid foods and breast milk until they are a year old. Hospitals earn a World Health Organization “baby-friendly” designation by encouraging parents to breastfeed as soon as possible after birth and limiting access to formula unless medically necessary.

Though well-intentioned, the “breast is best” campaign has put enormous pressure on parents — some say at the expense of their own emotional well-being — and contributed to the stigma of switching to formula “by choice.” Now a national formula shortageis bombarding parents with new guilt from outsiders telling them they would have food for their baby if they’d just breastfeed.

“It’s so unfair that parents are getting caught up in ‘Which camp am I in?’ and “Did I do the right thing?’” said Katy Baker-Cohen, who makes free home visits to new parents as a lactation consultant and nurse for Philadelphia’s Nurse-Family Partnership. “There is research to support that human milk is ideal for babies. But there’s also research that parents who are mentally stable are also ideal for babies.”

Breast milk is considered the “ideal food” for infants because it is loaded with the nutrients babies need to grow. The content of breast milk even changes from week to week to meet the baby’s current needs, such as providing extra antibodies when the baby is sick. For many parents, breastfeeding is a treasured bonding experience with their newborn.

Commercial infant formula, designed to mimic the vitamin and mineral content of breast milk, is regulated by the U.S. Food and Drug Administration. Compared to breast milk, research has found formula is associated with a higher rate of infections and gastrointestinal issues, though other studies have concluded the differences are smaller than once believed.

Breastfeeding is difficult and time consuming — newborns need to eat every two to four hours around the clock. Doctors advise against giving babies bottles, even if they contain breast milk, until at least three weeks, to ensure sustainable breastfeeding practices.

This isn’t always possible for parents who can’t take extended parental leave and whose workplaces don’t give time to pump or space to store milk. Same-sex couples, adoptive parents, people who have had cancer, or those with other underlying health conditions may not have the option of breastfeeding.

The vast majority of infants are initially breastfed, but only a quarter are still exclusively breastfeeding at six months, according to the U.S. Centers for Disease Control and Prevention.

Too often, families don’t get the help they need when they need to work through challenges, said Baker-Cohen, the Philadelphia lactation consultant.

“You need someone at your side the day you come home, and that’s not a reality in our health care system for most people,” she said.

Private health insurance often covers visits with a certified lactation consultant, but it may not be possible to get an appointment right away — especially during a pandemic, when in-person contact is limited.

Breastfeeding resourcesfor new parents with Medicaid, which pays for health care for low-income families and pregnant people, vary by state. Many cover lactation consultations in the hospital, but not home visits. Pennsylvania and New Jersey cover breastfeeding education, but are among the minority of states that do not cover lactation consultations in the hospital or at home, according to an analysis by the Kaiser Family Foundation.

Even with support, feeding a baby can be overwhelming for a parent who is sleep-deprived, recovering from a major medical event, and often trying to adjust to a new lifestyle.

When breastfeeding is not going well, a parent’s mental health can suffer. They can feel inadequate if they don’t think they’re producing enough milk and be in pain if the baby cannot properly latch on. In more severe cases, nursing parents may experience severe and sudden negative feelings just before they breastfeed, a condition called dysmorphic milk ejection reflex.

At some point, parents struggling to breastfeed must decide whether the benefits of breast milk are worth any detriment to their own health, said Sara Kornfield, a clinical psychologist and assistant professor at the Perelman School of Medicine at the University of Pennsylvania.

“The benefit to a child of having a happy, healthy, well-adjusted mom may outweigh the small difference in infection rates,” said Kornfield, who also works as director of the maternal wellness initiative at the Hospital of the University of Pennsylvania.

Still, parents often struggle with the decision to switch to formula, especially if they were committed to the idea of breastfeeding, she said.

“Letting go of that expectation can be challenging because of what we hear about ‘breast is best,’” she said. “We come to assume that formula is less than best.”

This was Lockerman’s experience after her daughter, Sophie, struggled to latch properly. She worried constantly that her baby wasn’t getting enough to eat.

Her fears were confirmed when Sophie was readmitted to the hospital for dehydration. Still, doctors and nurses encouraged Lockerman to keep trying to breastfeed.

So she kept trying — alternating nursing and pumping in an attempt to increase her milk supply. After a month of exhaustion, stress, guilt, and feelings of inadequacy, Lockerman’s therapist helped her to break free from the stigma and try formula.

“It was a light-bulb moment: I can feed her formula and she will be fine,” Lockerman said, “and I will be able to be her mother.”

Lockerman decided to try breastfeeding again. But when her son, Logan, didn’t take to it after several days, she bought some formula without guilt.