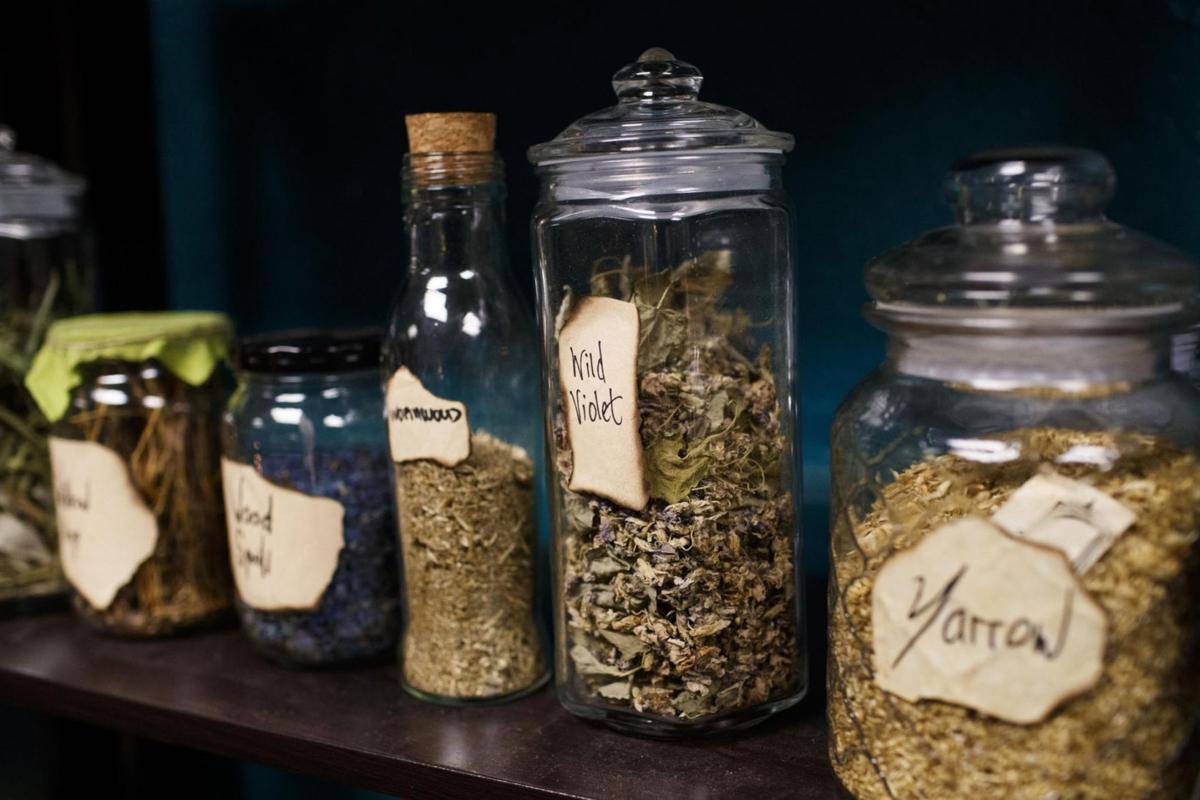 Herbs and other ingredients used in spells and potions are sold at Malliway Bros. Spells, Charms & Potions in Chicago. Armando L. Sanchez/Chicago Tribune 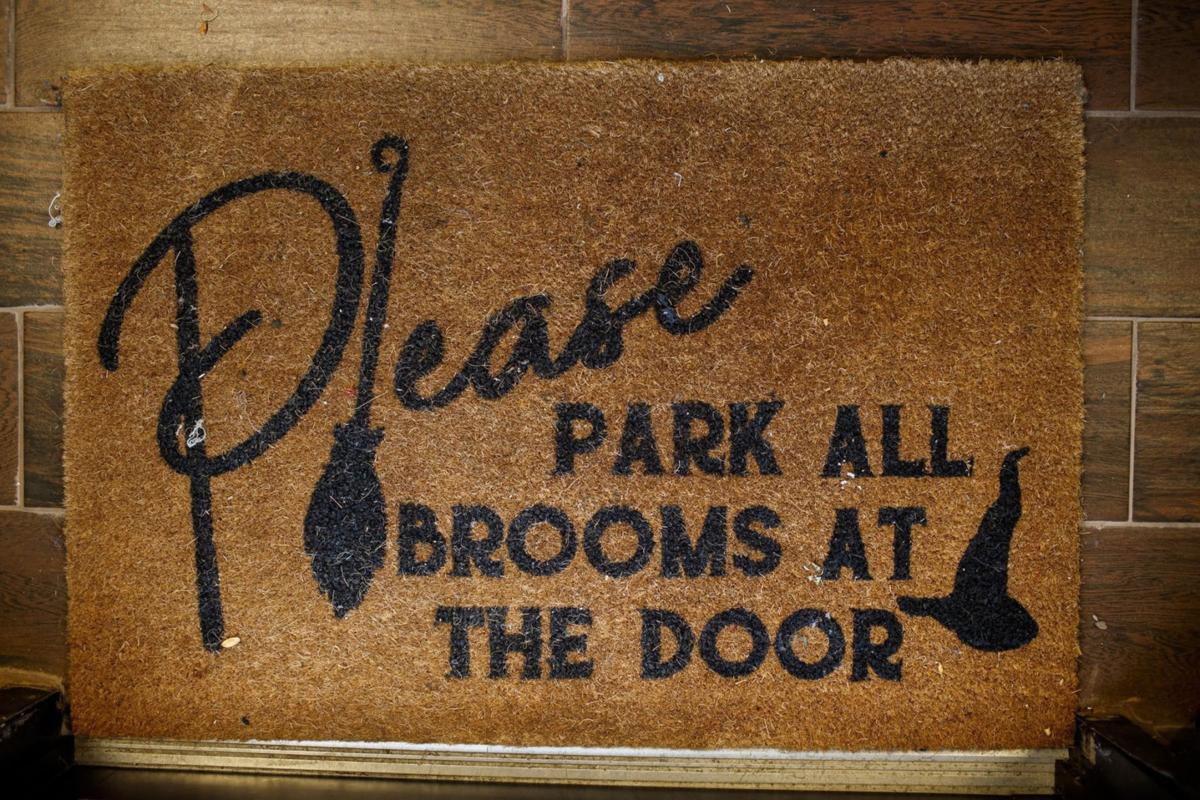 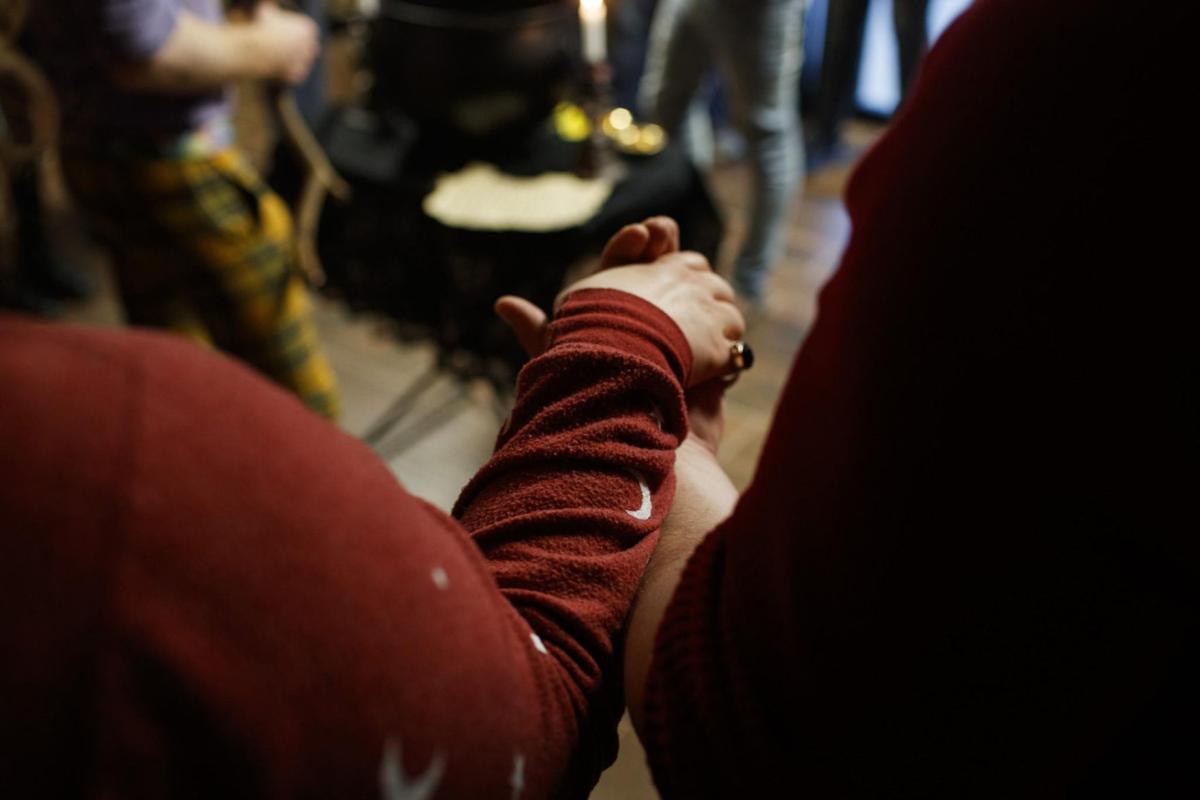 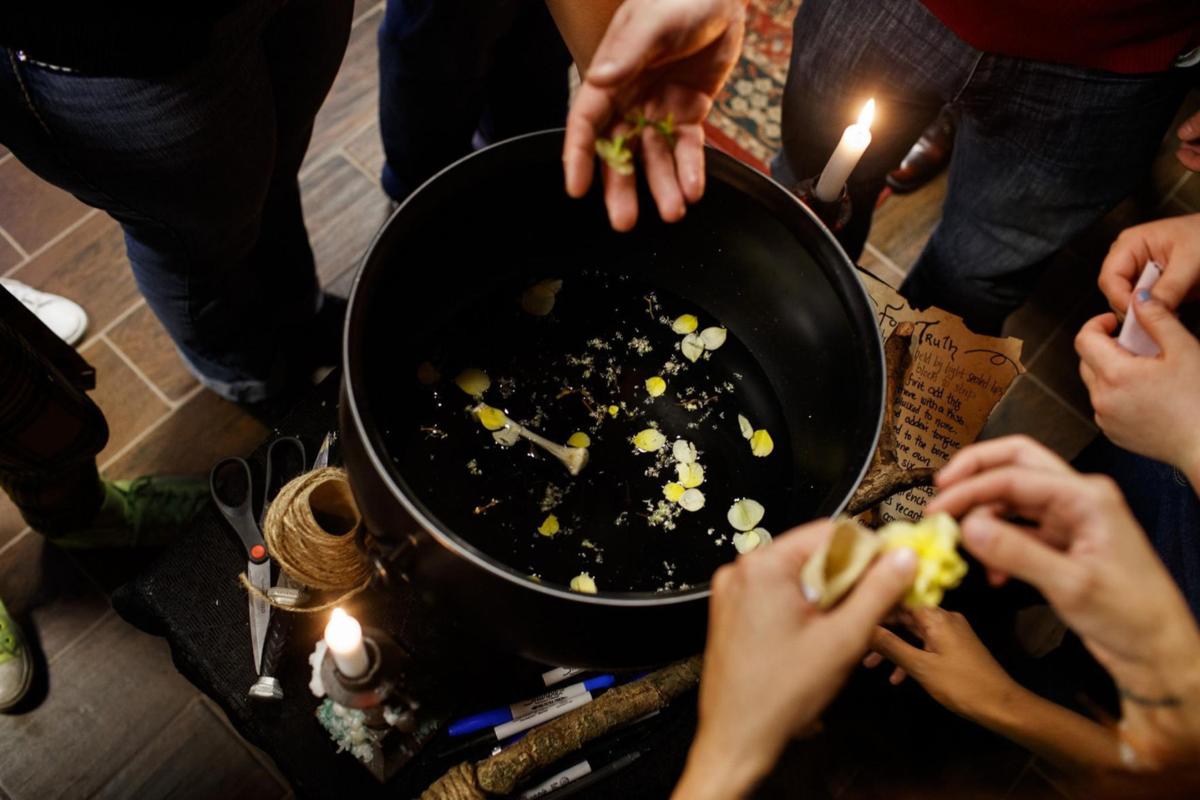 Participants place flowers, snake root, a bone and other ingredients into a potion during a full moon ritual at Malliway Bros. Spells, Charms & Potions on Oct. 13 in Chicago. Armando L. Sanchez/Chicago Tribune

Standing hand in hand, they form a circle around a smooth black cauldron, their voices setting off a reverberating hum as they repeat, “Omm, omm, ommm.”

Outside twilight is approaching. Inside the Malliway Bros. witchcraft shop in Rogers Park, candles burn and the smell of incense hangs in the air.

Twenty-one guests, some seasoned witches, some curious newcomers, have gathered for a full moon ritual in which Latin chants will be recited and lavender-scented “moon oil” applied. Friends and strangers will bond, flower petals will swirl alongside spit and parchment, and a big plume of filmy whiteness — smoke? steam? something else? — will rise from the cauldron right on cue.

The ritual, performed earlier this month by the Witches’ Conclave Meetup, is one of many signs that witchcraft is gaining ground, particularly among millennials in search of spiritual meaning. The Witches’ Conclave, which has grown to more than 430 members in less than three years, moved to a larger space in August after its workshops repeatedly sold out overnight.

The hashtag witchesofinstagram is tearing through social media, with over 3.4 million posts. Witchcraft provisions are available via a range of monthly subscription boxes, which have in turn spawned YouTube unboxing videos garnering as many as 190,000 views.

The phenomenon has reached as far as Urban Outfitters, which sells Ritual Kits with sage, “love oil” and crystals.

The newcomers go for spells, crystals and forms of divination such as tarot cards, said Dulcis. They’re not typically involved in religions like Wicca, but they may be interested in learning about them.

The Rogers Park ritual drew a casually dressed crowd with a smattering of nose rings and irreverent T-shirts: “Please don’t touch me, I’m a service dog.”

“I saw this event on Meetup, and I’m like, ‘Why not?’ I’ve always been interested,” said Elena Ivanovska, 30, who was visiting from Phoenix, where she works in finance.

Ivanovska said she already does moon-related meditations and wanted to learn more about the moon’s power.

Marty Severino, 25, of Niles, said he started reading up on witchcraft after a friend lent him some books. Today, he considers himself a witch but one who practices independently, without a coven or a priest.

“I think there’s just so much hopelessness in the country right now, with the political climate, that people are trying to reach out to something,” Severino said. “People are trying to regain some sort of power within themselves when they have no power in their environment.”

Experts offered many reasons for the popularity of witchcraft among young people, including that it’s a very customizable experience; it values sex, the human body and the natural world; and it’s free from the male power structures that frustrate many women and LGBTQ people.

Pam Grossman, author of “Waking the Witch: Reflections on Women, Magic and Power,” also points to the hands-on, DIY aspect of witchcraft.

“The more digital we are, the more we long for sensory experiences,” she said.

“Withcraft is so super-sensory. Not only is it honoring nature and the body, but there are beautiful objects, and candles and this really creative experience that you’re having because you’re crafting your altar. Many of us use tools like tarot cards and beautiful flowers. It’s a really lush experience that is very tactile and just aesthetically stimulating.”

Blake and Wycke Malliway, the brothers behind the witchcraft store and the full moon ritual, said they worried that neighbors at their last location, a cheerful red brick apartment building in East Rogers Park, would be uncomfortable with their witchcraft.

The Malliways were highly secretive at first, but eventually they did put up a “Witches’ Conclave” sign, and a funny thing happened: People in the building just kept stopping by, offering supplies such as herbs, incense and twine.

“There were so many witches in the building,” Wycke, 28, recalled.

Grossman said that every wave of feminism has been accompanied by new interest in witches. In the 19th century, writers started re-examining witch trials and romanticizing the accused.

Blake is dressed all in blue for the full moon ritual, with a wedge of straight brown hair standing up at a gravity-defying angle. Wycke, in contrast, wears a purple shirt, a bow tie, neon high-tops and orange plaid pants. His hair falls in blond waves around his ears.

But if they’re a visual study in contrasts, both Malliways are warm, engaging and quick with a quip. They start the meetup with introductions, in which everyone says his or her favorite horror movie, and the crowd is quick to jump in, embracing unusual choices.

The ritual involves writing down a question on a little piece of paper — something participants want to know the truth about. Blake sprinkles the pieces of paper with a mysterious gray powder, and each person wraps his or her paper in parchment, before submerging it in a cauldron containing flower petals, botanicals, spit and human hair.

When the ritual ends, the participants snack on Oreos and rice crackers. The mood is upbeat, with several people saying that public interest in witchcraft still hadn’t peaked.

In her signoff for her podcast, Grossman takes that logic one step further.

New ‘Hocus Pocus’ in the works at Disney

In 1693, the townspeople of Salem tried to get rid of them. In 1993, a couple of teenagers and a cat named Thackery Binx tried, too. Now the S…

Many of us use tools like tarot cards and gorgeous flowers. Using supplies such as herbs, incense, and twine. Order our Spells, Appeals, & Potions. We also offer effective hands-on, DIY elements of witchcraft. voodoo spells to get a lover back