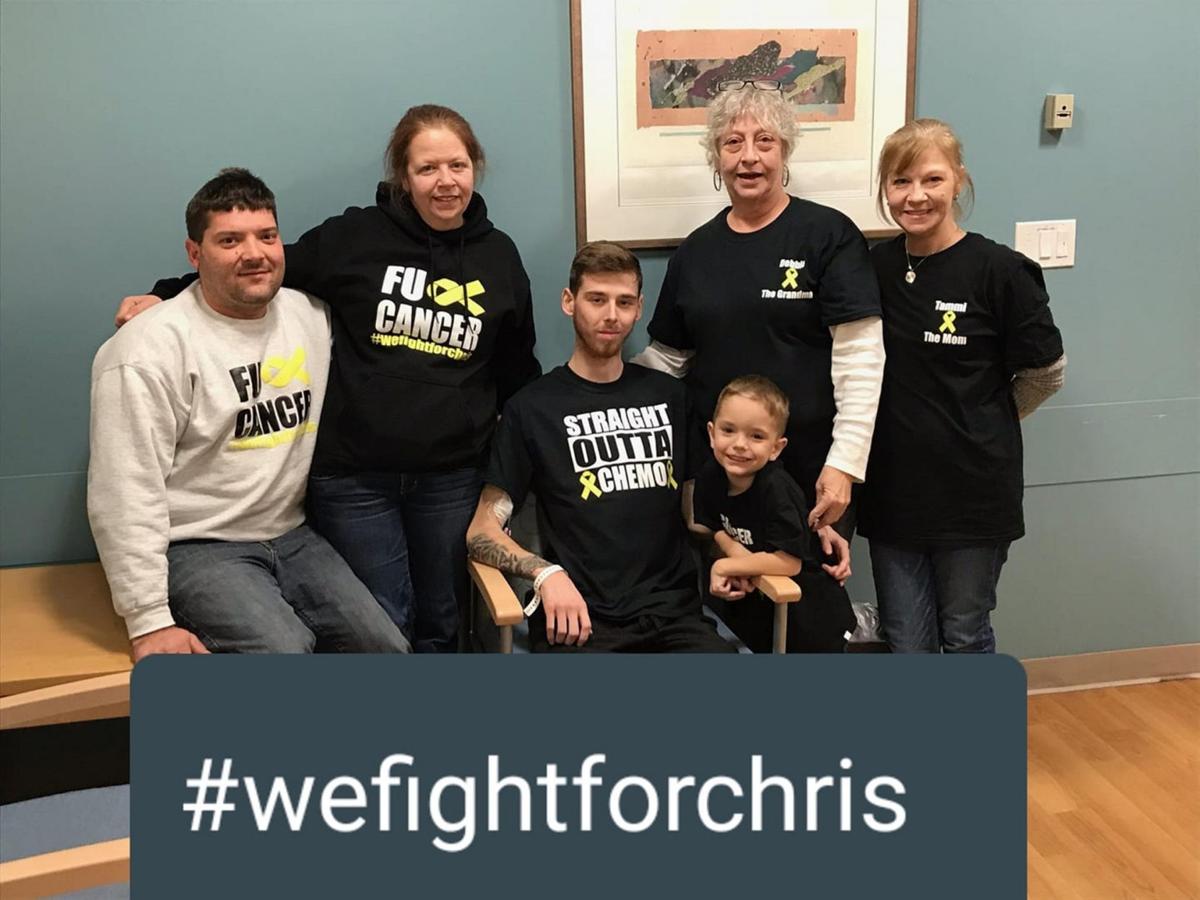 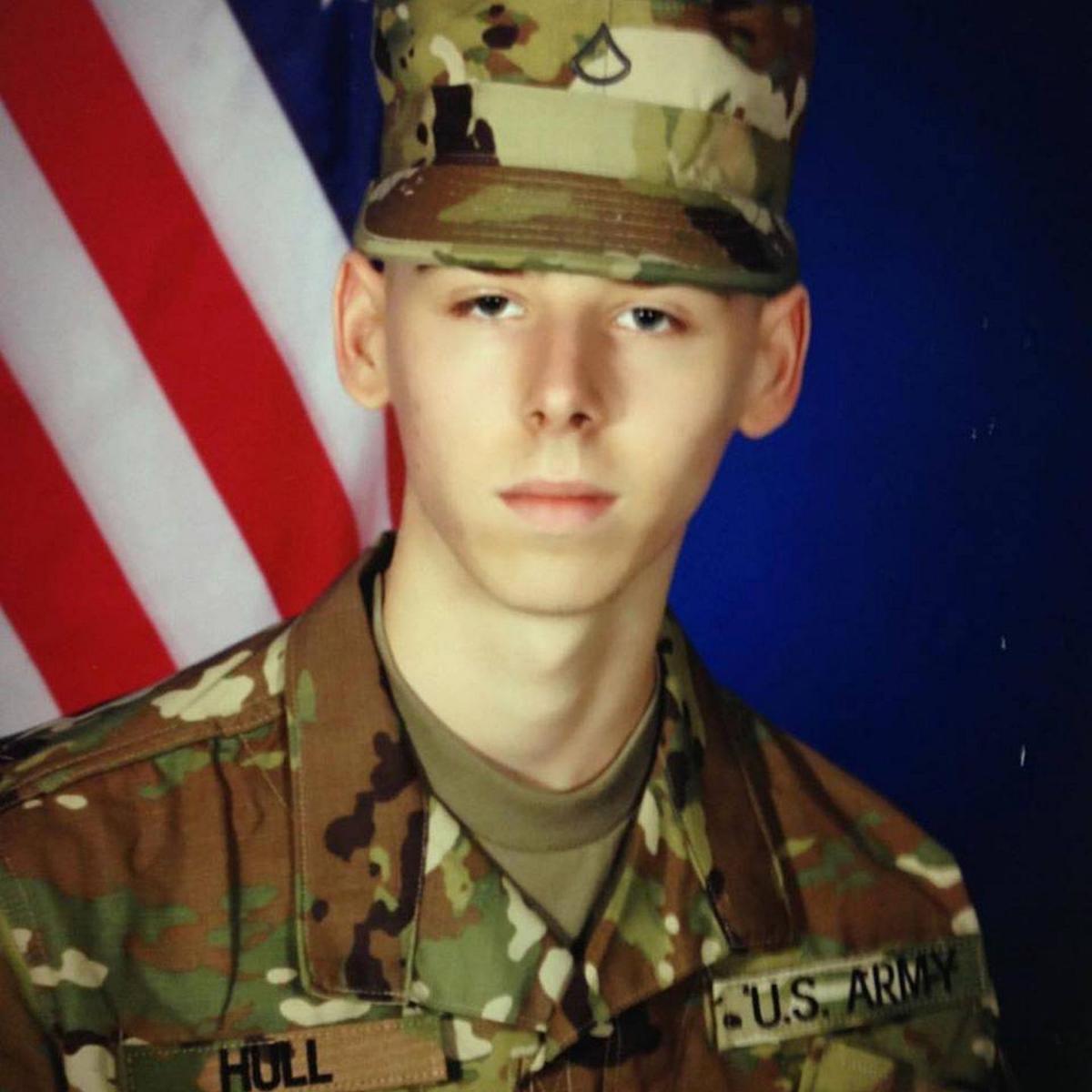 Christopher Hull, who was diagnosed with Ewing’s Sarcoma in October, in his Army uniform. Provided photo 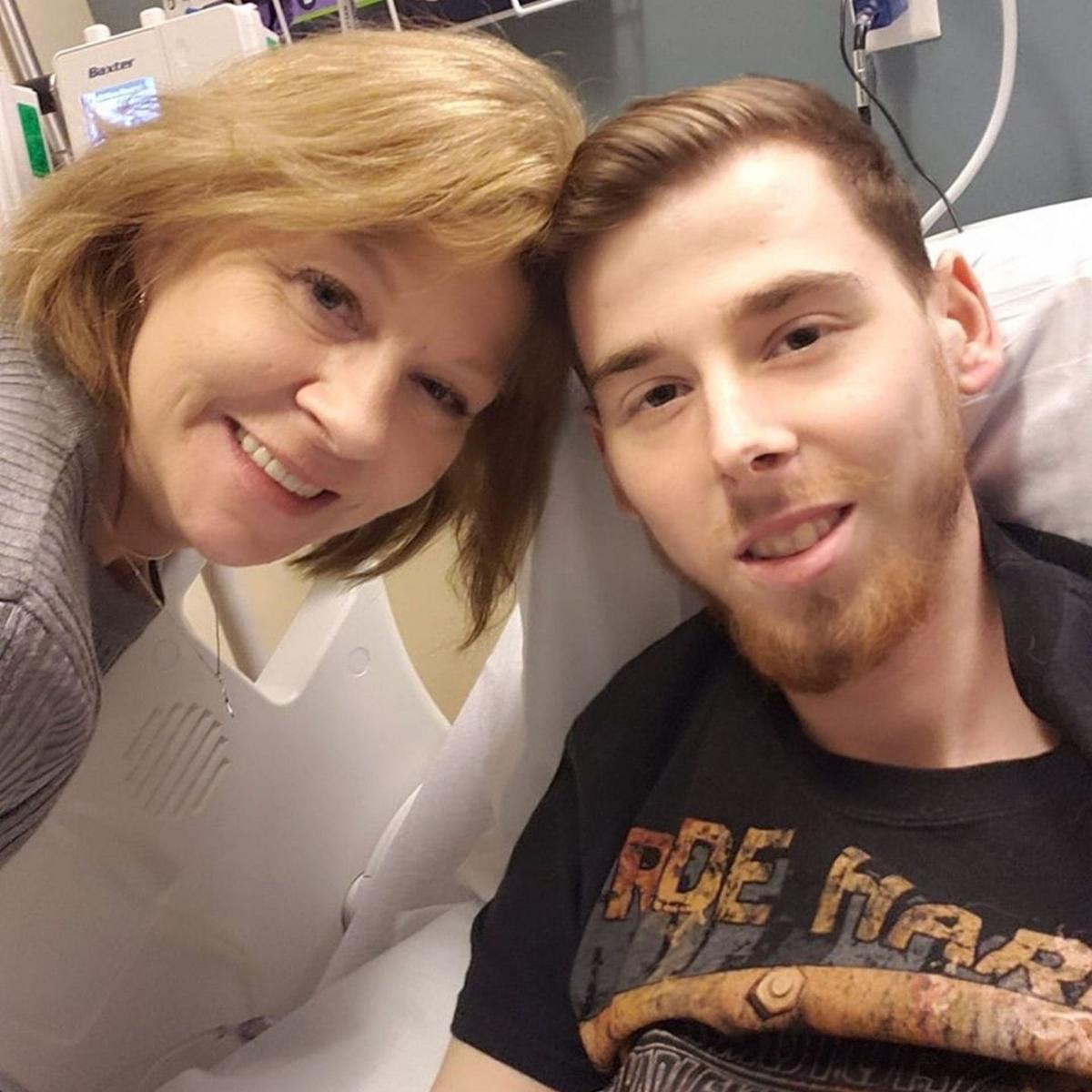 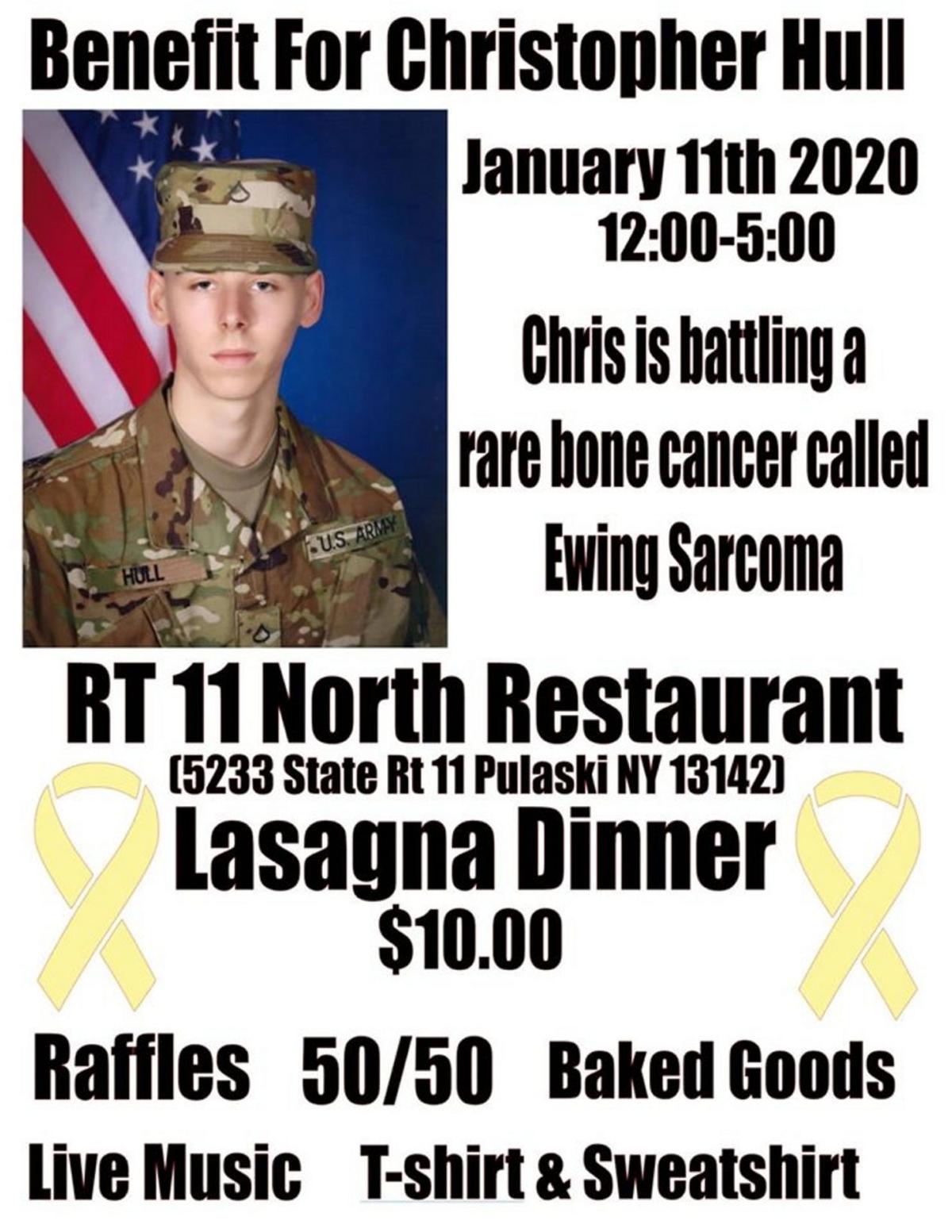 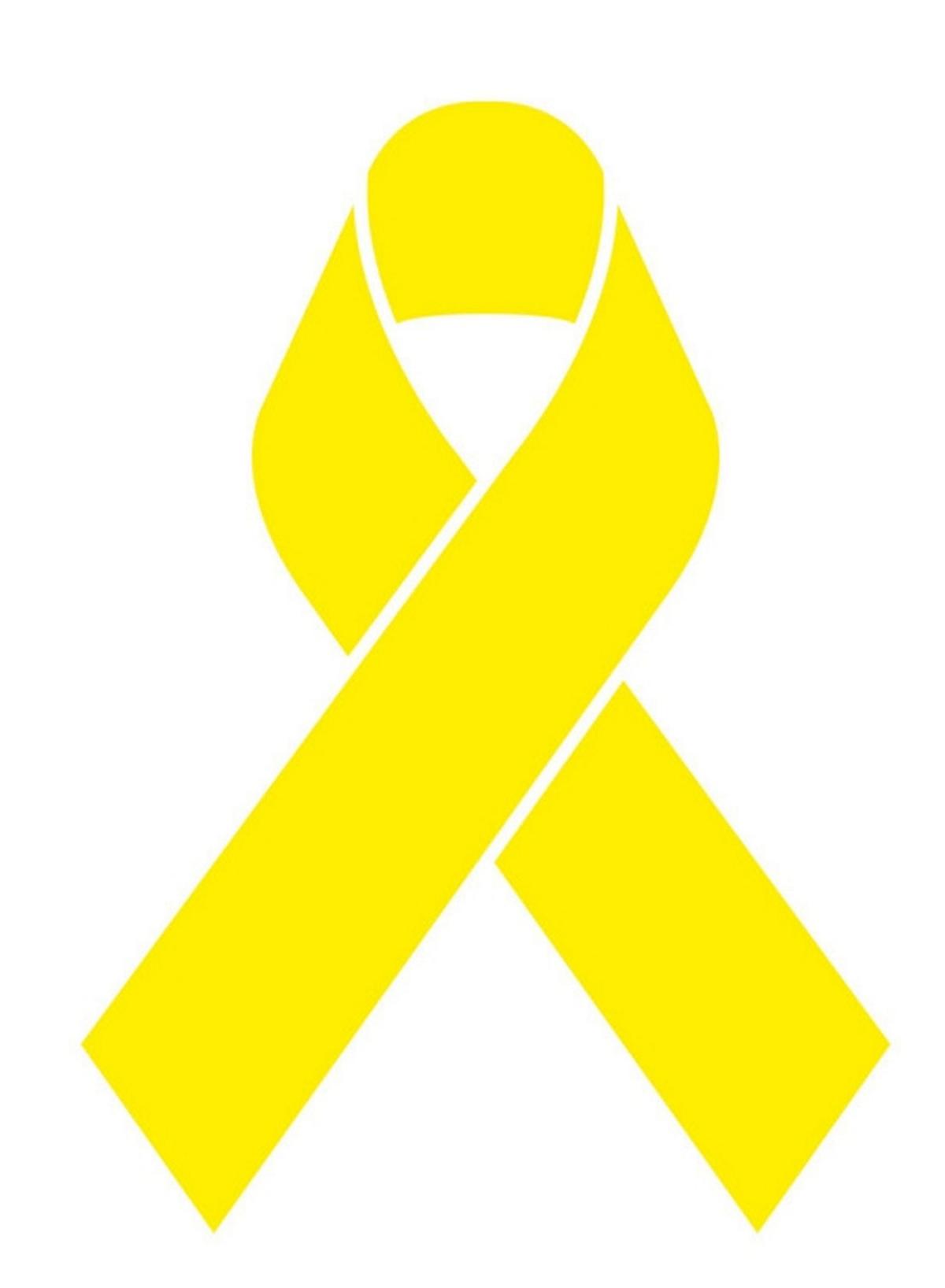 Christopher Hull, who was diagnosed with Ewing’s Sarcoma in October, in his Army uniform. Provided photo

PULASKI — At the age of 22, following months of pain and misdiagnosis, Christopher “Chris” Hull was diagnosed with a sacral mass on Oct. 28, which was then confirmed to be Ewing’s sarcoma.

“It was definitely heavy, for lack of a better word,” he said. “I couldn’t really take it in for a couple weeks. It was something that was kind of hard to believe.”

Among the rarer forms of cancer, Ewing’s sarcoma grows in the bones or the soft tissue around the bones, such as cartilage or nerves.

The need for more specialized treatment has required him to be transported from medical facilities in Syracuse to the Dana-Farber Cancer Institute in Boston.

At Dana-Farber/Brigham and Woman’s Hospital, the family was informed that Chris’s tumor of the sacrum, the bone at the base of the spine, had metastasized to include his hip, spine, femur and arm, which was classified as stage IV, so he immediately began chemotherapy and radiation.

Chris recently completed his radiation as scheduled, and has begun chemotherapy as well as having undergone two blood transfusions.

Chris’s mother, Tammi Hull, said despite the expected effects of the treatment, Chris is doing well. However, less than three weeks into his treatment, his father, Shaun Hull, was diagnosed with lung cancer.

After being treated for bronchitis, and later pneumonia, a CT scan identified a tumor in Shaun’s right lung. Following a PET scan and biopsy, it was diagnosed as non-small cell cancer, so he also was referred to Boston.

Shaun received his diagnosis on Nov. 19 at the age of 52, with his wife and son in Boston for treatment. Just days later, on Nov. 22, Shaun’s father, John, died of colon cancer at the age of 77.

With both Chris and Shaun now in Boston for treatment, they, along with Mrs. Hull, are staying at the American Cancer Society’s Hope Lodge, with both Shaun and Chris taking part in a research program at Dana-Farber in the search for a cure.

Saturday’s benefit, which was started by Shaun, has been taken over by Chris’s cousin Haylea Hull, who manages a store in Mexico and balances the responsibility of raising a 2-year-old along with organizing donations for the benefit.

“I can’t donate financially, so I figured the least I can do is their benefit,” she said.

Born on Jan. 1, 1997, the youngest of three children, Chris graduated from Pulaski High School in 2012 and attended Oswego County BOCES for Public Safety. After graduating, he joined the Army National Guard as a military police officer with a unit in Utica, also working out of the Oswego office and Fort Drum as a recruiter.

He was most recently employed by FX Caprara Harley-Davidson in Adams as a salesman and is fondly known as “Slim.”

In Boston for the foreseeable future, Chris is receiving blood transfusions, shots for his platelet counts, and anything else he needs in his fight against the disease. He spent his 23rd birthday and Christmas at the facility.

Though they can’t attend in person, the Hulls will be Skyped in from Boston so they can see the generosity of the community with their own eyes.

“I’ve been to plenty of benefits and I don’t think I’ve ever seen this many donations at a benefit before,” Ms. Hull said. “Teana (Goudy, the owner of 11 North) has also been storing our baskets, which has been super appreciated because my room had like 20 baskets in it and I couldn’t walk through it.”

Ms. Goudy has known the Hull family since she opened her business about 6½ years ago and said she decided to donate the bar as the venue for the benefit and cover all the lasagna dinners.”

“It’s a small town, a small community. I think our community is all we have,” she said. “Cancer hits all of us. My mom passed away from it, so you just do what you can.”

Upwards of 72 raffle items have already been collected from local businesses and individuals, with more coming in this week leading up to the benefit. Big ticket raffle items include a chainsaw, a power washer and a fishing trip.

Lasagna dinners will be sold for $10 per plate, with all proceeds going directly to the Hull family.

“The generosity has been outstanding. We’re just in awe,” Mrs. Hull said. “We went from being a three income family to all of us being out of work and here in Boston, so we can’t thank people enough.”

After a family member made T-shirts that say “We Fight for Chris,” people around town started wearing them. Chris said that even people he thought disliked him or that he hadn’t spoken to in ages reached out to see how the family is doing and asked if they could help.

Through his diagnosis and resulting treatments, one thing that hasn’t seemed to change is Chris’s outlook on life.

“He’s been in just great spirits through the whole thing and it just blows my mind how upbeat he’s been considering he’s sick, his father is sick and he just lost his grandfather,” Ms. Hull said.

According to Haylea Hull, when Chris was first going through his treatments, he was more worried about the kids in the hospital next to him who had been there longer than he had. Now, he is in constant disbelief over how his community has rallied to support his family.

“The outpour has been unreal. I’m beyond grateful for everything that everyone’s doing, especially Haylea,” Chris said. “Obviously the cancer experience is rough, but I’m just making the best of it, going day by day.”