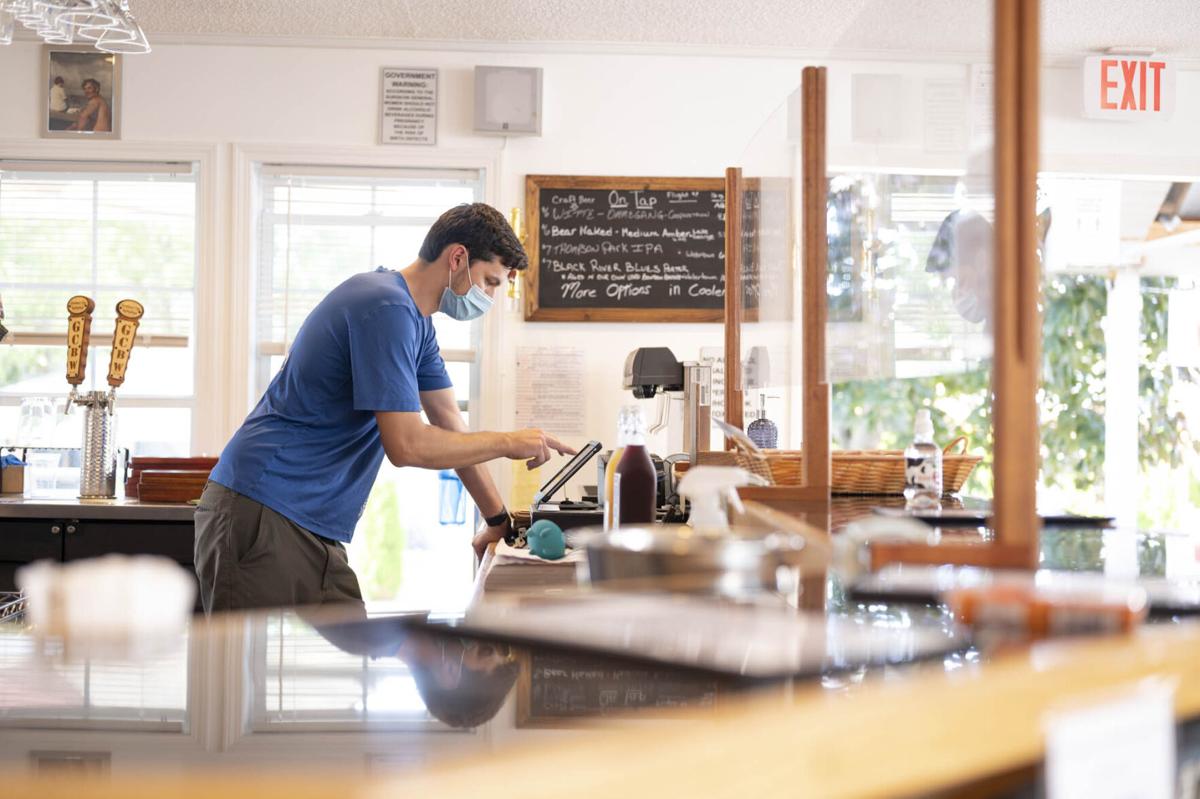 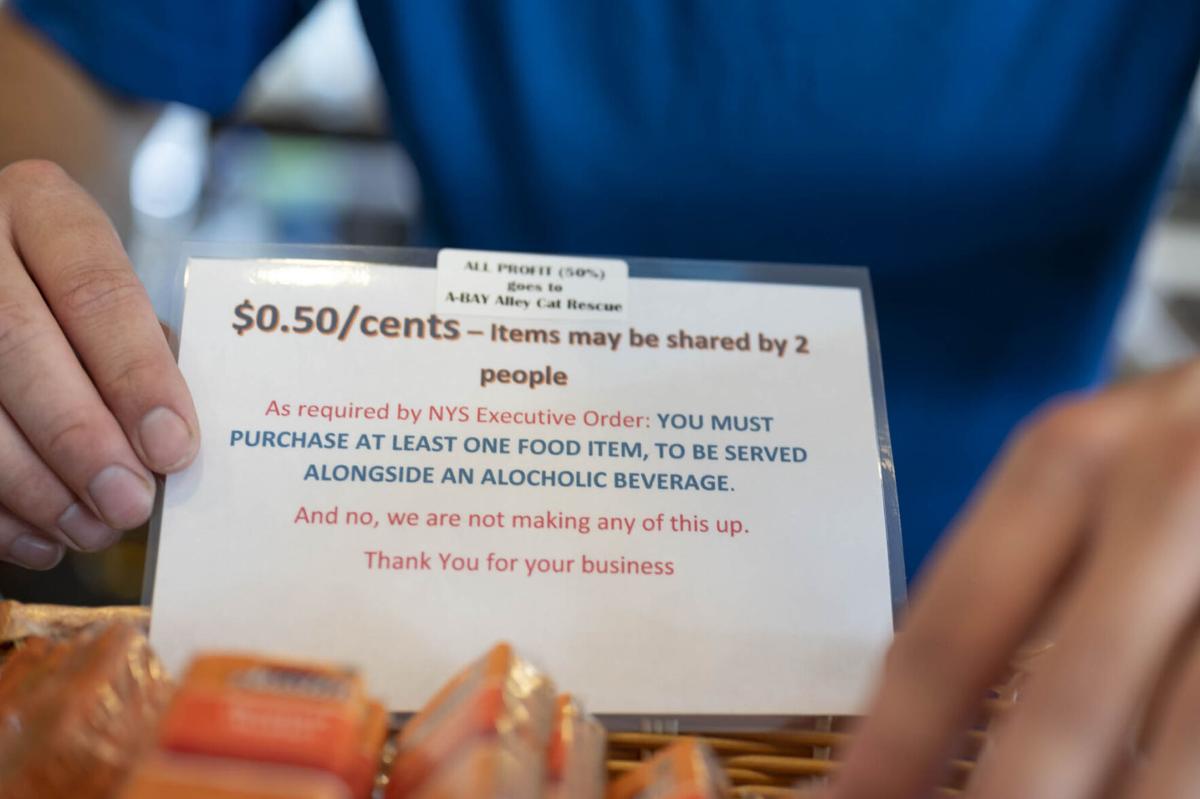 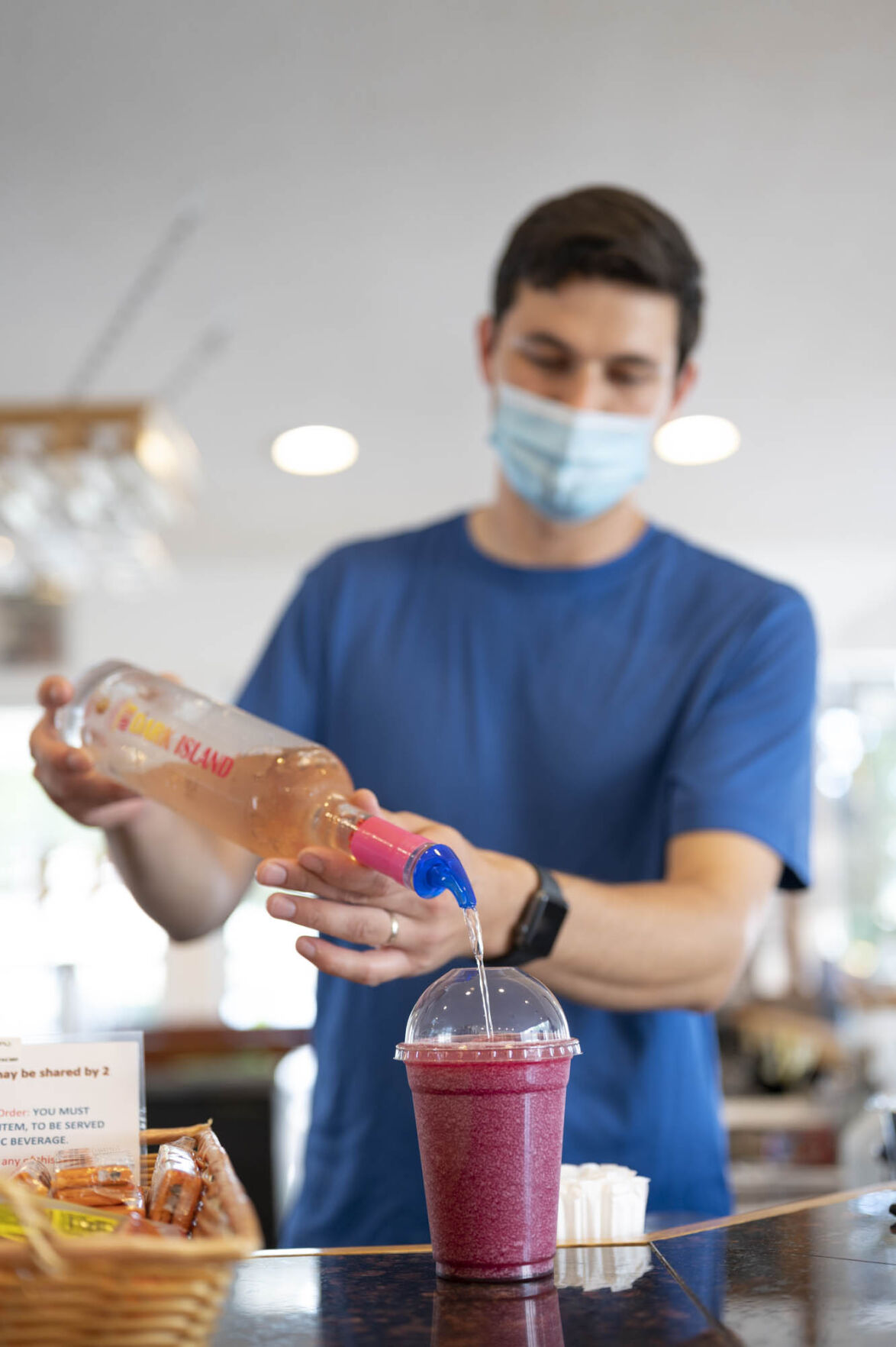 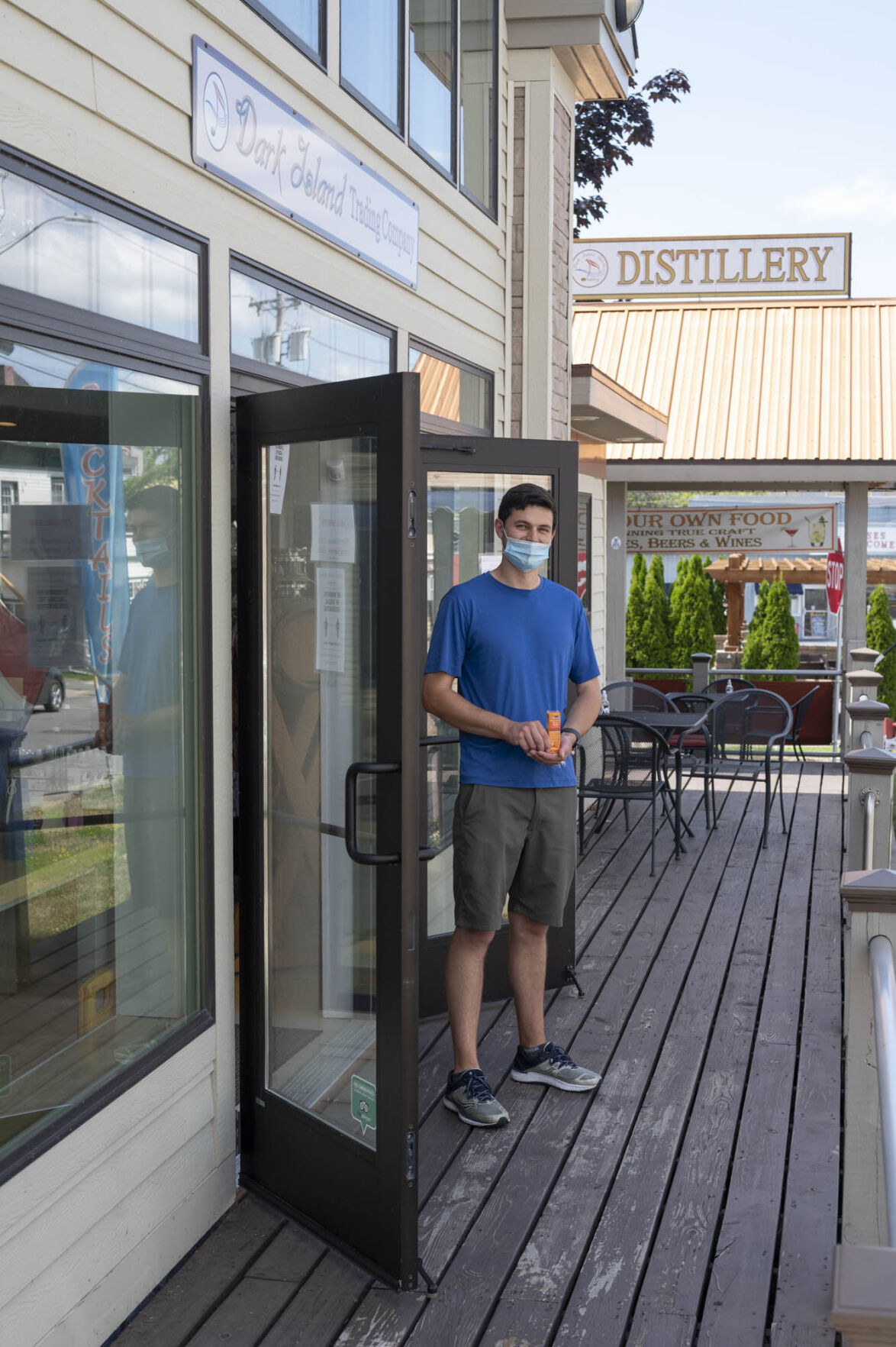 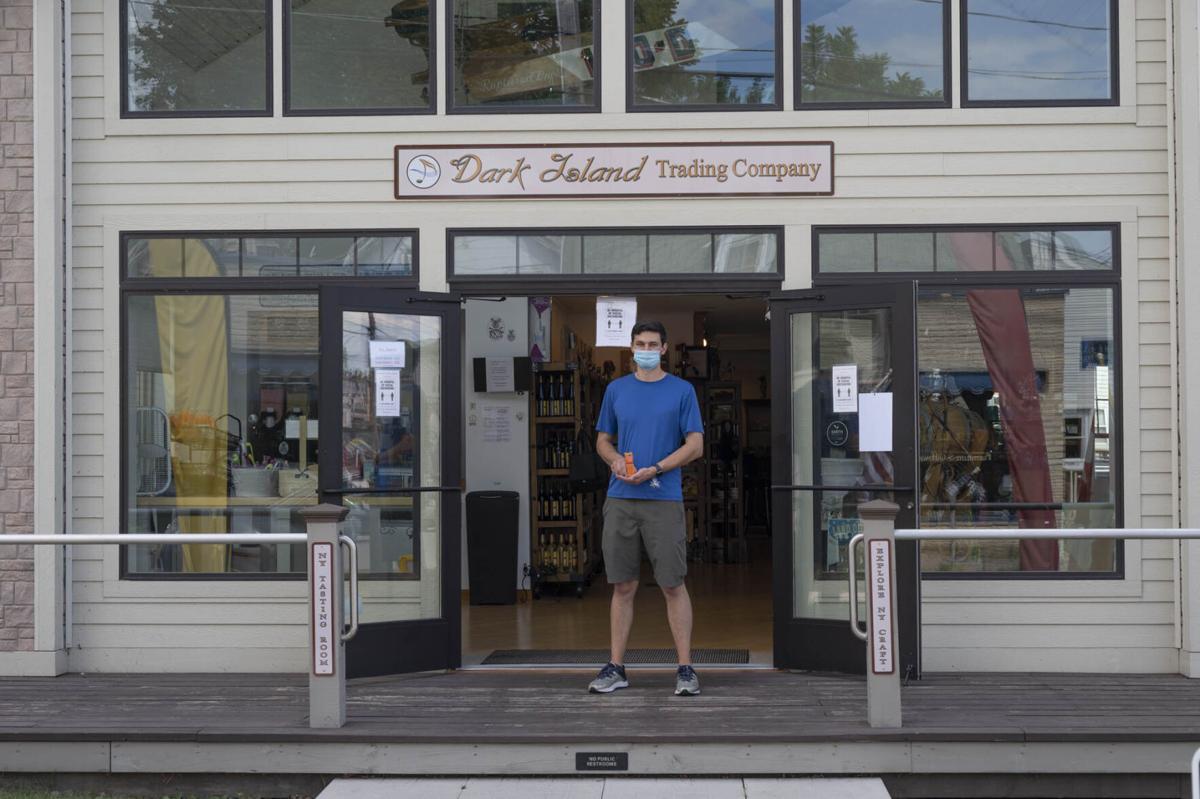 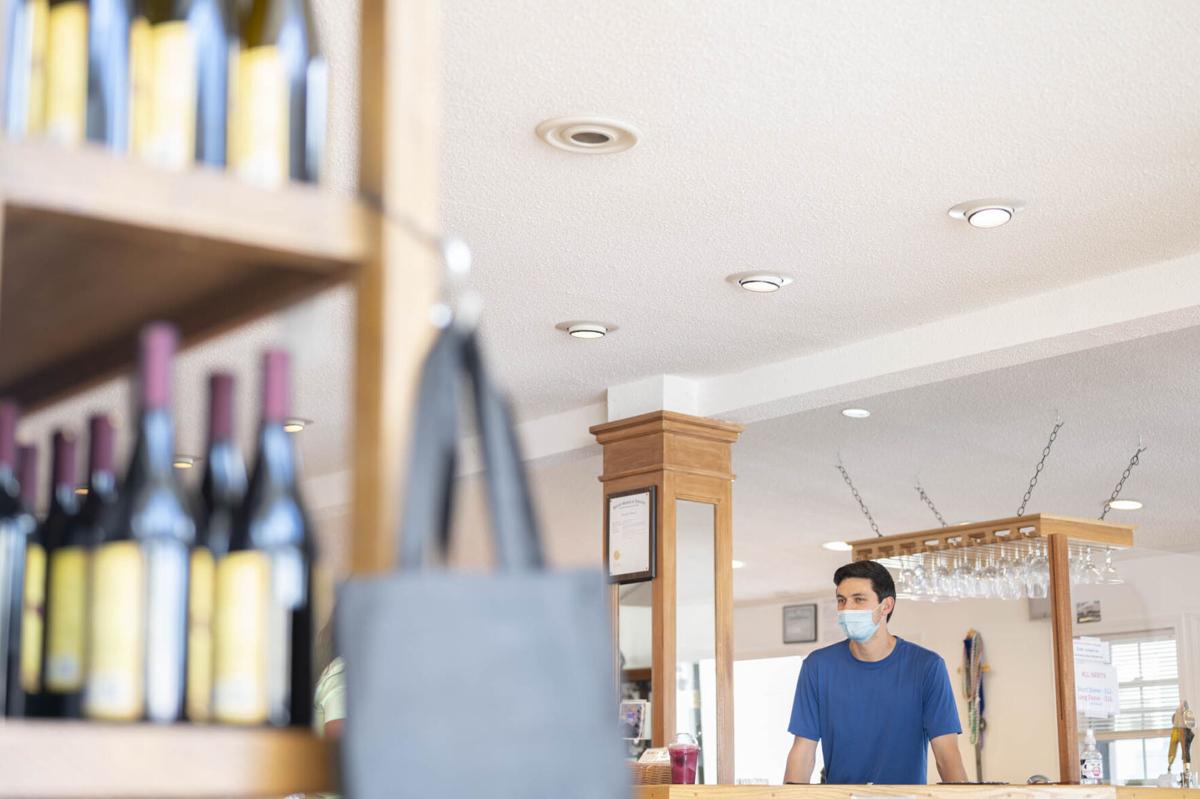 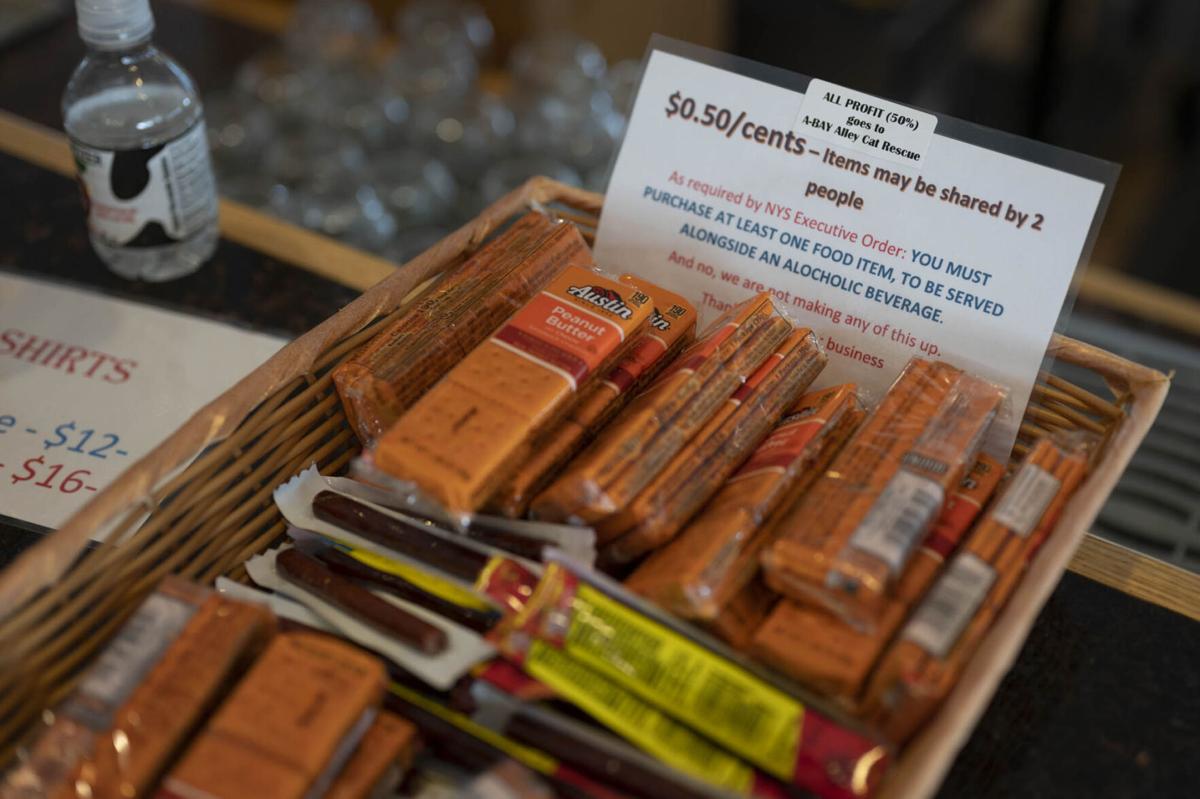 ALEXANDRIA BAY — They might have to sell it, but they don’t have to keep the cash.

The Dark Island Spirits distillery is donating all profits it makes on food sales to an animal shelter, coming after the state mandated that establishments can’t serve alcohol unless it is accompanied by the purchase of food.

In late May, the distillery began serving alcoholic slushies — among other beverages — to customers before sending them down to one of the multiple public drinking areas in the village, which were established after the board relaxed the open-container law. Shortly afterward, Roger Reifensnyder, co-owner of the distillery, finished an addition on the deck that wraps around the trading company. Customers now tend to stay on the deck, but they are still allowed to walk their beverages down to the drinking areas. Watertown has done something similar, scattering picnic around the city for customers to walk their food and alcoholic drinks to have as long as they are seated.

And it appears, for now, they still can — even after Gov. Andrew M. Cuomo issued an executive order last week saying that restaurants and bars wouldn’t be allowed to serve alcohol to customers unless they also purchase certain foods. Steve Jarvis, mayor of Alexandria Bay, said on Thursday that the board could have to address the open container law at the next meeting.

“We did that so we could help the business people,” he said, “but we might have to revisit that.”

For many restaurants, the executive order meant that if they wanted to serve alcohol, they now would have to serve food that’s consumed with a utensil — because that’s the type of food many licenses require they have.

It’s a little different in the craft industry. Most licenses for wineries, distilleries and breweries are allowed to sell food that is not eaten with a utensil.

“A person can walk into my establishment, purchase and consume an alcoholic beverage with a completely different food requirement than is required at the bar across the street from me,” Mr. Reifensnyder said.

As a result, the distillery has to sell something like cheese or crackers if they want to sell alcohol, compared to restaurants selling salads or soups. If a craft beverage tasting room decides to also sell non N.Y. State alcoholic beverages, they must then obtain a separate license to do so, but they are then constrained by those more stringent food requirements, he said.

No matter his or anybody’s opinion on the executive order, Mr. Reifensnyder is choosing to simply follow it.

“We operate under the licenses as allowed by law and we’re struggling through it,” he said. “I think I speak for many people in our industry when I say we choose not to speak about it because we’re afraid to talk about it.”

After the initial wash of customers wondering why they have to get food with their drink — they’re getting used to it now — Mr. Reifensnyder got an idea. He continued getting customers used to the idea of the food attachment and decided to make the requirement more palatable for them. He is vowing to donate all of the food profits to the Alley Cat Rescue of Alexandria Bay.

“They are now required to buy something that they might not have wanted,” he said. “At least we can take the profit motive out of it.”

And it’s been ammunition for fun with the customers.

“If we get any push-back, we try to joke and make light of it to the customers and say ‘well if you don’t want the cats to have anything then go ahead, don’t buy it,’” he said with a laugh. “We kind of screw with people.”

He said in three days they have over $200 for the rescue already.

“It’s one of those weird things where it does have a happy ending because it did bring about some cash to something we believe in,” he said. “It’s kind of one of those situations where you make lemonade out of lemons.”

Nice article ..something good coming out of Covid...