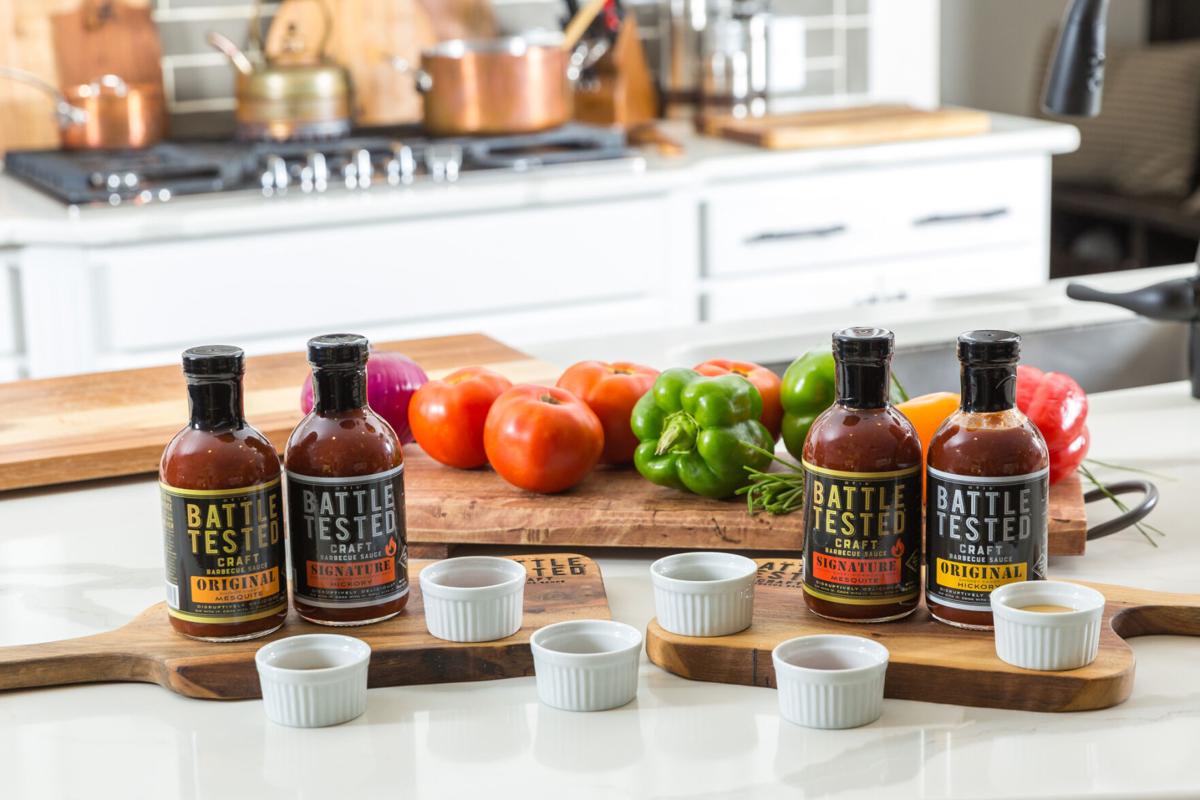 Battle Tested Craft Barbecue Sauce, which has roots in a Watertown kitchen, was brought to market by Mike Otis in 2019. Stacey Sprenz 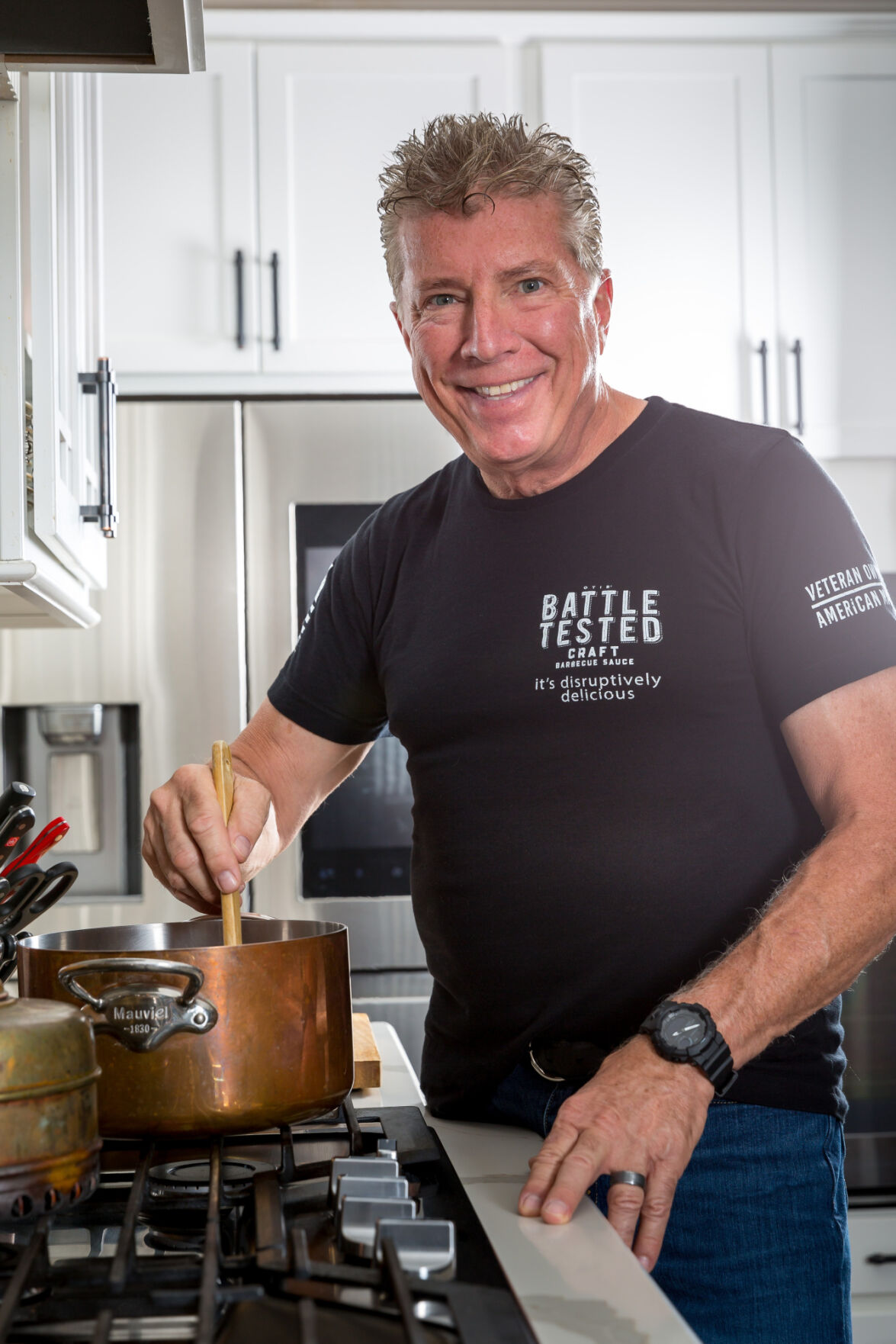 Mike Otis has been making the sauce that originated from his grandmother, Katherine O’Brien Otis of Watertown, for about 40 years. Stacey Sprenz 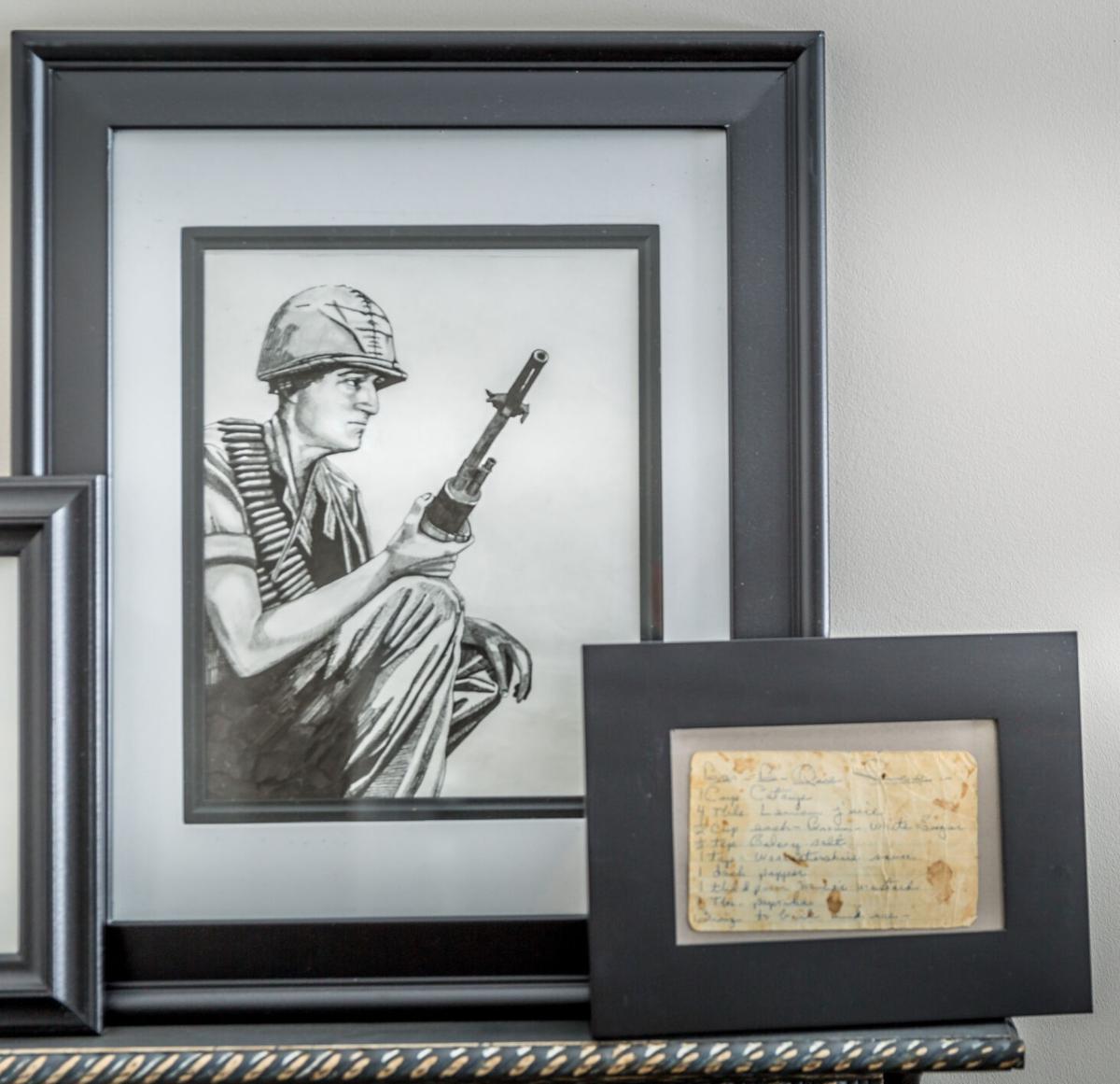 When Mike Otis turned 21, an age when he could “handle the sauce,” he was gifted the base recipe for it written on an index card. The gift was from his dad, Watertown native and World War II veteran, Edward F. Otis. Edward got the recipe from his mom, Watertown native Katherine O’Brien Otis, 1886-1965. Stacey Sprenz 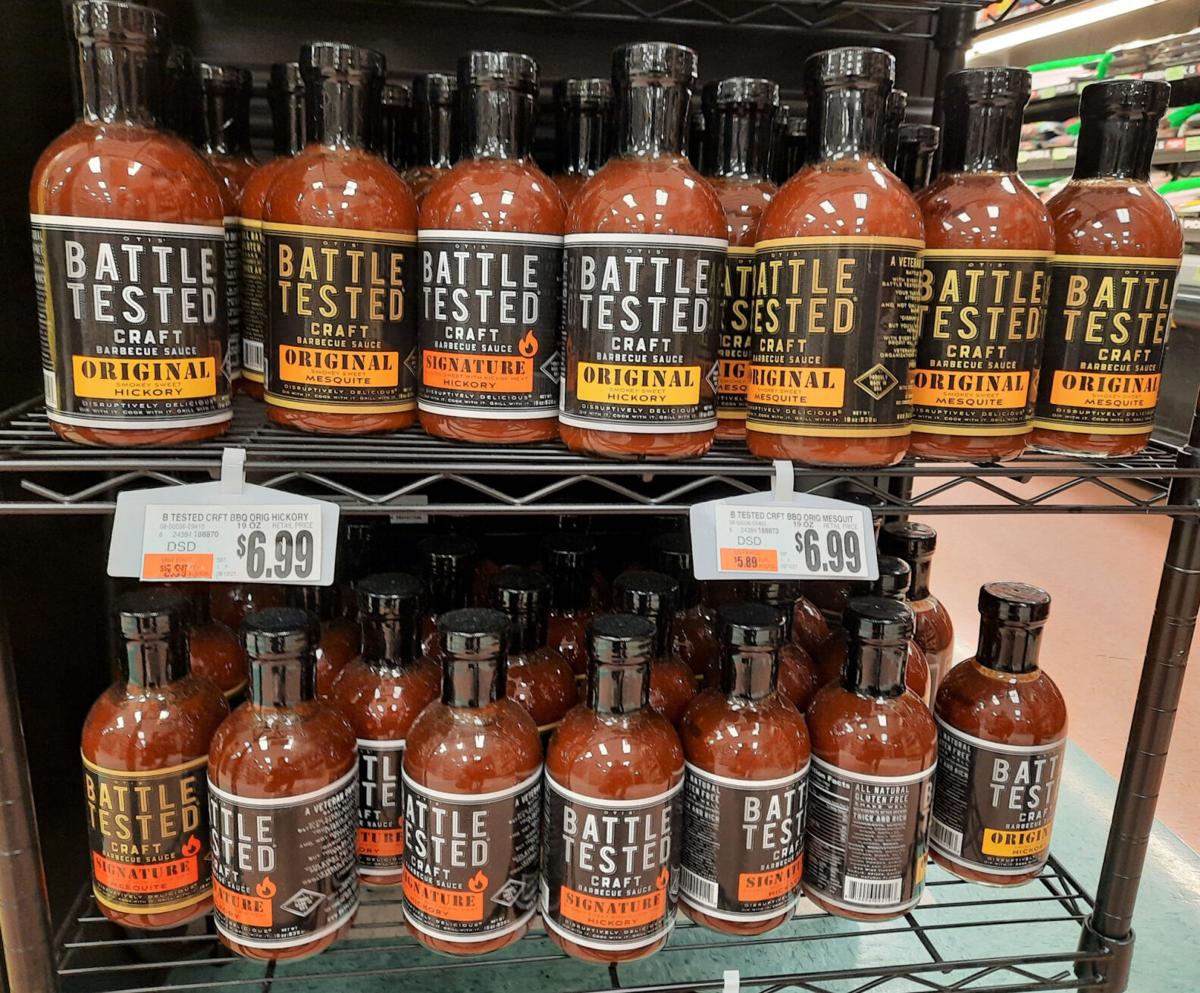 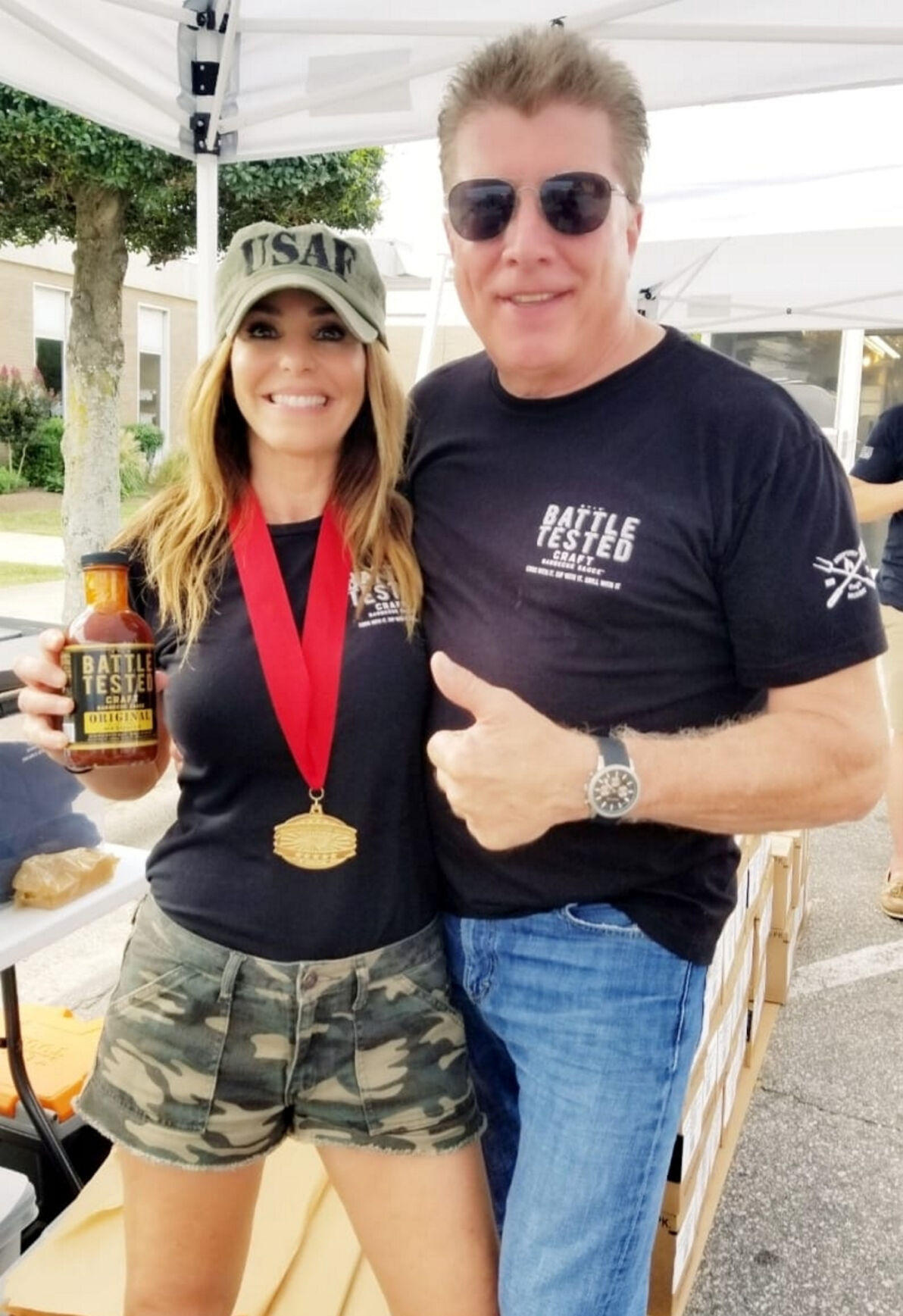 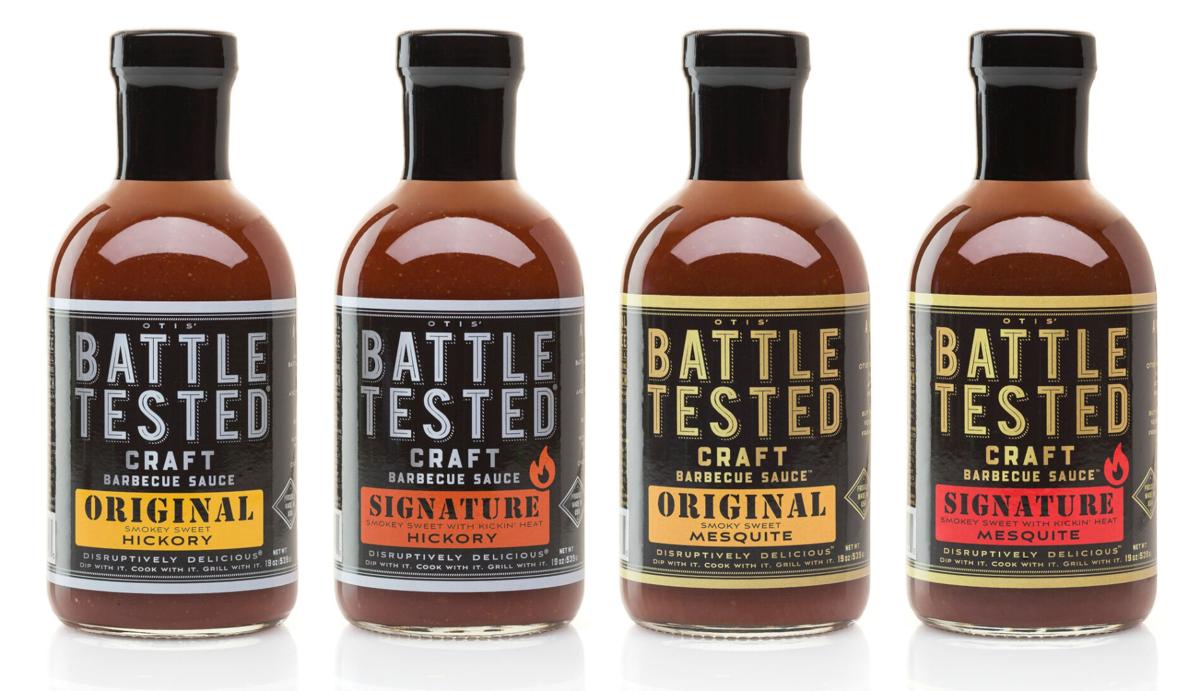 Battle Tested Craft Barbecue Sauce, which has roots in a Watertown kitchen, was brought to market by Mike Otis in 2019. Stacey Sprenz

Mike Otis has been making the sauce that originated from his grandmother, Katherine O’Brien Otis of Watertown, for about 40 years. Stacey Sprenz

When Mike Otis turned 21, an age when he could “handle the sauce,” he was gifted the base recipe for it written on an index card. The gift was from his dad, Watertown native and World War II veteran, Edward F. Otis. Edward got the recipe from his mom, Watertown native Katherine O’Brien Otis, 1886-1965. Stacey Sprenz

WATERTOWN — The family barbecue sauce recipe was guarded by city native Edward F. Otis, who got it from his mom, lifelong Watertown resident Katherine O’Brien Otis.

A woman with Irish roots, Mrs. Otis, who would raise Edward and three other children at their home at 1360 Washington St., was a member of St. Patrick’s Church and enjoyed playing piano at square dances in the county. But she apparently also knew the keys to selecting the right ingredients that would make a barbecue sauce sparkle.

“The sauce” became legendary in the family, even after the death of Mrs. Otis at the age of 79 in 1965. By that time, son Edward, the youngest of the four children, had moved to Liverpool, where he was raising his family following his service in World War II with the 44th Infantry Division, where he saw combat in France and Germany.

Edward Otis often cooked up batches of the sauce. But he kept the lid on its recipe.

He joined the Air Force at age 18, and right on schedule, inside his birthday card from his dad when he turned 21 was an index card with the base recipe for the barbecue sauce.

“I’ve been making it ever since,” Mr. Otis said.

That was more than 35 years ago. In the meantime, Mr. Otis served 22 years in the military, mainly with the 174th Fighter Wing out of Syracuse. He worked in media relations, and among his duties was lead media escort during Operation Desert Storm where he received the Air Force Commendation Medal and other awards for service. He’s also a former news photographer and morning weatherman at the ABC Syracuse affiliate.

In the past few years, Mr. Otis he has been making more and more batches of the recipe as its fans discover the allure of what is now called Battle Tested Craft Barbecue Sauce.

“Once I got the recipe, I started playing with it,” Mr. Otis said. “It was probably a straight-forward barbecue sauce. I started adding spices and other ingredients to it over the years once I got the original recipe.”

His friends encouraged him to bring his barbecue sauce to market.

“I didn’t know anything about the food industry, so I made it for friends, putting it in a Mason jar, or I’d bring it to a cookout or whatever,” Mr. Otis said.

In 2017, he shared the sauce with friend and entrepreneur Christopher Guerrera. Mr. Guerrera and business partner Judy Abrahams were featured on ABC’s “Shark Tank” in its final episode this year. Their product, Super Potty Trainer, is designed to make toilet training less of a challenge.

“He sent me a check and I sent him a thank you note with a thing of sauce, and he shared it with a guy who writes for Forbes magazine who happened to be at his house that day,” Mr. Otis said.

Mr. Guerrera’s guest, Mr. Otis said, was impressed by the sauce and told him that it should be brought to market. Mr. Guerrera agreed and relayed the suggestion to Mr. Otis.

But his wife, Deardria Otis, wondered how he would do that.

“I said, ‘I have no idea,” Mr. Otis said. “‘But we’re probably going to empty bank accounts or run up credit cards and lines of credit because I’ve got to figure it out.’”

Mr. Otis said that as a military veteran, he took advantage of state and federal organizations that work with veteran entrepreneurs.

“I started there,” he said. “And they asked me what I wanted to do.”

When Mr. Otis shared his plan of starting a barbecue sauce company and to be a national brand in five years, it was met with a lack of enthusiasm.

“They told me to save my money because I would never be able to do it,” Mr. Otis said. “It’s too competitive.”

Others told him the same thing.

“Almost everybody I spoke to told me, ‘Don’t do it because you won’t make it.’ So of course, I did it.”

Those stores include Tops Friendly Markets, Food Lion and Wegmans.

The Tops Friendly Market location in Watertown at Watertown Shopping Plaza off Washington Street is near where the sauce originated at Mr. Otis’s grandmother’s house.

“We’re more than thrilled that Tops Markets has picked up Battle Tested in Watertown,” Mr. Otis said. “To see it come home to Watertown where the original recipe came out of my grandmother’s kitchen and where my dad grew up, who passed it on to me is heartwarming.”

The makers of Battle Tested Craft Barbecue sauce was asked to be a sponsor of this year’s Mountainfest at Fort Drum, held in August.

“As a veteran-owned company with ties to Watertown and Central New York, it was a no brainer for us,” Mr. Otis said. “They had a VIP tent and we gave the caterer of the event sauce to make pulled pork for everybody. I brought a bunch of bottles to give away and told everybody if they like it they could find it over at Tops Friendly Market in Watertown. The response was really, really good.”

Mr. Otis is passionate about issues relating to veterans, specifically bringing awareness to PTSD and veteran suicide. He said that in Central and Northern New York, Battle Tested Craft Barbecue Sauce donates 5% of its profit from every bottle sold to Clear Path for Veterans in Chittenango, Madison County. The nonprofit works closely with veterans and service members at Fort Drum.

Mr. Otis and his wife moved to Raleigh, N.C., about seven years ago, where the sauce is featured in several chains.

When interviewed for this story, Mr. Otis was talking from his vehicle on his way to Chesapeake, Va.

“We have a food broker who does military commissaries,” he said. “We’re dropping product off to them and they’re in the process of getting it into military bases. Fort Drum is going to be the first place we’re going to look at, just because they’re aware of the product. We hope to be on the shelf there in the next month or two.”

With the growing success of the sauce, Mr. Otis was asked what his father, who died in 2000 at the age of 74, would think of what he’s accomplished with the family recipe.

“She’s pretty happy about it,” Mr. Otis said. “She tells me my dad would be proud. That’s nice to hear.”

Good article and congratulations but the Texas brand of barbecue doesn’t use sauce.