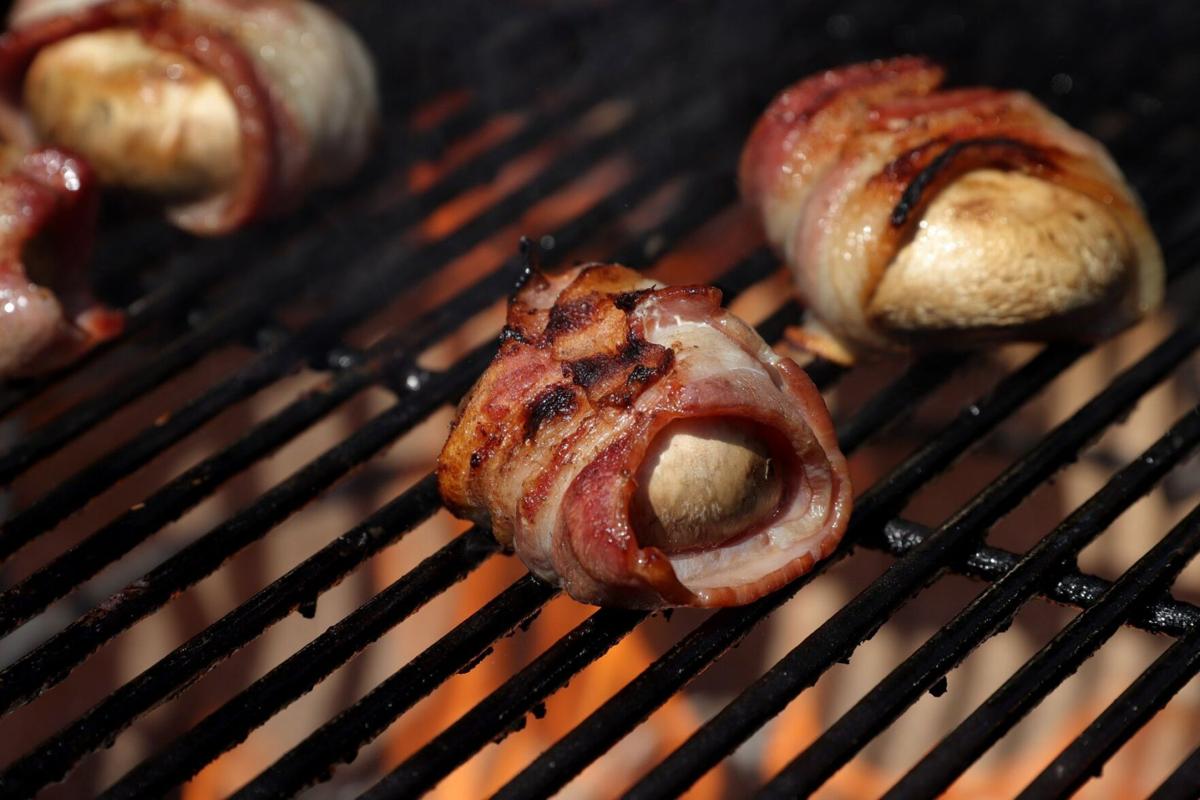 Savory S’mores, mushrooms with bacon and blue cheese, made on the grill. Hillary Levin/St. Louis Post-Dispatch/TNS 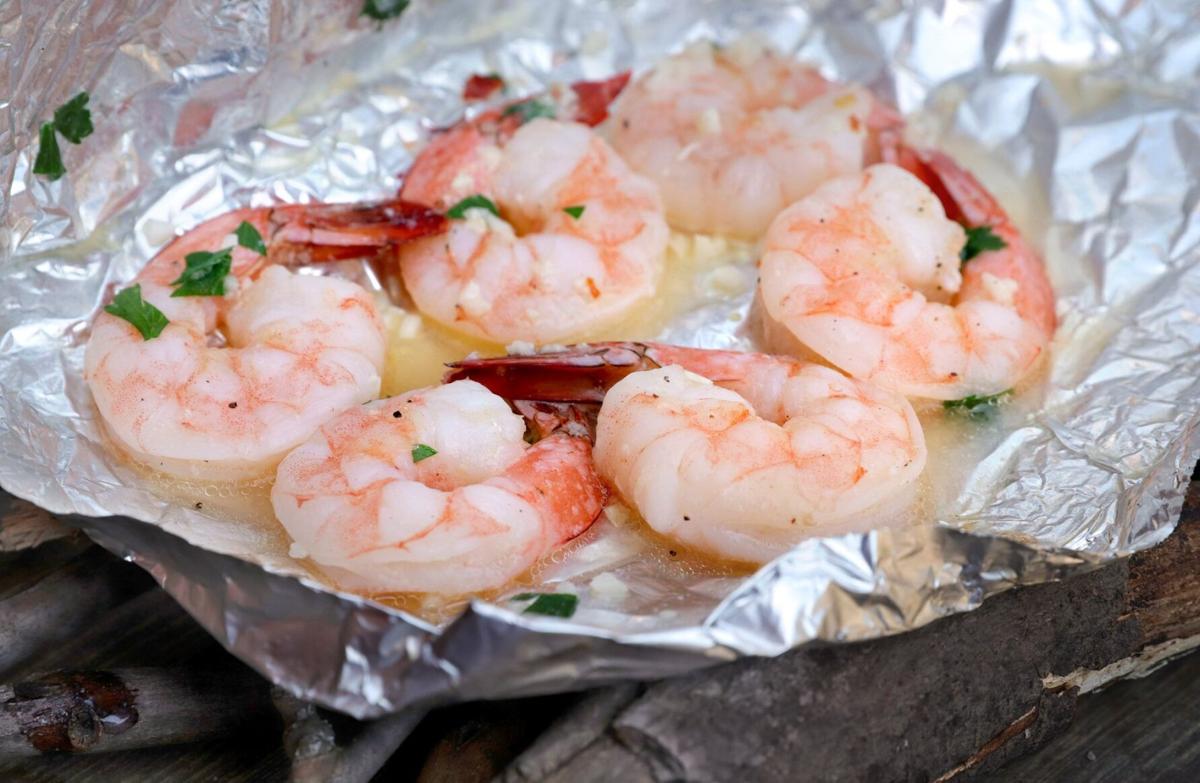 Shrimp Scampi, made on the grill. Hillary Levin/St. Louis Post-Dispatch/TNS 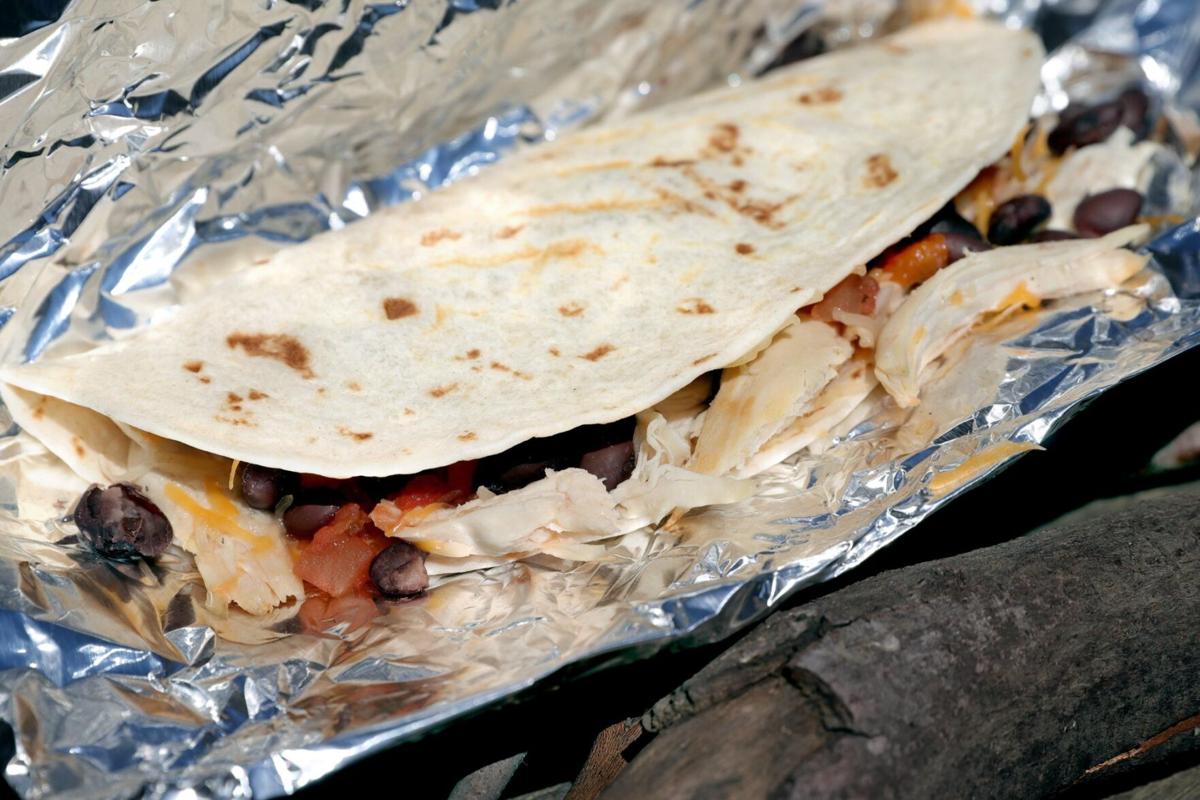 Quesadilla with chicken, made on the grill. Hillary Levin/St. Louis Post-Dispatch/TNS 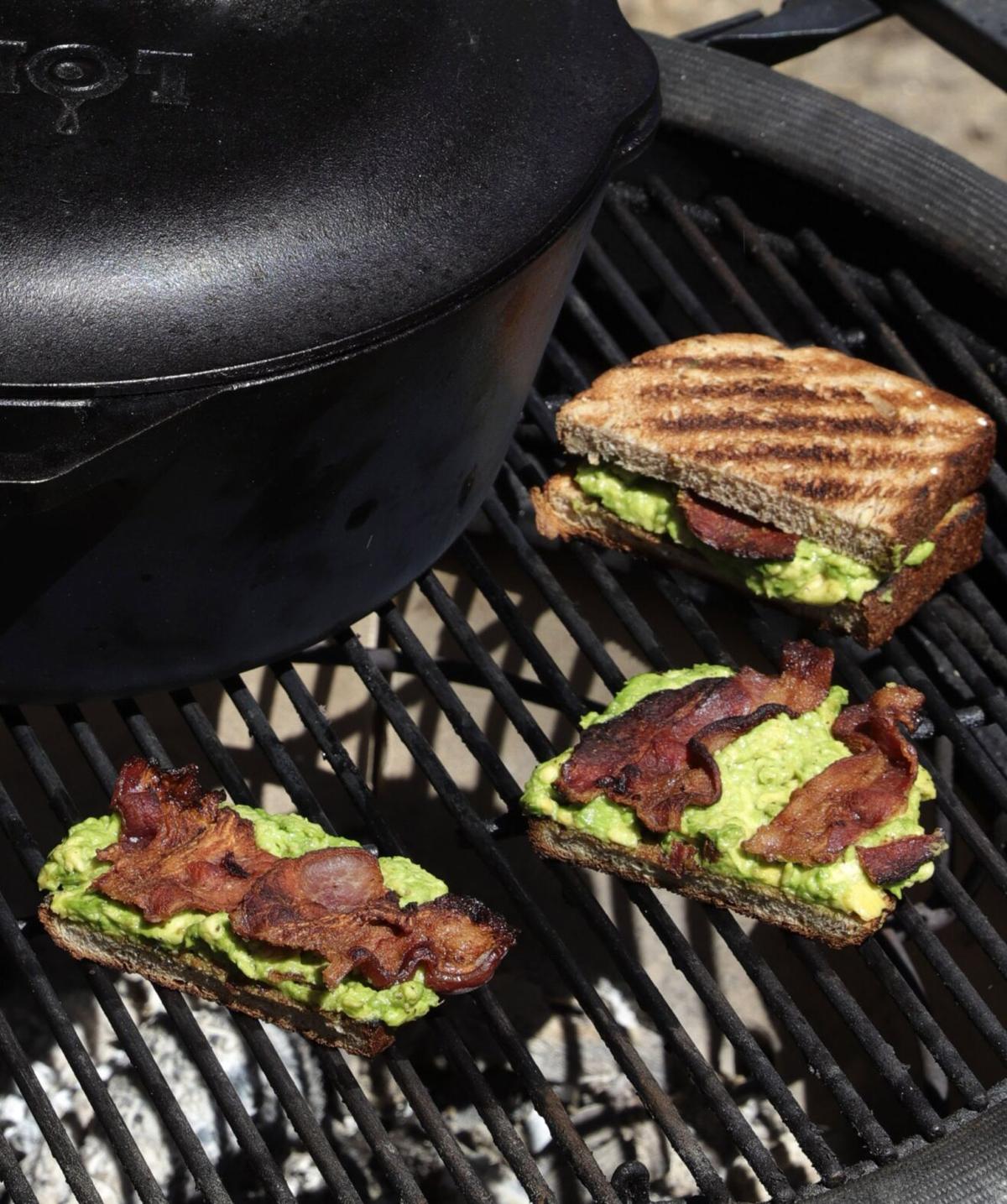 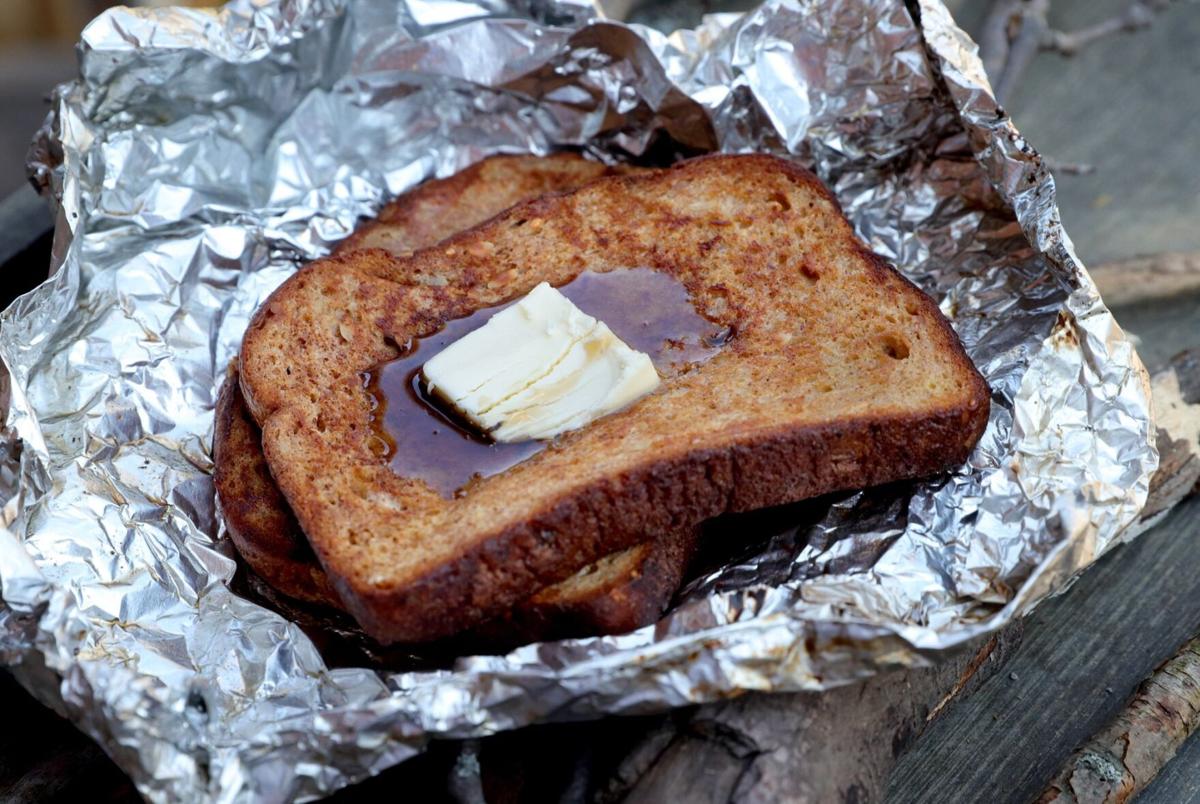 The last time my Boy Scout troop went on a campout, we ate steak.

I was startled. I was shocked. I didn’t know you could do that on a campout. Before that, most of our previous experiences around a campfire somehow involved Spam. We also had a memorable night in which we ate hamburgers with the ground beef stretched by adding bread, which our troop leader informed us was to add flavor.

Our troop leader’s name, incidentally, was Norman Bates. Despite sharing a name with the notorious psycho in “Psycho,” he was a nice guy. He was so nice, he bought steak for our last campout.

So perhaps my concept of eating around a campfire has been skewed. I always thought it meant Spam, with occasional sightings of hamburger and, on the rarest of occasions, steak.

But apparently things have changed in 50 years. Now, some people drive to a campsite in campers equipped with all the comforts of a four-star hotel. Others’ tastes have expanded beyond the bounds of hot dogs, hamburgers and Spam to encompass dishes with more creativity in their cooking.

I recently camped out in the wilds of St. Louis’ Tower Grove East neighborhood, where I encountered exotic wildlife (squirrels) and experienced the mysterious sounds of nature (the friendly barking of the dogs next door, Florence and Moby).

I also cooked up a mess of chow around the old campfire, which I guess would technically be called a “grill.” But still, the recipes will work for campfires, too.

I began, as one does, with breakfast. I made Campfire French Toast, which just may be the best French toast ever. And that’s not just because you get the faintest hint of smoke in your toast (OK, you can’t really taste it at all, because it’s wrapped in foil), but it’s also because the recipe is so stunning. And rich.

Usually, you use whole milk to make French toast, but it can be a hassle to bring milk with you on a camping trip. It’s so much easier just to use a can of evaporated milk, which, I see now, has more calories — even nonfat evaporated milk.

But you could use regular milk and still be impressed by this superlative dish, because it also calls for a fair amount of cinnamon and vanilla, plus a bit of maple syrup right in the dipping mixture. These are the magic ingredients that make any French toast better, especially when paired with multigrain bread.

I used the same loaf of bread to make Bacon and Avocado Toast. And that was excellent, too, because of certain irrefutable fact: Bacon tastes better when it’s cooked over a fire.

Though it is smoked to begin with, bacon only improves from a little extra fresh smoke from the glowing embers of a campfire. Toast, too, tastes better when cooked directly on the grate over a fire. Don’t cook the avocado.

And if you do happen to remember the egg, simply cook it in the pan you used for the bacon. But frankly, the sandwich I made was so good it did not need an egg.

The next dish I made is so obvious I’m embarrassed that I never thought of it before — quesadillas cooked over a fire.

Like the French toast, the secret is to cover it in foil. Once protected from the fiercest heat of the fire, the quesadilla has a chance to warm up slowly until the cheese reaches the ideal state that scientists refer to as “gooey.”

You can put anything in a quesadilla, but I stuck to the basics: precooked chicken, black beans, salsa and shredded cheese. When you’re cooking over a campfire, you don’t want to get too fancy.

Unless you’re making shrimp scampi. If you happen to have the ingredients for shrimp scampi at your next campout, you may as well make it. It’s actually a simple, unassuming dish, but it is as delicious to eat at a campfire as it is unexpected.

Once again, the key is to use foil. Just divide the ingredients — shrimp, garlic, white wine or chicken stock, butter, red pepper flakes, lemon juice and a bit of salt — into foil pouches, seal the pouches tight and put them on the grate.

Foil, of course, is notoriously nontransparent. And because shrimp are so quick to cook, you’ll have to open the pouches a few times to see if they are done. But the effort is worth it.

Naturally, any time spent around a campfire must include s’mores, but I decided to mix things up and make savory s’mores. That is, I stuffed mushroom caps with blue cheese and wrapped then with bacon.

Perhaps you have had dates stuffed with Parmesan and wrapped with bacon. These savory s’mores are a variation on that life-changing idea, and you get the extra benefit of the smoke-enhanced bacon.

1. Place each tortilla on a large piece of heavy-duty aluminum foil and place chicken on half of each tortilla. Top with equal amounts of beans, salsa and cheese. Fold tortilla over and fold foil over tortilla, but do not seal the edges.

2. Place foil packets on the grate over a fire and cook, flipping occasionally, until cheese has melted and tortilla is moderately browned and crisp.

1. Clean mushrooms and remove the stems. Fill caps with blue cheese and wrap with bacon so the bacon covers the cheese. Secure with a wooden toothpick.

2. Place wrapped mushrooms on a grate over a fire. Cook, occasionally turning carefully with long tongs, until bacon is done. When turning, try to keep melted cheese from dripping out (but don’t worry; it will still taste good).

1. Spray 8 (14-inch) pieces of heavy-duty foil with nonstick spray, or use nonstick foil, and brush the center of each piece with melted butter.

2. Whisk together the evaporated milk, eggs, maple syrup, vanilla and cinnamon in a small baking dish or large resealable bag. If you don’t have a whisk, use a fork.

3. Dip both sides of each piece of bread in the milk mixture until fully submerged. Arrange 2 pieces of bread next to each other, without overlapping, on 1 piece of buttered foil. Repeat with the remaining bread and 3 pieces of foil.

4. Make the foil packs: Put the remaining 4 pieces of foil, buttered-side down, directly on top of the bread so the foil touches the bread and the edges line up. Fold and crimp the edges tightly to make 4 rectangular packets.

5. Place the packs on a grate over a medium-hot fire and cook about 5 minutes on each side. Cooking time will depend on the heat of the fire and the distance of the packs above the embers, so check for doneness by carefully opening one of the packs (hot steam will escape). The French toast is done when it is browned on both sides and the center is custardy. Keep in the packets or transfer to plates. Top each serving with 1/4 cup of the berries, if using, and more maple syrup.

1. On a grate over a campfire or grill, toast bread on both sides.

2. Place a cast-iron skillet over the fire and cook bacon; watch carefully to keep from burning. Cut avocado in half, remove the pit and scoop out the middle; mash it with a fork in a small bowl. Spread the avocado on one piece of toast, sprinkle with the juice of the lemon and season well with salt and pepper. Top with the bacon and the other piece of toast.

2. Divide shrimp onto 4 large pieces of heavy-duty aluminum foil, and sprinkle evenly with garlic-wine mixture. Top each portion with 1 piece of butter, and sprinkle with parsley. Fold foil over each shrimp mixture and fold edges to seal tightly.

3. Place foil packets on a grate over a fire and cook, flipping occasionally, until done. Cooking time will vary depending on the size of the shrimp and heat of the fire, but remember that shrimp cook quickly. Periodically open a packet to check doneness; shrimp are cooked when they are pink and curled.