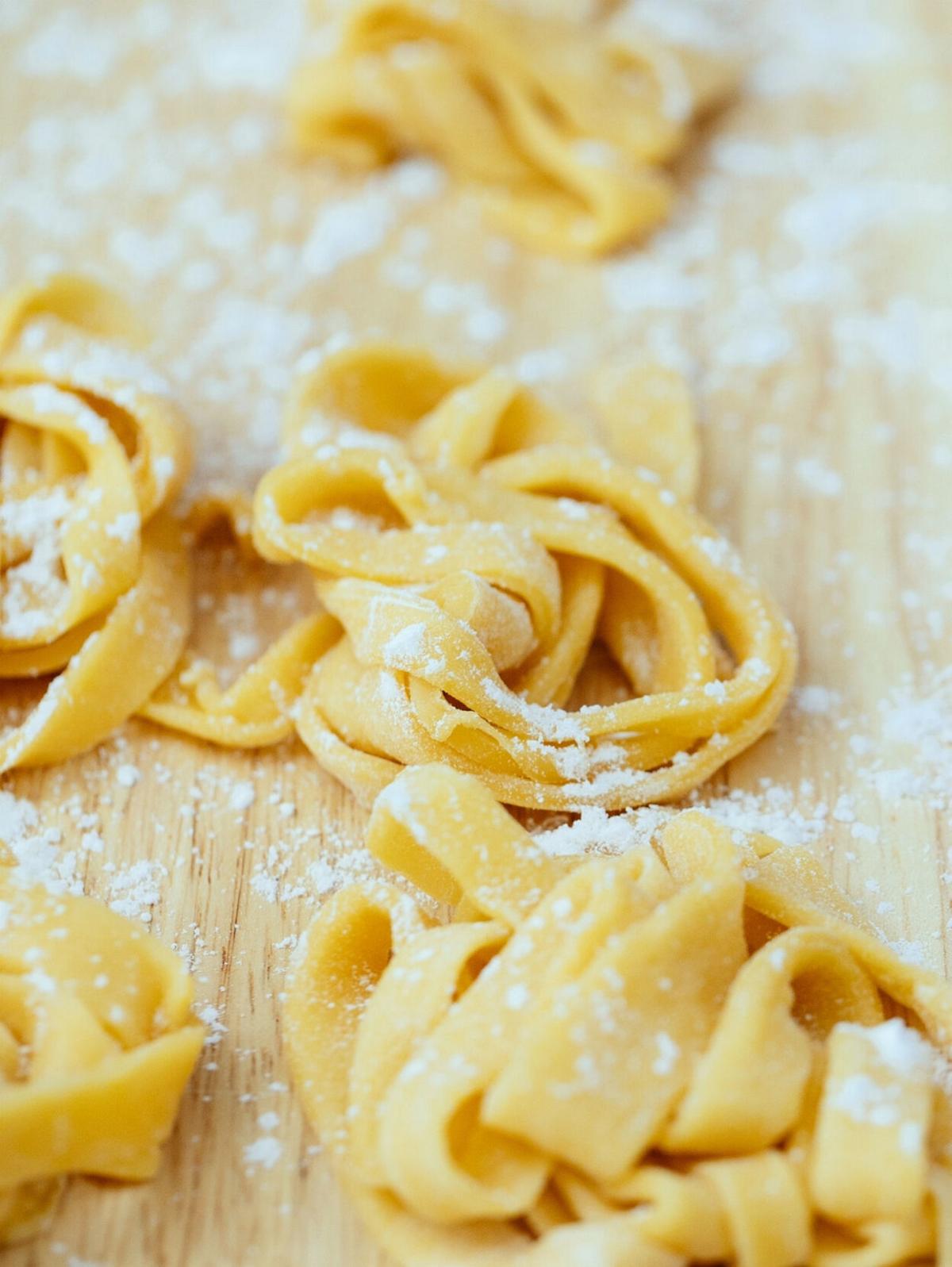 With fat and flavor from oil and eggs, homemade noodles’ taste and texture is night and day from wheat and water boxed pasta. Pexels 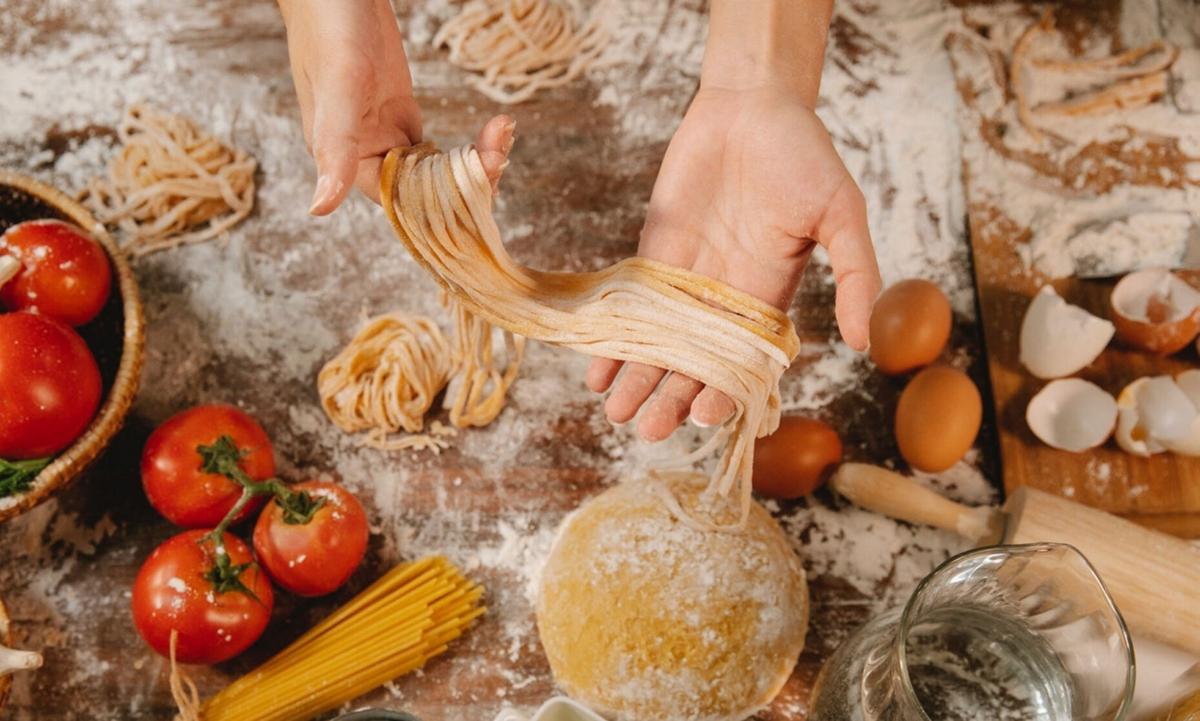 Making your own pasta isn’t brain surgery. All you need is flour, eggs and a bit of salt and oil. Pexels 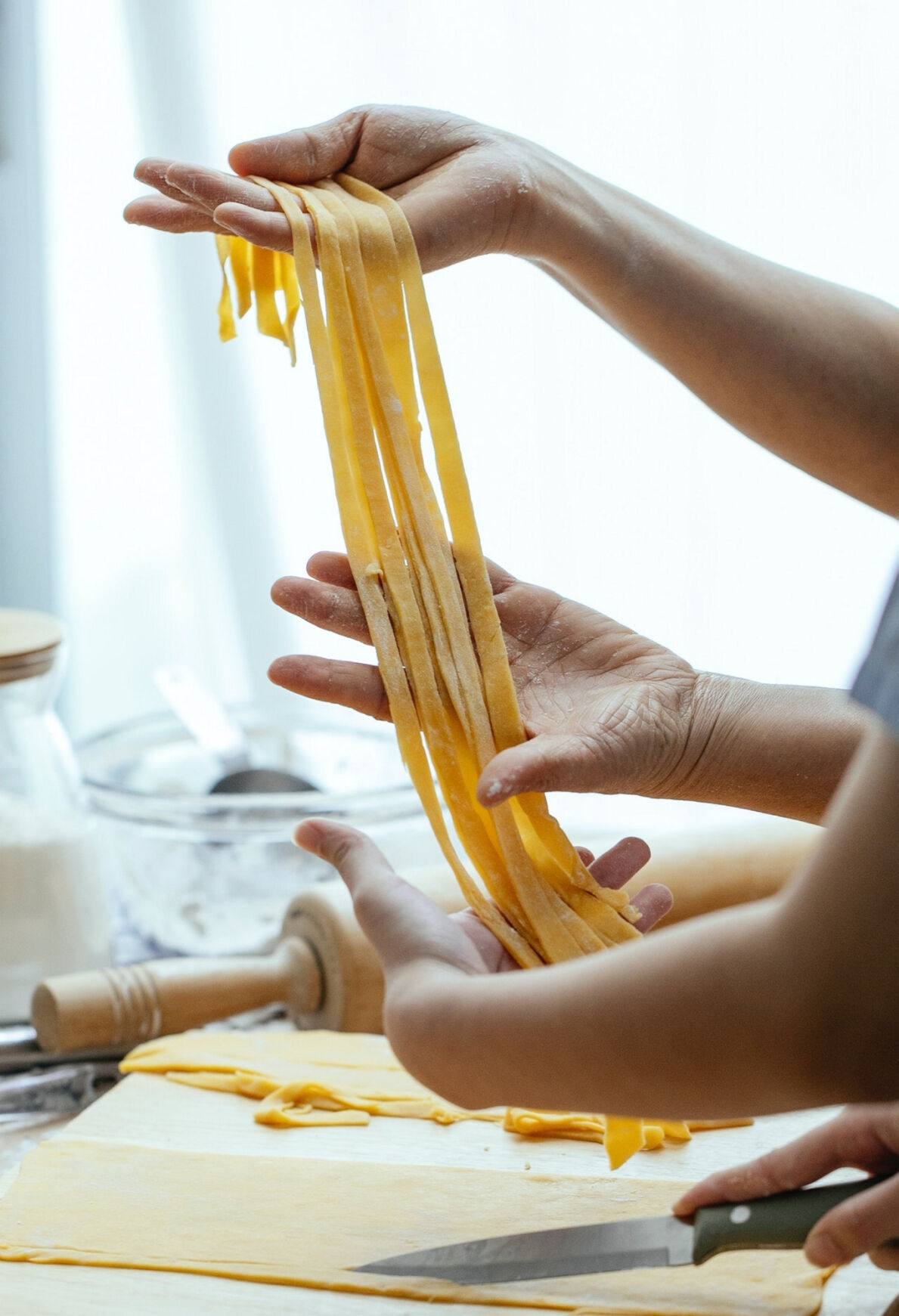 Since the pandemic isn’t going anywhere soon, why not spend some time learning how to make homemade pasta? Pexels

With fat and flavor from oil and eggs, homemade noodles’ taste and texture is night and day from wheat and water boxed pasta. Pexels

Making your own pasta isn’t brain surgery. All you need is flour, eggs and a bit of salt and oil. Pexels

Since the pandemic isn’t going anywhere soon, why not spend some time learning how to make homemade pasta? Pexels

Have you been baking more during the pandemic than before?

Welp, it’s nigh on a full year since the world as we knew it threw in the towel, leaving us masked and quarantined on Planet Freakazoid. Now, I don’t know about you, but I’ve been spending my time wisely. I shampooed the cat. I can now wink with either eye. And, I’ve learned to speak Esperanto. Like a native (ka-pow!). God, I’ve been productive.

More than anything, though, I’ve been making my own pasta. Spaghetti. Angel hair. Demon’s goiters. Goose noodles. Let’s take a gander.

Why you need to learn this

Admittedly, as a life skill, making your own pasta falls on Barnaby’s Scale of Necessitude somewhere between learning to play the French horn and building yourself an emotional support raccoon out of spare parts dug up from the potter’s field out back of the zoo.

Still, last I checked, the ol’ ’ Rona weren’t going nowhere fast, and it looks like we’ll be hunkered like a bomb shelter spokesmodel into the foreseeable future. Why not make some noodles, then? I daresay it’s a sight better use of your time than rage-tweeting Rachel Maddow. Besides, there’s something uniquely lovely about freshly made noodles. With fat and flavor from oil and eggs, its taste and texture is night and day from wheat and water boxed pasta.

The steps you take

For the flour, I’d go with all-purpose. You’ve probably already got some in your cupboard, between the flea powder and the flypaper.

Still, some “people” like to use semolina, which is made from durum, which is just another variety of wheat. Semolina’s got a yellowish cast, like cornmeal or monster eyes, and its grind is rather coarse, like cornmeal or the collected works of David Mamet. Most dried, boxed pastas are made from it, and the fresh pasta made from it is denser than that made with just AP flour.

For the liquid, eggs. Figure one large egg for every two-thirds-ish cup of flour will make enough pasta for one or two servings, depending on your degree of peckishness.

Beyond that, a tablespoon of olive oil to soften the dough and a little salt to bring out the flavor, and you’re set to jet, like we used to say. Decades ago.

As for the method, there’re two basic ways: the Old School Way and the Easy Way. The Old School way takes some time, not just to pull it off, but, to explain, too.

Briefly, you pile the flour into a mound, hollow out the center, like a dormant volcano, then add the eggs, oil and salt. Stir it with a fork, scraping the flour from the volcano walls and mixing it into the egg until it forms your dough. Then (eye-roll) you have to knead it. It does take some time, but, if you’re committed to mastering the process — by God, you go, you crazy monkey — feel free to send me a message (Twitter @jimdewan) and I’ll send you some step-by-step instructions, because that’s how I roll.

If, however, you want your pasta and you want it now, I’d say go the Easy Way (see the recipe): Dump everything into your food processor, hit the “Start” button, and before you can build a catamaran — way, way before — it’s done.

Regardless of how you make the dough, you still have to roll it out. Now, you could use a rolling pin, like you’re Lucrezia Borgia. I, however, recommend getting one of those pasta rolling machines that looks like something Tomas de Torquemada might have kept in his Torture Closet next to the Pear of Anguish. You can find plenty of models for under a hundred clams, and some for under 50. A bargain, right? Just follow the instructions that come with the machine and in no time, you’ll have glorious, silken pasta that will make people think you’ve forgiven Mario Batali.

Now, it’s conceivable your desire for fresh pasta is outweighed by your aversion to all that consarned noodle-making. Well, tons of grocers carry fresh pasta. Or, if you don’t mind a tiny bit of effort, make some ravioli using wonton wrappers. They’re the perfect size and thickness. All you need is to make a filling, which, admittedly, is harder than making toast, but easier than making up a plausible explanation for that corpse in the pantry: Mix ricotta cheese with minced fresh herbs or some cooked, finely chopped spinach or cooked ground sausage or a couple tablespoons of grated Parmesan or anything else that sounds good. Put a little in the center of a wonton wrapper, wet the edges, then place another wrapper on top and press down to seal. Done.

One last thing: Fresh pasta, like dried, boxed pasta, should be cooked in a large amount of boiling, salted water. Unlike the boxed pasta, though, which can take up to 10-ish minutes to cook, fresh pasta cooks in jiffies, sometimes under a minute.

If this is your first time using a pasta machine, you might consider getting a trusted acquaintance to help you: One person turns the crank while the other holds the dough and guides it from under the machine as it passes through the rollers. Total time, start to finish: About 75 minutes

2 cups flour, plus more as needed

2. Continue processing until dough ball forms, about 30 seconds. If needed to bring dough together, add water a tablespoon at a time.

3. Remove dough from bowl; knead into a smooth ball on a clean, dry surface, about 1 minute.

8. Stir in tomatoes, bring to a boil, then reduce heat and simmer to combine flavors. Add water or stock as needed if sauce becomes too thick. (You know how thick you like your sauce; you be the judge.)

9. Cut dough into four pieces. Leave three under plastic while you roll out fourth.

10. Flatten piece of dough by hand; pass it through a pasta machine with the rollers on the widest setting. Letter-fold the dough and pass it lengthwise again through the widest roller setting to get it into a relatively even sheet. Repeat if needed.

12. Lay the finished sheet on a flour-dusted surface and sprinkle more flour over. Cut it into relatively equal pieces, 8- to 12- inches long, depending on the original length of the sheet. (You’ve eaten pasta before and know how long noodles like spaghetti are. If yours are somewhat shorter or somewhat longer, exactly no one will complain.)

14. Put a cutting attachment on your machine; pass the sheets through to make your noodles. Spread the cut noodles onto a clean sheet pan, sprinkle with flour and toss lightly to coat to prevent noodles from sticking. Keep noodles in a thin, rather than thick, layer to prevent them from being smashed together by their own weight.

15. Bring a large pot of well-salted water to a rolling boil. Add half the noodles and cook, stirring occasionally, until cooked through, 30 to 60 seconds depending on noodle thickness.

16. Remove with tongs to a warm bowl and cook remaining noodles.

17. Serve immediately with sauce and cheese.