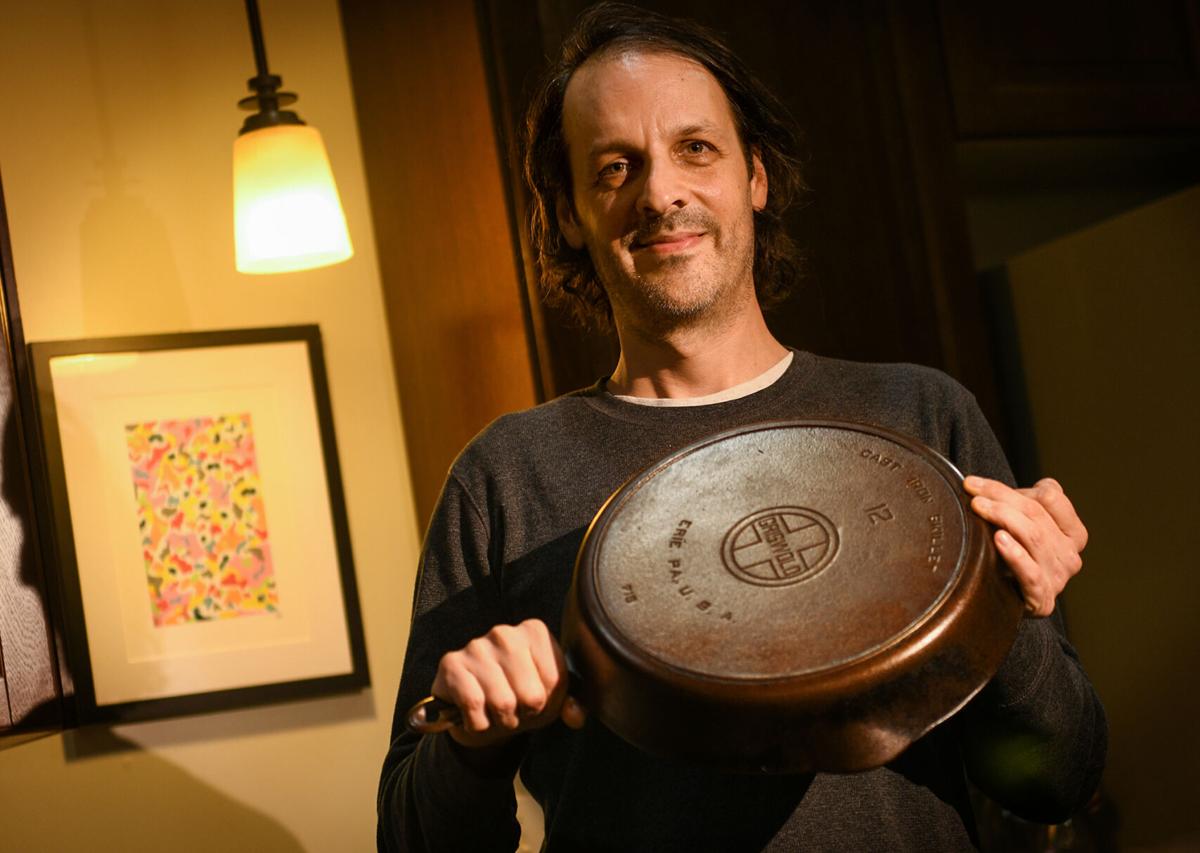 Mike Sanders, a concert promoter and club owner, with one of his restored Griswold cast iron skillets at his Lawrenceville home. Steve Mellon/Pittsburgh Post-Gazette/TNS 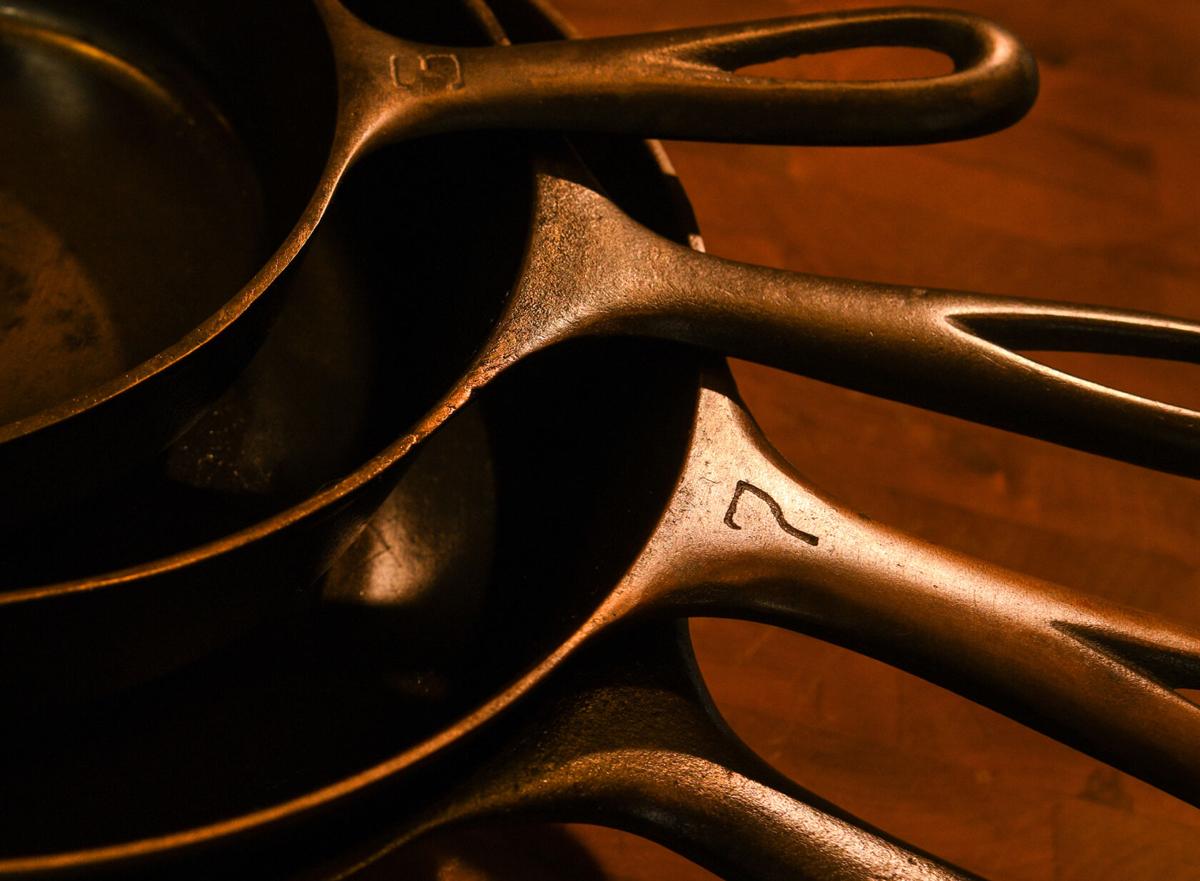 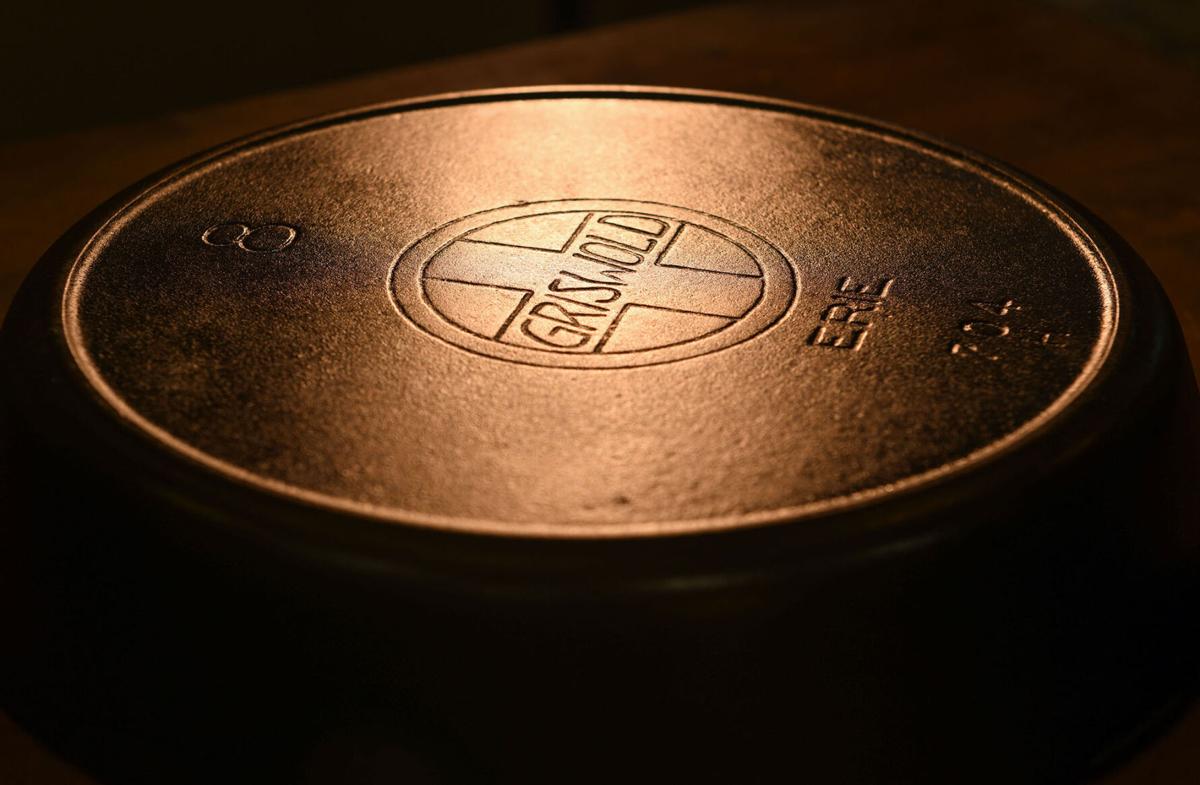 This vintage Griswold cast iron skillet dates back to the early decades of the last century. It has been restored by Mike Sanders, a concert promoter and club owner, at Sandersâ€™s Lawrenceville home. Photographed on Monday, Oct. 25, 2021. (Steve Mellon/Pittsburgh Post-Gazette/TNS) 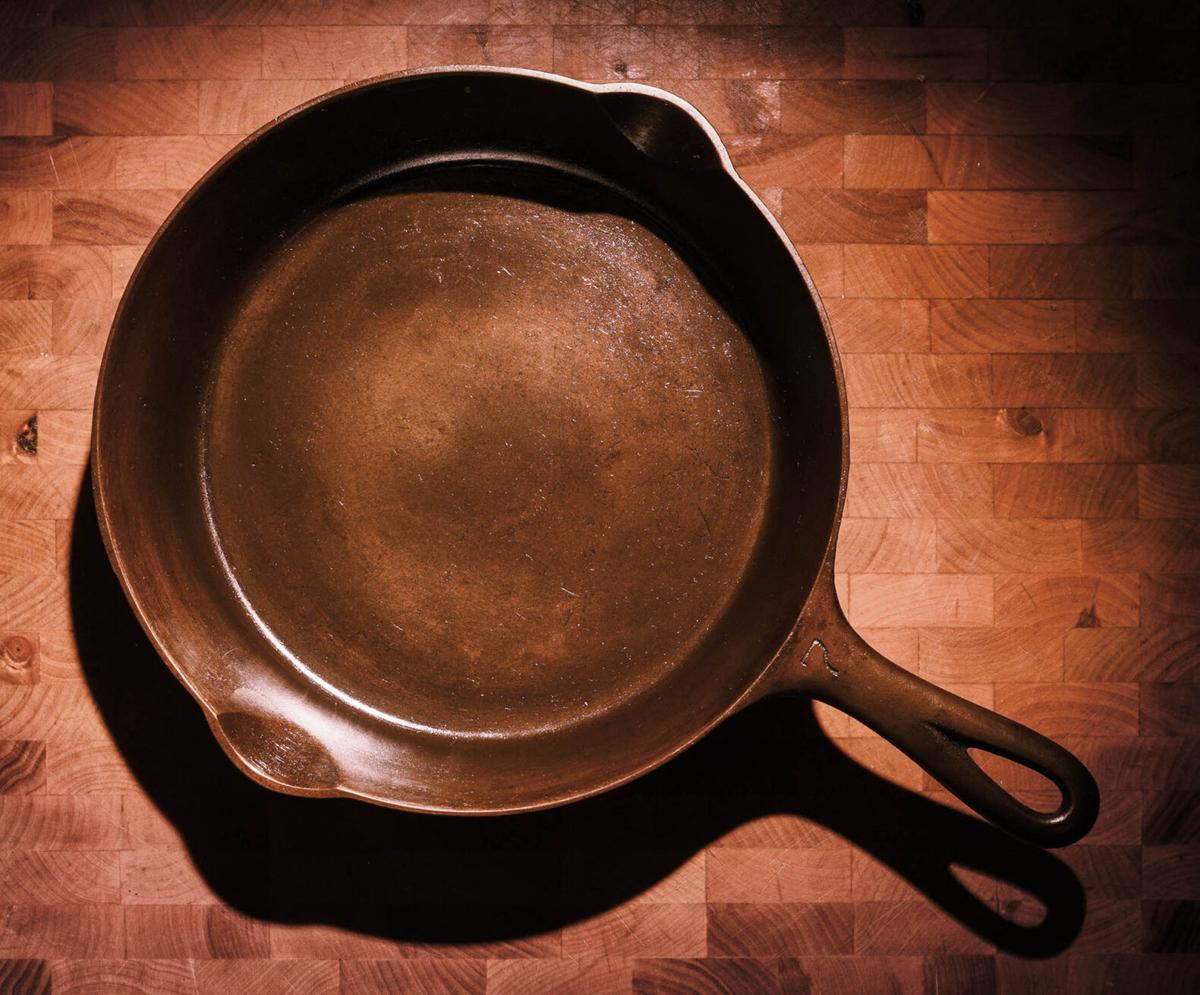 This vintage Griswold cast iron skillet, restored by Sanders, dates back to the early decades of the last century. Steve Mellon/Pittsburgh Post-Gazette/TNS 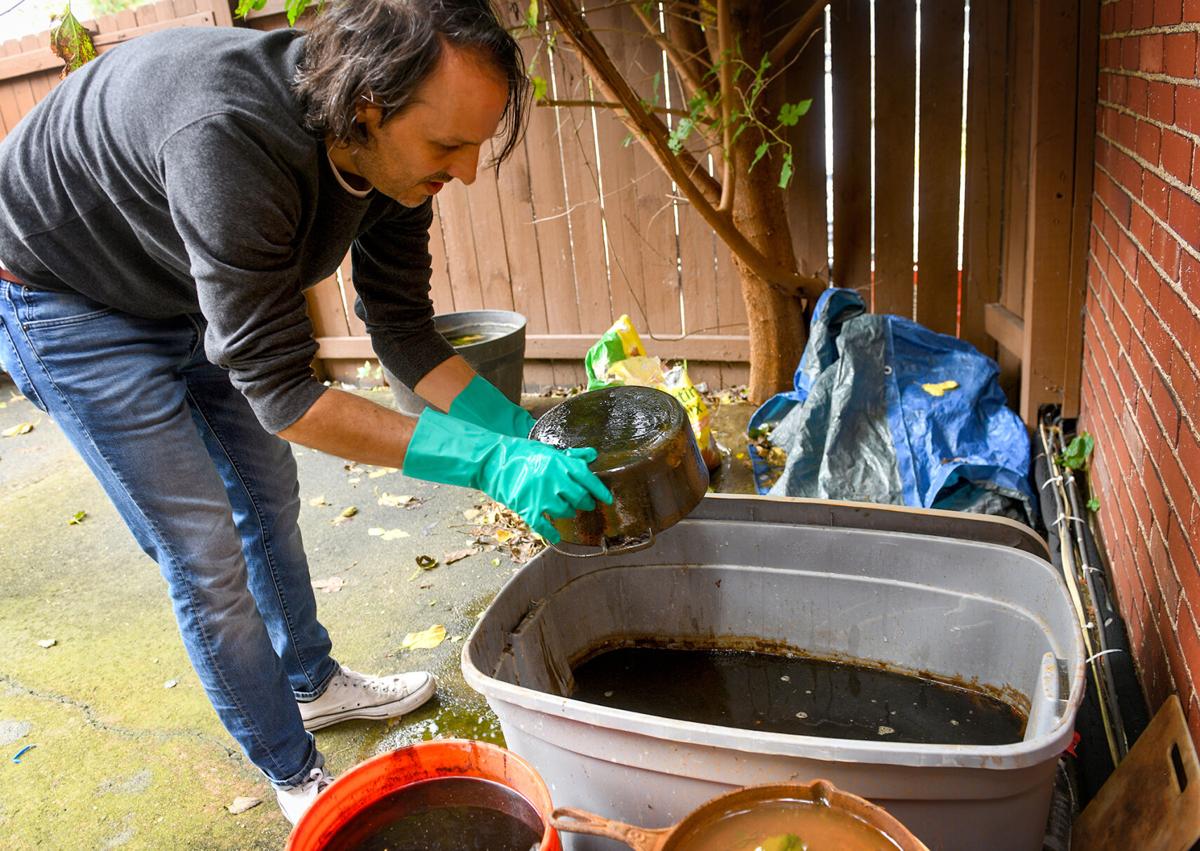 Mike Sanders examines a cast iron pot that’s been soaking in a lye bath at his Lawrenceville, Pa., home on Oct. 25. Sanders, a club owner and concert promoter, restores cast iron cookware with a lye bath that cleans the skillets and pots. Steve Mellon/Pittsburgh Post-Gazette/TNS 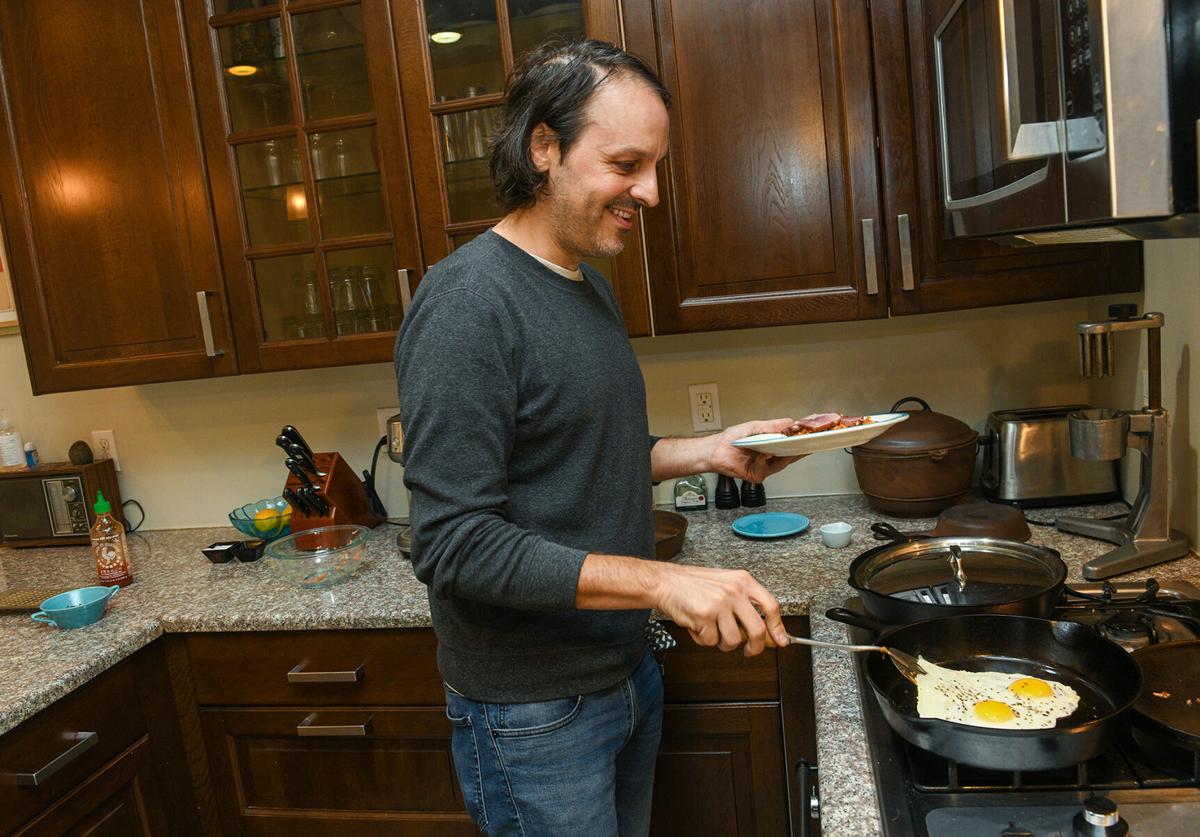 Mike Sanders, a concert promoter and club owner, with one of his restored Griswold cast iron skillets at his Lawrenceville home. Steve Mellon/Pittsburgh Post-Gazette/TNS

This vintage Griswold cast iron skillet dates back to the early decades of the last century. It has been restored by Mike Sanders, a concert promoter and club owner, at Sandersâ€™s Lawrenceville home. Photographed on Monday, Oct. 25, 2021. (Steve Mellon/Pittsburgh Post-Gazette/TNS)

This vintage Griswold cast iron skillet, restored by Sanders, dates back to the early decades of the last century. Steve Mellon/Pittsburgh Post-Gazette/TNS

Mike Sanders examines a cast iron pot that’s been soaking in a lye bath at his Lawrenceville, Pa., home on Oct. 25. Sanders, a club owner and concert promoter, restores cast iron cookware with a lye bath that cleans the skillets and pots. Steve Mellon/Pittsburgh Post-Gazette/TNS

PITTSBURGH — Mike Sanders was destined for a career in the music business ever since he first picked up an acoustic guitar as a teenager in Erie, Pennsylvania.

He was still a student at Slippery Rock University when he started the Strip District-based concert promotion company Opus One in 1997, and he’s owned the live music venue Club Cafe on the South Side since 2011.

The Lawrenceville, Pa., resident, 48, also has a hand in the food industry with Margaux, the jazzy European-style cocktail and coffee bar serving small and shareable plates he opened this past July in East Liberty.

But while you can take a boy out of Erie, can you ever really take Erie out of a boy? For Sanders, the answer is a hard no, thanks to his love for the iconic cast-iron cookware that was produced there in the late 19th and early 20th centuries.

When the pandemic brought Pittsburgh’s restaurant and music scenes to sudden screeching stops last year, the nightlife promoter took up an unusual hobby. He started buying vintage Griswold cast-iron cookware at flea markets, garage sales and thrift stores, and taught himself to restore it. He guesstimates he’s brought around 100 rusty and damaged pans back to life in the months since — some for friends and family, and others for sale to collectors.

“When the shutdown happened, literally all of my business directly tied to nightlife or the bar or concert industry was gone in the snap of a finger,” he recalls. To find his way through the coronavirus abyss, he asked himself: “How do I manage this situation?”

A few dozen YouTube videos later, aided with a scrub brush, a thick pair of rubber gloves and a plastic tub of lye on his back patio, he found the answer.

His newfound hobby didn’t come completely out of left field: His mother Laurie collected and displayed Griswold pans throughout his childhood — to his amusement, he recalls with a laugh. So did both his grandmas, who also lived in Erie. He developed his own appreciation for the vintage pans once he started to cook on them during college, for all the reasons collectors so avidly seek them out — a silky-smooth surface that food refuses to stick to, incredible durability, and a lighter weight that makes them easier to lift and pour from.

“Griswold is the top antique brand, hands down,” he says, adding with enthusiasm, “You can make anything in them!”

People have actually been cooking in cast iron vessels with legs or handles (which allowed them to be hung over or set upright on the hearth) since at least the 1700s. Yet it wasn’t until the kitchen stove was introduced in the mid-19th century that flat-bottom skillets became popular, along with cooking pots.

The Selden-Griswold Manufacturing Company was founded in 1865 to manufacture butt hinges and other hardware. In the 1870s, it expanded its product line to include cookware, and quickly became lauded for its high-quality cast-iron pans, skillets, waffle iron, cake molds and bean pots. The company was eventually closed in December 1957. If your grandmother or mother didn’t hand one down over the generations, well, you were out of luck.

Stamped with a cross inside a double circle, along with the word Erie on the base, Griswold pans today are among the most highly desired among collectors. A fully restored cookware can fetch hundreds or even thousands of dollars from collectors, depending on its size, era and condition, and whether or not it has a heat ring.

In 2019, for instance, a rare Griswold “Spider Skillet” from the late 19th century — thought to be the only one ever stamped with an arachnid — was listed on Ebay for a whopping $8,000.

While he’s always had a general idea of how to keep his personal pans clean and seasoned, learning to strip a pan covered in rust or encrusted with food was a complicated process. Or so Sanders thought until he tried it.

All you really need is some elbow grease, and not being afraid to work with lye, a caustic substance used to make soap that will leave a chemical burn on unprotected skin.

Methods vary, but here’s how he does it: After scrubbing a skillet or pot clean to remove the seasoning and strip it down to the original metal surface, he places it in a lye bath and lets it soak for anywhere from a few days to a few weeks to remove any organic matter. (Other methods include using a lye-based oven cleaner such as Easy Off or electrolysis.)

After scrubbing off any residual matter, he then soaks the pan in a solution of vinegar and water, rinses it with soap and water, scrubs the bottom clean, and dries it. The seasoning process, which gives the pan its wonderfully classic black patina and also makes it nonstick, comes next. He first dries the pan in a 200-degree oven for 15 minutes, then rubs it all over inside and out with Crisco. After buffing the oil out with a dry cloth, he then places it in a preheated, 425-degree oven for an hour so the fat polymerizes. He then lets it cool on its own in the oven and repeats the process two or three times.

The end result is the most silky-smooth surface you’ll ever cook on, he says.

A properly seasoned Griswold pan is ideal for both baking and frying just about anything, because it holds and distributes heat so well, he says. Breakfast food such as eggs and pancakes are especially fun to cook in a cast iron, he says, as they slide right out the pan. He also loves to sear steaks and roast veggies in the oven in them. You also can bake everything from pizza to calzones to apple pies in a cast-iron skillet.

“It’s been a labor of love that kept me busy during Covid,” he says. “My mom was all excited about it, and next thing you know, friends were coming out of the woodwork and I was restoring their pans, too.”

The biggest hurdle for would-be collectors and restorers, he says, is finding a pan that’s not cracked, warped or pitted on the bottom for a cheap price. While in the past collectors could find bargains, today’s sellers tend to know they have a treasure, especially on eBay. If you’re getting a deal, the skillet probably has serious problems — say, it sat in a barn for 30 years filled with water.

At least it’s fairly easy to roughly date a Griswold pan (which helps determine its value), even if the numbering system has nothing to do with size (they indicate the pattern). The various markings and logos are connected to the years of manufacturing. So if you’ve got a skillet with a slant logo in the circle-cross, for instance, you know it was made between 1906 and 1916.

Despite those challenges, Sanders last year managed to collect and restore a complete set of pans from the same era ranging in size from 3 to 12. When he put it up for sale in December, it instantly sold to someone in San Diego for $2,500 — five times his original investment of $500.

“There’s a lot of genuine excitement people get with Griswold pans,” he says, and it’s only grown over the years.

Sanders concedes his hobby is quirky, but it’s also incredibly satisfying, especially given his Erie roots.

“The idea of taking something that’s old and has been sitting around who knows where or cooked on for 100 years and bringing it back to life like it’s brand new .... it’s just great.”