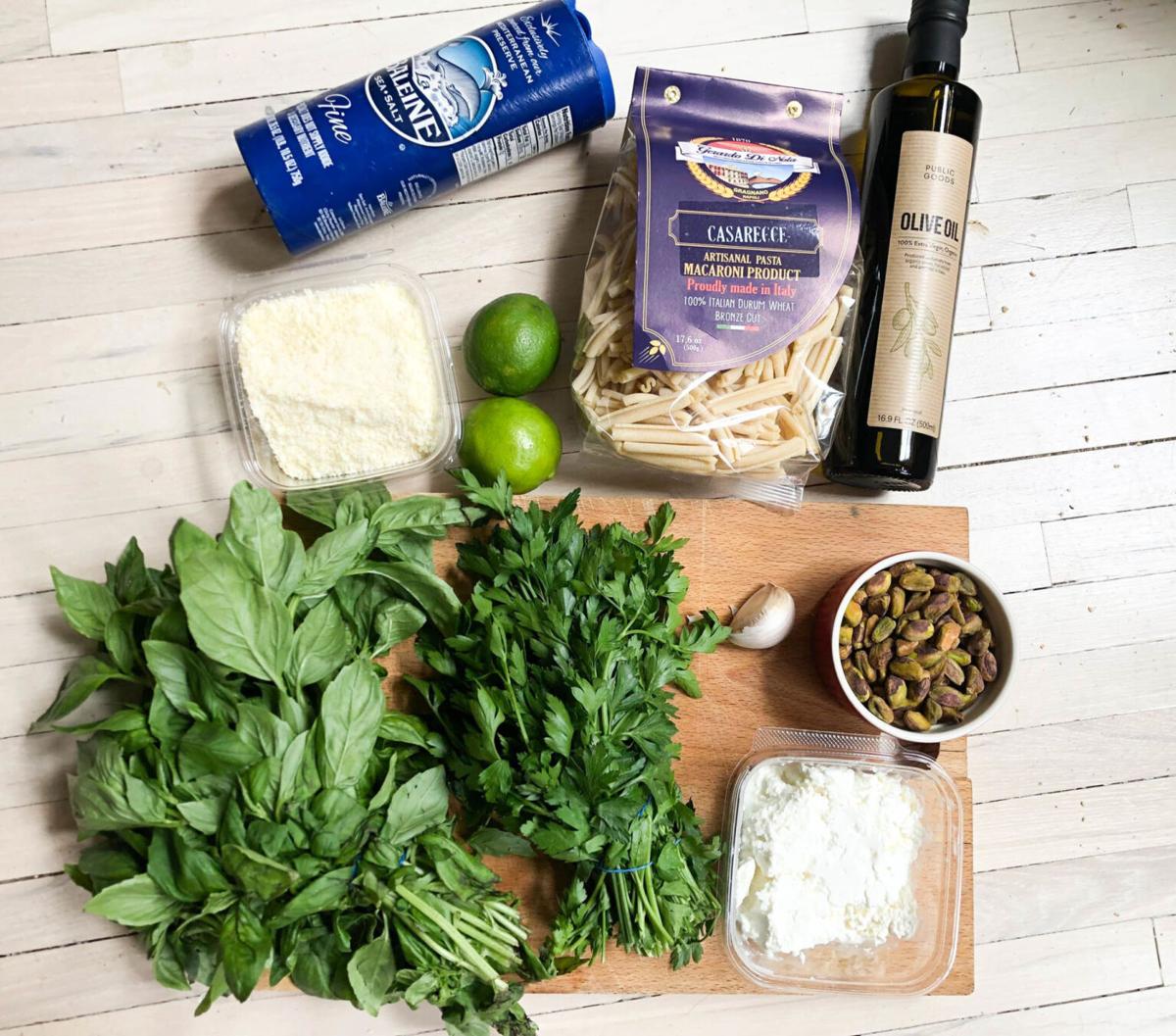 You don’t usually see limes among the ingredients in a pesto. MUST CREDIT: Bloomberg photo by Kate Krader 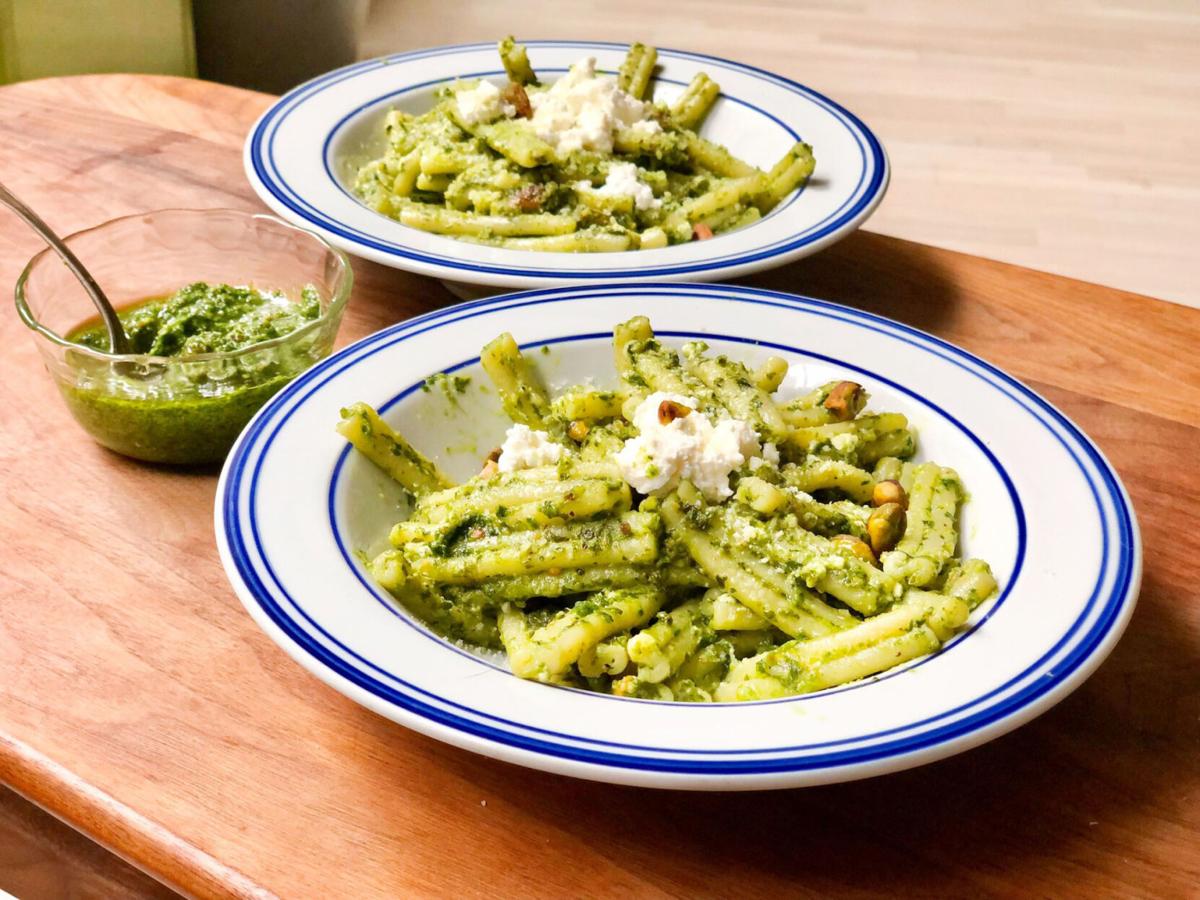 You don’t usually see limes among the ingredients in a pesto. MUST CREDIT: Bloomberg photo by Kate Krader

It’s been a good year for pesto. In the spring, it went viral, thanks to enterprising TikTok users who started adding it to eggs in place of butter or oil. Fans applauded the ease with which it could flavor a range of preparations, whether scrambled or sunny side up.

It also benefited from David Kinch, chef-owner of the Michelin three-starred restaurant Manresa in Los Gatos, Calif., who made a version with avocado that provides a California take on what he calls “the greatest sauce in Italian cuisine.”

Now that basil is taking over most gardens, there’s a new version of pesto to obsess over. It features pistachios and — even more unconventionally — lime. But the result is a powerful green sauce for home cooks to use in celebrating the rest of summer.

The recipe is featured in the upcoming cookbook Sicilia: A Love Letter to the Food of Sicily by Ben Tish (Bloomsbury; Aug. 10; $32). Tish is a chef whose London restaurants include the celebrated Norma, where the focus is on Sicilian food. He’s had previous cookbooks that covered southern Italy, including Moorish recipes, but this is his first deep dive into the storied, diverse Mediterranean island.

The book is dedicated to various aspects of the cuisine, ranging from the strong Arabic influence to the importance of frying. There are recipes for everything from the non-Sicilian-sounding street food lasagna bread (filled with cherry tomatoes, basil, and provolone) to smoky artichokes with lemon and the long, thin local sausages known as salsicca, with red wine and grapes.

In the process of researching, Tish came across this singular pesto from the Bronte region, known for the quality of its pistachios. “Very simply, they use pistachio instead of other nuts, as there’s so many kicking around,” says Tish. “Everything has pistachios in it.” If you can find Bronte nuts, use them; they’ll make the pesto brighter green.

The addition of lime was Tish’s hack. “Normally, it would be lemon,” he says. “The lime just seemed right to me. The recipe is 70% authentic.” Tish also chose to take cheese out of the sauce and make it an optional garnish because he wanted to make it vegan.

His version is one of the brightest, freshest-tasting versions of the sauce you will find. It’s ideal for summer. The pistachios add an underlying sweetness you don’t usually find, but the real surprise is the hit of summery, tangy lime.

Combined with the garlic, it’s a refreshing touch that grabs your attention. The sauce’s flavors come through best when the pasta is served at room temperature or chilled for a picnic or al fresco meal.

The following recipe is adapted from Sicilia, by Ben Tish.

1/2 cup toasted salted pistachios (about 2.5 oz), plus more to garnish

In a blender, combine the basil leaves, parsley leaves, garlic, pistachio nuts, lime zest and juice, and pulse until roughly chopped. With the machine on, pour in the olive oil until smooth. Season well with salt and pepper.

Off the heat, stir in the ricotta (if desired). Spoon into bowl, garnish with a few pistachios and a little more ricotta and serve warm, at room temperature.