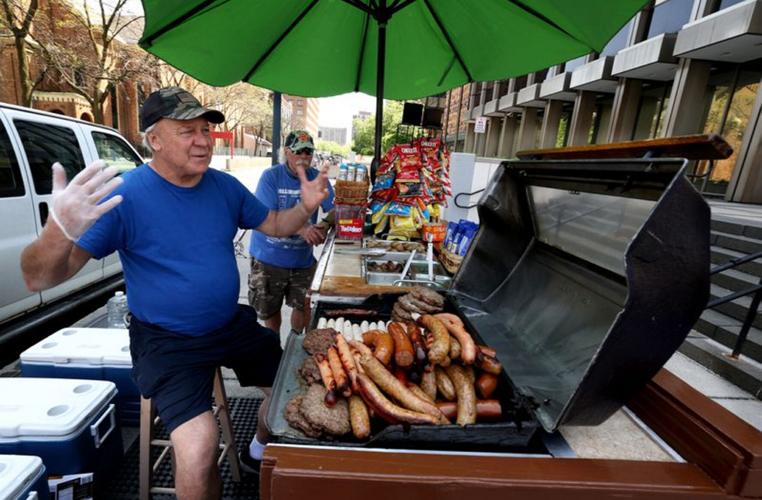 Hot vendor Paul Waleski starts his day at the corner of Warren and Madison opening packages of hot dogs, coney’s and hamburgers. Paul Waleski has been in the street food business for 30 years. Dennis Net/syracuse.com 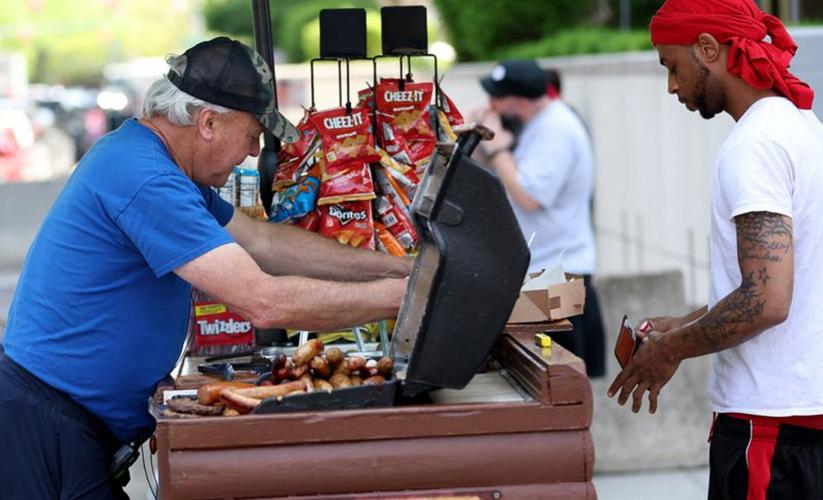 Hot vendor Paul Waleski stand is at the corner at the corner of Warren and Madison and he sells hot dogs, coney’s and hamburgers and snacks. Paul Waleski has been in the business for thirty years. Workers take their break for lunch. Dennis Nett/syracuse.com 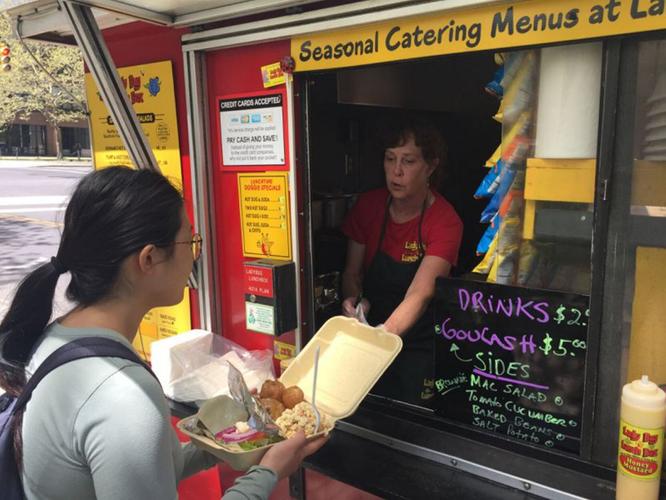 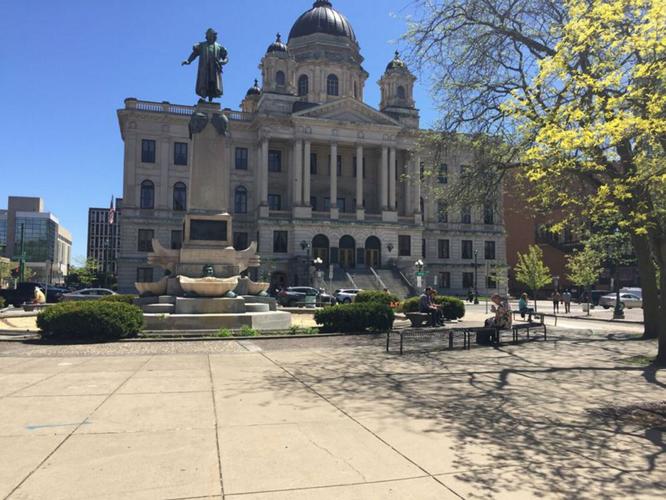 Columbus Circle in downtown Syracuse was once home to a handful of food and ice cream carts each summer. They have been absent from the area in recent years. Don Cazentre/syracuse.com

SYRACUSE — It’s just after noon on a sunny weekday in downtown Syracuse when a man in bright yellow construction vest steps up to Tall Paul’s Dog Cabin.

“Can I get a dog?” he asks the man behind the hot dog cart stationed at the corner of Warren and Madison streets near the Equitable Towers.

“Hey,” vendor Paul Waleski replies. “If you can’t get a dog here, I’m in trouble.”

Paul “Tall Paul” Waleski has been in this business for almost 30 years. At one time, he shared the downtown sidewalks and plazas with almost a dozen other food cart vendors. He always prided himself on being the first one out each season, often starting in the snow and cold of mid-March.

In recent years, he hasn’t had to compete to be first. He’s often been the only sidewalk “push cart” vendor operating downtown. As recently as 2016, there were six cart vendors downtown, according to city records and syracuse.com archives.

Food trucks, which are licensed separately from the sidewalks carts, have also dwindled after a recent surge, This year just one food truck, Lady Bug Lunch Box, has a regular spot, parking most days on East Fayette Street near Fireman’s Park.

In 2019, there was a boom in food trucks permits, with as many as 12 licensed to operate in or around downtown, city records show. But that was due mostly to a weekly food truck “rodeo” in Clinton Square, which has been discontinued.

COVID-19, which cut the number of downtown workers in the past two years, hasn’t helped, particularly for the sidewalk vendors, who are locked into specific locations.

But more workers are now returning. Could there be a resurgence in outdoor food vendors downtown?

Alex Ippoliti thinks so. This month, Ippoliti launched a food cart, Skinny’s, in Lincoln Plaza at the corner of Salina and Fayette streets. It began last week with snacks like deep-fried Oreos and funnel cakes, but Ippoliti plans to add hot dogs, sausages and more.

Eventually, he hopes to operate as many as six carts offering various foods and snacks around downtown.

“If you look at old pictures, this city was built on carts, on vendors on the streets and sidewalks,” said Ippoliti, a veteran at several local restaurants who has also worked for mobile food operators. “And then it looked like it was disappearing. I just thought, let’s bring that back. It’s like something old that’s new again.”

Thirty years ago, dozens of vendors sometimes competed to sell food on the go in the city. Among the dozen or so downtown permits awarded each year went to longtime regulars like Bob’s Barkers in the Chase Lincoln bank plaza, Louie’s Dog House in Hanover Square and Gary Kimber’s Roadside Café and others in Columbus Circle.

By 1991, the competition got so fierce the city set up a “lottery” held each December to award the most coveted spots.

When Waleski showed up last December for the lottery at City Hall, he was the only vendor there. Ippoliti applied for his permit later.

Still, Skinny’s and Tall Paul’s currently occupy just two of the 33 sidewalks spots and 12 park or plaza spots available citywide this year. Most are downtown, but there are a few in other neighborhoods.

City records show just one sidewalk vendor with a 2022 permit for a location outside of downtown: Mercedes Jones has a permit for Soul Food Extension at the corner of Midland Avenue and Oxford Street, near the Onondaga Creekwalk. It’s also not far from the new JMA Wireless 5G manufacturing plant on Cortland Avenue.

There are currently no sidewalk carts at some of the principal locations where you could easily find them in the past. Columbus Circle outside the Onondaga County Courthouse, which in the past has had three or four vendors at a time, has none.

That’s partly because the former vendors have retired or moved on and, Waleski believes, there aren’t many people interested in replacing them.

“Nobody wants to work anymore,” is Waleski’s opinion on the lack of new vendors. “People think, ‘Oh you just stand around and serve hot dogs. But I’ve got to get supplies, lug all this stuff here, set up and prepare and then break it down. It’s work.”

The decline in the number of vendors seeking locations hasn’t been sudden and didn’t just happen with COVID. By the middle of the last decade the lottery was drawing just a handful of applicants, including two or three food vendors and a couple of ice cream carts.

At around the same time, there was a brief surge in the then-new concept of food trucks seeking on-street parking spaces.

The food trucks are also more rare downtown. There were gatherings called food truck rodeos in locations like Clinton Square and Lincoln Plaza, but the only regular downtown event now takes places on Fridays outside the Everson Museum of Art.

The city has been wrestling with the issue of sidewalk carts, and more specifically, food trucks for several years.

In 2018, the Syracuse Common Council approved an ordinance sponsored by Councilor Michael Greene that cut fees for food truck permits and expanded the places they were allowed to set up. The food truck licenses were were set at $500 per season, while the sidewalk cart fees remained at $1,500.

Greene argues the difference is due to the fact that the food trucks aren’t guaranteed a specific spot each day, while the sidewalks carts have exclusive rights to a location.

But that created tension with some of downtown’s existing restaurants, often referred as “brick-and-mortar” businesses.

In 2020, the city reacted to what Greene calls the “pushback” from downtown brick-and-mortar restaurants and stopped the Clinton Square gatherings. Then the pandemic hit.

Eric Ennis, the city’s director of business development, said he’s hopeful that a return of more downtown workers to their offices will spur an increase in the sidewalk carts, food trucks and more.

“We are starting to see that trend change, seeing more office workers return to the downtown core,” he said. “We know what happened (in 2020 and 2021) and now this summer we’ll see what opportunities that opens up for the future.”

The city, he said, also has a “Summer Dining Guide” posted on its web site that offers assistance to businesses interested in making use of the city’s rights of way — streets, sidewalks, park space etc. That includes a continued push for business to make use of curbside space through what are known as “parklets.”

He also suggests that cart or food truck operators can look for opportunities to set up on private property, which would fall outside of city regulations.

That could help ease the tension between between the seasonal vendors and the permanent businesses.

Merike Treier, director of the Downtown Committee of Syracuse, said in 2020 that she heard that some restaurants reported a 40% loss of business on food truck rally days in Clinton Square.

Now, she says, the goal should be to find what she calls “balance” for all the businesses that want to operate downtown.

“Our year-round goal is to create opportunities for people to come downtown,” she said. “That should be done in a way to lessen the impact on existing business while allowing opportunities for food trucks and other operators.”

Greene said he has no immediate plans to offer any new legislation in the council to address either sidewalk carts or food trucks. Like Ennis, he thinks there’s an opportunity to assess the demand as workers return.

“There’s a missed opportunity,” he said of the pushback against food trucks. “I think they add a lot of vitality downtown. We need to do anything we can to bring that vitality and energy downtown.”

That’s what Alex Ippoliti is hoping to accomplish by bringing more food carts back to the area.

“I believe in downtown,” he said. “This used to be the place to be. It can be that again.”