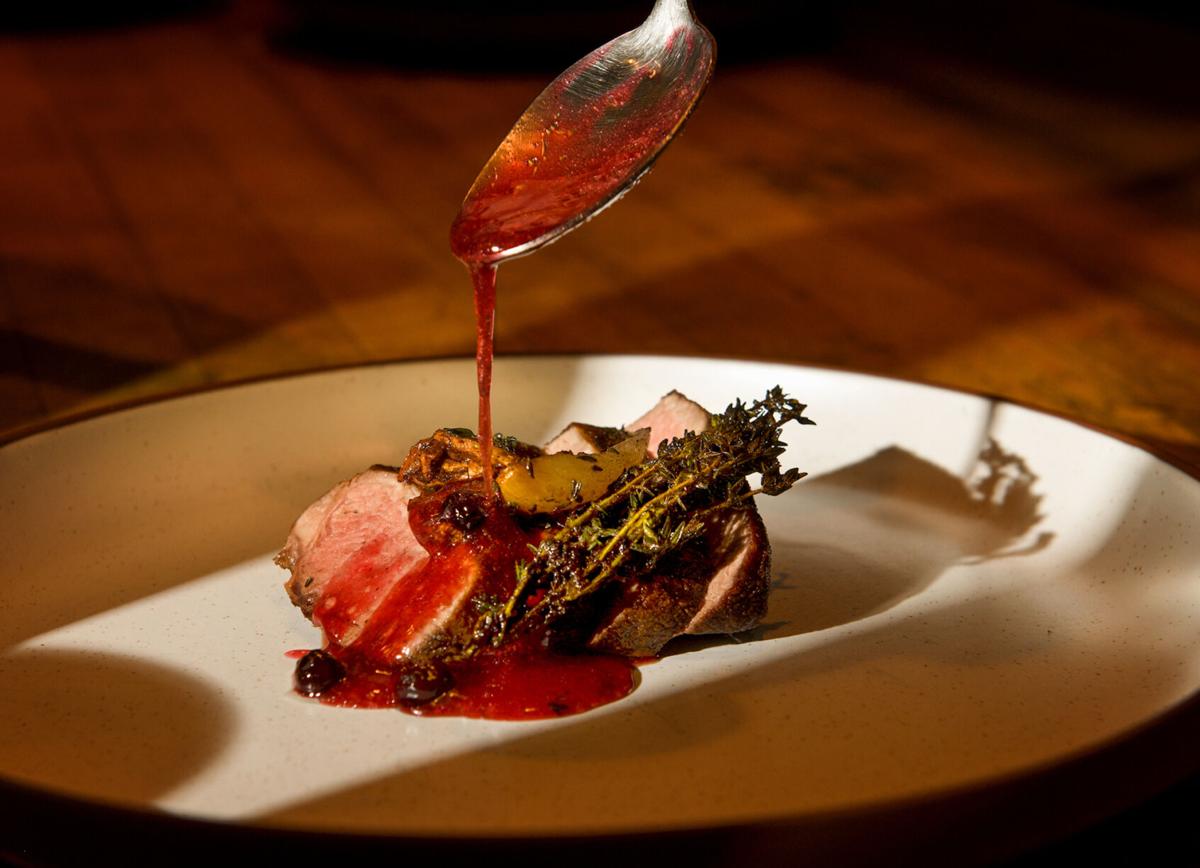 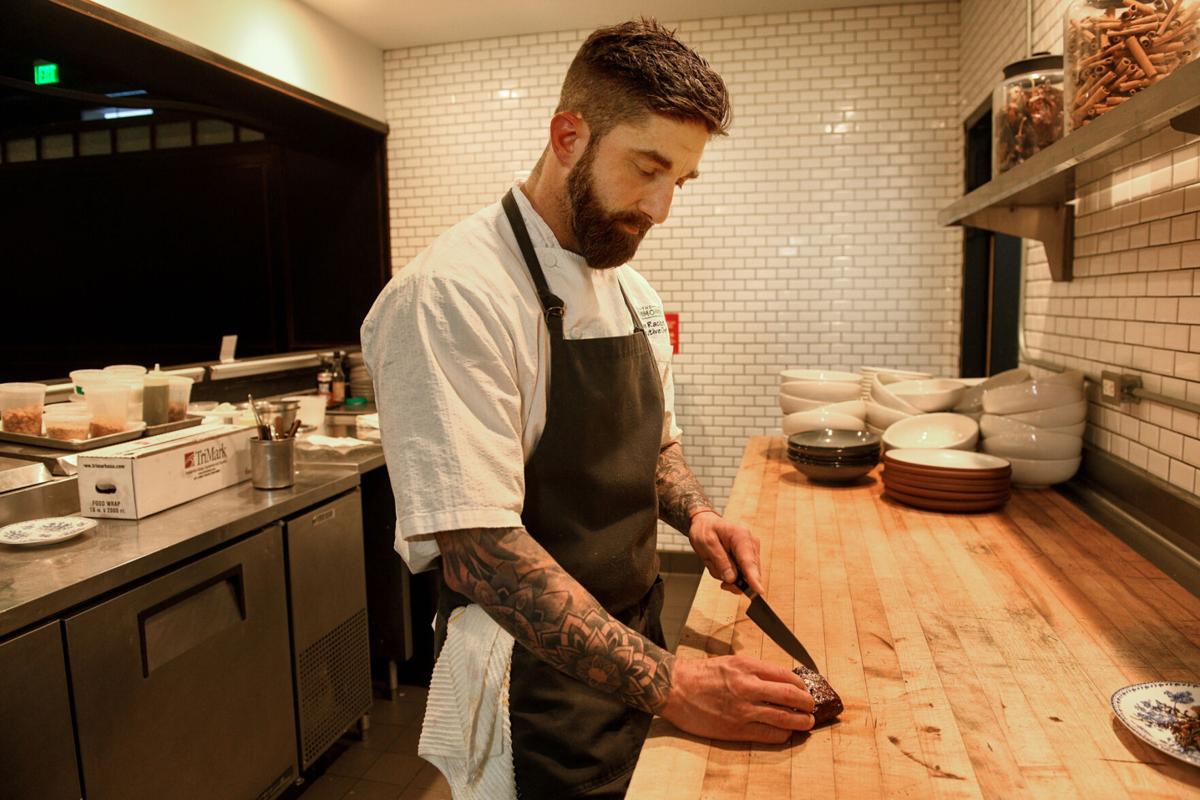 PITTSBURGH — Dave Racicot has been a deer hunter longer than he’s been a professional chef, which is to say: a very long time.

The Indiana, Pennsylvania, native was around 10 when he starting hunting with his maternal grandfather, Joseph Farine. He quickly discovered it can be pretty boring sitting in a stand for hours at a time, patiently and quietly waiting for a buck or doe to wander within sight.

“I went every year with Pap,” recalls Racicot, 43, who’s been executive chef at The Commoner restaurant in Hotel Monaco, Downtown, since 2019. “And it was always boring, cold and wet.”

What made it worth it was the fact the family got to eat venison whenever someone was fortunate enough to harvest a deer.

“Everyone who says they hate it or don’t like it, it’s been overcooked.

“It just tastes so good,” he says of the meat, which, depending on the cut, was roasted, dried into jerky, stuffed into sausage or turned into a spicy, hearty chili.

Racicot continued that tradition when he grew up and switched to archery hunting, which he says is more challenging, emotional and intimate than hunting with a gun. “If I didn’t enjoy eating (deer meat), I wouldn’t do it,” he says.

While he has yet to harvest a deer this year, he still has plenty of venison in a deep freezer in his Oakmont basement from previous years, all of which he processed himself from start to finish. He has some in the fridge in his garage too.

Not a fan of venison? You’re not alone. Deservedly or not, deer meat has something of a bad rap outside of the hunting community.

Racicot has heard the reasons why a thousand times, and shakes his head every time: It’s too dry! It tastes gamey! It’s not safe to eat!

Actually, says the chef who has cooked at Nemacolin Woodlands Resort’s Lautrec, Notion and Poulet Bleu, if your venison dish tastes lousy, well, it’s because you’re not cooking it right.

“Everyone who says they hate it or don’t like it, it’s been overcooked,” he says. But serve it rare to medium, and “it’s amazing.”

Rich in iron and full of B vitamins, venison is lower in fat and calories than beef. Because it’s so lean, and fat protects against inexperienced cooking, it’s pretty easy to overcook and dry it out. In addition, poorly processed meat just won’t taste good. Deer can only hang in coolers for a limited time before spoilage begins, and this year’s shortage of processors means some hunters may end up butchering their deer themselves, even if they don’t know how.

To create a winning dish, you not only need to cook it properly — hot and fast for tender cuts like steaks and chops, and low and slow for the tougher round or shoulder — but also make sure you procure it from a trusted source.

In Pennsylvania, it’s illegal to sell deer meat unless it’s farm-raised and inspected. But the good news is, even if you aren’t friends with a generous hunter, venison is fairly easy to find around here.

It will, however, come from a farm instead of the woods, and it likely won’t be the white-tailed species you see in Pennsylvania’s woods. Most retail venison, including that from Highbourne Deer Farms in Dallastown, York County, comes from red deer raised on pasture, grain and hay.

It generally costs a bit more than beef. Strip District Meats sells ground venison from New Zealand for $11.99 per pound. The store also has venison bistro filets ($62.99 for 3 pounds), venison medallions ($27.99 for four 4-ounce medallions), venison tenderloins ($55.99) and a venison Frenched rack ($78.99). All are vacuum-packed and frozen.

You also can purchase it online or by mail order through retailers such as Whole Foods, Cabela’s and D’Artagnan.

Its relatively high price is why you don’t often find venison on restaurant menus, says Racicot. It can easily run $48 a pound, with fine dining places often charging upwards of $42 for a prepared 5-ounce portion, “which is a really small piece of meat,” he says. “So it’s difficult.”

To drive home how easy it is to cook a piece of venison well, Racicot recently prepared a 6-ounce tenderloin from his private stash in The Commoner’s commercial kitchen.

After covering the steak with a very generous amount of salt — a lot of it falls off in the pan, he explains — he crushes a couple cloves of garlic on the stainless-steel counter with the palm of his hand, peels it and sets it aside with a small bundle of fresh thyme and half a sliced shallot.

Placing a small carbon steel skillet on the burner over high heat (you can use any thick pan you’re comfortable with), he pours in 3 tablespoons of grapeseed oil, a neutral oil prized for its high smoke point. When the oil sizzles and emits a slight whiff of smoke, he places the tenderloin in the pan.

“You want it hot and fast initially,” he says.

After about 2 minutes, he turns the steak over, adds 3 tablespoons of butter and immediately turns down the heat. After the butter melts into the oil, he adds garlic, shallot and thyme, and starts spooning the fragrant, sizzling liquid over the steak again and again.

“This is where the cooking process happens,” he says. While it’s not necessary, basting allows the meat to cook faster and more evenly.

Four minutes later, when the steak is a golden, caramel brown, the chef declares it done. The entire kitchen smells terrific.

After letting the meat rest for at least 4 minutes — 133-135 degrees is right for mid-rare to medium — he slices it across the grain, plates it with the aromatics and spoons a simple huckleberry gastrique on top.

“The longer you let it sit without it getting cold, the better,” he notes. A taste reveals Racicot is on the money: While you can tell you’re not eating beef, it doesn’t taste gamey, just distinctive in a good way.

When he cooks venison at home for his wife, Kelly, Racicot typically prepares it with winter spices and roasted root vegetables because “it just makes sense.” It’s a little more upscale served on the job, with braised red cabbage, caramelized apples and sauces made with beets and juniper berries.

“See?” he says with a smile after a reporter takes two bites. “It’s good!”

“This recipe works well, it’s easy to make and any number of substitutions can be made and it’s still tasty,” Racicot says. He likes to garnish it with cheese and sour cream, with some crusty bread or oyster crackers on the side. Cocoa powder adds to its depth and richness.

Add oil to large, heavy-bottomed pan set over moderate heat. Add onion, peppers and habanero (if using) and cook until peppers are tender, 7-10 minutes. Add garlic and cook until fragrant, about 30 seconds, then add spices and venison. Cook, breaking meat up with a spoon, until it’s no longer pink, about 5 minutes.

Reduce heat to low and cook chili for a few hours, stirring occasionally as it thickens.

Serve hot in a bowl with whatever garnish you like.