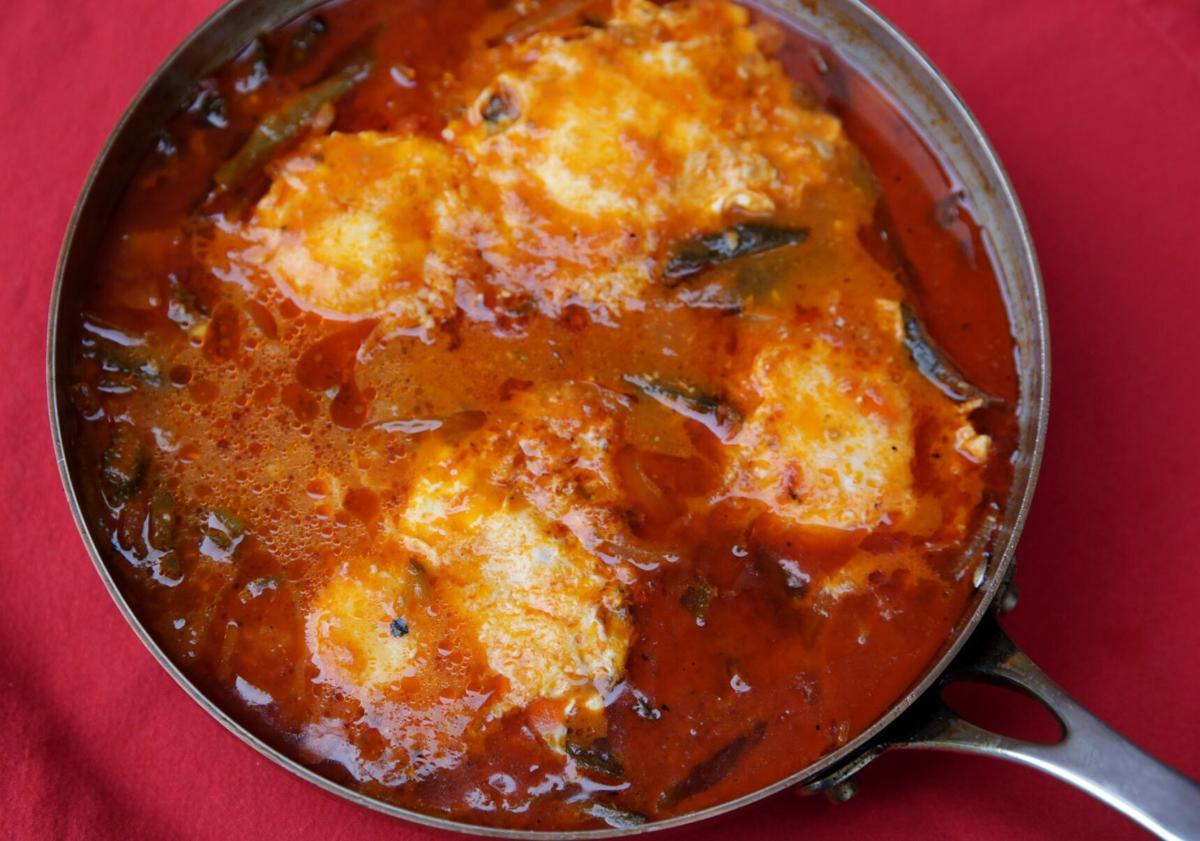 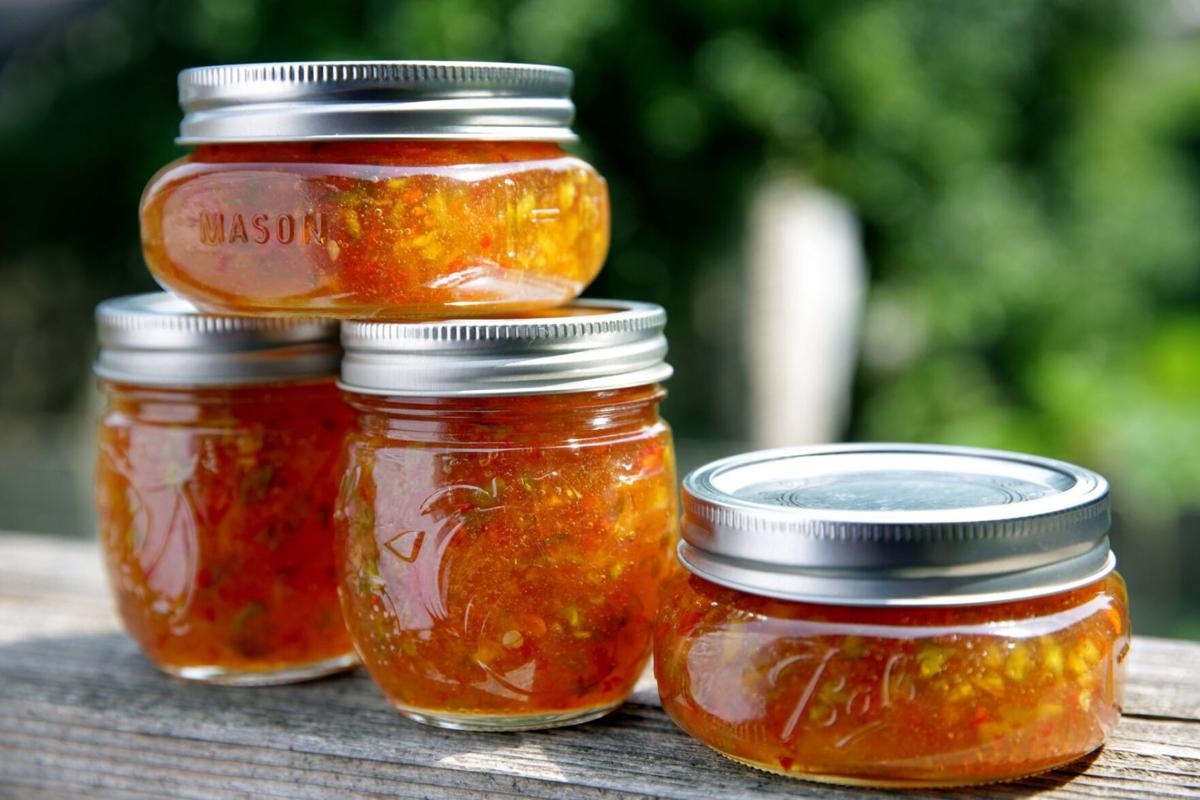 Homemade Hot Pepper Jelly is made with red, yellow and green bell peppers and gets its heat from jalapeno peppers. Hillary Levin/St. Louis Post-Dispatch/TNS 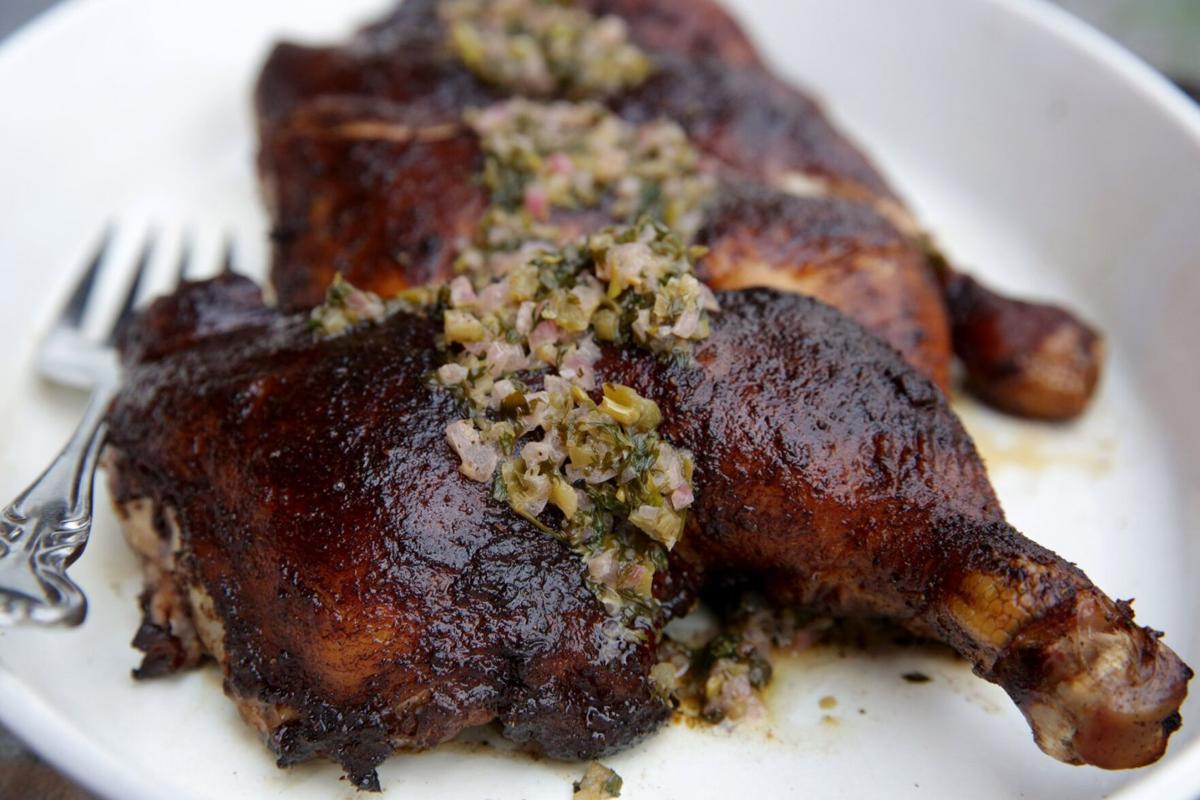 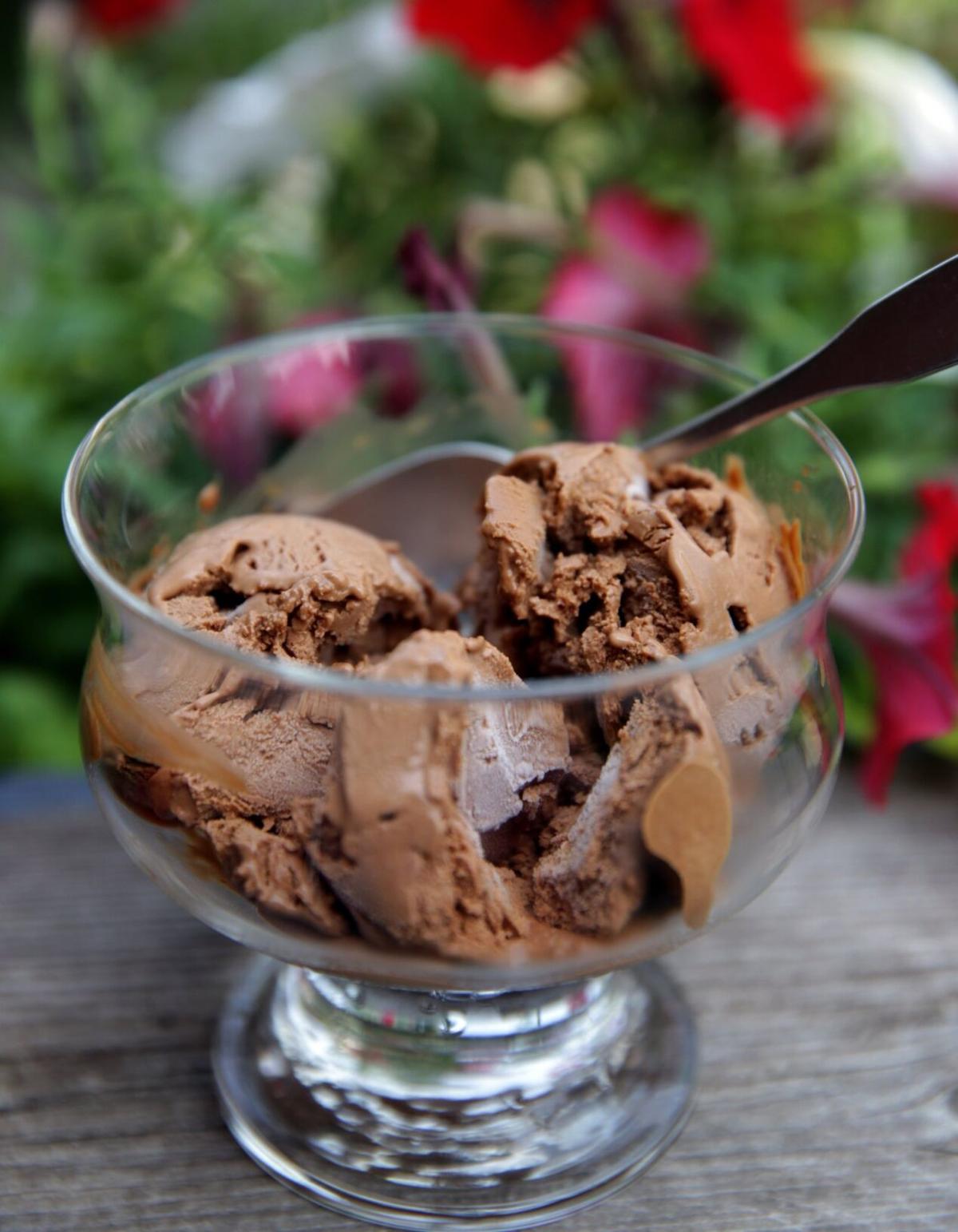 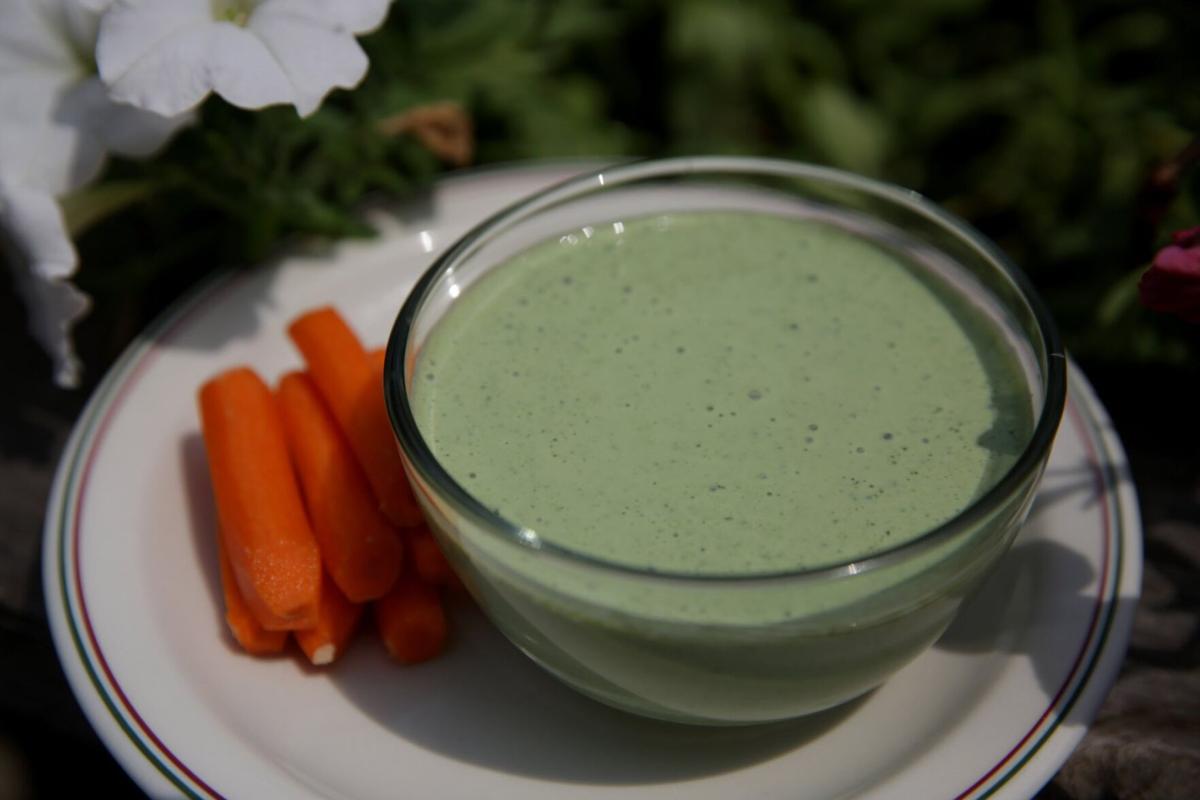 Homemade Hot Pepper Jelly is made with red, yellow and green bell peppers and gets its heat from jalapeno peppers. Hillary Levin/St. Louis Post-Dispatch/TNS

They look so innocent.

There is little about a chile that hints at the danger lurking inside. They dangle colorfully, seemingly harmlessly, from a plant’s bright foliage, or they are piled welcomingly at a grocery store or farmers market.

And yet, a single bite can cause intense pain, an “if-I-get-out-of-this-I’ll-never-sin-again” kind of pain.

Some chiles are mild. Easygoing. Friendly. And you can’t always tell, just by looking at it, which way it is going to be.

More than 150 types of chiles are grown and eaten in the world, and they range in heat from the utterly mild bell pepper to the ludicrously inedible hot Carolina Reaper.

For the purposes of this article, and my digestive tract, I decided to see what I could make from some of the most readily available fresh peppers, the kind found in any grocery store.

I also decided to make a chocolate ice cream with dried pasilla negro chiles, which you have to find at international stores, because I saw the recipe and I thought it sounded really good.

It was. It was really, really good. But you’ll have to wait until the end of this article to read about it because I want to save dessert for last.

Instead, I’ll begin with hot pepper jelly, which I’ve never particularly cared for all that much. I didn’t hate it, but I wouldn’t cross the street to have some.

But that was before I made homemade hot pepper jelly. And let me tell you, it was spectacular. I’d cross half the streets in town to have some more. Served as a glaze for grilled fish or chicken, or on a cracker with a bit of cream cheese, it’s a little bit hot and a little bit sweet.

Actually, it is very sweet (you don’t want to know how much sugar is used to make six cups of the jam). But the sugar is just what you need to even out the bite of the apple cider vinegar and make a lovely backdrop for a combination of chopped jalapeno and red, yellow and green bell peppers.

All of that chopping, along with the process of canning, takes some time. So for kicks — I get my kicks in unusual ways — I also made an easier version of hot pepper jelly.

And it works. It successfully mimics hot pepper jelly, and you can whip it up in five minutes — though it still has to chill for several hours. It’s good enough, but I’d only cross a few streets for it.

For an entree, I made Spiced Grilled Chicken With Cilantro Lime Butter, which was easier than it sounds — and just as good.

This is a two-part recipe, a paste to spread on the chicken before grilling, and then a melted butter-based sauce to drizzle over the top after it is done.

The paste is supposed to recall the taste of mole poblano, which it only does in the most general of ways. But still, its bright notes of cinnamon and balsamic vinegar, muffled by cocoa and brown sugar and spiced up with chili powder, make a coating for chicken that is simply delicious.

The pepper part of the recipe comes in the sauce. A chopped serrano pepper is mixed with cilantro, red onion and lime juice, plus the melted butter, for a traditional Mexican taste.

It’s a satisfying, spicy dish for a brunch, and the broth of poblano chiles, tomatoes and onions can even be made the day before.

I’ll admit that to do it right will take some work. The poblanos have to be charred, and their skins then scraped away. And the tomatoes have to broiled, or at least browned on all sides in a hot, dry pan.

But don’t worry about it. Do the work. You’ll be glad you did.

Next up was a refreshing sauce that can be used either as a salad dressing or as a dip for crudites, jalapeno-cilantro yogurt sauce. It is a gorgeous concoction of mint leaves and cilantro in yogurt, with lime juice and a hint of cumin. The heat comes from a chopped jalapeno.

It all comes together in a couple of minutes, and it tastes just as fresh as it looks.

And then, for dessert, came the ice cream, a dark chocolate-chile ice cream.

The pasilla negro pepper that is used in this dish is quite mild and provides only what recipe author Rick Bayless calls a “gentle glow.” But it also has a distinct flavor of raisins, which emphasizes and enhances the deeper notes of the bittersweet chocolate.

Even so, the chocolate and the pepper need to be tempered by a rich base, which this ice cream absolutely has. It’s a custard, with four egg yolks and equal amounts of heavy cream and half-and-half. Vanilla and Kahlua each make their own contributions to the flavor.

It’s an indulgence, but one of the better indulgences in which you can indulge. Give it a try. It may be the best pepper you ever eat.

3. Stir in sugar and return to a rolling boil for 1 minute.

4. Remove from heat. Skim off any foam from top.

5. Ladle jelly evenly into sterile jars, filling to 1/4 inch from top of jar. Cover with flat lids and screw on screw bands tight.

6. Place jars into canner with hot water that is not boiling. Water should completely cover jar. Cook on high heat to reach a boil. Process for 5 minutes.

8. When jars are completely cooled, check seals by pressing centers of lids with finger. If lid springs back, lid is not sealed and refrigeration is necessary.

Stir together all ingredients in a small pan over medium heat until jelly and marmalade are melted and mixture is blended. Cool. Cover and refrigerate 8 hours.

Puree jalapeno, yogurt, cilantro, mint, lime juice, cumin and a generous pinch of salt in a blender until very smooth. Taste and season with salt and more lime juice, if desired.

2. Arrange grill for indirect heat. When grill is hot, place chicken on grate, cover and cook until done, about 30 minutes for white meat or 45 minutes for dark meat. Chicken is cooked when a meat thermometer inserted into the thickest part of the largest piece reads 165 degrees.

Adapted from a recipe from tasteofhome.com

EGGS POACHED IN A CHILE-TOMATO BROTH

Note: The sauce can be made well ahead of time and can even be frozen.

1. Leave the stems, if any, on the poblanos. Place directly over the open flame of a gas stove or a wood or charcoal grill. If using electricity, smear the chiles with a light coating of oil and place them directly under the broiler. Turn the chiles from time to time to allow the skin to blister and char lightly all over. Do not allow the flesh to be burnt through.

2. Place charred poblanos immediately into a plastic bag and leave them to steam for about 10 minutes. This helps to loosen the skin. The skin can now be slipped off easily with your hands; this should be done over a strainer, because the little pieces are tough and can block a sink drain. Rinse the chiles briefly, but do not soak in water. Remove stems and seeds and slice chiles into narrow strips.

3. Rinse tomatoes and place on a hot, ungreased pan or griddle over medium heat. Cook, turning occasionally, until soft all the way through and the skin is lightly charred. Or, cook tomatoes about 3 inches under a broiler, turning once, until mushy and slightly charred.

4. Heat the oil in a large skillet and cook the onion until translucent, about 2 minutes. Add the chile strips to the pan and let them cook for about 3 minutes, stirring frequently to avoid sticking.

5. Process the broiled tomatoes in a blender or a few seconds — do not overblend — and add them to the onion-chile mixture. The sauce should have some texture. Let it cook over fairly high heat for about 10 minutes, or until the sauce is well seasoned and has somewhat reduced. Add the water and salt and continue cooking for a minute or so more.

6. Crack the eggs, one at a time, into the hot broth. Arrange the slices of cheese on top. Cover with a lid and let the eggs poach very gently until set, 3 or 31/2 minutes.

Recipe from “The Essential Cuisines of Mexico” by Diana Kennedy

2 tablespoons Kahlua, or other coffee liqueur

Note: The base can be made several days ahead and refrigerated, covered. The finished ice cream is best served within a day or two of being frozen.

1. Make the chile infusion: In a small skillet heated over medium, toast the chile by pressing it flat against the skillet with a metal spatula until it is very aromatic, around 10 seconds or longer per side. Place in a small saucepan, add the half-and-half, and heat over medium until steaming but not boiling.

2. Remove from heat, cover and let steep for 10 minutes, then pour into a blender jar and process until the chile is smooth. Press the mixture through a medium-mesh strainer back into the saucepan.

3. Set up a double boiler: Set up a 4-quart saucepan with 1 inch of water. Choose a 3-quart stainless steel bowl that you can nestle into the pan without touching the water. Bring the pot of water to a boil over high heat while you’re preparing the custard base. Do not heat the water with the stainless steel bowl over it.

4. Cook the base: Reheat the half-and-half mixture just until it begins to steam. Spread the chocolate into a thin layer over the bottom of a bowl, and add the salt. Pour the warm chile-infused mixture over the chocolate and stir until the chocolate has begun to melt. In the stainless-steel bowl (for the double boiler) whisk together the sugar and egg yolks until thoroughly combined, then whisk in the chocolate mixture.

5. Reduce the temperature under the pot of boiling water to maintain a gentle simmer. Set the bowl of custard base over the simmering water and whisk frequently, scraping down the sides of the bowl regularly with a rubber spatula, until the mixture thickens noticeably, about 5 minutes. The custard is sufficiently cooked when it reaches 180 degrees — dip a wooden spoon into it and run your finger through the custard on the spoon, the line will hold clearly when done. 6. Cool the base: Fill a large bowl halfway with ice and water. Nestle the custard into the ice and whisk regularly until completely cool. Refrigerate if not using immediately.

7. Finish the base, freeze the ice cream: Stir the heavy cream, vanilla and Kahlua into the base. Freeze in an ice-cream maker according to the manufacturer’s directions. Scrape into a freezer container and freeze for several hours to firm.