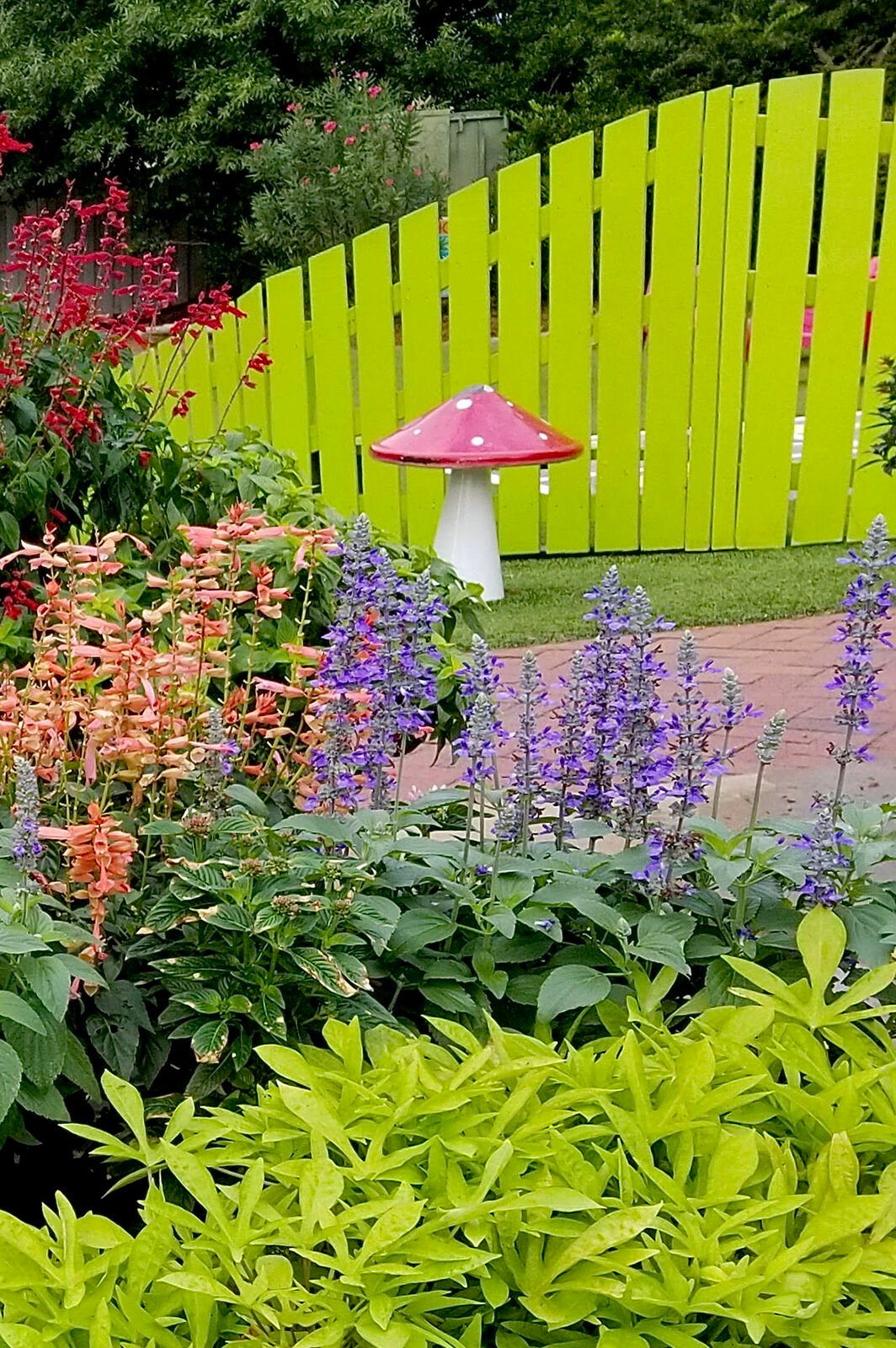 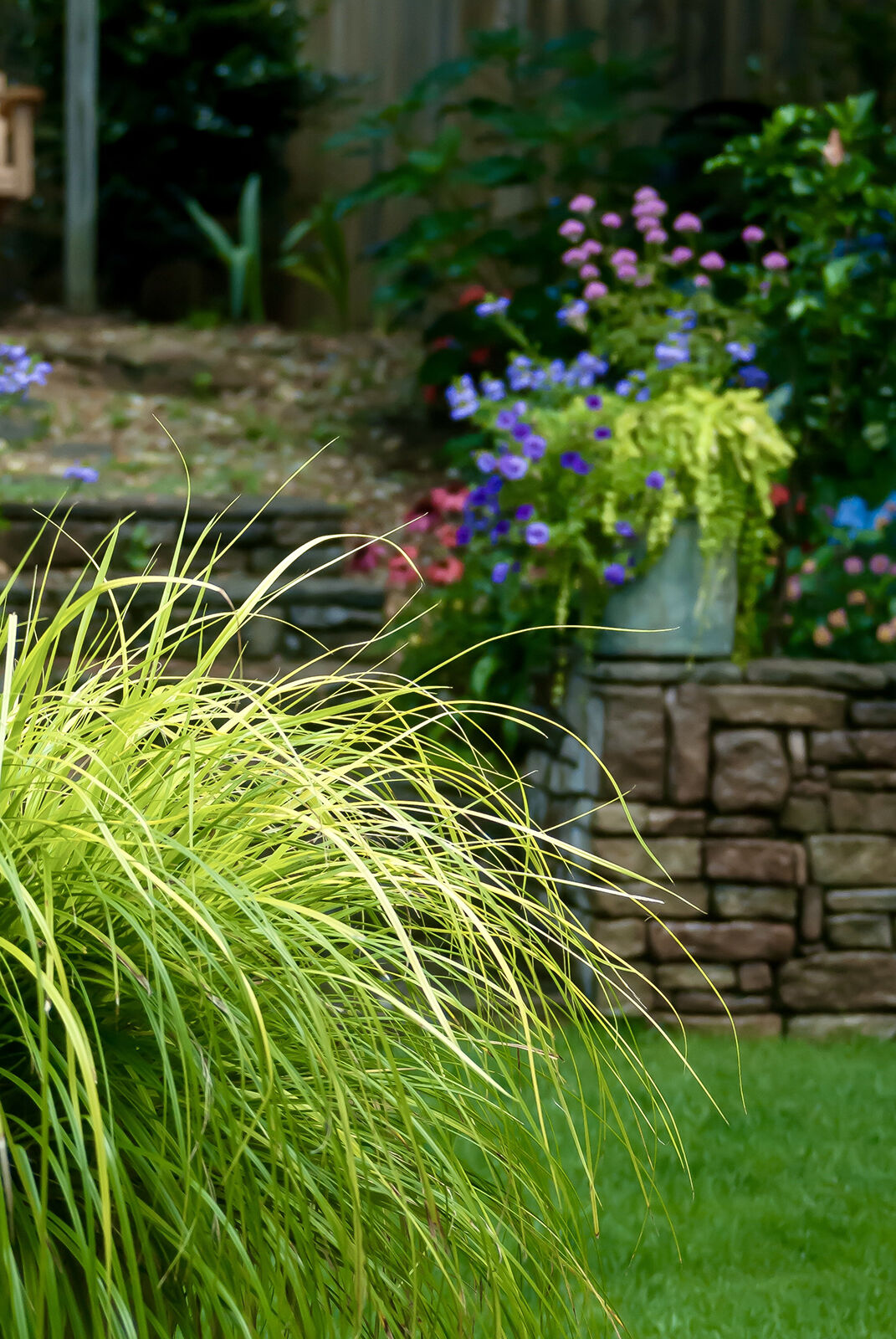 The lime green of Goldilocks lysimachia in the distance echoes the color of the majestic looking Everillo carex grass in the foreground planter. Photos by Norman Winter/Tribune News Service 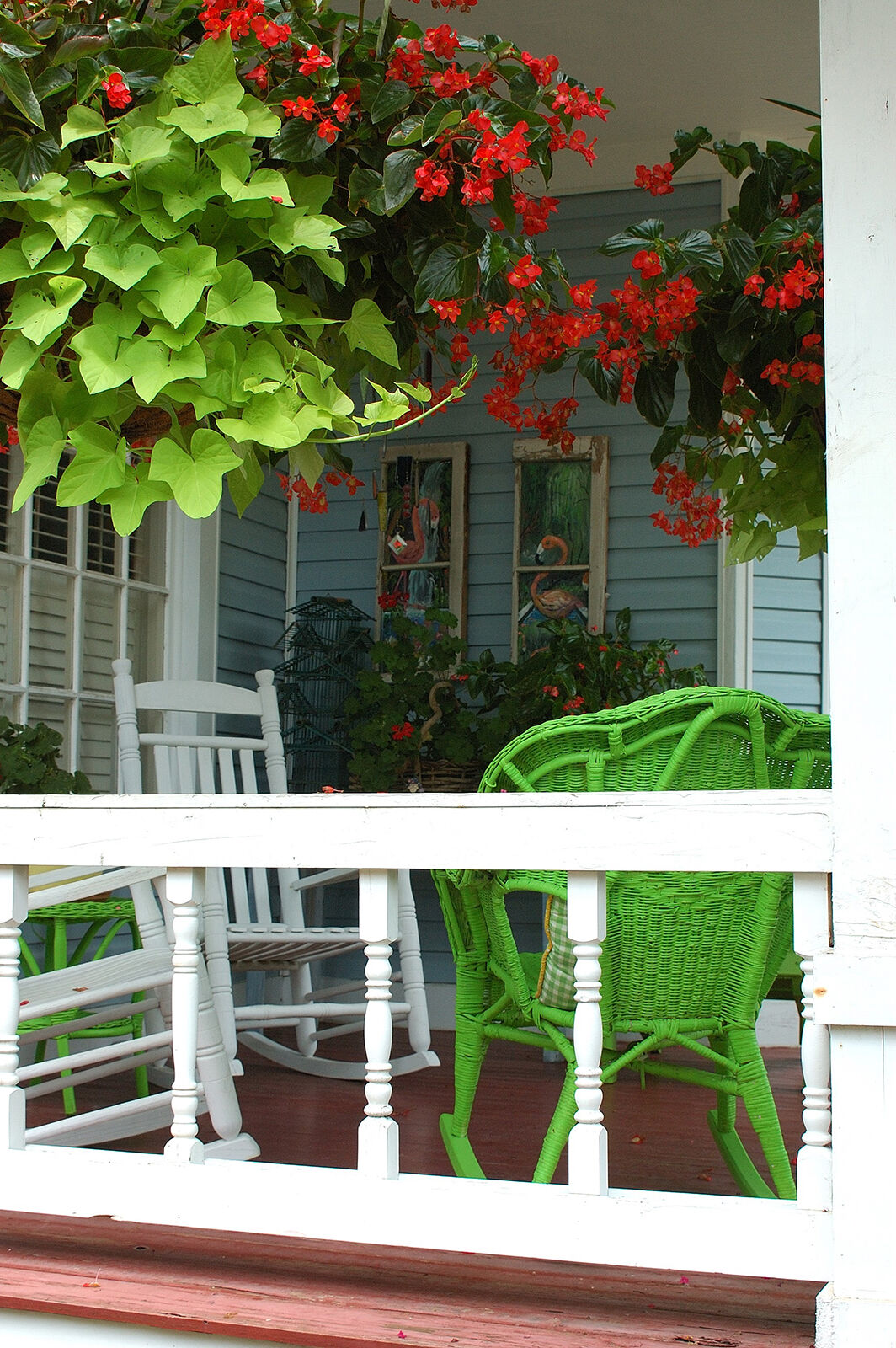 The lime green of wicker furniture and ornamental sweet potatoes create a dazzling echo of color. 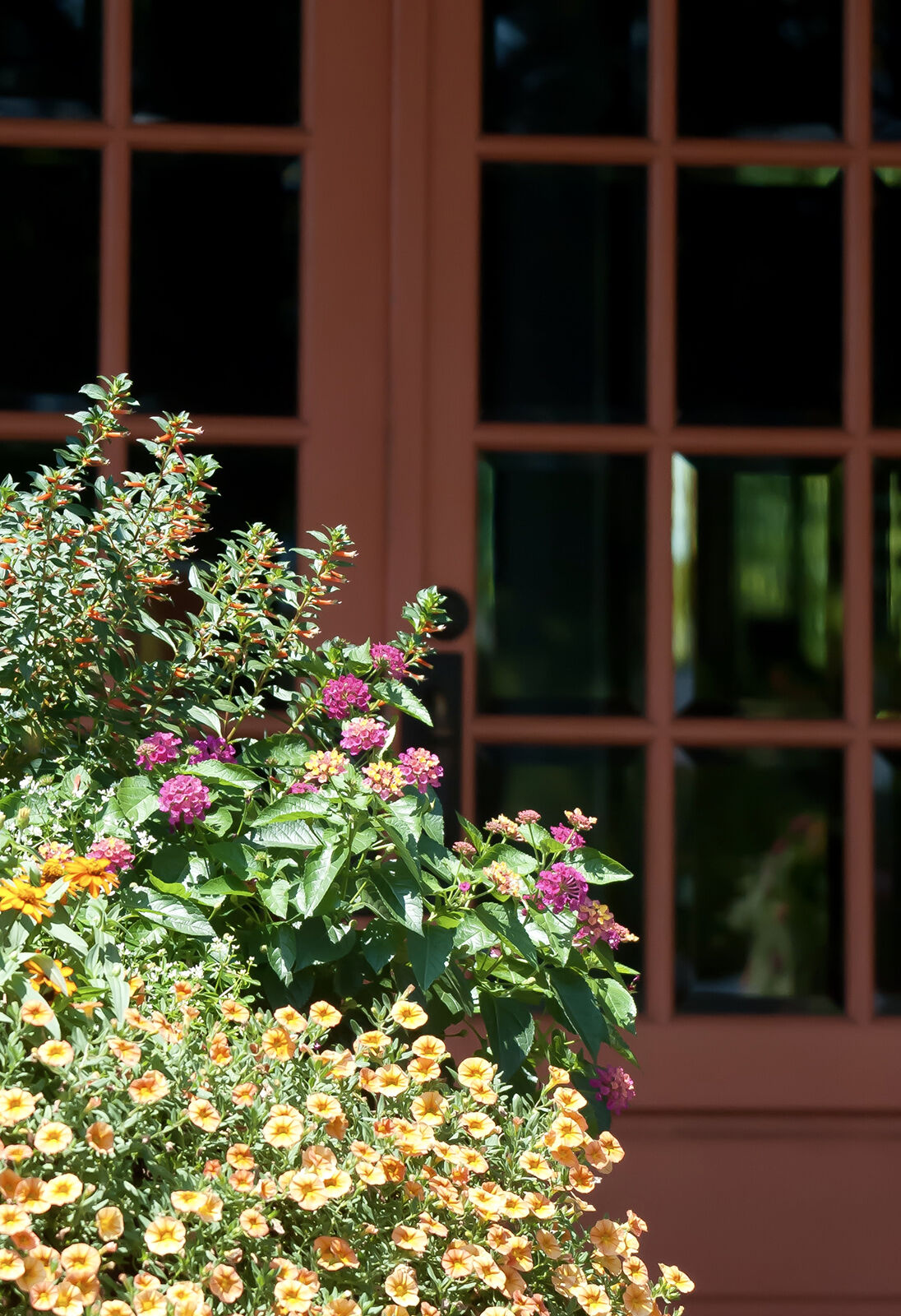 The soft orange apricot color of the door is brought to life even more thanks to the echoing colors of the Superbells Dreamsicle calibrachoa, Vermillionaire cuphea and Luscious Royale Cosmo lantana. (Norman Winter/TNS) 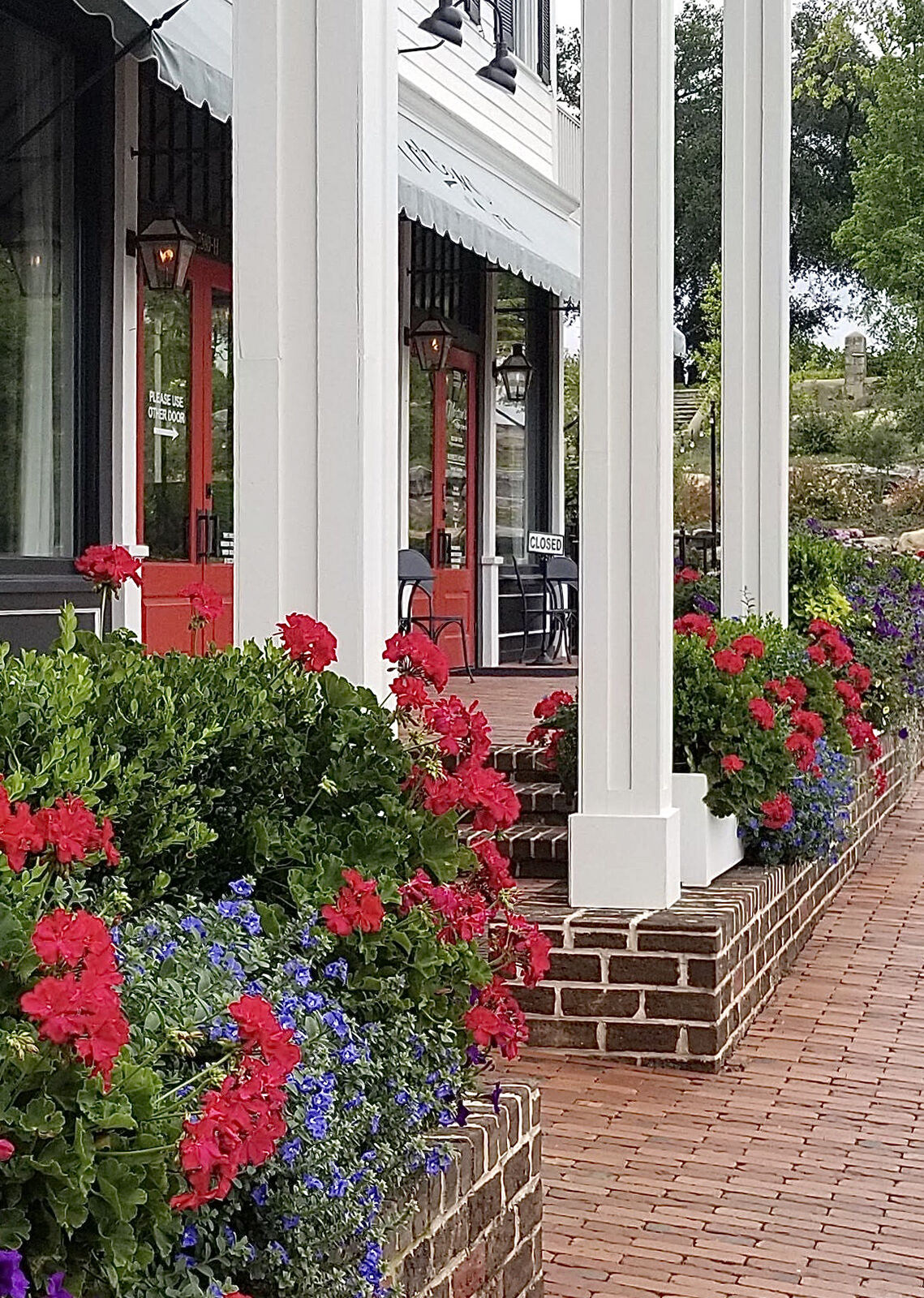 Calliope Red geraniums match perfectly echoing the red of the doors to this restaurant. (Norman Winter/TNS) 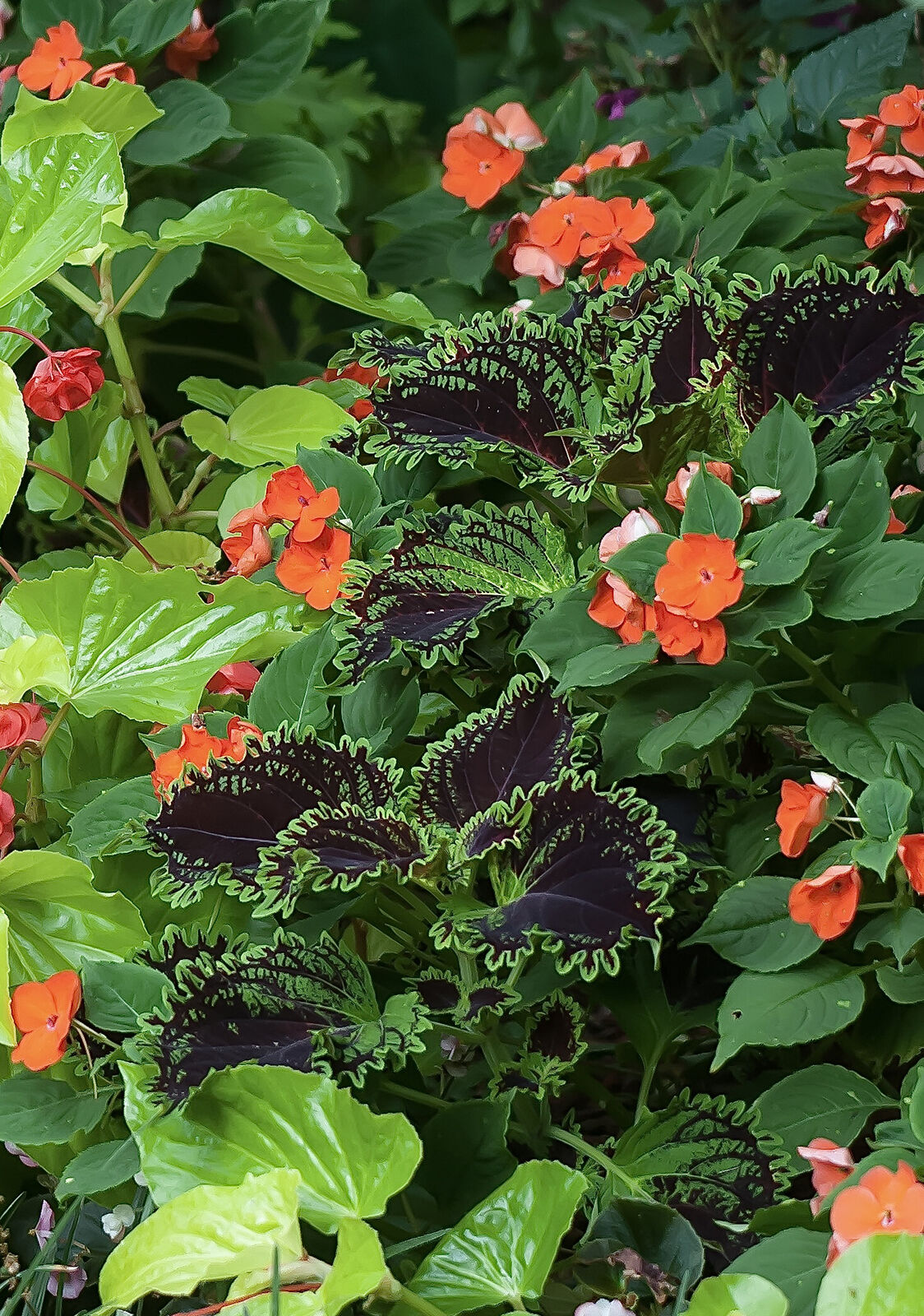 The lime green of Goldilocks lysimachia in the distance echoes the color of the majestic looking Everillo carex grass in the foreground planter. Photos by Norman Winter/Tribune News Service

The lime green of wicker furniture and ornamental sweet potatoes create a dazzling echo of color.

The soft orange apricot color of the door is brought to life even more thanks to the echoing colors of the Superbells Dreamsicle calibrachoa, Vermillionaire cuphea and Luscious Royale Cosmo lantana. (Norman Winter/TNS)

Calliope Red geraniums match perfectly echoing the red of the doors to this restaurant. (Norman Winter/TNS)

Oh, the possibilities with that Wicked witch! Son James dazzled me again with a combination planting featuring this year’s hot new coleus ColorBlaze Wicked with coleus and Canary Wing begonia. Immediately I noticed his carefully intentioned design of having the lime green margins of the coleus echo the golden-lime of the Canary Wing begonia.

While I often refer to terms like triadic harmony, complementary color and monochromatic colored schemes it is the “echo of color” in the garden that thrills me the most. The echo can be subtle or seemingly shouted but it is a clear clue the designer was using this form of repetition to grab you, causing you to grab a click or two with the camera.

The coleus and begonia echo of color was between plants but once you start echoing from plants to doors, plants to furniture and plants to wood trim like shutters, or colorful picket fences, then the excitement or visual stimulation created seems to go off the charts.

The son uses the echo ploy in commercial landscapes throughout the city. I was noticing an apricot-orange door to a business the other day and the planters welcoming the clients featured Luscious Royale Cosmos lantana, Superbells Dreamsicle calibracha and Vermillionaire cuphea, each one having a role in echoing the color of a most memorable door.

Something similar happened at the bright red festive looking doors welcoming patrons to a restaurant in North Columbus, Ga. In planter boxes along the sidewalks, boxwoods provide evergreen structure, but flowers like Blue My Mind evolvulus and the echoing color of brilliant Calliope Red geraniums gave the look of being hand selected to match the doors.

Those were echoes with doors but my friend Barbara Harvey in Kosciusko, Miss., always kept me mesmerized with color echoes from flowers and foliage to furniture whether in the backyard or the front porch of her Victorian house. One year she took my breath away with her front porch creation.

She created a sitting area combining two white wood rockers and two wicker pieces. One wicker piece was a small table between the rockers and the other was a fairly large Victorian looking wicker rocking chair. The wicker pieces were painted with the most shocking shade of lime green that could be purchased or mixed at the paint store.

The echo however came from the largest hand made iron hanging basket anyone would attempt to hang above a porch railing. In the basket were monstrously large Dragon Wing Red begonias and a lime green ornamental sweet potato cascading toward the wicker rocker.

As a horticulturist and writer, I get invited to a lot of home and garden tours. Of course, that was pre-pandemic. At one in Madison, Mississippi, there was a color echo at a Creole Cottage style home that was a thrill for the senses. Similar to the Kosciusko setting, lime green was the star of the show.

This time lime green shutters were hanging against a neutral wood. An old-world clay pot echoed the neutral wood of the house. In the pot however was a tall burgundy coleus with lime green flecks and a lime green sweet potato hanging downward. It was, to say the least, picture perfect.

With the cool season coming up I want to share a trick we did while I was the director of the Coastal Georgia Botanical Garden. I would like to give credit to Jamie Burkhardt who was director of horticulture at the time. There is a deep love for coral bark dogwoods, which show out their wood in the winter.

In large urns and pottery filled with pansies and other cool season flowers, Jamie would echo the color of the blossoms with painted branches that had been pruned from trees. So, imagine pink petunias and purple pansies looking as if there was a hot pink bark dogwood, or in another, branches of purple and yellow in the containers with purple and yellow pansies.

In the creation of the landscape, we preach repetition of plant material to bring harmony and of course to eliminate the possibilities of the two-by-two Noah Ark syndrome. In other words, two of everything at the garden center. I assure you a repetition of color or echo or color will be like creating vignettes, each a living landscape portrait.