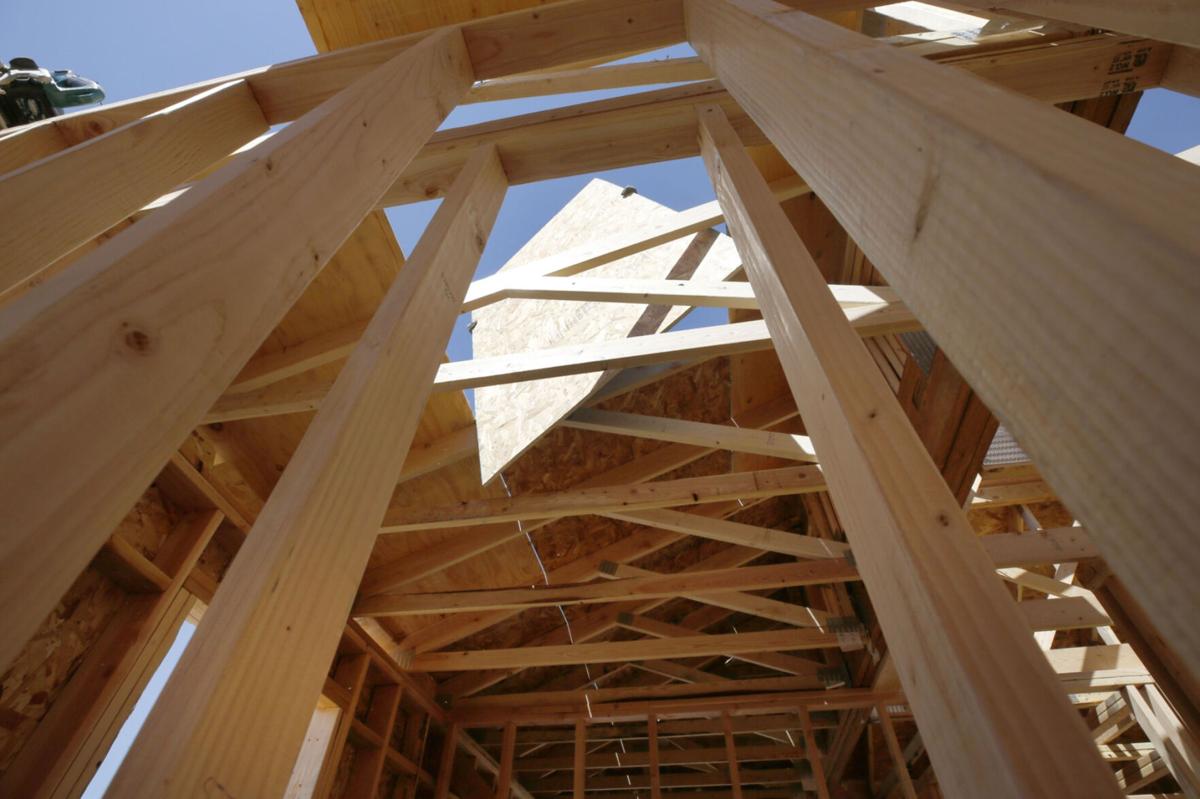 A contractor lifts a sheet of plywood while framing the roof of a home under construction in Park City, Utah, on Aug. 14, 2020. George Frey/Bloomberg 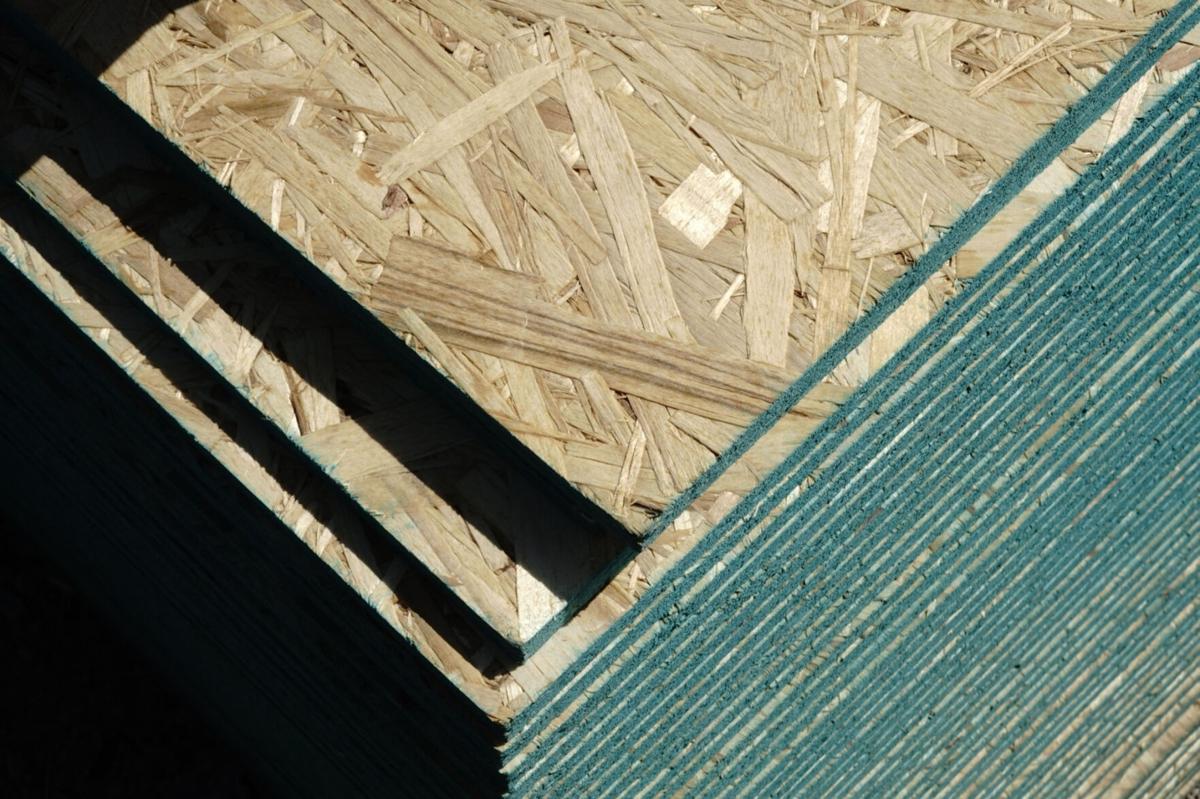 Sheets of plywood on a construction site in the Otay Ranch master planned community in Chula Vista, Calif., on Sept. 1. Bing Guan/Bloomberg

A contractor lifts a sheet of plywood while framing the roof of a home under construction in Park City, Utah, on Aug. 14, 2020. George Frey/Bloomberg

Sheets of plywood on a construction site in the Otay Ranch master planned community in Chula Vista, Calif., on Sept. 1. Bing Guan/Bloomberg

Americans are coughing up $4,600 more on average to buy their dream home than six months ago, thanks to a record run-up in prices for a once-cheap plywood substitute.

Prices are on a tear for those bonded wood-chip sheets commonly used as sheathing for walls, floors and roofs in new home construction. Oriented Strand Board, or OSB, has long been used as a low-cost alternative to plywood, but the product now fetches a higher price as increased demand and tight supplies lead to delivery delays and elevated construction costs in the U.S. and Canada.

“It’s difficult to get, the lead times are out,” said Lorne Winship, general manager at Pacific Homes, a west coast builder specializing in custom prefabricated homes, adding that the premium over plywood is “absolutely crazy.”

While the rally is hurting builders and buyers of new houses who already suffered from surging lumber prices earlier this year, it’s bringing windfalls to manufacturers such as Norbord Inc. and Weyerhaeuser Co.

OSB soared to a record $729 per thousand square feet in September and held that level through mid October while southern pine plywood prices plunged in the past month, according to lumber pricing company Random Lengths.

The engineered-wood product is at a premium to southern yellow pine plywood for the first time since 2006, according to RBC Capital Markets analyst Paul Quinn.

“We expect that this is at least partially due to higher housing starts given that buyers were less willing to substitute,” Quinn said in an Oct. 12 report, adding that OSB is used more heavily than plywood in new residential construction.

Tight supplies have caused delivery delays for smaller builders like Pacific Homes, owned by Winnipeg-based All-Fab Building Components Inc. Winship said he’s being told OSB deliveries to his Vancouver Island company will take two to three months now instead of the typical two weeks. His woes are somewhat eased by falling costs of other lumber materials.

Lumber futures have tumbled from August’s record highs, though they’re still up 26 percent this year. That’s contributed to a volatile year for North America’s lumber industry, with COVID-19 and wildfires causing disruptions amid escalating demand. Do-It-Yourselfers, fortified by government stimulus checks, took on home renovations during pandemic lockdowns as home builders broke ground on an increasing number of new projects.

Elevated wood costs lifted the selling price of an average, new single-family home in the U.S. by $15,841 since mid-April, according to David Logan, director of tax and trade policy analysis for the National Association of Home Builders. Almost a third of that increase — $4,600 — came from higher OSB prices.

“Buyers have become more defensive in recent weeks,” Logan said in an interview. “They’re ordering for very short-term needs, thinking with the fall in plywood prices that OSB prices are likely to follow.”

In Canada, prices of new homes surged in September for the largest monthly jump in 14 years, according to Statistics Canada, with builders citing higher construction costs for the gain. Increased costs for building materials are expected to further fuel rising prices in the short term.

The surge in OSB demand is expected to benefit the few companies that make the material, with Norbord, Louisiana-Pacific Corp., Koch Industries Inc.’s Georgia-Pacific, and Weyerhaeuser accounting for nearly 75 percent of North American production. Norbord is 43% owned by Brookfield Asset Management Inc., one of the world’s largest investors in real estate.

Those companies may benefit from the rally in their upcoming earnings, according to Scotia Capital forest-products analyst Benoit Laprade. Norbord, whose 29 percent market share makes the Toronto-based firm North America’s biggest producer, is expected to report its “best ever” third-quarter results, while Louisiana-Pacific and Weyerhaeuser are also expected to see strong revenue from OSB sales, he said in an interview.

“These record profits will provide those companies with enhanced financial flexibility and the opportunity to return capital to shareholders through reinstatements or increased dividends or share repurchases,” Laprade said.

As the northern hemisphere heads into winter and lumber prices decline, analysts expect OSB prices to follow. Laprade expects some OSB to sell around $410 in the fourth quarter.

“We do see some seasonal slowing in demand but overall if you look at the broad supply-demand dynamics, it’s favorable for all producers,” Kevin Mason, managing director at ERA Forest Products Research, said in an interview. “At the end of the day, the consumer’s going to have to bear the brunt of this.”