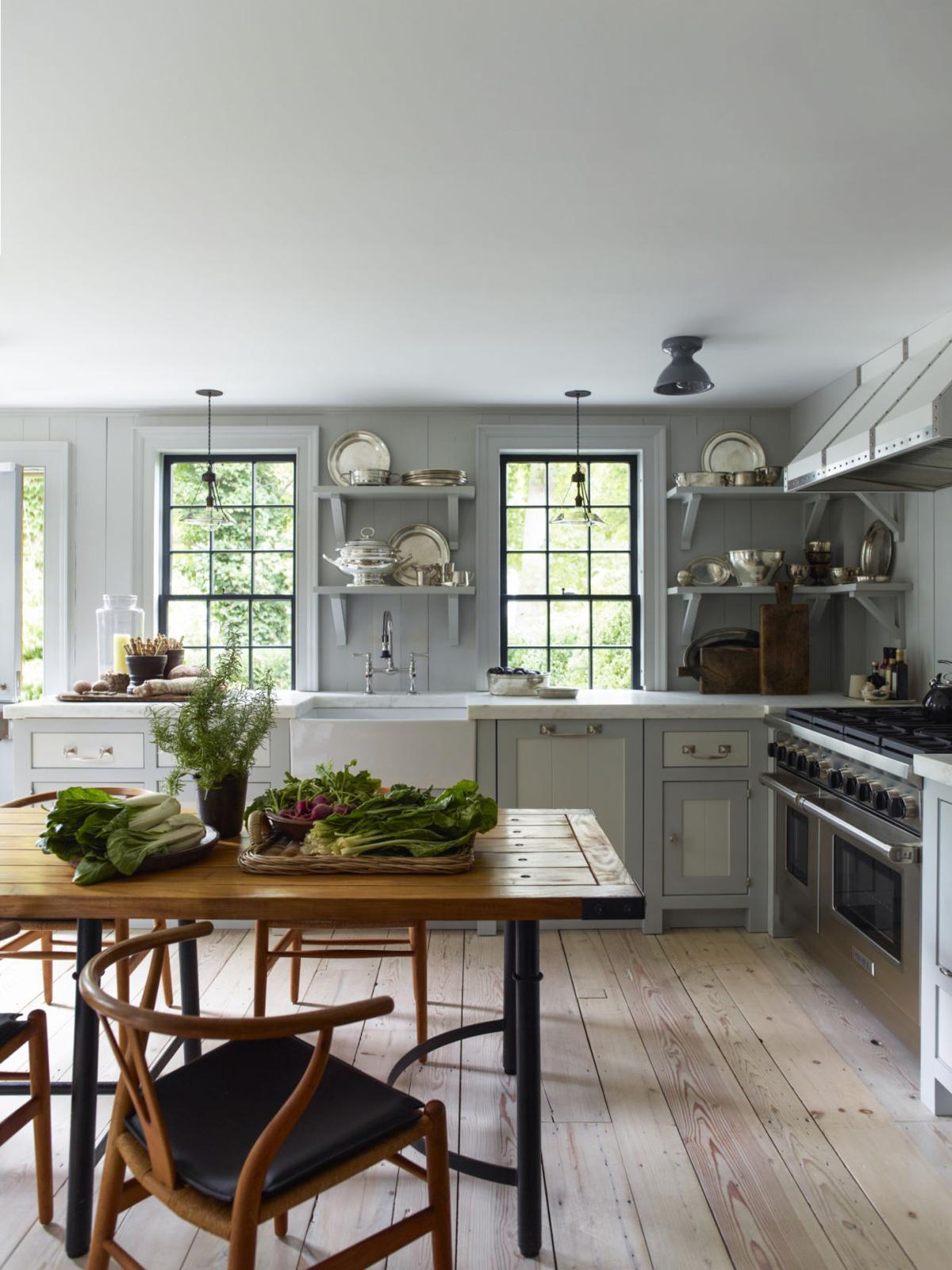 “A table has a domestic warmth to it that an island doesn’t,” Steven Gambrel says. Eric Piasecki/SR Gambrel 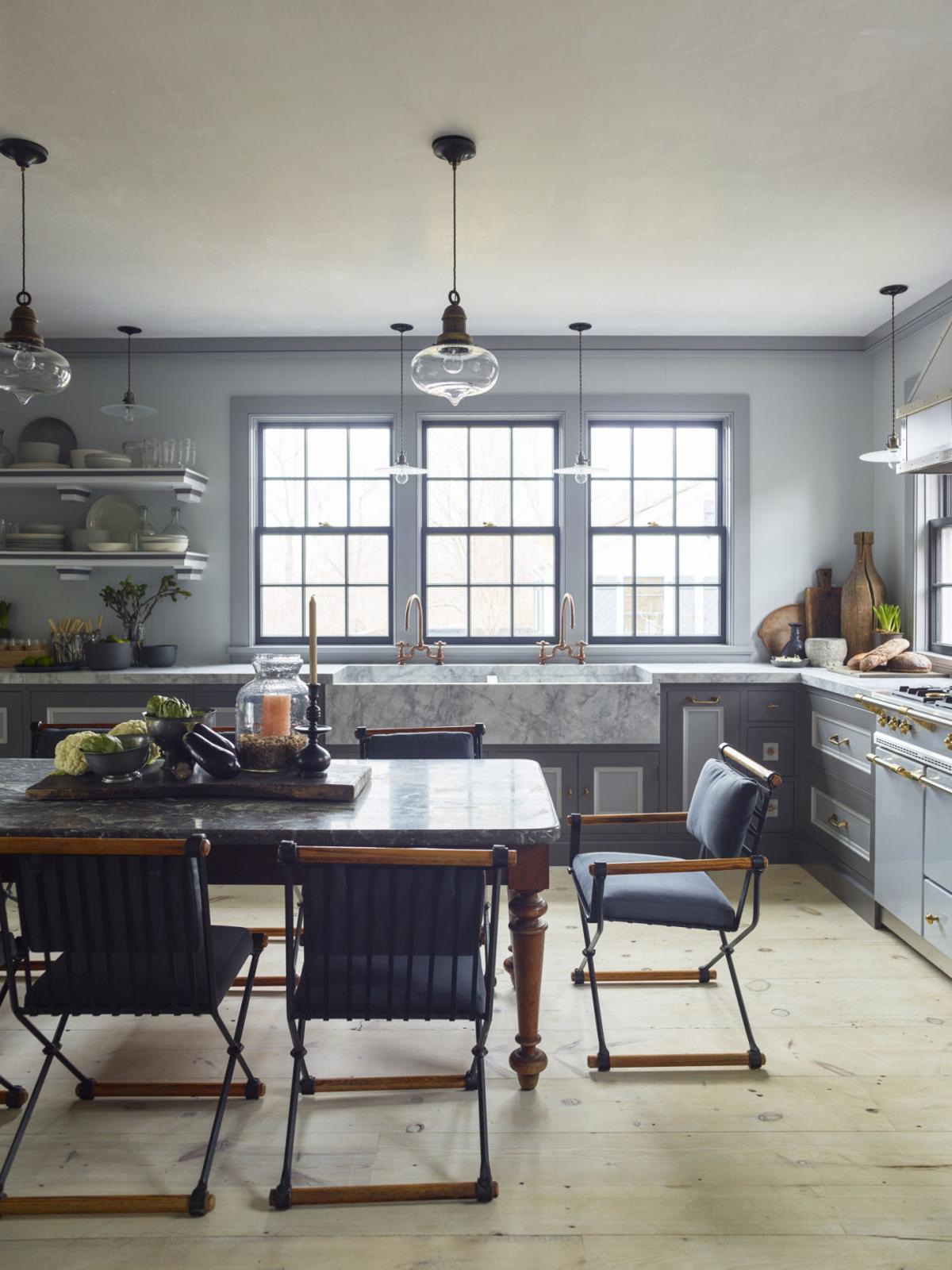 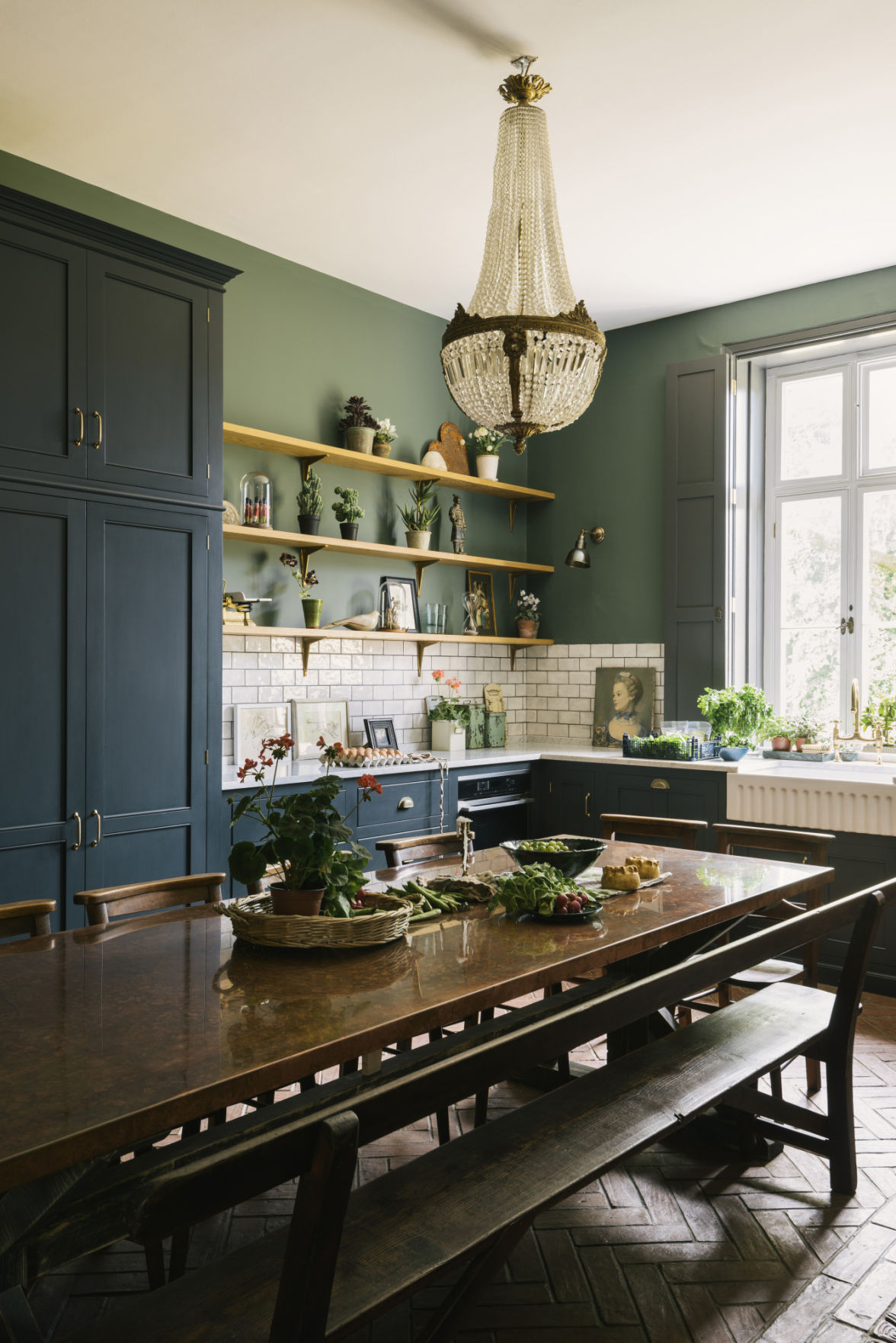 A deVOL kitchen in a Victorian rectory features a handmade, copper-topped table as its centerpiece. DeVOL kitchens start at $40,000. deVOL

“A table has a domestic warmth to it that an island doesn’t,” Steven Gambrel says. Eric Piasecki/SR Gambrel

A deVOL kitchen in a Victorian rectory features a handmade, copper-topped table as its centerpiece. DeVOL kitchens start at $40,000. deVOL

Growing up, there was one place to be after every holiday meal: my grandma’s kitchen table. It was a hub of activity and chatter that went far beyond divvying up leftovers and discussing who should get the last slice of pie. Stories were swapped, highballs were drunk, and cards were played. If a piece of furniture could evoke a sense of family and community, the table was it.

Helen Parker, creative director of deVOL kitchens, has similar warm memories of this once-essential piece of furniture: “My dad would sit at the kitchen table and get out books, or look at stamps and use it as a place to continue hanging out; it was so much more than just a place to eat,” she says.

Lately, a handful of designers and tastemakers are embracing the old-fashioned table as a homier alternative to the ubiquitous island. Cabinetry companies such as deVOL and Plain English have launched U.S. showrooms to an overwhelmingly positive response in the past year, and their advertising often features images of kitchens with tables front and center. The spaces present a cozy and inviting antidote to overly sleek kitchens with tricked-out islands. There’s a reason that “gathered around the island” doesn’t have the same nostalgic ring as “gathered around the table.”

“A table has a domestic warmth to it that an island doesn’t,” says New York interior designer Steven Gambrel. “The way a casual outfit encourages a laid-back vibe and black-tie dress creates a formal tone, the same is true of an island,” he says. “When an island is built-in and matches the cabinets, it has a stiff, immobile presence. It doesn’t have the same sense of ease as a wooden table that’s got some age.”

For Parker, adding a vintage table is a way to create a more authentic, eclectic vibe. “All of those matching parts don’t feel as soulful as when you have great big table with a bunch of flowers where the kids can do their homework,” she says.

Gambrel also cites lightness as a part of a table’s appeal. “Your eye sees under a table because the legs raise it off the ground; it feels more airy and less contrived than an island, which can feel bulky and dated,” he says. Part of the problem in Parker’s opinion is the temptation for homeowners to fit everything and the kitchen sink into the island. “It’s become a big box with too many appliances, stools, and a garbage bin; it ends up not being an aesthetically pleasing piece of furniture,” she says.

But the fully loaded island has a tight grip on America’s imagination. When people talk about the heart of the kitchen today, they’re often referring to this multifunctional monolith. A recent Houzz survey estimated that 38% of kitchen remodels involved adding an island (that doesn’t include all of the homes that already have one). Some trend forecasters even predict that we’ll see a rise in the popularity of double islands in future years.

According to Home Advisor, the average cost of a kitchen island is $3,000 to $5,000, though custom-built options can be $10,000 or more. Of course, not every kitchen can accommodate a built-in island. For older houses with small or galley-style cookspaces, planning for an island involves opening up a wall or bumping out the back, which can increase renovation costs dramatically. In these situations, a small- to medium-size table can be a practical and affordable solution, offering comparable prep space. A solid pine table from Ikea will set you back just $99, while an antiqued elm one with a distressed metal base from Restoration Hardware starts at $1,095. If you’re in the market for a truly unique vintage piece, 1st dibs has an Italian oak farm table with geometric inlay for $4,000.

The earliest islands were humble work tables placed in the center of the kitchen. If you were wealthy, it was where servants orchestrated dinner — think of the downstairs buzz of “Downton Abbey.” If you weren’t, it was where you sat to peel potatoes or roll out pie crust, often in solitude, because the kitchen was probably cut off from the rest of the house. It wasn’t until the mid-20th century that the open kitchen and built-in island arrived, promising to make women’s lives easier.

“The iconic suburban image of the command-post kitchen where the woman of the house could do her work and observe the kids really resonated in 1950s America,” says Sarah Leavitt, curator at the National Building Museum in Washington, D.C. “The idea was to build this concept of family and togetherness right into the actual architecture and design of the house.”

While the island was an aspirational symbol of modern housekeeping, it was mostly a product of postwar new construction for suburban single-family homes. It gained momentum through the 1960s and ’70s but didn’t become a mainstream design element until the 1980s and ’90s, when open-plan kitchens became the rage, buoyed by the popularity of the Food Network and HGTV.

Suddenly, the island wasn’t just a prep space, but also a stage to perform for your guests, though visibility has its drawbacks. “If you have a big island that’s open to the rest of the house and you’re trying to sit in the living room, you’re likely staring at dirty dishes,” Leavitt says. “It looks nice when it’s clean, but given the potential for mess, it’s surprising that it continues to have widespread appeal.”

One irony of the island is that it’s come to epitomize casual living, yet bellying up to one isn’t always easy or comfortable. A counter-height stool often lacks adequate support for longer stretches of sitting. “There’s just something nicer about relaxing into a proper chair and being able to spread out at a table,” Parker says.

Another downside: Breakfast bar-style seating often forces everyone to eat facing the same direction — fine for a quick bite on-the-go, but not exactly great for connecting with one another.

Islands also tend to put guests on one side, leaving the person doing the work standing alone on the other, which can sometimes feel like an imbalance of power. At a communal table, everyone can pull up a chair and occupy equal space.

“It’s a question of, ‘Why does one thing feel good and not the other?’ And it comes down to being honest about the way we actually live vs. the way we think we should live,” Gambrel says.

I needed an incredible knowledge of Kitchens Perth; Ian is aware of what he’s undertaking. We worked well together on my cooking area layout and there is absolutely no way that my home would possibly appearance as great as it will now without the need for his help https://kitchendesignperth.com.au/. Ian thinks outside the container and also has incredible workmanship. Should you prefer to support worthy of spending money on, I would personally strongly recommend his solutions.