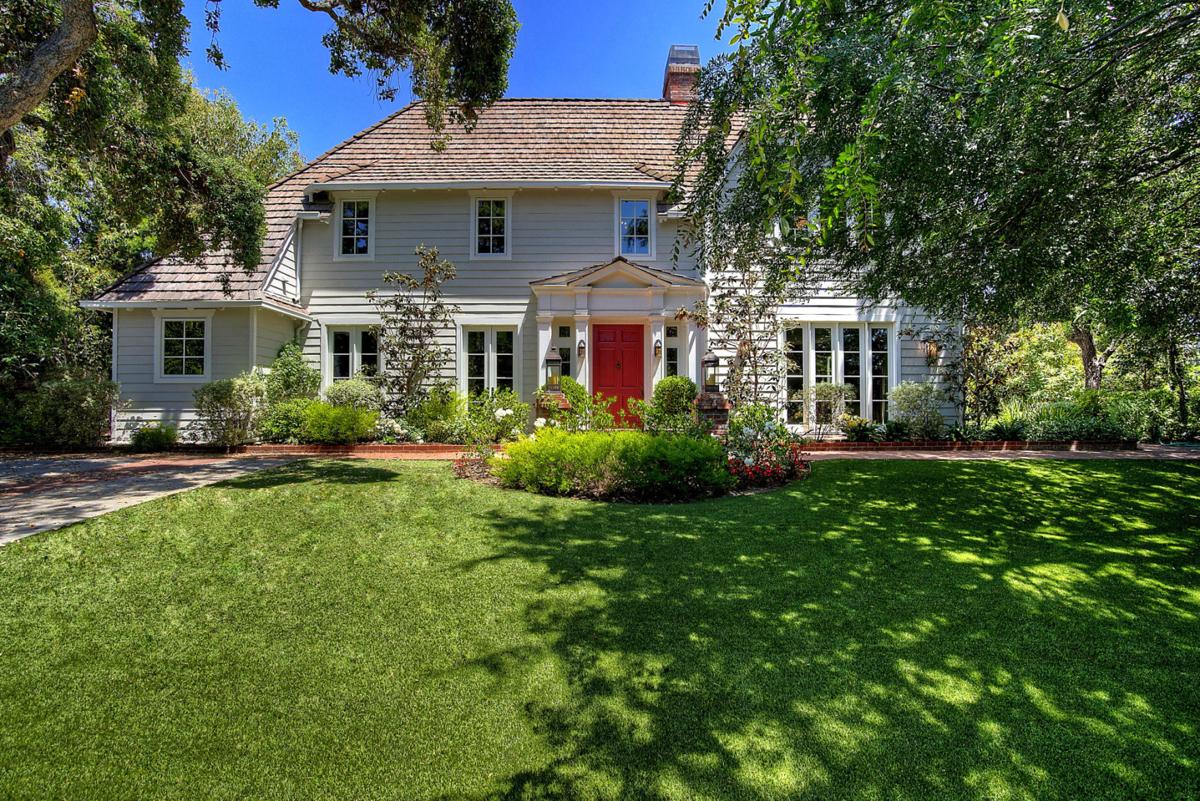 Actor Chris Meloni is asking $6.495 million for his Hollywood Hills home. The charming East Coast-inspired traditional home has been updated, and a classic center hall sits beyond the red-hued front door. Hilton & Hyland/TNS 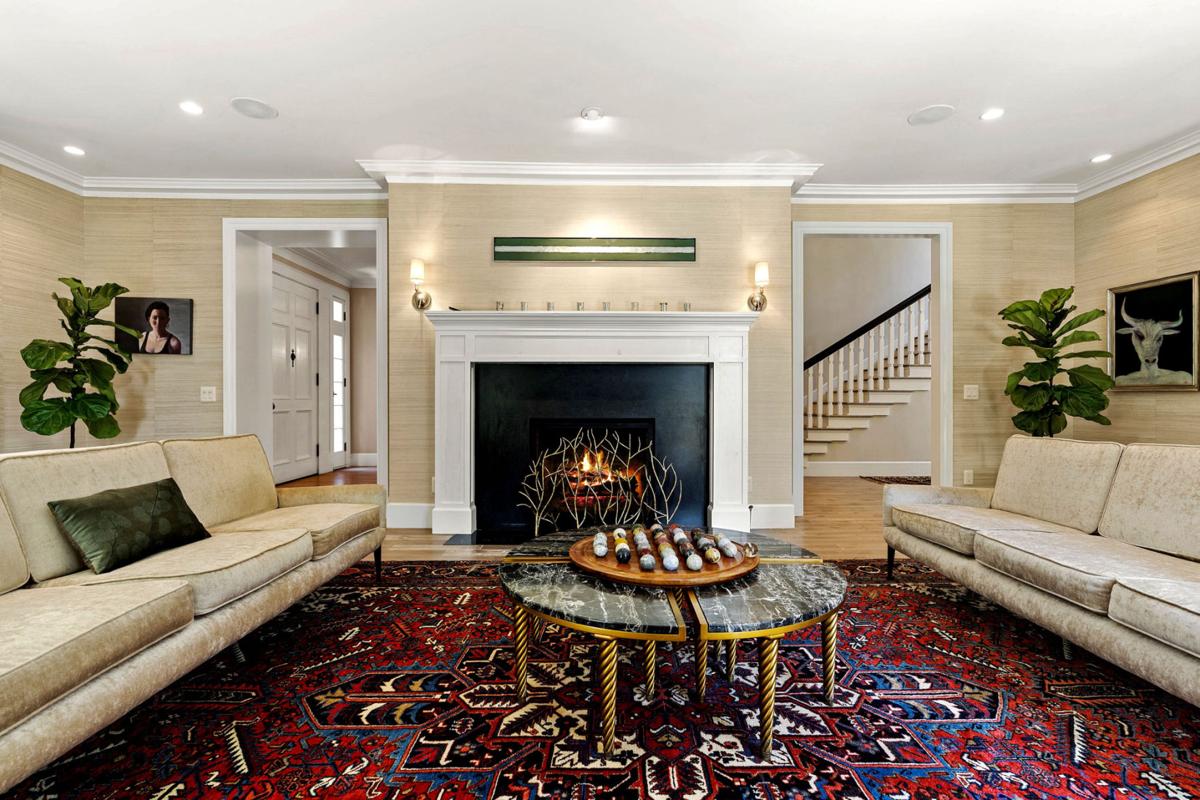 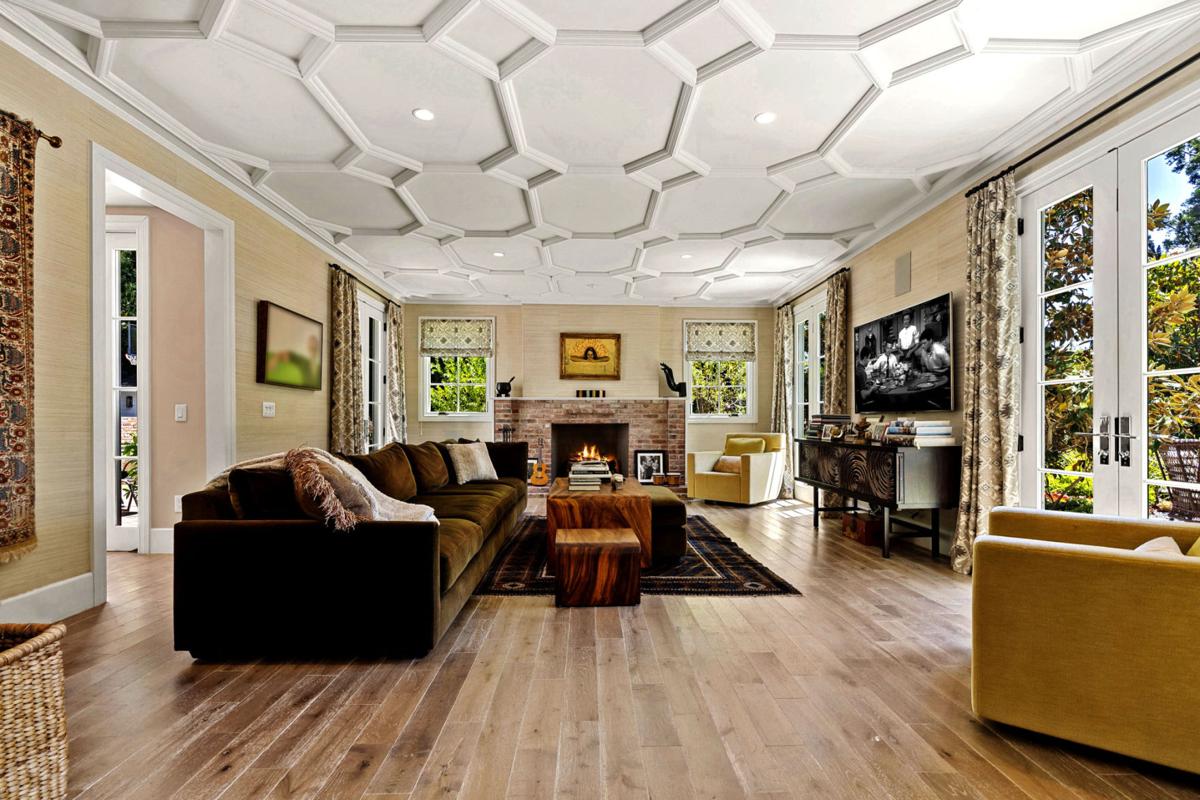 Actor Chris Meloni is asking $6.495 million for his Hollywood Hills home, which was once used as a set for “The Adventures of Ozzie and Harriet.” Hilton & Hyland/TNS 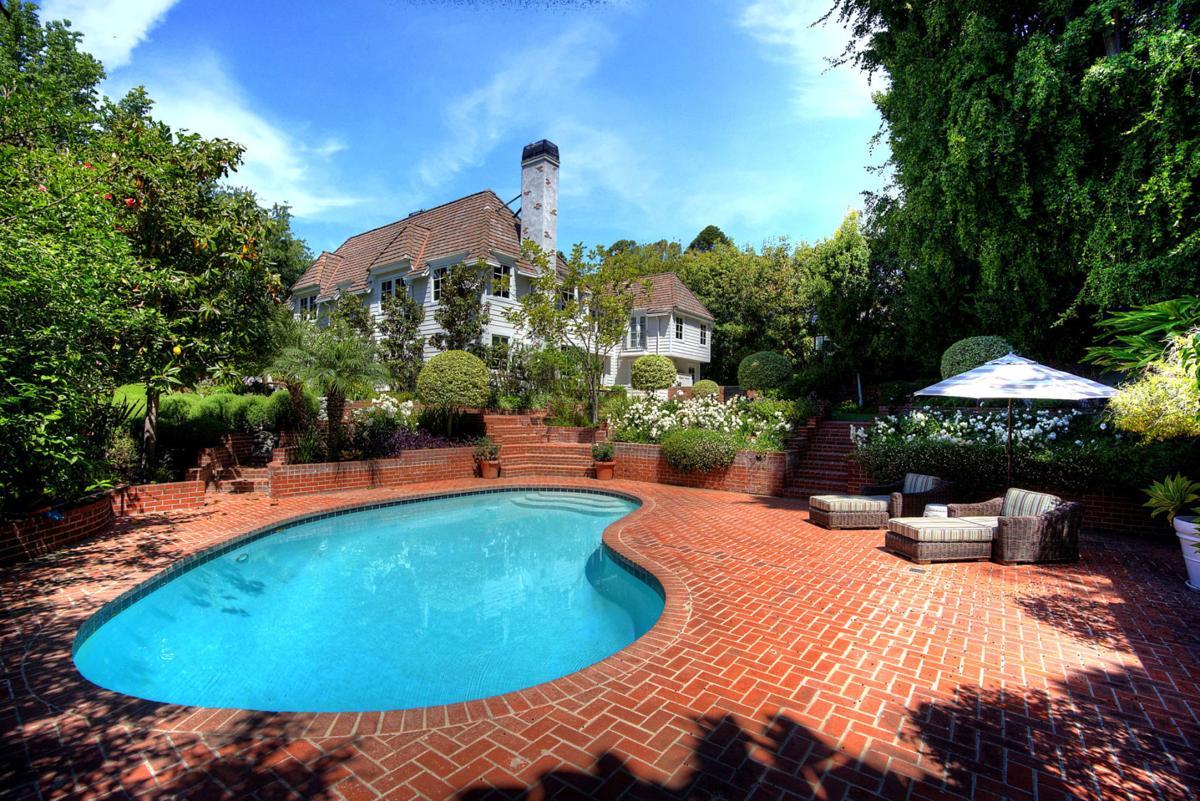 Actor Chris Meloni is asking $6.495 million for his Hollywood Hills home, which was once used as a set for "The Adventures of Ozzie and Harriet." The charming East Coast-inspired traditional home has been updated with delicate wainscoting, textured wall coverings and honeycomb-coffered ceilings. (Hilton & Hyland/TNS) 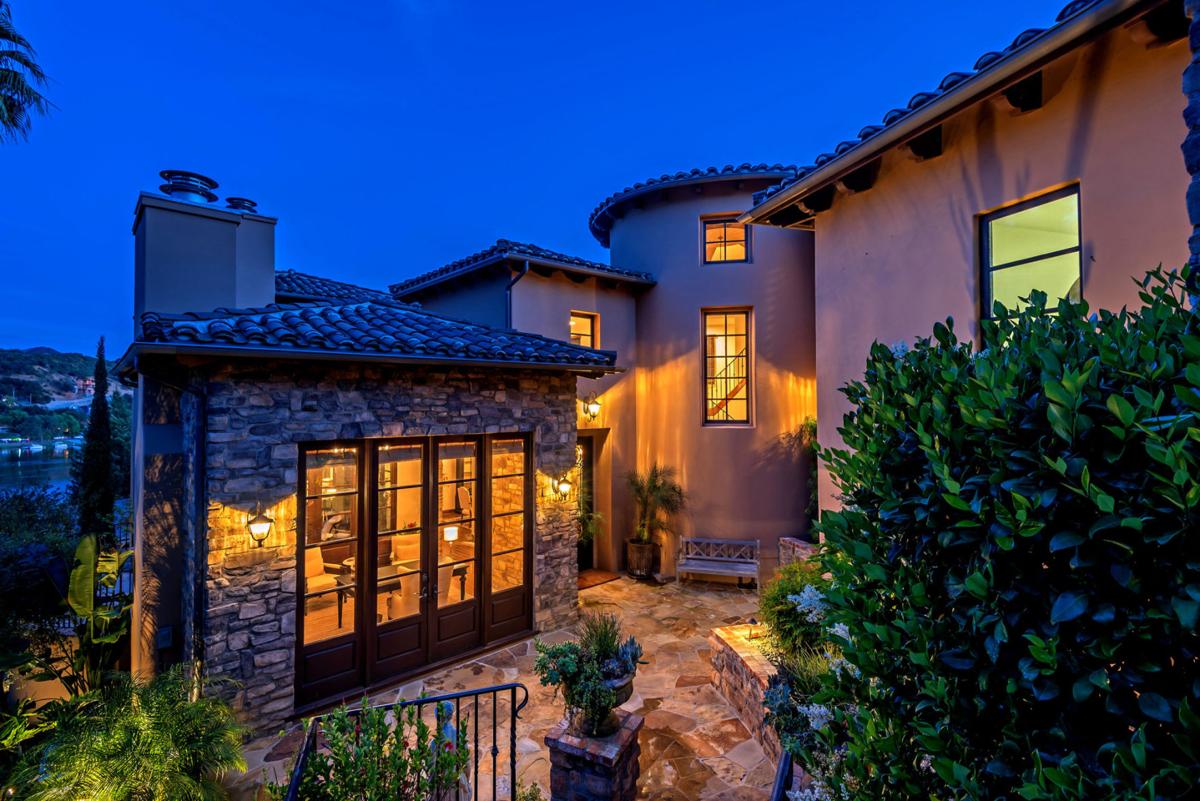 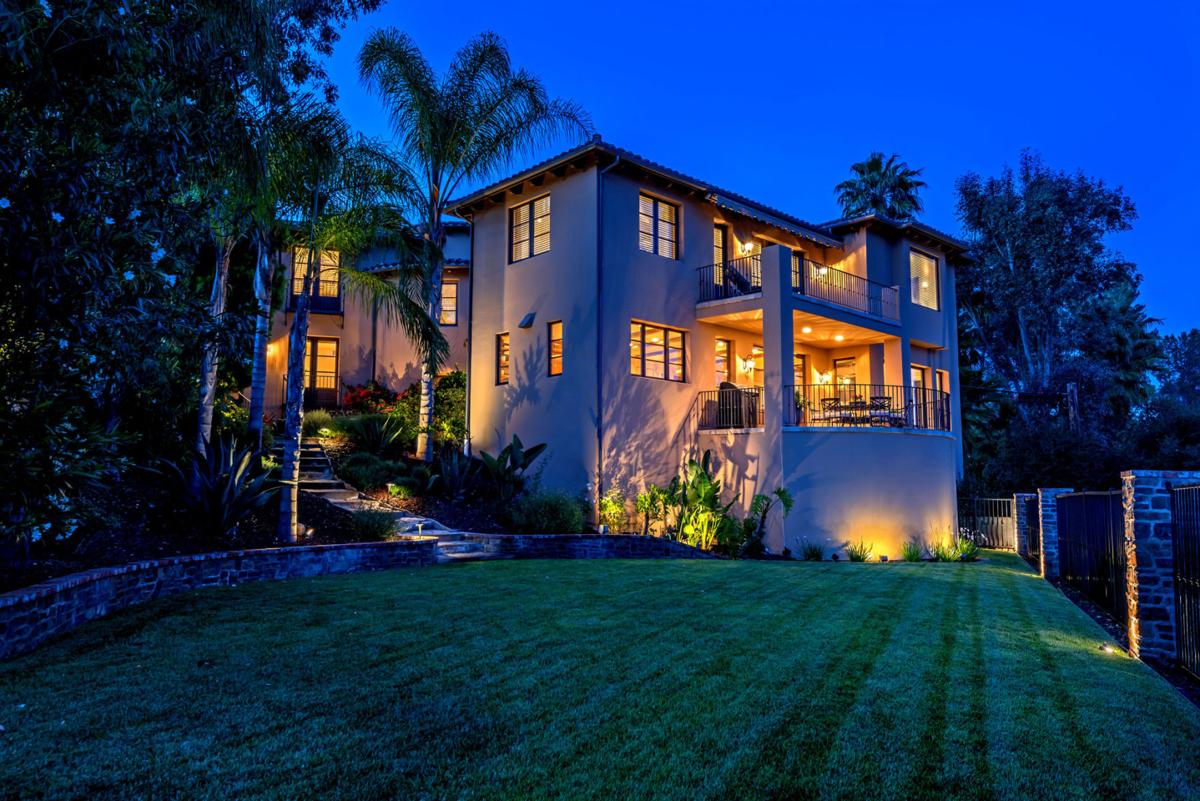 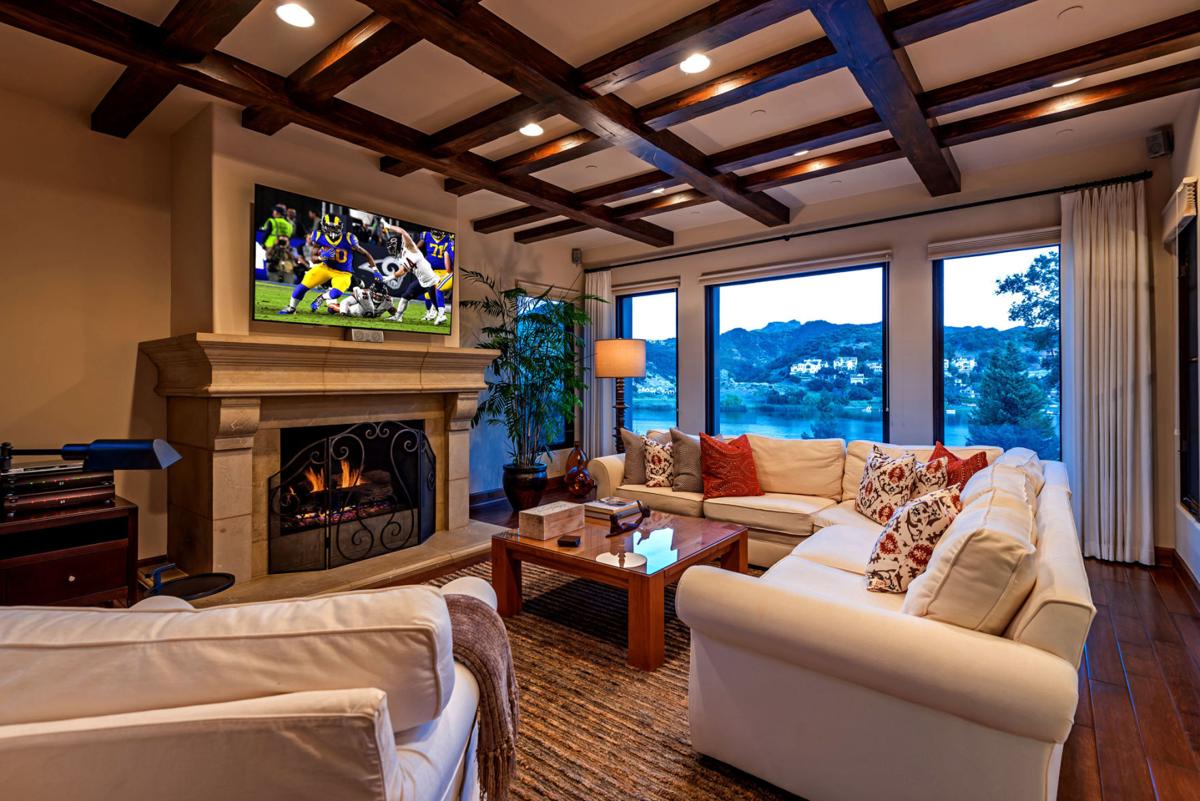 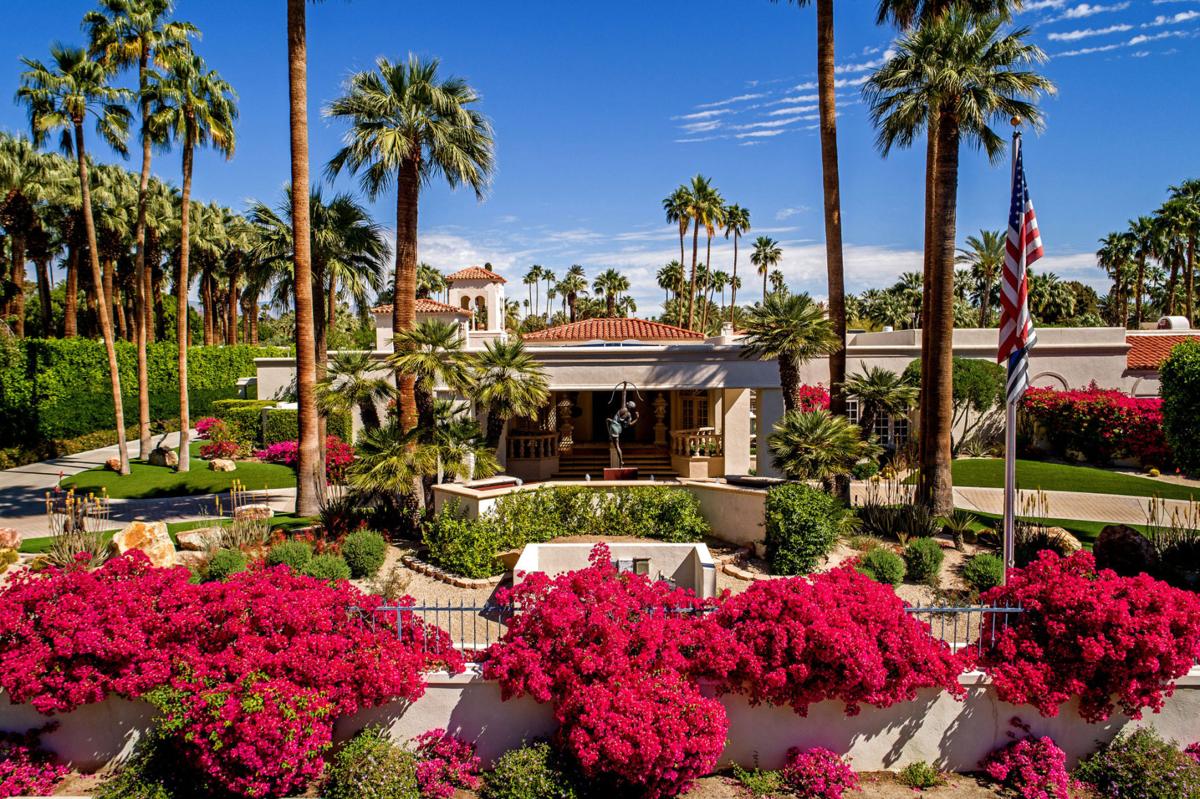 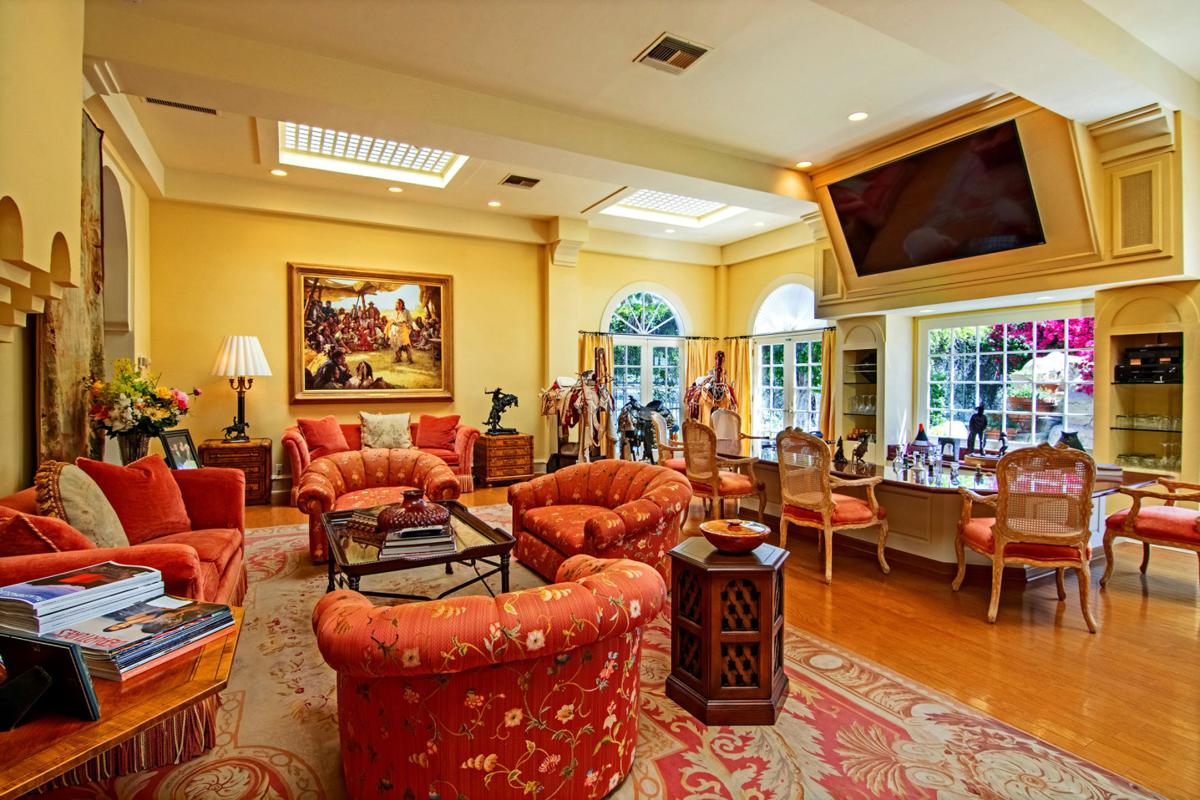 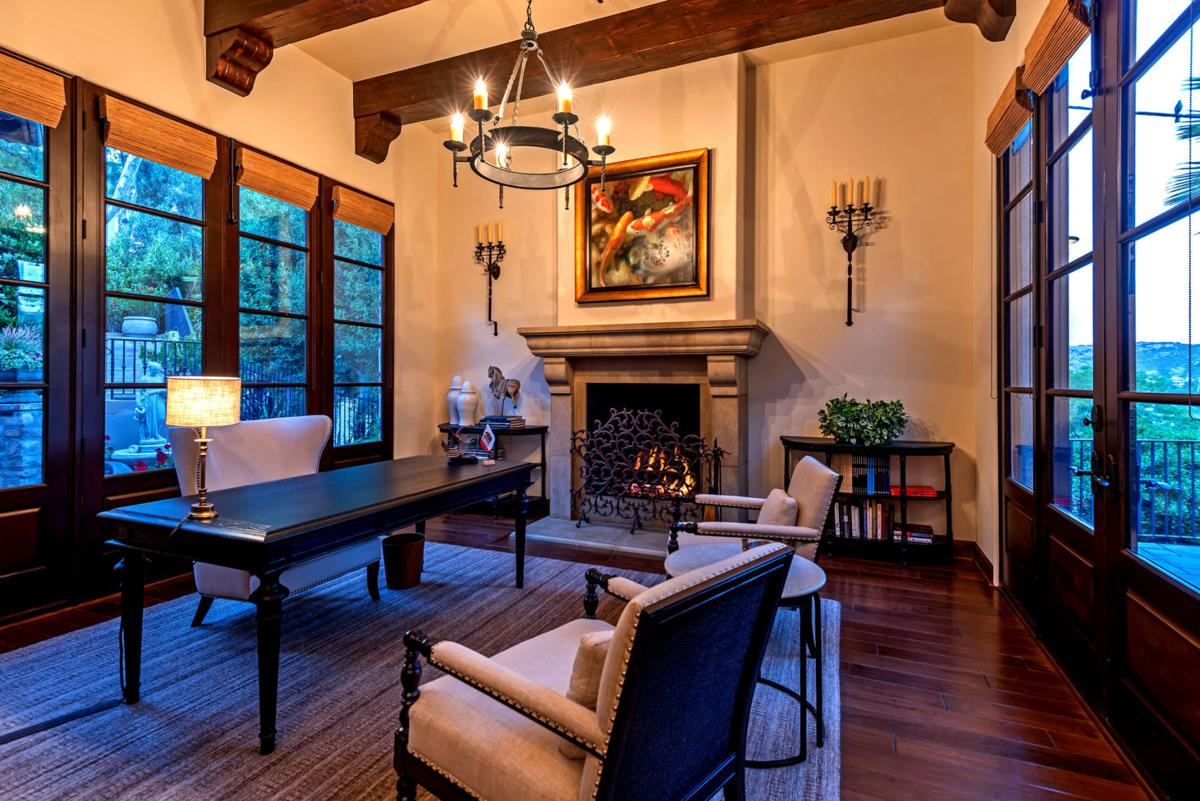 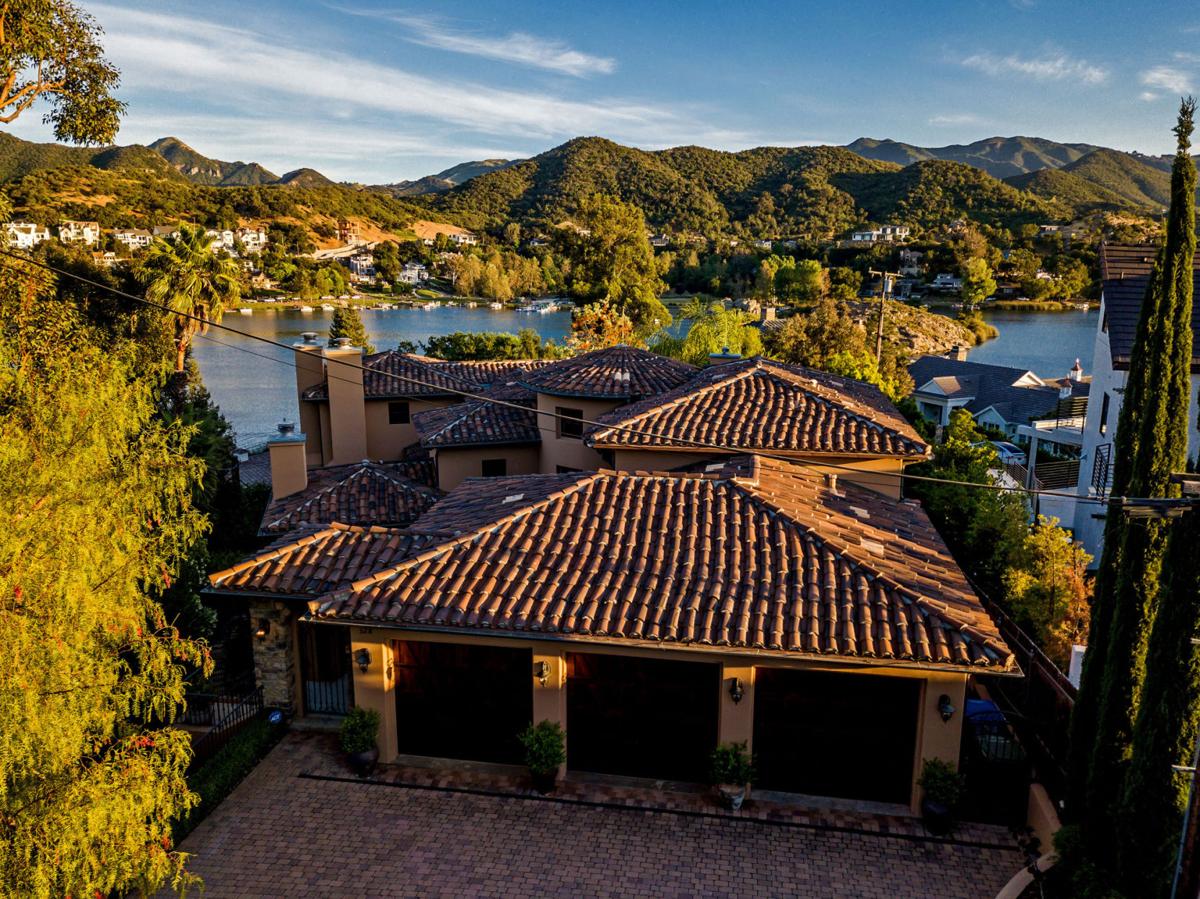 Actor Chris Meloni is asking $6.495 million for his Hollywood Hills home. The charming East Coast-inspired traditional home has been updated, and a classic center hall sits beyond the red-hued front door. Hilton & Hyland/TNS

Actor Chris Meloni is asking $6.495 million for his Hollywood Hills home, which was once used as a set for “The Adventures of Ozzie and Harriet.” Hilton & Hyland/TNS

Actor Chris Meloni is asking $6.495 million for his Hollywood Hills home, which was once used as a set for "The Adventures of Ozzie and Harriet." The charming East Coast-inspired traditional home has been updated with delicate wainscoting, textured wall coverings and honeycomb-coffered ceilings. (Hilton & Hyland/TNS)

LOS ANGELES — Actor Christopher Meloni, who will soon be back on the case in an upcoming “Law & Order” spinoff, has put his home in the Hollywood Hills on the market for $6.495 million.

Television viewers may be familiar with the East Coast-inspired home, which doubled as a set for “The Adventures of Ozzie and Harriet” in the 1950s and 1960s.

Meloni bought the place six years ago and has updated the interiors while retaining a wealth of character details. Delicate wainscoting, textured wall coverings, French doors and three fireplaces are among features of note. A classic center hall sits beyond the red-hued front door.

The house, built in 1916, sits on just shy of half an acre with brick patios, lawn and a kidney-shaped swimming pool. A charming guest house, designed to evoke the main residence, sits next to the pool area.

Meloni, 59, previously appeared as Elliot Stabler on the long-running show “Law & Order: Special Victims Unit” before leaving at the end of its 12th season. Since then, the actor has appeared on “True Blood” and “Veep” as well as in the films “42” and “Man of Steel.”

TUNING ONE UP IN LAKE SHERWOOD

KISS lead guitarist Tommy Thayer has put his home in the Lake Sherwood community of Ventura County on the market for $2.75 million.

The custom Mediterranean home, built in 2005, was remodeled and upgraded after Thayer purchased the place in 2008.

Designed to maximize the scenery, the multilevel house features six patios including one with an outdoor fireplace. Picture windows in the common areas bring views of the lake and mountains inside.

Reached through a gated courtyard entry, the 4,497-square-foot house holds a gallery, a center-island kitchen, four bedrooms and five bathrooms. Box beam ceilings top the family room, which has one of five fireplaces. A loft/bonus room caps the top floor.

The house rests on about a third of an acre with lawn and formal landscaping. A three-car garage sits off the front.

Thayer, 59, worked in various capacities for KISS in the 1990s before replacing Ace Frehley as the rock band’s lead guitarist in 2002. He is credited on multiple albums and co-wrote 10 songs for the band’s 2012 album “Monster”

LETTING GO OF THAT COUNTRY FEEL

Grammy-winning singer and songwriter Kelly Clarkson is on the move in Encino, where her home is on the market for $9.995 million.

Mixing farmhouse and contemporary styles, the roughly 9,800-square-foot mansion stands out from the crowd with distressed wood siding and a metal roof. A chandelier-topped entry gives way to formal living spaces and a chef’s kitchen with three islands. Features include a wine cellar and a home theater.

A second-story master suite complete with a dressing room and a fireplace leads the list of eight bedrooms and 11 bathrooms. Expansive balconies across the upper level create additional living space outdoors.

The house, built in 2018, sits on about half an acre with a covered patio, a swimming pool and a sunken lounge. An outdoor kitchen comes equipped with a pizza oven.

Clarkson, 38, became a television sensation in 2002 when she won the inaugural season of the singing competition series “American Idol.” Since then, she has gone on to release eight studio albums, including the Grammy-winning records “Breakaway” (2006) and “Stronger” (2011).

She bought the gated estate two years ago for $8.25 million.

NBA veteran David West is making moves in retirement, listing an Oakland home he owns in a limited liability company for $3.675 million. That’s just $125,000 more than he paid for it back in 2017, a month after winning his first of two championships with the Golden State Warriors.

The multilevel home descends down its hillside lot in a gated community, taking in sweeping views of the San Francisco Bay. Past a tan exterior, the 6,000-square-foot floor plan boasts bright, modern living spaces with white walls and hardwood floors.

Walnut cabinetry and marble waterfall countertops accent the eat-in kitchen, and other highlights include step-down living and family rooms, a wine cellar and an office.

Upstairs, the master suite, one of five bedrooms, expands to a massive marble bathroom and private terrace. Two more terraces hang off the back of the home, and a front-facing balcony overlooks the neighborhood.

A native of New Jersey, West was named national college player of the year at Xavier University before embarking on a 15-year NBA career. He was twice named an All-Star with the Hornets and spent stints with the Pacers and Spurs before finishing his career with the Warriors, with whom he won back-to-back championships (2017, 2018).

“Rancho Autry,” the Palm Springs estate of late cowboy crooner Gene Autry, has sold for $7 million — the most paid for a home in Palm Springs this year.

Not only is the deal a 2020 high, the sale ranks as one of the priciest in the city’s history. Other blockbuster deals include the $13 million sale of Bob Hope’s Modernist mansion and the $7.7 million sale of the Elrod House.

Set on an acre and a half in Old Las Palmas, the gated mansion spans 13,400 square feet and also includes a guest apartment, a tennis court and a glass mosaic swimming pool set among gardens, palm trees and drought-tolerant landscaping.

Entered via porte-cochere, the main home holds seven bedrooms, 7.5 bathrooms and five fireplaces spread across a single story. Hardwood floors, arched doorways, skylights and coffered ceilings adorn the common spaces, which include a green-and-yellow kitchen and a spacious living room.

Outside, the 1920s home wraps around a central courtyard complete with loggias, lounges, a pool, spa and mountain views. A three-car garage, plus the original one-car garage, complete the property.

The ranch was of many properties that Autry and his wife, Jackie, bought throughout Southern California. In addition to owning the Angels baseball team for 36 years, their other holdings included a TV station, multiple radio stations, a Palm Springs hotel, a Midcentury condo and an Encino mansion that later sold to “Survivor” host Jeff Probst.