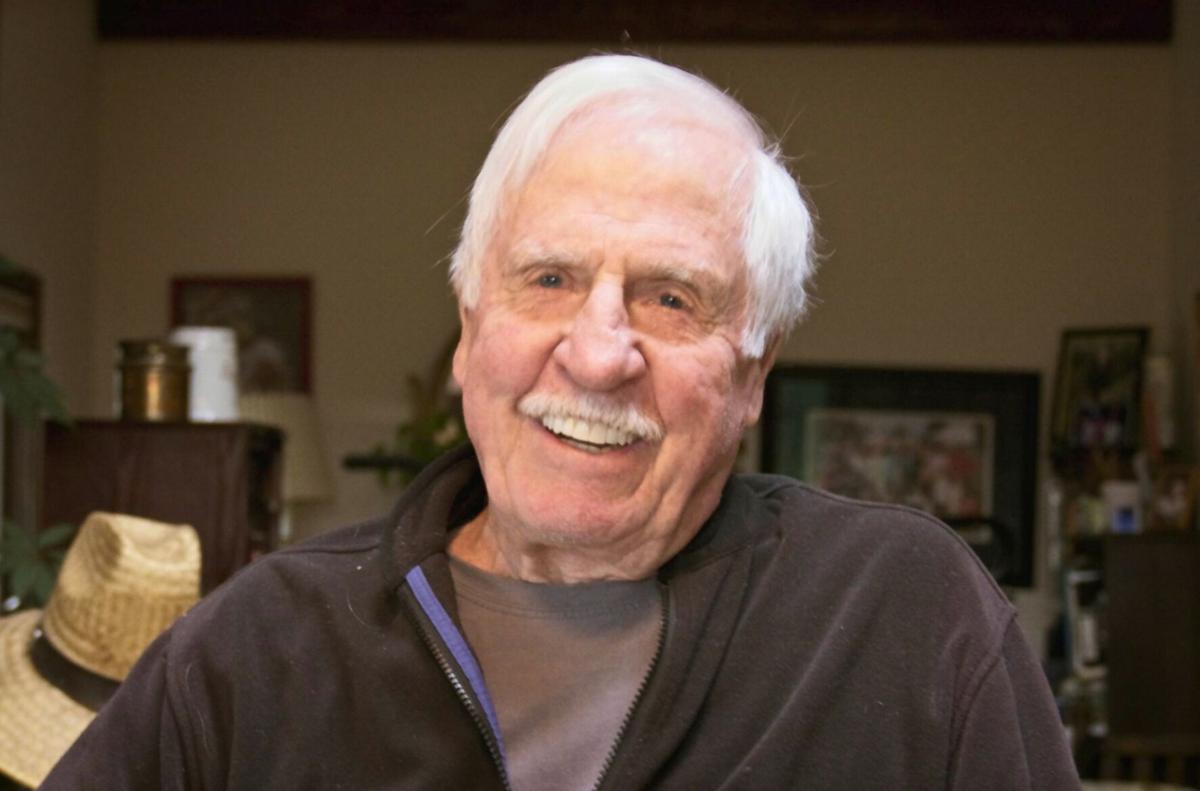 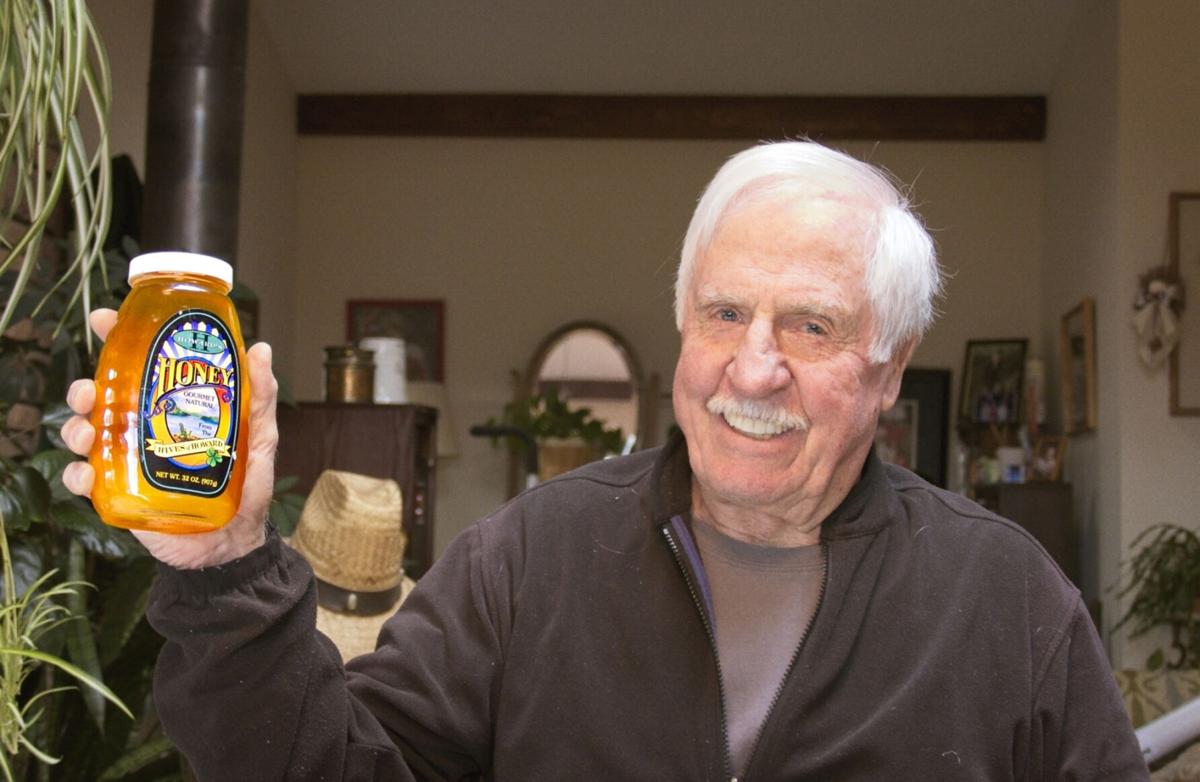 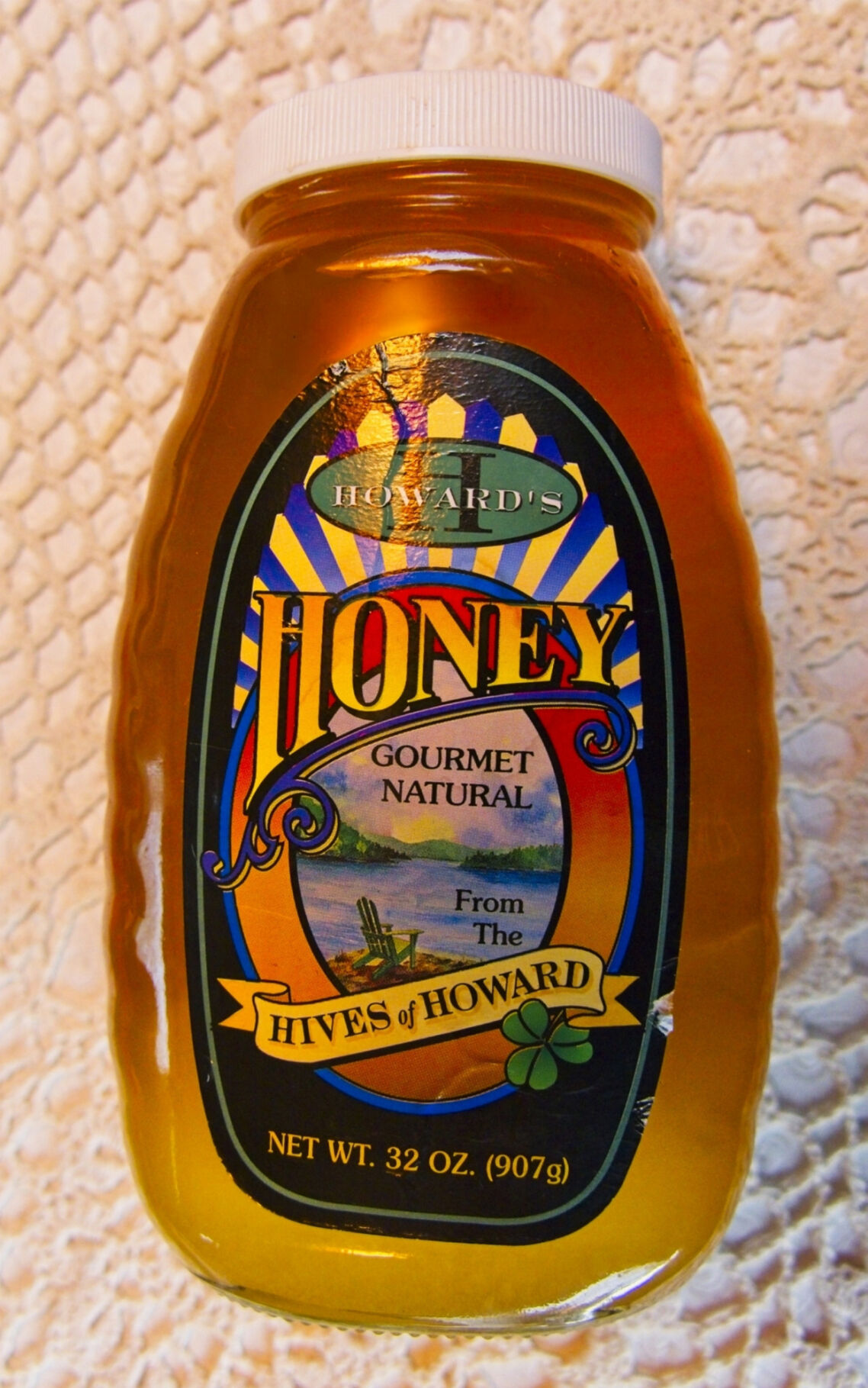 OSWEGO — To bee or not to bee may not exactly be the question, but if it has to do with bees, Jim Howard probably has the answer.

The 88-year-old Oswegonian beekeeper, still in shape after years as SUNY Oswego’s wrestling coach, fell into his life’s fondest hobby little by little starting back in the ‘80s, surprised that his Californian sister was raising a few bees.

Whether it was sibling rivalry or love at first sight, Howard came back east and decided he’d give it a try with two hives.

“We weren’t really beekeepers,” he said in a recent interview, “we were honey takers. We took the honey. We watched the bees. We didn’t really know a lot about it.”

That certainly changed. As his interest grew, and slightly before he retired, he went to a couple bee conferences and began to understand more, “and all of a sudden, I’m a big-time beekeeper.”

Still though, for Howard, bees are a pastime.

And a nice business it is, with about 300 gallons of honey in his basement, Howard sells the sweet stuff in jars and small bear bottles.

He’s one of an estimated 25 to 35 beekeepers in Oswego County. They meet above the library in Mexico monthly. Oswego County Beekeepers they’re called. But Howard also seems to know beekeepers around the country. And between the beekeeping friends he’s made, the conferences he’s attended, and the magazines he’s read, he’s become somewhat of a walking beekeeping encyclopedia.

But that, he says, is thanks to modern science.

“The bee industry, the honey industry, only in the last 15 to 20 years has had scientists that are actually interested in what’s going on with them,” he said. “When you think back, bees have been here thousands of years, and the agricultural people have relied on them for thousands of years. But a lot of that was just happenstance. Whoever did what, passed it onto somebody else. But now we have actual scientists researching, doing studies, and the whole world of bees is changing.

“The bees are better than they were. When we had this thing called colony collapse disorder, which is really just a combination of a lot of diseases that overwhelm the bees, all of a sudden, the scientists started breaking the bee and the honey world down and doing some excellent research. We’ve only had that in the last 15 to 20 years.”

After all the bees and beekeeping has gone through over the past few years, how are the bees doing?

“I think they’re doing quite well,” Howard said. “I’m down to 18 hives, and this is the most honey we’ve had per hive in a long, long, long time. My cellar’s stocked full of really good honey. And this is encouraging because we’ve had so much trouble and so many diseases. The scientists are just getting a handle on all this stuff. It’s hard to treat bees with any type of chemicals, just because of the way they operate within that hive.

“It’s gotten better,” he continued, “because it got the beekeepers to pay more attention to the little things that help the bees stay healthy. Before that, we just did some things because other beekeepers before us did it. But now we have a reason that we do things. I think we try to keep our bees happy. All my hives right now are happy bees. We combined two hives the other day. One was not going to make it through the winter because it was too small in numbers, not enough honey in storage for the winter, so we put two hives together. So now, instead of losing them both, they should get through the winter. Then we took another hive of small proportion that probably’s not going to make it through the winter, but instead of combining them, we put them side by side in the same box with a wall between them so they can’t get at each other, because one queen will kill the other. So, the beekeepers are getting smarter, wiser because we’ve got good scientists giving us good information on how possibly to maintain healthy bees.”

Those two hives side by side “will be warm for sure, because that heat will transfer back and forth. And we took honey from other hives, excess honey, and stocked both of those hives side by side with plenty of storage. So, they’re not going to starve. They’ve got enough to last through the winter. Now it’s whether the bees themselves are healthy enough to withstand the long, cold winter of Oswego, New York.”

There are 122 kinds of honey bee, Howard said. “We have mostly Italian honey bees. They seem to do well in the frozen north.

“We wrap our hives with insulation,” he continued. “We put burlap inside the hive up on the top to absorb the moisture. One drop of cold water kills a bee automatically. And that’s just one example of the little things you do to keep bees alive in Oswego, New York in the winter.”

Disease, though, is an ever-present possibility.

“You can’t read whether the bees have a disease or not,” Howard said. “It’s just impossible to read. So, you don’t really know how healthy they are. You watch their actions. You try to give them the right ingredients of food, etc., to make sure they get through this winter. In some cases, it’s a calculated risk. Like combining the hives. It’s a calculated risk. Will it work? I don’t know. We’ll see.”

When it doesn’t work, when the bees are found to be diseased, that’s when Howard finds it tough.

“We get rid of the ones that are really, really sick,” he said. “And that’s what you do. You burn the whole hive, bees and all. The hardest thing you have to do is burn 50,000 bees. But you have to do it. Otherwise, you’re spreading the disease among your own colonies. You get the honey off it, burn bees and all, and you start over the next year with a new hive, new bees, and try to keep other diseases away from those bees. I’m pretty fortunate because where my hives are, at a big orchard, I’m not influenced by other bees from other beekeepers, that I know of. Bees fly three miles as the crow flies, straight, and of course, on one side of us we’ve got the lake, so that cuts off a whole lot of questions of whether other bees are influencing your bees.”

“For the most part, I don’t want grumpy bees,” he said. “If I have a hive of bees that are grumpy, I get rid of them. So, our bees are pretty calm most of the time. Most of our honey bees are very docile. They’re easy to tend. When I get stung, it’s 99% my fault. I put my hand on a bee when I wasn’t looking, or I moved it to the side of the frame. I get stung sometimes on my hands, I don’t even realize I’m getting stung because I get stung so much, but I have zero arthritis because of that. The bee sting somehow neutralizes it. They actually sting MS (multiple sclerosis) patients to help them survive and help them with their chronic problem.”

Medical science, he said, is “evaluating what is actually in the venom and what this can do to help MS patients, but they’re not there yet. It’s not a regular treatment, but some day it may be.”

“They know us by our pheromones, our smell,” Howard said. “And they know some of us who are in there all the time by our voice. They recognize me because I’m loud. They’re fun to be with if you have happy bees. And like I said, I have all happy bees. As long as I don’t do something to mess it up, they’re very happy.”

Yet, honey bees only live around 56 days, according to Howard. And they can’t fly once the temperature gets below 40. “They can make a swift flight out and back in (to the hive),” Howard said.

The queen continues to lay eggs up until the first of December, then doesn’t lay any more until into February. For the most part, the winter bee doesn’t go outside. It just moves its abdomen and creates heat. Yet that little motion by thousands of bees really adds up.

“The hive maintains a temperature, even in the cold, blustery winters of Oswego, New York, of somewhere around 85 to 95 degrees inside,” Howard said.

Professional beekeepers can have hundreds or even thousands of hives. And they’ve turned the bees’ services into an industry.

“Some beekeepers pollinate for a price,” Howard said. “Usually, the price is like $65 a hive. You put those hives usually downwind from the orchard. The bees actually like to fly into the wind. So, they help pollinate whatever the crop is, whether it’s pears, or apples, or in some cases, blueberries. New England’s big on blueberries. Then they pick them up after that pollination period is over and move on. Some will leave them and store them in a particular place.”

This can sometimes have serious, unfortunate consequences. Howard told of one beekeeper who 20 years ago left 1,000 to 2,000 hives stored southwest of Pulaski and was going to pick them up later. They were diseased and as a result, wiped out numerous beekeepers’ hives in the area. “I’m glad I wasn’t close enough to where those bees didn’t influence mine,” Howard said.

Howard knows of another beekeeper with thousands of hives who loads up three tractor-trailers with them and drives to California where the almonds grow. All the really big beekeepers head to California, Howard said. The almonds need the bees.

Howard’s bees are in an orchard by the lake. They make their honey from what they collect off the apple and peach blossoms and off of the blueberries there. And then there’s the goldenrod.

The bees’ honey is “influenced by where they get their sweeteners from,” Howard said. “We’re in a big apple, peaches, blueberry orchard, so our honey is influenced by that orchard. Goldenrod in the fall is a honey producer. When the bees are processing the goldenrod, it’s the worst smell in the world. You wonder how the hell can I get something nice and sweet like honey from the terrible smell that the bees are making processing? But it creates good honey. But you wouldn’t think so if you were around that hive in the fall when they’re processing ripe goldenrod.”

But locating his hives in a nearby orchard is a two-way street for Howard.

“The whole idea of having our bees in that orchard is to help the guy pollinate,” he said.

It is a symbiosis that seems to fit Jim Howard well. He takes care of the bees, and the bees seem to take care of him. And though he definitely knows more about bees than anyone I’ve ever known, that old college coach’s mind is still open to more.

“Every time I’m in the hive I learn something new,” he said. And somehow, I’m sure he does.