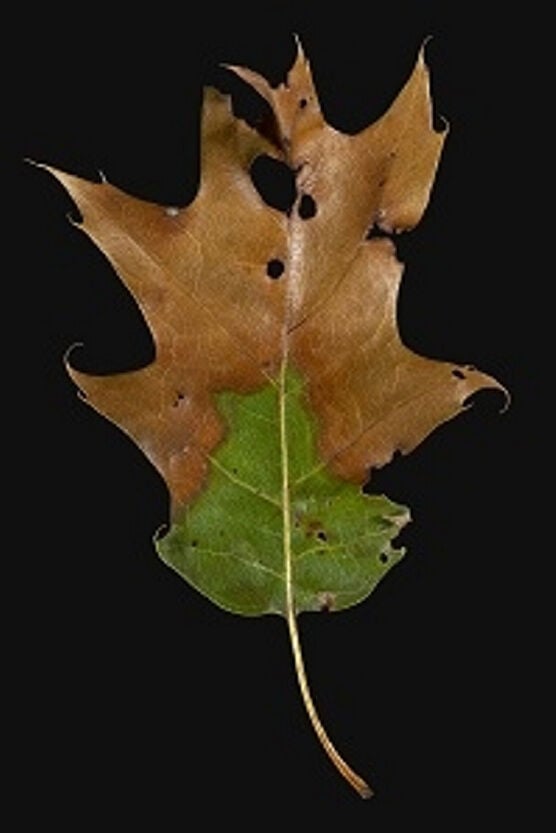 Evidence of oak wilt can be seen on this leaf 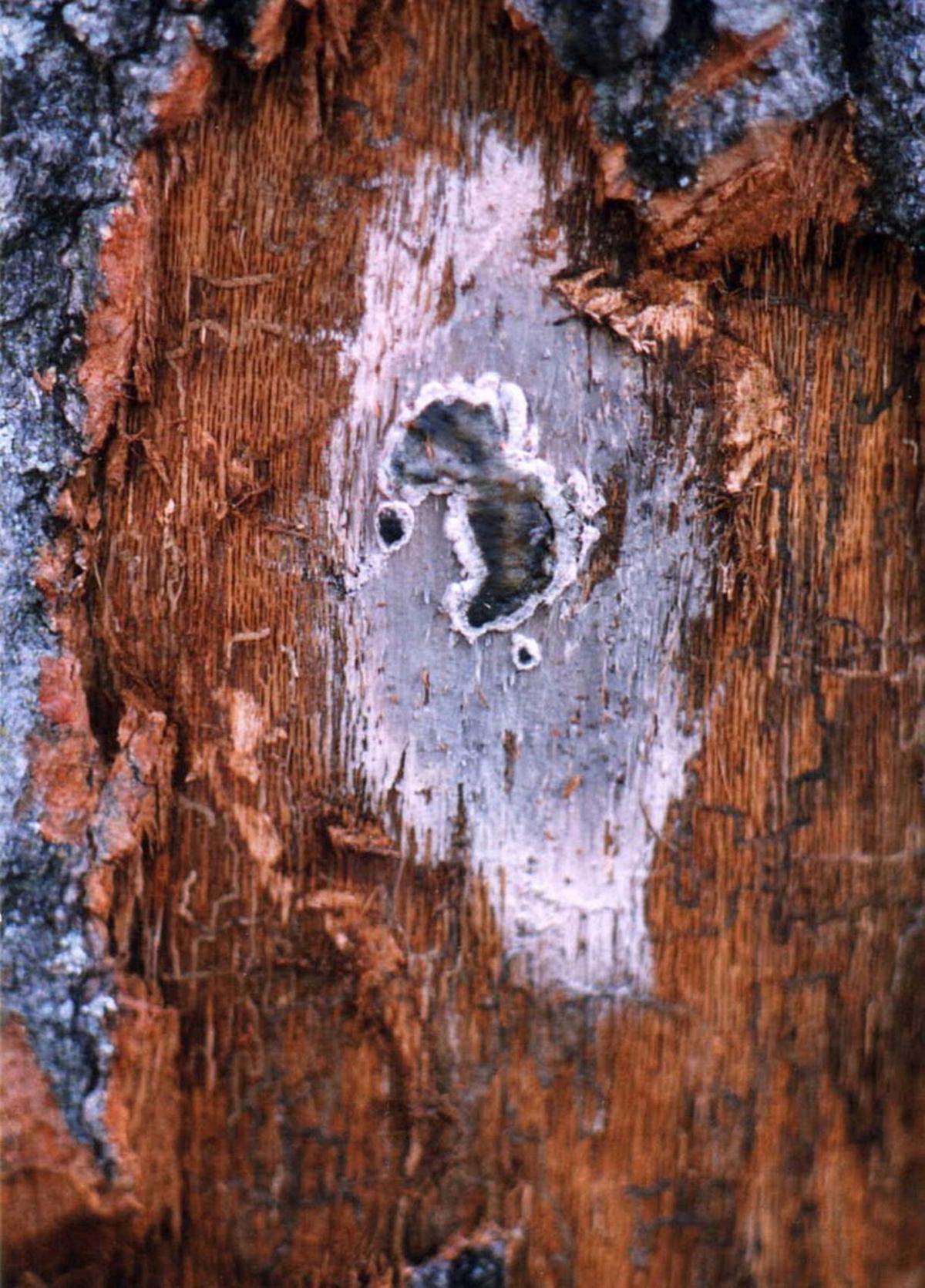 In the center of this oak’s trunk lies a spore mat at the Infectious stage. Wikipedia

Evidence of oak wilt can be seen on this leaf

In the center of this oak’s trunk lies a spore mat at the Infectious stage. Wikipedia

It’s normal to tune out all the Chicken Littles (such as yours truly) who run around squawking about this or that invasive forest pest or disease that pose a threat to trees. I mean, how many times can the sky fall, anyway? But the real danger is when we feel so overwhelmed that we throw up our hands. Thinking we can’t make a difference could result in more harm to forests than the pests themselves.

There’s a pithy fable about a child who rescues starfish from the beach after storms, and some busybody informs the kid that they can’t save all the starfish. The child responds by hurling another starfish into the sea and quips “yeah but I saved that one.” Right now we have the chance to help save oaks from a devastating new disease, not by tossing them in the ocean, but by adopting some painless and cost-free practices when pruning or harvesting oaks.

Oak wilt (Bretziella fagacearum), a virulent pathogen first identified in 1944 in Wisconsin, has moved into New York state with a vengeance, mainly in the past decade. This disease, which is of unknown origin, will turn a lush, healthy red oak to a crispy critter in just two weeks. Tree pathogens don’t get much nastier than that — I suppose if it also caused oaks to burst into flames, that would be worse.

Oak wilt spreads through root grafts as well as spore transfer. Underground tree-to-tree spread, while an important pathway near active outbreaks, is less important than airborne transmission. This latter route is where we come in.

Healthy red, black, pin, scarlet, and other “red-type” oaks succumb in a matter of weeks, while “white-type” oaks such as bur and swamp-white oaks don’t bite the dust so spectacularly, taking a year or two to die. After a red-type oak is killed, the pathogen makes mycelial spore pads under the bark, causing small bark splits. A spore-laden ooze, reported to smell like Juicy Fruit gum, is secreted, which attracts insects, the most significant of which are sap beetles in the family Nitidulidae.

Nitidulid beetles feed on sugars from the sapwood of newly cut or wounded hardwoods. Normally, not a problem, unless the beetles have recently wallowed in disease spores at an oak-wilt spore pad. Though spore pads develop only on red-type oaks, all oaks can be infected by a spore-covered beetle if it finds a fresh wound during the beetles’ flight season.

So here’s the big news: Paint is your friend.

From April 1 to July 1, the risk of spreading oak wilt is extreme, and from July to Sept. 30 it’s moderate. Any exposed fresh wound on an oak, whether a stump after a tree removal or a pruning wound, puts them at risk. Rule One is never to cut oaks, or allow them to be accidentally wounded, from March through September. OK, now stop laughing — that’s not a rule.

Although it would be ideal not to prune or harvest oaks all spring and summer, it’s impossible. The work-around is to paint each wound or stump immediately after cutting. Spray paint is easiest, but it can be any cheap, leftover exterior product — whatever you have. But use it right away, as nitidulid beetles can find fresh oak sap in under an hour. On pruning wounds, paint the whole thing (Having spent years trying to convince people not to paint wounds, this is hard for me as an arborist). With stumps, only the sapwood needs to be covered.

It would be fair to ask why a stump should be painted. It’s because depending on how many root grafts are interconnected with that stump, spores deposited on a cut stump could infect many nearby oaks through grafts — roots extend three times the branch length.

Painting oak stumps and pruning wounds between March 1 and Sept. 30 must become standard practice in the forestry, utility-clearing, and tree-care industries, But Jane Q. and John Q. Public have a role to play as well. Demand this practice from any arborist you hire, and put it in the contract if you have a woodlot harvested. If there are oaks in your landscape that you prune yourself, follow the same guidelines.

Oak wilt is not hundreds of miles away from us. It’s as close as the first idiot who brings firewood home from visiting his buddy whose dead tree he helped cut up. (History shows that most such idiots are guys; hence the gender exclusion.) Don’t move firewood long distances!! Here is our chance to hold a very important line. Implementing these strategies will vastly reduce the risk of seeing oaks go the way of the American chestnut. Let’s do our part to prove Chicken Little wrong.

If you suspect oak wilt, please report it to your nearest state Department of Environmental Conservation office. See: wdt.me/forest_facts for more information.

Q: A squirrel left a gift, growing out near the foundation of my house: a black walnut sapling, which I rescued. It’s an offshoot from a nearby giant black walnut tree. It was growing on the north side at an odd angle, and I dug it out, with the walnut still attached to its base. It is still twisty, so I put it up against a stick, hoping it’ll go straight.

It’s been OK for like 3 weeks so far, but was wondering what I should do in the fall? Plant in yard and hope for the best, or bring the container inside and plant in the spring or latter?

A reader in Watertown

A: Probably the best thing is to allow it to get established in the container, and then transplant it to a corner of your garden (or other weed-free bed you prepare) in mid-September. It’s a good idea to somehow protect it now, and upon transplanting, to place hardware cloth on the soil surface around it because squirrels will still dig it up to eat what’s left of the original nut.

Paul Hetzler has been an ISA-certified arborist since 1996 and is a member of NYS Arborists and the Society of American Foresters. Contact him at paul.j.hetzler@gmail.com.