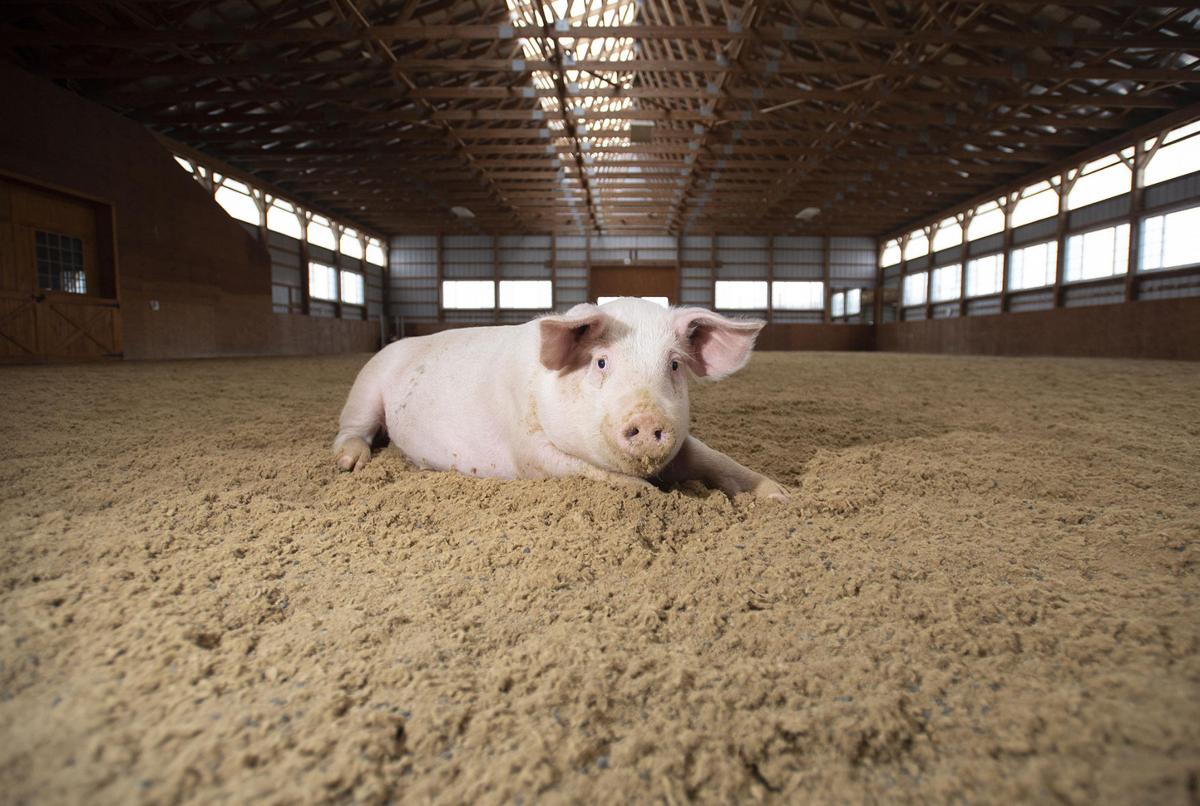 Nemo rests in the Thunderhead Farms arena. Nemo escaped from a delivery truck at the nearby Billig farm and ran off before the fire started that killed all that farm’s hogs. Rick Kintzel/Morning Call 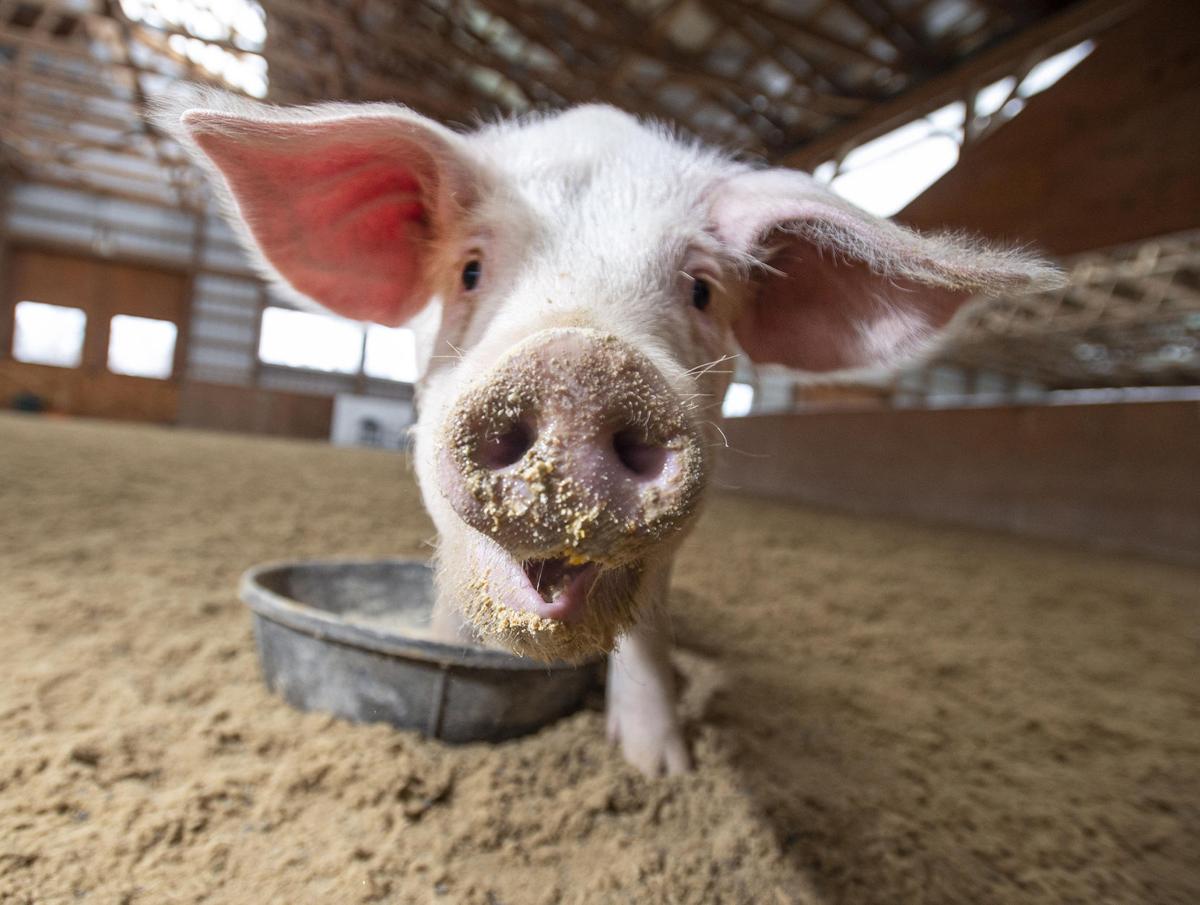 Nemo, the last surviving pig from a fire on a Lynn Township farm that killed 4,000 animals, walks around the arena Tuesday, Oct. 22, 2019 at Thunderhead Farms in Lynn Township, Pa. (Rick Kintzel/The Morning Call/TNS) 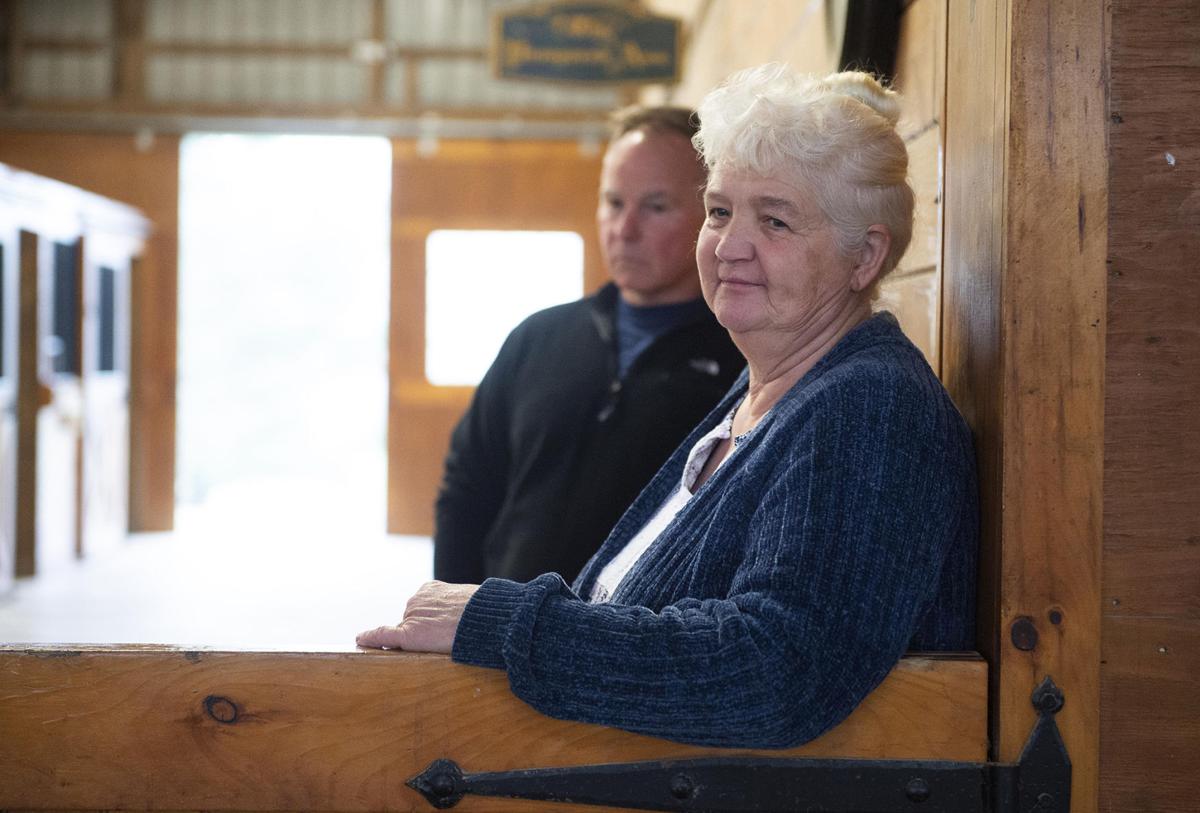 Teresa Billig, owner of the hog farm where 4,000 animals were killedin a fire a month ago, watches as her lone surviving pig, Nemo, eats grapes at Thunderhead Farms in Lynn Township, Pa. Rick Kintzel/Morning Call

Nemo rests in the Thunderhead Farms arena. Nemo escaped from a delivery truck at the nearby Billig farm and ran off before the fire started that killed all that farm’s hogs. Rick Kintzel/Morning Call

Nemo, the last surviving pig from a fire on a Lynn Township farm that killed 4,000 animals, walks around the arena Tuesday, Oct. 22, 2019 at Thunderhead Farms in Lynn Township, Pa. (Rick Kintzel/The Morning Call/TNS)

Teresa Billig, owner of the hog farm where 4,000 animals were killedin a fire a month ago, watches as her lone surviving pig, Nemo, eats grapes at Thunderhead Farms in Lynn Township, Pa. Rick Kintzel/Morning Call

When the little pig darted off the delivery truck and high-tailed it into the woods behind Teresa Billig’s hog farm, she worried he’d be killed.

Packs of coyotes, some as big as German shepherds, roam the woods around Billig Farm, the 113-acre Lynn Township, Pa., property the family has worked for four generations. Standing on her porch in the early September nights after the pig escaped, Billig fretted at the sound of coyotes howling and yapping as they hunted in the corn and soybean fields behind her home.

Within weeks, Billig, 62, would have far more than one runaway pig to worry about.

A devastating fire raced through Billig Farm on Sept. 21, destroying two barns and killing every hog the family owned, more than 4,600 animals. After weeks of searching for a cause, state police declared the investigation into the fire closed, said Trooper Nathan T. Branosky, and the origin of the blaze “undetermined.”

For Billig and her husband, Tim, who run the farm with their two sons, George and Daniel (a third son, Timothy, died as a child from leukemia), the fire was the worst in a series of financial disasters that affected the family in recent years.

Like many farmers, Teresa Billig said recently, they were already having trouble paying their bills, in part because of the ongoing China-U.S. trade war that drove customers to cheaper pork suppliers. In danger of losing their home, the Billigs filed for bankruptcy in June, a move Teresa Billig said allowed the family to catch up on bank payments.

“It was just a terrible time,” she said.

Billig wept softly as she talked about the fire. She described working with the same mother pigs for years in the barn’s gestation room, caring for them as they nursed up to two litters of piglets each year.

“I called them my girls,” she said, crying. “It still hurts.”

As they went about the grim task of burying the dead hogs and cleaning away scorched wood, the Billigs would occasionally catch sight of the runaway pig, trotting around the edges of the farm and rooting in the garden. Each time they’d approach the 5-month-old animal, whom Teresa Billig started calling “Mr. Pig,” he’d scamper back into the woods.

At nearby Thunderhead Farm, stable owners Steve and Meredith Prange were also being visited by a small pig. Meredith Prange first noticed a pair of pointed white ears sticking out from a patch of tall grass.

Pretty soon the pig, who had swelled from his 50-pound escape weight to more than 120 pounds in a few weeks, probably from helping himself to several neighbors’ gardens, was a frequent visitor at the Prange’s farm. They nicknamed him “Nemo” and tried to lure him inside the massive indoor arena where they hold dressage shows and train their eight horses, but he ran off each time.

“He didn’t seem afraid. We’d get pretty close to him. Then he’d just take off,” Meredith Prange said.

Other farm owners reported similar sightings. Pretty soon, the whole neighborhood was obsessed with catching the little pig. Folks would gather in each other’s yards and share sightings on Facebook. It went on for weeks.

“This is a very intelligent animal,” said Nicole Grzelak, who owns a nearby horse farm with her husband, Andrei Chivvis. “You can see it in his eyes.”

In a sprawling farm community where your closest neighbor, geographically, can be more than a mile away, friendships can take a long time to form. Despite living near Billig Farm for 20 years, Meredith Prange only knew Teresa Billig well enough to wave hello as they drove past each other on Springhouse Road.

Brought together by their shared desire to catch the pig, the women became close friends in recent weeks, laughing as they tromped through a muddy stream after the elusive animal, who, again and again, let them get close then darted away.

“That was the one amazing thing about all of this,” Meredith Prange said. “I didn’t know my neighbors before. Now we’re all friends.”

Teresa Billig said the pig search, and her newfound friendship with Prange and other neighbors, is the one good thing that’s happened to her family. She said she was overwhelmed by their willingness to help find her pig and by the support the Billigs have received from other people in the community, including those who’ve started a GoFundMe campaign to help the family pay bills.

“I can’t tell you how grateful we are,” she said, crying again.

It was Sydney Markowicz, an 18-year-old horse handler at Thunderhead Farm, who finally corralled Mr. Pig. Using, of all things, a picnic cooler and a whiteboard that was leaning up against the side of the horse arena, she kept him contained against a barn long enough for the Pranges to gather several neighbors, who walked, as a group, around the pig, nudging him into the arena.

After a night in a bed of comfy sawdust, Mr. Pig seemed to be in a good mood. As neighbors who’d followed the search stopped by to get a look at the wayward pig, he rolled on his back, allowing people to rub his belly and feed him grapes.

The Billigs decided long before he was caught that Mr. Pig would not be headed to the slaughterhouse. At Meredith Prange’s suggestion, they reached out to Logan’s Heroes, an East Greenville animal sanctuary that already has several potbellied pigs. The sanctuary’s owner was scheduled to pick up Mr. Pig.

“He deserves a happy life,” Teresa Billig said. “He made it. He’s the one who got away.”