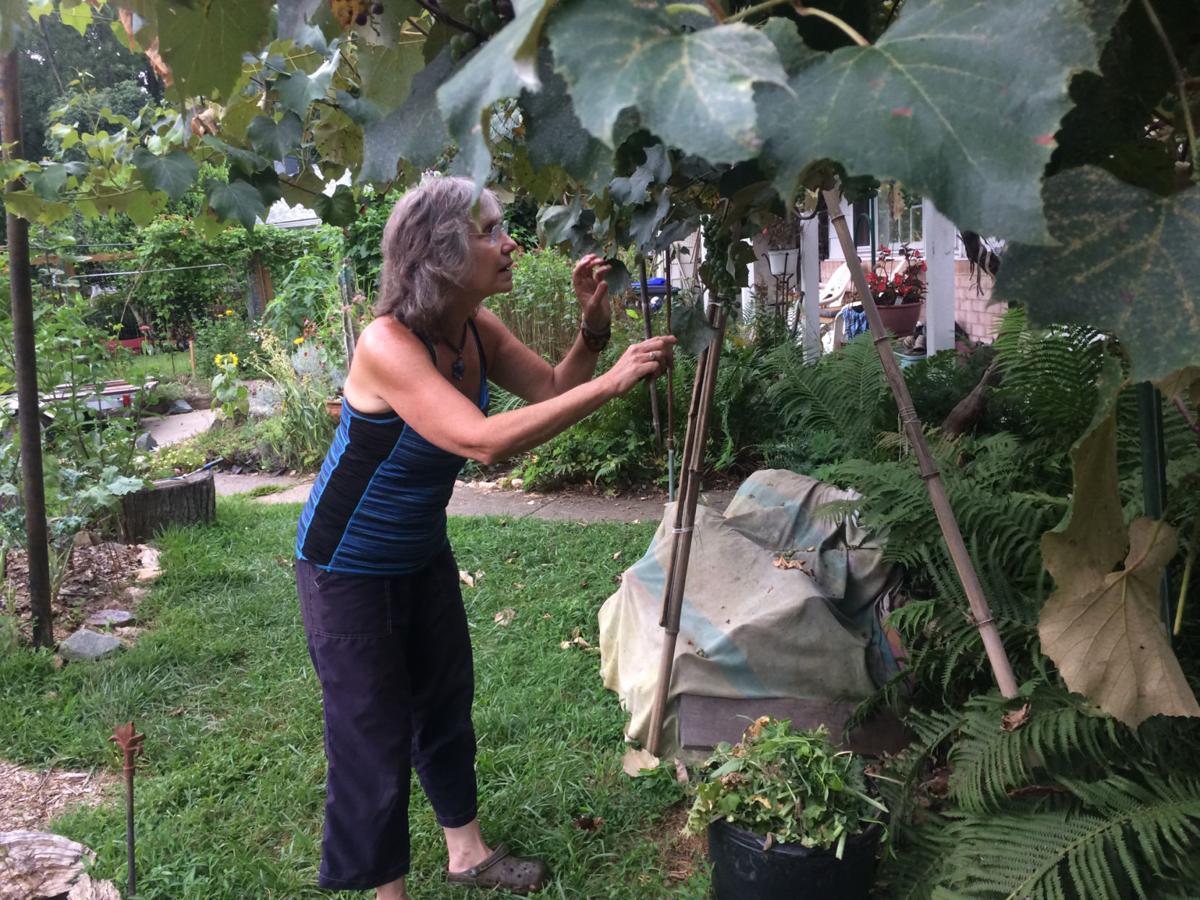 Susan Eisendrath’s farm garden was once a typical grass lawn under the shadow of a big old silver maple. Now it is now an assortment of raised growing beds, mulched paths and fruiting vines attached to various structures. Adrian Higgins/Washington Post 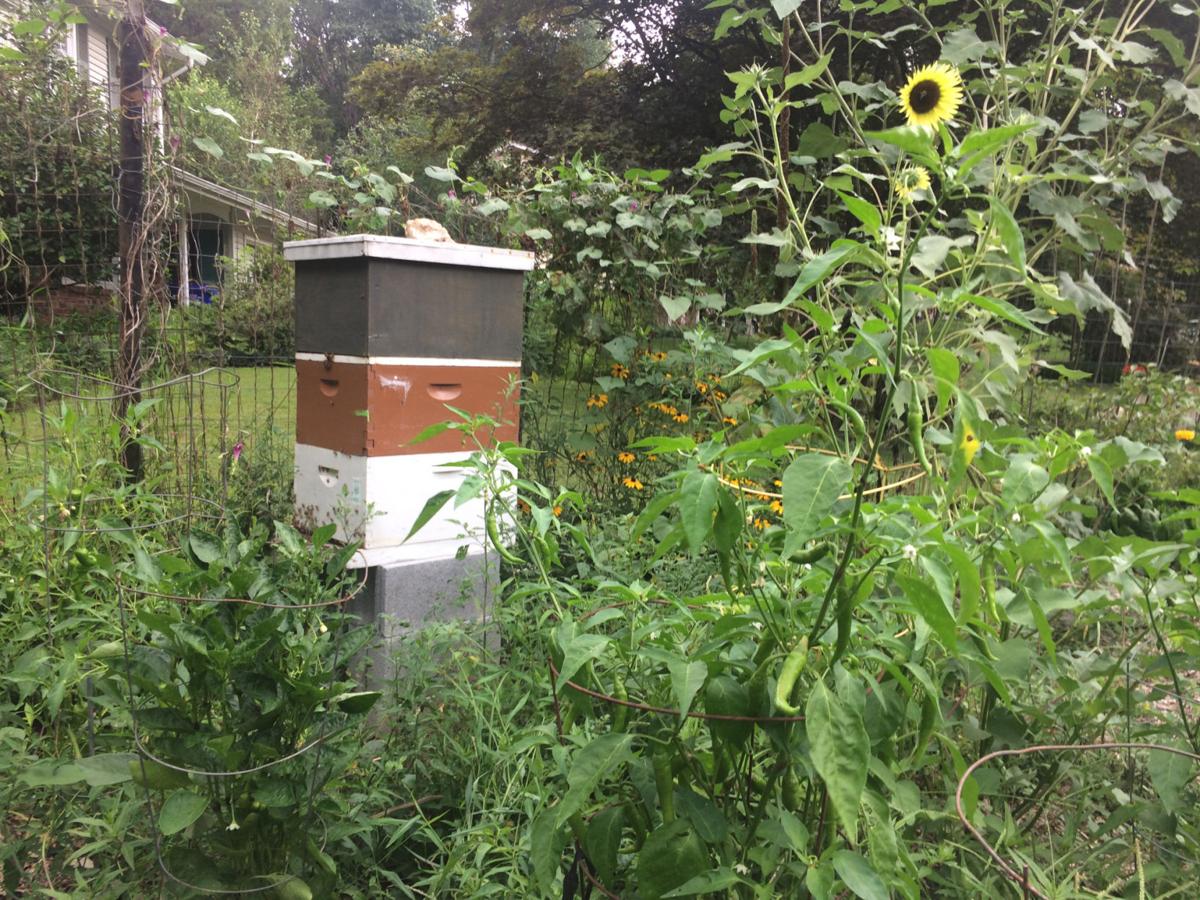 Don English’s beehive on the edge of the front garden yielded about 40 pounds of honey this summer, now bottled or on its way to becoming that favorite medieval libation, mead. Adrian Higgins/Washington Post 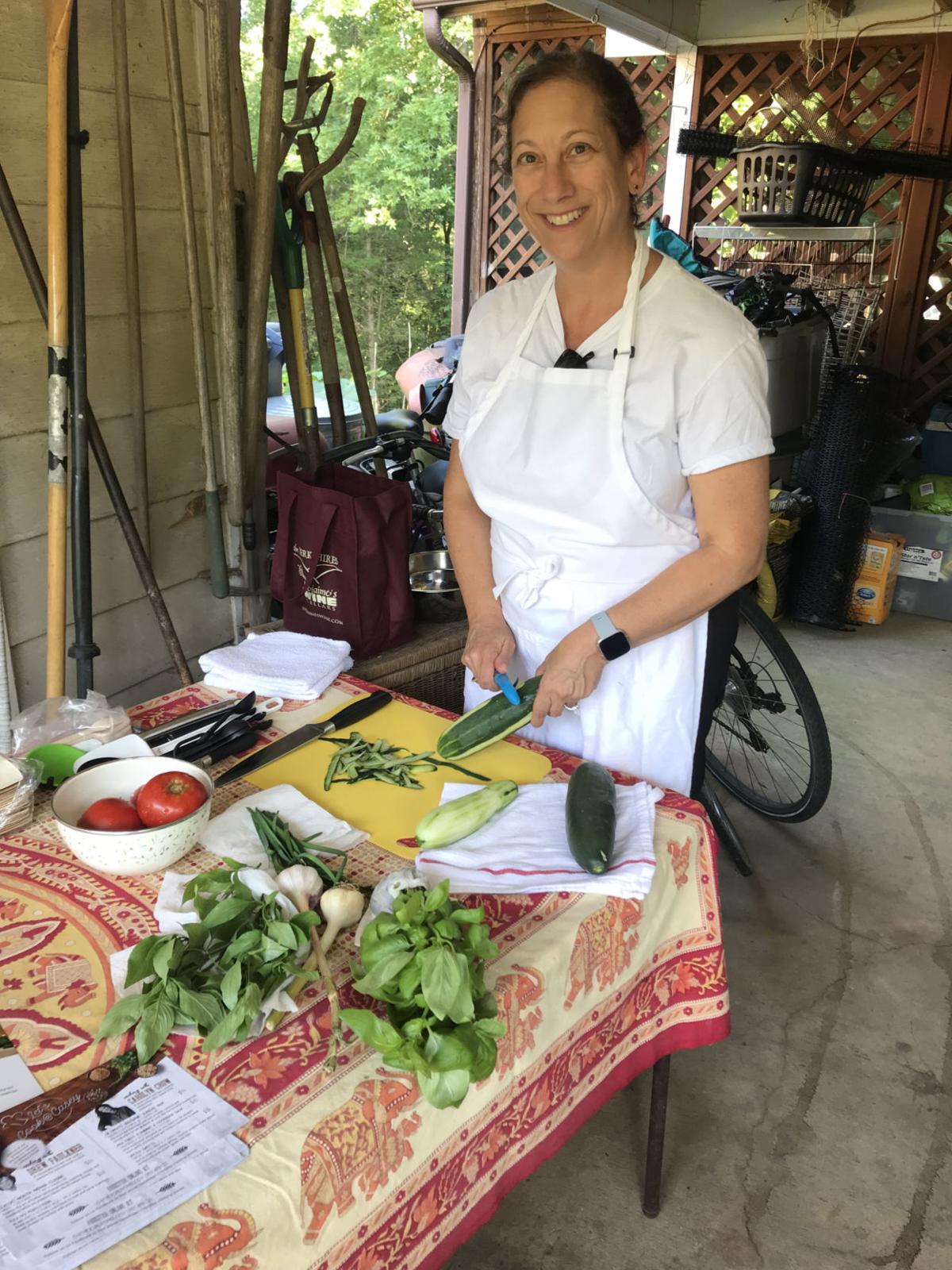 Wendy Nevett Bazil gives a cooking demonstration during an open house at the farmette. MUST CREDIT: .

Susan Eisendrath’s farm garden was once a typical grass lawn under the shadow of a big old silver maple. Now it is now an assortment of raised growing beds, mulched paths and fruiting vines attached to various structures. Adrian Higgins/Washington Post

Don English’s beehive on the edge of the front garden yielded about 40 pounds of honey this summer, now bottled or on its way to becoming that favorite medieval libation, mead. Adrian Higgins/Washington Post

Wendy Nevett Bazil gives a cooking demonstration during an open house at the farmette. MUST CREDIT: .

On the back of Susan Eisendrath’s little SUV, a bumper sticker reads: “Be the change you want to see in the world.”

You need only go a few feet — to her curbside front yard — to see Gandhi’s aphorism brought to life. What was once a typical grass lawn under the shadow of a big old silver maple is now an assortment of raised growing beds, mulched paths and fruiting vines attached to various structures. A vestige of grass remains, but the veggie beds are interspersed with sunflowers, monarda, butterfly weed and a few other blooms for the pollinators and birds. In one corner, a beehive rises like a lighthouse. Eisendrath and her husband, Joe Libertelli, call this their “farmette.”

Sandwiched between their home in Rockville, Md., and the circle at the end of a cul-de-sac, the yard is enclosed by a tall fence. The change they want doesn’t include feeding the deer — hence the fence — but it does extend to challenging the long-held suburban ideal of a front yard given over to the conforming lawn.

Lawns are in retreat as gardeners want more space for treasured plants, for rain gardens, for pollinator gardens and even as a place to tuck herbs and other culinary plants in with the ornamentals. Is suburbia ready for a full-blown upfront veggie garden, in all its late-summer raggedness? Eisendrath knows she is ready, and the planet is ready.

Rejecting the lawn and growing your own food organically is a practical if demanding way of reducing your carbon footprint “I think there’s going to be more acceptability as people are responding to the challenge of climate change,” she says. “And the fresh food movement has become much more prominent.”

The couple is not under the strictures of a homeowners association, though the turn to self-sufficiency, now in its 11th year, did ruffle some feathers. “We have had people call the county on us early on,” she said. The log bed edging has gone; the wood chip piles, too, and the fence has been fixed up a bit. “There are certain county codes we were made aware of in relatively gentle ways,” she said. “We have learned the system.”

When I visited recently, the corn was high, the tomato vines hulking and fruitful, and the amaranth — weedy if left to seed — ready for harvesting. “It has very tasty leaves,” said Eisendrath, 60.

The garden is shaped by the adornments gardeners use to protect their hard-won crops. Black netting sheaths the broad grapevine at the front of the house, forming a barrier between the clusters of developing fruit and avian raiders. CDs dangle high in the air, twisting in the breeze, to scare off the birds.

On an earlier visit, Libertelli, 62, lifted a tarp to show me logs seeded with mushroom spores (he also forages for mushrooms), and a month before, the couple gathered a garlic harvest — 1,500 bulbs. Some will be returned to the land as seed cloves next month, while the fall crop of peas and brassicas takes shape and the sweet potatoes plump up for harvest.

Libertelli concedes that the yard looks “shaggy” but says that “to grow something from seed and turn it into food strikes me as magical.”

Joining them in the garden this year are their friends Don and Ann English, who live about half a mile away. Don is a beekeeper with a hive on the edge of the front garden that yielded about 40 pounds of honey this summer, now bottled or on its way to becoming that favorite medieval libation, mead.

For Eisendrath, the idea that individuals can work to change the world is not some slogan but a way of being. She first gardened when she was in the Peace Corps in Tanzania. The couple lived on Capitol Hill (with a garden in the front yard of their rowhouse) before decamping to suburbia. They first lived in the house next door but sold it to acquaintances because the current home offered a sunnier location from which to expand their agricultural empire. (The rear yard sweeps down to the adjoining Rock Creek Regional Park and is dark and unsuitable for vegetable gardening.)

Besides the grapevine, a hopvine clambers up a pole, from which Don has harvested and dried the blooms to flavor his mead and home-brewed beer.

The entrance to the house is defined by an arched tunnel supporting kiwi vines, cardinal flowers and a hardy passionflower. Eisendrath reaches up to hold a green orb. “This is my pride and joy,” she said. “My single passion fruit.”

The fuel for the garden is a supply line of compost in various stages of preparation until, finished and soil-like, it is dug into the growing beds.

It’s almost impossible for the home gardener to address all of one’s food needs, even in such an intensive garden, and the harvests ebb and flow between a few spring peas and bushels of zucchini and peppers, not to mention the garlic bulbs. But Don English reckons for greens, the garden can at times provide up to 60% of his requirements.

Much of the garlic harvest goes into flavored oils and sauces. I recommend the green grape chutney, infused with fennel, chile, honey, ginger and fenugreek.

Don English, reflecting on their friends’ farmette, said: “Most people around here will have a few tomato plants and herbs, but for Joe and Susan, this garden takes a vast amount of their time, not only growing it, but processing it. I just don’t know many people who have done that.”

Ann English, a landscape architect, says as the fertilizer- and pesticide-dependent lawn becomes increasingly unsustainable as the dominant landscape element, “it’s really important that some new templates are put forward” that will allow homeowners to find different expressions of the domestic yard, including vegetable gardens.

“There has to be a marriage that hasn’t happened yet, in how to support the world, feed critters and pollinators, and then the soul, which is the aesthetic piece,” she said. “We are in this big transition.”

She said if she owned the property, she might have made it more decorative, but “I think it’s a bodacious demonstration.”

The corn is an heirloom popping variety named Glass Gem, though next year the Englishes are thinking of switching to sweet corn. That and other logistics “will be discussed over the winter with Joe and Susan,” Don English said.

Over a glass of mead? The answer came after a long pause. “I wouldn’t put it in the singular.”