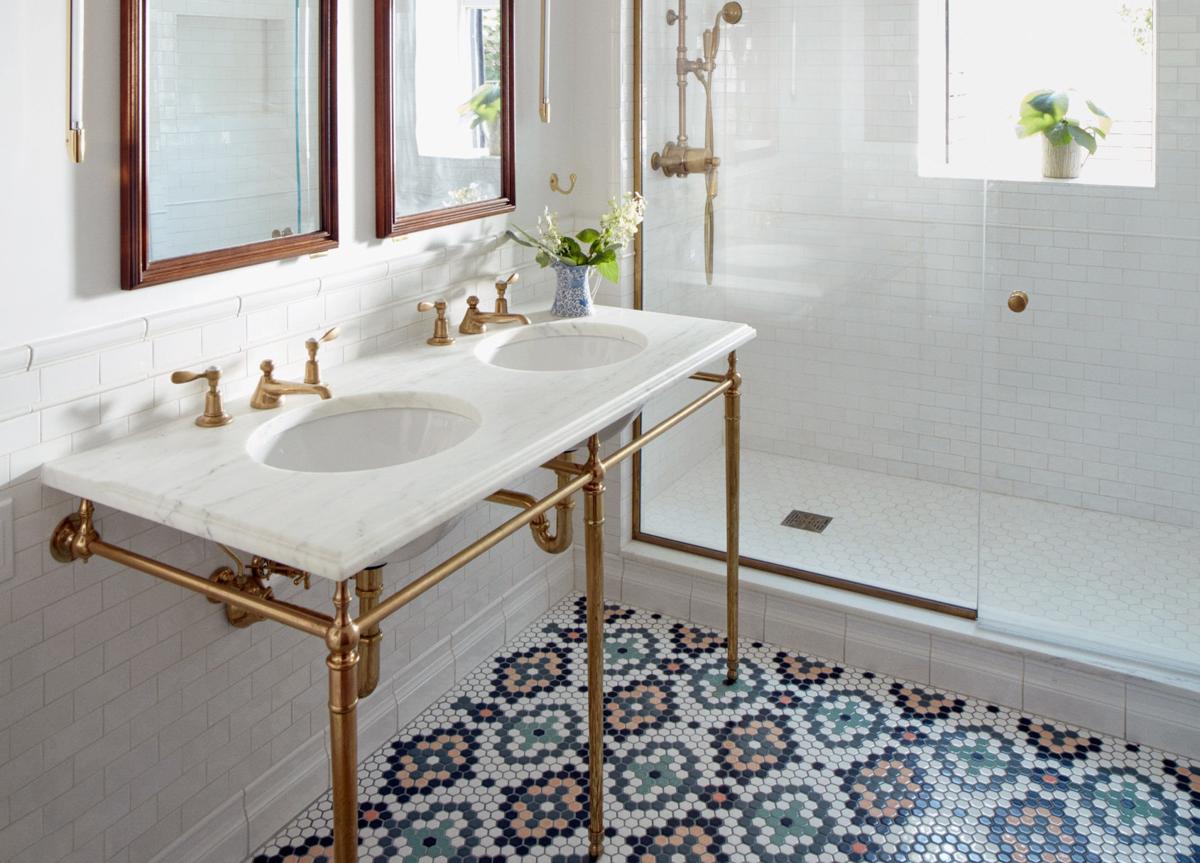 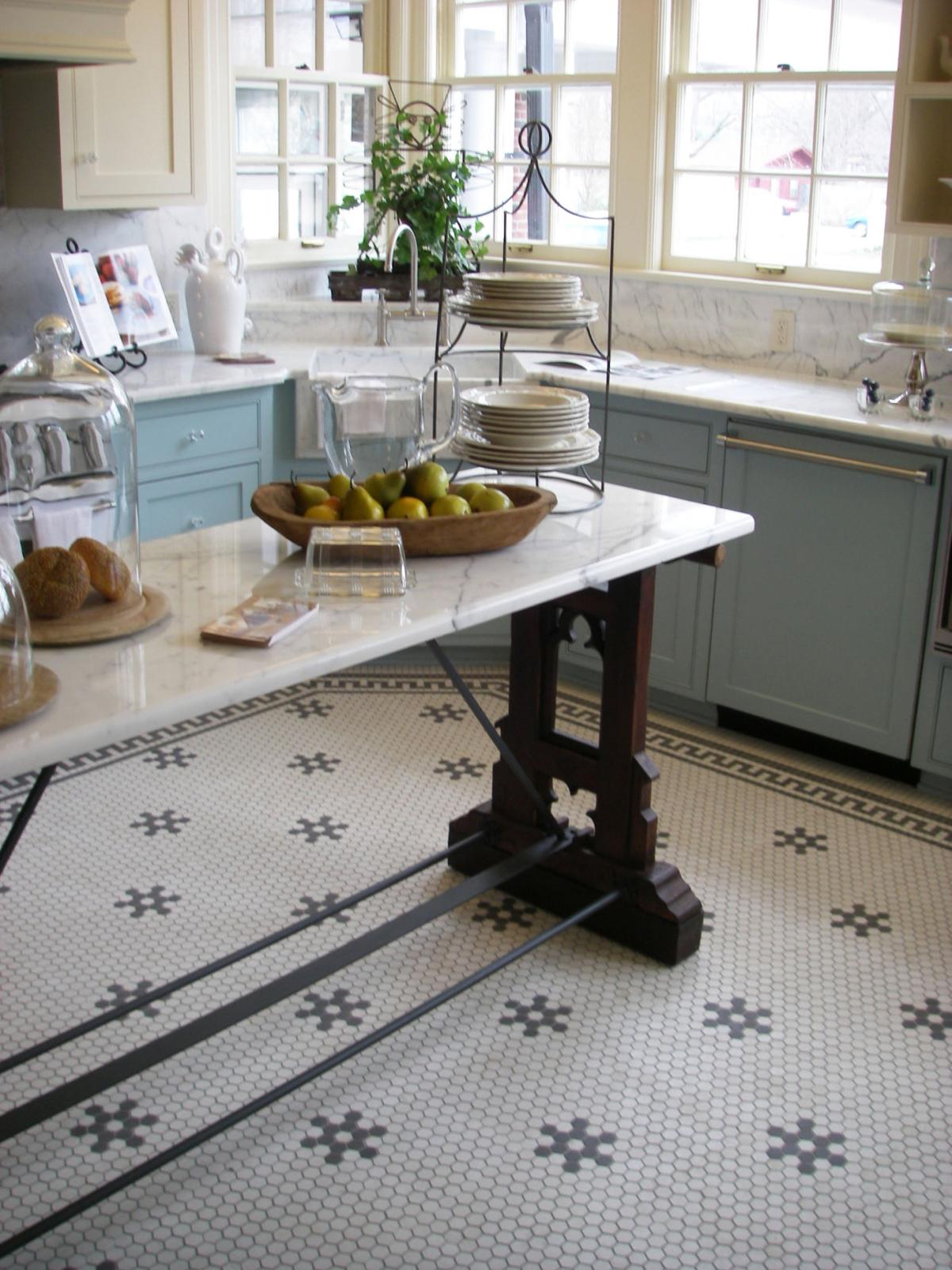 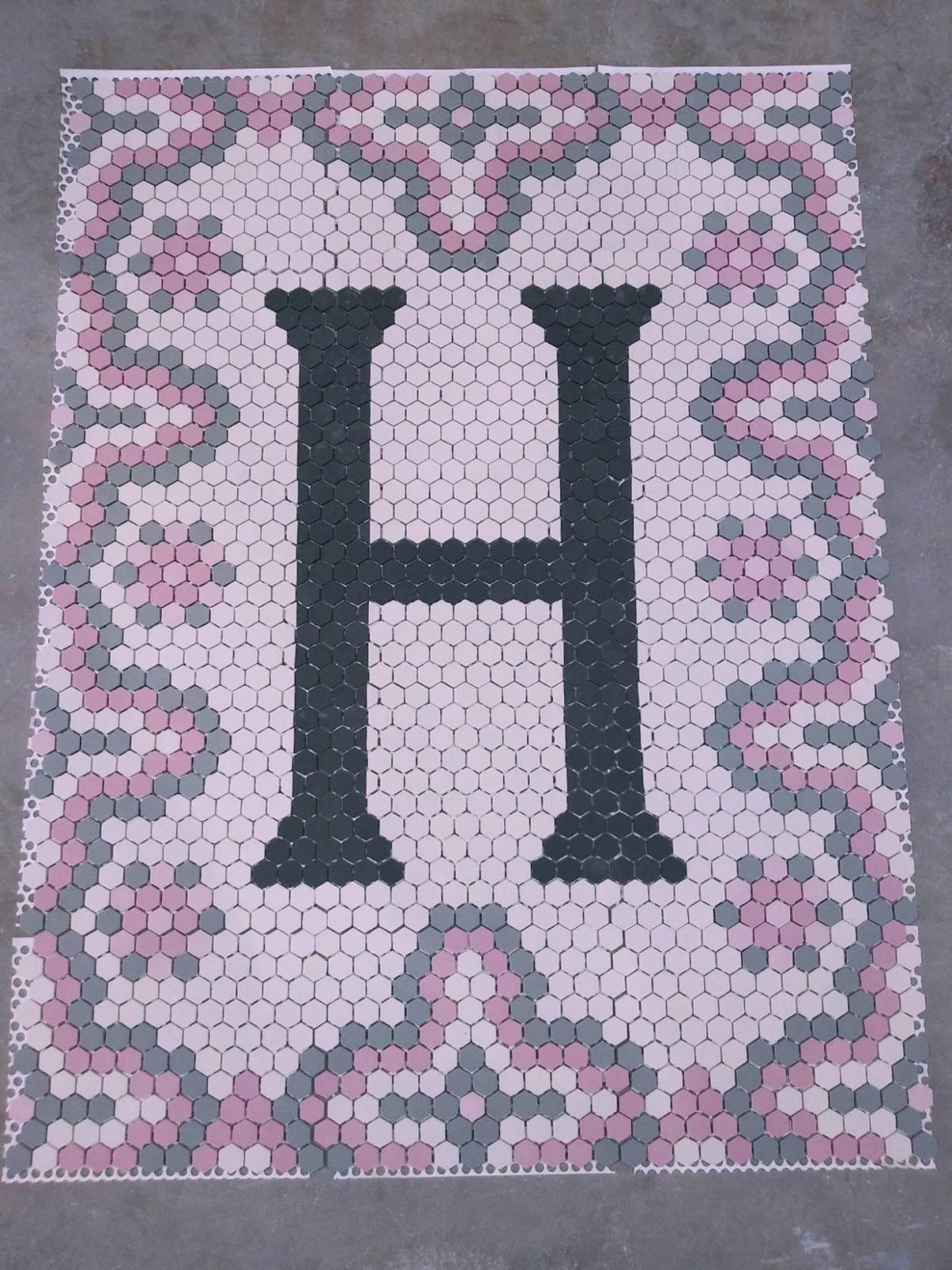 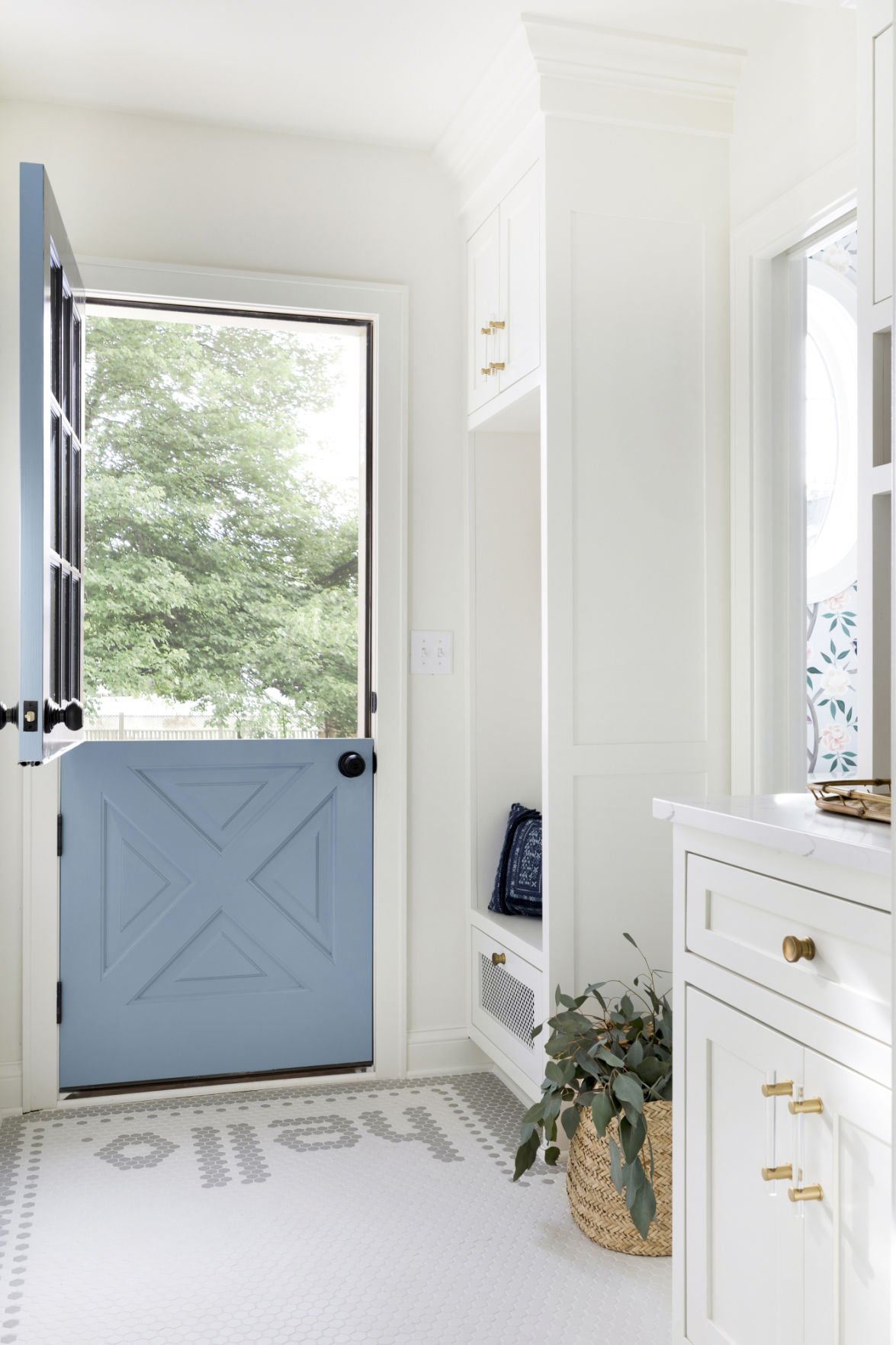 Above, designer Bria Hammel used hex tile to spell out “Hello” in an entryway. A custom border extends to the adjacent powder room. Spacecrafting Photography 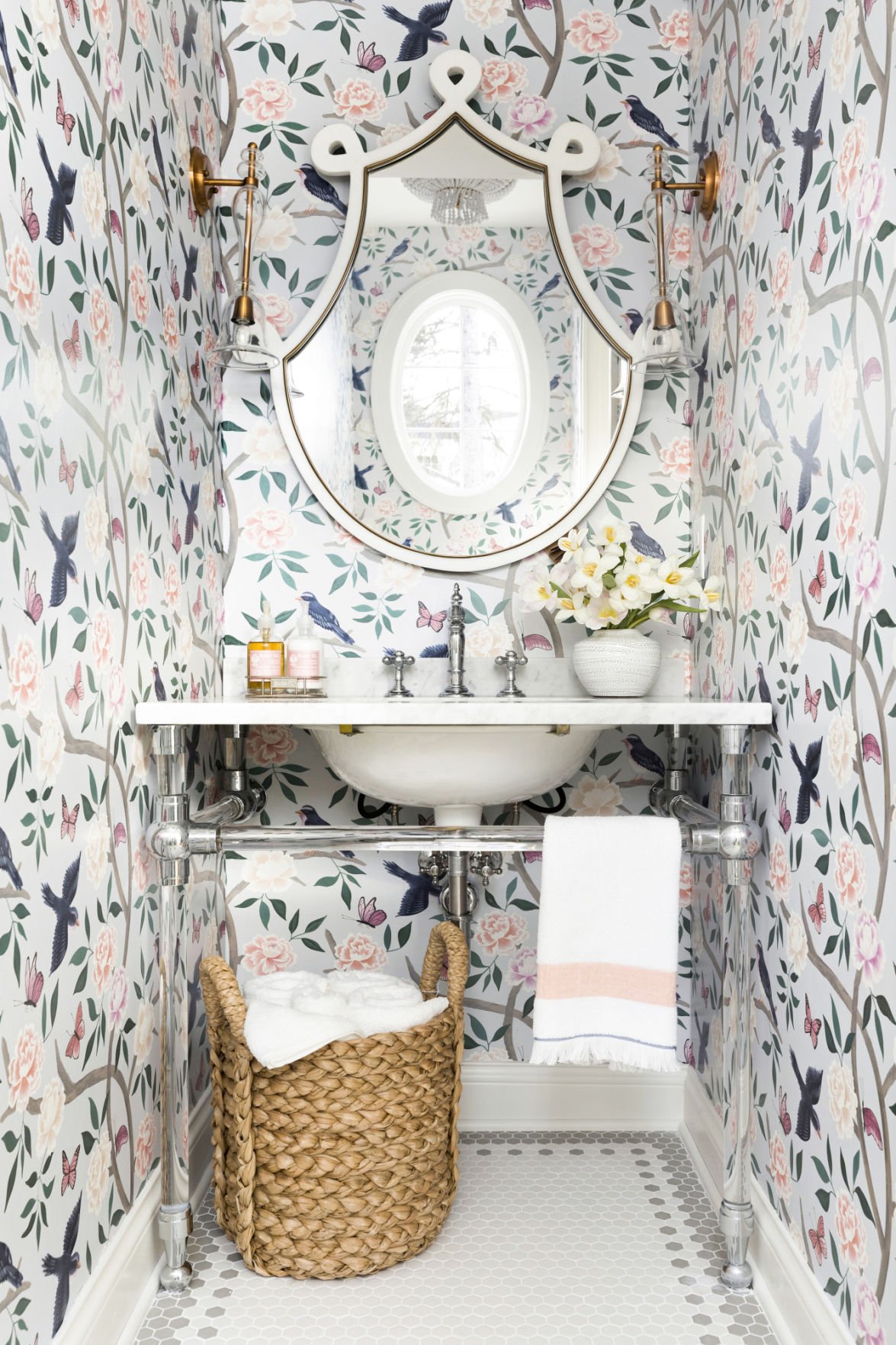 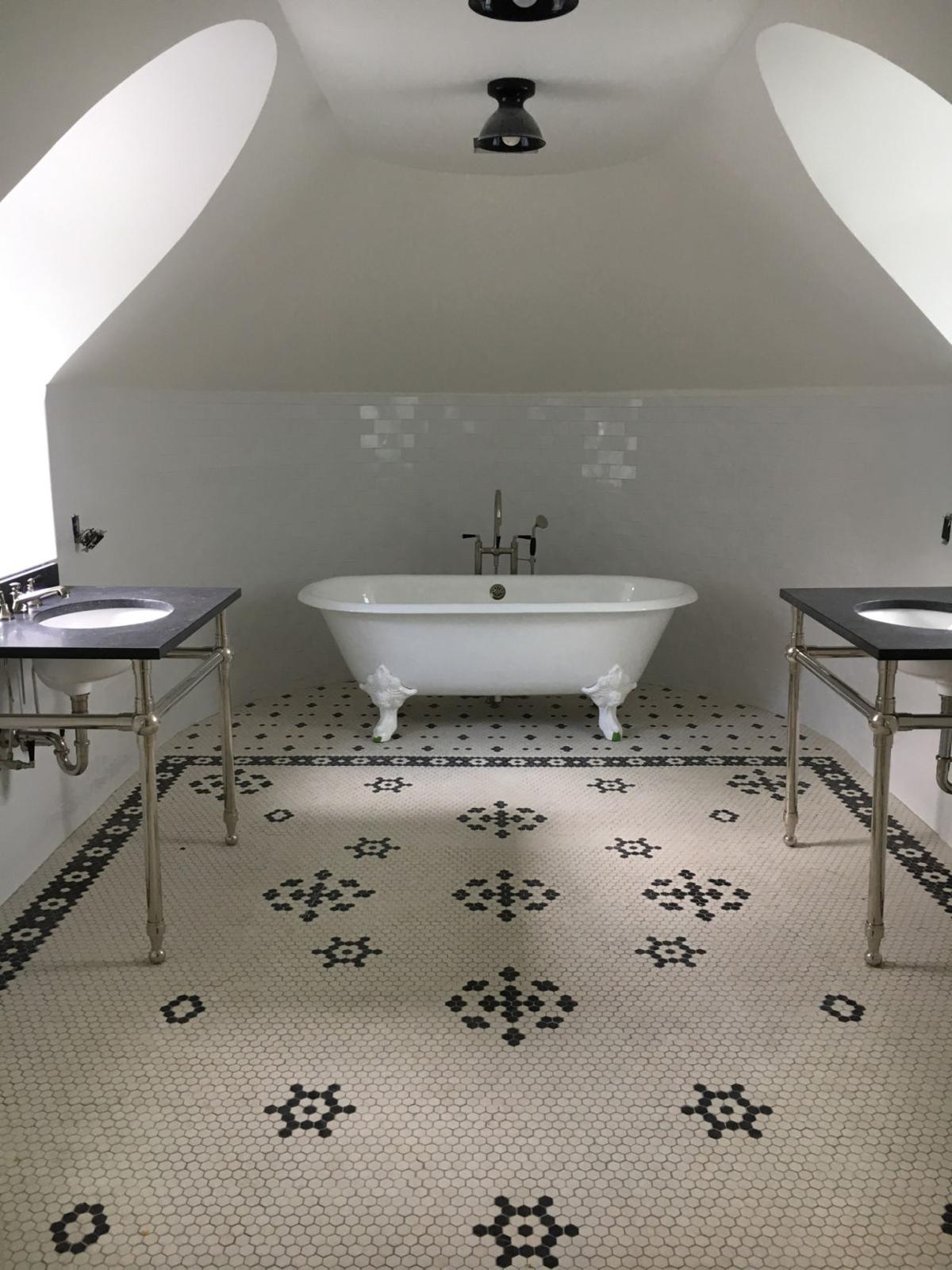 Above, designer Bria Hammel used hex tile to spell out “Hello” in an entryway. A custom border extends to the adjacent powder room. Spacecrafting Photography

Beloved for their old-fashioned charm, small mosaic tiles are resonating with homeowners who want floors that are uniquely patterned and boldly expressive. From itty-bitty hexagons to miniature squares, tiny tiles are back in a big way.

“Mosaics are appealing because they can adapt to different period styles and can be used in so many applications; they’re both timeless and versatile,” says Keith Bieneman, owner of Heritage Tile in Oak Park, Illinois. “They’re also wildly photogenic.”

He’s not kidding: Intricately tiled floors have been on the upswing in recent years, thanks in large part to the Instagram account @ihavethisthingwithfloors. Started by three Dutch friends who share a fondness for taking pictures of their footwear against striking floor patterns, the feed curates images of marzipan-hued mosaics from all over the world. For over 812,000 followers, the timeworn entries of old hotels and hat shops from Lisbon to Los Angeles serve as a reminder to look down and appreciate the history beneath your feet.

Unsurprisingly, homeowners want to bring the bespoke, vintage feel of the eye-catching tile they see on social media into their own homes. That some of these mosaics look as if they require an advanced degree in mathematics and an abundance of time to lay out only adds to their allure.

“There’s definitely an appreciation for the way things used to be made,” says Erin Oliver, vice president of Little Rock, Ark.-based American Restoration Tile. “Mosaics aren’t fast and they don’t look like everything else on the market.”

According to Bieneman, mosaic tile first became popular in the United States in the late 1800s, when plumbing came indoors and the need for a sanitary surface became paramount for germ-obsessed Victorians. Porcelain flooring was imported from England, but as demand for indoor restrooms grew, American manufacturers started to produce smaller unglazed porcelain tiles. Soon basket weave, penny-round and hex designs became ubiquitous in homes.

In commercial buildings, such as taverns and pharmacies, the mosaics grew more decorative, as the country transitioned from the Victorian era to the arts and crafts, art nouveau and art deco periods. Tile production peaked in the late 1920s, and then the Great Depression hit and many factories shuttered. “Amazingly, we’re now discovering patterns in old catalogues that were never even produced,” Bieneman says.

Most of the tile work Oliver is seeing today could be classified as traditional with a twist. “People are trying a newer look using the old materials,” she says. “For instance, they want flat hex tiles, but instead of black and white, we’ll see more modern color combos like blues and grays.”

To bring an authentic Old World feel to a home in Brooklyn’s Park Slope neighborhood, designer Jessica Helgerson used hex tiles in an array of poppy hues. “The client was a young family with a real love for color, and the idea of small mosaics felt historically appropriate for the house,” she says.

Designer Allison Tick took a similar approach for the attic bath of a Stanford White house in Tuxedo Park, where she used mosaic tile to pay homage to the home’s stately architecture. “The custom pattern is intended to enhance the rounded shape of the room and invoke the historical nature of the house,” she says.

But not all tile installations make a statement through color and pattern choice; some spell it out — literally. The typography trend, which started with hotels and restaurants trying to emulate old-timey signage, has crossed over into residential design, with homeowners using tile as a form of self-expression.

In a foyer, designer Bria Hammel used gray and white hex tile to craft a playful greeting. “Writing ‘hello’ was a way to add some whimsy to a classic entry,” she says. The space also features a custom gray border that flows into the adjacent powder room. Hammel admits getting the type right was a challenge. “We had limited options on the font style since the script needed to look fluid and be easily readable,” she says.

Oliver says she’s observed an increase in front entries that feature monograms and salutations, which is especially surprising in housing markets with frequent turnover. “If you embed your initials in the front entryway of your home, you’re definitely making a commitment to staying there,” she says. “When people want something highly personalized, I recommend doing the house number because the address isn’t likely to change. It’s a good way to put your mark on your home without the risk of losing resale value.”

Whether you’re using tile to create a simple border or something more elaborate such as say, a pixelated Persian rug, there are a few basics to keep in mind. Historical reproduction tiles lie totally flat, so they’re flush with the grout. Typically, made-to-order custom porcelain mosaics from both American Restoration Tile and Heritage Tile run between $25 and $30 per square foot, and that price includes design services. Many mass-produced porcelain mosaics are considerably less expensive. For example, a sheet of matte black and white hex mosaic with a snowflake design starts at $6.75 per square foot at Home Depot. Pattern and color choices are limited, however, and these tiles often have beveled edges, which result in a raised surface when installed. If you want your floor to look like an entryway or bath from 100 years ago, you’ll probably want to opt for flat tile.

Many companies will let you select colors and create a custom design using a computer grid on their website. Still, some creative homeowners prefer a DIY approach, especially when it comes to playing around with typography or doing a simple color change. Watch HGTV for any extended period and you’ve probably seen someone manually pop out individual tiles from an adhesive-backed sheet and swap in a different color as an inexpensive way to customize mosaics. While this method works, it can be time-consuming; some companies will do it for you at no additional cost. “Our pricing is based on complexity of pattern, so it doesn’t increase for color changes,” Oliver says.

If you happen to be a lucky homeowner with a vintage porcelain mosaic still intact, don’t fret if you spy a crack. Because tile production was standardized for many years in the United States, it’s likely you’ll be able to find replacements in the right size and color to restore the floor. “Our historical palette has matches for everything that was available from 1885 to 1940,” Oliver says.

Outside repairing the occasional crack, there isn’t a ton of maintenance involved in preserving an unglazed porcelain mosaic floor. Because porcelain is impervious to water, stains and temperature changes, it’s a durable and practical choice for high-traffic areas. “If you look at any 100-year-old tile floor, you’ll see a natural patina that comes from wear, and that patina becomes a protective coat,” Oliver says. “That’s why all these beautiful tiles have been around for over a century; they’ve stood the test of time.”