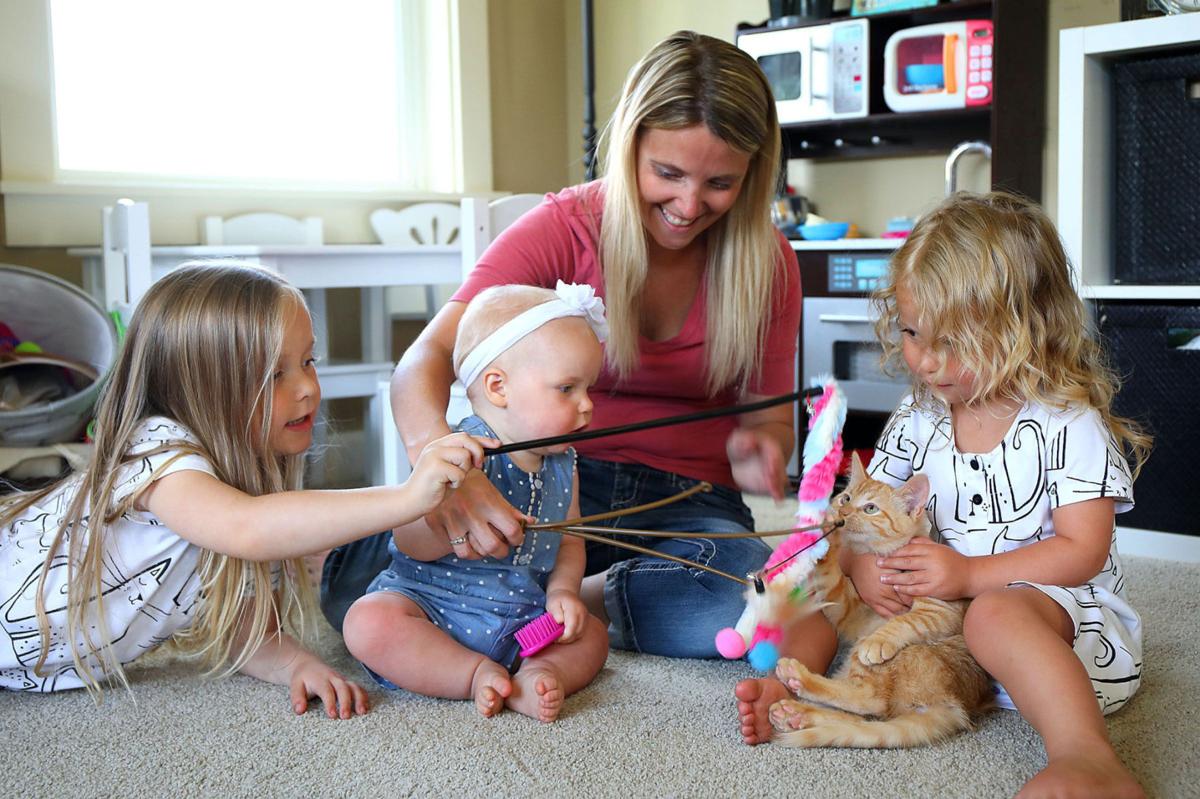 Erin Merryn plays with her three daughters, Abigail, from left, Claire and Hannah, and their cat Carrot at her Elgin home on July 22, 2019. Stacey Wescott/Chicago Tribune/TNS 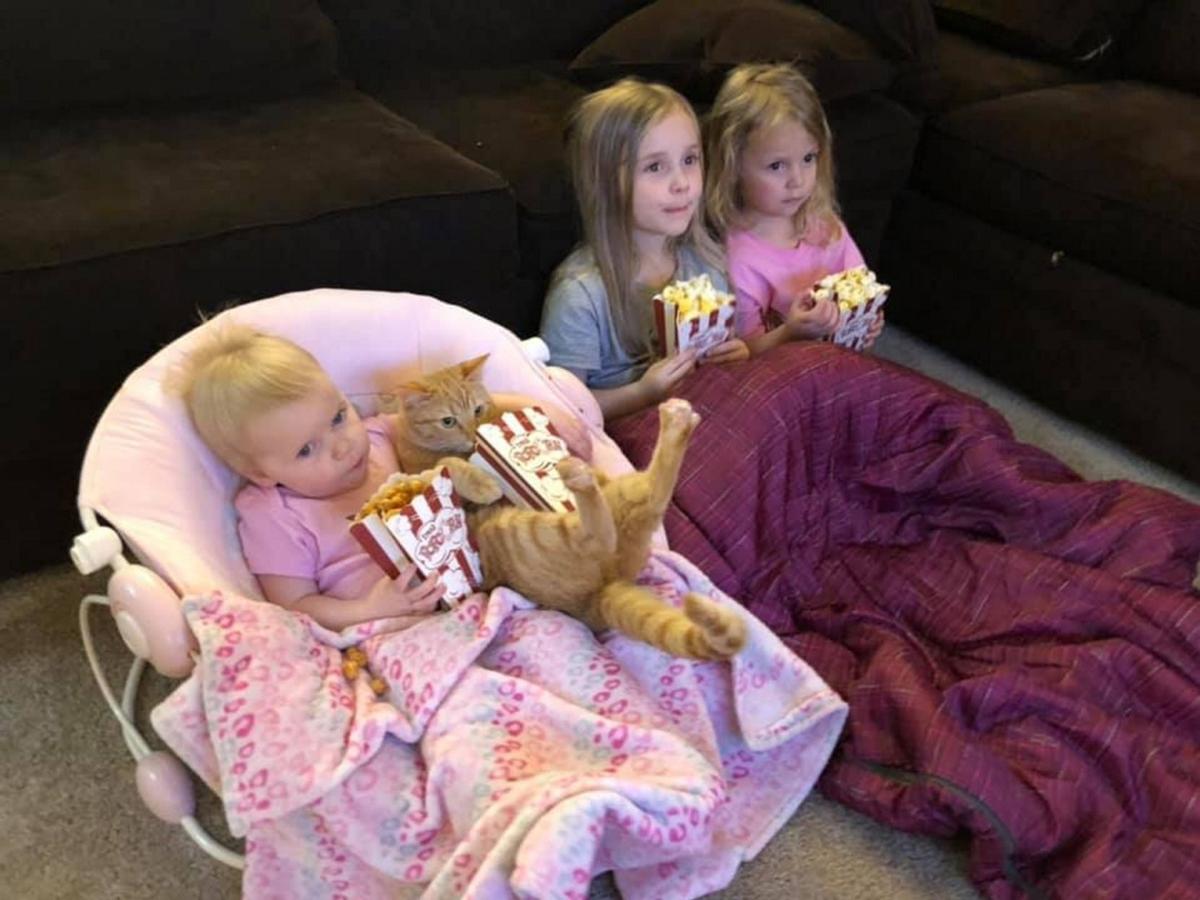 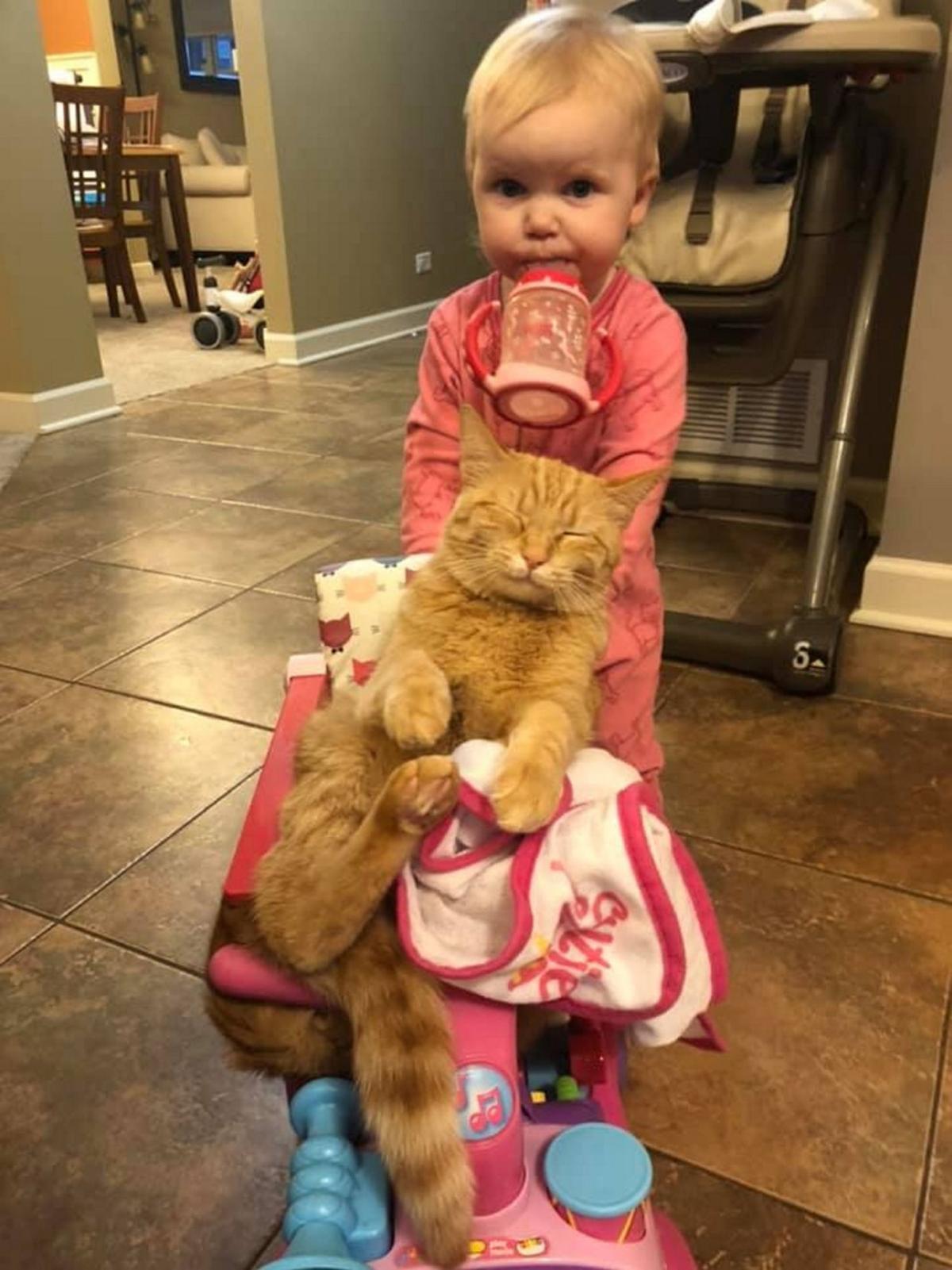 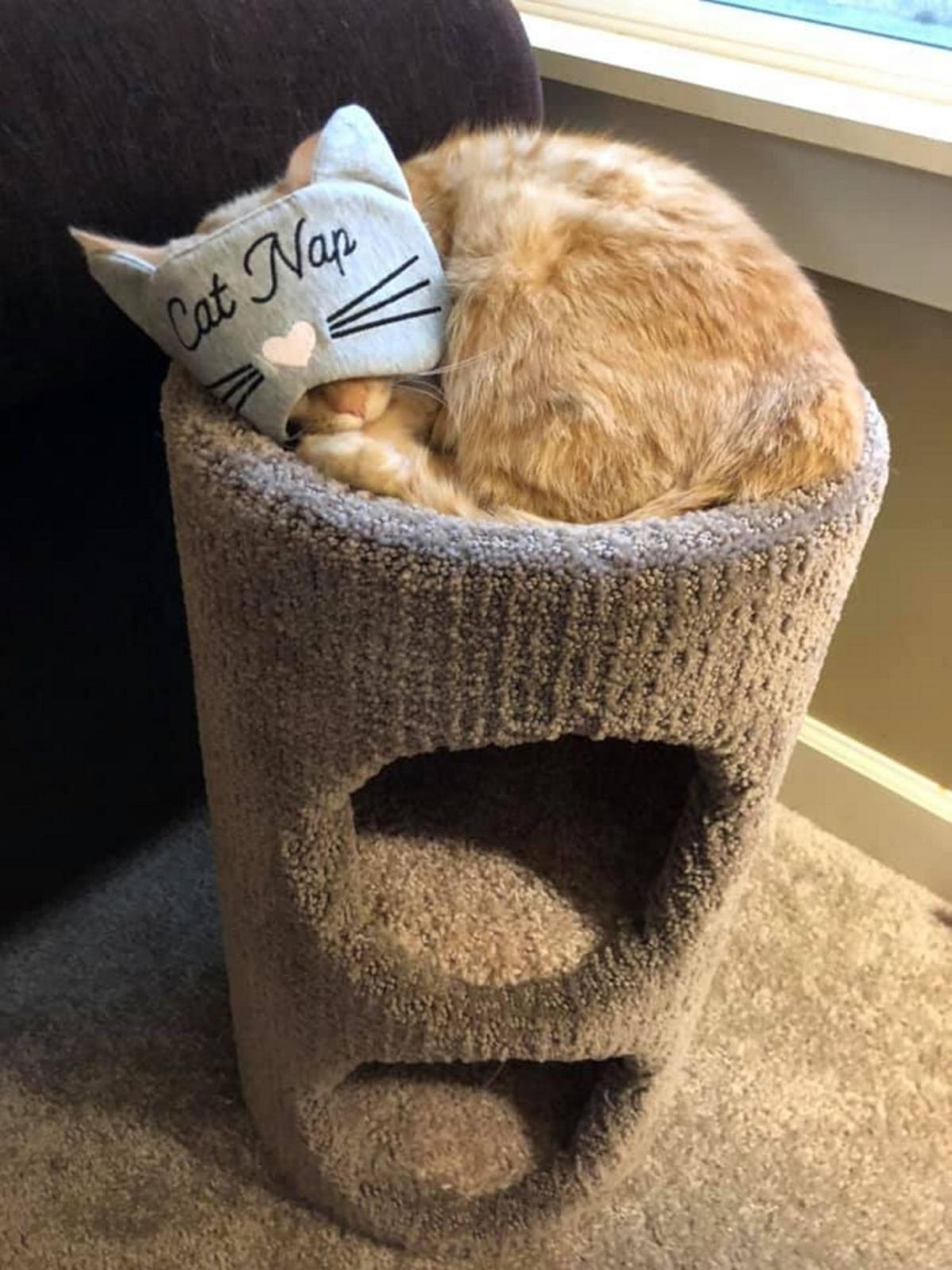 Carrot has always gone the extra mile for her favorite pint-size humans, ages 5, 3 and 1.

The outgoing orange tabby has allowed the Merryn sisters of Elgin, Ill., to push her in a stroller and dress her up in an apron.

In perhaps her most astonishing feat of feline tolerance, she relaxed and purred during a deluxe spa session with Abigail, 5, and Hannah, 3: A pink robe belted stylishly at her midsection, Carrot allowed the girls to tend her paws with cotton balls, brush her head and cover her eyes with a gel mask.

“With everything that’s going on, the laughter and the joy that the cat is bringing is needed now more than ever.”

With Carrot celebrating her first birthday, we talked to Merryn, best known as the child sex abuse prevention advocate behind 37 statewide Erin’s Laws, about her high-profile pet. Carrot has a following of 133,000 on Facebook, and 191,000 on Instagram. She’s been featured on “Good Morning America” and “Access Hollywood,” and two weeks ago she made a special plea to her high-profile fan Ellen DeGeneres.

For her birthday, Carrot wanted two things, she said in a social media post. The first was catnip — lots of catnip. The second was a phone call from DeGeneres.

“I just wanted to be the first one to call and wish Carrot a happy birthday,” DeGeneres said.

Carrot, who like many animal influencers has performed a valuable mood-lifting function in recent weeks, will turn 1 in style today. There will be decorations, party hats, even a (cat) cake.

The plan is to offer the guest of honor a can of wet cat food covered with treats and decorated with a candle, Merryn said: “I’m going to keep her fans entertained.”

In recent weeks, Carrot has appeared in coronavirus-related Facebook and Instagram videos in which she plays “quarantine” with the girls, attends a stuffed-animal e-learning class and learns how to wash hands properly.

Carrot joined the Merryn family as a kitten, with good references from the woman who cared for her and her siblings. But Erin and her husband, David, weren’t expecting that their new cat would be anything like Carrot’s Instagram-famous predecessor, Bailey, who had died six months earlier. Bailey, also an outgoing orange tabby, let the girls put him in dresses and sit him in high chairs. He’d even join the girls in the bathtub, Merryn said.

The plan was to keep Bailey’s popular Instagram account and just enjoy Carrot — named by Abigail — as a family pet.

But within 48 hours, it was apparent to Merryn that lightning had struck twice. Carrot was riding around the house in a toddler car and allowing the girls to put her in a toy shopping cart.

Carrot’s spa day video appeared on “Good Morning America” in February. One of her most popular videos, with 1 million views, features her purring loudly as baby Claire pats and cuddles her in Claire’s highchair.

In another video, Claire tries to get her fingers into Carrot’s mouth; Carrot turns her head away like a trusty golden retriever.

The only time Carrot gets a little rough is when the kids ignore her, Merryn said. She’ll hide and jump out at them as they go by. An online video shows Carrot impatiently pawing at a glass door that separates her from Abigail, who is playing outside.

Merryn learned that DeGeneres was a Carrot fan after the talk show host commented on one of the cat’s posts, saying that she checks Carrot’s Instagram account “all the time.”

An “Ellen DeGeneres Show” producer sent Merryn a private message, which led to a conference call. In a follow-up exchange, a producer said that DeGeneres found Carrot’s account on her own, and liked to show Carrot videos to colleagues.

DeGeneres posted about her birthday phone call to the Merryns. Erin Merryn said the talk show host praised Carrot’s temperament, comparing it favorably to her own cats’. DeGeneres also earned points by agreeing with Merryn about the value of funny cat videos in a time of national distress.

DeGeneres even announced the nature of the phone call to her wife, Portia de Rossi, according to Merryn.

“I’m on the phone with the cat named Carrot’s mom,” DeGeneres said.