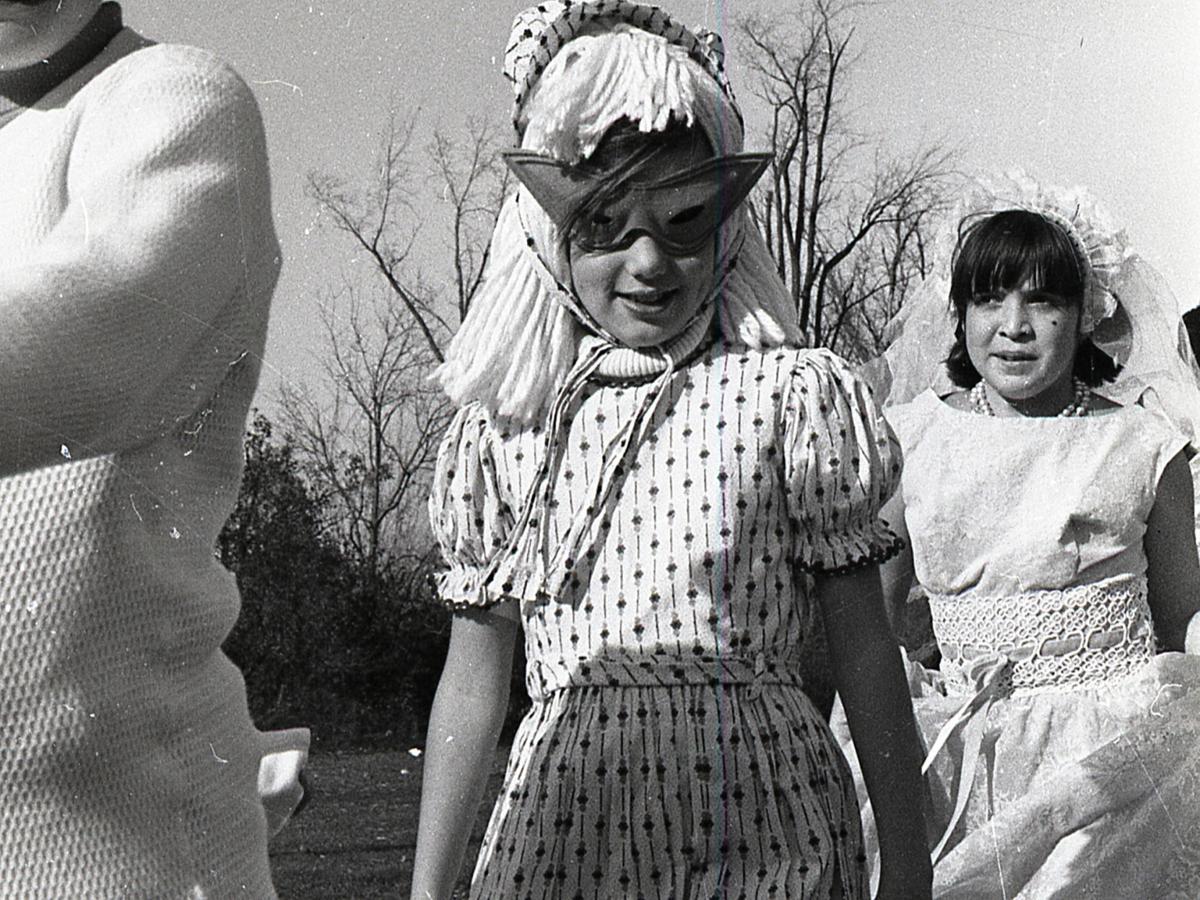 Ohio Elementary School students dress in costumes to participate in Halloween celebrations in 1969. Throughout north country history, celebrations weren’t alwaysas innocent. Many used it as anexcuse for vandalism and other acts. Watertown Daily Times 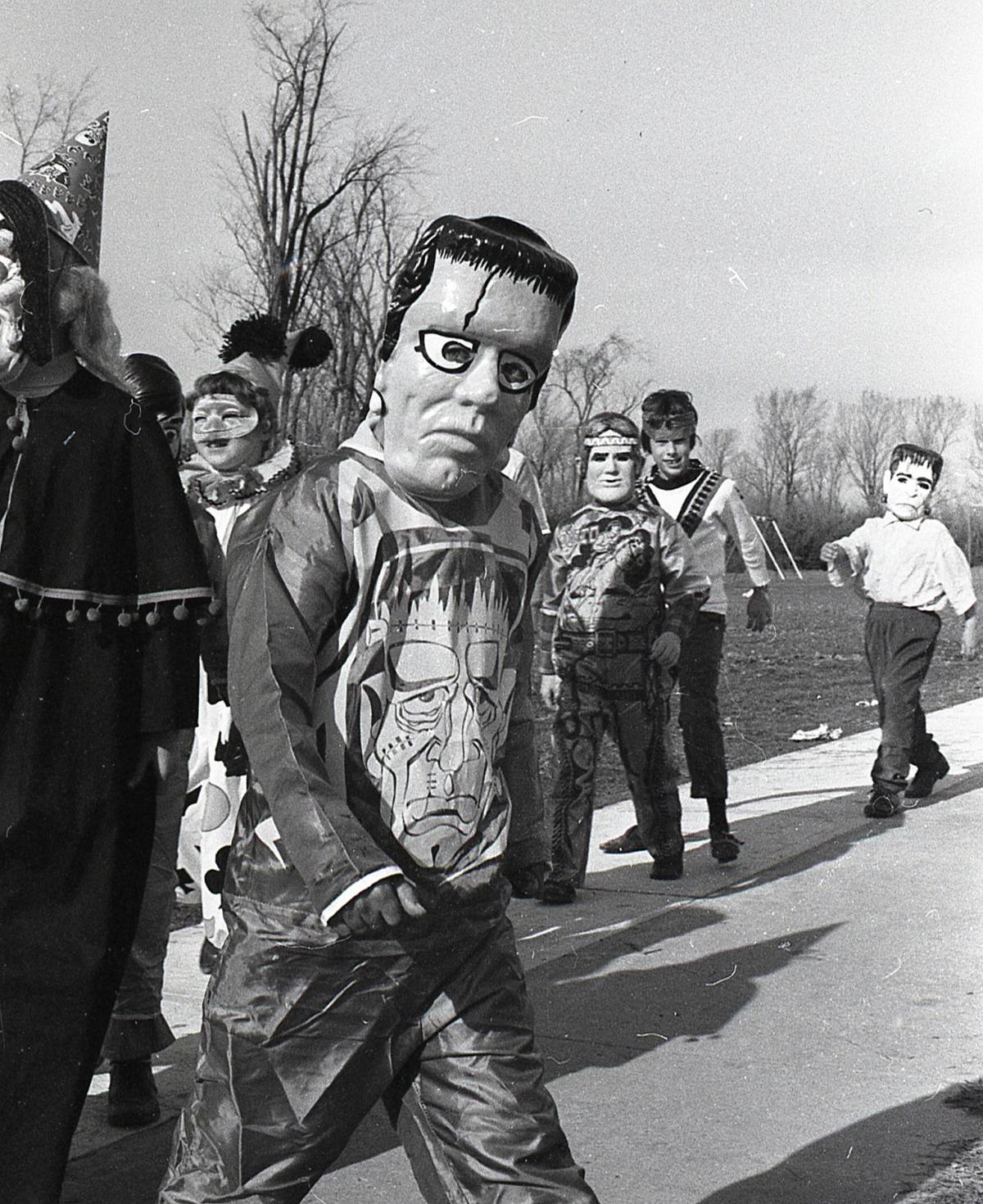 Ohio Elementary School students parade in their Halloween costumes in 1969. While the children celebrated with costumes or sweets, in the city’s past, youth have sometimes used the day as an excuse to cause mayhem. Watertown Daily Times

Ohio Elementary School students dress in costumes to participate in Halloween celebrations in 1969. Throughout north country history, celebrations weren’t alwaysas innocent. Many used it as anexcuse for vandalism and other acts. Watertown Daily Times

Ohio Elementary School students parade in their Halloween costumes in 1969. While the children celebrated with costumes or sweets, in the city’s past, youth have sometimes used the day as an excuse to cause mayhem. Watertown Daily Times

The scariest thing about the local Halloween season could be looking back to see how much havoc it caused when the holiday evidently gave youths a free pass to create general mayhem.

“Almost anything in the line of pranks can be done with a feeling that it will be appreciated,” the Watertown Daily Times reported in an Oct. 28, 1914 story.

Property destruction grew to become a serious problem in the early and mid-1900s during Halloween and even in the weeks leading up to it. In 1946, Watertown City Police plans for Halloween reflected how serious the situation was.

City police chief Edward J. Curtin said that “All available police cars, supplemented by members of the department in plain clothes and using their own private vehicles, will be out for citywide protection,” on Oct. 30 and Oct. 31.

In 1948, in the days leading up to Halloween, complaints caused by “gangs of children” ranged from cut clotheslines, tipped-over garbage pails to a Park Drive residence, where 14 BB-gun pellets were fired through a window. Bottles were often broken on sidewalks and windows were soaped. In the mid-20th century, firecrackers were tossed into door mail slots of Watertown residences and tossed at cars.

At the intersection of Thompson Boulevard and Myrtle Avenue in 1948, a knife was used to slash a street light rope, sending “the valuable fixture” crashing to the ground.

Cars were favorite targets. In 1950, a Mill Street resident reported that the finish on his 1946 vehicle had been ruined with aluminum paint. A full half pint was used for the deed.

Children threw stones, lobbed tomatoes and tossed eggs with abandon in previous years. For example, in 1950, four windows of North Junior High were smashed by stones.

A Coffeen Street resident considered vigilantism in 1958 after a stone was thrown through his bedroom window. The man said “this was not the first time that windows had been broken at his home and that from now on, he will take matters into his own hands,” the Times reported.

Halloween-related BB-gun shootings weren’t uncommon during Halloween in the city. In 1958 a Hungerford Street resident reported that two of her windows were shot at.

Also in 1958, Chief Curtin, apparently speaking of past events, warned that the removal of steps from porches and entranceways would be considered “an act of malicious mischief” because it could result in injury or death.

In a more serious case, in 1955, two partially finished homes in Watertown were damaged to the extent of $2,500. One of the homes was on South Hamilton Street, where “the gang among other things, blocked the double kitchen sink with cardboard and turned on the water taps before leaving,” partially flooding the basement, the Times reported.

In Sackets Harbor in 1955, Police Chief John E. Leuze “had to call for sheriff’s office help at 3:30 this morning (Oct. 31) after a defiant gang of teenagers refused to remove a road barricade on the main street,” the Times reported.

The 1955 incidents caused the Times to editorialize:

Halloweeen-related vandalism has continued over the years, but by the 1970s, the blatant vandalism, especially by “gangs of youths,” had subsided. The decline of Halloween hijinks may be attributed to the holiday becoming more commercial, with more adults involved. For children, the main focus became going to homes for candy, often escorted by adults.

The National Retail Foundation reported that in 2018, a record $86.79 per person was spent on Halloween-related items.

The decline of serious Halloween pranks and crimes is reflected in Times coverage of the holiday over the years.

In 1975, the Times noted, “It appeared that trick-or-treaters were happy with their treats, or had left their ideas of vengeance at home.” A city patrolman called the situation “unbelievable.” But there was on case of two youths dressed as “tramps” trying to steal the candy of another pair in the Solar Building.

But Halloween still brings out vandals and their shenanigans, although the past two decades have noted a steep decline, if reports in the Watertown Daily Times are any indication.

More recent cases of vandalism related to the day, according to Times files:

1988: “An abandoned house was torched in Philadelphia, a porch was burned near Brownville, litter was dumped on the highway at Adams Center and eggs were tossed at children and police in Watertown,” the Times reported.

1990: “A burned abandoned house in the town of Henderson and a smoke bomb planted on a front porch in Watertown were the main events of an otherwise fairly quiet Halloween night in Jefferson County.”

1992: “Arrests are pending today in Lewis County after a gang of rowdy youths dumped about 50 pumpkins near Main and Lewis streets in Beaver Falls on Halloween night, causing a major traffic hazard,” police said.

1994: In Ogdensburg, police received more than 20 complaints of property damage to homes and businesses, mostly in the city’s core. By 9 p.m., there were six officers and two dispatchers on duty to handle the complaints, twice the nightly average. Sgt. Frederick P. Bean estimated thousands of dollars worth of damage was done.

“In the rural areas it was one of the quietest Halloweens I can remember,” St. Lawrence County Sheriff Keith K. Knowlton said.

Firefighters in Antwerp were called out three times, making their first run to the local cemetery, where a storage shed there had been set on fire.

1996: “The night sky was lit up near Evans Mills, Antwerp, Ellisburg and Henderson Harbor by flames sparked by mischief-makers. The most damage was in the Evans Mills region, where two vacant houses were destroyed.”

1997: “Four Colton teens were issued appearance tickets by St. Lawrence County sheriff’s deputies, who were called in to break up several gatherings of youths who were reported to be throwing eggs and pumpkins and rolling tires down hills at cars.”