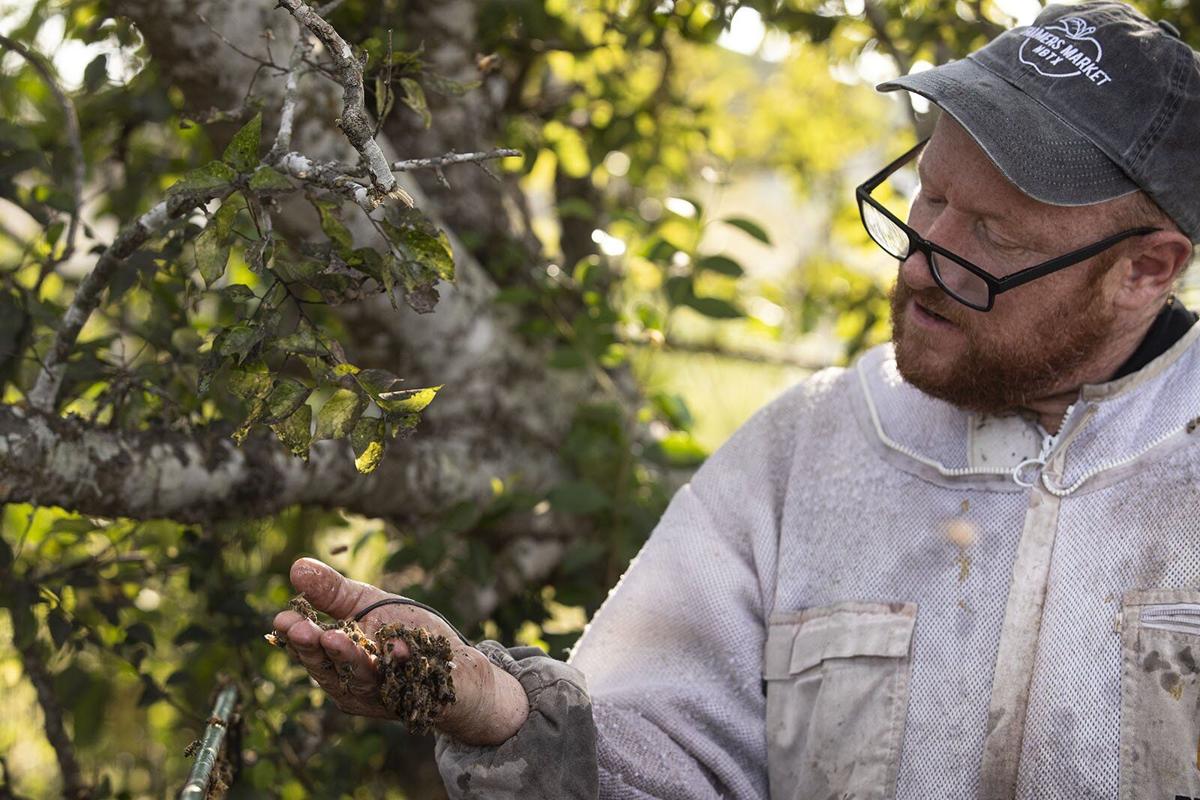 Bees cover beekeeper Charlie Agar’s bare hand as he looks for the queen bee. Agar said he normally wears gloves, but this hive was gentle and well-behaved. Agar looks for the queen when relocating hives because she is vital to the success of the colony. Mikala Compton/Austin American-Statesman/TNS 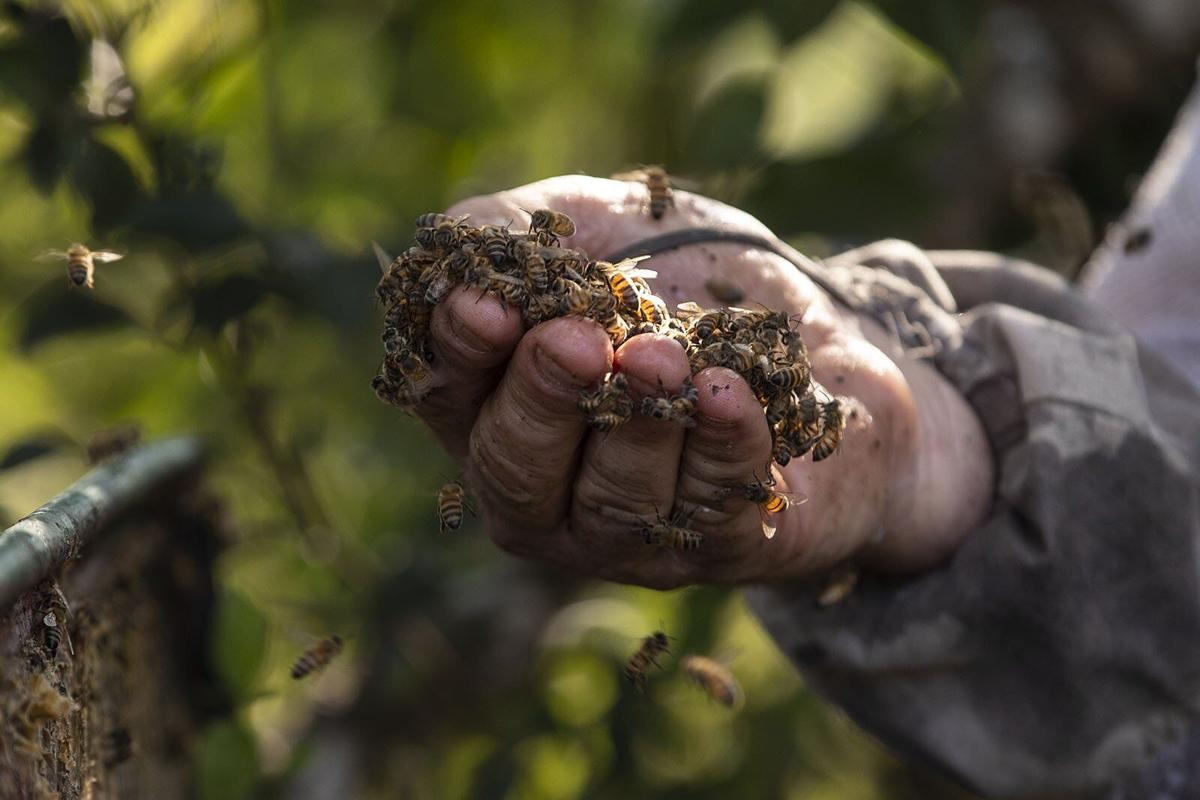 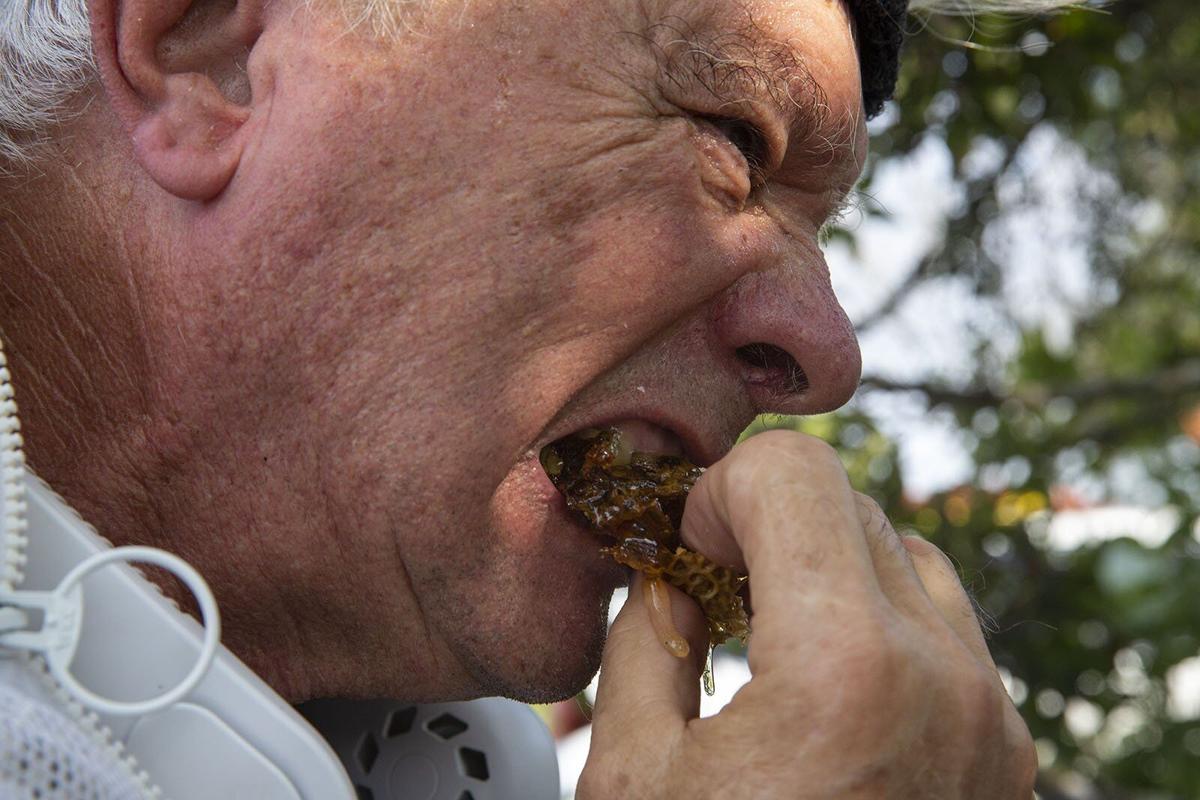 Beekeeper Alfred Friedle takes a bite of honeycomb as they remove bees from a property in San Marcos. Mikala Compton/Austin American-Statesman/TNS 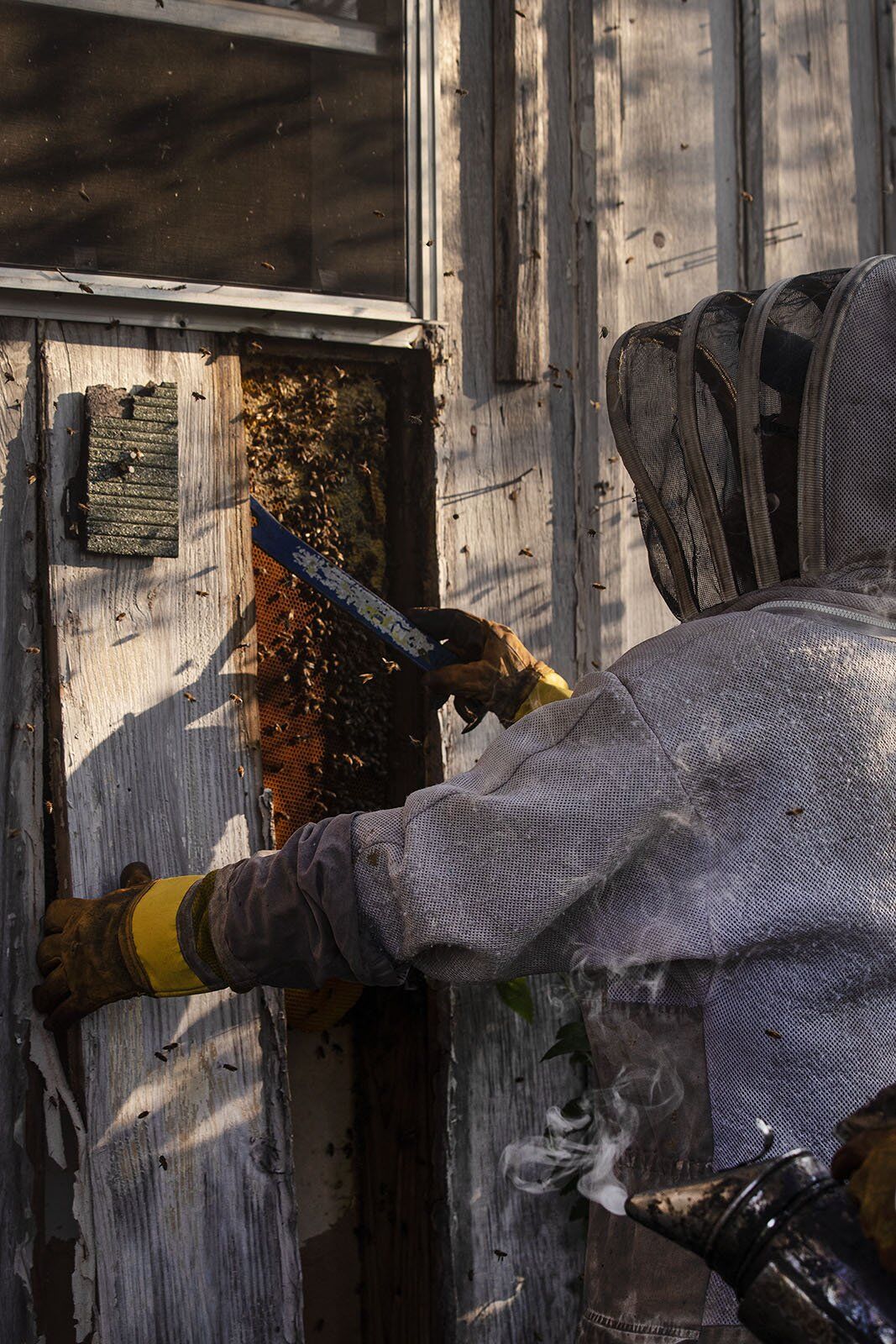 Beekeeper Charlie Agar pries back a panel to remove bees from a property in San Marcos with Charlie Bee Company on Sept. 1. Mikala Compton/Austin American-Statesman/TNS

Bees cover beekeeper Charlie Agar’s bare hand as he looks for the queen bee. Agar said he normally wears gloves, but this hive was gentle and well-behaved. Agar looks for the queen when relocating hives because she is vital to the success of the colony. Mikala Compton/Austin American-Statesman/TNS

Beekeeper Alfred Friedle takes a bite of honeycomb as they remove bees from a property in San Marcos. Mikala Compton/Austin American-Statesman/TNS

Beekeeper Charlie Agar pries back a panel to remove bees from a property in San Marcos with Charlie Bee Company on Sept. 1. Mikala Compton/Austin American-Statesman/TNS

SAN MARCOS, Texas — When Charlie Agar pried open the lid of an abandoned piece of farm machinery in San Marcos recently, he found a sweet treasure inside. Glistening honeycombs lined most of the rectangular hollow inside the equipment.

But the honey was guarded by 5,000 to 6,000 wild bees that Agar had been hired to remove. One immediately stung him on his hand. The 50-year-old New Braunfels, Texas, beekeeper just grinned, scooped his bare hand inside the hive and brought out a fistful of bees to examine.

“I’m just looking for the queen,” he said.

Agar, 50, not only removes wild beehives for a living but also vacuums up and moves the bees to a rural piece of property where he builds new hives for them. He rents some of the hives out to local landowners, who can place them on their land to get a break on their property taxes under certain guidelines.

He also mentors military veterans as part of a nonprofit program called Hives for Heroes that connects veterans with beekeepers. Agar said beekeeping can help calm people with post-traumatic stress disorder because it makes them focus on the bees.

Helping honeybees is important because they provide pollination that contributes nearly $20 billion to the value of U.S. crop production each year, according to the American Beekeeping Federation. But honeybee colonies are suffering from disease and die-offs across the nation. A national survey done by the nonprofit Bee Informed showed that from October 2020 to April 2021, an estimated 32.2% of managed colonies in the United States were lost. In Texas during that same time period, 37.5% of the managed colonies were lost, according to the survey.

Agar, who sells the honey from his hives, said he has about 120 bee colonies. “My slogan is ‘Saving bees and sweetening teas,’” he said.

On the same day he removed the bees from the farm equipment in San Marcos, Agar tore off the siding of an old house on the same property and found honeycombs built against the wallboard surrounded by about 10,000 swarming bees.

He and his friend Alfred Friedle, another beekeeper, gently puffed smoke on the hive to make the bees confused and a bit more docile. They pulled the honeycombs off the wallboard and threw them into a bucket to take back to Agar’s hives to feed his bees.

Agar said he doesn’t sell honey from wild hives because he doesn’t know whether someone has sprayed them with pesticide.

After he removes a wild hive, he usually replaces the feral queen with a domesticated queen so the new hive he builds produces gentler bees, he said.

The bees that he vacuumed into a small tank from the farm equipment and the wallboard were not Africanzed bees. Africanized bees look like other honeybees but are known for their aggressive behavior.

Agar said he knew the bees he removed were not Africanized because even though he was stung once, the bees did not continue to attack him.

“I’ve been followed for a mile in my car by Africanized bees,” he said.

If someone is attacked by Africanized bees, the best thing to do is to run indoors or get inside a car because the sting will continue to attract more bees, he said.

Agar said he has been stung multiple times, but that doesn’t deter him even though he is mildly allergic to bees. “I get hungry to open up a hive,” he said.

The demand for bee removal has been nonstop this summer, said Agar, who has been a beekeeper for seven years and had previous careers as a newspaper reporter and travel writer. His business is called Charlie Bee Co.

Agar said he got five calls in one day for help and has his calendar booked for weeks. The most common place to find beehives is in the eaves of homes and inside water meter boxes, he said.

One of his most challenging removals happened when he opened up a ceiling and honey poured down on his protective suit, he said. He had to follow the bees that had escaped to an attic, where it was 110 degrees, he said. By the time he emerged, he had insulation from the attic stuck to the honey on his suit.

How to plant a bee-friendly garden: The Texas A&M AgriLife Extension website provides tips at bit.ly/3h1ndjT. Some of those tips include planting morning glory, prairie verbena and sunflowers in the fall.

How to treat a bee sting: Remove the stinger by scraping it with your fingernail or a credit card (not tweezers, which can cause venom to spread), wash the area, apply a cold pack and take over-the-counter pain medications as needed. Go to an emergency room if signs of an allergic reaction appear, including nausea, hives and dizziness.