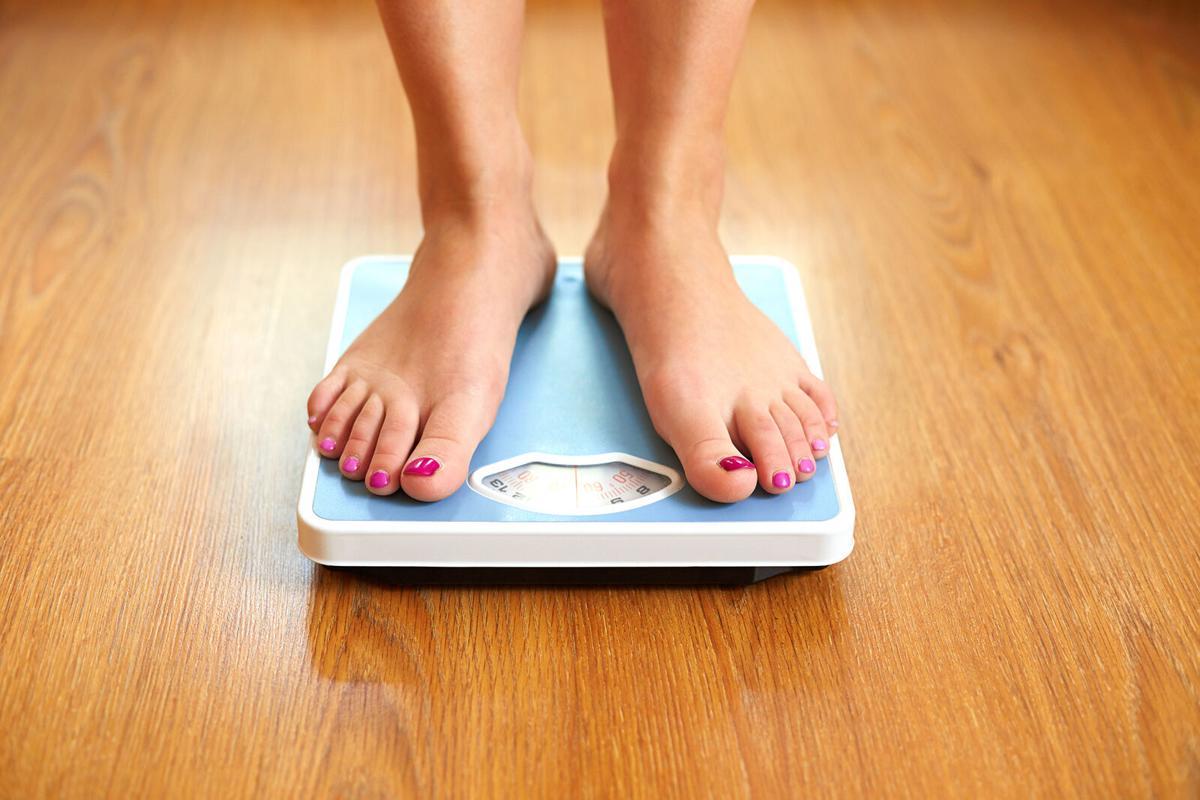 U.S. workers bothered by the Quarantine15 aare looking to lose weight before heading back to office life. Dreamstime/TNS 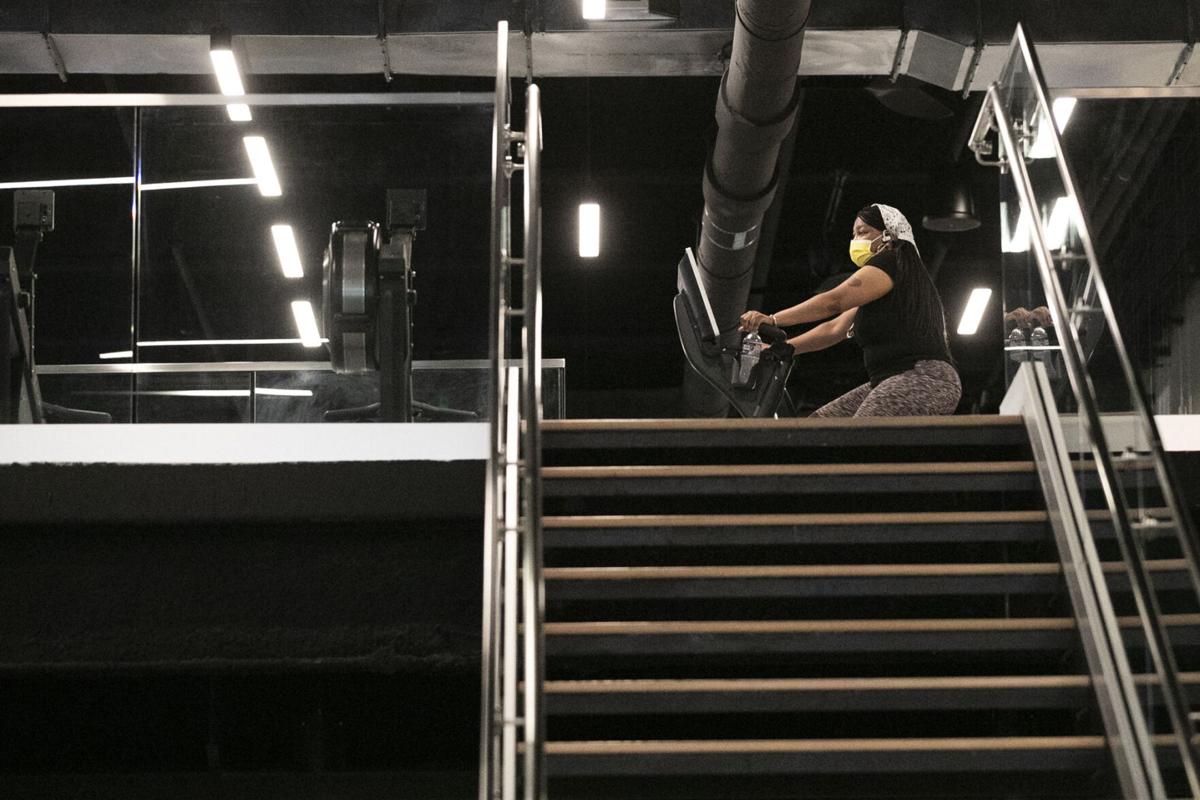 Janelle Whiting wears a mask while working out at City Fitness at 12th and Market Streets on Friday, June 11, 2021 in Philadelphia. (Heather Khalifa/The Philadelphia Inquirer/TNS)

U.S. workers bothered by the Quarantine15 aare looking to lose weight before heading back to office life. Dreamstime/TNS

Janelle Whiting wears a mask while working out at City Fitness at 12th and Market Streets on Friday, June 11, 2021 in Philadelphia. (Heather Khalifa/The Philadelphia Inquirer/TNS)

Jesse Weigel’s jeans barely buttoned and his dress pants were off limits. But he didn’t view his pandemic doughnut habit as a crisis until his 4-year-old had to extract him from a once-favorite shirt that bound his arms like sausage casing.

“She’s actually hanging off my collar trying to get my shirt off,” Weigel, a 35-year-old computer-systems head engineer, recalled from his home in Steubenville, Ohio. “The only way to do it was to rip it off my arms.”

Americans who soothed themselves with calorie-laden comfort foods are frantically trying to slim down for the perfect office bod. Gym memberships are up, personal trainers are booked and digital subscriptions to WW, the company formerly known as Weight Watchers, were 16% higher at the end of the first quarter from a year earlier.

The pandemic-fueled isolation and anxiety meant more eating and less activity in a country where four in 10 adults are already obese, according to the U.S. Centers for Disease Control and Prevention. In all, 42% of the population gained unwanted weight, averaging 29 pounds, according to the American Psychology Association’s annual stress survey. As COVID-19 swept the globe, obesity was among the conditions that put infected people at greater risk.

Some companies saw opportunity in what was labeled on social media as Quarantine15 and PandemicPounds. Tracking virus outbreaks alongside stay-at-home restrictions, Hershey Co. pushed s’mores, the gooey confections of chocolate, marshmallows and graham crackers.

“What more perfect occasion than to share s’mores with the family over the backyard barbecue?” Michele Buck, the company’s chairwoman, president and chief executive officer, said at the May 17 annual general meeting. “We altered our media and increased media in those markets where s’mores was starting to increase in consumption.”

Even executives for Ralph Lauren Corp. — a company built on a fantasy of exclusive lifestyles, with clothing paraded by impossibly slim models — relished how its elasticized denim accommodated customers’ new curves.

“More comfort, stretch, is playing right into the lifestyles or the Covid weight gain,” Jane Nielsen, the chief operating and finance officer, said in a June 17, 2020, call with during an Evercore ISI Research. She, too, had put on pounds, she added.

All that heft creates a minor crisis for employees re-entering human society.

As of late May, 12% of Manhattan office workers had returned at least part time, according to a June survey by the Partnership for New York City, a research and advocacy group. Businesses surveyed expect that figure to reach 62% by the end of September.

In recent weeks, new clients of Own Your Fitness, a personal training service in Manhattan and Jersey City, N.J., have said they want not only to lose the pounds, but also to tune up for a corporate environment, according to founder Adam Dare.

“They started saying, ‘I want to look like I’m still competitive and I can handle my own,’” said Dare, 45, who conducts in-person and virtual sessions.

The downfall of Saumil Kapadia, a 41-year-old banking chief operating officer from Jersey City, was the aroma of his wife’s baking, luring him far too often from his bedroom workspace into the kitchen. Banana bread was a gateway to chips and croissants from neighborhood shops.

Now he’s doing 30-minute sessions with Dare, including running, lunges, squats and push-ups, working toward the day when he can slip into office clothes.

“Going back to work, you’re going to have two sets of people — one who completely transformed and others who have let it go,” Kapadia said via telephone. “I want to be back where I was prior to the pandemic.”

In suburban Atlanta, Carolyn O’Neil, a dietitian, author and onetime CNN correspondent, watched a friend lose 55 pounds by walking when his gym closed. Meanwhile, O’Neil — first to acknowledge that she knows better — went up a dress size and then some.

“The binge TV-watching and the binge eating went hand in hand,” said O’Neil, 65. “You didn’t have to go to the office tomorrow, so you were rebelling against the world with another episode of ‘Ozark.’”

The weight came off when she cut portions and traded wine and cocktails for fruit-infused water. “Passive exercise” is now routine: push-ups in a standing position against a kitchen counter, putting away household items immediately rather than piling them near stairways for later.

“Don’t be hard on yourself and don’t worry about one pound up, one pound down,” she said. “Look at changes that are going in the wrong direction.”

Around the country, more than 500 people have joined a free fasting program, via text, from Fairview, Texas-based Tolleson Health Advisors. The approach — including tips and links to 30- to 60-second videos — appeals particularly to those who realized that new weight puts them at risk of early death, according to company founder Shawn Tolleson, a 33-year-old retired pitcher for the Los Angeles Dodgers and Texas Rangers.

“I’m not selling you anything,” Tolleson said. “It’s better than free. I’m saving you lots of money on food and increasing your productivity because you’re not forming your day around these three meals that you don’t have to eat.”

Weigel, the Ohio dad who was trapped in his dress shirt, joined a gym after his daughter described him as “long and fat” to a woman at church. “I think she meant ‘tall and strong,’” Weigel said.

The sauna is bringing relief to his ankles — aching and swollen, he said, from hauling the extra weight. Typically 200 to 210 pounds, he shot up to 240, and since has dropped 6 pounds. An in-person work event is coming up this month, and after that, travel to conferences. He prepared by spending $500 on larger-size clothing.

“I have three dress shirts right now that fit me,” he said. “Two pairs of dress pants.”