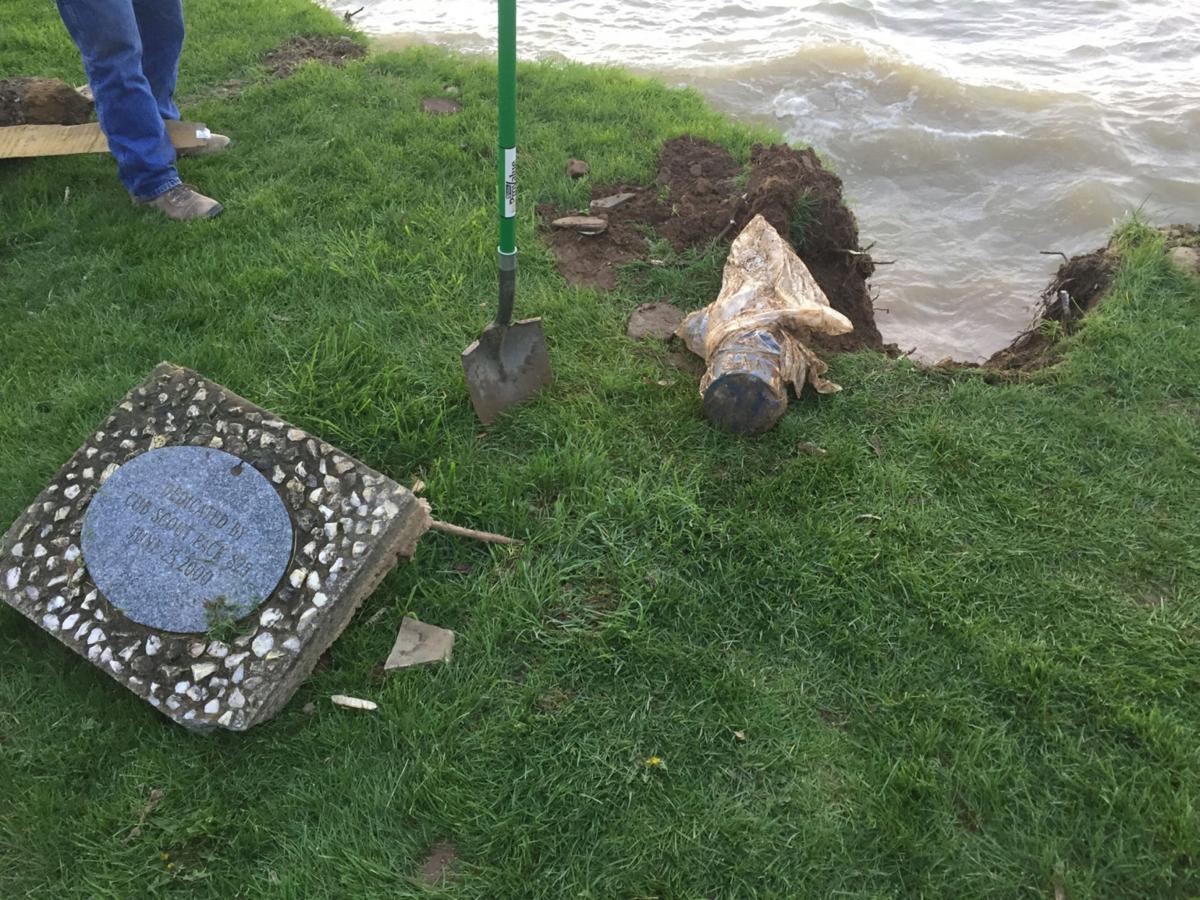 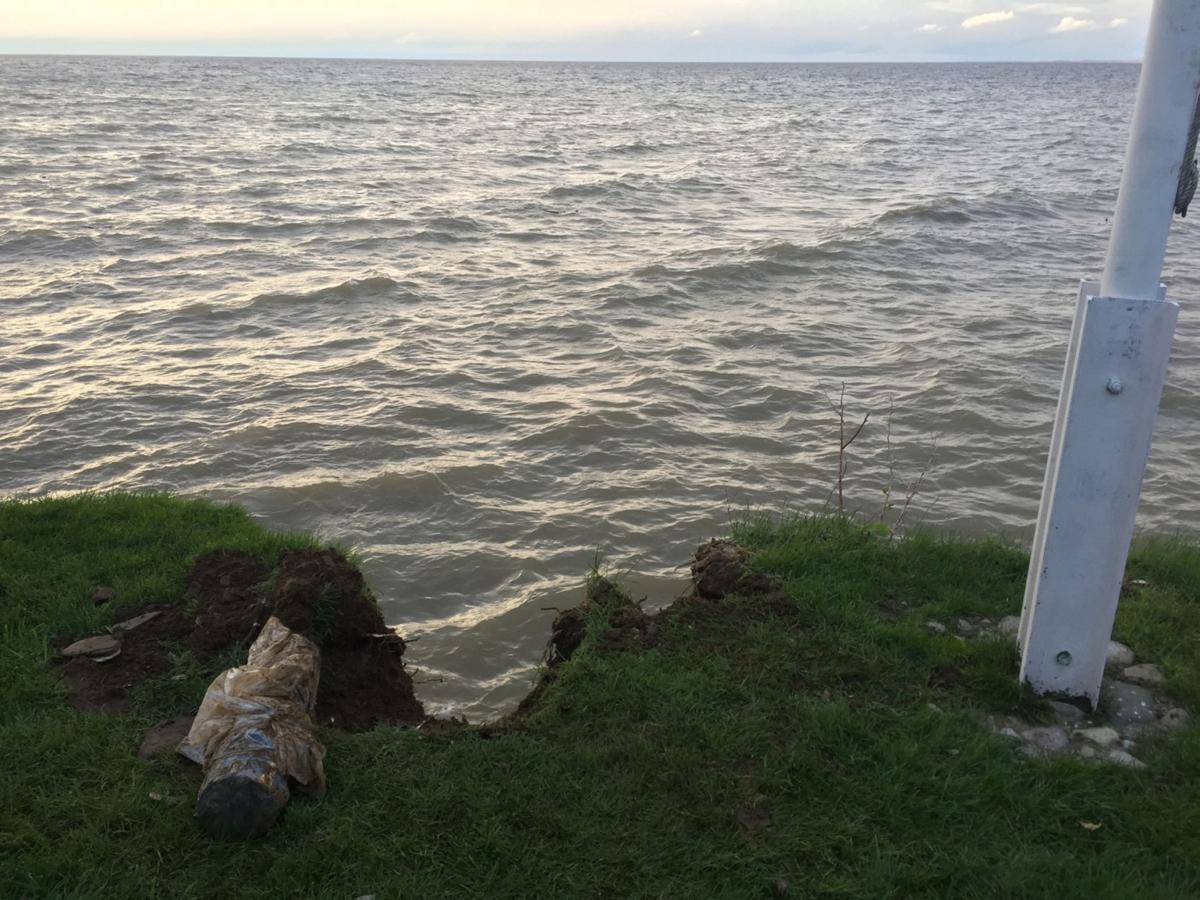 Time capsule dug up from original site in 2017. Photo provided. 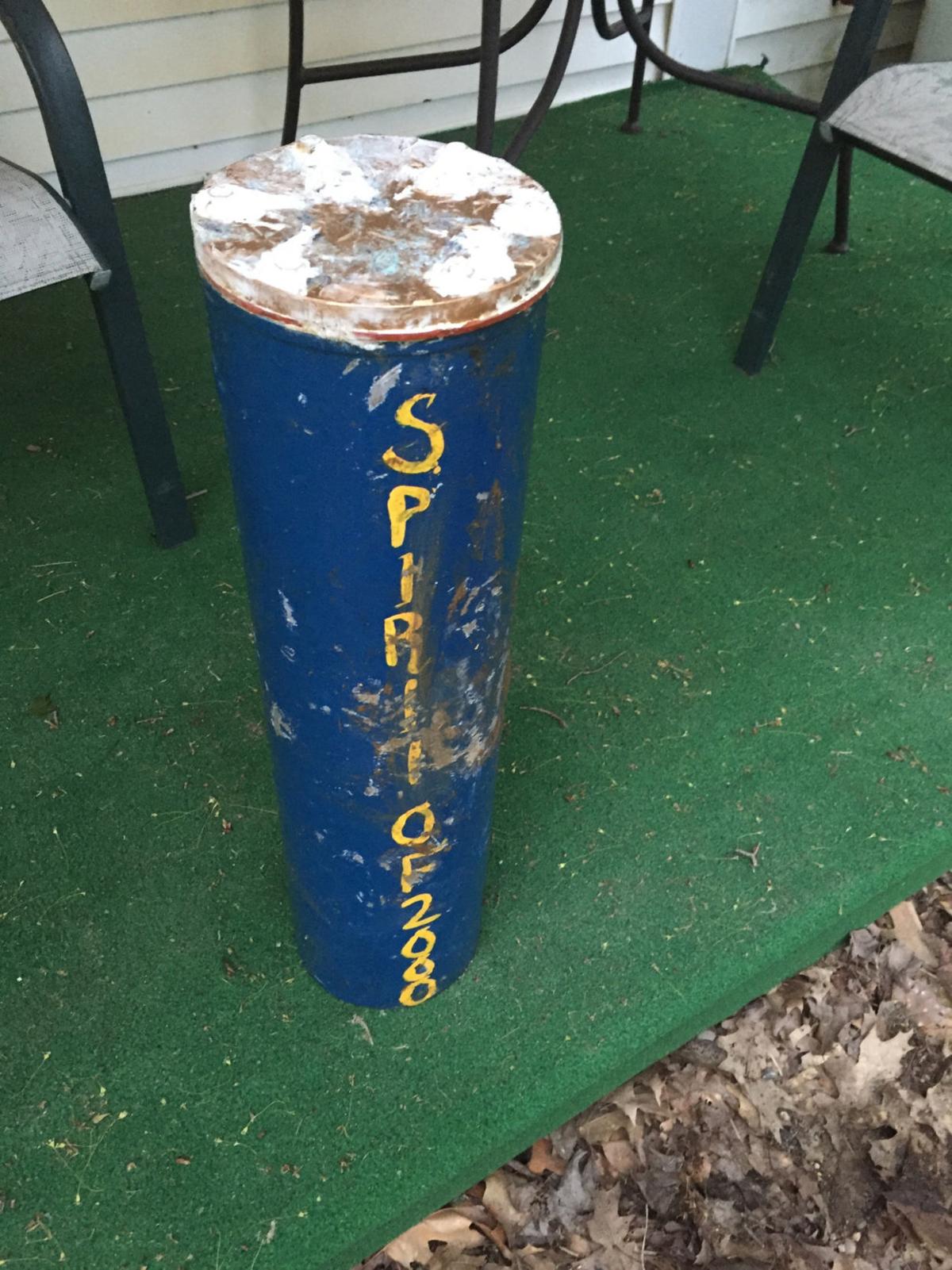 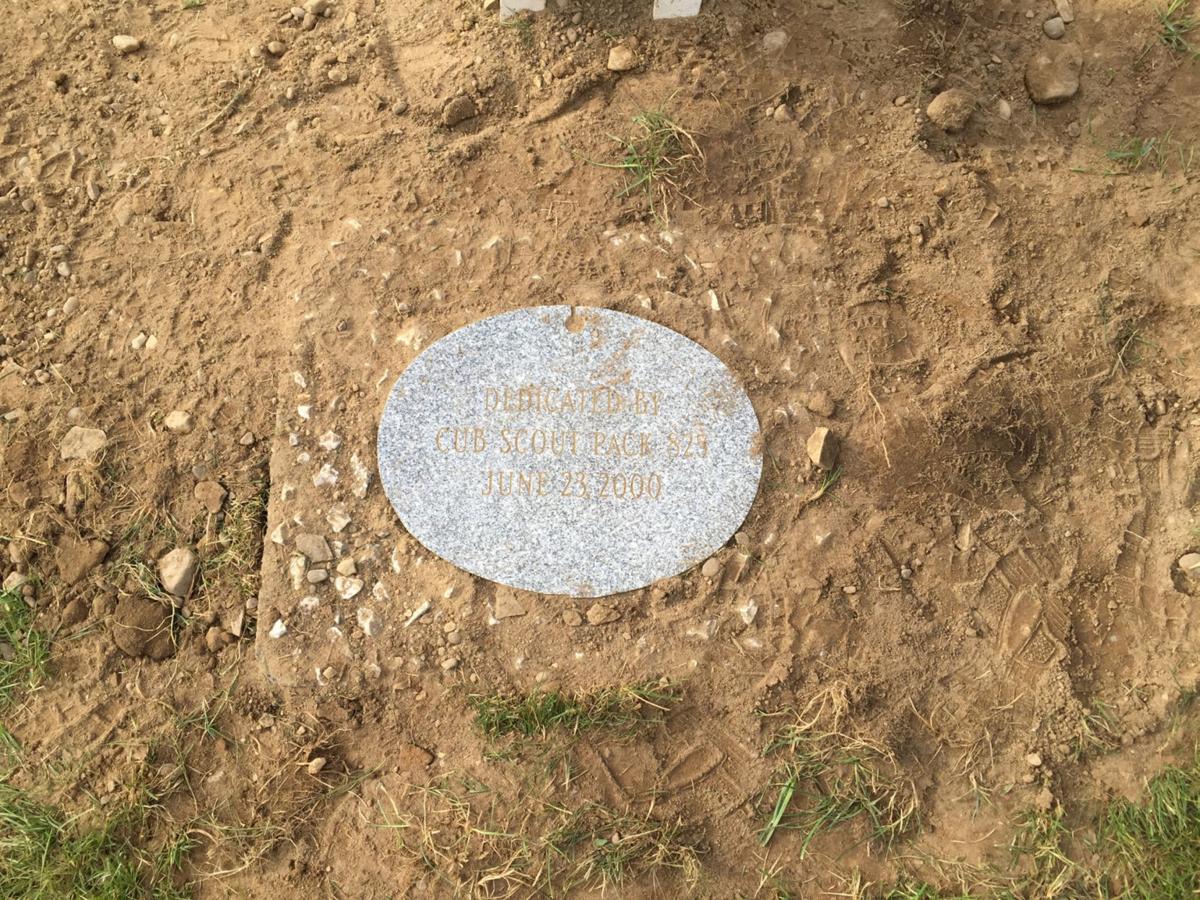 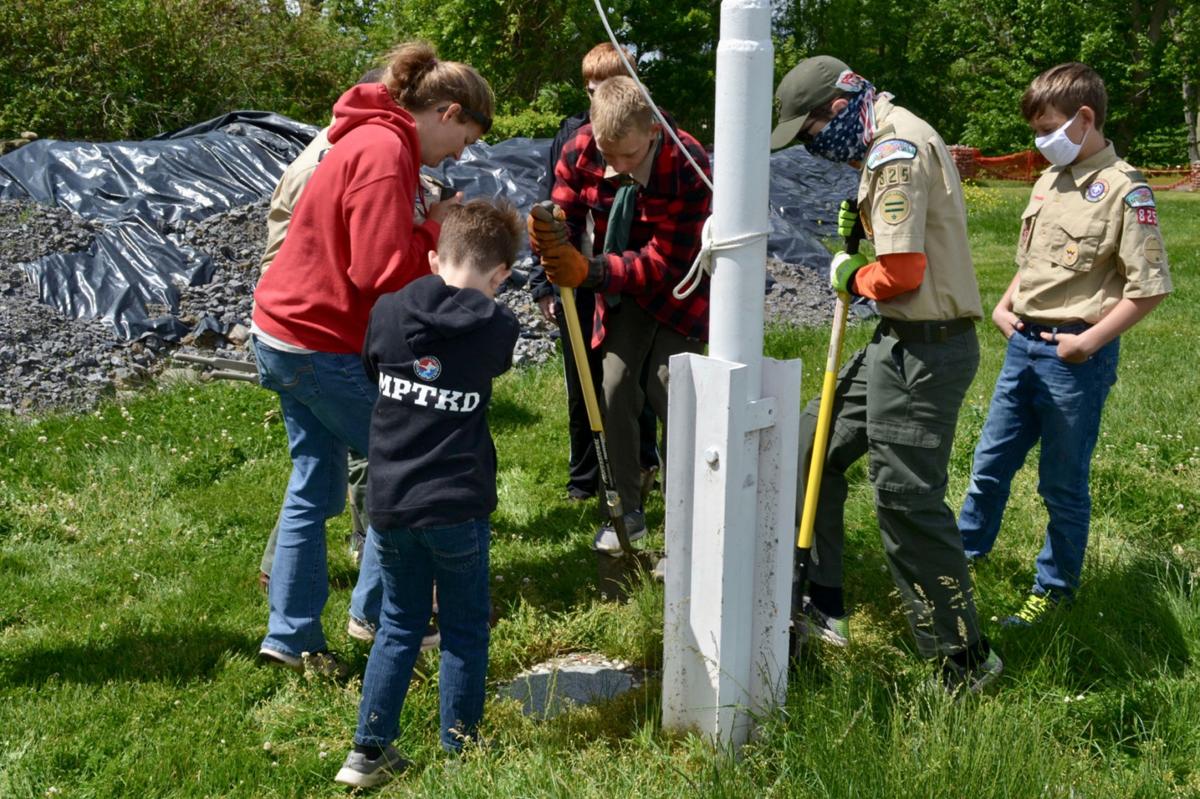 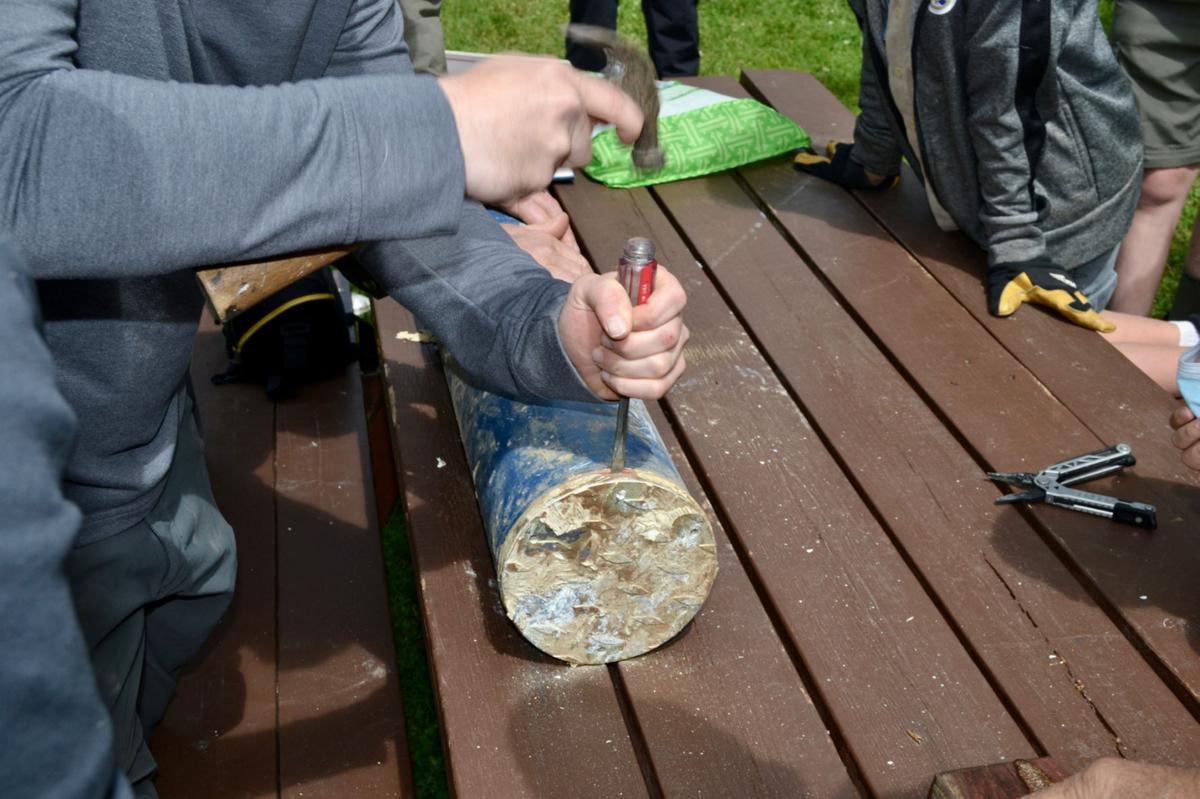 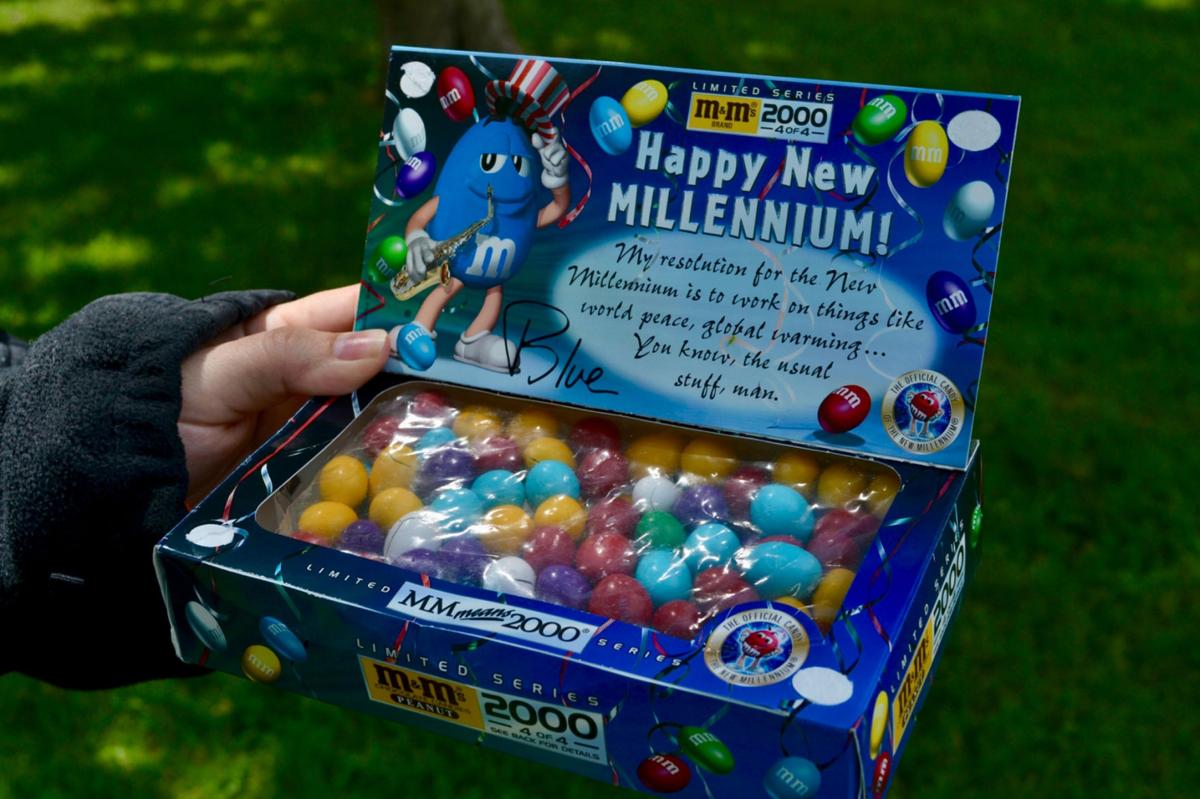 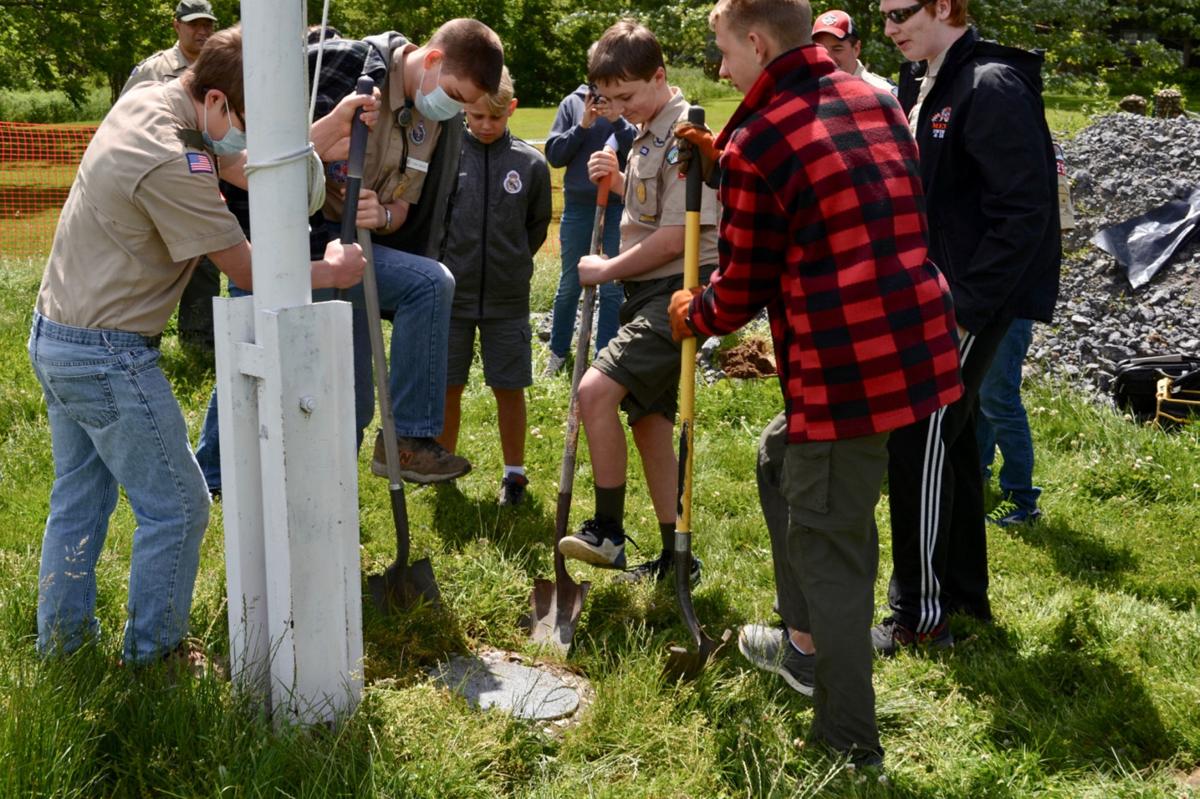 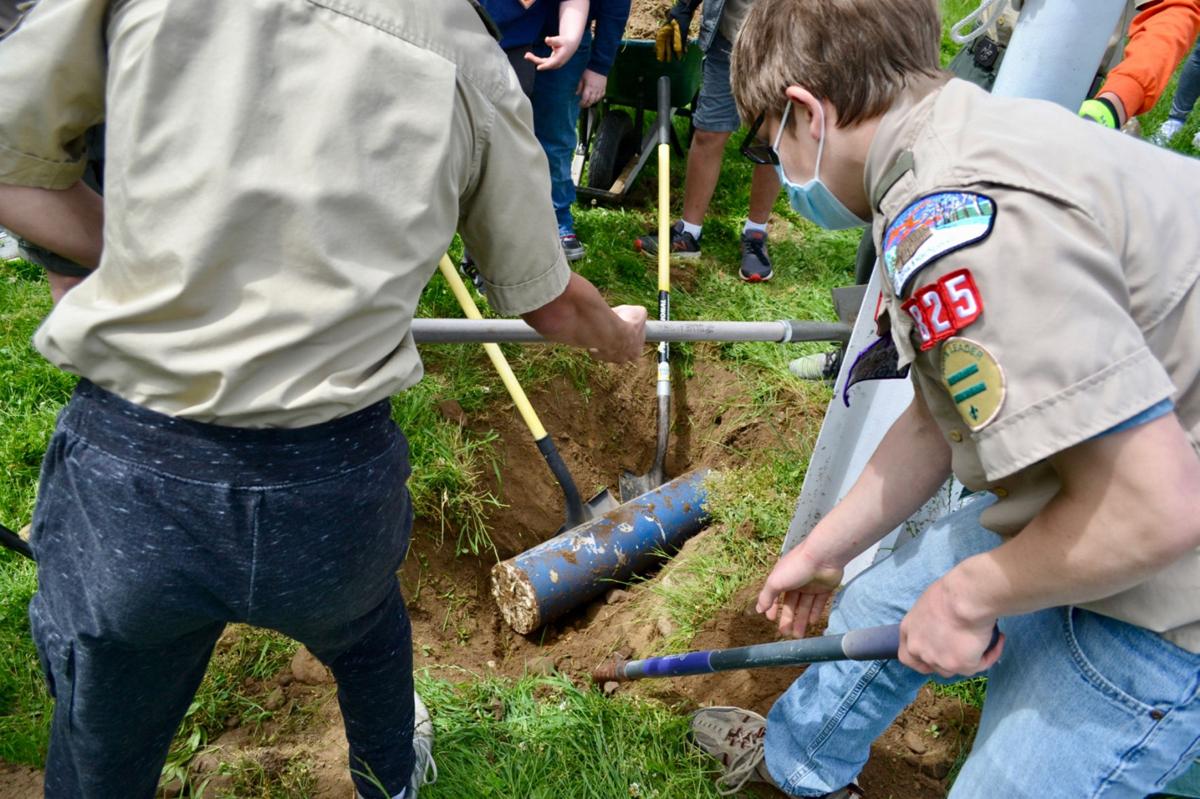 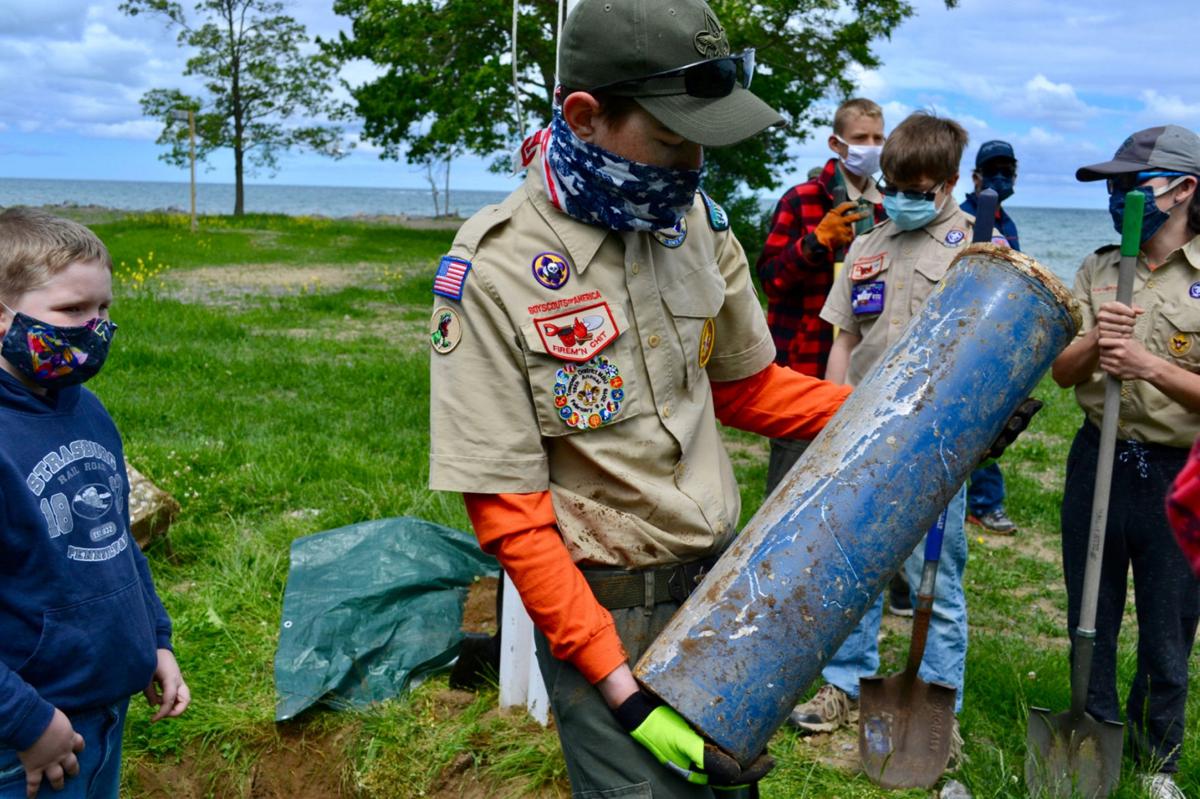 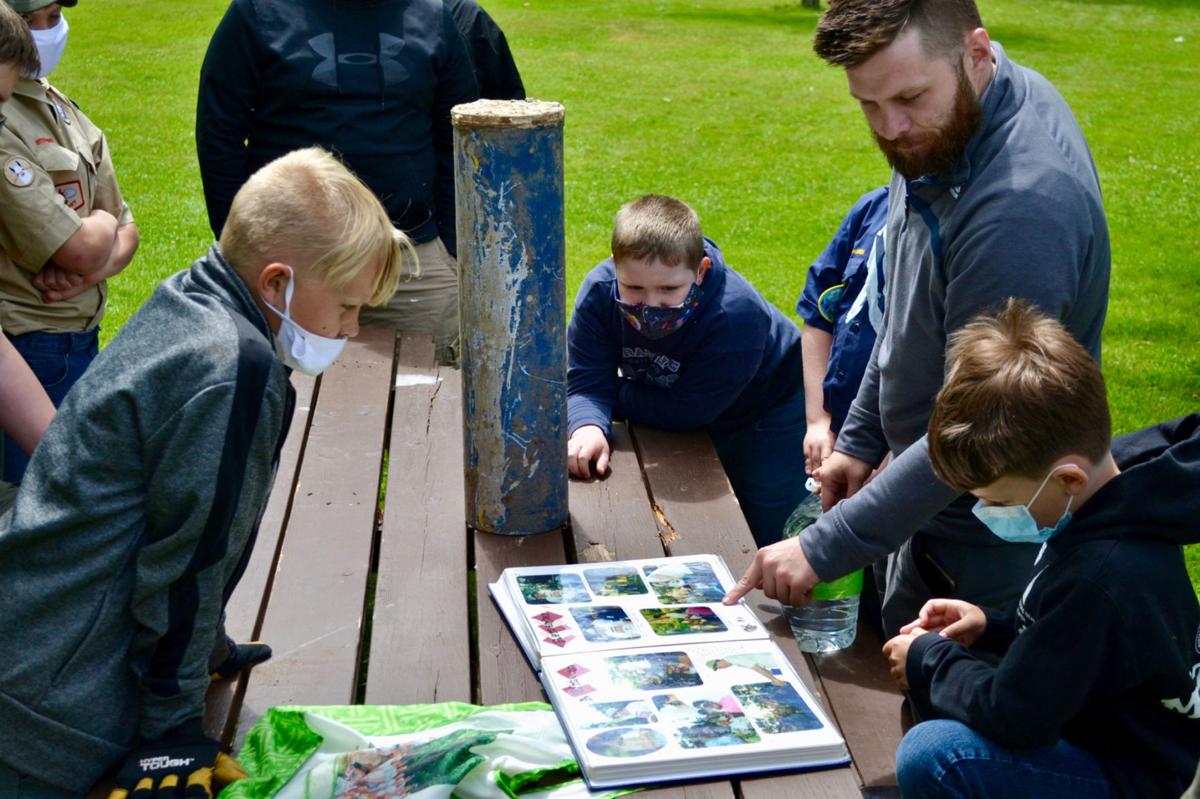 Time capsule dug up from original site in 2017. Photo provided.

MEXICO — Traditionally, time capsules are for distant future generations, as though they were messages from another world of long ago and far away. But 20 years ago, when Ken Sturtz was a 10-year-old Cub Scout, his troop leaders had a different idea, a 20-year time capsule they’d not only be able to bury, but would be able to dig up some day at the ripe old age of 30. It would allow them to look back and laugh at, to remember and to sigh at, of days long past and of their Cub Scout youth.

Everybody got to contribute. Lots of notes and letters. Sturtz put a patch in. Someone put in their pinewood derby car. Letters to your future self were a common favorite. Pokemon cards even made it in. Other, long forgotten objects would be future surprises.

The capsule itself was a piece of metal pipe about eight inches in diameter and about two feet long. Troop leaders got permission to bury it at Mexico Point Park.

Being Cub Scouts, they prepared this thing to withstand the Apocalypse. It was bolted shut and the bolts puttied over. No water was getting into this capsule. But we’re talking Cub Scouts here. So, the whole thing was further put inside two plastic garbage bags. Can’t be too prepared.

“They did everything you could think of to keep the weather out,” Sturtz said. “It was all painted up in Cub Scout blue and gold.”

They dug a five-foot-deep hole five paces from the flagpole, put the capsule down into it, and steel-rebar-secured a cement marker over the top engraved with the date it was put in the ground by Cub Scout Troop 825.

“What made it so special,” Sturtz said recently, “was that a lot of time capsules, people plan to open them in 50 years or 100 years, and I’m sure most of the people that put things in the time capsule are long gone. Statistically, most time capsules are not opened. People forget about them, forget where they are, or it’s in a building, or it’s been paved over, or just forgotten. So, we had a marker on the thing. It was five paces from the flagpole, and we were going to open it in 20 years when the Scouts were in their 30s and the adults, the parents and leaders, were in their 60s.”

Of course, that seemed so unimaginable then, Sturtz said. Twenty years. To a boy of 10, you might as well have said 100. Well, he didn’t have to wait that long, in fact, he didn’t even have to wait the 20 years.

“I’d been up to the park many times, thought about it many times,” Sturtz said, “but didn’t give it a lot of thought until a few years ago in 2017, when there was a lot of flooding on the lake and a ton of erosion, particularly at Mexico Point. There used to be more of a point at the Point than there is now, but it still juts out into the lake a little bit, and so, the area took a particular beating. It had been eroding for a long time, but it finally got to the point where the lakeshore reached where the flagpole was. The flagpole hadn’t been moved in 17 years, and we realized one night, my dad and I, that the time capsule was buried right next to the flagpole. And so, we went up there with shovels, and the time capsule was almost uncovered. We had to dig down a little bit, and we finally got a hold of it. It was partially uncovered on the lake side. And we managed to get it out before it went into the lake. It was not pleasant weather. I remember that. It was very cold and windy. So, we got the thing out. The flagpole they ended up having to take down, and they moved it back, farther away. They took the fencing and the flagpole down, ‘cause the whole shore just crumbled. At any rate, we brought it home, were tempted to open it, because, you know, curiosity, we couldn’t really remember exactly what we put in it, but we didn’t.”

So, sure enough, that summer, July of 2017, the flagpole, moved inland, was put up again, and the present version of Scout Troop 825 “had a little ceremony, re-buried the time capsule, and put the little stone marker back on top,” Sturtz recounted. Now, 20 years later, “it’s pretty exciting to take a peak back.” Of course, the second round of digging the thing up required another ceremony which proved a little more difficult than the replanting ceremony of 2017 did. Sturtz had lost touch with some of the original Cub Scouts of 20 years ago over the years, and COVID made planning an event even harder. But, through the miracle of Facebook, Sturtz was able to get in touch with a fair number of those who’d originally been there 20 years earlier. Looking for photos of those days to help him in his search, Sturtz couldn’t find any on his computer. Then it dawned on him. Those were the days of film. Oh, the cruelties of time.

And so, the long-awaited day finally came. And they dug, and they dug, and they hauled that hunk of metal out of the ground. And now, the moment they had all been waiting for was here. All they had to do was open it. Oh. Right. Remember how you sealed it to withstand the Apocalypse? Well, maybe next time you bury this thing, you’ll bury a wrench next to it, ‘cause no one at this ceremony had one. So much for that old “Be Prepared” motto.

Ken’s father came up with a wrench and some other tools. The capsule was so tightly sealed, Ken said, it sucked air when the top was finally broken free. And what was inside?

“It was all was just the way we left it,” said Sturtz.

Inside the capsule: the 2000 winning pinewood derby car, an old Boy Scout cap, photos, Polaroids, coins, patches, the Pokemon cards, a floppy disk, a roster of the Scouts in the pack, some special edition millennium M&Ms, 50 state quarters, an ad for Road Runner high-speed internet, a New Year’s Eve party hat, a letter mentioning the Y2K scare, the front page of the Mexico Independent, and predictions from experts on future, almost all of which were wrong.

Also inside, everyone had filled out a sheet with his favorite foods and hero. Sturtz’s hero was Davy Crockett. Somehow, he’d forgotten that. I didn’t ask whether his hero had changed since then. I mean, why would it?

And then there was this:

“Somebody put in a little tiny pocket calculator, like a really small one,” said Sturtz, “and for some reason, they left the battery in, which when you bury things in a time capsule, like an old phone or a calculator, you’re supposed to take the batteries out so they don’t leak all over. For some reason, whoever put it in there left the batteries in this tiny, little, like the size of a matchbook, little pocket calculator. I pushed the on button, and the thing still worked.”

Reminded me of an old Woody Allen movie. He’s frozen for 100 years, comes back, finds a 1960s-era Volkswagen Beetle with the keys in it in a cave. He turns the key. It starts right up.

And so, on to the future. What have they in mind?

“The plan is to take pictures of everything. We’d like to keep it together,” said Sturtz. “We’re going to try to re-bury it in the fall, and let the Cub Scouts and the pack pick some items out to bury, and put in items of their own. We thought it would be sort of fun to put it in the ground again and set the timer for another 20 years. Twenty years seems long enough that it’s exciting to see how much things have changed, but not so long that no one’s around to enjoy it.”

They’re not sure where they’ll bury the next one, Sturtz said. Probably not so close to the lake.