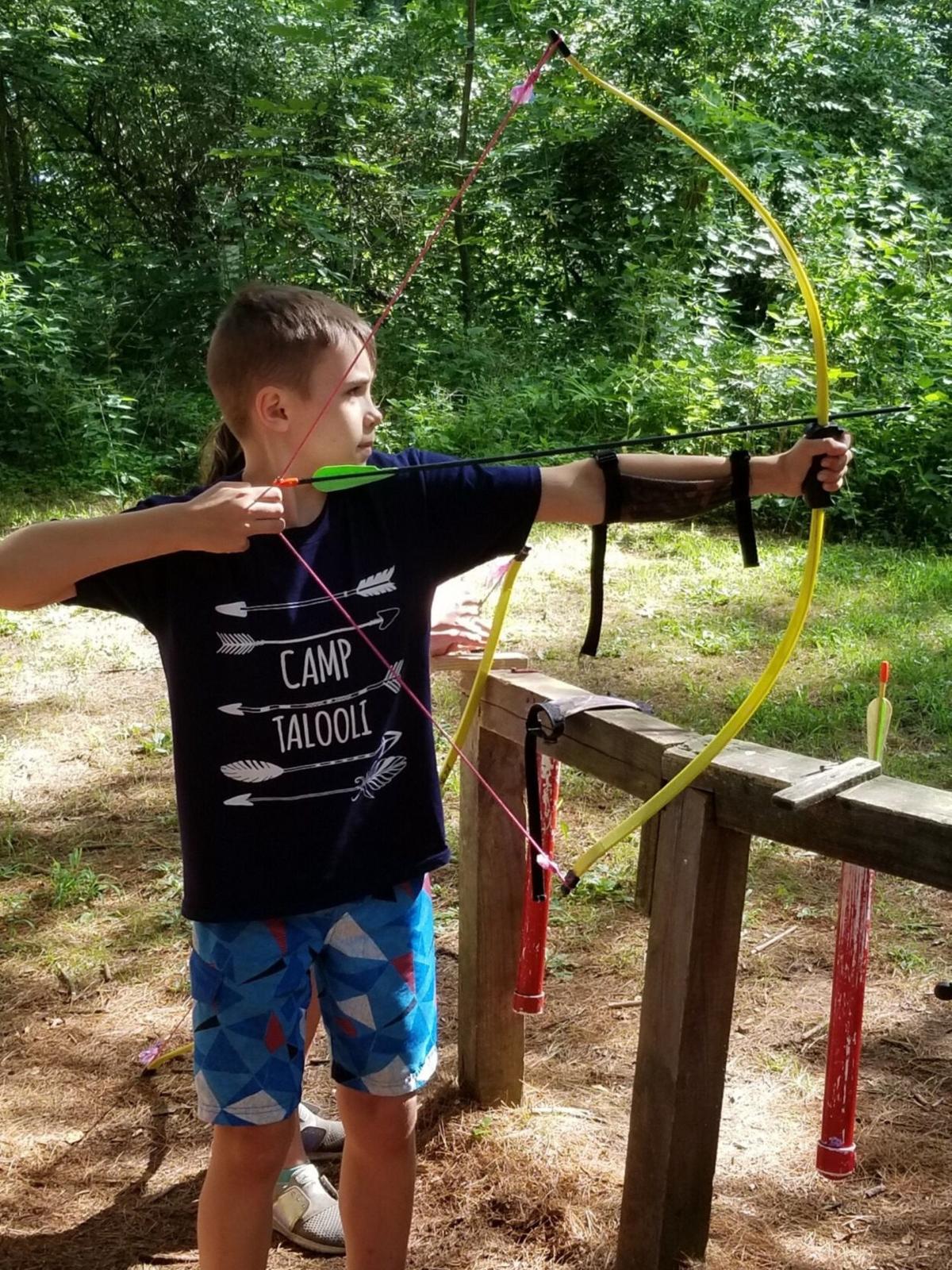 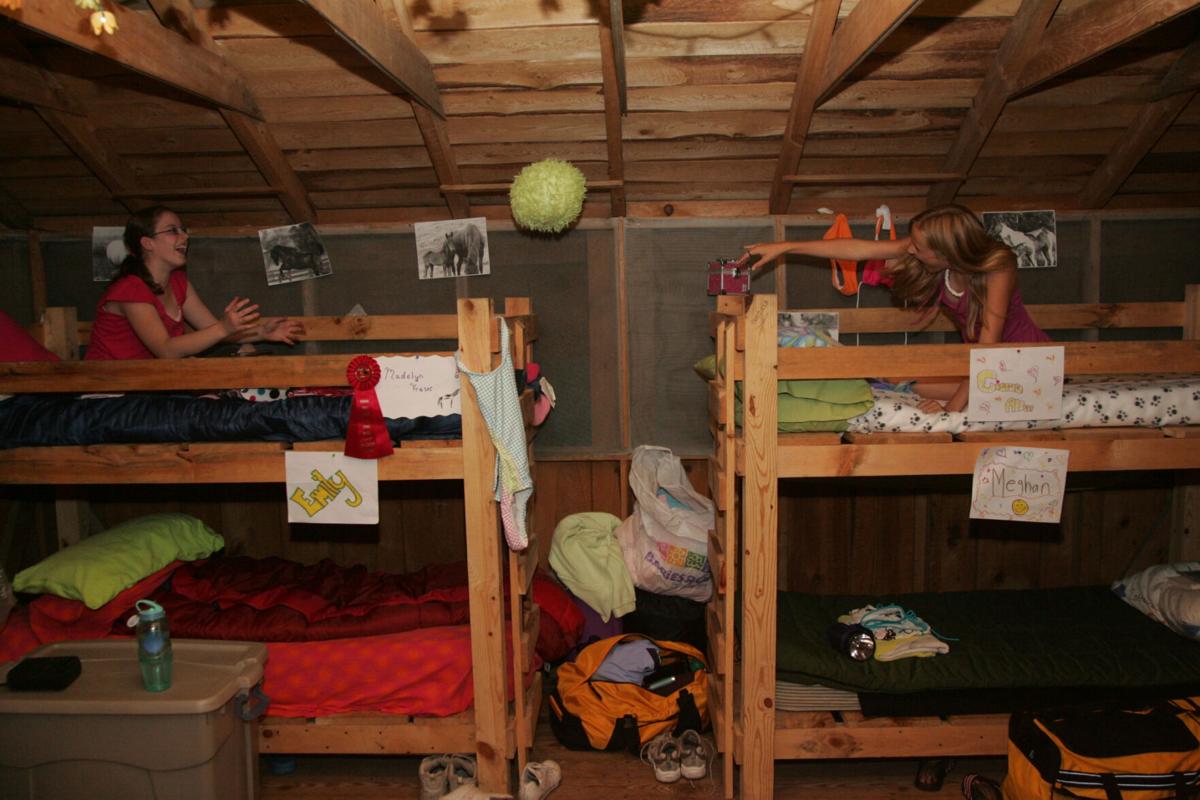 Two girls play catch in their bunks in either Kema or Eluta sleeping areas. The cabins originally had army cots, but bunks were built in the 1990s. 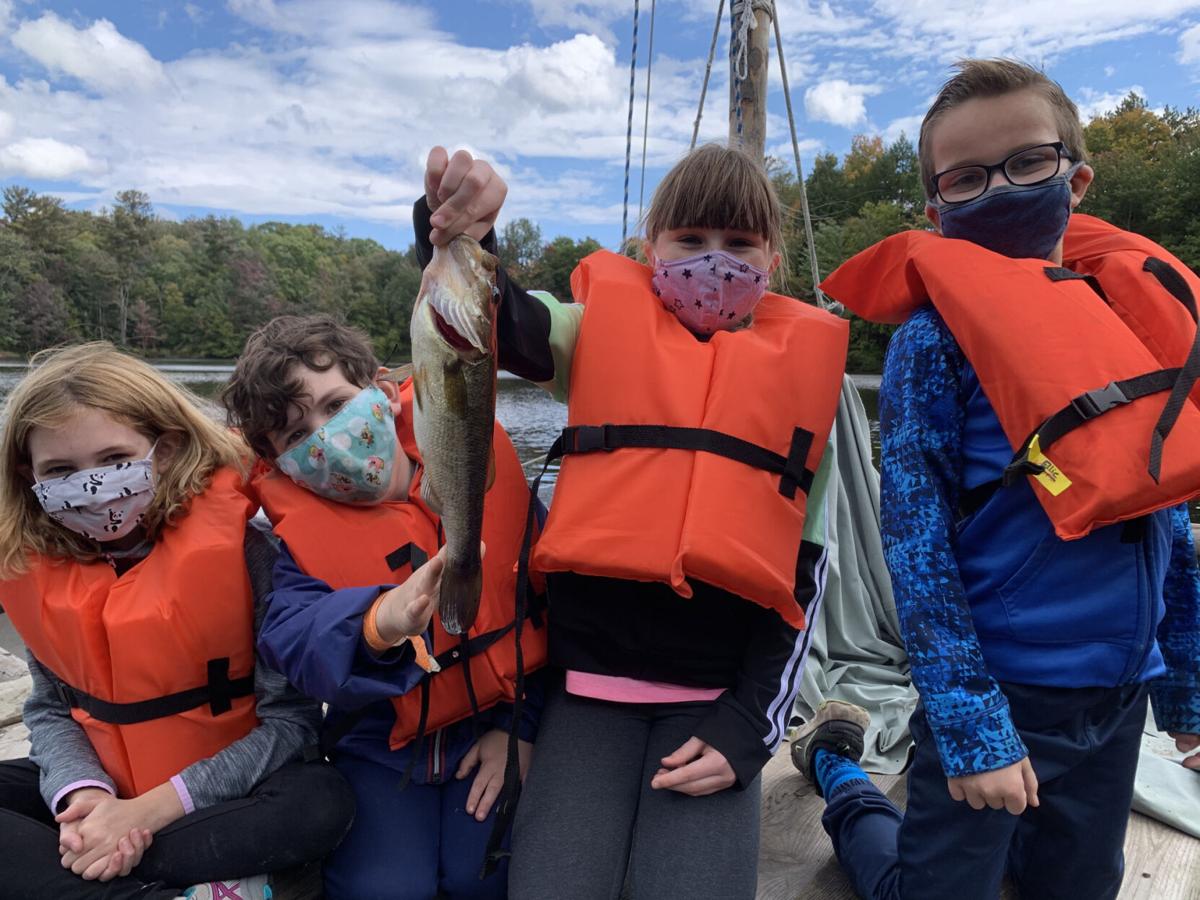 Campers with their catch this year at Camp Talooli. Lake Temalo has perch, catfish, bass, bluegill, sunfish and crappie. 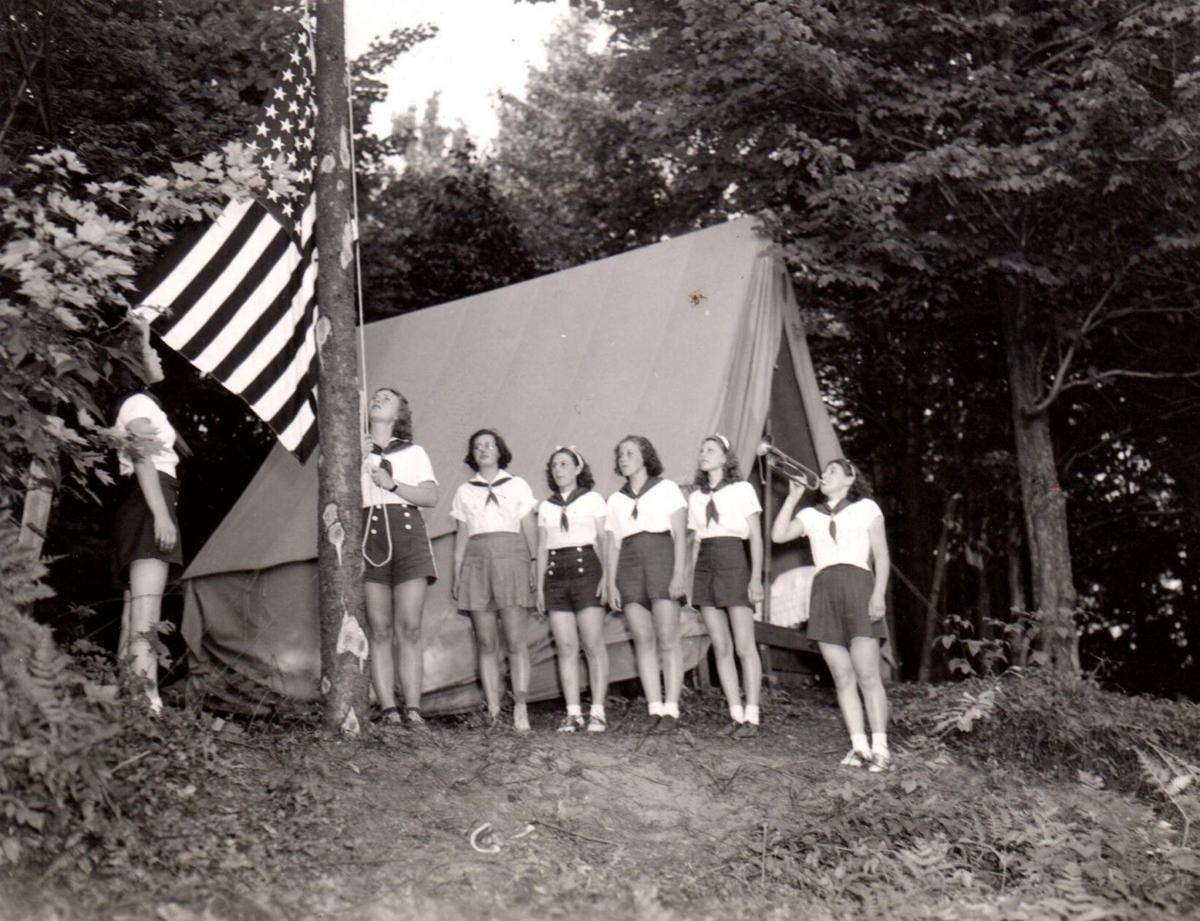 Girls raising the flag at the beginning of camp in the 1950s. Notice they are wearing the Camp Fire Girls white shirts and bandanas. 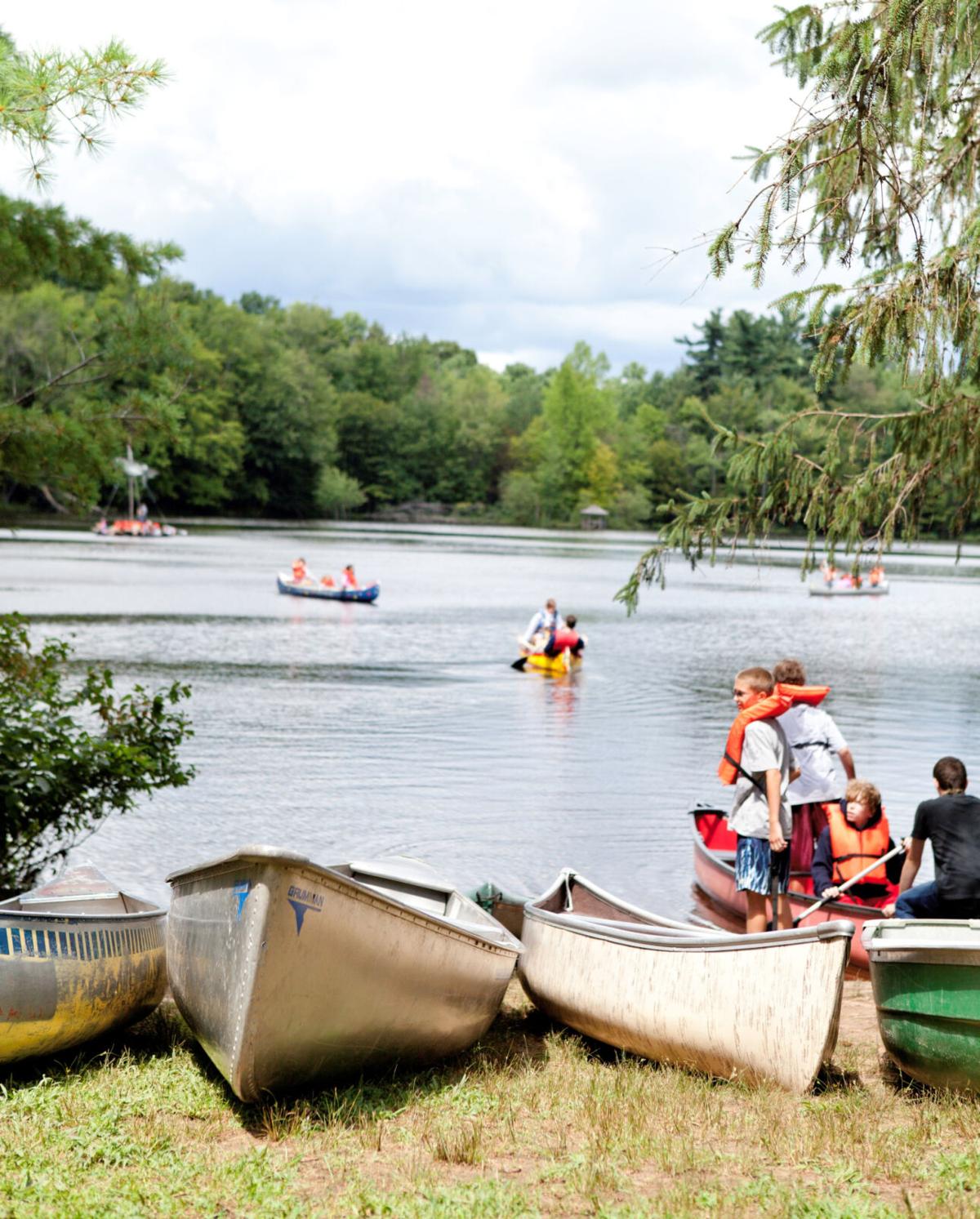 Two girls play catch in their bunks in either Kema or Eluta sleeping areas. The cabins originally had army cots, but bunks were built in the 1990s.

Campers with their catch this year at Camp Talooli. Lake Temalo has perch, catfish, bass, bluegill, sunfish and crappie.

Girls raising the flag at the beginning of camp in the 1950s. Notice they are wearing the Camp Fire Girls white shirts and bandanas.

SCHROEPPEL — Seventy-five years ago, bunches of girls and young ladies descended onto a rustic area of the town of Schroeppel to embark on a new adventure – summer camp.

During the next few weeks, they would swim, canoe and boat in Lake Temalo, hike the many trails through the woods and learn about animals, insects and fauna. They would sleep — probably for the first time — in cabins and teepees. They would learn new skills like archery, take part in races and other competitive games and try their hands at arts and crafts.

They would make campfires and sing silly campfire songs. They would savor the taste of that delectable camp confection named s’mores.

But most of all, they would make friends.

“I would cry when my parents came back to get me!” said former camper and counselor Gale (Quilter) Guerrieri, who now lives in Maryland. “I looked forward to going back each year — from a Bluebird, to Camp Fire Girl, horizon club member, counselor-in-training and counselor. I was in high spirits each time I returned.”

Camp Talooli, a long-time part of life in Pennellville, Oswego County and Central New York, for decades was the camp for the Camp Fire Girls organization in the region. In 2017, the 170-acre site was sold by Camp Fire Inc. to a nonprofit group with Jan Peneston as executive director.

The Penestons still operate a summer camp at Camp Talooli for girls and boys, giving children the chance to do many of the activities Camp Fire Girls enjoyed all the way back to the mid-1940s.

Unfortunately, the 75th anniversary year for Camp Talooli didn’t quite go as planned. Jan Peneston said all sorts of special events were planned for day camp and residents camp during the summer of 2020. A huge celebration was set for Aug. 15 in which camp alumni from across the country were invited and a new building at camp was to be unveiled.

But COVID-19 had other plans.

Summer camp did proceed once the state lifted its closure orders for day camps in June. This put Peneston and her staff in a rush mode to come up with all that needed to be done at Camp Talooli to open day camp and ensure everyone remained safe from COVID.

“The drop off and pick up of kids was changed,” she said to keep social distancing. In the past, buses came and unloaded kids in one area. For 2020, parents had to bring their children to camp in 15-minute intervals. The same occurred for pick up at the end of the day.

“And we had to keep kids separate,” she said. So, there weren’t large group hikes on the trails. “We were moving in small groups,” Peneston said. There weren’t huge groups swimming at one time. When campers ate at picnic tables, every table was thoroughly sanitized after each group left. All other items used by children also were sanitized after each use.

Everyone — staff, counselors and campers — all wore masks.

“We had about 100-120 kids each week, about a third of what there normally are,” Peneston said. “But the kinds were still learning and having a great camp experience.”

Camp Talooli began when the Camp Fire Girl council in Central New York rented land from Dean Betts. The council then bought the property — about 118 acres which originally was a farm — from Betts in 1945. Once the camp was developed over the years, one of the two large lodges on the property was named Betts. Betts Lodge burned down in 1986, but was rebuilt.

“I remember winter camping at Betts lodge and having all the orange juice and water freezing solid in our Igloo coolers overnight,” said Susan (Terry) Harshfield, a former camper and counselor now living in Seattle.

The other lodge, which was just a little bit inside the front gate, was named Duff, named for Jack Duff, a major benefactor to the camp.

Right past Duff is a small hill leading down to beautiful Lake Temalo. Lots of kids spent lots of hours canoeing, swimming, boating, sailing and kayaking on this lake.

“I remember swimming across Lake Temalo and hoping the snapping turtles don’t take off a toe,” Harshfield said. “I also remember teaching campers how to canoe and sail with you as lifeguard.”

That’s right readers. Yours truly was a camper at Camp Talooli and worked there as an archery instructor and lifeguard. That was many, many moons ago to be sure (early 1970s).

“In the 1980s, there were eight Camp Fire councils in New York state,” Peneston said. “In 1990, the only council left was us.” After a while, the council decided to divest itself of assets and Camp Talooli became a stand-along operation run by the Penestons.

Since that time, Jan Peneston said she and her staff have been trying to add more activities for children to do during camp time. They also began to make improvements to bring in more people to the camp and make it available to the community year-round.

The leadership embarked on the first large construction project in years, building an 8,000 square foot two-wing educational building across from the existing Art Barn and ballfield and overlooking Lake Temalo.

The building is being named Nokomis Lodge, with the name taken from a famous poem by Henry Wadsworth Longfellow describing the story of Hiawatha. According to the Camp Talooli website, In the poem “Nokomis is Hiawatha’s grandmother and a figure that represents wisdom and comfort.”

Peneston said Nokomis Lodge will be available for camp activities and will be able to be rented by organizations, church groups and others for conferences and retreats. It will have an office, conference rooms, a service kitchen and can even “sleep 24 kids on each side,” she said.

“With this, we will be able to bring in revenue 12 months a year,” Peneston said.

A lot of the work on Nokomis Lodge is being done by volunteers, along with help from contractors. A ribbon-cutting for the lodge was supposed to be held during the alumni and anniversary celebration Aug. 15, but of course, that was postponed.

Peneston said she hopes if the COVID situation comes to an end, perhaps the alumni reunion and camp celebration can be held in summer 2021.

In the fall, Camp Talooli also welcomed children who were doing virtual schooling through their computers. Peneston said children came to camp, did their school work with their teachers by computer and also had access to the camp for fun, recreational outdoor activities.

Peneston and her staff are gearing up for another season of camp in 2021 and hope if COVID goes away to again have resident camp (in which children come and stay an entire week instead of going home each day).

Camp attendance has had its ups and downs through the years, but in 2019, Camp Talooli hosted about 1,600 kids in July and August. Contrast that with 300 to 400 campers coming in the summers in the 1980s.

“Our job is to make sure Talooli is here for another 75 years,” Peneston said.