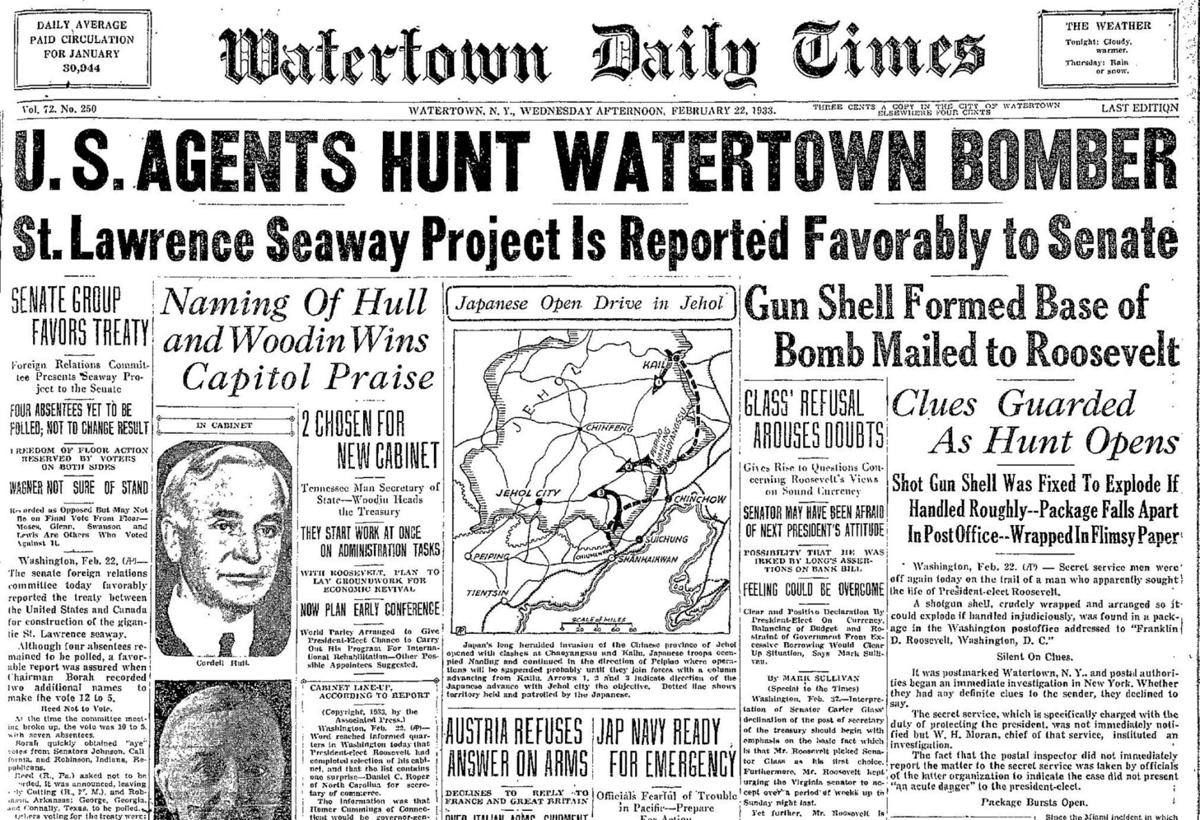 In 1933, days before the inauguration of Franklin D. Roosevelt, federal officials sought information after a crude bomb addressed to FDR was postmarked in Watertown. / Watertown Daily Times 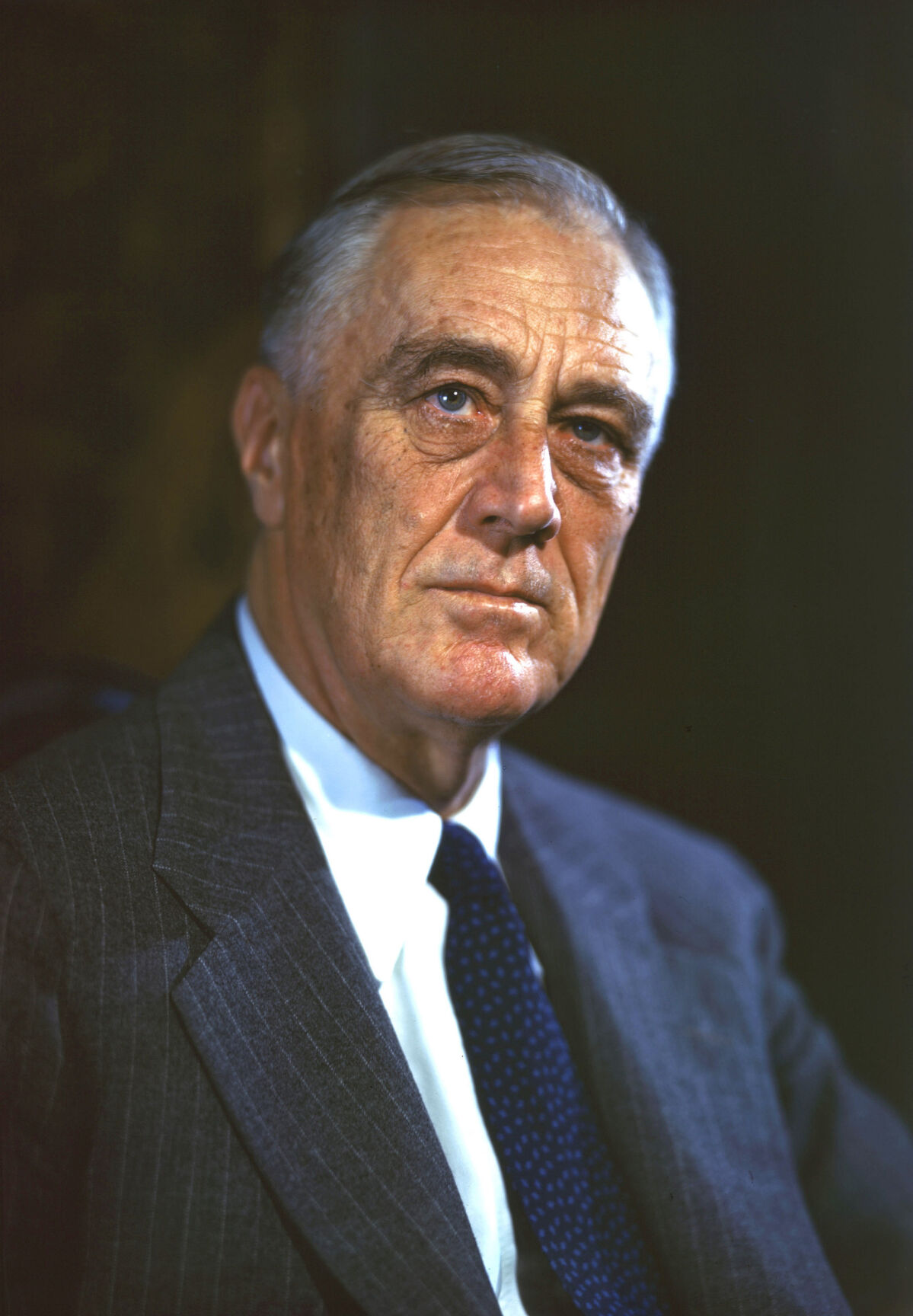 Franklin D. Roosevelt was the last U.S. president to be inaugurated in March. Wikipedia

In 1933, days before the inauguration of Franklin D. Roosevelt, federal officials sought information after a crude bomb addressed to FDR was postmarked in Watertown. / Watertown Daily Times

Franklin D. Roosevelt was the last U.S. president to be inaugurated in March. Wikipedia

Franklin D. Roosevelt’s inauguration speech of 1933, during the height of the Great Depressi…

The security for Joe Biden’s inauguration as the 46th president of the United States on Wednesday will be extreme following the deadly Jan. 6 insurrection at the U.S. Capitol by supporters of outgoing President Donald Trump. The National Guard has been authorized to deploy thousands of troops to Washington, D.C., to safeguard the inauguration ceremony and the capital.

But those who protect the president realize danger can lurk elsewhere. One such case happened in 1933 when Watertown was the focus of clues after a crude and haphazard assassination attempt on the life of Franklin D. Roosevelt before his 1933 inauguration as the 32nd president of the United States at the height of the Great Depression.

Baylor O. Durant, who manages a history-related Instagram blog that focuses on Watertown, said she stumbled across reports of the incident while searching for local historic events at nyhistoricnewspapers.org. She posted a 1933 report by the Watertown Daily Times about the case on her blog.

“I just happened to come across it, and thought it was way too interesting not to share,” she said.

The Page 1, all caps headline in the Feb. 22, 1933 edition of the Watertown Daily Times blared, “U.S. AGENTS HUNT WATERTOWN BOMBER.”

The Associated Press story began, “Secret Service men were off again today on the trail of a man who apparently sought the life of President-elect Roosevelt. A shotgun shell, crudely wrapped and arranged so it could explode if handled injudiciously, was found in a package in the Washington post office addressed to ‘Franklin D. Roosevelt, Washington, D.C.’”

The package was postmarked in Watertown.

The Secret Service had been on heightened alert on threats to FDR following an assassination attempt in Miami. According to history.com, on Feb. 15, 1933, a deranged, unemployed brick layer named Giuseppe Zangara shouted, “Too many people are starving!” and fired six rounds at the president-elect.

“Roosevelt had just delivered a speech in Miami’s Bayfront Park from the back seat of his open touring car when Zangara opened fire,” according to the history.com site. “Five people were hit. The president escaped injury but the mayor of Chicago, Anton Cermak, who was also in attendance, received a mortal stomach wound in the attack.”

Franklin D. Roosevelt was the last U.S. president to be inaugurated in March. The U.S. Constitution originally directed that a president be inaugurated on March 4 of the year following a presidential election. FDR defeated incumbent Herbert Hoover in a landslide in 1932. The March inauguration date was used from 1793 to 1933.

According to Times’ files, the 20 gauge shotgun shell was found when its package tumbled from a mail sack and burst open. Post office officials speculated that the chances of it exploding were “about one in ten,” but said its explosion was a certainty if it were dropped “perpendicularly.”

The item was taken home for safekeeping by W.J. Satterfield, chief of the Washington division of postal inspectors.

The Times reported that the Naval Ordnance Bureau, which is usually charged with the destruction of such explosives, expressed doubt the shell would have had deadly effect even if exploded at close range. Also, the chances of the package making its way to FDR were slim due to inspections along the way.

But a manhunt began for the person who sent the package from Watertown.

“He appeared uninterested in the consequences of his acts and seemed content to let his fate run its course,” the Times reported.

His arrest came about “through the presence of mind” of Samuel Tyldesley, custodian of the vault at Jefferson National Bank, who saw the suspect lurking around the travel literature rack. Mr. Doldo went to the bank to procure a Seaboard Airline railroad folder. Mr. Doldo also sent letter to FDR and one of those letters contained a torn part of one of the folders, which police determined could only be obtained in Watertown at the bank, where officials were told to look out for suspicious characters.

“There is no doubt in my mind that Doldo was preparing to send another missive to President Roosevelt when he was arrested,” Chief Singleton said.

On June 22, 1933, Mr. Doldo faced two federal charges, one carrying a 20-year sentence. At his arrest, it was alleged he sent three “cartridge bombs” to the president. His arraignment included two federal charges of sending explosives through the mail and threatening letters.

Edward B. Teagle, Post Office inspector, said, “We don’t want to see this boy sent to a jail or prison. We are anxious to have him put in some kind of a hospital or institution where he will receive the proper kind of treatment and maybe he will be helped mentally.”

Mr. Doldo’s sister-in-law, Patsy Doldo, said at his hearing, “Joe would walk up town and go around the Square and then come home. He often attended the movies and it was there that he would learn about Zangara and others who were causing trouble. Joe has sometimes said after seeing a movie or reading about Zangara and such people, ‘I wonder what would happen to me if I tried those things?’”

It was also learned from postal inspectors at the hearing that Mr. Doldo had mailed letters “to concerns in the southern part of the U.S. and in Ohio, Pennsylvania and Maryland, in which he declared he would give them $500 if they would send a letter, which he would enclose in a letter to them, addressed to President Roosevelt. These letters were turned over to postal authorities in many cases and all of them were of a threatening nature.”

It was also alleged that on March 20, 1933, Mr. Doldo sent an envelope to Blair Laboratories in Lynchburg, Va., containing a letter that read, “Sir, will you deliver this to the president? I give you $500 if you will. Please, will you, I warn you!”

Police said the envelope also contained a letter to FDR containing a threat to take his life. The letter read, in part: “Hon. President Franklin D. Roosevelt, I am coming to Washington to visit you and this is the first time I’m going to be there. I am mad. Your (sic) to be murdered by this hand.”

On July 20, 1933, Mr. Doldo was sentenced to serve 16 years at the Chillichothe Reformatory in Ohio, a “farm prison without walls.”

He died at the age of 91 in 2003. His obituary said he worked for a time at Jefferson Rehabilitation Center’s Production Unlimited. He is buried at Glenwood Cemetery.

This is sensational news. Nothing was accomplished but to try to embarrass a family because a member of their family was ill.