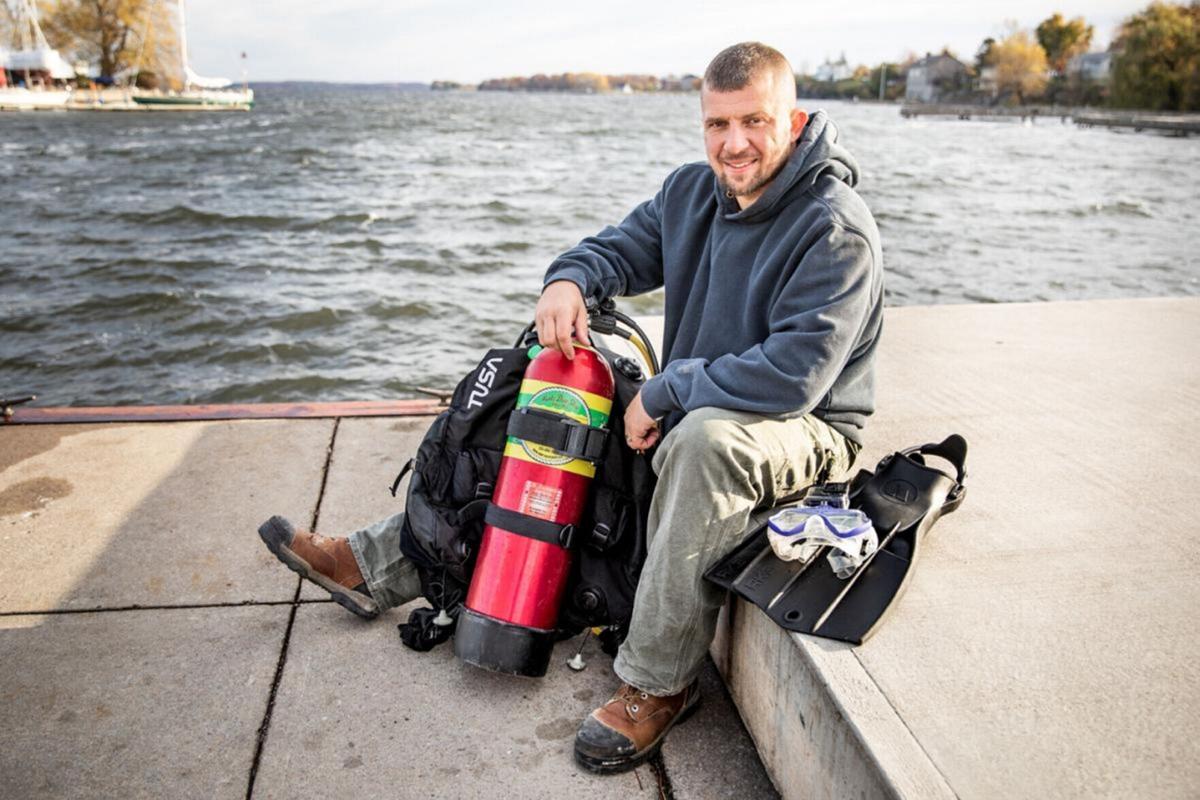 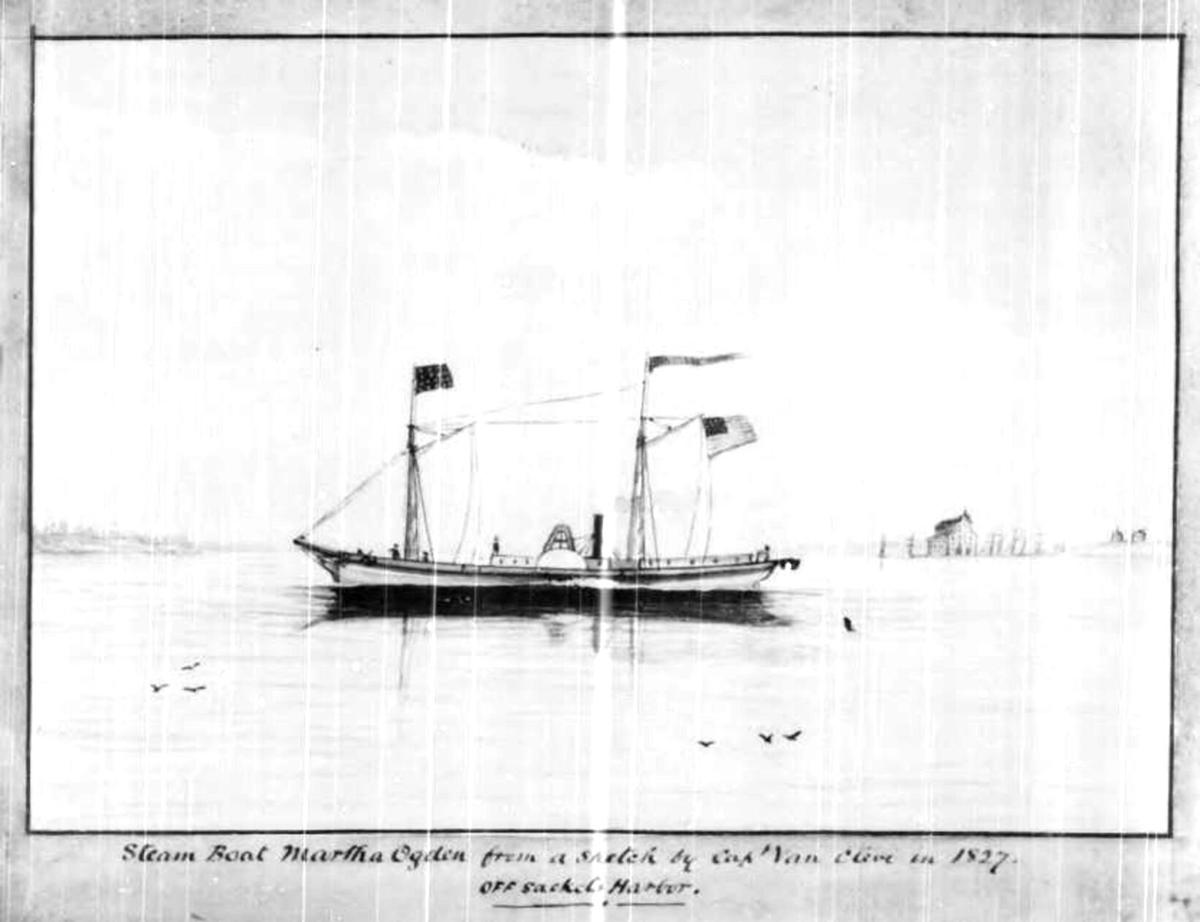 An old sketch of the Martha Ogden steamer from the Jefferson County Historical Society in.

An old sketch of the Martha Ogden steamer from the Jefferson County Historical Society in.

HENDERSON — It all began in early September of last year after one of Daniel J. Gildea’s friends mentioned to him that his anchor had gotten stuck on a piece of wood that looked “like an old dock or something” in the Henderson Bay area. Curious, he donned his scuba gear and went to check it out for himself.

After about 120 feet of swimming underwater, Mr. Gildea came in contact with a ship: a wooden ship that most likely dates back to the middle to late 1800s, sitting down about 20 to 30 feet on the bottom of Henderson Bay.

Wanting to find answers, Mr. Gildea had many people reaching out to him to lend their expertise and helping hands for research.

“At first I didn’t really know who to talk to, a lot of people reached out to me to say that they could help with the identifying and continual information gathering of the site,” he said. “I got directed to the Maritime History of the Great Lakes website, boatnerd.com was another one. Sandy Creek public library holds a lot of shipwreck information, as well as some books that were written by Dennis McCarthy and his expertise on it.

“Then there were a couple Canadian websites,” he added. “They’ve all provided different pieces of the puzzle to kind of put it together.”

Perusing historical records and old newspaper clippings, which would often record various ships that did not make it to their destinations, sets the stage for a lost ship. Whenever one is found, it’s a matter of finding out how many other ships were lost on that same route built to that same type of construction and design.

The list for this particular wreck was narrowed down from about 60 to three potential ships, but with an eye on one in particular: the Martha Ogden steamer.

“It goes from this suspected dock fishermen keep losing anchors on, to a ship,” Mr. Gildea said. “Then the curiosity kicks in, so then you continue down the rabbit hole reading literally thousands of articles and web pages for months on end, to come to the conclusion that, yes it’s exactly where the captain said it would be almost 200 years ago.”

The Martha Ogden was built in Sackets Harbor in 1823 and sank on Nov. 12, 1832, with no lives lost. The ship was built by Albert Crane of Sackets Harbor with a cross-head engine and took its first voyage on April 1, 1825. It was named after the wife of Thomas L. Ogden, according to the Maritime History of the Great Lakes. What is now Navy Point Marina in Sackets Harbor is where the ship would have been built.

“Shortly after leaving the harbour of Oswego, the weather appeared threatening, and a heavy sea began to make. But it being impossible to go back — the wind having veered to the west and a very heavy sea on — I was obliged to do the best I could,” reads Captain William Vaughan’s account of the events leading up to the sinking of the ship.

This letter, among other newspaper clippings detailing the loss of the ship, donated by William R. McNeil, are available through the Maritime History of the Great Lakes website.

In November 1832, when it was first reported that the ship sank, the captain wrote a letter explaining how the ship had left the port of Oswego and a wave came over to the side of the boat and put the steamer out so they couldn’t get the flame to re-light. Forced to go to sails and use the wind, the ship’s crew and passengers continued their trip north. Turning back wasn’t an option because the water was rough.

“... believing, with all on board, that the boat would founder if kept on the lake — she being so water logged, and that all on board would perish, I ran into 8½ fathoms of water and let go both anchors about 9 o’clock,” reads Captain Vaughan’s letter. “She rode about an hour and a half — all hands bailing — when both chains parted within 5 minutes of each other ... My passengers, however, rendered all the assistance in their power, and to their exertions, with my own and crew, and the help of a Divine Providence, we were all saved.”

According to Mr. Gildea, the wreck he found is in the exact bay where historical accounts say the Martha Ogden ran aground, and it’s in the exact depth of water. The only things that remain to be found at this point are the two anchors that were lost out in deeper water, which will likely be found when National Oceanic and Atmospheric Administration comes to scan for the proposed Lake Ontario sanctuary this summer.

“I think there’s proposals out there right now to open this site to the general public as part of the sanctuary for a level of understanding when it comes to the key role the maritime history plays in our part of the state,” Mr. Gildea said. “I think that the goal is to establish a sense of awareness of the importance that maritime transportation played in the development of this area and preserve some of these wrecks.”

After the initial discovery of the wreck, Prudent Engineering conducted a survey of the site, which included a bathymetric survey to show depth of water and height of the object, a three-dimensional scan of the wreck, and a side scan sonar “structure scan,” which helped in narrowing things down.

Originally from Pennsylvania, Mr. Gildea was eventually stationed at Fort Drum with the Army and retired in 2018. He had done recreational diving in the past while stationed in Guam, so once he was sent to the area, he decided to pursue freshwater diving and has been doing it ever since. This wreck is the first full on ship he’s found while out diving.

Mr. Gildea, currently a construction superintendent for the state Office of General Services Design and Construction, is closing out his time with the state and will start his new job on April 5 with Prudent Engineering in Syracuse, the ones who did the initial scan on the shipwreck when he found it.

In identifying the wreck, to the best of his abilities, he said it is a big relief that no one died on the ship. He also noted that he was wrong in his initial assumption. It’s actually not the bottom of the ship but the entire starboard side on display below the depths.

“It’s not going to be there forever, we kind of accept that rationale that wood is gonna decay and the remnants will be left behind,” Mr. Gildea said of the wreck. “But in the meantime you’ve documented your findings, you’ve had multiple surveys done on it. I’ve reached my level of closure to where I’m one hundred percent convinced that is the ship.”

He noted that while 100% positive identification on any shipwreck in Lake Ontario, or the St. Lawrence River for that matter, is near impossible because there are no names on the sides of these ships, all signs point toward the Martha Ogden as the wreck he found.

Mr. Gildea has done one dive so far this year, and said it will probably be May or June when he goes back out to look at the remains of the ship again. Having found and identified his first shipwreck, he is looking forward to more dives to see what he will find next.

“For me, that’s the closure that I needed to say, ‘OK, I’ll check that one off the bucket list and let’s look for the next one,’” he said. “The north country wouldn’t be what it is right now without maritime history. You get these old stories, and it’s not the everyday cliche stories that you will see on TikTok or social media, but real interesting stories that have meaning to us here.”