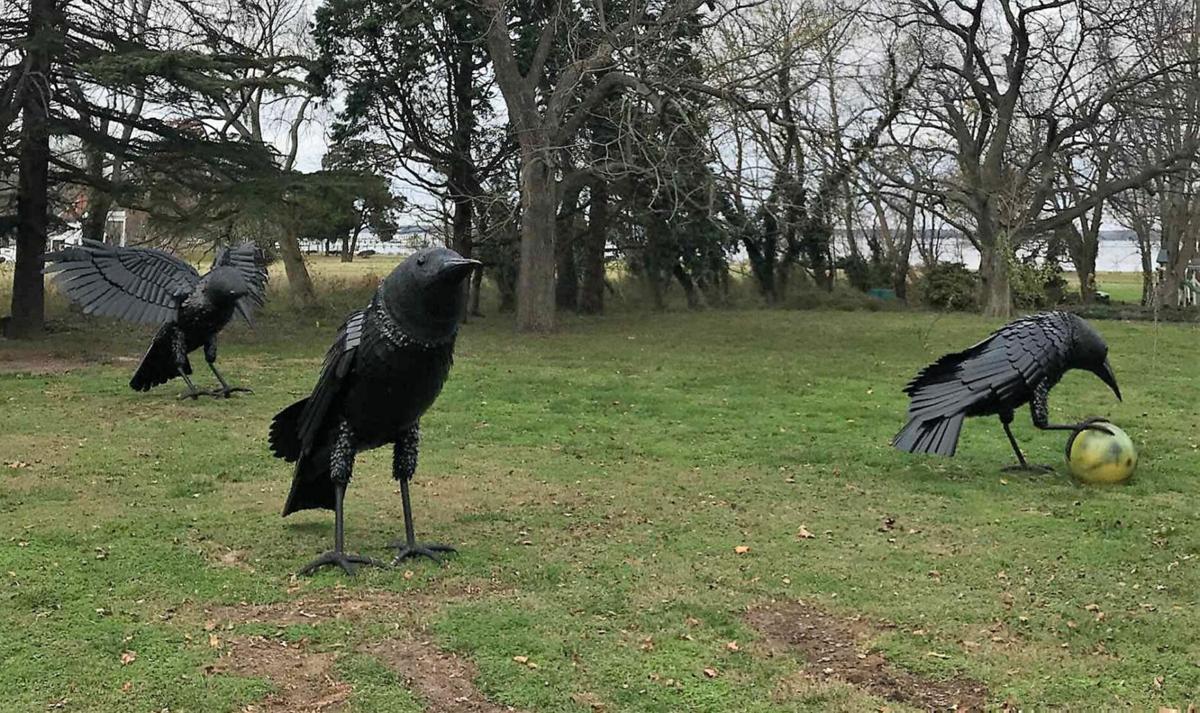 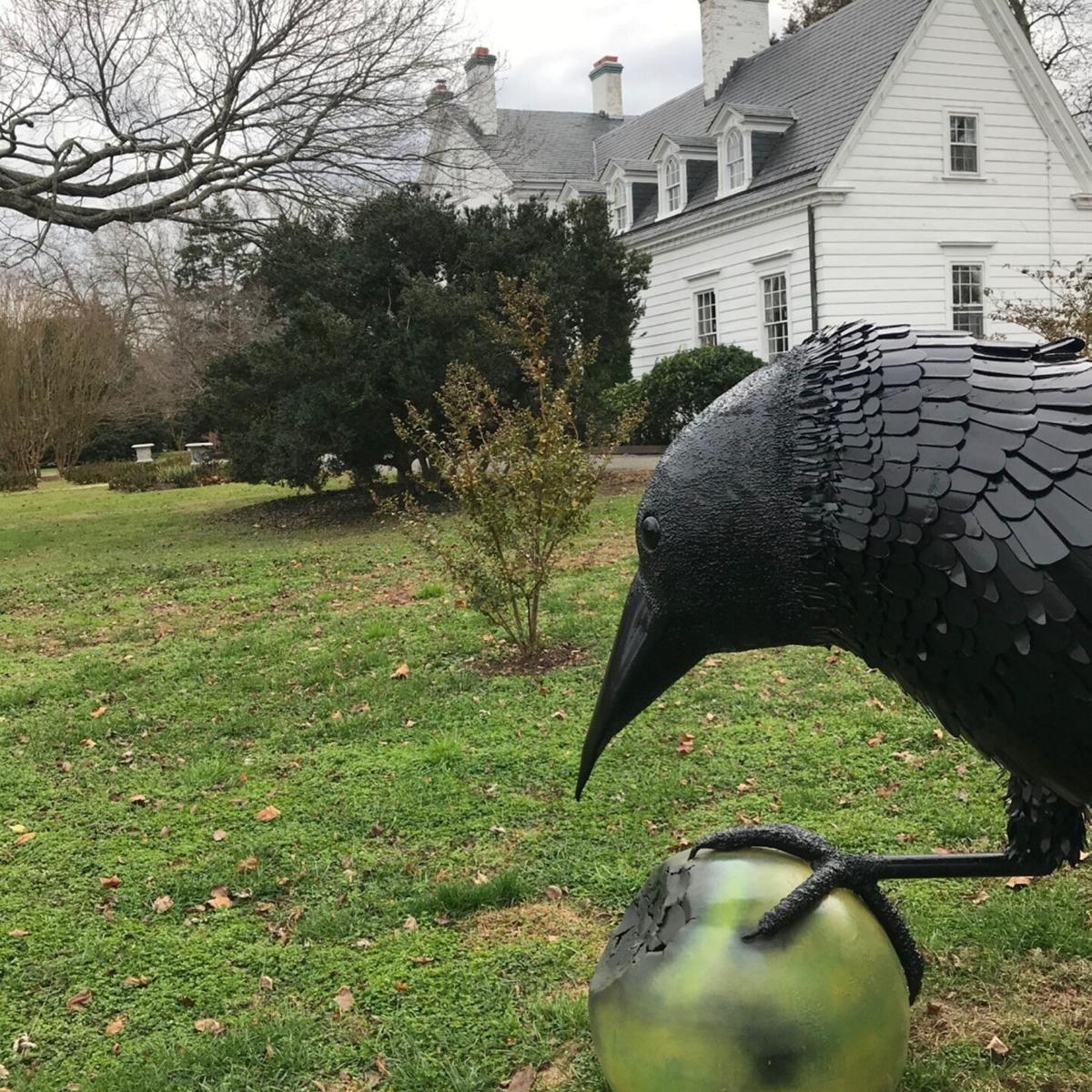 One of the three sculptures clutches a “walnut” with the 1760 historic home in the background. Courtesy Will Salisbury 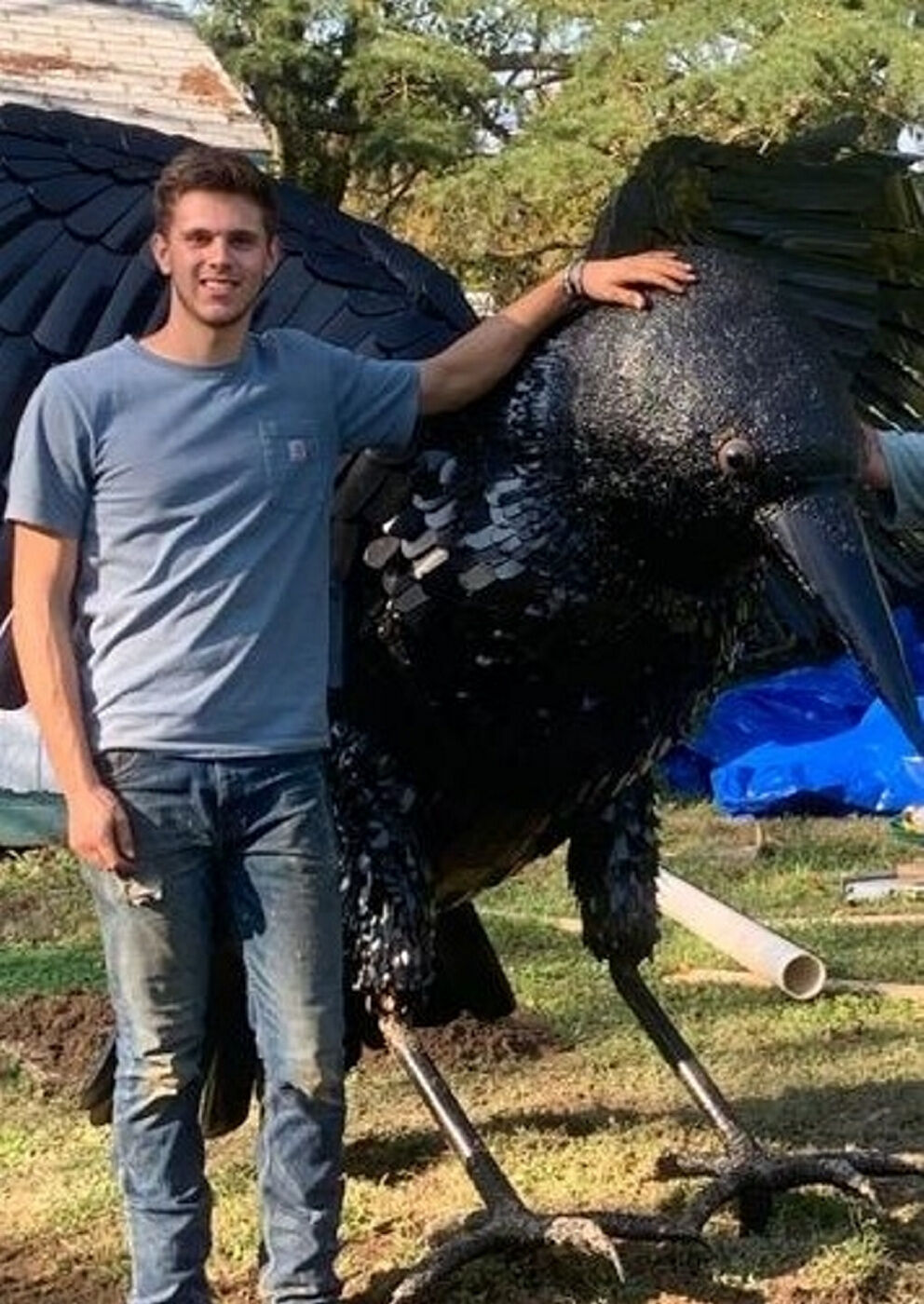 Nolan Irvine, who assisted with installation of the crows, is a senior at Alexandria Central. Courtesy Greg Irvine 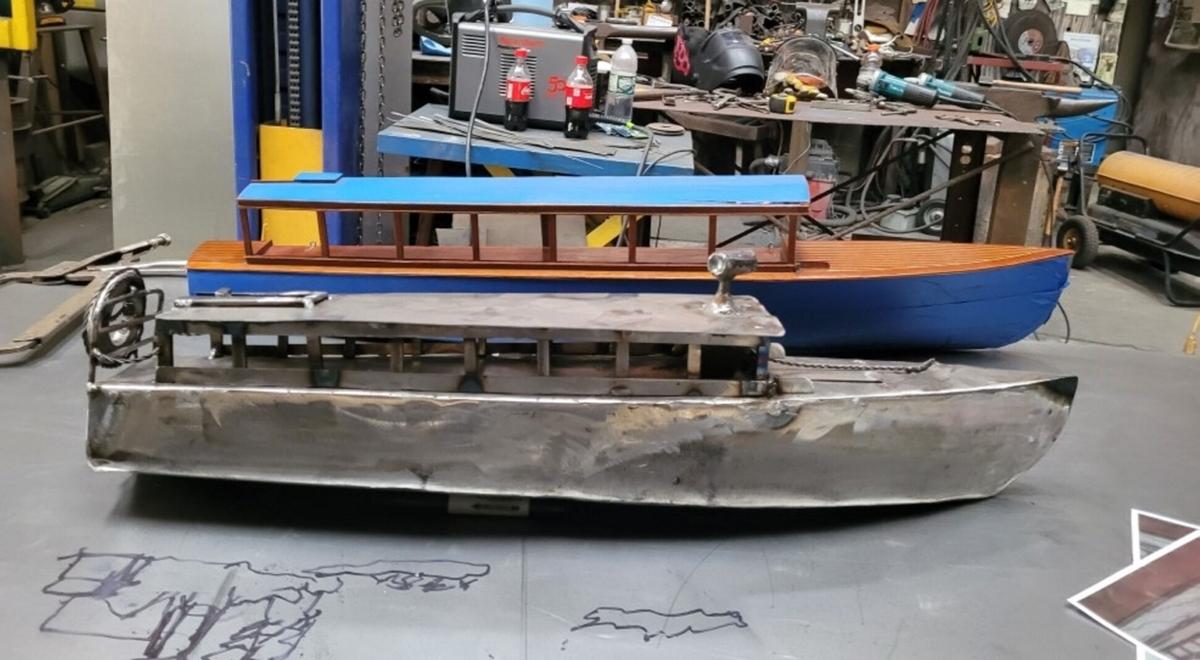 A section of Will Salisbury’s new sculpture featuring a likeness of “That’s Her” sits in front of the original wood model that was used as a guide to construct the actual vessel nearly 90 years ago. Courtesy Will Salisbury 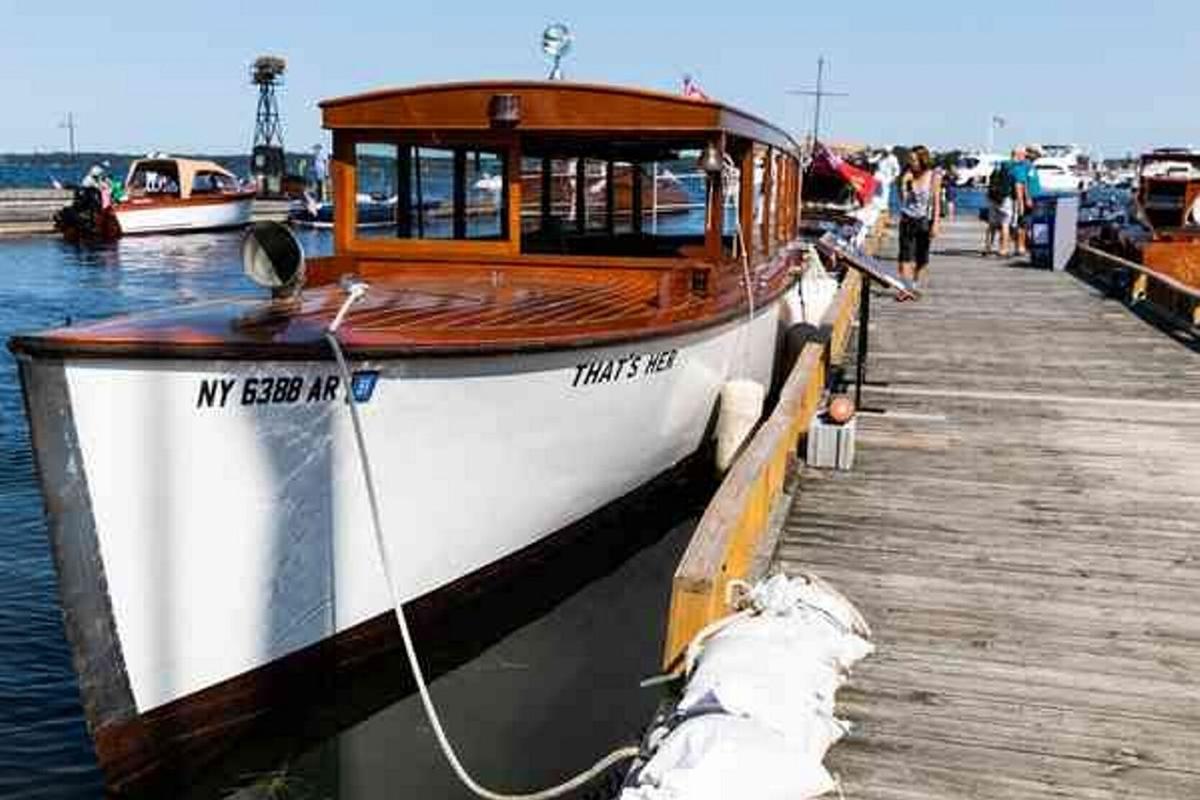 “That’s Her” sits on display in August of 2019 during the 55th annual Antique Boat Show at the Antique Boat Museum in Clayton. Watertown Daily Times 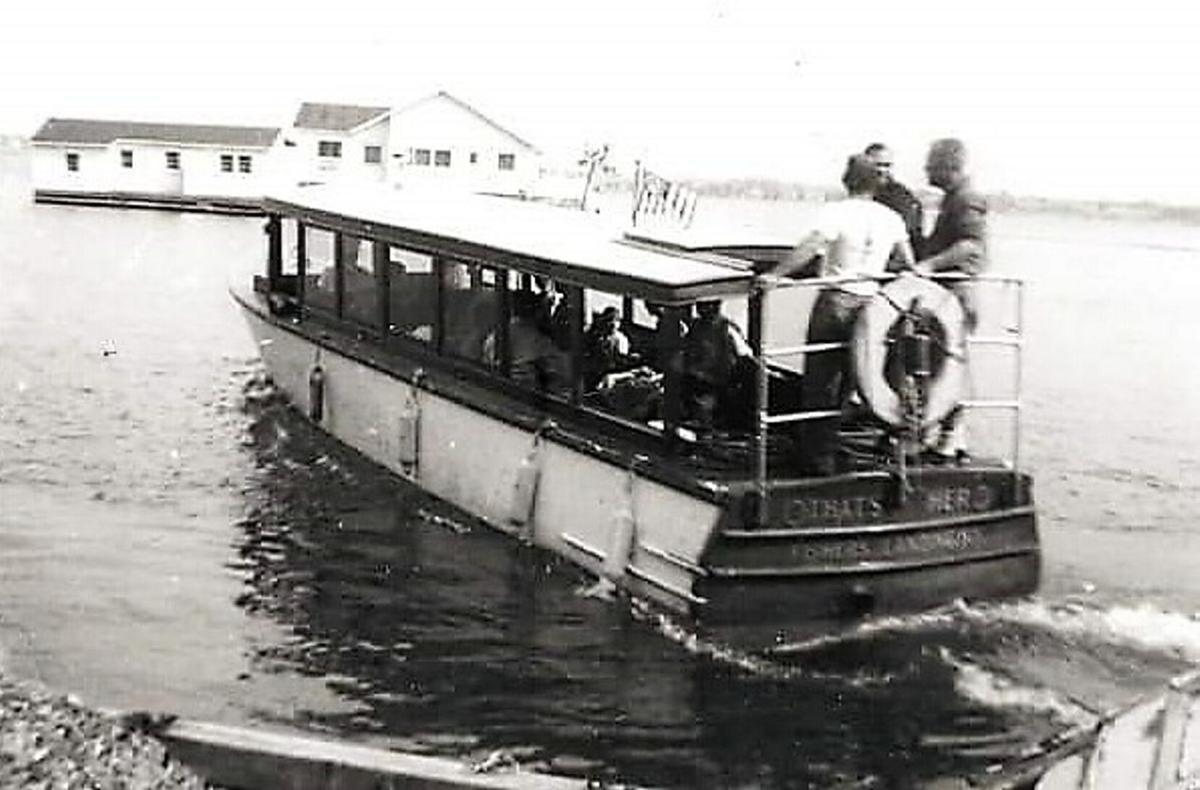 An image from decades ago of “That’s Her.” Courtesy Will Salisbury 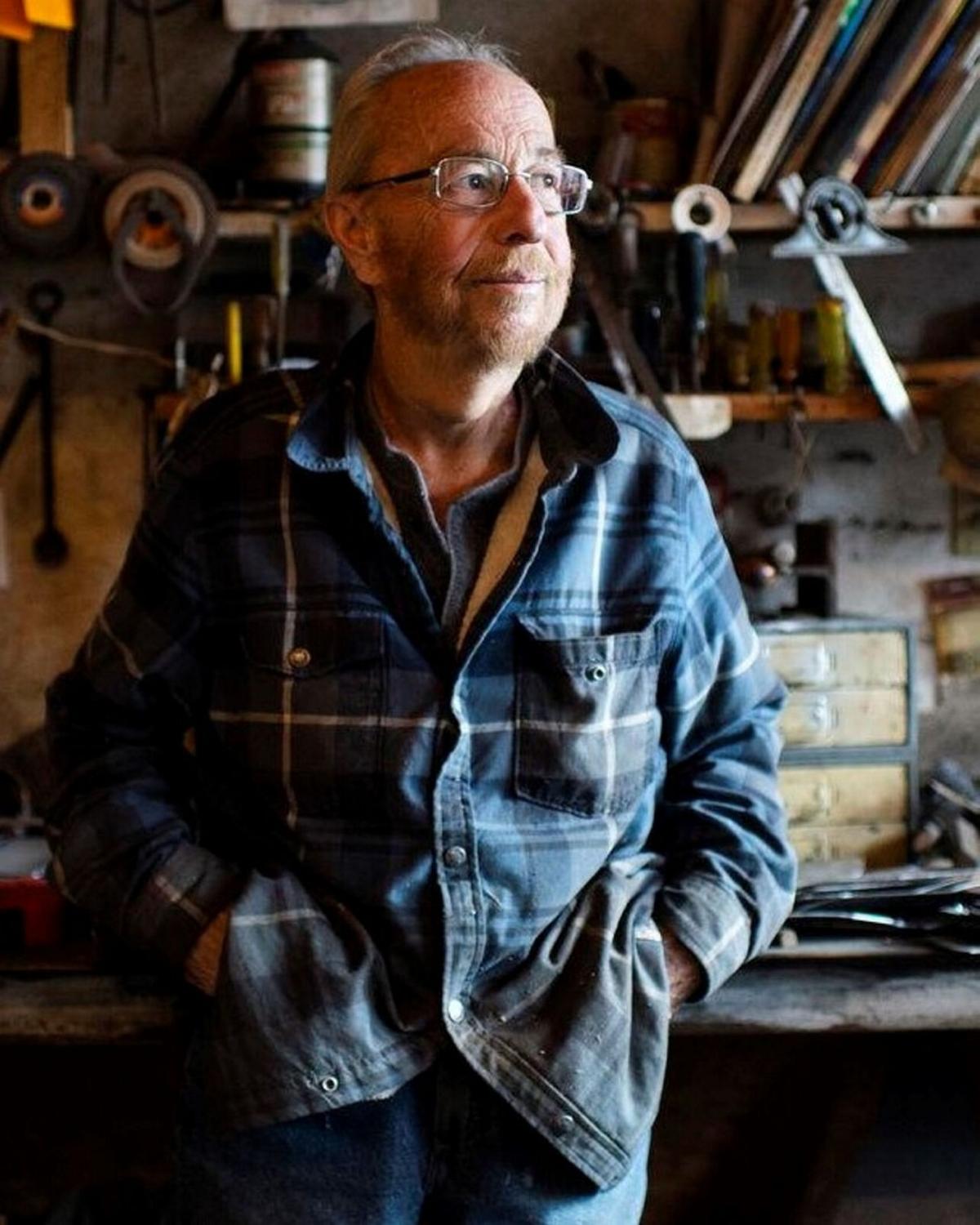 Will Salisbury in his workshop in Omar, town of Orleans. Watertown Daily Times

One of the three sculptures clutches a “walnut” with the 1760 historic home in the background. Courtesy Will Salisbury

Nolan Irvine, who assisted with installation of the crows, is a senior at Alexandria Central. Courtesy Greg Irvine

A section of Will Salisbury’s new sculpture featuring a likeness of “That’s Her” sits in front of the original wood model that was used as a guide to construct the actual vessel nearly 90 years ago. Courtesy Will Salisbury

“That’s Her” sits on display in August of 2019 during the 55th annual Antique Boat Show at the Antique Boat Museum in Clayton. Watertown Daily Times

An image from decades ago of “That’s Her.” Courtesy Will Salisbury

Will Salisbury in his workshop in Omar, town of Orleans. Watertown Daily Times

William Salisbury’s trio of commissioned crows have arrived to roost in Cambridge, Md., and appropriately, an avian welcome party flew in for the occasion.

“It’s interesting. When we were installing them, giant birds were circling for two days,” said Stephen Brown, who, with partner James Hoff, owns the historic residence, Glasgow, built in 1760, where Mr. Salisbury’s three crows are permanently grounded. “They were just kind of checking them out, like ‘What the heck is this?’ We have lots of birds of prey here. It was quite nice to see them welcoming the crows in.”

The home in Dorchester County is a Federal style structure listed on the National Register of Historic Places and contains several out-buildings.

In 2013, Mr. Brown purchased an 1883 Victorian home on Comfort Island. The structure, which faces Boldt Castle, is one of three homes on the island. Mr. Brown began its restoration with Mr. Hoff.

The pair became familiar with Mr. Salisbury’s creations when they spotted his “Three Crows” sculpture, installed on the eve of 2000, on his property behind his workshop in Omar on the west side of southbound Interstate 81 in the town of Alexandria.

“Because of the bear, we are super close to Will and big fans,” Mr. Brown said.

Mr. Salisbury finished his new crows, which have much more detail than his 2000 versions, this past summer, at about the same time an exhibit, “Will Salisbury, Sculptor, a Retrospective,” opened at the Thousand Islands Arts Center, Clayton. One of the new crows took up temporary residence at the center during the retrospective.

The Cambridge crows, about 7 feet tall, have different poses. On appears as if just landing, one stands guard and the third clutches a walnut.

“They’re viewable from the street, which was important to us and to Will,” Mr. Brown said. “There has to be a sense of public availability, if you will, to see them. They’re just so beautiful. We have enough room so that each sculpture can stand on its own and be viewed unencumbered by the others.

The crows, which took Mr. Salisbury 13 months to create, were installed on the 3-acre property in early November with some difficulty due to the weather.

“They’re massive and they’re heavy,” Mr. Brown said. “We had a torrential rain storm the day before. It just soaked the ground. We had one truck come, get stuck, and had to be pulled out. We brought in a different type of lift, and that got stuck and it took us hours to get it out. So carefully, we had to creep across the lawn with boards underneath, supporting this six ton machine to lift up a one ton sculpture and place it. It was a lot of work in just mucky, horrible conditions.”

Mr. Salisbury didn’t assist with the two-day installation, but Nolan and Greg T. Irvine, two relatives who helped him to craft the crows, did travel to Cambridge for the setup. The final on-site installation work included attaching the crows’ wings and glass eyeballs. Mr. Salisbury had help making the feathers on the wings from local craftsman Michael Rainville. The eyeballs were created by local glassblower Steve Harrington, who has often worked with Mr. Salisbury crafting the eyes on his various animal sculptures.

Nolan Irvine, Mr. Salisbury’s great-nephew, said a telehander, also called a telescopic handler, had to be rented, which he operated, for the project’s second day after a crane got stuck on the first day. “It’s basically an oversized forklift,” he said.

Nolan, who is a senior at Alexandria Central School, said the installation was the first time he saw the crows as a finished project.

“It was my first time seeing them all painted,” he said. “It amazed me how they looked, and with the glass eyeballs, it really tied it all together.”

He’s also impressed by the placement of the birds.

“He has most of them facing the road, like in a triangle,” he said.

Mr. Brown is also happy with the way the project turned out.

“I think we now have some of Will’s most iconic works,” he said. “Artists need to be supported, honored and cherished and I hope that’s what we do for him, both with the bear and the crows.”

He sees the Cambridge crows as harbingers of change.

“This 2020 has been a horrible year, with the hope that we’re looking at brighter days ahead,” Mr. Brown said. “Will put those crows (off I-81) up in 2000, because everyone thought that 2000 would be this massive shift and change. Now, 20 years later, we’re hoping for the same thing. We’re hoping for an end to COVID.”

“I was really pleased that I got permission to do a major project again like that, and that people had faith in me still,” said Mr. Salisbury.

Making a scene for That’s Her

Mr. Salisbury is now working on a new commission, but on a much smaller scale.

The boat, the ferry vessel That’s Her, was built in 1933 by Brainard Robbins on property which is now the Antique Boat Museum in Clayton.

“It’s the primary object in the scene I’m making which will include the Rock Island light in the background, Thousand Island Park, and a ship going up the Seaway,” Mr. Salisbury said. “Artistic license is being taken.”

The river scene, with items he is handcrafting in metal, will be 5-feet-by-4-feet. It’s being built for the owners of a cottage on the shores of Fishers Landing, less than 3 miles from Mr. Salisbury’s Omar workshop and home. Its owners plan to mount it on a new garage being built to be viewable from the road.

“It’s a small enough project so I can get back into my craft,” said Mr. Salisbury, who is recovering from recent health issues. “I’m still pretty shaky. Some of the welds are being done by my helper. But we’re building it.”

Mr. Salisbury was loaned the wooden model which the real That’s Her was based upon to build his scene. The model and the actual That’s Her is owned by Duane Chalk of Fishers Landing.

That’s Her has been owned by the Chalk family since 1943 when Harry and Hazel Chalk bought it from the Robbins family. Duane Chalk was about 13 when he started piloting the vessel as his parents looked on. He also acted as a valet for the livery boat in his early years.

“We used it as a taxi boat,” Mr. Chalk, 90, said. “That was all it was ever used for — to take people and all their luggage and their trash over to the different islands where they lived, where the cottages were.”

Up until the 1970s, Mr. Chalk said, dockage at marinas for personal boats was rare.

“Nobody had dockage at marinas for people to bring their own personal boats in and leave them for a week,” he said.

In 1970, Mr. Chalk said, That’s Her was stored inside a building at his marina, where he said it sat for 18 years in conditions not idea for a wooden boat. Then, after he sold the marina, That’s Her sat in his backyard.

By 2012, Mr. Chalk had been working on restoring That’s Her. In that same year, an organizer of a Grennel Island boat “rendezvous” contacted him.

He docks the nearly 40-foot That’s Her at the Antique Boat Museum in summers.

“It draws a lot of attention” he said. “People who walk by it are amazed at the age of it and all that. The condition of it is unbelievable.”

The boat’s bottom is made of cypress, her sides are cedar and the decks and cabin are crafted from mahogany.

“It’s an amazing-running boat,” Mr. Chalk said. “It knifes through the water like you wouldn’t believe.”

These days, That’s Her is used for excursions such as wedding trips and private cruises. Mr. Chalk’s only fee is by donation.

“All we ever care about is to cover the gas money cost,” he said.

That’s Her — in a nutshell. But what about her unusual name?

“People started calling it that when they knew it was around the corner,” said Mr. Salisbury, who has taken several trips on That’s Her, beginning as a youngster. “You could hear the engine, the chugging, coming. It was a special sound out of that boat.”

“That’s because of her 30-foot-long exhaust pipe,” Mr. Chalk said.