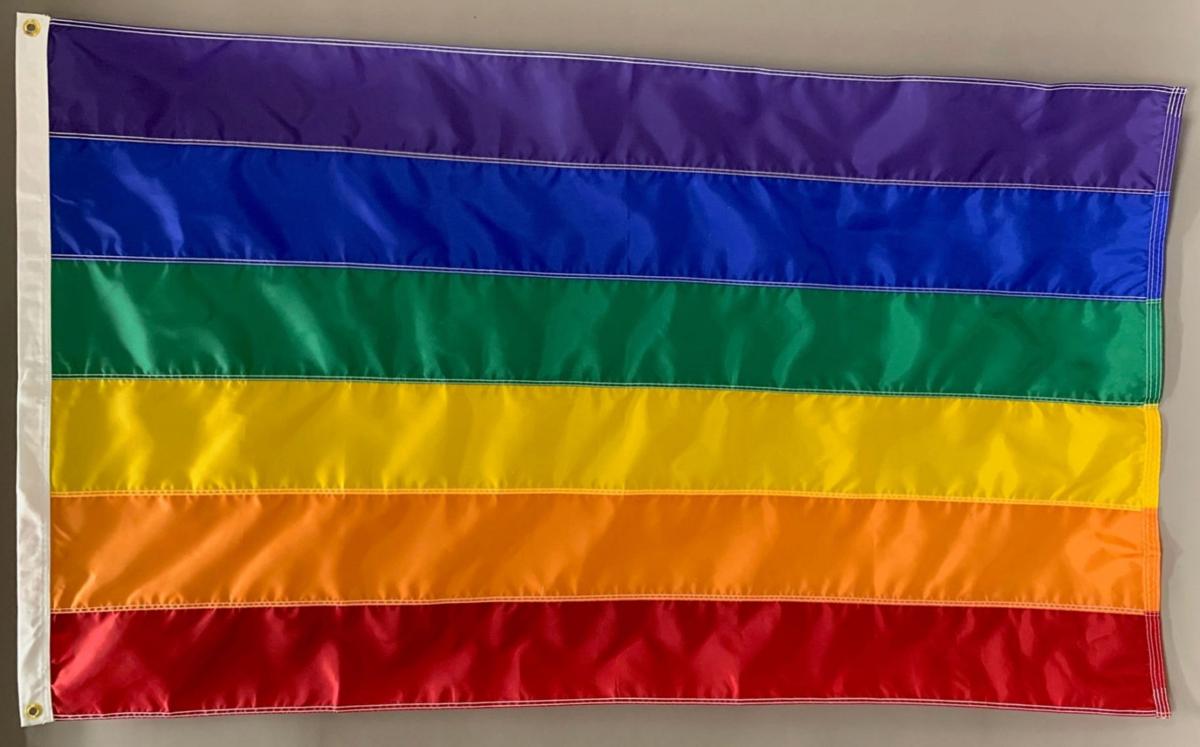 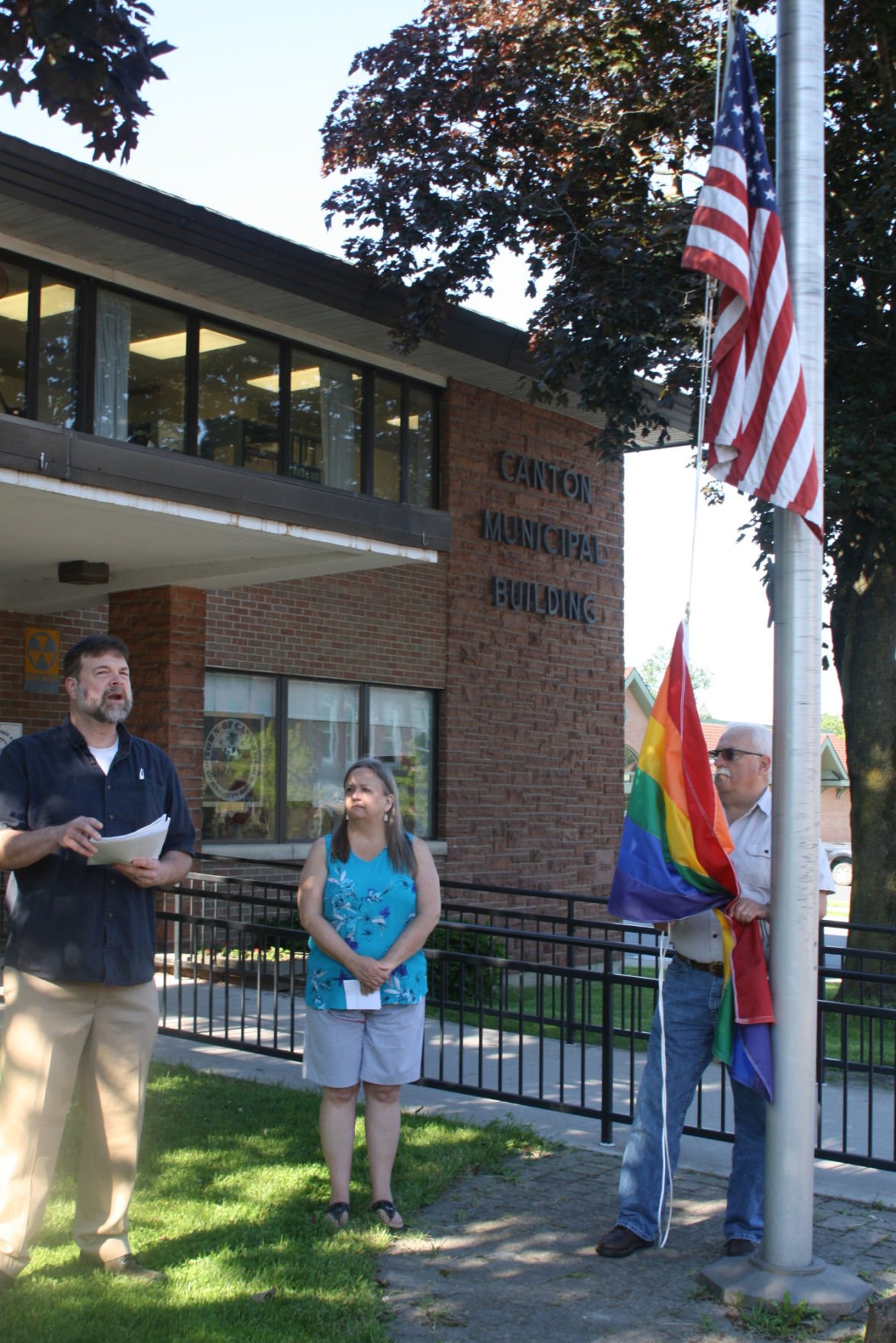 CANTON — Red means life, orange is healing. Yellow for sunlight, green for nature, blue for serenity and violet for spirit.

The Pride colors waved above the Canton municipal building in 2019 for the first time in history. And now, the flag that was raised is housed in the New York State Museum in Albany, along with copies of two speeches delivered at the flag raising.

The flag raising was passed by a joint town and village resolution on June 10, with both boards unanimously approving a resolution recognizing June as LGBTQ Pride month and committing to raise a rainbow flag over the municipal building.

In commemoration of the 50th anniversary of the 1969 Stonewall Uprising at Manhattans’s Stonewall Inn, LGBTQ Pride celebrations fervently endured throughout June, and municipalities across the country recognized June as gay-pride month or flew the gay-pride flag, many for the first time.

A rainbow flag flew over New York’s state Capitol for the first time in history, and in Potsdam, just 11 miles northeast of Canton, a similar joint resolution was passed on June 11, and a gay-pride flag was raised in front of Potsdam Town Hall.

“I want to say a few words for the hundreds of brave, brilliant, wonderful people in the LGBTQ community who have moved away from the north country and made a home somewhere else,” then-Canton Village Trustee Sean O’Brien told a group of about 30 people at Canton’s flag raising on June 27. “This flag flies to let you know that we miss you all of the time, but we are especially missing you this June, on the 50th anniversary of Stonewall. This flag flies to tell you we are always proud of you. This flag flies to represent the best of us, and that means you.”

The National Alliance on Mental Illness reports LGB adults — LGB due to lack of data specific to transgender, asexual, queer and questioning people — are more than twice as likely as heterosexual adults to experience a mental health condition at some point in life.

As of 2019, LGB high school students were almost five times as likely to attempt suicide compared to their heterosexual peers, and LGBTQ people overall were at a higher risk than the general population for suicidal thoughts and suicide attempts. Additionally, NAMI 2019 data shows 48% of all transgender adults said they had considered suicide in the past year, compared to 4% of the overall U.S. population.

The list of hate crimes and acts of terrorism against LGBTQ people in the United States is long and bloody, with the Stonewall Uprising helping to push LGBTQ activism into a modern era and inspiring the foundation of several gay rights organizations.

But since the early morning of June 28, 1969, when police raided the Stonewall Inn gay bar in the Greenwich Village area of Manhattan and five days of rioting and protesting by the LGBTQ community followed, persecution of LGBTQ people has intensely evolved.

A non-exhaustive series of examples indicates the level of historical violence: the 1972 arson of a gay bar, New Orleans’ Upstairs Lounge, killed 32 people, the 1990 fatal stabbing of gay Vietnam War veteran James Zappalorti in Staten Island, the 1995 murder of Roxanne Ellis and Michelle Abdill, a lesbian couple living in Oregon, the 1997 bombing of an Atlanta lesbian bar, The Otherside Lounge, injured five people, the 1998 torture and murder of Matthew Shepard in Laramie, Wyoming, the 2008 murder of Angie Zapata, a trans woman in Colorado, the 2016 attack on Orlando’s Pulse nightclub left 49 dead and 53 wounded.

No less tragic than any “high-profile” hate crime, countless other incidents characterize the violent history experienced by LGBTQ people.

“Too many people in the LGBTQ community suffer an increased risk of suicide and self-harm, but even more so, are disproportionately victims of violence,” Mr. O’Brien said last week.

That fact gave way to the direction in which the gay-pride flag was raised in Canton, with the red stripe for life at the top.

Designed by Gilbert Baker in the 1970s and the original raised during the 1978 San Francisco Pride Parade, the gay-pride flag originally consisted of eight stripes — the six that remain in popular renditions, as well as pink and turquoise, standing for sex and art, respectively.

The flag replaced the pink triangle that, for a time in the mid-20th century, symbolized the LGBTQ movement after it was used as an identifier by Nazis.

With a fresh representation of the LGBTQ community, the flag could be hung in any direction and maintain its significance. Perhaps, Mr. O’Brien said, the flag will fly in Canton in June 2020 with purple, for spirit, at the top.

Canton’s rainbow flag raised in June rests in an archival cabinet with acid-free tissue at the State Museum. The museum’s acquisition of the flag and speech transcripts from Mr. O’Brien and Town Supervisor Mary Ann Ashley was part of an initiative to represent the history of New Yorkers more equitably, across state geographies, communities and identities, according to Ashley Hopkins-Benton, senior historian and curator of social history at the State Museum.

“We are charged at the State Museum with telling the history of all New Yorkers, and having a significant portion of New York not represented is problematic,” Ms. Hopkins-Benton said.

The Museum has been “taking a step back” over the last year to work on building its LGBTQ collection and tell stories that have historically been ignored, she said.

Intersecting with the history of violence against LGBTQ people is a history of oppression in public systems and daily living, issues that seem to simmer in the background. Isolation and rejection, Ms. Sorensen said, impact the LGBTQ community every day.

An assistant professor of sociology and criminal justice at SUNY Potsdam and a member of the LGBTQ community herself, Ms. Sorensen ran for her village trusteeship open about her marriage to her wife and on a platform of encouraging diverse perspectives and fostering sustainable economic, educational, and recreational opportunities for everyone.

A history of housing, public service, health care and employment discrimination compounds difficulties with familial and general social acceptance for LGBTQ people. What many people don’t realize — people who argue the LGBTQ community wants “special rights” — is that LGBTQ people are fighting for basic rights, human rights, Ms. Sorensen said. In any case, she said, improving access to services, housing, and community life is beneficial to everyone.

“When everybody in a community thrives, we have a thriving community,” she said.

Though New York State has passed legislation protecting LGBTQ rights, including the 2011 marriage equality act and the 2019 update to the Hate Crimes Act of 2000, work to support LGBTQ communities continues.

“As local government, our job is to try to create a thriving, welcoming community that works for everyone, period. Everyone,” Ms. Sorensen said. “As people, we have to continue to have this conversation because we’re talking about people’s lives.”

Allow the kids to have a course as they can learn they have options . But please Brown can you make sure the transgenders not use girls bathroom so families with values and faith not have to live like you. Brown. Are you not a sheriff How can you be on a board?????

this is shameful bigotry.