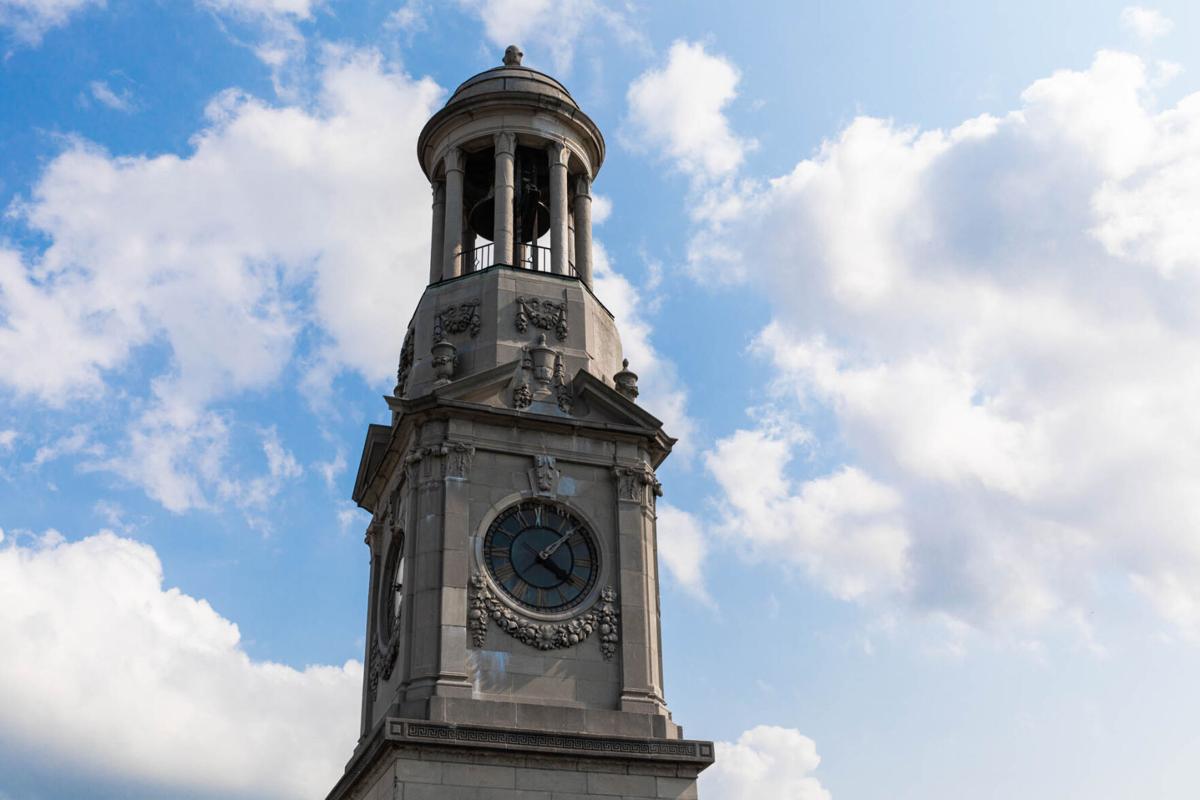 The Ogdensburg City Hall clock and bell tower was recently repaired, allowing for the bell to ring for the first time in roughly five years. Sydney Schaefer/Watertown Daily Times 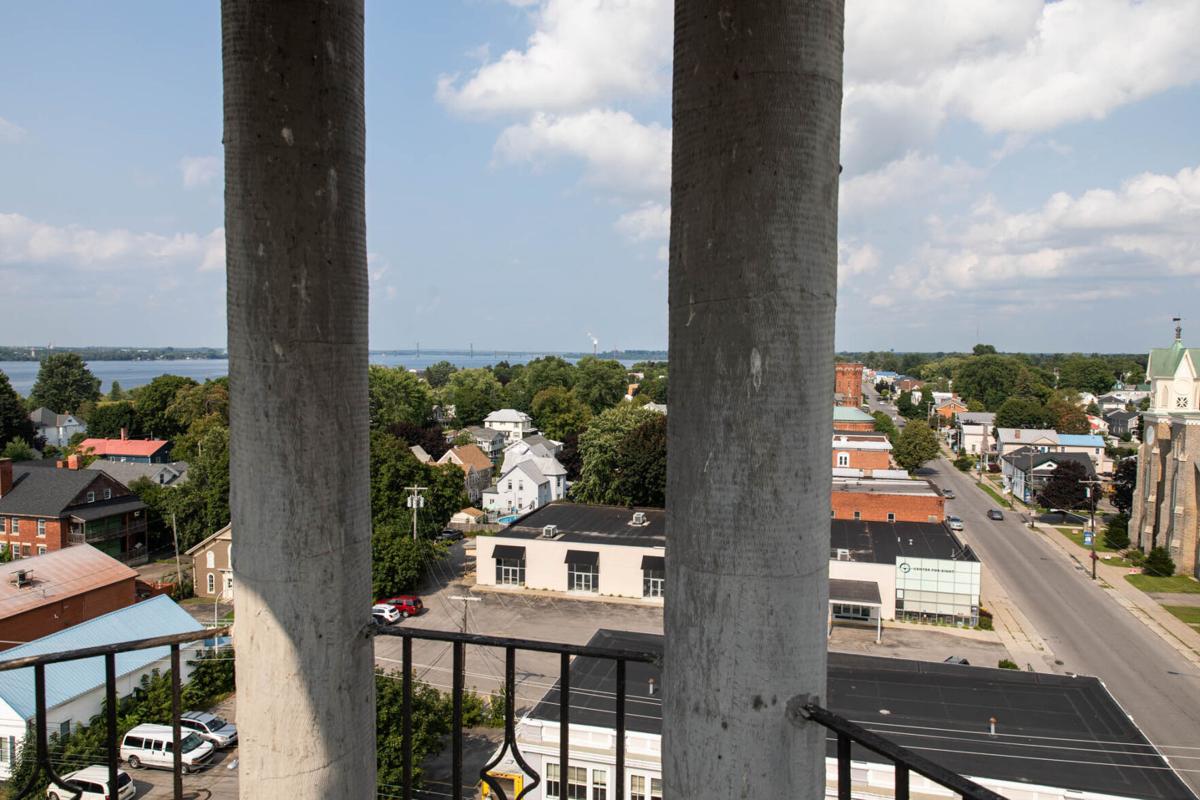 The view of Ogdensburg from the top of the City Hall bell tower on Monday afternoon. Sydney Schaefer/Watertown Daily Times 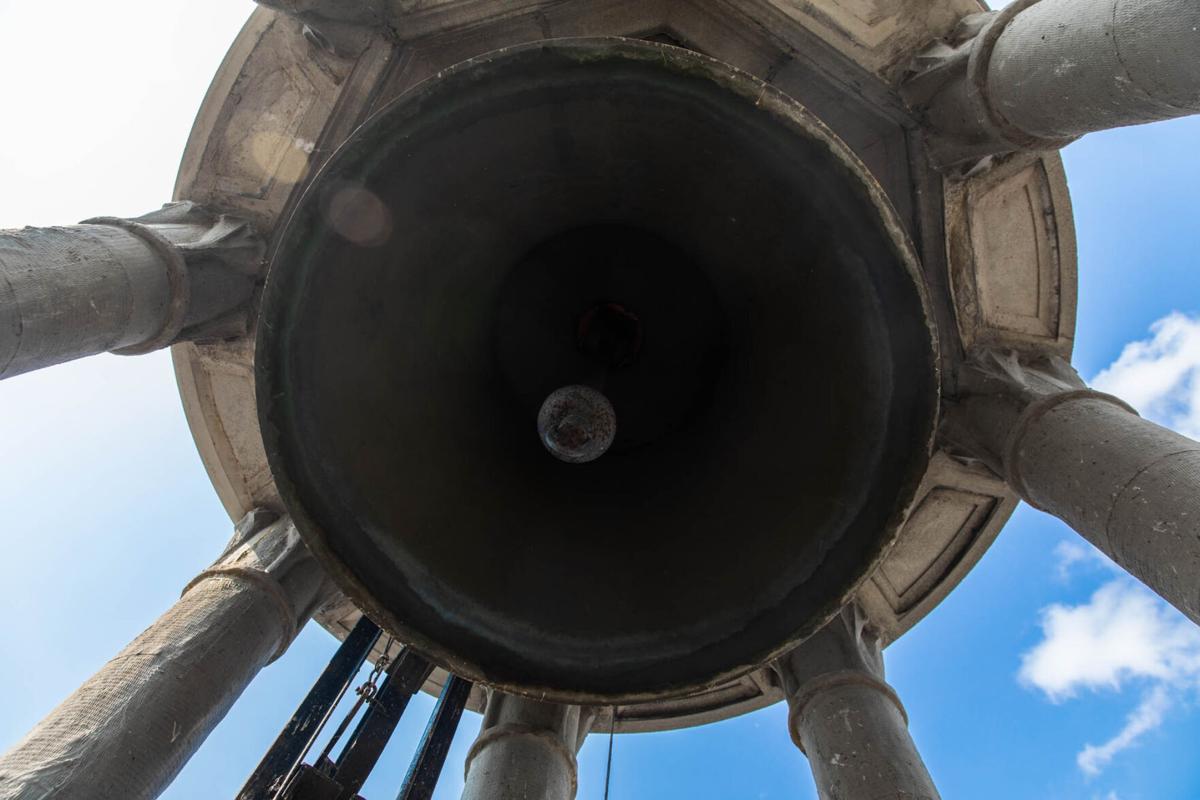 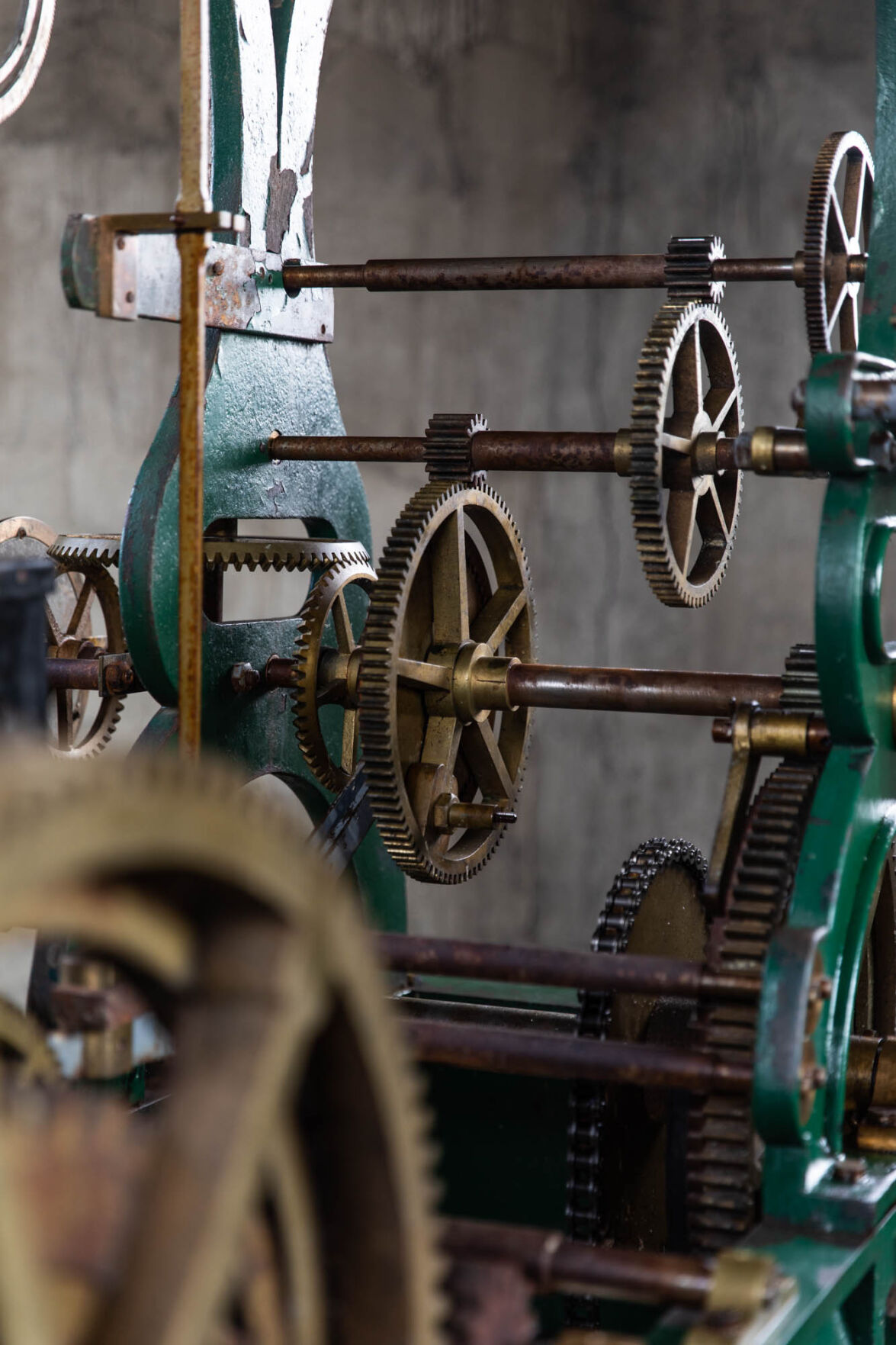 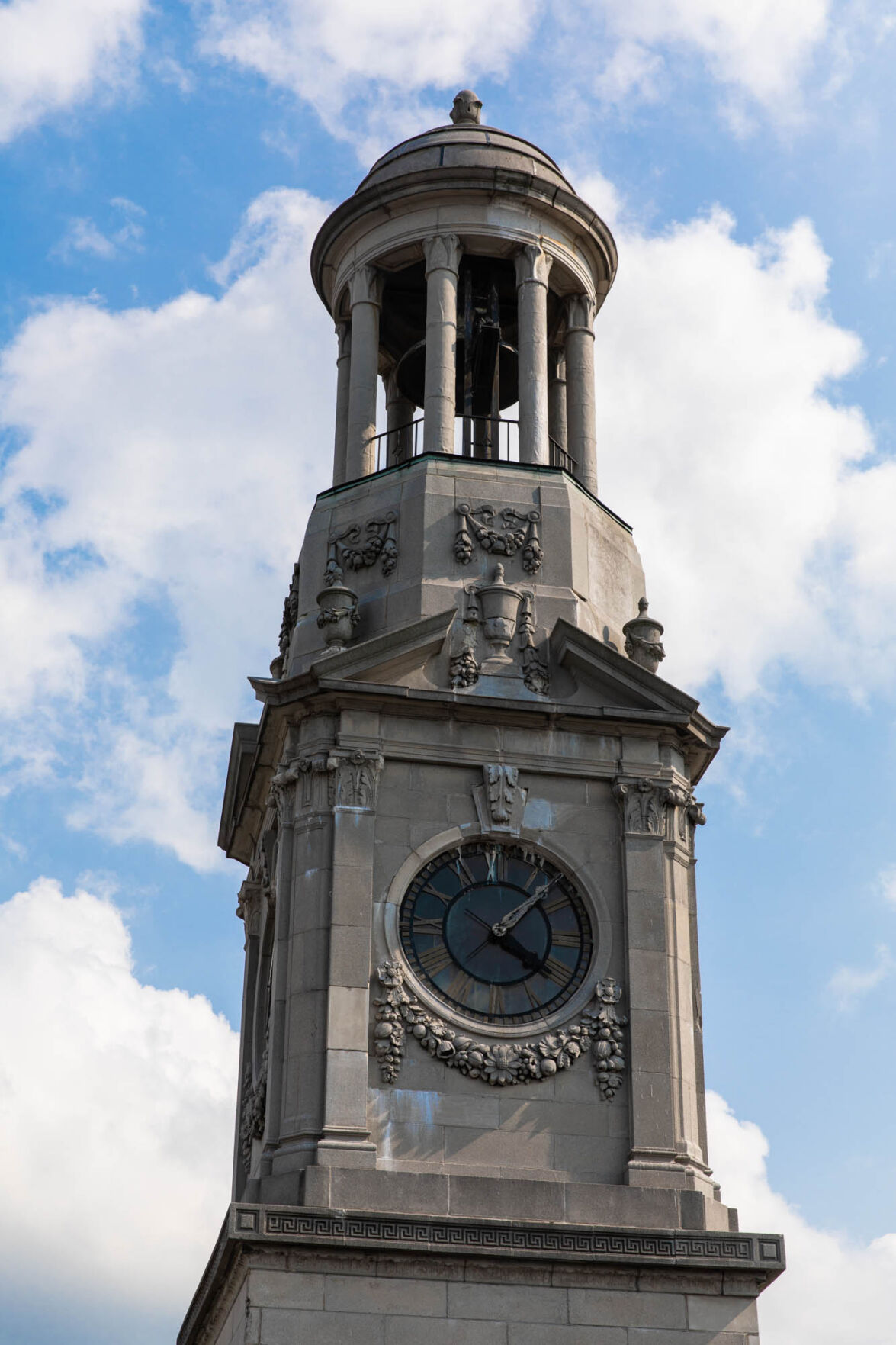 The Ogdensburg City Hall clock and bell tower was recently repaired, allowing for the bell to ring for the first time is roughly five years. Sydney Schaefer/Watertown Daily Times

The Ogdensburg City Hall clock and bell tower was recently repaired, allowing for the bell to ring for the first time in roughly five years. Sydney Schaefer/Watertown Daily Times

The Ogdensburg City Hall clock and bell tower was recently repaired, allowing for the bell to ring for the first time is roughly five years. Sydney Schaefer/Watertown Daily Times

OGDENSBURG — Standing inside the City Hall bell tower, you can easily see for miles. Prescott, Ontario, comes into view as you look north across the St. Lawrence River. The Adirondack Mountains come into focus as you peer south.

To reach the top, you have to climb five narrow ladders — the opening to reach the next floor gets smaller the higher you climb. But the view is well worth the treacherous journey to the top, City Manager Stephen P. Jellie said.

“You can see to China from up there,” he said Monday afternoon after climbing the five stories to the top.

The 1930s bell, dedicated to former Mayor George Hall, was out of commission for roughly five years, City Clerk Cathy A. Jock estimated. But that all changed Thursday afternoon when the bell finally rang six times to mark the time — 6 p.m.

City residents began calling City Hall on Friday wondering what the noise was — no one had heard the bell ring in nearly half a decade. Once repairs were complete, the bell began to ring every hour starting at 11 a.m. Friday. But the “dongs” stop from 10 p.m. to 7 a.m. as to not wake anyone during the night, Mr. Jellie said.

In addition to the bell, the four clocks on each face of the tower were repaired as well. The clocks are what tell the bell to ring each hour — its failure to do so caused the whole mechanism to stop working.

The repairs made to the clocks and bell, Mr. Jellie said, cost the city about $2,000. White’s Clock and Carillon Northeast Inc., Pulaski, was able to complete the clock and bell repairs in just two days.

“It is a great step to restoring our city,” Mayor Jeffrey M. Skelly said of the repairs made to the clock and bell tower, “to showing respect for our ancestors who worked so hard to create such a beautiful building.

“The neglect will not continue as we restore the building and the city,” the mayor added.

The bell that sits inside the tower today is the second of its kind. It weighs about 4,500 pounds and is 61 inches in diameter. The Meneely Bell Company of Troy took six weeks nearly a century ago to make the bell, which is made up of about 100 different parts — 78 parts are Lake Superior copper mined by the Quincy Mining Company and 22 parts are made of tin.

Once Meneely completed the bell, it was shipped to the New York Central Railroad depot and tuned to duplicate the old bell — D flat.

The old bell fell from its tower on Jan. 22, 1926, about an hour and 15 minutes after what was then the Ogdensburg Opera House and Town Hall caught fire.

Before City Hall was City Hall, it was the Ogdensburg Opera House and Town Hall, which was built between 1880 and 1881 and officially opened on Nov. 10, 1881. The building’s stained glass windows were patterned after the Reims Cathedral in France; it was a live venue much of its life but switched to screening films for the final 12 years before catching fire.

The Opera House burned when a boiler in the basement exploded.

A parade for the bell from the Ogdensburg Armory included a police escort and veterans of Spanish-American War, World War I and “other wars,” according to Julie Madlin, city historian, as well as the American Legion Auxiliary. Once the parade concluded, then-Mayor John Wert accepted the donation of the bell and clock. It rang for the first time at 11 a.m. that day.

Btw, where is all this $$ coming from?? A still unopened public beach, pickleball courts, and restoration of the bell at city hall? But yet we continue to cut PD/FD positions…so public safety isnt as important as pickleball?

Nice, sentimental move by the current administration…but lets call it what it is: its like tying a ribbon on dog poop. At the end of the day, you’re still left with a piece of feces.