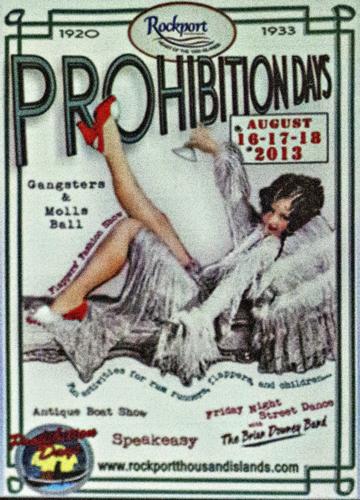 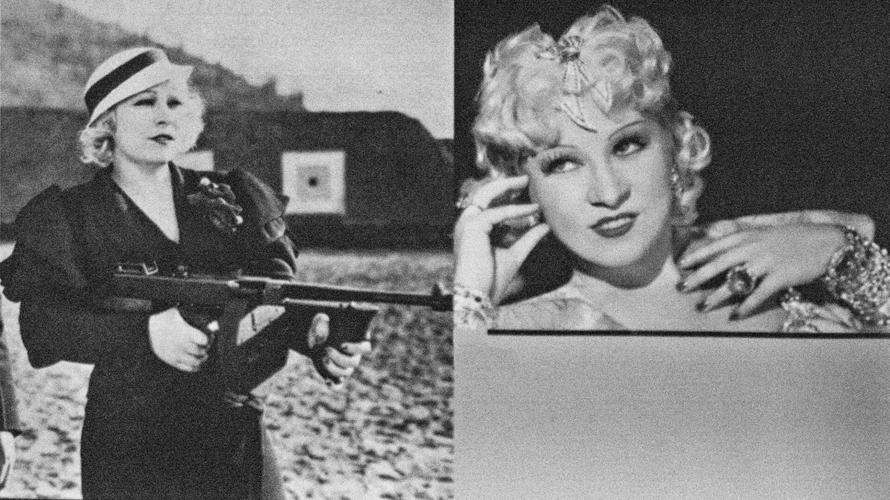 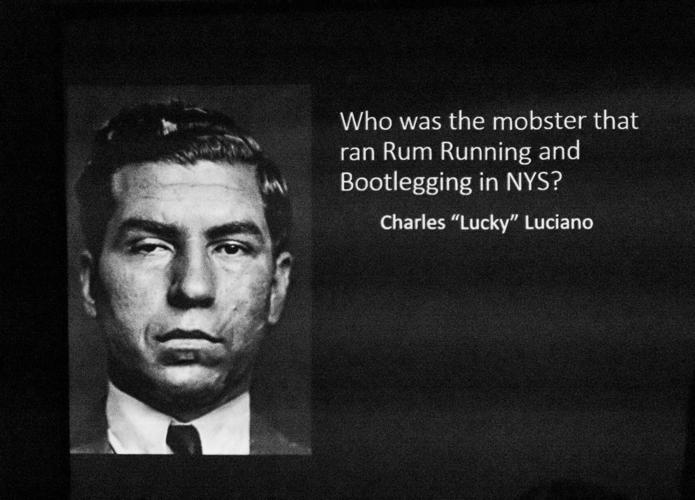 OSWEGO – Seventeenth-century British mathematician, Sir Isaac Newton, foresaw the 20th in the equations of physics. His third law of thermodynamics not only expresses the result of two pool balls colliding, it wraps up all change in its single paraphrased slogan, for every action there is an equal and opposite reaction. Thus the horror, death, and devastation of World War I led America to the Roaring ’20s, and the 1920 18th Amendment of Prohibition led to 13 years of ways around it, which in its own way, led John Lamphere, former Cayuga County Sheriff’s Office Deputy, to Oswego recently to tell the story.

Americans have long been fascinated with two things: crime and whiskey, and Prohibition provided them with plenty of both. Lamphere’s decades in law enforcement and personal interest in history easily led him to a fascination with Prohibition. And his easy manner, ready laugh, and somewhat self-deprecating humor remove any disguise he’s a man who’s averse to a few beers.

His historical presentation at G.S. Steamer’s on Wednesday evening June 1 to a packed room of at least 60 people, was an exceptional performance of trivia, humor, old photos, and local history within the larger context of bootleggers, speakeasies, gangsters and gun molls that played out here along the banks of Lake Ontario, site of a booze-smuggling operation that saw the likes of early mobsters Lucky Luciano, Dutch Schultz, and a host of others live and die for the hooch and massive cash that was our nation’s equal and opposite reaction to being told no.

The gangster celebrity extended to Hollywood’s celebrity. Mae West, the “Come up and see me sometime” sex symbol of her day “dated two of Lucky Luciano’s top lieutenants and lived in a hotel owned by a third. She was so big into those guys,” Lamphere related, “they taught her to shoot a machine gun. She was renowned for her time with them.”

Luciano was the kingpin of New York state’s illegal booze smuggling operation. “If you messed with Lucky Luciano, you did it once,” Lamphere said. “You didn’t do it twice. He may have been a mobster responsible for the deaths of 2,500 other mobsters, but he never killed a police officer, he never killed a judge, he never killed a civilian intentionally.” Lamphere continued, “He created an enforcement bureau that operated in upstate New York called Murder, Incorporated” run by Anthony Anastasia, a man known as “the Lord High Executioner.”

Lamphere, had done his research, and his lecture was filled with little-known statistics. “Eighty percent of the beer consumed in New York City came right down (from Canada) between Oswego and Fair Haven. Think about that for a second,” he said.

Not all those who got into the rum-running, as it was called, business came out of it alive. “There were in this area, our area alone, 222 rum runners killed either by storm, intentionally, or by the Coast Guard,” Lamphere said. But there was a lot of money to be made at a time America was going through the Great Depression.

As Lamphere noted, “Who the hell in his right mind would go across Lake Ontario in a 35-foot boat in January? You could make in one trip, a quarter of a million dollars profit. It was a highly, highly, highly profitable thing to these guys.”

In an interview following his lecture, Lamphere spoke on what got him into this historical lecture circuit.

“When I started really working on history, I focused mostly on the Civil War,” he began. “But then I started making presentations based on local stuff. That’s my thing. I believe history should be what’s in your backyard. I talk about local history because I want people to be proud of what’s in your community. My fee is, you give me a glass of water, and I’ll come talk. That’s all I want, and I do 10 to 15 a year, all over, everywhere. I’ve got a dozen different ones. I’ve got one on the Lincoln assassination; the Lincoln funeral train when it came through central New York; I have a quiz on how little you know about New York state history; I’ve got Mobsters, Molls, and Murder, Incorporated; Rumrunners. Except for the Lincoln assassination, I tie in multiple stuff.

“My mom was a reading teacher,” he continued, “so we had to read, and I chose history books. My brother’s the head chemist for the New York State Police. He read science books. And then I started a career in law enforcement. To me, it just kind of melded, because history is an investigation.

“For New York state, Long Island was huge (for smuggling booze). But that booze was mostly coming up from the Bahamas. That’s where the rum and the hard liquors and a lot of beer came from. What was so big about this area was, it was largely unprotected, and it’s out of the way, and the consumer wanted two principle things: they wanted beer and whiskey. Well, who’s known for their beer and whiskey? Canada. Largely an unprotected border. Still is today. And the profit margins were huge. Like I said in my presentation, what would prompt a man in a 35-foot boat to go across Lake Ontario in December and January? Well, because you could make $100,000 to a quarter of a million dollars.

“When I went to college here, it was always told that Oswego had more bars per square mile than any city in America. That was in ’76. That was the reputation back then. When I was in college, down all the side streets were local bars. I’m from Weedsport, which is outside of Auburn, and Auburn was the same way. When I first became a police officer, there were dozens and dozens and dozens of bars in Auburn. Here’s Oswego, a port city, a college city. Here’s Auburn the same population, we’re famous for a prison. They didn’t go out drinking a lot.”

Lamphere liked to tell of the little-known criminal side of some who became the great moguls of American history.

“In my area, where I worked,” he said, “there’s a state park called Fillmore Glen State Park – Millard Fillmore – well, you leave Fillmore Glen State Park and you head south southeast and you come down to, it’s called, Summer Hill, which goes into this little, tiny village called Homer. And there’s this huge valley down through there. It’s full of horses. Rockefeller was stealing horses and selling them in the Civil War to the Union. And that’s where they kept all the stolen horses. And if you ask the locals, they’ll tell you about that. Jackie Gleason had a house down there, and Jackie Gleason used to talk about that. The horses were on his property.”

And then there are the Canadian Bronfman’s of Seagram’s fame and Lord Thomson, media mogul and one-time owner of the Palladium-Times, both of whom allegedly got their starts in the booze and brothel businesses.

“I have no doubt,” Lamphere said of them. “All these guys got money from that thing. When I was teaching in London, I taught there for 15 intersessions, they said it was the same thing over there. They’d say most of the lords and ladies bought their titles doing stuff just like that. It’s not all hereditary, Excalibur coming out of the lake.”

It’s the underside of life we’re all so fascinated with, a side Lamphere fascinated us with about a week ago in Oswego.