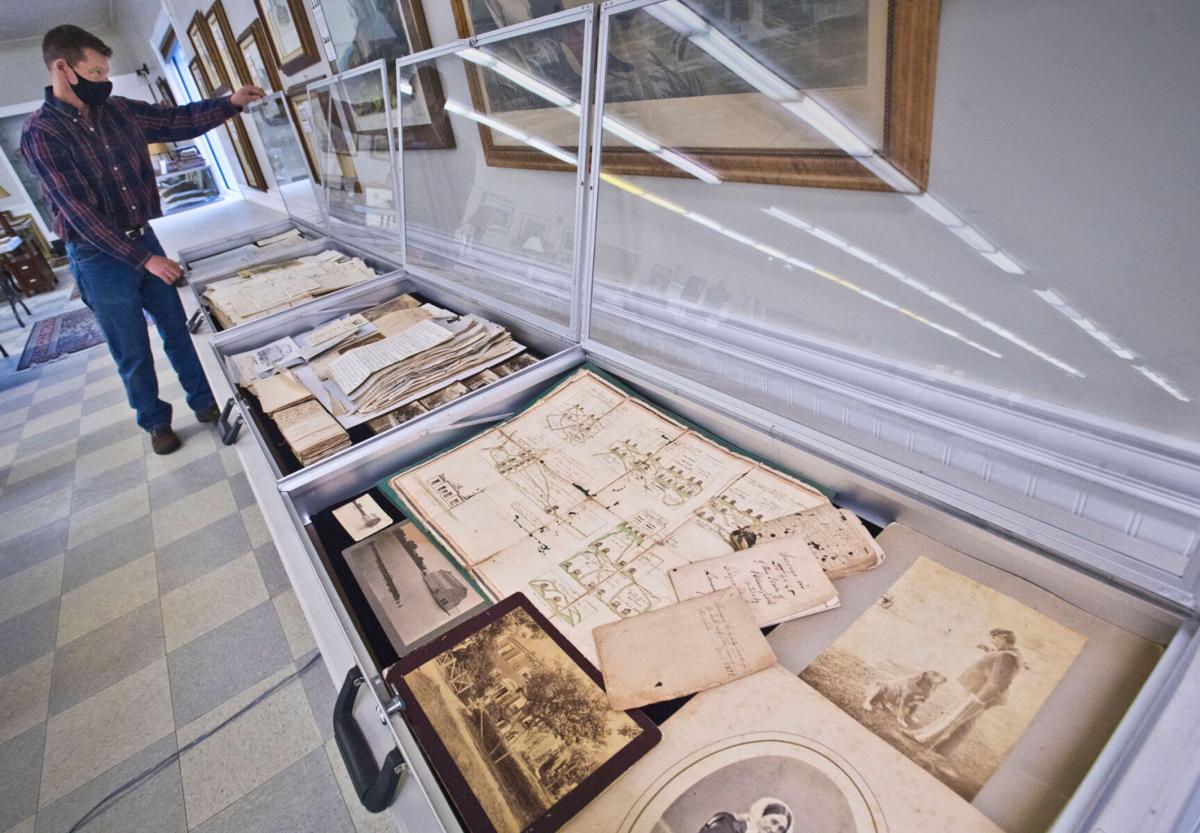 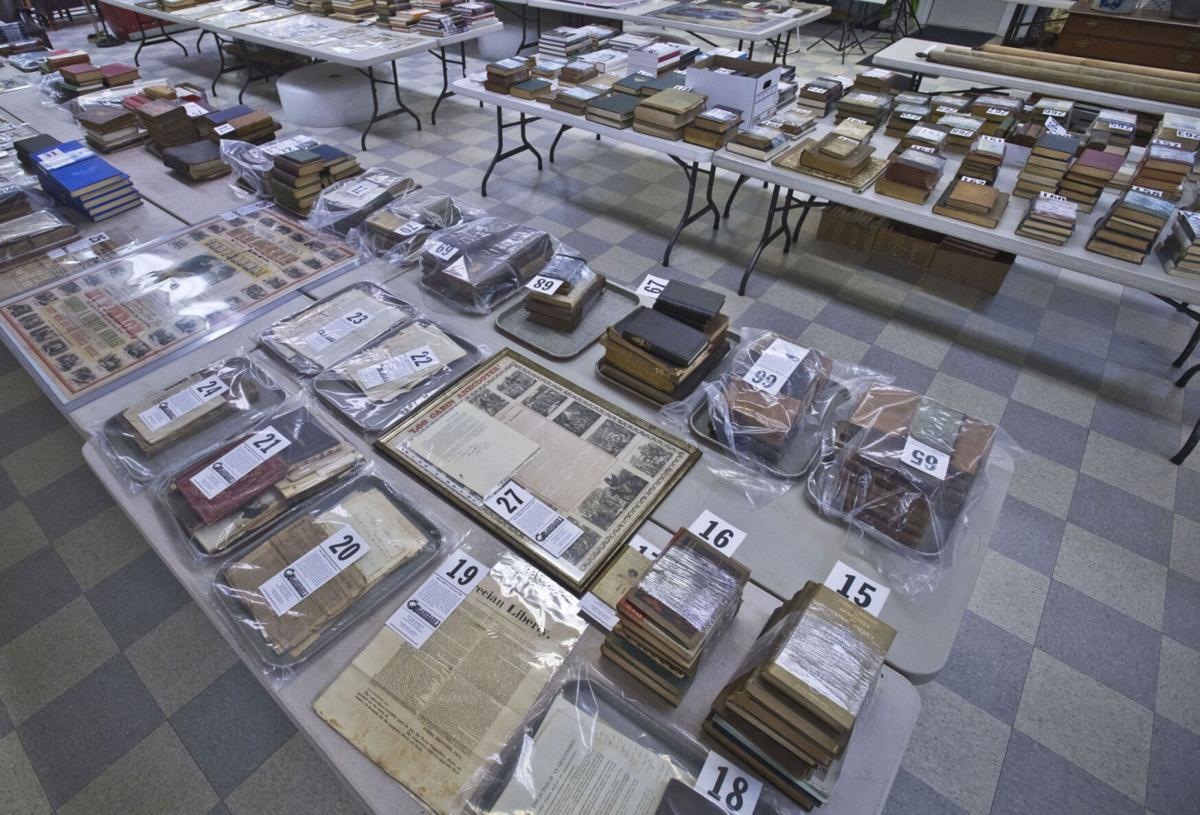 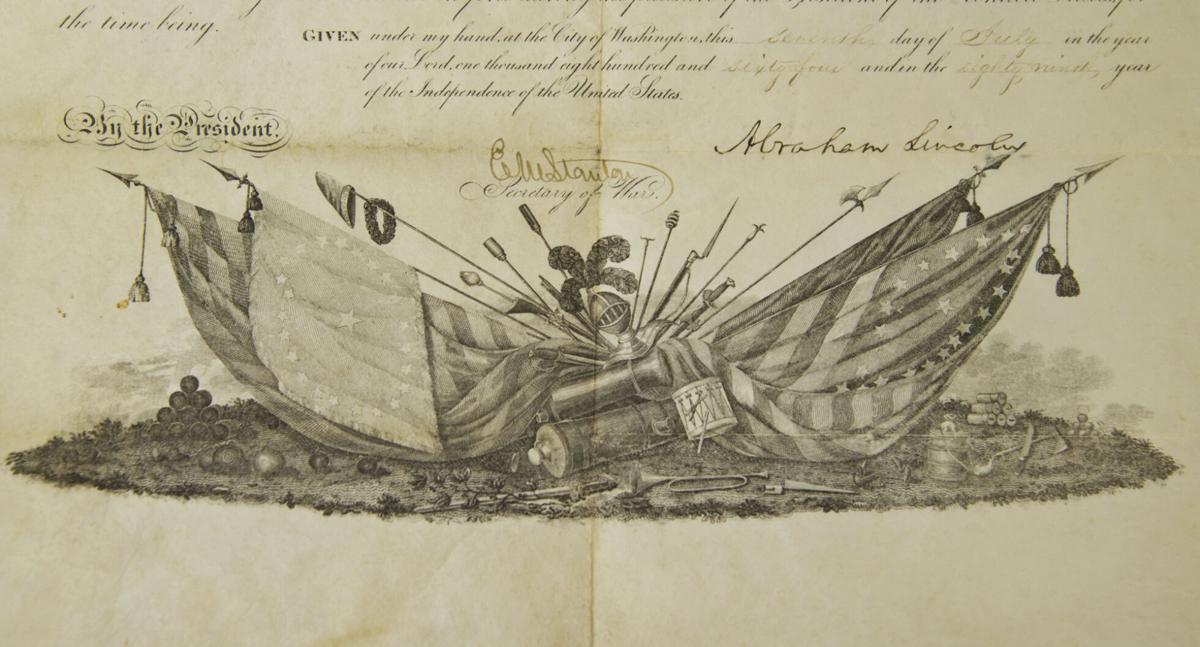 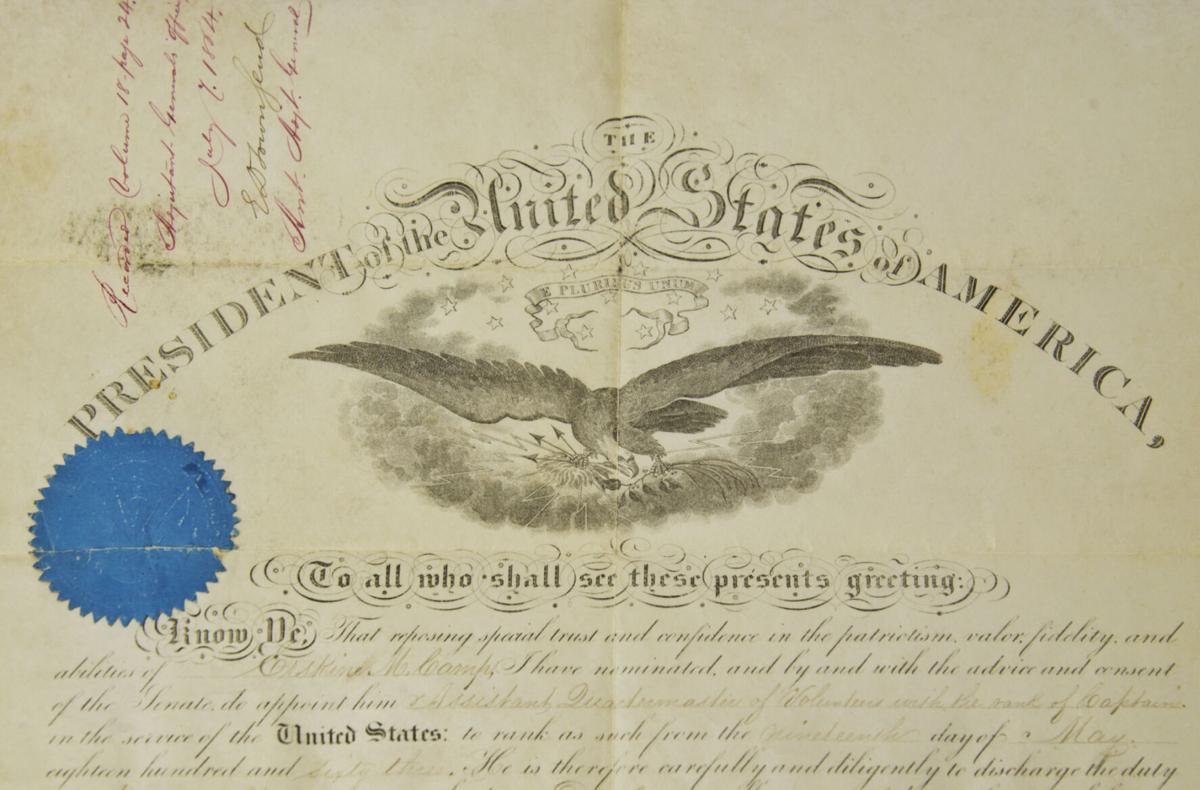 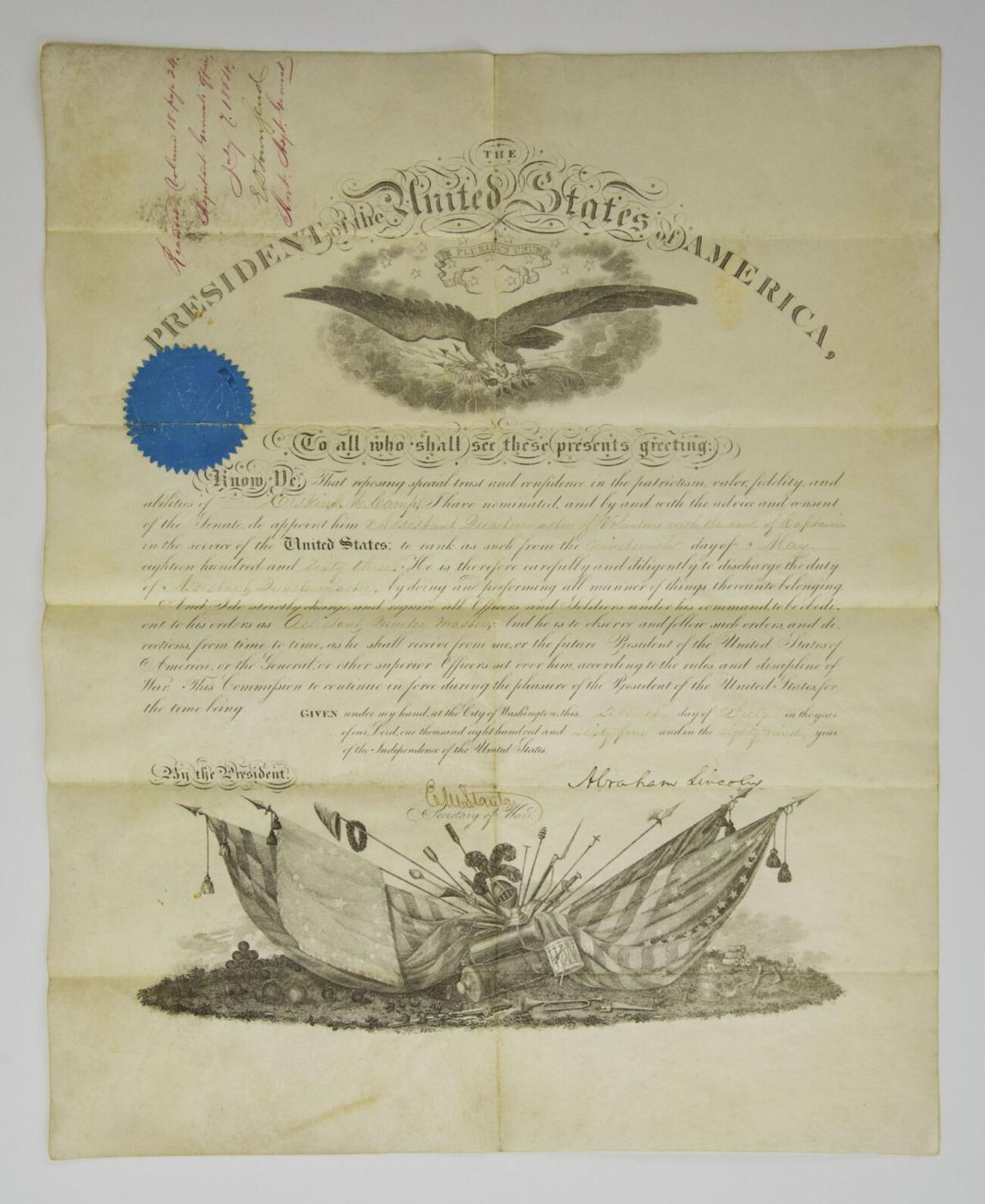 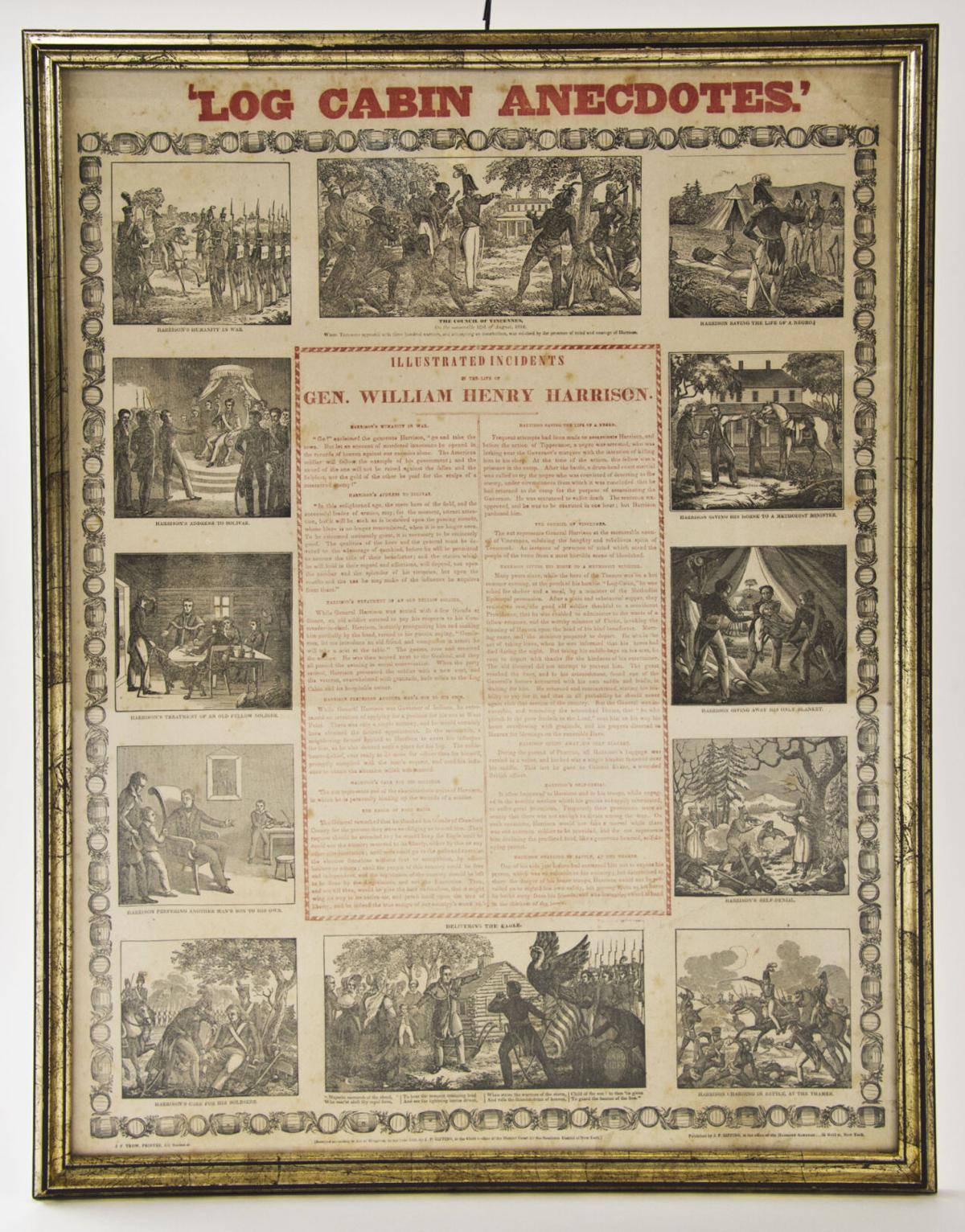 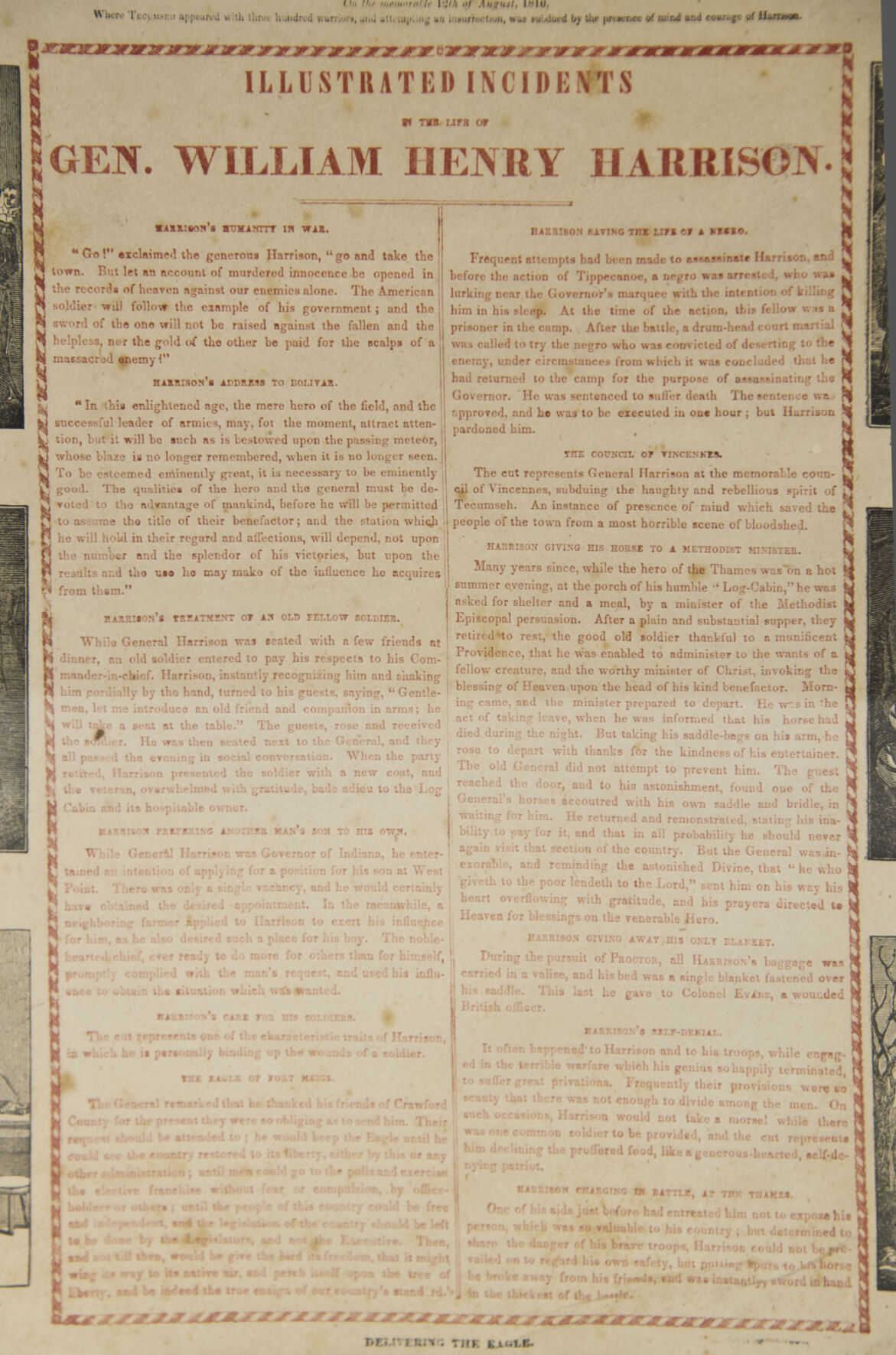 Descriptions of the Illustrated incidents of the life of William Henry Harrison on an 1840 Campaign broadside for Whig Party nominee. Christopher Lenney/Watertown Daily Times 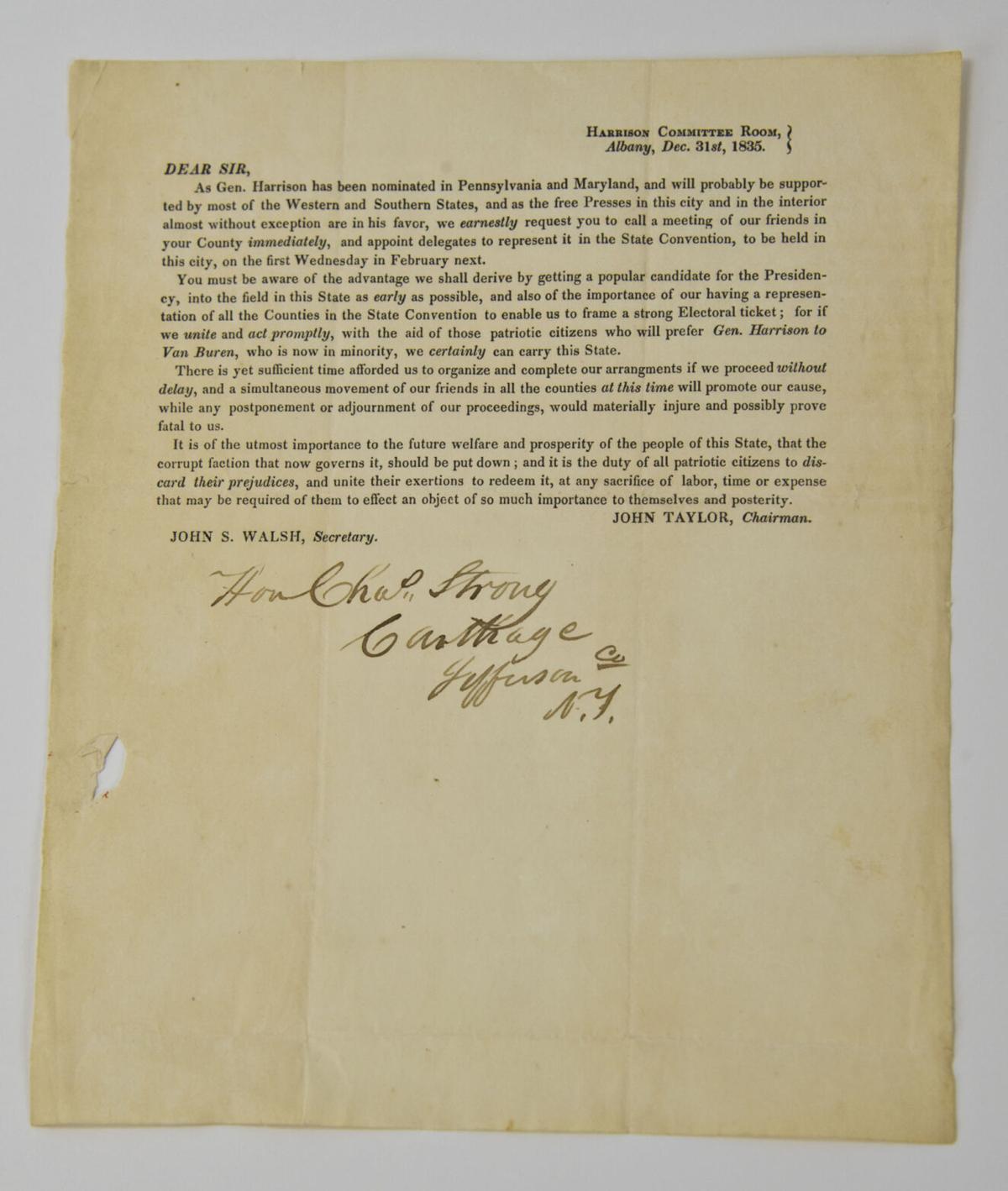 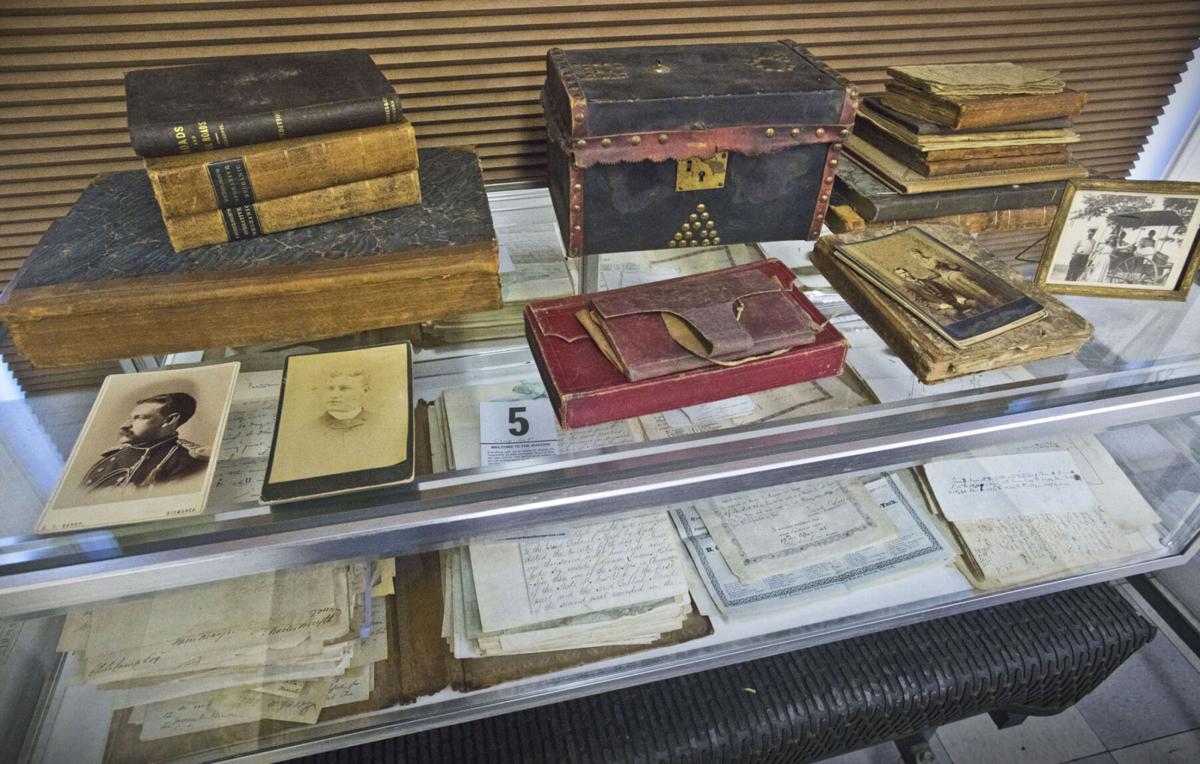 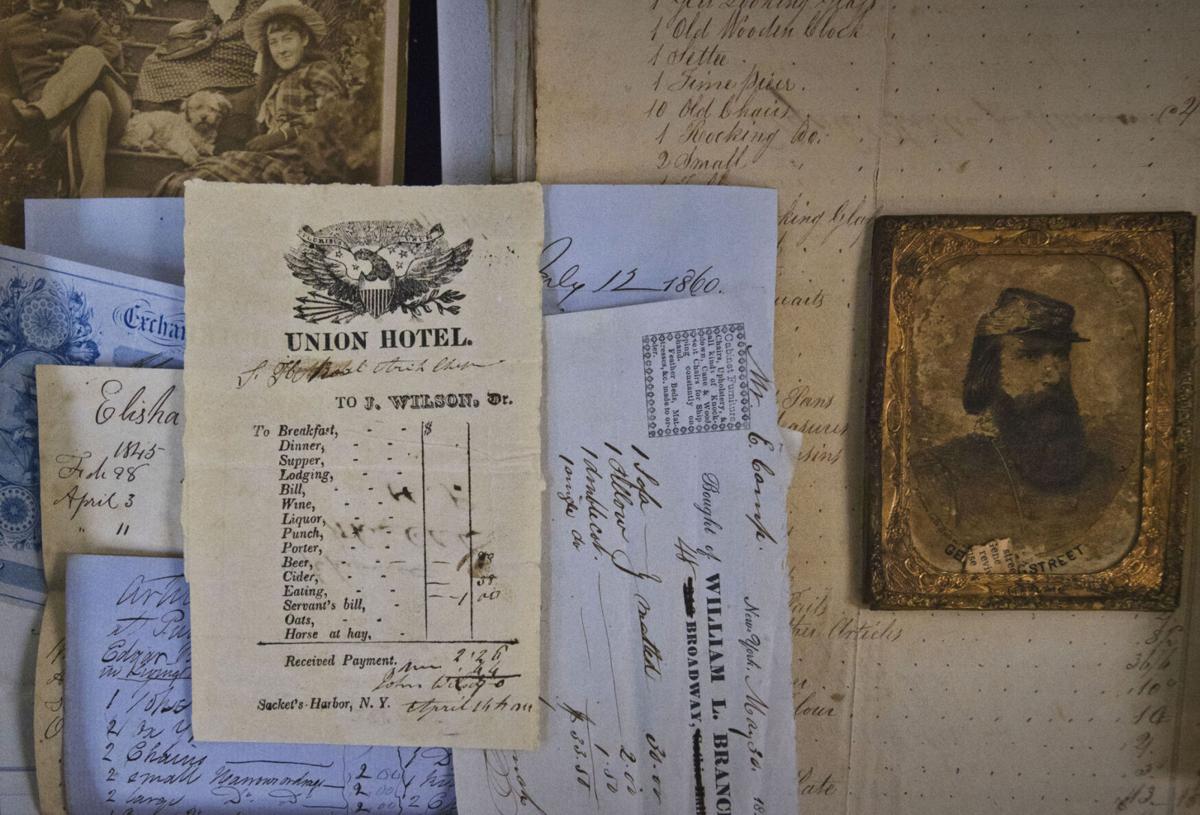 A very rare 1828 printed invitation to attend a military ball at the Union Hotel, in the village of Sackets Harbor. Christopher Lenney/Watertown Daily Times 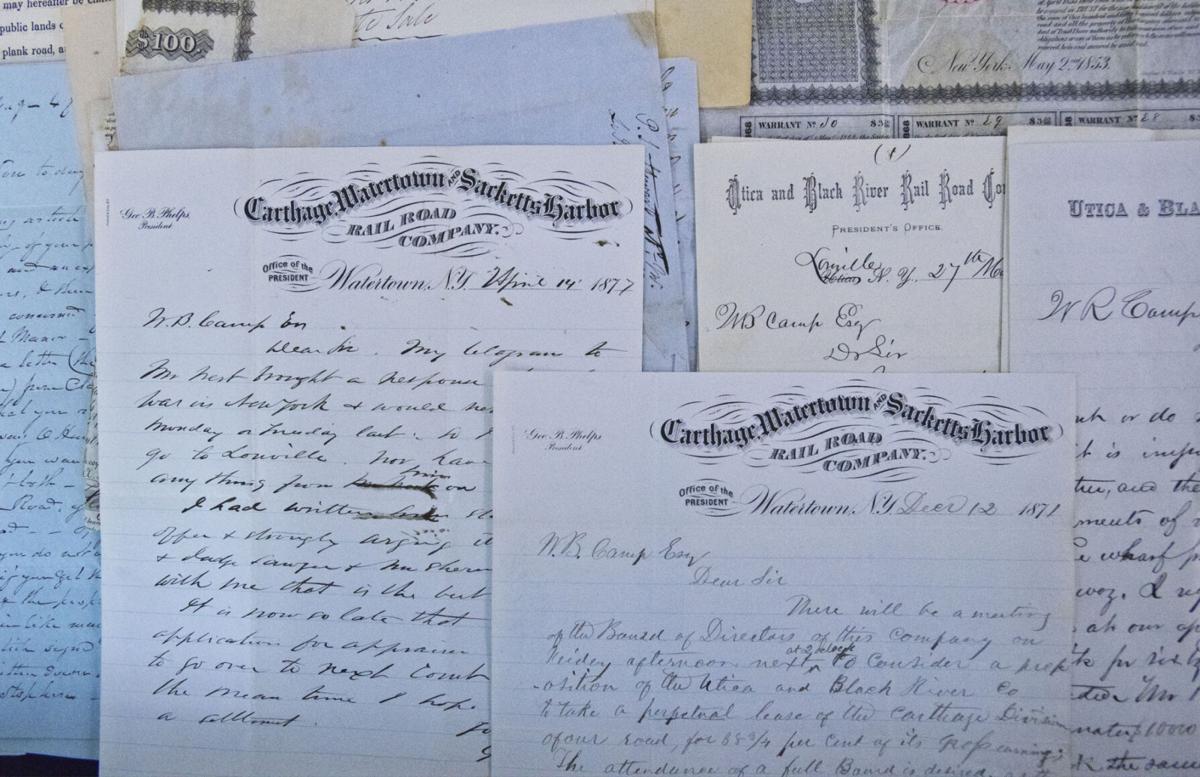 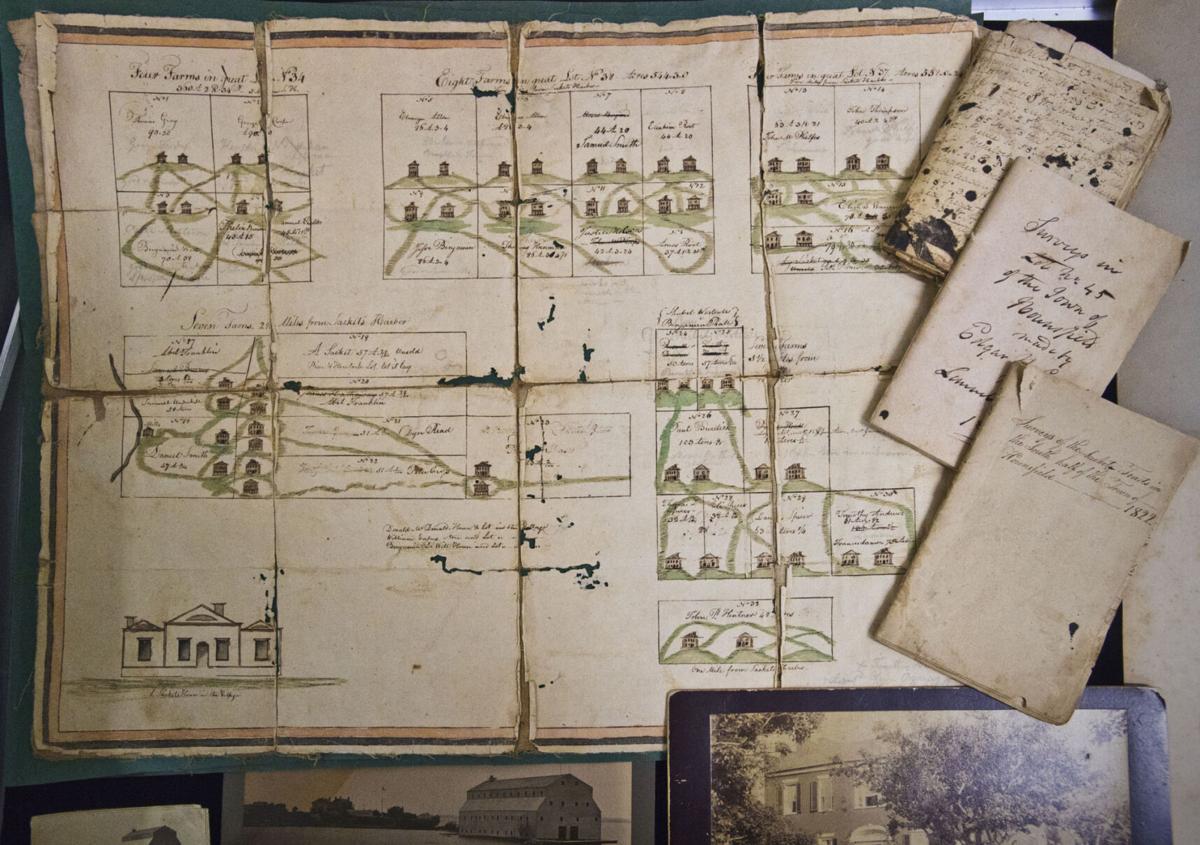 Descriptions of the Illustrated incidents of the life of William Henry Harrison on an 1840 Campaign broadside for Whig Party nominee. Christopher Lenney/Watertown Daily Times

Family has a tradition of donations, with more to come

POTSDAM — An online auction originating here Sunday will include historical papers, documents, broadsides, books and maps relating to Sackets Harbor that is attracting attention of potential bidders from all over the world.

The items have descended through the Camp family from Sackets Harbor. The material was recently removed by the Camps’ direct descendants from the Federal home that Col. Elisha and Sophia Hale Camp built from 1805 to 1815 and in which the descendants have remained until now.

Elisha Camp, brother-in-law of village founder Augustus Sacket, moved to Sackets Harbor in 1804. Mr. Camp arrived in the village after graduating from Columbia Law School and became one of the most prominent citizens of the north country. He wore a dizzying array of hats, including postmaster, militia officer, deputy New York state district attorney, politician, newspaper owner and editor, banker and a substantial landowner with a special interest in local mills, Lake Ontario and shipping.

The Elisha Camp house, Camp Manor, was placed on the National Register of Historic Places in 1973. It’s located between Hamilton Street and Camp Lane on General Smith Drive. It’s now for sale for $525,000.

“The old house got too big, cumbersome and too hard to maintain,” said George Smith, a great (x4) grandson of Elisha Camp. “It needs someone to pay the purchase price who is excited about fixing it up.”

Mr. Smith, an attorney, built a home across from Camp Manor, overlooking the lake.

Sunday’s auction will feature a large collection of historical papers, documents, broadsides, books and maps that have been carefully safeguarded by the family descendants for nine generations.

“We’ve got probably 500 registered bidders from 18 different countries,” said Kip Blanchard, auction firm owner and auctioneer. “There’s some founding documents for Sackets Harbor and stuff that just hasn’t been out and seen in the public, some of it for 200 years.”

But because Elisha Camp and his descendants who lived at the Camp House had industrial, military and other ties the world over and had many interests, the items up for bid have topics that stretch far and away from Sackets Harbor — all the way to Greece.

To help sort it all out, Mr. Blanchard called upon Keith Arbour, a historian from Cambridge, Mass., to research and categorize the documents. In 2017, Mr. Arbour assisted Mr. Blanchard by authenticating a 1776 printing of the Declaration of Independence, one of five surviving copies. It sold for $1.5 million.

In the summer of 2019, the document was displayed at the Museum of the American Revolution in Philadelphia.

“It was bought by a private collector who put it on display for the rest of the world to see,” Mr. Blanchard said. “Even though it was purchased by an individual, it doesn’t mean it went into their home and on their wall.”

The same fate could be in line for some of the items sold Sunday, Mr. Blanchard said.

“The one thing I did say to the family with all of this is, ‘The more these papers sell for, the better they’ll be cared for, for generations to come,’” Mr. Blanchard said.

A person’s expenditure, Mr. Blanchard said, means they are serious to preserve the item.

“If somebody gives somebody a letter, they may hang onto it, they may treasure it,” he said. “However, if somebody pays a thousand dollars for a piece of paper, they’re going to handle it much differently and it’s going to be cared for years to come as an important piece of paper.”

The family, Mr. Blanchard said, has donated items over the years to museums and historical associations.

“The downfall can be they can have great administration Sunday, and 10 years later, someone else comes in and says, ‘Let’s clean house and get rid of this stuff and that stuff,’” He said. “They don’t necessarily have the facilities for long-term storage and preservation or even the funds to do that.”

Mr. Smith said some of the items in Sunday’s auction are hard to part with.

“But on the other hand, I can’t keep it,” he said. “I don’t know where to keep it and to have people pay a purchase price for it, they’ll be good stewards of it. Instead of having it rot away in an attic, I’d rather have people able to read it, look at it and use it.”

Most of the items in Sunday’s auction, Mr. Smith said, were known.

“It was all in the house — the attic, some in the bedrooms, in the parlors,” he said.

But there were some surprises discovered, Mr. Smith said. One involved his great, great grandfather, Rodney Mason, who was a colonel in the Civil War and who became a patent attorney based in Michigan, and was once employed by Pillsbury Co.

The “Col. Rodney Mason” papers — ranging from a sleeping car patent documents to travel calendars — is lot 32 in the auction.

“I probably knew it was there, but not what was in it,” he said. “One of the things I’ve learned in all of this is that the attic turned into the family junk yard — a time capsule. He dies suddenly out in Detroit in 1893 and all of his stuff got loaded into this trunk by his partners and got shipped home, stuck up in the attic, and I don’t think anybody went through it.”

Going through his items, Mr. Smith said, gave him some clarity. For example, he discovered that Col. Mason was involved in patenting a new technique of grinding spring wheat to make it usable, which was perfected by the Pillsbury company.

“What’s really interesting is that my career sort of followed his career,” Mr. Smith, a patent attorney, said.

In a description of lot 32, the auction listing notes that Col. Mason’s work in the flour business, reflected “growth that had profound implications for not only the United States and the rise of its farm states and their economies, but also Great Britain and the decline of its land-owning aristocracy.”

Mr. Arbour said that lot number 32 is of special historical significance. It includes letters written by Col. Mason, which he made copies of before sending.

“Most of these letters would have been thrown out long, long ago,” he said. “But in Colonel Mason’s case, he kept absolutely perfect copies of his outgoing correspondence. That comprises alone, well over five thousand letters. The letters that he sent out and received are all about perfecting and defending the patents for machinery that was absolutely vital to the industrialized milling of wheat and the manufacture of flour by companies, for instance, that became Pillsbury. You’ve got an uninterrupted archive that sheds spectacular light on one of the principal reasons for the prosperity of our farm state.”

Other items in the auction include hand-drawn maps of Sackets Harbor and original surveys.

“There’s about two thousand items in lot number five, which is enough to write a book on Sackets Harbor,” Mr. Blanchard said. “It’s hard to tell who is going to be the end buyer. Is it going to be an institution, museum or library? We just don’t know. We tried to keep it as whole as possible.”

Mr. Arbour, who spent four weeks researching and cataloging the auction items, said that the manuscripts in the family collection amount to 20 linear feet of material.

“In any unexplored family archive, that is a tremendous cache of historic materials,” he said.

Mr. Blanchard said that people in Greece have expressed interest in lot 19, a “Grecian Liberty” 1824 “broadside’ single-sheet from 1824 Sackets Harbor reflecting a fundraising subscription. It promoted the citizens of Watertown, Sackets Harbor and nearby villages were raising money to support Greeks attempting to “overthrow Ottoman hegemony.”

“That broadside will interest many American historians and many historians of Greeks in America,” Mr. Arbour said. “Only in the past decades has an auction lot like this become internationally accessible. My guess is within five years, we’re going to see that tiny broadside printed in Sackets Harbor, in Athens in a major museum in an exhibit on the Greek independence movement. That shows just how tied in to the international scene people in a port like Sackets Harbor were, before 1830. They are gathering news, paying attention to markets overseas and paying attention to the freedom and the struggles for freedom of people thousands of miles away. It shows you just how interdependent people in upstate New York were with human beings all over the world. It absolutely flabbergasted me.”

Mr. Blanchard said that other notable items in the Camp Manor collection include:

n A poster of 1815 of village laws. “It’s a broadside that would have been posted up. It’s probably the only one known to still survive; a pretty rare piece.”

n Documents from 1807 and 1808 manuscripts recording how the village planned for and celebrated Fourth of July celebrations.

n Letters signed by presidents, including Abraham Lincoln, signifying the appointments of individuals.

“It’s an extremely rare book,” Mr. Blanchard said. “There’s only 200 copies known to exist. This particular book belonged to the family of the author.”

n An 1828 printed invitation to attend a military ball at the Union-Hotel, in the village of Sacket’s Harbor.

n Sunday’s auction will also include a collection of Derrydale Press sporting, local history and Thousand Islands books from Everett Foster’s (1942-2010) library in Clayton, along with Audubon books and lithographs from a home on Upper Saranac Lake and rare books from a Philadelphia, Pa. collection.