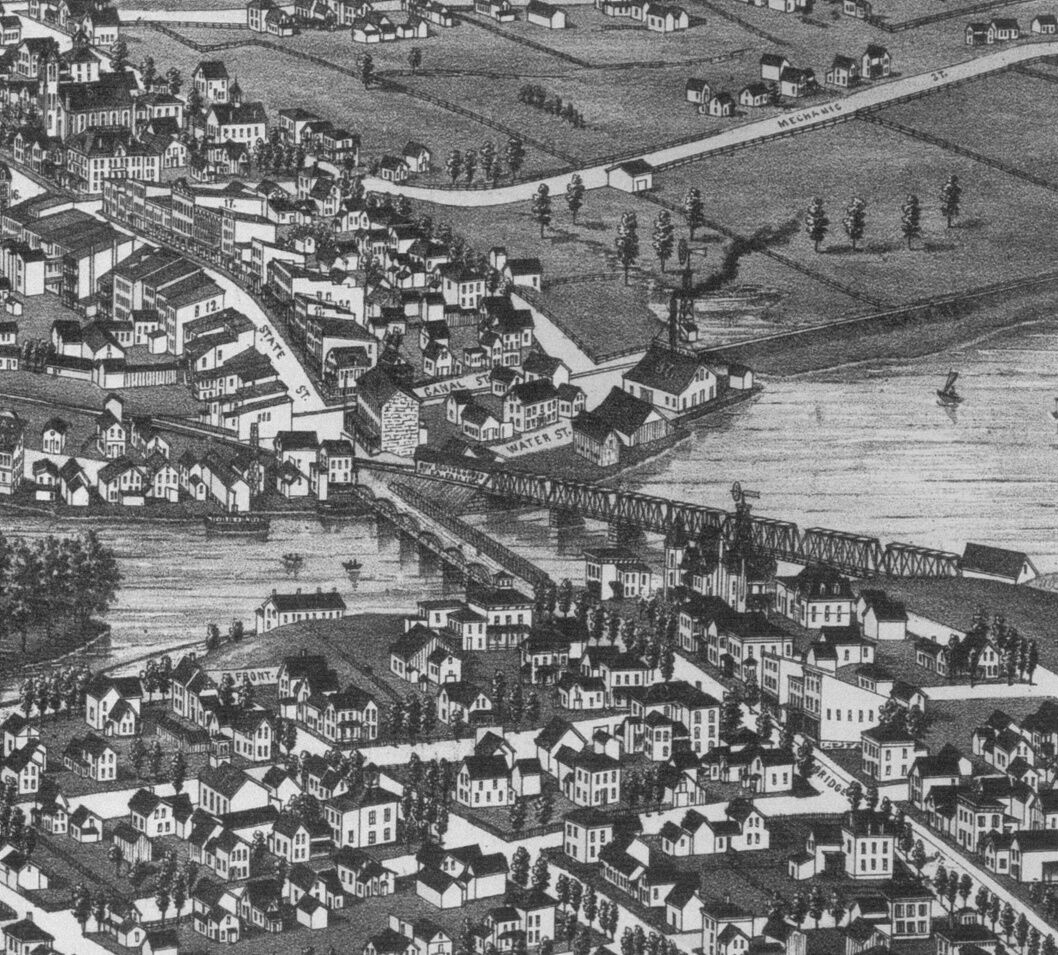 An early image of the Twin Villages. 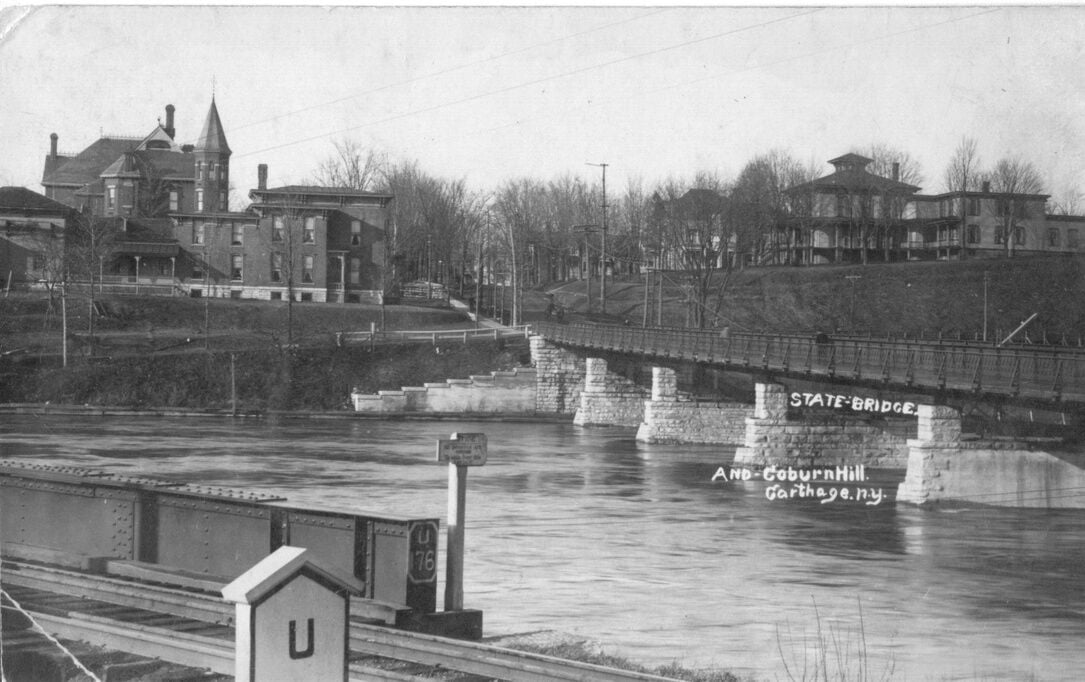 With the increase in traffic a sturdier bridge was constructed. 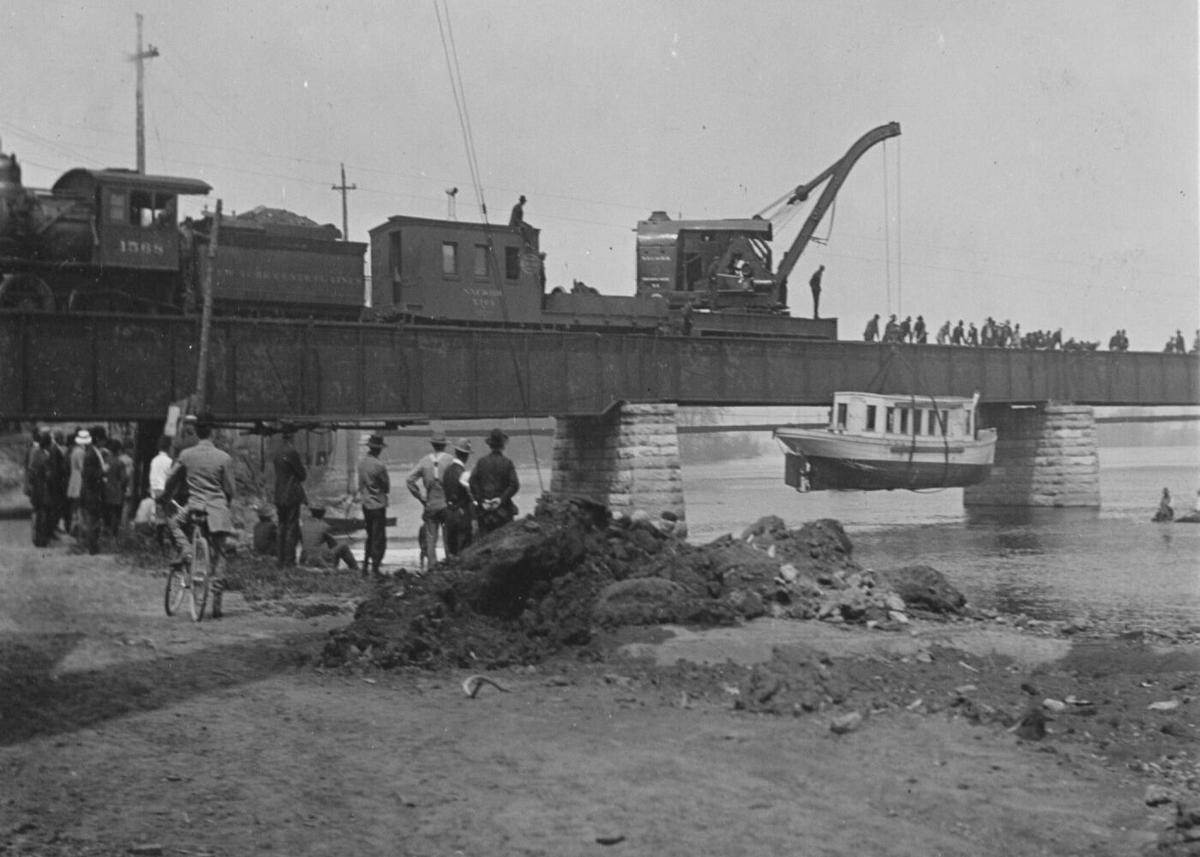 The railroad bridge spanning the Black River was once functional.

A number of bridges have connected the villages of Carthage and West Carthage. 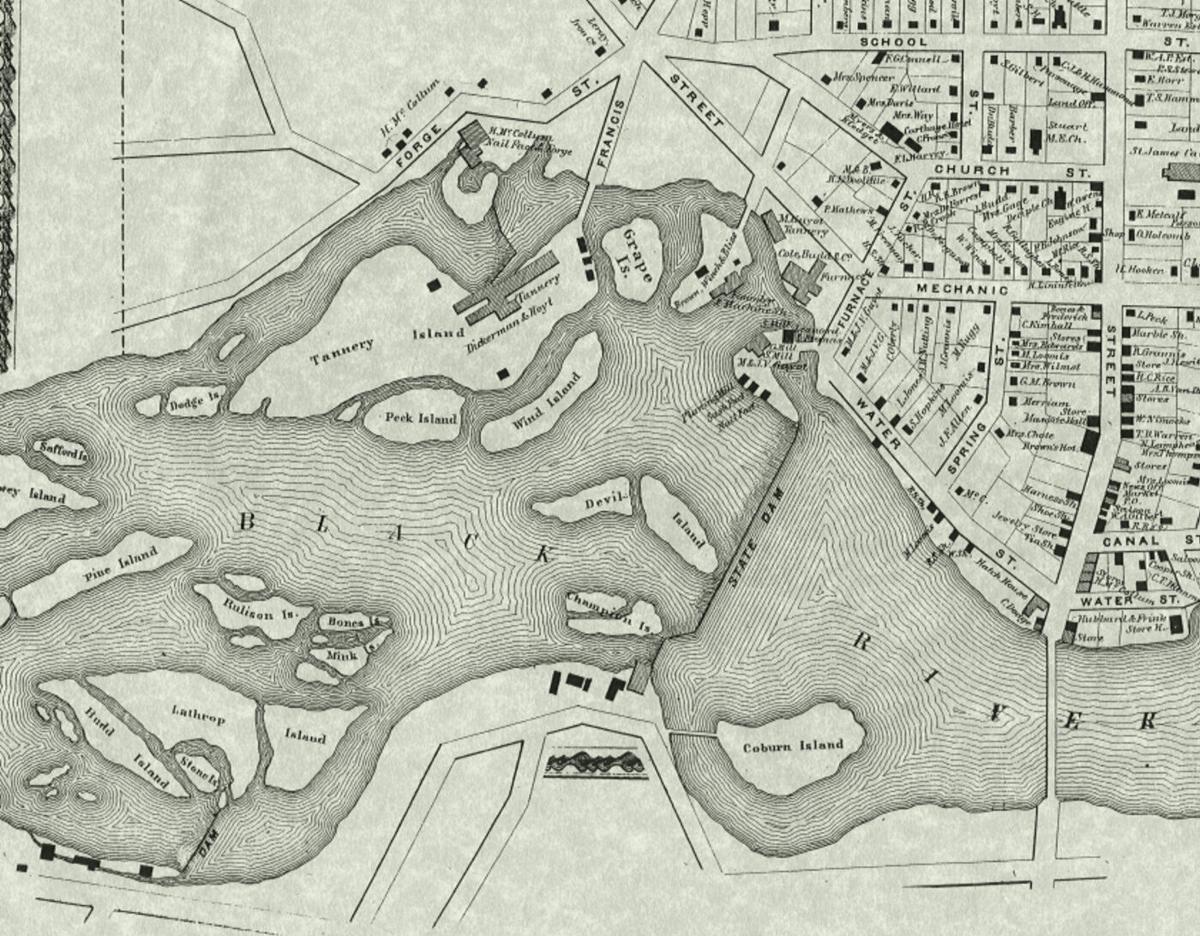 Bridges were suggested to link the islands in the Black River.

An early image of the Twin Villages.

With the increase in traffic a sturdier bridge was constructed.

The railroad bridge spanning the Black River was once functional.

A number of bridges have connected the villages of Carthage and West Carthage.

Bridges were suggested to link the islands in the Black River.

In the very early days of settlement at the landing belonging to Bossuot, on the banks of the Black River, the only way to the west side of the river was by ferry, a raft polled by the inn owner across the river. In the years 1806–1808, New York state cut through a right-of-way from Utica and Rome (then High Falls) along the river to Long Falls (later to become Carthage) Town of Champion, and from there to Oswegatchie (now Ogdensburg) and on to Russell.

The Turnpike Company constructed the St. Lawrence Turnpike in 1812-13. By adding another avenue to northern settlements, it made a bridge necessary to cross the Black River. Interestingly, many of the people had come this way by foot, and had walked the western side of the river from Herkimer or by boat, giving them a choice of landing.

Russell Atwater and his associates, interested in St. Lawrence settlements, were authorized by the Turnpike Company to build a toll bridge over the Black River where the state road leading to Oswegatchie crosses the river — at the head of the Long Falls in Champion.

The bridge, to be completes by November 1813, was planned and built for the Turnpike Company by Ezra Church. When the bridge was completed, the privilege of the first crossing was done by an auction and the highest bidder was Elijah Fulton of West Carthage, who gave jug of rum for the privilege.

The toll bridge was maintained until 1829. On March 28 of that year the wooden structure was found to be decayed and it was necessary to rebuild it. Early in the year an attempt was made to secure by public subscription funds to build a free bridge. A meeting was called and the old piers were purchased for $500.

About the same time, those interested in factories on islands in the lower part of the village (the most active being Joseph C. Budd) started a project to construct a bridge connecting the islands. Mr. LeRay came to the assistance and five bridges, going from island to island, secured a crossing. The bridges were damaged by the flood of the next spring, but were repaired. More damage was inflicted the following spring, and the structures soon fell into decay.

Meanwhile, those working for a free bridge above the islands gained influence and money. Dr. Eli West championed the cause and in the summer of 1829 the crossing was affected at the cost of $1,600. That bridge, built by H. G. Potter, lasted 11 years.

In 1840, when it was deemed necessary to rebuild the bridge, a meeting of the towns of Wilna and Champion was called. The outcome was an act passed in May authorizing loans from school funds — $2,500 town of Champion; $2,999 Wilna; $750 Le Ray and $750 Pamelia — for bridges in their areas, including Carthage-West Carthage.

With those funds, a man name Spaulding, at a cost of $5,000, constructed a covered bridge. It lasted until 1853 when a “substantial bridge was built by the State.” In October of 1860 this bridge broke down under the weight of a large herd of cattle. Some of them went down with the broken span and were killed or injured.

“On the morning of Tuesday of last week a drove of cattle passed through our village, and while attempting to cross the bridge, over Black River, the first span of the bridge gave way, and about fifty head of cattle were precipitated into the river. A large number had passed the first span before it fell, those running furiously over the remaining portion of the bridge, the last span adjoining the Champion side of the river also gave way and fell, with some fifteen or twenty head of cattle. We learned that two of the cattle were so badly injured that they had to be immediately slaughtered … During that day the sidewalk bridge was made passable and it is expected that by Saturday next the bridge will be again passable for teams.” — Carthage Republican Tribune, Oct. 18, 1860

The bridge was repaired, but one year later a Mr. Crumb, a well-known teamster, broke through the bridge while crossing with a load of pig iron. The iron slid out of the box and the horses swam ashore with the wagon while the box floated downstream and lodged against one of the islands. Mr. Crumb was rescued unharmed.

“On Wednesday last, two stretches of the bridge over the Black River at Carthage broke, and two teams which were then on the bridge, were precipitated into the river, and Mr. Samuel Chadwick, about thirty-five years old, and a boy about ten years old, named Henry Irwin, son of James Irwin, both of this village, lost their lives.” — Carthage Republican Tribune April 4, 1865

An inquest was held on the death of Henry Irwin and evidence was put before the jury that the bridge had been unsafe for the previous two years and that the contractors for keeping the bridge in repair must have known it. The jurors decided that the young boy had met his death through the neglect of persons unknown who should have repaired the bridge and that “the bridge was so far rotten, decayed and out of repair that it cannot be repaired so as to be safe for the traveling public and that a new bridge was imperative.”

The covered bridge was replaced in 1865 by a fourth bridge, a substantial iron structure constructed by the state. An April 1853 act had declared the bridge the responsibility of the State on the grounds that it was over a portion of the river acknowledged to be part of the Black River Canal.

On June 13, 1865 The Republican reported that {State} Commissioner Skinner had taken charge of the bridge and had sent an engineer and contractor to check out the bridge. Although made temporarily safe by H. Rulison, a decision was made to erect a new “iron chord bridge” as soon as the materials could be procured.

On September 26, 1865, The Republican (a former Carthage area newspaper) indicated that work was progressing on the new iron bridge, with engineer O.L. Wetmore of Booneville supervising construction. Early in October, while placing two of the arches on the new iron bridge, the arches with the old timbers fell into the river and Moses LaRock was “considerably injured in his hands and limbs, by falling into the river at the time of the accident.” This is the bridge depicted in the sketch of the Carthage Fire of 1884.

In 1872 the railroad was extended into Carthage and a railroad bridge was built at the time. According to the Republican Tribune for March 14, 1872, “the freight train on the Utica and Black River Railroad which left Watertown yesterday morning met with a serious accident just before entering the covered bridge this side of Carthage. Three cars jumped the track and fell into the river. One of the cars was loaded with potatoes owned by John Winslow Jr. The covered bridge was seriously damaged and the track was torn up the length of the bridge. About a week will be required to repair the damage”.

In 1896 New York State built the Twin Villages’ fifth bridge, wider and stronger, but by 1942 that bridge was in need of replacement. Increased traffic and the additional weight of that traffic had caused much wear and tear on the existing structure.

In April of that year there was an article in the Carthage Republican Tribune that the idea of constructing the new Carthage-West Carthage bridge might have to be put on hold in deference to a state road from the Deer River Corners in West Carthage to Great Bend and Pine Camp (now Fort Drum). It was stated that the new road would give Pine Camp a straight road south that would fit in with the “new” Deferiet-Fargo road that gave the camp direct access to the north route. In this way, Pine Camp would become a traffic center with direct routes from that point rather than from Carthage or Watertown.

The next bridge was finished in 1948 at a cost of $135,000 authorized by the state legislature. Interesting information in the November 1947 Carthage Republican Tribune describes moving the old state bridge fifty feet upstream onto temporary piers while the new span was being completed. Vehicle traffic was detoured through Great Bend and it was reported that West Carthage deliveries were a serious problem for most firms and this was further complicated by construction on Route 3 and the closing in November of the Castorland-Naumburg bridges to heavy loads.

The next bridge, the one used today, was built by the Tuscarora Construction Co. of Pulaski over a period of 18 months in 1994–1995. It was done on contract with the New York Department of Transportation at a bid price of $4,059,689.75. There were periods of time when the bridge was closed to pedestrian traffic and the author remembers riding a shuttle bus to conduct business on the Carthage side of the river.