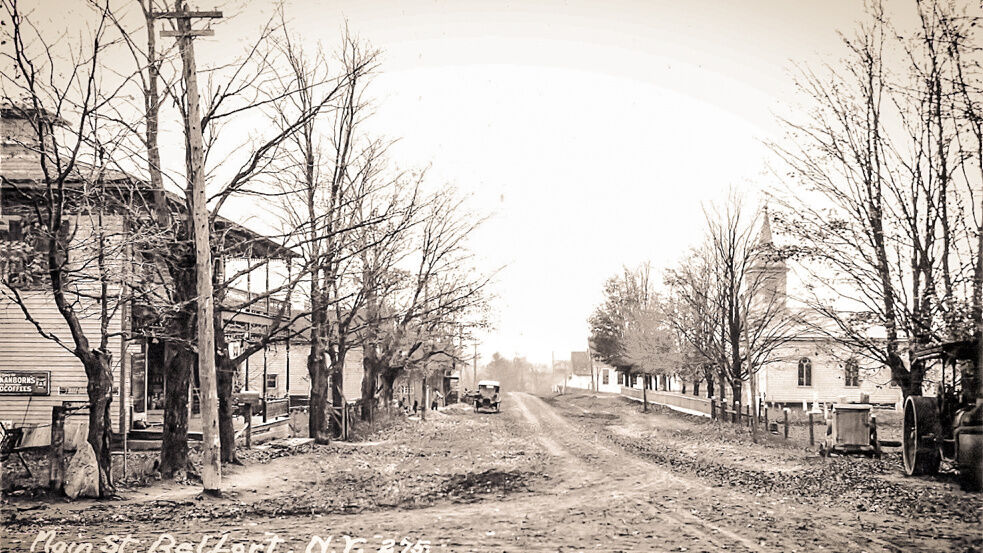 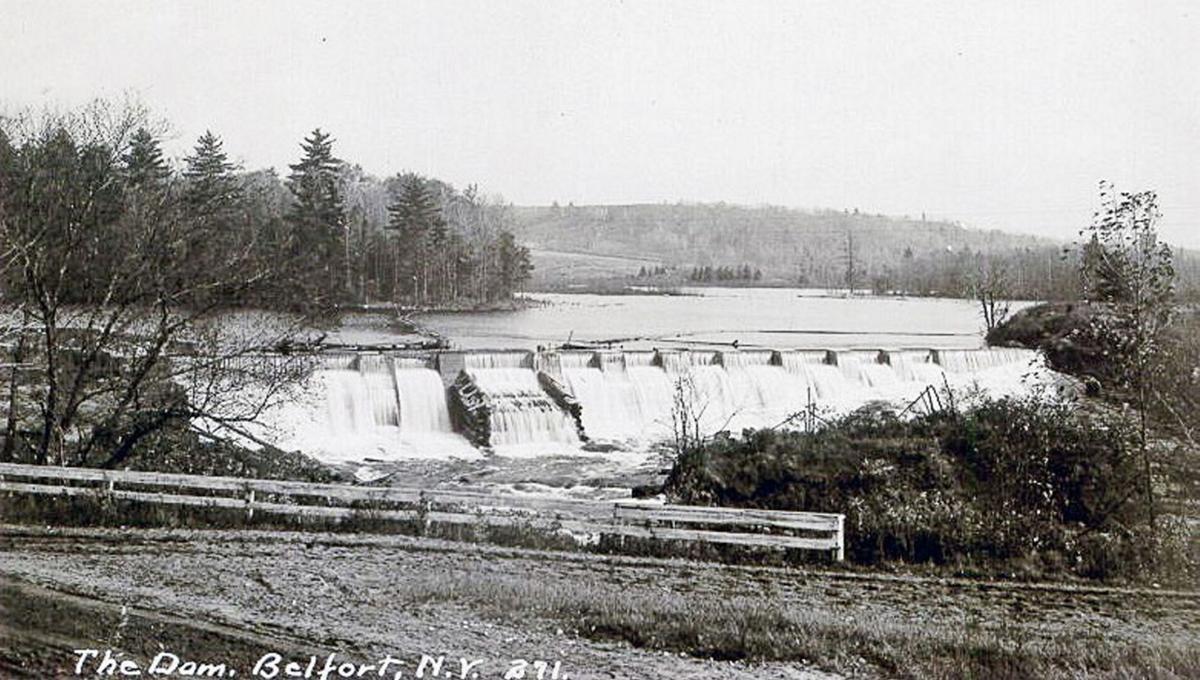 The dam at Belfort Town of Croghan Photo 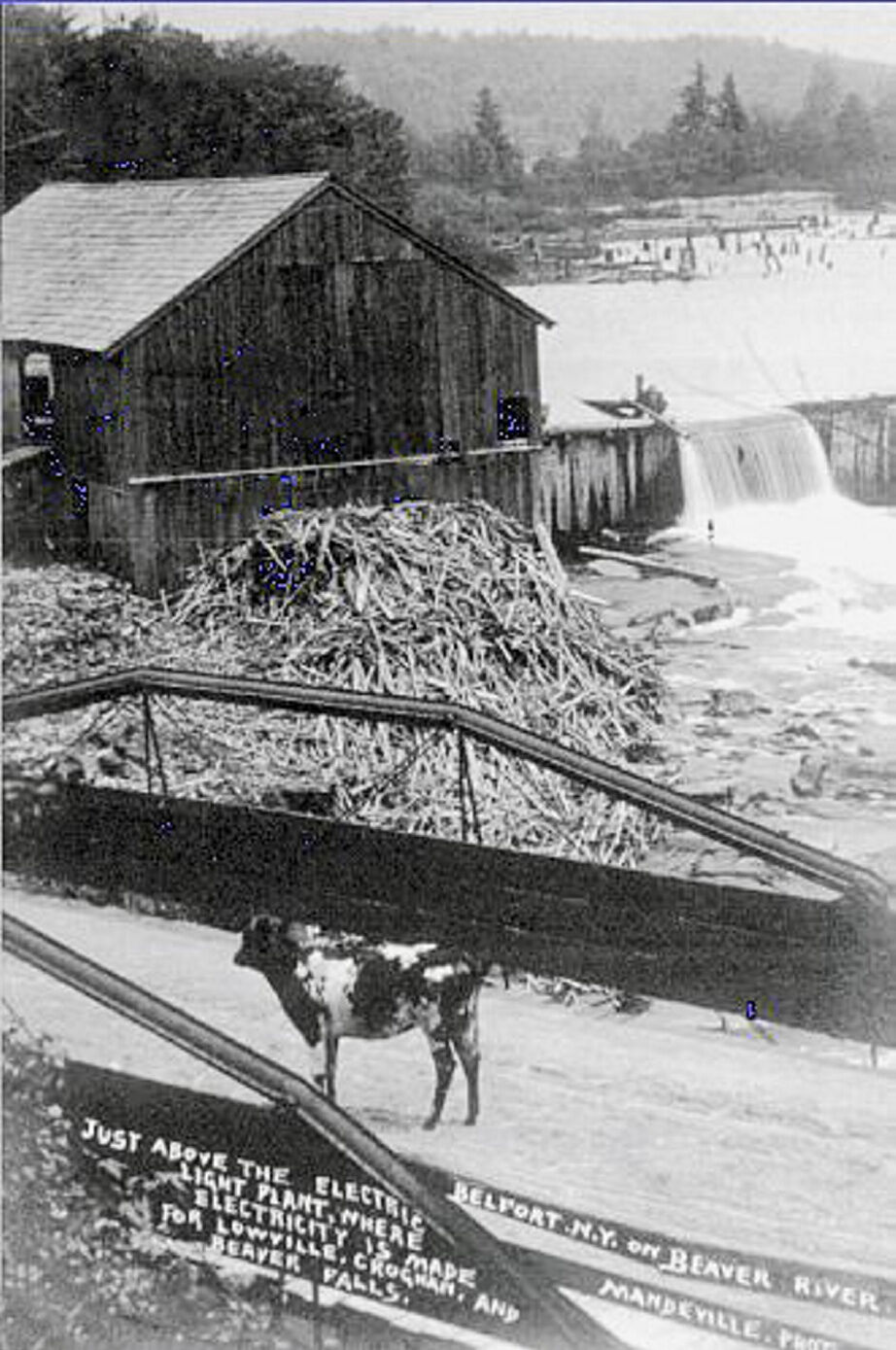 Bridge across Beaver River at Belfort Town of Croghan Photo 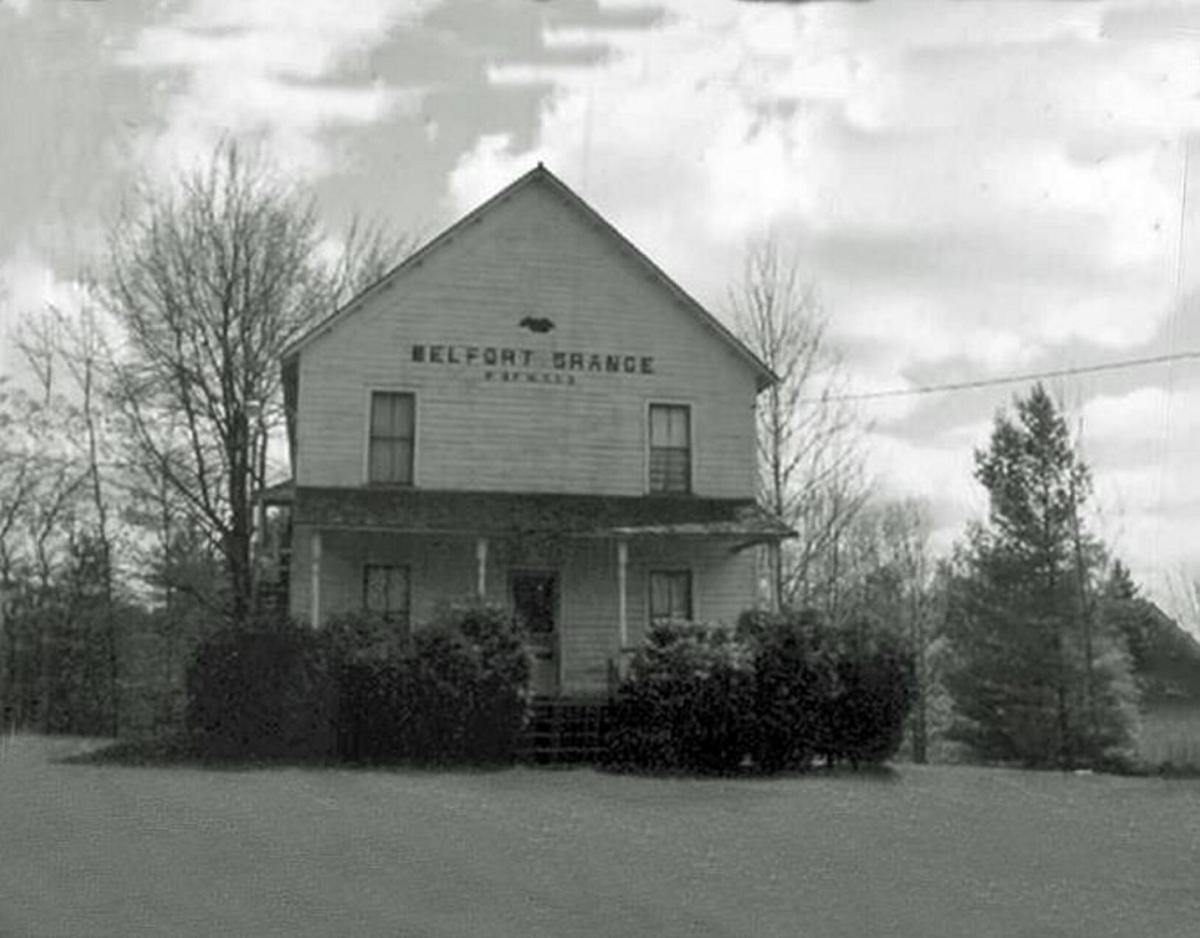 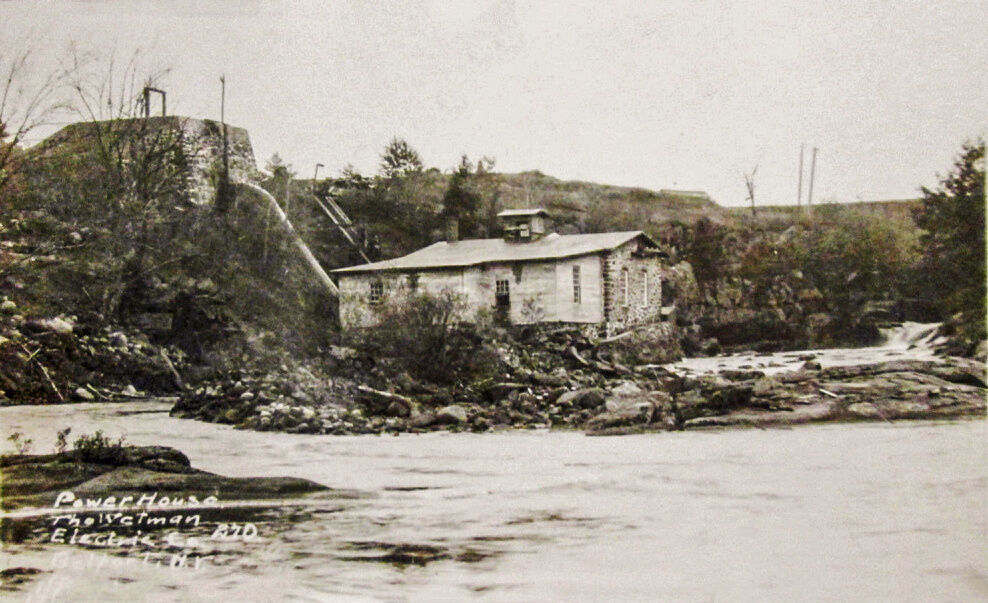 The Powerhouse at Belfort Town of Croghan Photo 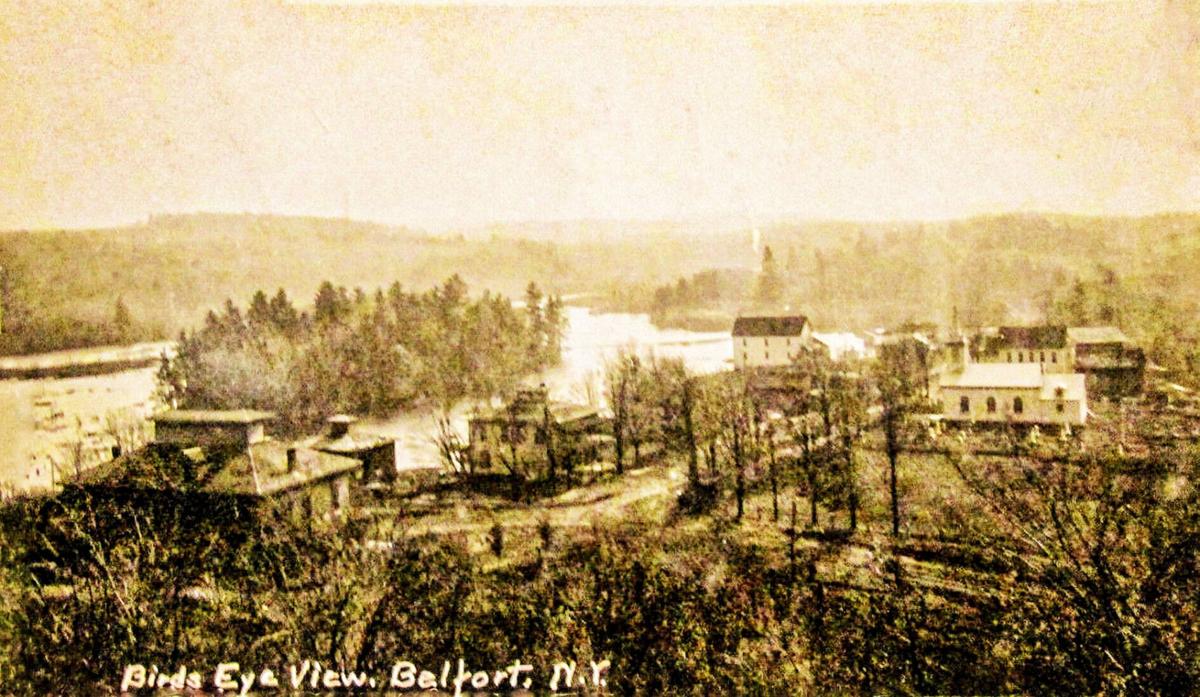 A bird’s eye view of Belfort Town of Croghan Photo

The dam at Belfort Town of Croghan Photo

Bridge across Beaver River at Belfort Town of Croghan Photo

The Powerhouse at Belfort Town of Croghan Photo

A bird’s eye view of Belfort Town of Croghan Photo

The oldest community of any note in the town of Croghan, the hamlet of Belfort, dates back tothe 1830s. The site for the Settlement chosen because of the availability of waterpower. Here the Beaver River flows through a narrow gorge, which believed, would attract industry and a sizable village would develop. Around 1824, a road was cut out from the Black River in Watson, northeastward to the St. Lawrence turnpike. Built by Watson and Le Ray and it still bears the name of the Erie Canal

Road. It passes through Belfort and the Bent Settlement.

A fire occurred on May 30, 1831, from a fallow, which consumed the only two buildings then finished. A post office named Monteray located here and discontinued in 1917 after the route changed.

The tannery of Mr. Rice was built in 1857 and burnt on Sept. 15, 1865, and with it a large quantity of leather. It was soon rebuilt and had tanned as much as 35,000 sides of sole leather a year, used 3,500 cords of hemlock bark, employed 23 men through the year and 50 in the bark season. It shipped 500 tons a year upon the railroad. Built by William H. Pier and known in the trade as the Croghan Tannery.

Between the years 1843 and 1844, a church was erected at Belfort to attract settlers. However, some organization of a Catholic Congregation is believed to have existed since 1832. St. Vincent de Pauls was still in use until 1989 when it was closed due to a lack of priests. St. Vincent de Pauls is reported to be the oldest church of this faith still, standing between Utica and Canada. During the 1870s, the population of Belfort was from 50 to 75 inhabitants. In 1864 the tannery was sold to James Morrow, a Jefferson County resident and gave employment to several men from the area, along with gristmill described as little more than a barn with a stream of water running through it.

According to a July 19, 1871 article, Mr. Morrow’s tannery at Belfort is no small matter. It is a neat, tidy looking building, and everything about it has the same appearance. Mr. Morrow is well posted in the routine of business matters, with a sociable, gentlemanly turn. The tannery has a capacity of from 20,000 to 25,000 sides of sole leather annually, consuming from 2,000 to 3,000 cords of bark timbered from the nearby land. The revenue received went to farmers within a circle of 10 or 12 miles and is an important item, thanks to the enterprising tannery men. The income received from the sale of the bark helped a man that is in debt for his land to pay it off.

In 1874 to Samuel Banaugh, a resident of Carthage purchased the tannery. He then acquired a tannery at Croghan and had three tanneries in operation simultaneously for some time, one each at

Carthage, Belfort and Croghan. In 1893, when he sold the Belfort tannery to the United States Leather Company, Branaugh retired from active business. The tannery was closed the following year due to the depletion of bark in the area. Except for the written word and word of mouth, no evidence of a tannery in Belfort exists.

The tanning industry that began in southern areas moved northward when the vast stands of hemlock were exhausted. In the summer the trees were cut, the bark was peeled and drawn to newly built tanneries in Belfort, Croghan, Beaver Falls and Jerdon Falls.

The peeled logs were left to rot in the woods until a young entrepreneur realized the value in sawed timber.

Theodore B. Basselin of Croghan bought the abandoned logs and sawed them into lumber, which he shipped to downstate markets on the canal. Business was good, and in the 1880s, he had several hundred men working in the woods and sawmills. Much of his timberland was north and east of Belfort when lumberjacks cut and piled logs throughout the summer. When winter set in local farmers and their teams hired out to haul the logs to landings on streams and ponds to await spring breakup when logs were floated downstream to various sawmills.

By 1880 the population of Belfort had increased to about 132 residents. Belfort, described in 1883 as having a tannery, a store in connection with the tannery, a gristmill owned by Peter Yancey Jr., a sawmill [Joseph Yancey], hotel [Louis V. Bisha] along with a few dwellings. The land surrounding Belfort is productive soil with many well-to-do farmers, while the soil in Belfort its self is unproductive.

The Methodist Church at Belfort held a dedication on November 23, 1887. The Rev. B. F. Wood had charge of the service with Rev. R. E. King of Port Leyden preached the sermon. In 1906 this church property was purchased by the school district to replace the schoolhouse that recently burned.

In 1898 Lafayette Wetmore formed a corporation known as Wetmore Electric Company. In the fall of 1898, construction began on Belfort’s first hydro-electric plant and completed in 1899. Through the years several other electric plants were built along the Beaver River,

The area north of Belfort, well known for its timber, was also known for its hunting and fishing business. Hotels such as the Bald Mountain House, the Grant House, renamed the Oswegatchie Inn located on Long Pond, were well known for their excellent hunting and fishing. In 1909 Peter and Lola Yousey started their guild service and would later become Yousey’s Hotel and Camps, also catering to the sportsmen.