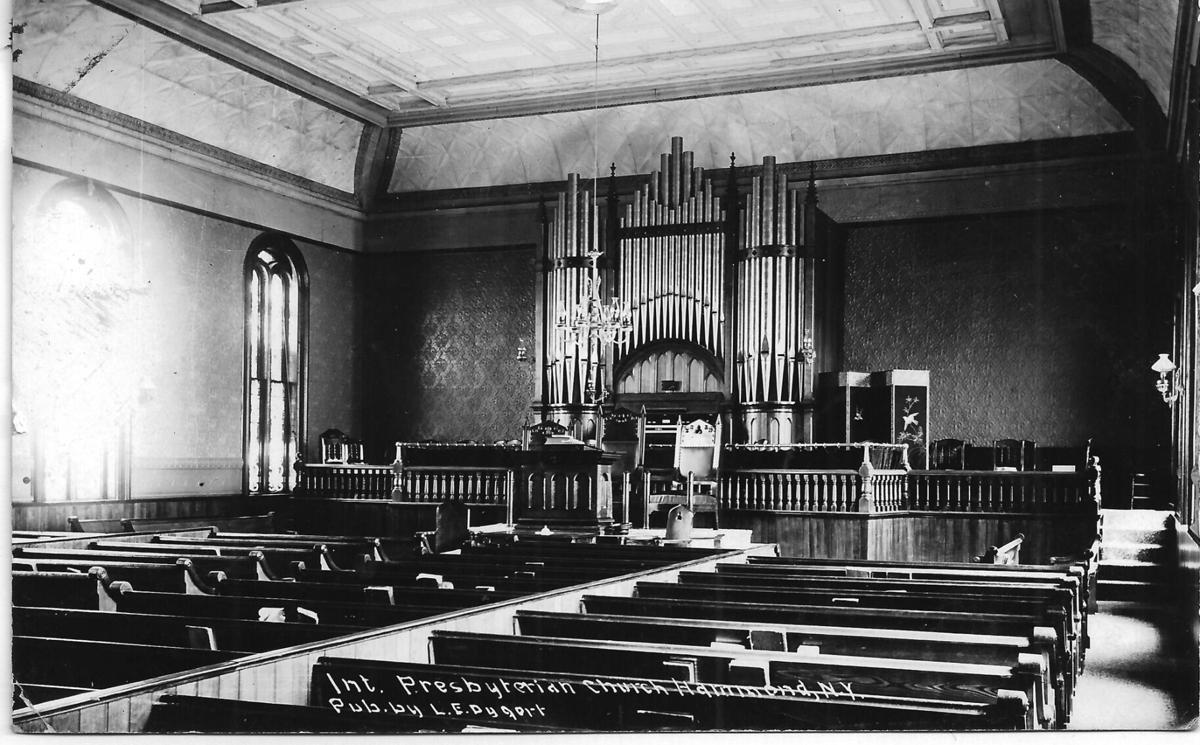 This photograph, provided by Hammond Historian Donna Demick, shows the inside of the Hammond Presbyterian Church. Submitted photo 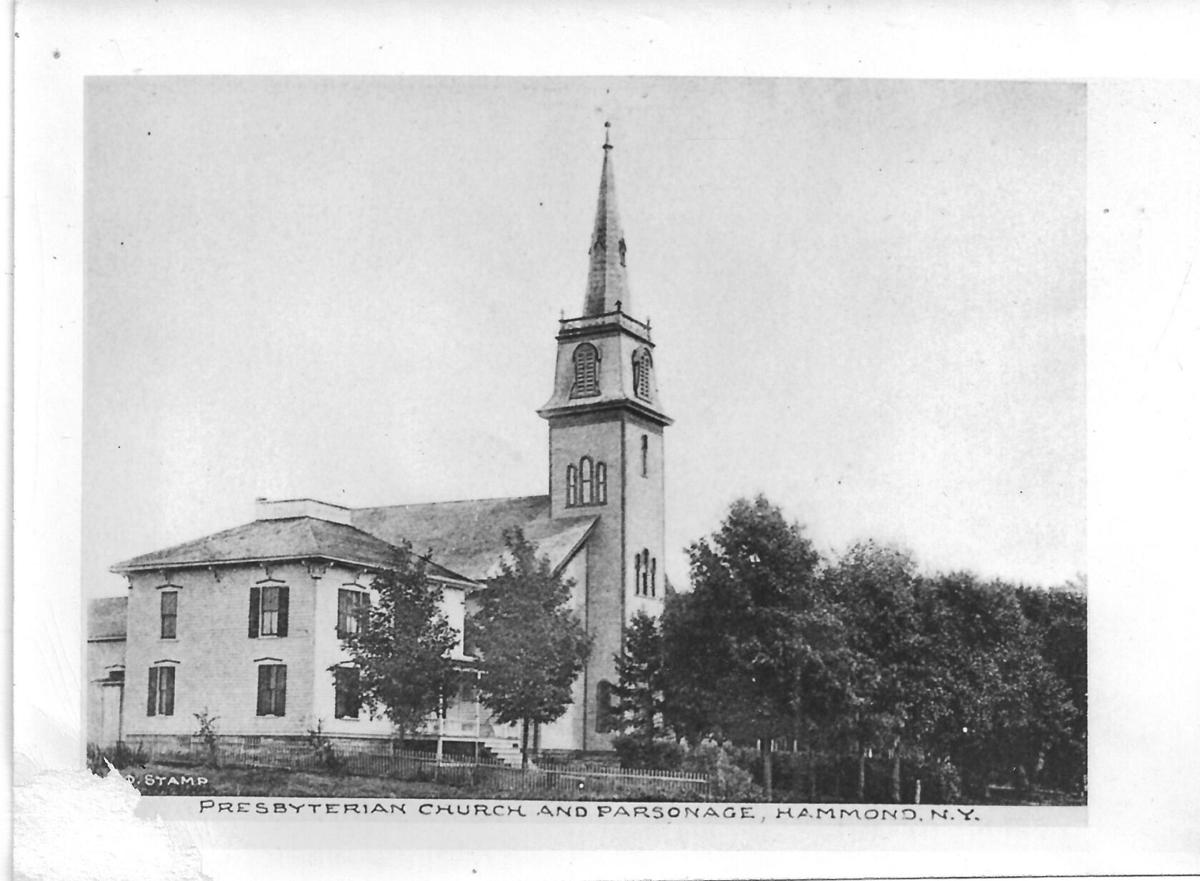 This photograph, provided by Hammond Historian Donna Demick, depicts the Hammond Presbyterian Church prior to the fire on Nov. 2, 1915, that destroyed the building. Submitted photo

This photograph, provided by Hammond Historian Donna Demick, shows the inside of the Hammond Presbyterian Church. Submitted photo

This photograph, provided by Hammond Historian Donna Demick, depicts the Hammond Presbyterian Church prior to the fire on Nov. 2, 1915, that destroyed the building. Submitted photo

HAMMOND — The Hammond Presbyterian Church will be celebrating its bicentennial this weekend.

On Saturday, there will be a program held at the church at 7 p.m. that will share the memories the bicentennial committee have received followed by community singing.

On Sunday, there will be a special church service at 10:30 a.m. followed by a picnic.

The following is a shortened history of the church provided by the bicentennial committee:

In 1818, Scottish families arrived in Montreal where they were met by a land agent of David Parish. They settled in the Chippewa Bay Road area, also known as Port Madras. They were a God-fearing lot and worshiped whenever itinerant preachers were available.

They attended a Methodist meeting and were upset that a woman had been allowed to speak during the meeting. On the way home they remarked that it would be nice to have local meetings and not be dependent on the itinerant preachers.

The order of services consisted of a morning service, a short intermission, Sunday school, and an afternoon service.

Peter Allen was the Sunday school superintendent for 30 years. The classes were held in several sites and were well attended. Catechisms were used in these classes. The youth studied primary and intermediate lessons. In senior and adult bible studies, a portion of scriptures was chosen and discussed. All this was accomplished with limited resources.

In 1823, James Rodger was licensed as a Presbyterian minister. He remained at HPC for four years. He then was in Morristown before ministering in Oswegatchie for 19 years.

In 1831, J. M. McGregor, who was born in Scotland, became minister. He served for 20 years. He also farmed the piece of land now owned by Delosh’s. He was described as a stern, sober-looking gentleman who didn’t appear to enjoy the best of health.

In 1833, as the congregation grew, it was decided to build a meeting house. One acre of land was purchased from Arnold Smith, located across from the burying ground. Timber and stone were brought in over the winter. William Smith built the church. Money was raised by pledges, selling pews at $40 per pew. The church was completed during the winter of 1837-38. Congregants were also given credit for providing materials, labor and goods. Examples of these include: John Hill quarried the stone for 87 ½ cents per day; carpenters received $1.25 per day. Robert Sheill received credit for 12 bushels of potatoes at 25 cents per bushel and a hog valued at $2.50. Those who contributed hay got $5.00 per ton. Flour was credited 3 cents per pound, oats 23 cents per bushel, and sand at 9 cents per load.

In 1852 James Gardner was called. He was a graduate of Dublin University. He had been teaching at St. Lawrence Academy in Potsdam.

In 1869, Rev. James Rodger, grandson of the first minister is supply minister for two years.

In 1870, the stone church was unfit to be repaired or too small for the current needs. A total of $7,000 was required to build a new frame church. If $500 could be raised, construction would proceed. A total of $5,525 was raised by subscription in one month. A committee was elected to guide the building consisting of Robert Rodger, Rutherford Rodger and James More.

On Jan. 7, 1872, the new church was dedicated. The interior was finished in black ash and walnut. Rev. Rodger donated two valuable chandeliers. It provided seating for 400 congregants. Rev. Harry Swift served as a supply minister for one year. Rev. Andrew Milne followed. He was well liked, but in poor health. He served for one year.

In 1875, Rev. Dr. Daniel Ferguson was called. He was a new graduate of Union Theological Seminary in New York City and grandson of Rev. James Rodger. He would go on the serve the church for 48 years. The manse was built.

On Nov. 2 1915, fire was discovered in the manse. The Fergusons escaped with what they were wearing. Mrs. Ferguson received burns to her face, neck and arms after opening a closet where the fire began and a sprained ankle from a fall on the way to summon help. The fire department was able to save the Fred Meyers house next to the manse and started to fight the fire which had spread to the church. Unfortunately they ran out of water and the church was destroyed.

In 1918, the new sandstone church was dedicated.

In 1923, Dr. Ferguson resigned. Rev. W. Halbert Campbell became the new pastor. He is credited with starting the first Boy Scout troop in Hammond. He was also heavily involved in youth projects and sports. During his time every effort was made by the elders to get folks to church. Non-members and delinquent members were visited often.

In 1935, Rev. Garner O’Dell was called to replace Campbell. The Oak Point Conference Center was procured.

Rev. William Bell was called to service in 1939.

In 1943, Campbell returned to lead the church and in 1944, 88 people were added to the congregation due to the closing of the local Methodist church.

An annex was added in 1949 to the church to make room for administrative offices and more Christian education rooms.

In 1970, the electric carillon was given as a memorial gift by Mr. and Mrs. Leonard Ferguson and in 1971 the church celebrated its sesquicentennial with a dinner and special service.

A used school bus was purchased in 1977 and it transported children from school to the church for released time at the church. Thanks to Malcolm McGregor, the bus was used for Christmas caroling outside the village and taking folks to retreats.

In 1980, Old Home Sunday services were begun to include instrumental and vocal music. They provided an opportunity for former neighbors and friends to come together.

In 1982, Rev. Everett Prudhomme was called to service. During this time maintenance projects to maintain the church continued. A new heating system was installed and as in times past, was quickly paid for by congregational donations.

In 1993, Rev Evelyn Merideth was called to be pastor and then in 1995, Rev Amy Keiter Jelensberger was called to serve as pastor. She and Pieter Visscher worked with church youth. They also began an after school program for local youth with time for homework, games, and dinner, complete with linen napkins and china.

Rev. Joyce Serchak was called to serve in 1999. The church was made handicapped accessible with the installation of an elevator and a friendship garden along the level path.

In 2004, Rev. Edward Carlson became the new pastor followed by Rev. Catherine Stevenson was called to serve the church in 2007. She led the church to have a larger presence in the community with events like the Fall Festival. A labyrinth was constructed in the back of the church yard and a screen house built behind the manse. She tragically died in 2013 and Rev Norma Murphy became interim pastor to assist the church through this sad time.

In 2015, Rev. Evon Lloyd was called to be the next installed pastor. A pavilion was built in honor of Rev. Stephenson. The labyrinth was rebuilt at this time.

The church congregation began its journey searching for a new leader with Rev. Betsy Westman acting as moderator of the session with Rev Martha Montovani and Rev. Kerri Weldon leading services in 2018. The church maintained its community presence through this time including the pandemic.

In 2021, Rev. Dr. Shea Zelwigger is called to lead the church into its third century.

Throughout the history of Hammond Presbyterian church, mission and community have been important calling of the church. Church dinners have brought the community together, especially during the pandemic, as well as raising funds for maintenance of the church and manse. Mission projects like the Marion shallow wells, school and health kits, and support of missionaries.