An advertisement for the Ford Model T from 1908 is shown. The last Ford Model T rolled off the assembly line on May 26, 1927. Wikipedia 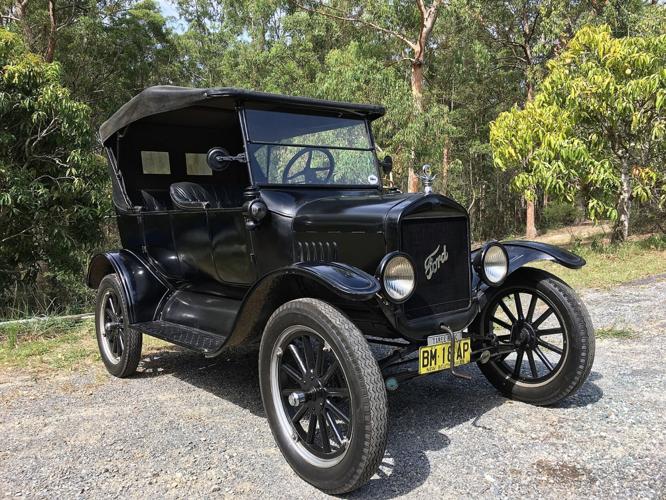 An advertisement for the Ford Model T from 1908 is shown. The last Ford Model T rolled off the assembly line on May 26, 1927. Wikipedia

May 26, 2012: State campgrounds in the region are almost filled to capacity for the long weekend. Every one of the 20 Thousand Islands state parks with campsites will have “no occupancy” signs up by today at the latest. Campsites have been filling up early this year, especially in the Thousand Islands region, thanks in part to the mild winter and high gas prices. When the economy is struggling and gas prices are up, people tend to vacation closer to home and plan more “affordable getaways” such as camping at state parks.

May 26, 1997: The commanding general of Fort Drum and the 10th Mountain Division is returning to the Pentagon for a “critical” staff position after he relinquishes command in June. The Defense Department announced Tuesday that Maj. Gen. Thomas N. Burnette Jr. was nominated for appointment as a three-star lieutenant general and a new assignment as the Army’s deputy chief of staff for operations and plans.

May 26, 1972: An army helicopter from Camp Drum visited Watertown for the second time in two days today to leave a patient at the House of the Good Samaritan. The ’copter landed on the former Keep Home property along Pratt Street. Patients are being evacuated by helicopters from Camp Drum to Watertown because of the fact that the post hospital has been deprived of the use of hospital equipment destroyed in a fire a few months ago.

May 26, 1947: Cold weather and excessive rain have help up the blossoming of the famous Staplin lilacs in Mannsville, but owner George Staplin, 85, thinks they will be in full bloom in the next few days. Staplin park is a mecca for flower lovers each year about this time. The lilacs include numerous varieties and range in color from white to violet and deep purple.

May 26, 1922: All records for automobile crossings in a single day were broken yesterday when 219 cars made the trip back and forth between Ogdensburg and Prescott, the occasion being Victoria day. Tobacconists did a land-office business during the day, many of the visitors improving the opportunity to stock up with American cigarets before the higher tax foes into effect across the border.

May 26, 1897: Probably the largest collection of sidewalk notices ever served in a bunch were served yesterday and today. There were 58 of them, scattered all over the town. Sidewalk Inspector Baker is doing a wholesome business in his line.

May 26, 1872: President Grant intends going to Long Branch after the adjournment of Congress. Afterward he and his wife are to visit the great lakes, returning by way of the St. Lawrence river.

1783: A Great Jubilee Day held at North Stratford, Conn., celebrates the end of fighting in the American Revolution.

1805: Napoléon Bonaparte assumes the title of King of Italy and is crowned with the Iron Crown of Lombardy in Milan Cathedral, the gothic cathedral in Milan.

1822: At least 113 people die in the Grue Church fire, the biggest fire disaster in Norway’s history.

1857: Dred Scott is emancipated by the Blow family, his original owners.

1864: Montana is organized as a United States territory.

1868: The Impeachment of Andrew Johnson ends with his acquittal by one vote.

1869: Boston University is chartered by the Commonwealth of Massachusetts.

1923: The first 24 Hours of Le Mans is held and has since been run annually in June.

1937: Walter Reuther and members of the United Auto Workers (UAW) clash with Ford Motor Company security guards at the River Rouge Complex complex in Dearborn, Michigan, during the Battle of the Overpass.

1938: In the United States, the House Un-American Activities Committee begins its first session.

1948: The U.S. Congress passes Public Law 80-557, which permanently establishes the Civil Air Patrol as an auxiliary of the United States Air Force.

1969: 10 returns to Earth after a successful eight-day test of all the components needed for the forthcoming first crewed moon landing.

1972: The United States and the Soviet Union sign the Anti-Ballistic Missile Treaty.

1981: Italian Prime Minister Arnaldo Forlani and his coalition cabinet resign following a scandal over membership of the pseudo-masonic lodge P2 (Propaganda Due).

1981: An EA-6B Prowler crashes on the flight deck of the aircraft carrier USS Nimitz, killing 14 crewmen and injuring 45 others.

1983: The 7.8 Mw Sea of Japan earthquake shakes northern Honshu with a maximum Mercalli intensity of VIII (Severe). A destructive tsunami is generated that leaves about 100 people dead.

1991: Zviad Gamsakhurdia becomes the first elected President of the Republic of Georgia in the post-Soviet era.

1991: Lauda Air Flight 004 breaks apart in mid-air and crashes in the Phu Toei National Park in the Suphan Buri Province of Thailand, killing all 223 people on board.

1998: The Supreme Court of the United States rules in New Jersey v. New York that Ellis Island, the historic gateway for millions of immigrants, is mainly in the state of New Jersey, not New York.

1998: The first “National Sorry Day” is held in Australia. Reconciliation events are held nationally, and attended by over a million people.

2002: The tugboat Robert Y. Love collides with a support pier of Interstate 40 on the Arkansas River near Webbers Falls, Oklahoma, resulting in 14 deaths and 11 others injured.

2008: Severe flooding begins in eastern and southern China that will ultimately cause 148 deaths and force the evacuation of 1.3 million.

2020: Protests triggered by the murder of George Floyd erupt in Minneapolis–Saint Paul, before becoming widespread across the United States and around the world.

2021: Ten people are killed in a shooting at a VTA rail yard in San Jose, California, United States.w