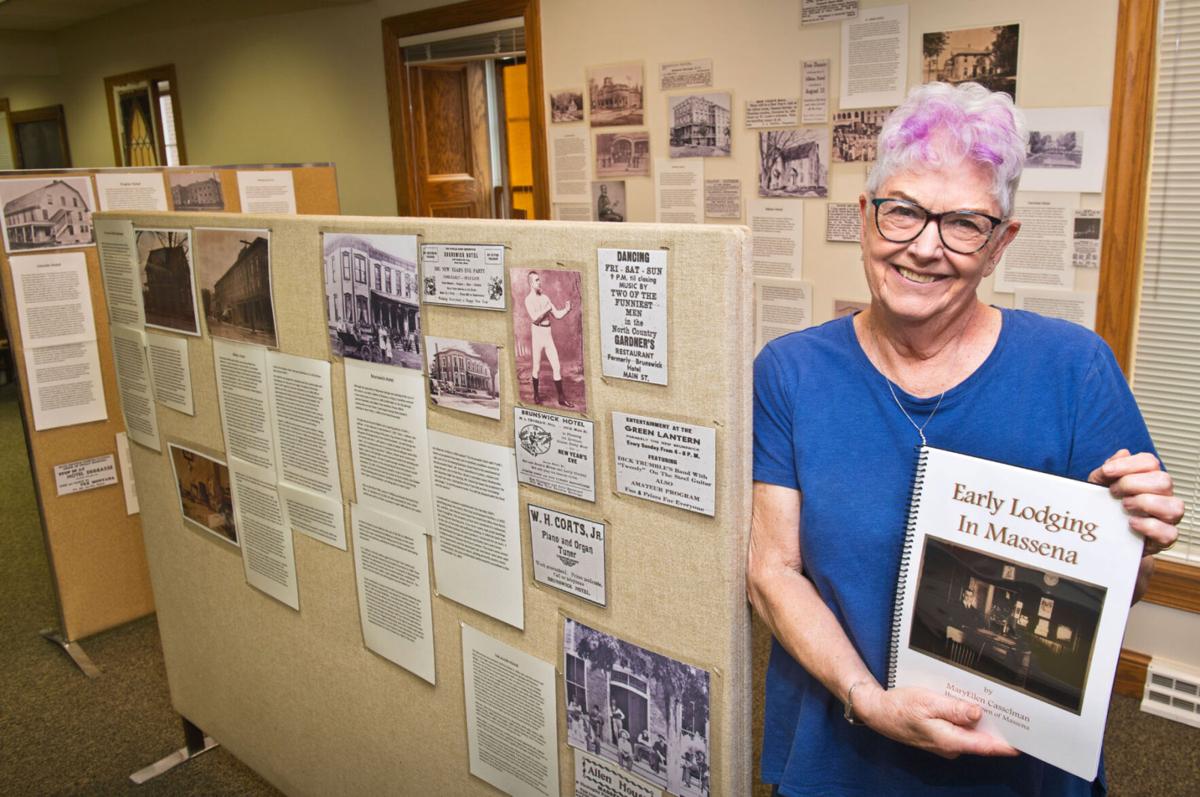 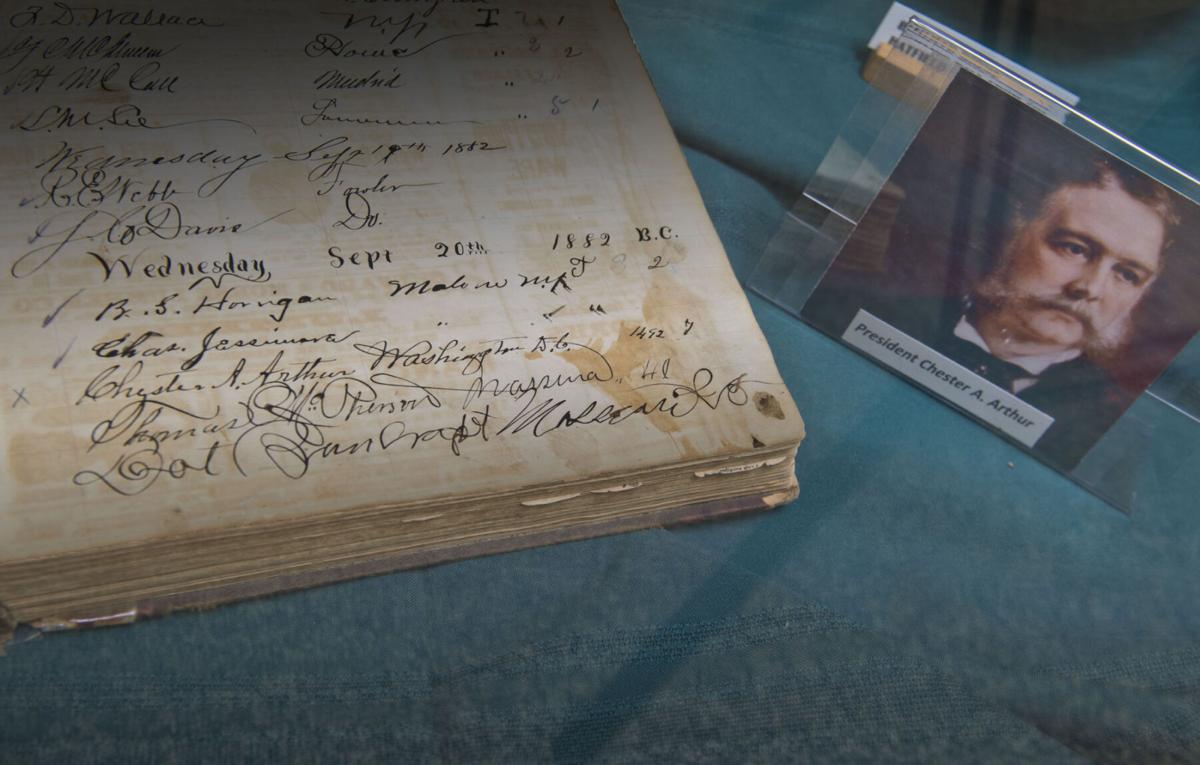 The signature of President Chester A. Arthur, third from the bottom, in the register of Massena’s White Hotel, displayed at the Celine G. Philibert Cultural Centre and Museum. Christopher Lenney/Watertown Daily Times 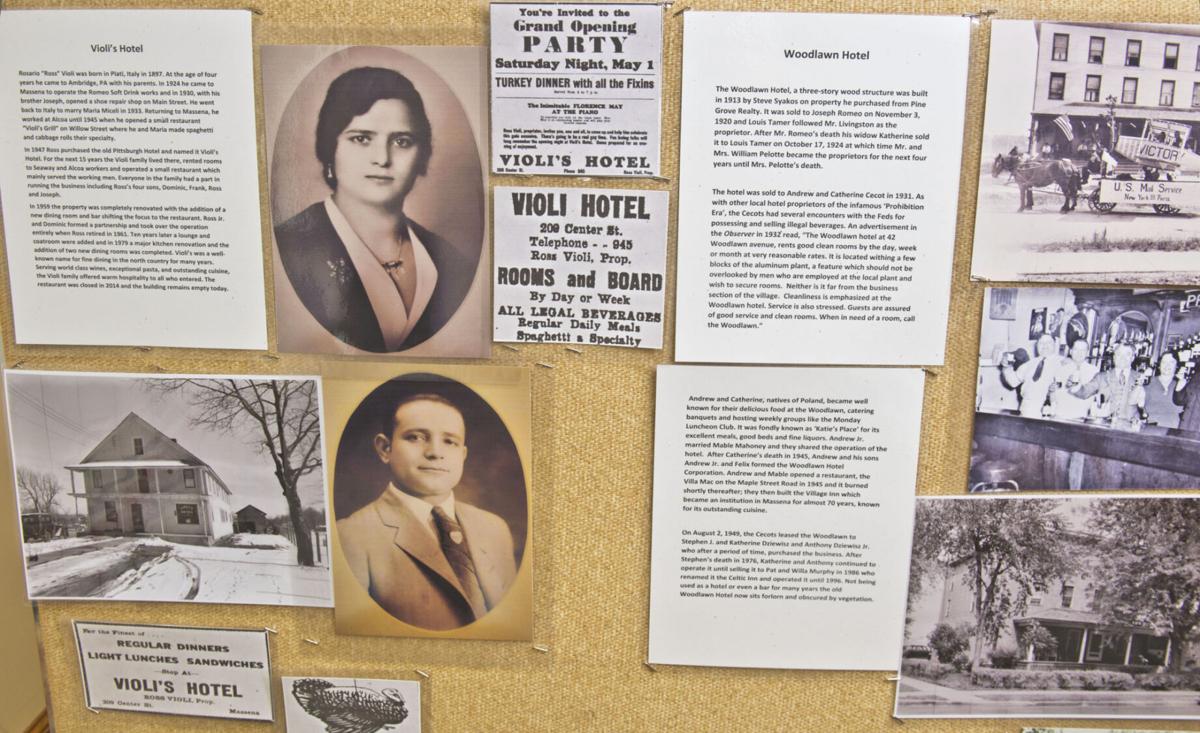 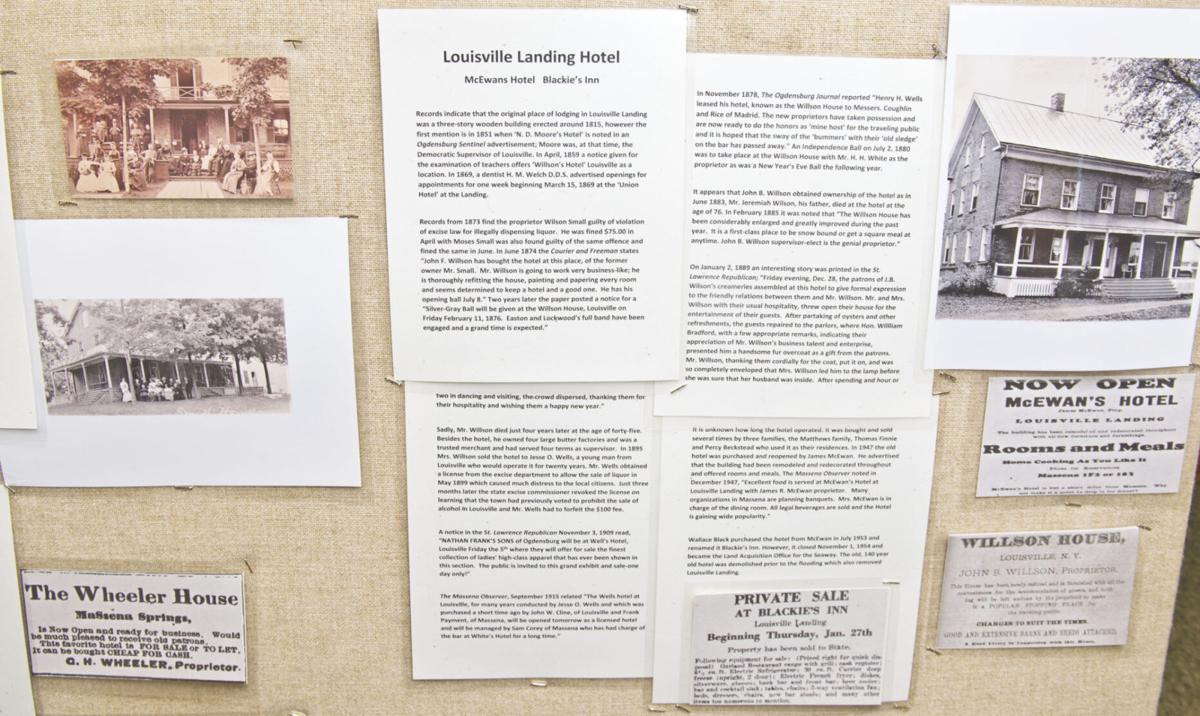 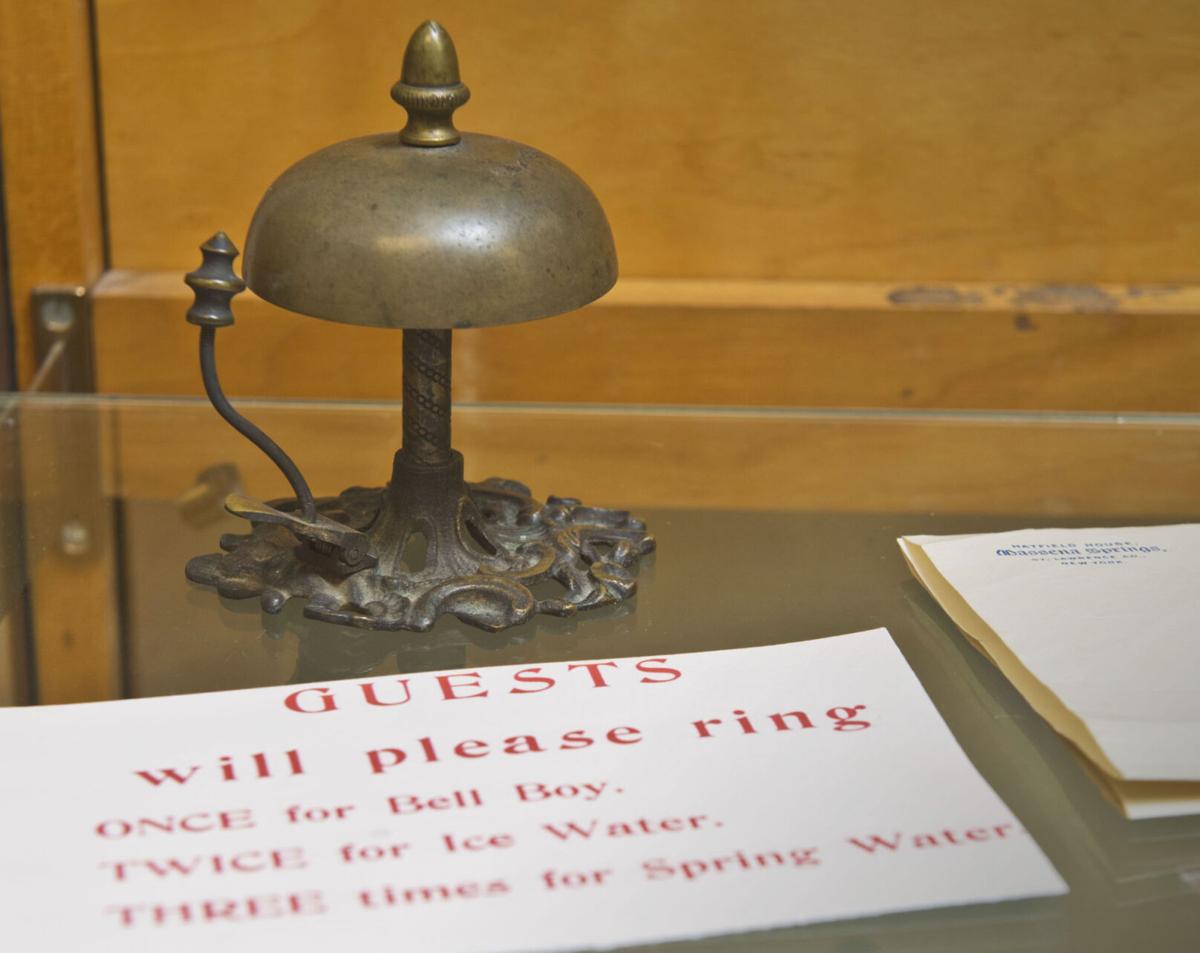 A front desk bell is among memorabilia on display at the Celine G. Philibert Cultural Centre and Museum to accompany a new book by Massena Town Historian MaryEllen Casselman. Christopher Lenney/Watertown Daily Times 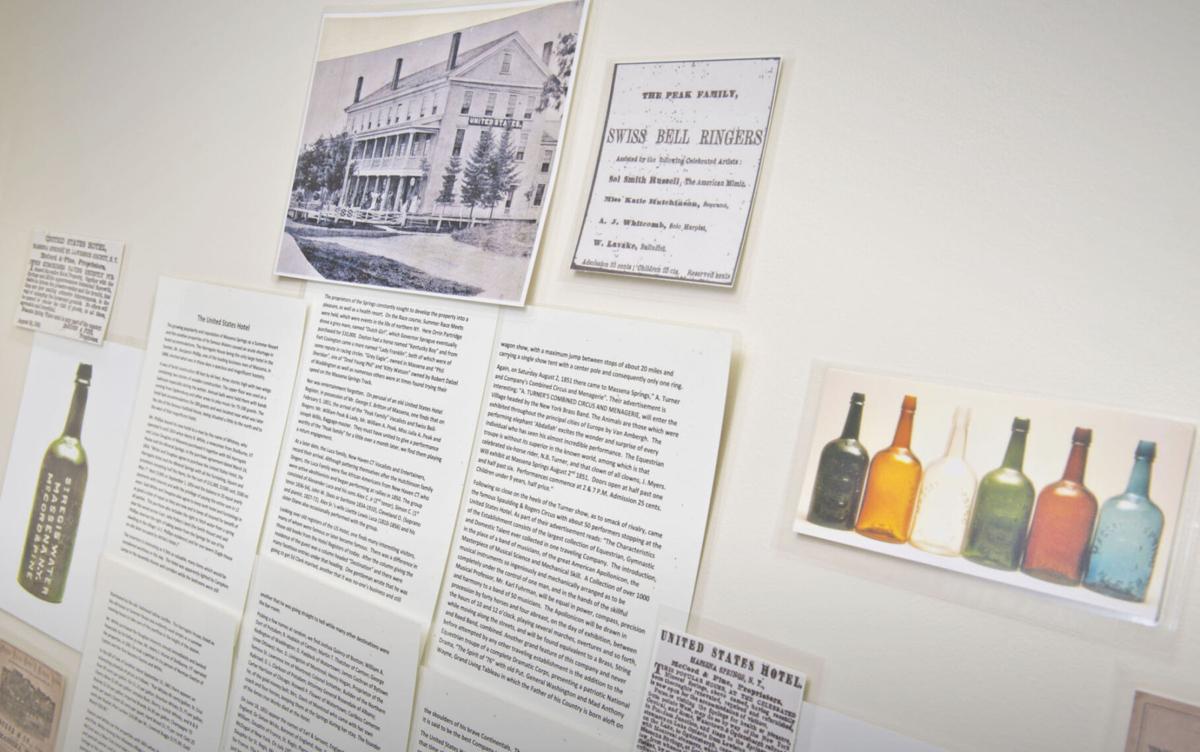 The signature of President Chester A. Arthur, third from the bottom, in the register of Massena’s White Hotel, displayed at the Celine G. Philibert Cultural Centre and Museum. Christopher Lenney/Watertown Daily Times

A front desk bell is among memorabilia on display at the Celine G. Philibert Cultural Centre and Museum to accompany a new book by Massena Town Historian MaryEllen Casselman. Christopher Lenney/Watertown Daily Times

MASSENA — The latest exhibit at the Celine G. Philibert Cultural Centre and Museum is a trip back in time to some of Massena’s historical lodging.

“Early Lodging in Massena” is the name of a new exhibit, as well as a book written by Town Historian MaryEllen Casselman.

“I just though it was interesting. I did a lot of digging,” she said.

One of her inspirations to begin digging into the history of lodging was a picture of an old St. Regis water bottle she received from a historian. The individual wanted to know about the names on the bottle, McCord and Pine.

However, she was unable to find much information on Mr. McCord. But, as she began looking into the names on the bottle, it became more clear that what she was finding was worthy of a book and exhibit on lodging in the old days.

The United States Hotel was on the corner of Main and Hatfield streets. Ms. Casselman said it burned in 1872 and the Hatfield House took its place.

“The Hatfield House was the most elite of them all. It was for the rich and famous,” she said.

The Harrowgate House sat on the spot now occupied by Romeo’s Liquors.

“That was there for a very long time,” she said.

Across the street from the Harrowgate House, visitors would find Rose Cottage.

When Alcoa and the power canal became part of the Massena landscape, other hotels made appearances.

The DeGrasse Hotel was at one time a hospital that treated patients with the Spanish flu. The Lincoln Hotel was built by Alcoa for “colored people” who worked at the plant.

The Smith House was built in 1822 and stood at the current site of the Springs Inn. The Allen House could be found on what is now the Massena Fire Station parking lot.

Another hotel was located at the current car wash site on South Main Street. It’s proprietor, George Bush, was a sparring friend of boxer John L. Sullivan, who frequently stayed in Massena.

The daughter of John Bentley of the Bentley House married a Cook. Later in the years, Nancy Cook became friends with First Lady Eleanor Roosevelt.

“That’s the reason she made a lot of visits here,” Ms. Casselman said.

One hotel had a barbershop with Professor Norris Lee cutting hair.

“He was not known as a good barber at all,” she said.

But he did have one famous trait. He was known as “the fiddling barber” for his violin music.

The exhibit provides information on all of these lodging facilities, as well as photos of many of them.

“We had a lot of pictures in our files,” she said.

There are lanterns from the Allen House. In some cases, there are ledgers signed by the individuals who stayed there, including Chester A. Arthur, the 21st president of the United States, during a visit to the White Hotel.

A postcard with a price list for Massena Spring Water notes that it’s delivered on railroad. The cost — $3.75 for one case, $16.87 for five cases.

Because of the current COVID-19 restrictions, the Celine G. Philibert Cultural Centre and Museum is open Monday through Friday by appointment only. Call 315-769-8571 and ask for the historian.

And while you’re there, pick up a copy of Ms. Casselman’s latest book, which digs deep into Massena’s lodging history, for $25.