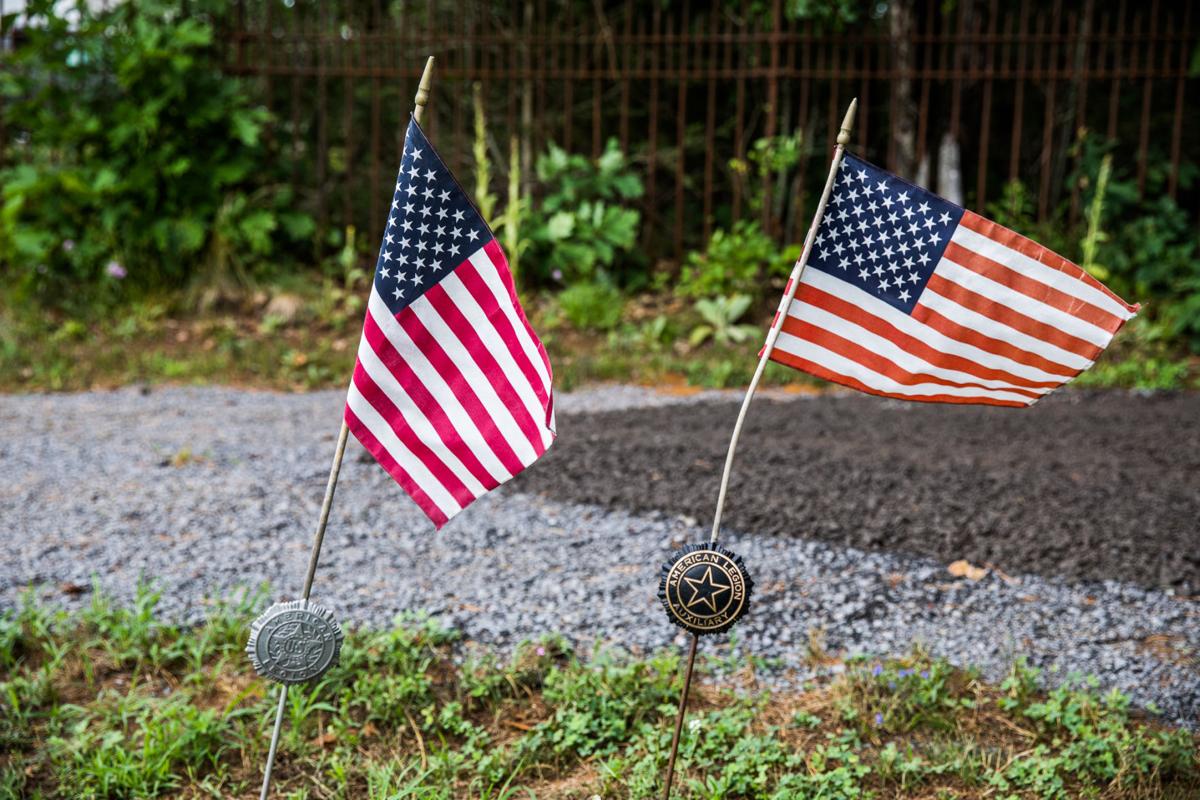 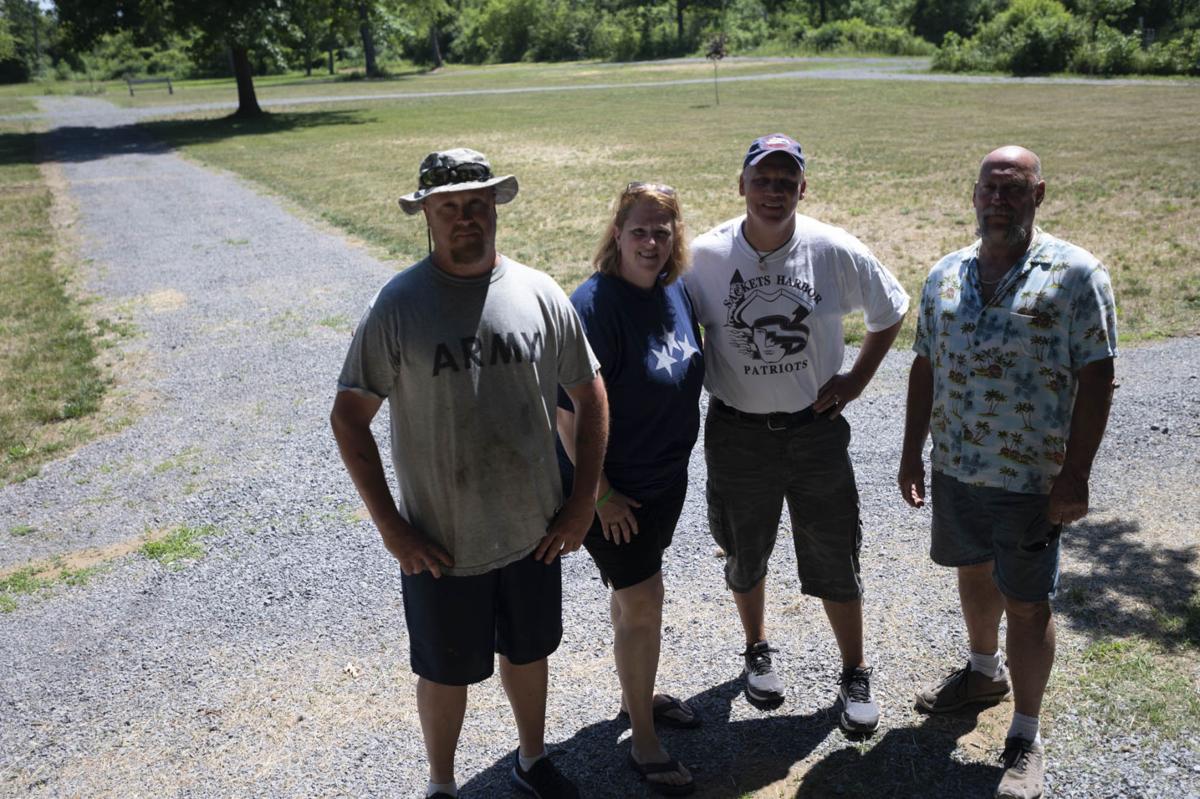 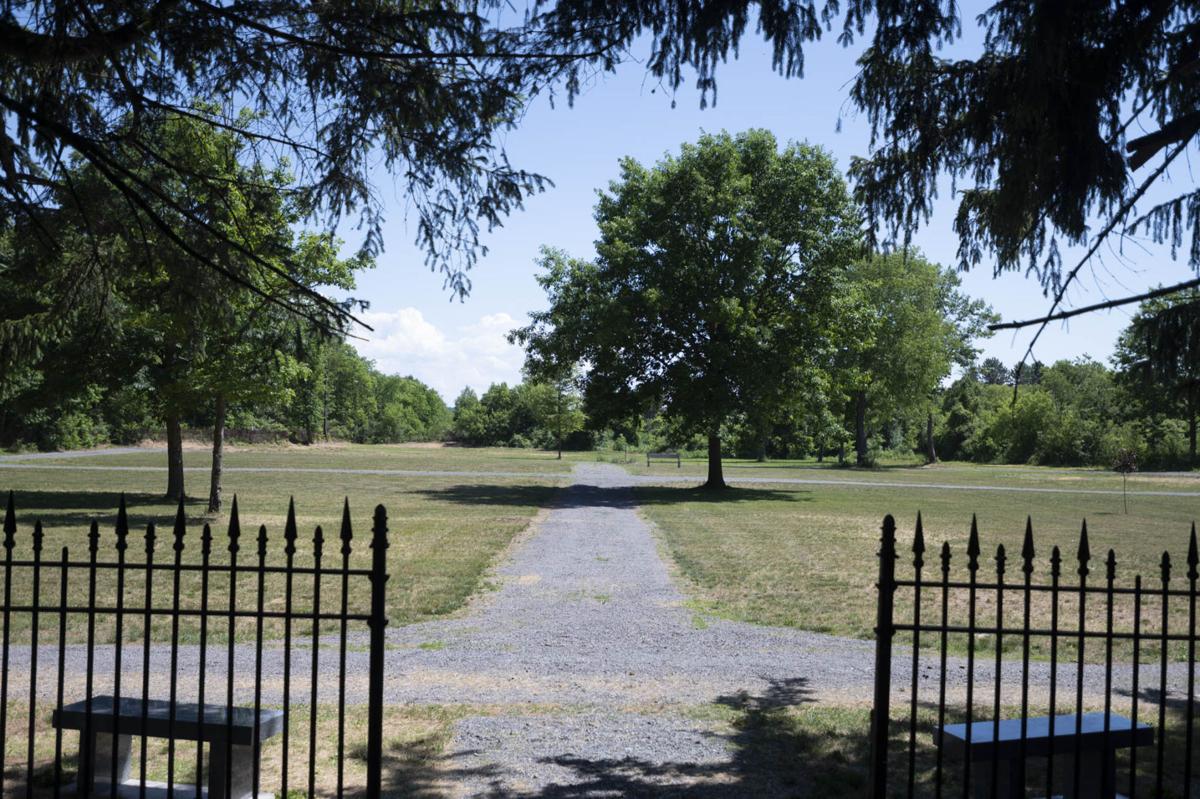 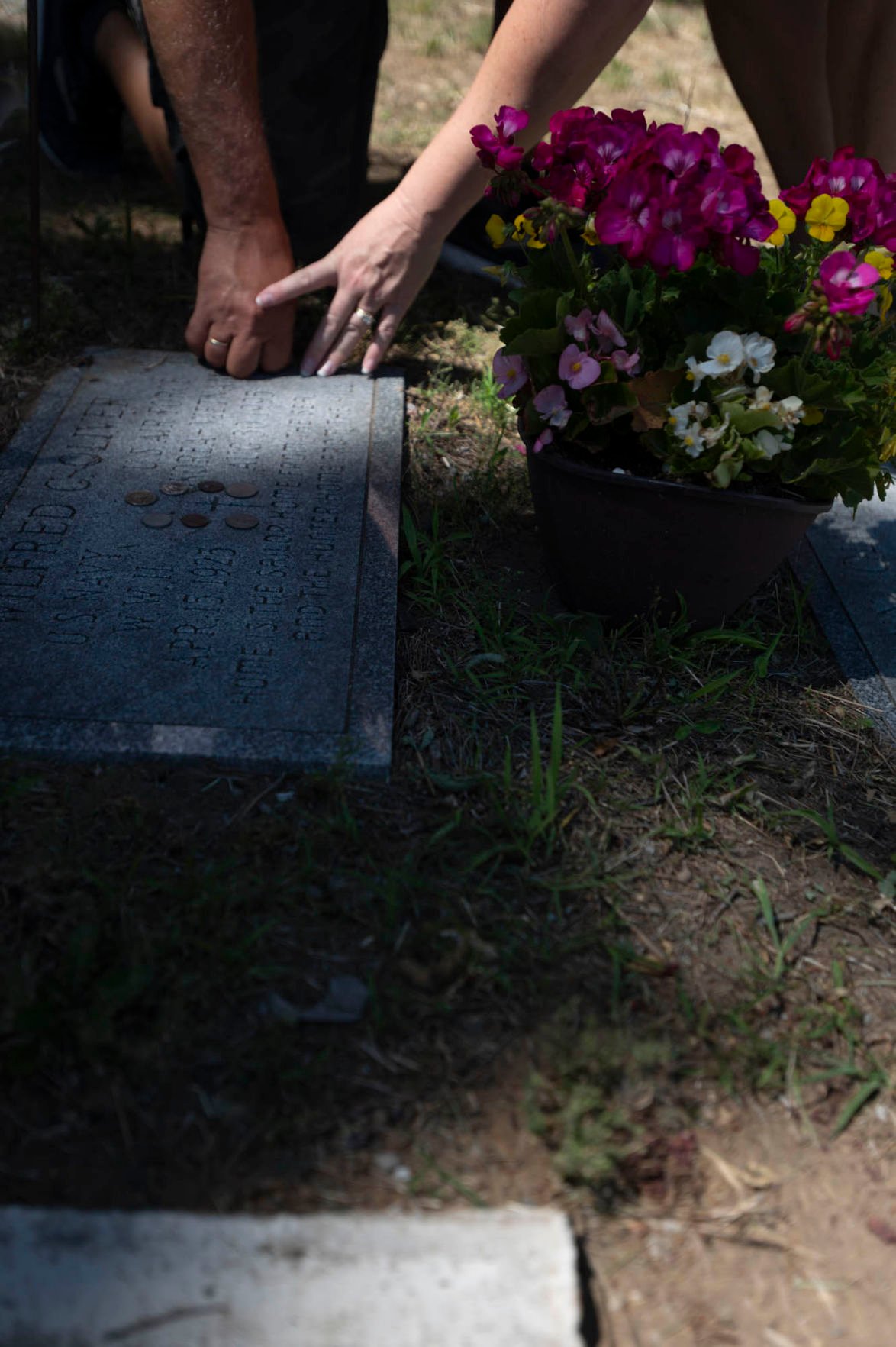 The cemetery’s expansion project was partially inspired by Kevin Oliver’s mother, MaryAnn. She wanted to be buried with her husband, Wilfred, a veteran, but since she herself was not a veteran and the old part of cemetery was full, she was unable to be buried with him. Mrs. Oliver now rests with her husband in the new part of the cemetery. Lauren Miller/Watertown Daily Times 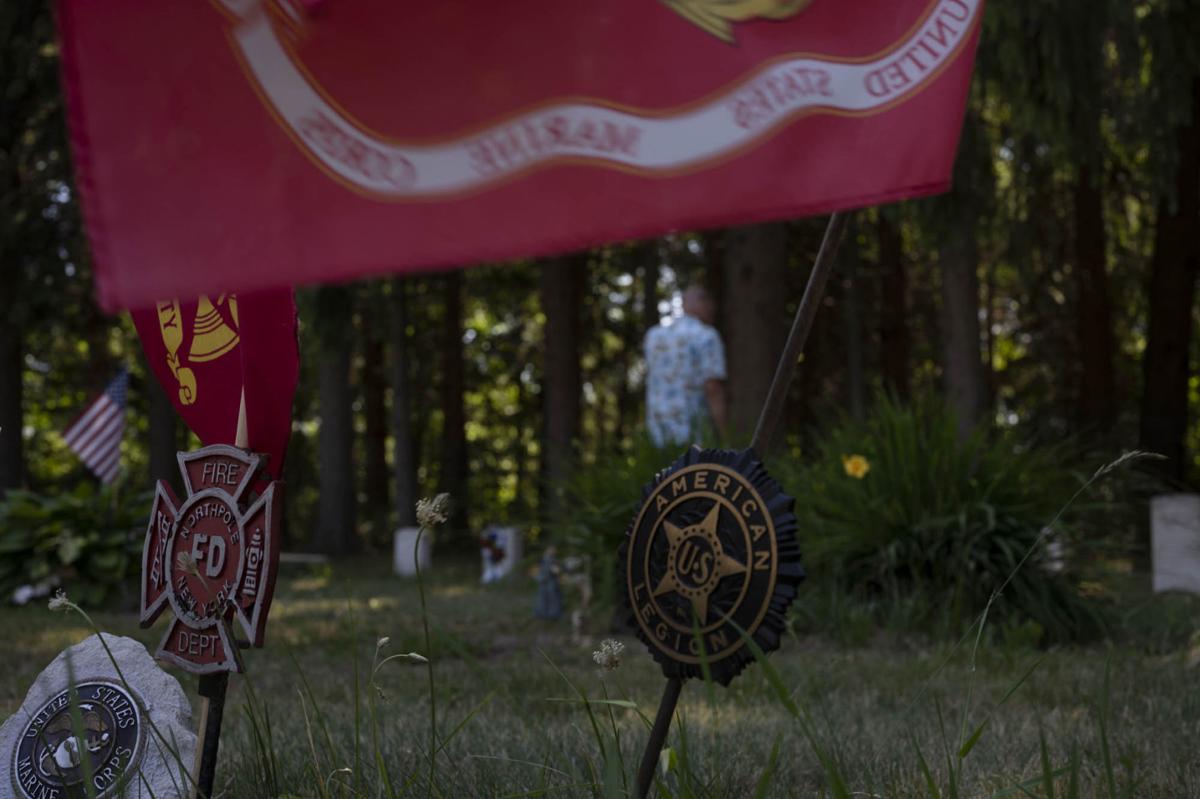 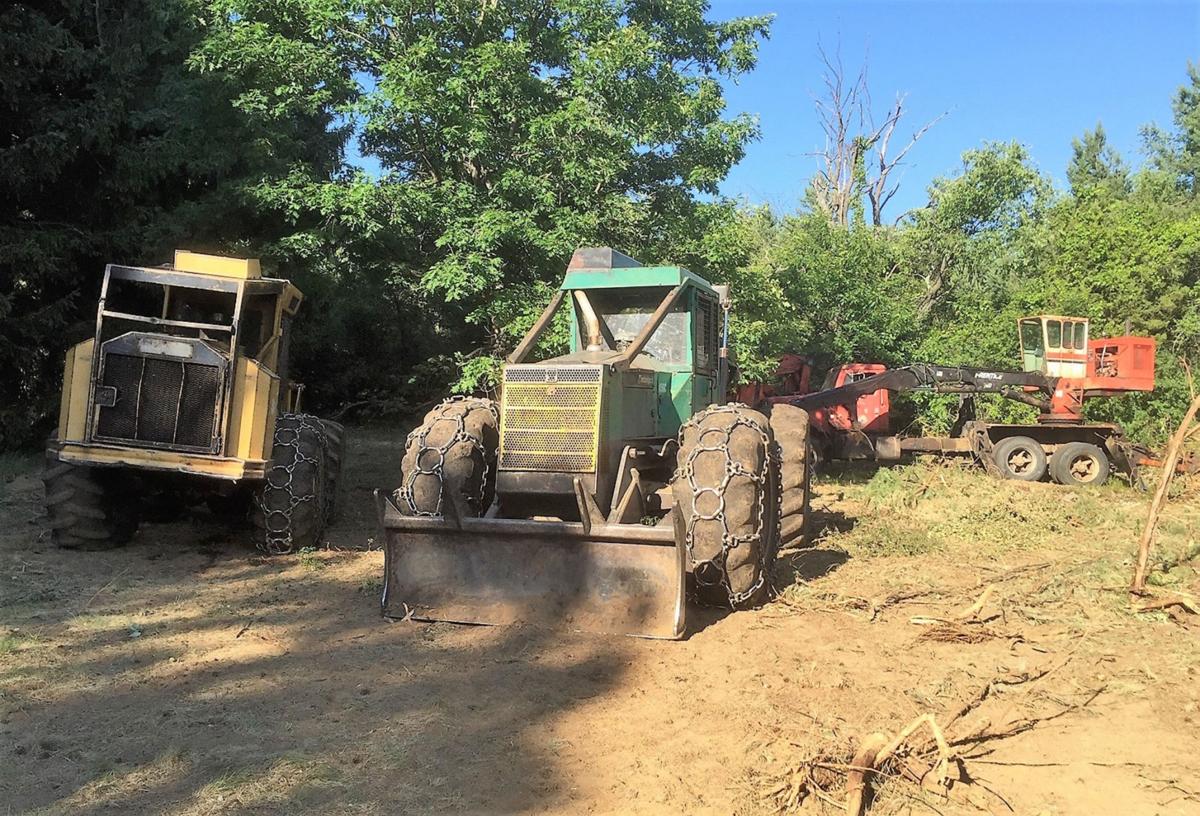 The four-year project to expand the Military Cemetery in Sackets Harbor required some heavy equipment. Photo courtesy of Kevin Oliver 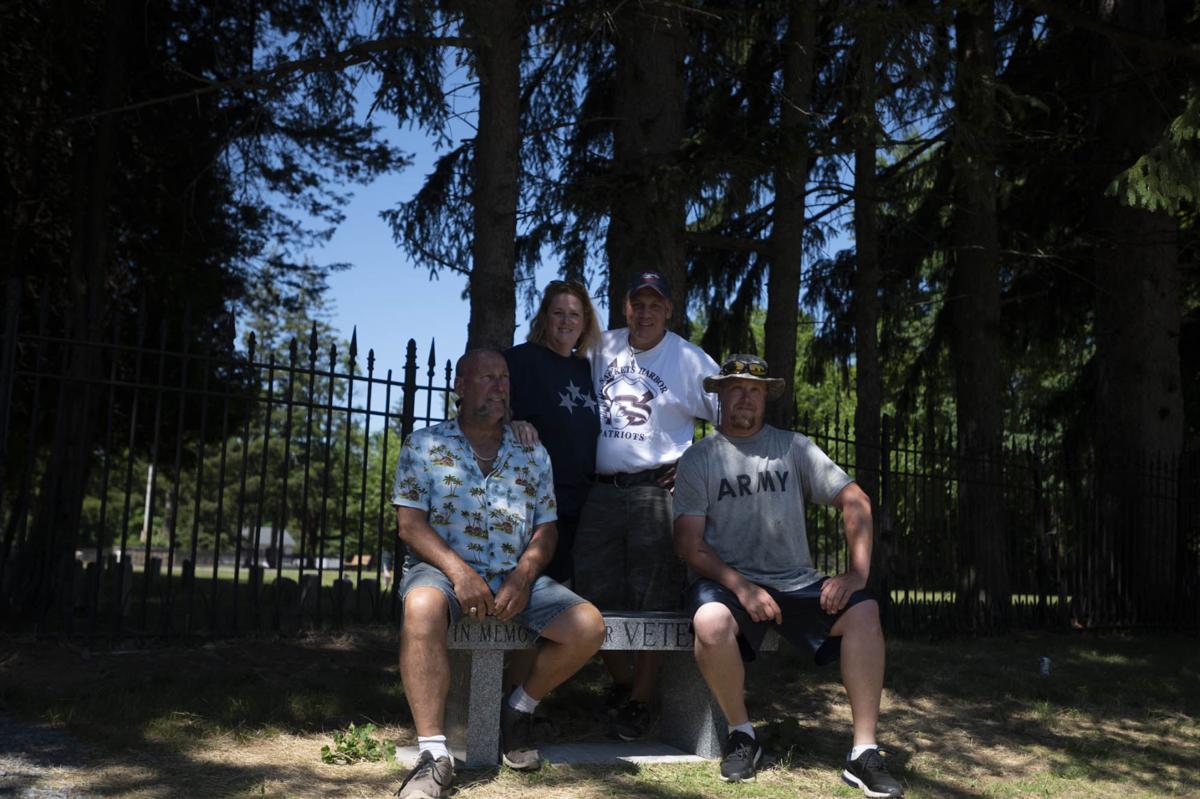 A. Cozzi Monuments, of Watertown, donated a bench to Military Cemetery with the names of people instrumental in completing the expansion project. Those names include, from left, Dan Hoagland, of Sackets Harbor, Dana and Kevin Oliver, of Melbourne Beach, Fla., and Thomas Spencer, of Sackets Harbor. They and others spent four years clearing out forest and brush and putting in roads to make more room for veterans and spouses to be buried at the cemetery. Lauren Miller/Watertown Daily Times

DonnaLee Jarvis donated this bench at the entrance of the new section of Military Cemetery in Sackets Harbor in honor of her parents. Courtesy of Dana Oliver

The cemetery’s expansion project was partially inspired by Kevin Oliver’s mother, MaryAnn. She wanted to be buried with her husband, Wilfred, a veteran, but since she herself was not a veteran and the old part of cemetery was full, she was unable to be buried with him. Mrs. Oliver now rests with her husband in the new part of the cemetery. Lauren Miller/Watertown Daily Times

A “military cemetery” is usually a national parcel managed by the federal government. The Na…

SACKETS HARBOR — When the children and grandchildren of Norman D. and Violet M. Helbock get together in summers, a visit to Lakeside Cemetery is in order to spruce up the cemetery a bit and to visit the graves of the pair.

The visits continue a family tradition.

“We have a little ceremony around my parents’ graves,” Mrs. Jarvis said. “We all sing, ‘You Are My Sunshine,’ my dad’s favorite song, and my mother’s was, ‘I Can’t Smile Without You.’”

They rest at Lakeside, maintained by the town of Hounsfield, but Norman and Violet had hoped to be buried across the road (Dodge Avenue), at Military Cemetery, maintained by the village of Sackets Harbor. Both were Air Force veterans, heavily active in the community and life members of American Legion Post 1757, 209 Ambrose St.

“All I know there was not enough, per se, space,” Mrs. Jarvis said. “So my dad just decided, ‘Let’s just let it go and one day we’ll see what happens.’”

Members of the American Legion Riders at Post 1757 and others saw what was happening at Military Cemetery and went to work.

“At one of our meetings, we brought up a motion to clean up the back half of the Military Cemetery to expand it a little bit,” said Legion Rider member Thomas E. Spencer. “It’s always been there, but it just got way, way overgrown.”

Former Sackets Harbor resident Kevin Oliver, who now lives in Florida and works as a pilot for Southwest Airlines, spearheaded the expansion project with Mr. Spencer. The expansion began in 2016.

They estimate nearly 2,000 burial sites have been added to the cemetery. The size of the cemetery has more than doubled with the clearing.

Mr. Spencer said organizing a work crew for the cemetery was often a “last-minute thing.”

“I’d be up from Florida, and I’d call Tommy and he’d say, ‘Let’s give Dan Hoagland a call,’ and all three of us would be down here working all day long. Normally, that’s how it went.”

“We had 20 Riders when we first started, had big groups of Riders helping,” Mr. Spencer said. “But some got deployed, retired and a bunch of them moved away. Now, we’re down to like five people.”

But businesses, the community, the local VFW chapter and soldiers from Fort Drum have also helped to make the project a success.

“When we started this project, the trees were so thick and heavy in here that we had a logging company come in and log it all off for us,” Mr. Spencer said.

He and Mr. Oliver were amazed at the work the logging company, Matt-Farr Logging, Port Leyden, accomplished, and all for free.

“They spent a week to a week and a half cutting down trees,” Mr. Spencer said.

“Bob Benwell of Hounsfield donated all his heavy equipment — dozers, excavators , skid steers and seeding equipment — and gave us a 80 percent discount on his operating time,” Mr. Oliver said.

The Legion Riders used some creative ways to raise funds for the project. In 2018, Mr. Oliver took monetary pledges for a Florida bicycle ride from Fort Myers Beach to Melbourne Beach, where he lives. The ride raised about $6,700 for the expansion project.

The expansion allows for the bodies of non-military spouses to be buried with their deceased spouses who served in the military without being cremated.

“The original Military Cemetery was so small and was almost full so they didn’t want to make extra room for a spouse casket, not even stacked,” Mr. Oliver said. “But now, with the new section that the Riders built tripling the original size of the cemetery, they changed the rules to allow the veteran and the spouse to be buried together in that section.”

The expansion allowed for the bodies of Mr. Oliver’s parents, Wilfred C. Oliver, who died in 1995, and MaryAnn, who died in 2017, to be buried at Military Cemetery. Wilfred was a Navy veteran of World War II and served with the Air Force in the Korean and Vietnam wars, retiring in 1969. Following MaryAnn’s death, the MaryAnn Community Service Scholarship, sponsored by the Riders, was created. It honors a graduating senior in Jefferson County who emphasizes “Service, Not Self.”

The graves of Wilfred and MaryAnn Oliver are two of three in the new section. The other is of Vietnam veteran and Purple Heart recipient Allen E. “Punky” Fox Jr., who died in November of 2018.

At the entrance of the new section is a pair of benches, appearing like steadfast sentinels. Mrs. Jarvis donated one of the benches in memory of her parents, buried at Lakeside. It has the name of her parents on the front of it. One side has the Air Force logo and the other side notes the couple were life members of American Legion Post 1757.

“I’m so super pleased, and I know my parents would be,” Mrs. Jarvis said.

The other bench has the American Legion Riders logo on it and names of eight individuals who were key for the expansion project: Greg Webster, Bob Bendwell, Dan Hoagland, Thomas Gray, Dara Oliver, Jackie Spencer, Mr. Oliver and Mr. Spencer.

Both benches are the creations of A. Cozzi Monuments, Watertown.

A brief ceremony to officially mark the expansion had been scheduled for Saturday.

“Now, we’re pretty much done,” Mr. Oliver said. “The village is more than happy to keep it up and stuff and we have a few minor things we’ll work on and pick at here and there, but the bulk of the work is done and it’s ready to be used. The biggest thing is that it’s open to all veterans. It’s not just the people of Jefferson County and their spouses. That’s huge.”

In the May 30, 2017 Village Board of Trustees meeting, a motion was made to amend the rules of the cemetery to allow for the stacked burial of spouses in the same plot of persons interred there who served in the military and in the area of the cemetery cleared of brush. The motion passed 3-2 in a roll call vote. Mayor Vincent J. Battista was joined by council members Barbara A. Boulton and Molly C. Reilly in approving the motion.

However, a policy page of the Military Cemetery provided by the village still says, “the veteran’s spouse must be cremated.”

“I’m not sure what occurred,” village mayor F. Eric Constance said. “There was a change in 2017. I’m going to have a look at that at our next meeting in July — to find out if that should be adopted, why it wasn’t adopted and so forth. We have a committee that helps dig those things up for the village board, helps analyze things like that and they recommend to the village board what you need to do and it’s up to the village board to adopt it.”

The mayor was asked if he expected any issues with what was amended in May of 2017.

“I’m not sure because I wasn’t around the board at the time, so I don’t really know what their thought process was,” he said.

The Village Board of Trustees appointed Mr. Constance to the part-time mayor’s position last year for a one-year term when former mayor Molly Reilly, who was elected in 2017, resigned to take a position in Gov. Andrew M. Cuomo’s administration.

“It’s all new to me and just got brought to my attention,” Mr. Constance said of the written cemetery policy. “I’m going to try to have a little sounding board with them on our July 14 meeting.”

“It’s kind of upsetting to know we have worked on this project for over four years and the village hasn’t updated the information for the veterans,” Mr. Oliver said.

Mayor Constance said he’s very happy with the way how the community came together to expand the cemetery.

With the expanse, the mayor said the village will budget for the additional upkeep.

“We plan it in the budget every year. We have a good DPW crew and they do a good job. They take pride in it as well,” he said.