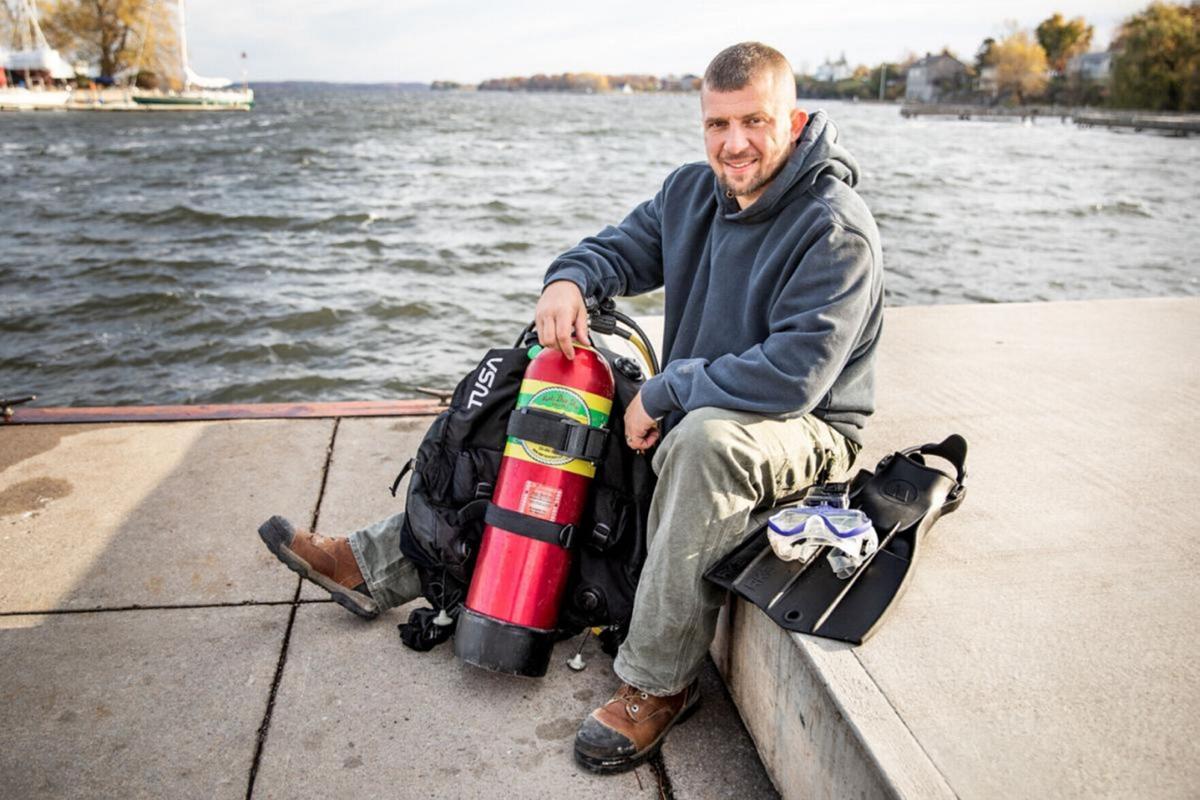 HENDERSON — Speculation surrounds a piece of wreckage sitting below the depths in Ray Bay.

Though one diver believes the piece is from the Martha Ogden steamer, which sank in 1832, others disagree.

In early September of last year, after one of Daniel J. Gildea’s friends mentioned to him that his anchor had gotten stuck on something wooden that appeared to be a dock, he went out to look for himself in the Ray Bay area. He eventually came in contact with what appears to be a side of a wooden vessel.

Hoping to preserve the site and deter others from diving down until scans could be done, Mr. Gildea was not forthcoming at first with the correct location of the wreck. He previously identified it to both the Times and another local diver who was set to scan the site as being in Henderson Bay, when it in fact lies at the bottom of Ray Bay.

“Everybody else thought it was a dock or just some random piece of wood or whatever because that’s all they could see from the surface of the water without a mask,” Mr. Gildea said. “I identified it as a ship and then Prudent Engineering scanned, did bathymetric survey, on it. After that, I told (a seasoned diver) where it was at so that he could go do (remotely occupied vehicle) footage and additional scanning to see if there were any distinguishing characteristics about the wreck site that could help to identify it.”

Intent on putting a name to this wreckage, Mr. Gildea reached out to various sources and perused historical accounts of shipwrecks in old newspaper clippings and online, and narrowed his list down for potential names of the wreck from about 60 or so until he became set on one particular contender: the Martha Ogden. While he remains convinced that the piece of wreckage is from that specific steamer, seasoned divers and those versed in shipwreck identification of the Great Lakes and St. Lawrence River do not necessarily agree with this supposition.

The Martha Ogden was built in Sackets Harbor in 1823 and sank on Nov. 12, 1832, with no lives lost. In November 1832, when it was first reported that the Martha Ogden ship sank, the captain wrote a letter explaining how the ship had left the port of Oswego and a wave came over to the side of the boat and put the steamer out so they couldn’t get the flame to re-light. Forced to go to sails and use the wind, the ship’s crew and passengers continued their trip north. Turning back wasn’t an option because the water was rough.

“... believing, with all on board, that the boat would founder if kept on the lake — she being so water logged, and that all on board would perish, I ran into 8½ fathoms of water and let go both anchors about 9 o’clock,” Captain William Vaughan’s account reads. “She rode about an hour and a half — all hands bailing — when both chains parted within 5 minutes of each other ... My passengers, however, rendered all the assistance in their power, and to their exertions, with my own and crew, and the help of a Divine Providence, we were all saved.”

This letter, among other newspaper clippings detailing the loss of the ship, donated by William R. McNeil, are available through the Maritime History of the Great Lakes website.

According to Mr. Gildea, for him, the only things that remain to be found at this point are the two anchors that were lost out in deeper water, which he thinks will likely be found when National Oceanic and Atmospheric Administration comes to scan for the proposed Lake Ontario sanctuary this summer. Those would be the nails in the coffin, so to speak, confirming his theory, he said.

According to Jennie Lyons of NOAA public affairs, while the Office of National Marine Sanctuaries has expressed some interest in looking at this site, it doesn’t have definitive plans as yet.

After the initial discovery of the wreck, Prudent Engineering conducted a survey of the site, which included a bathymetric survey to show depth of water and height of the object, a three-dimensional scan of the wreck and a side scan sonar “structure scan,” which Mr. Gildea said helped him in narrowing things down.

While other local divers and those versed in researching and identifying — to the best of their abilities — shipwrecks in the Great Lakes and the St. Lawrence River do not agree that the wreck could be part of the Martha Ogden due to the fact that there’s a length discrepancy of about 20 feet, and there’s no evidence of the piece belonging to a steamer, Mr. Gildea remains convinced and has his own answers for both points.

He continued by saying anytime one is dealing with old ships, there’s no way to positively identify a ship based on length because it depended on where the ship was built, who measured it and how they measured it. He believes this is the starboard side, so from point to point it measures in at about 125 feet, and then the keel would be about 100 feet.

Another reason he’s convinced it’s the steamer is what he said looked to be steel plates that are attached to the inside of the side of the wreck, like those that would align with the axles that would carry the steam wheel on the opposite side.

In the late season, with the water becoming more dangerous, he said he couldn’t dive on it and positively identify exact footage locations of those plates within the ship to determine that design build.

Carrie E. Sowden, archaeological director for the National Museum of the Great Lakes based in Ohio, was sent an underwater video of the wreckage in Ray Bay to review last fall and was told it was 125 feet long. In accordance with what seasoned divers and those well versed in shipwreck identification in the area, she said the wreckage appears to be the side of a ship.

She noted that there was a very specific way one measured ships, and while that did change over time, it didn’t change between ports and a 104-foot ship would not show up in records as 125 feet long. She said a difference of 20 feet would not have happened, and that the ship side appears to not be fully intact end to end, indicating that the entire vessel may have been even longer.

As for the possible steel plates, while she said it had been a while since she looked at the video, Mrs. Sowden said she didn’t remember seeing a whole lot of extra structure or strengthening kinds of things. She noted that a steam engine was not going to be connected to the sides of the vessel, it would have been rooted in the bottom.

“When you go and try and identify a shipwreck in the Great Lakes, very rarely are you at 100 percent determination,” Mrs. Sowden said. “That being said, I think you can be at a 99 percent determination. Part of that is because there’s no giant name, unless you can find the name board on it, you’re still just putting a bunch of clues together and making suppositions. It sounds to me like the suppositions that (Mr. Gildea) is making don’t seem to add up to what is sitting there.”

Mrs. Sowden has been with the National Museum of the Great Lakes working exclusively on the Great Lakes for almost 17 years. She noted that while she has seen a video of the wreckage, Mr. Gildea has been on the site and does have that first-hand knowledge.

Originally from Pennsylvania, Mr. Gildea had done recreational diving in the past while stationed with the Army in Guam, so once he was sent to the Fort Drum area, he decided to pursue freshwater diving. Mr. Gildea now works for Prudent Engineering in Syracuse.

Mr. Gildea said that in identifying the wreck, to his satisfaction at least, it’s a relief that no one died on the ship. He also noted that he was wrong in his initial assumption. He believes now that it’s actually not the bottom of the ship, but the entire starboard side on display below the depths.

In underwater footage of the wreckage, dive markers can be seen attached to the piece, indicating that it had been known by locals in the area for quite some time before Mr. Gildea dove on it.

Eugene “Gene” Kardelis has lived on Rays Bay Road in Henderson for more than 20 years and is familiar with the wreck site. He said he believes the wreck is a piece of a barge and that, from the surface, you can count the planks on it on a clear day.

“A barge has wood on it, and slats that go the width of the vessel,” he said. “You can see actually the planks on a calm day. If there’s no ripples in the water, you can look down, you’ll see the barge and you’ll even see fish swimming around it.”

Mr. Kardelis, who used to be a captain of a small vessel, said he knows a lot of people fish overtop of the wreckage and have been doing that for at least the 25 years he’s lived in the area. He has also seen divers out there with markers out to let fishermen know they’re down there and to not get too close.

“I’ve seen it many times. We used to fish right over top of it because it’s a good for the fish when they congregate there,” he said. “Usually it’s smallmouth bass that the guys are fishing for around there.”

While 100% positive identification on any shipwreck in Lake Ontario, or the St. Lawrence River for that matter, is near impossible because there are no names on the sides of these ships to identify them beyond a shadow of a doubt, Mr. Gildea said that for him, all signs point toward the Martha Ogden as the wreck he came across.

He has said it will probably be May or June when he goes back out to look at the remains of the ship again.

“I think people going out and finding things and doing their own research is a good thing,” Mrs. Sowden said. “The thing with doing research is you always have to keep an open mind, you can find what you think is an answer, but it’s like science. You can do experiments to prove you’re right, but you also have to do experiments to disprove yourself. You have to make sure that it stands up to everything.”